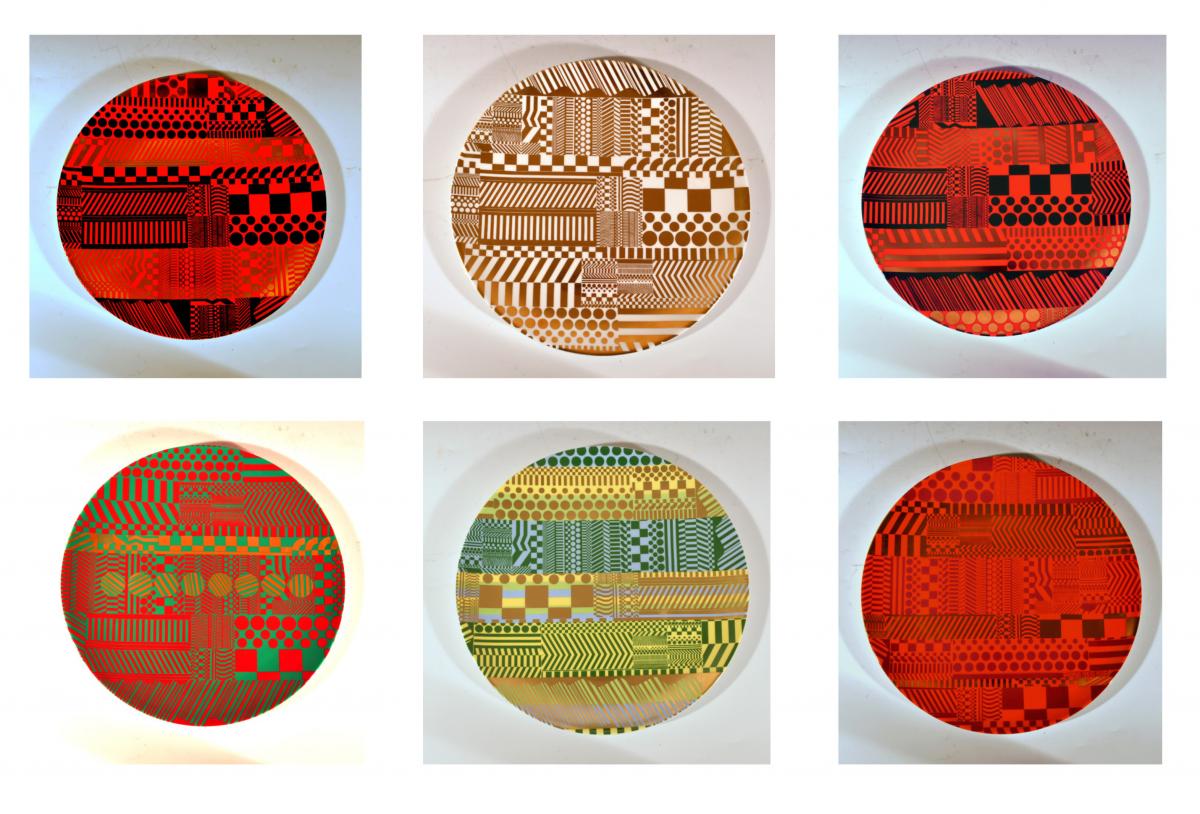 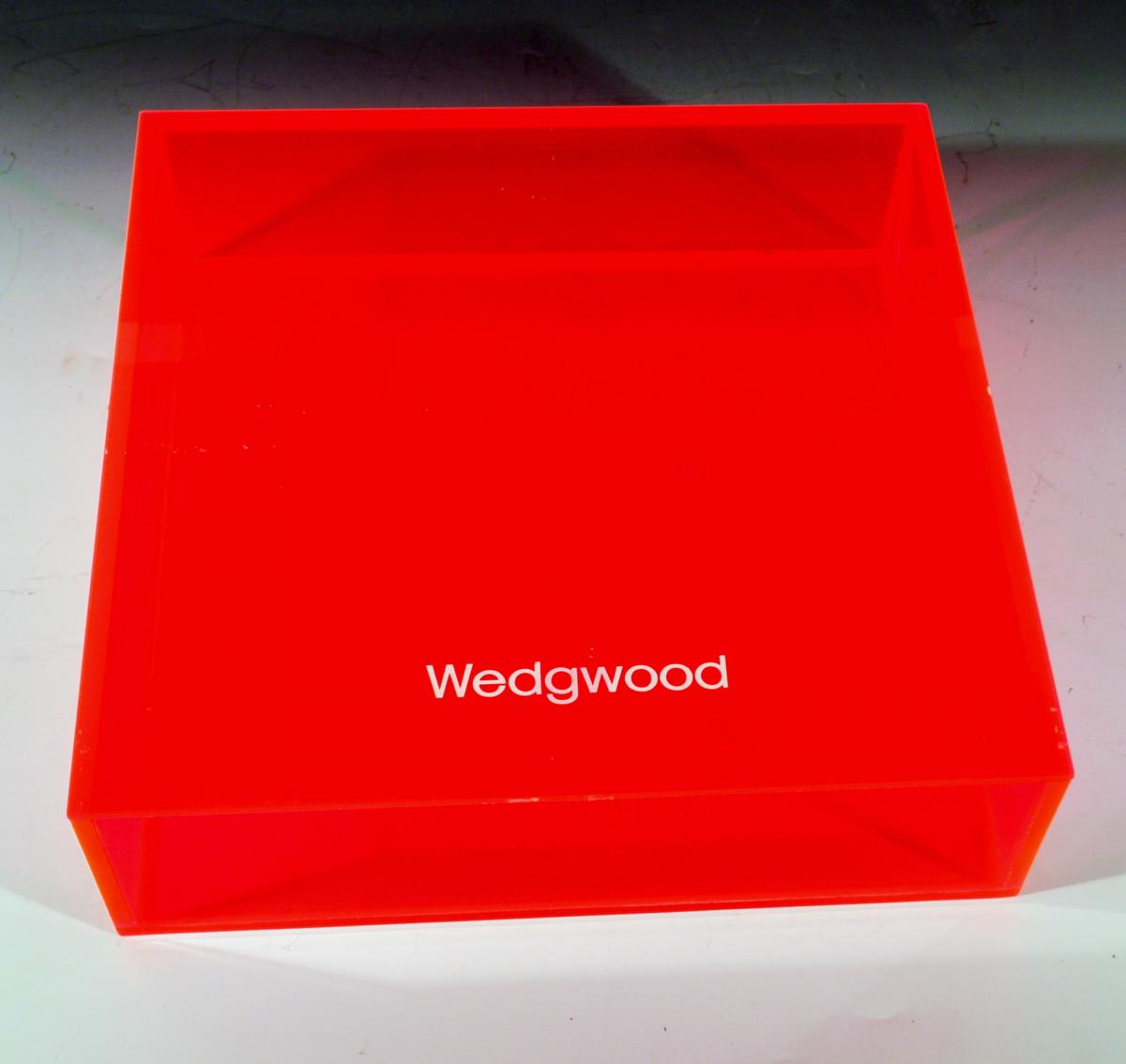 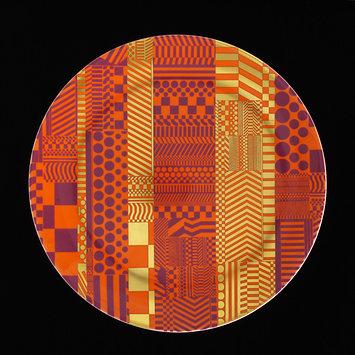 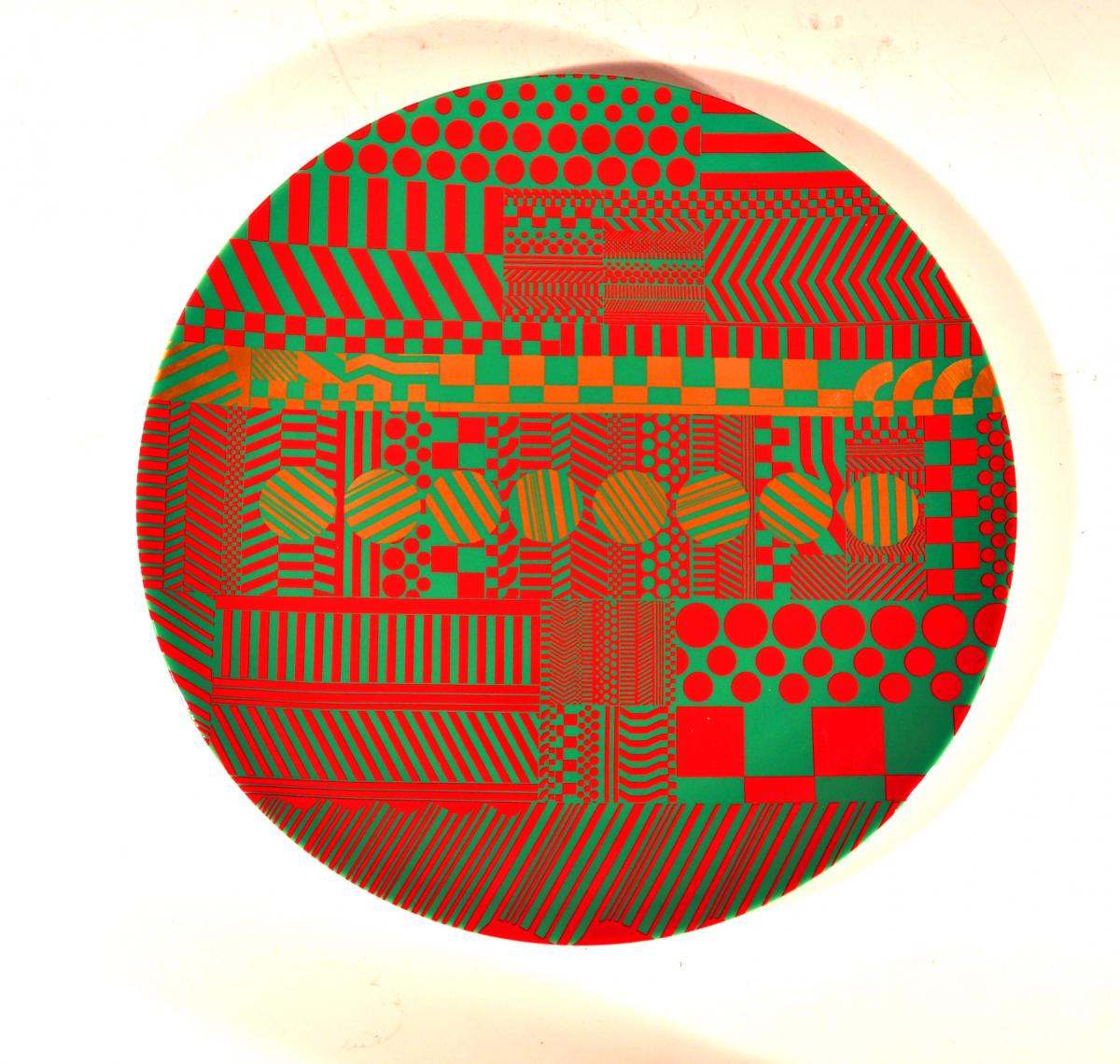 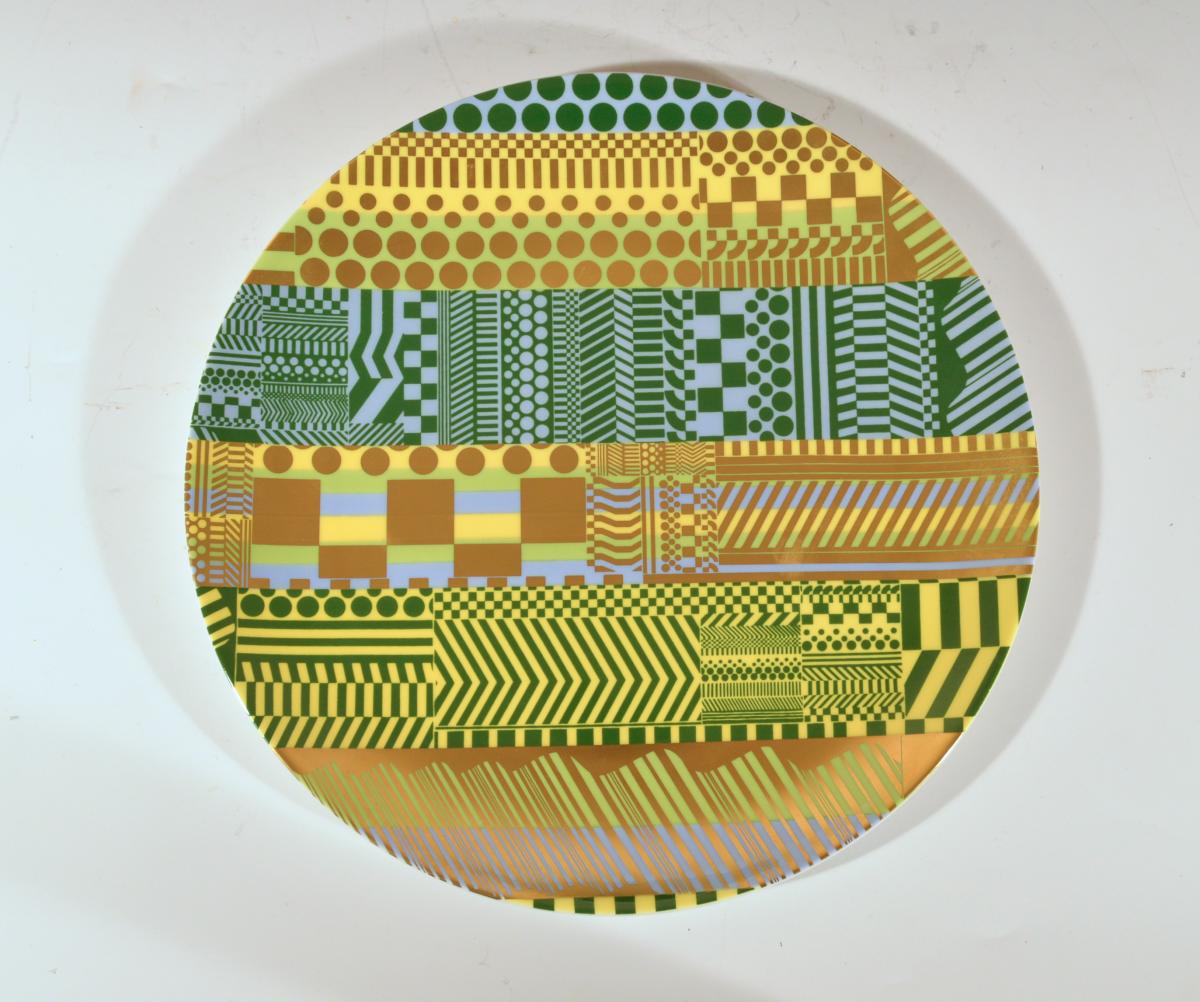 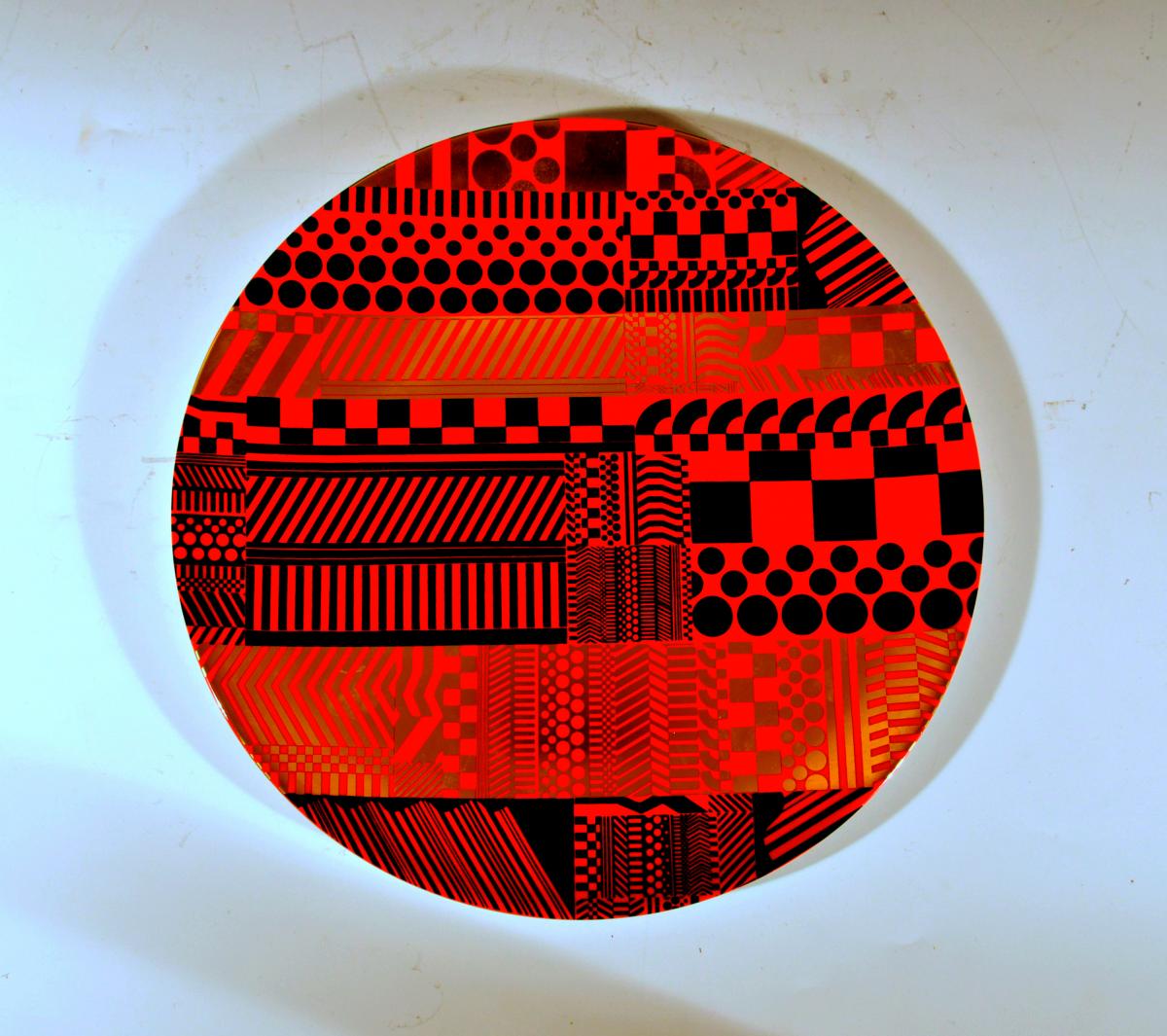 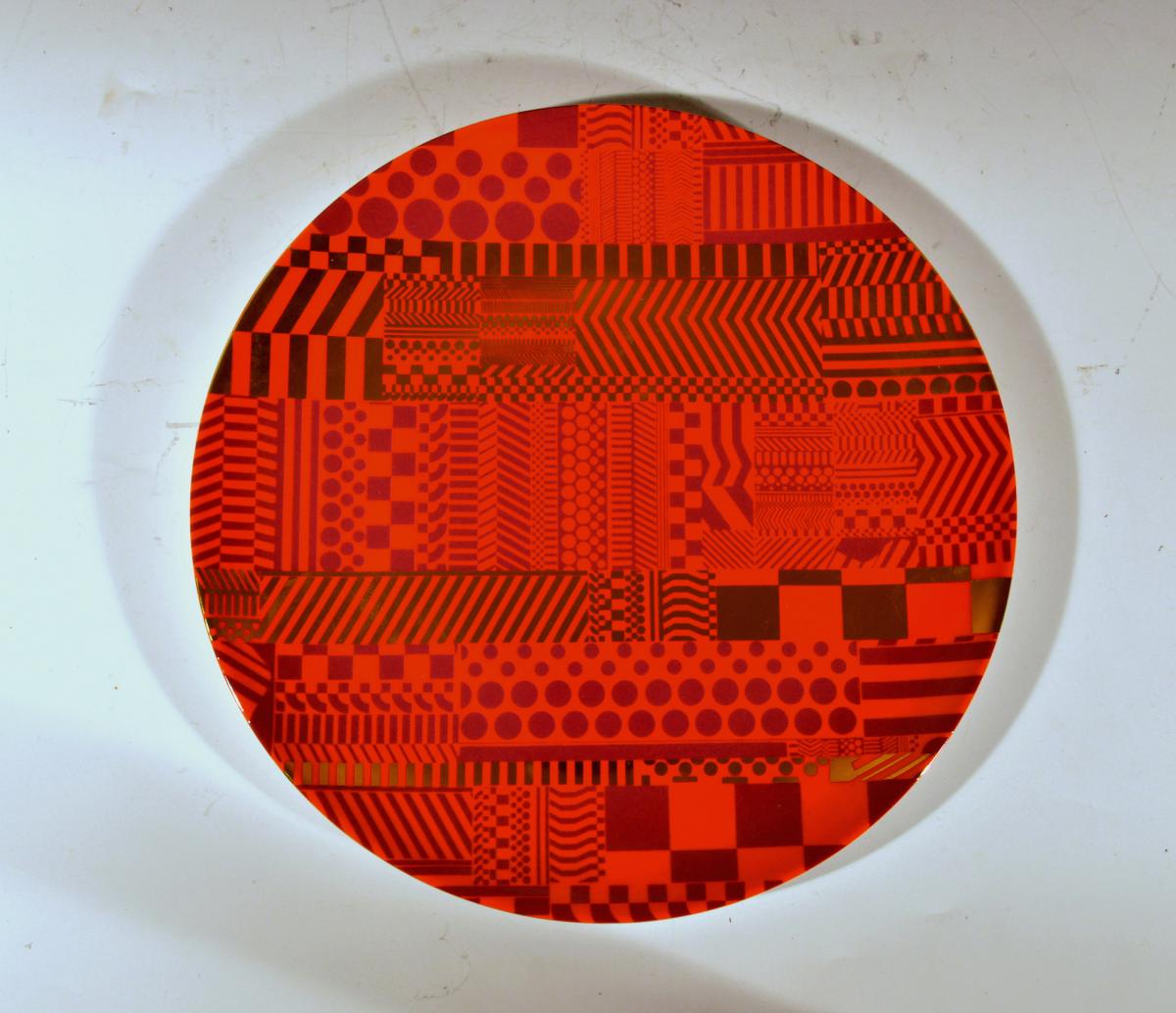 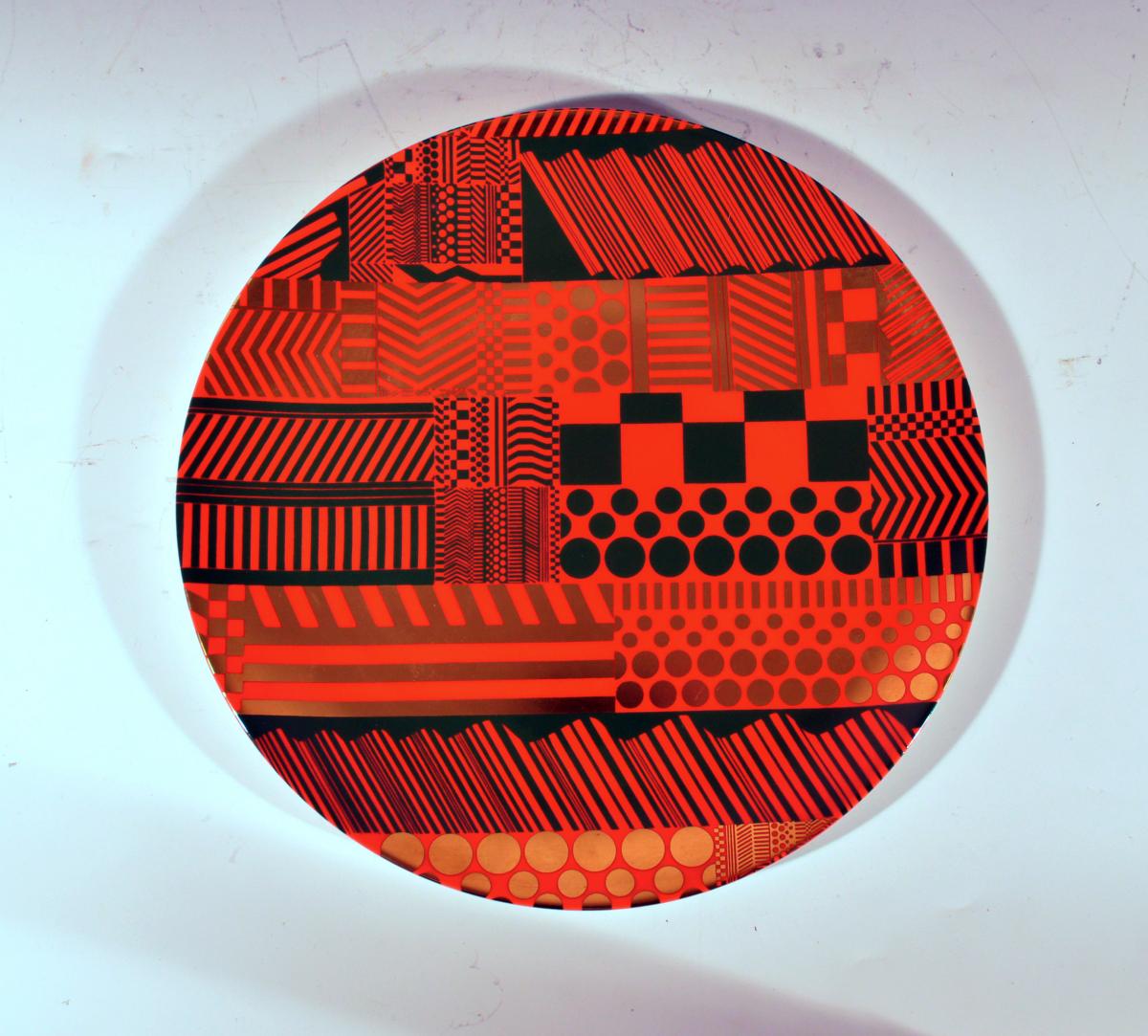 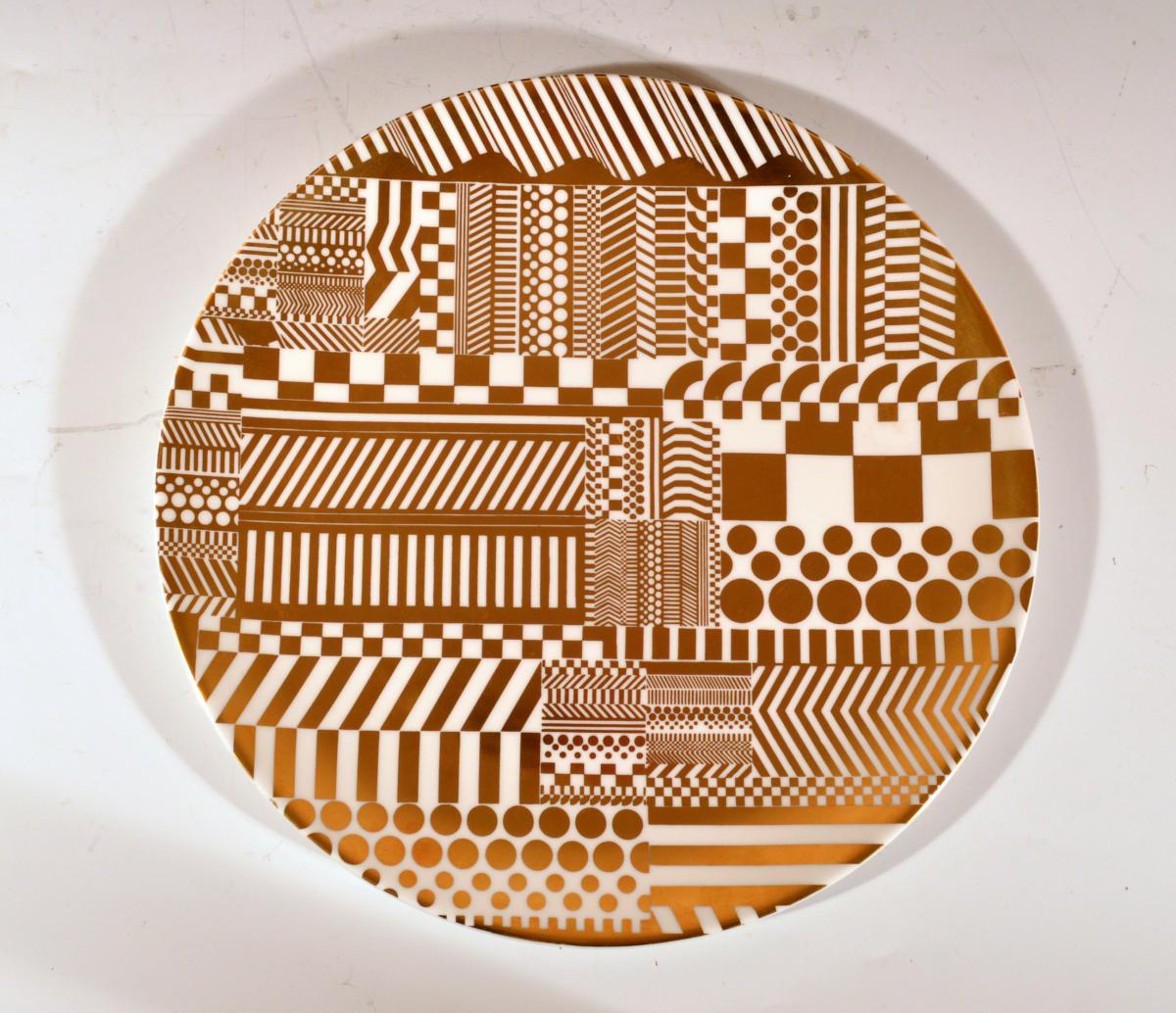 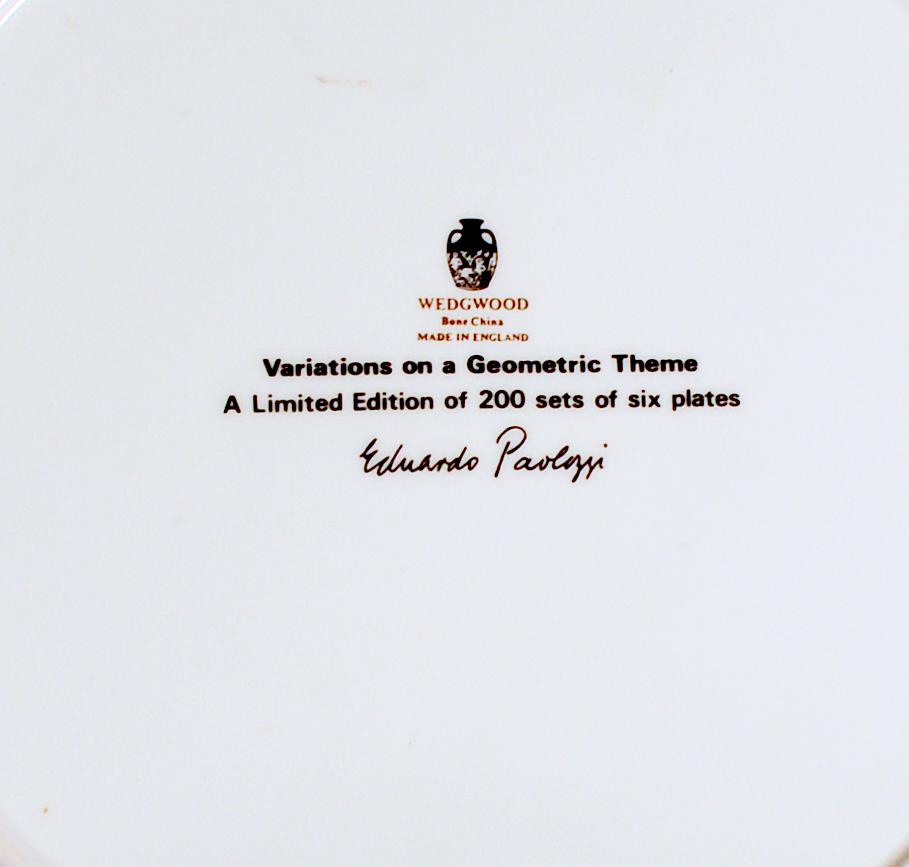 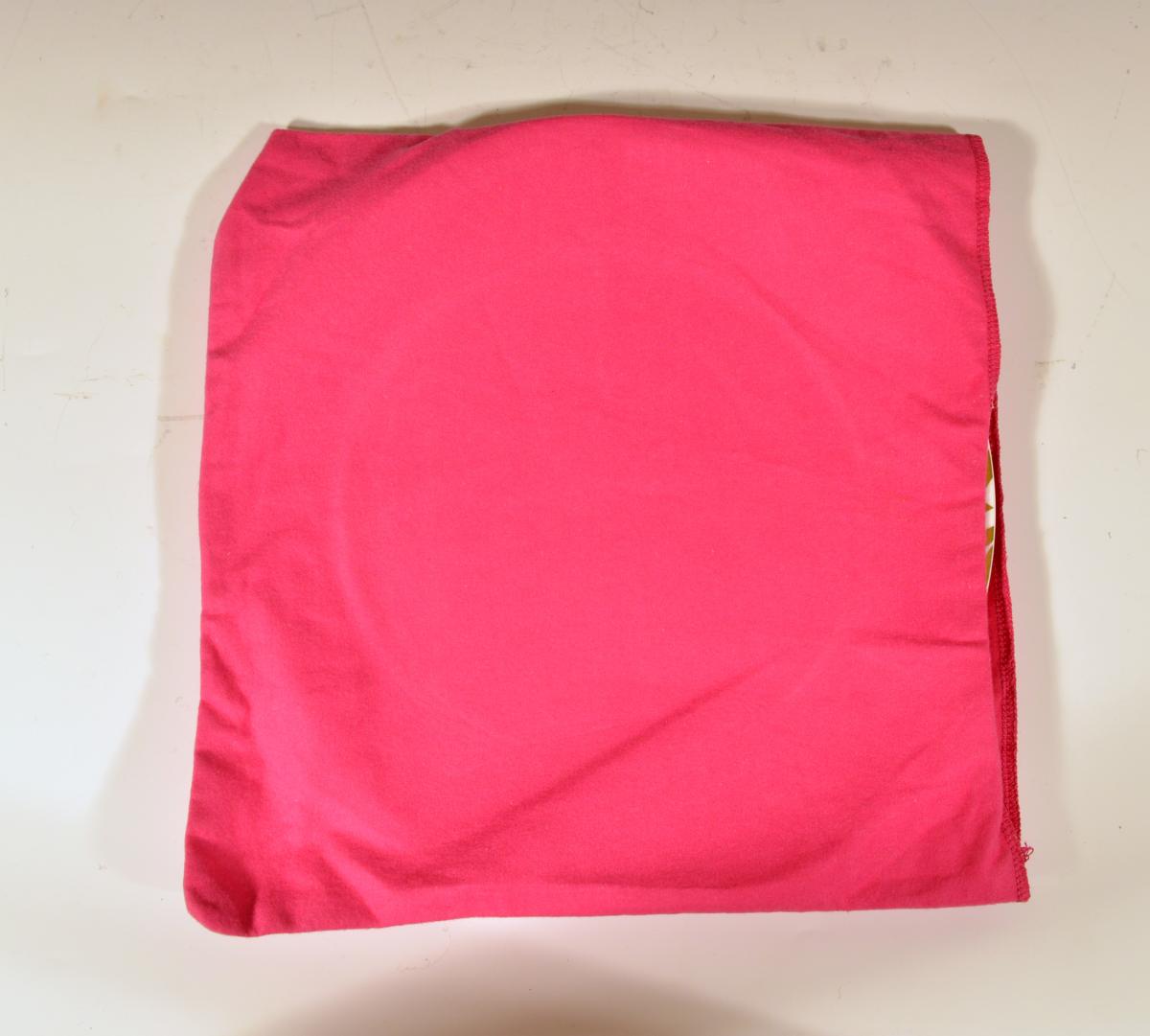 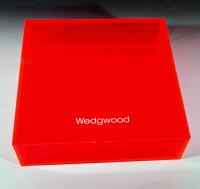 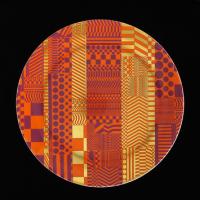 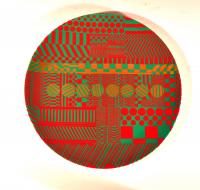 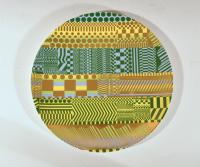 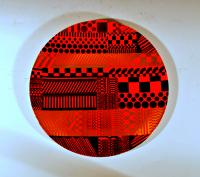 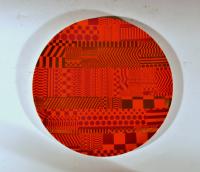 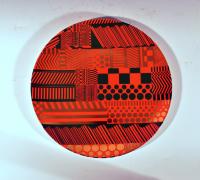 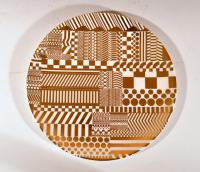 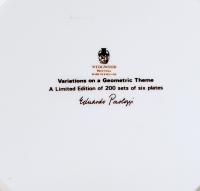 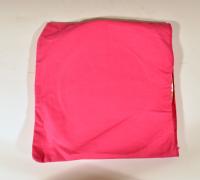 Complete Set of Six-One of only Two Hundred Sets Made. With Lucite Box.

The Eduardo Luigi Wedgwood collaborated with the artist in this venture to produce a limited edition of 200 sets of fine bone china plates with decoration designed by Paolozzi. The project extends the artist's own interest in print techniques and the production of variations of the same theme, and the effects of different forms of printing on an image.

The Sir Edwardo Paolozzi porcelain plates are of bone china with vertical bands of patterns which include stripes, zigzags, and circular patterns in red, black and gold.  The effect of a complex, multi-sectioned surface was achieved with the screen-printing rather than the traditional painting on ceramics.

The six plates are kept within their original pink slipcovers and plastic bags marked Wedgwood and are within a pink Perspex box and cover marked Wedgwood.  One side of the box has a section out and repaired back.   Note the gold on the plates does not display well in the photos.

Professor Sir Edwardo Luigi Paolozzi CBE FRA (1924-2005), was a Scottish sculptor and artist. Largely a surrealist, Paolozzi came to public attention in the 1960s by producing a range of striking screenprints - the medium which he used for the design of these plates. His works include the mosaic patterned walls of the Tottenham Court Road tube station and the 'Piscator' sculpture outside Euston Station. Paolozzi once stated that as an artist it is sometimes difficult to draw a line between 'art' and 'craft.' Despite being best-known as a sculptor, in 1968 Paolozzi was appointed visiting tutor in the Ceramics Department of the Royal College of Art, a post which he held until 1989 when he was appointed Visiting Professor.

Plates in excellent condition. The lucite box has a u-shaped section off/on on on side 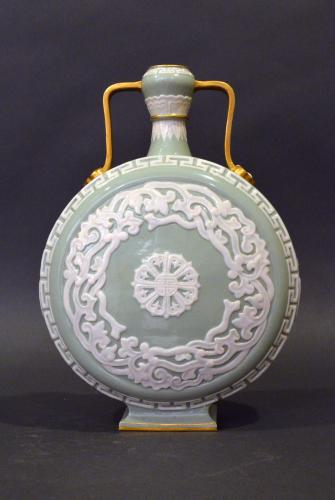 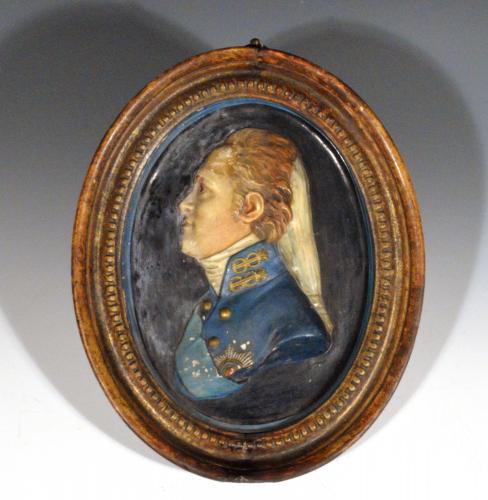 Terracotta Plaque of a man wearing The Order of the Garter
Earle D Vandekar of Knightsbridge, Inc 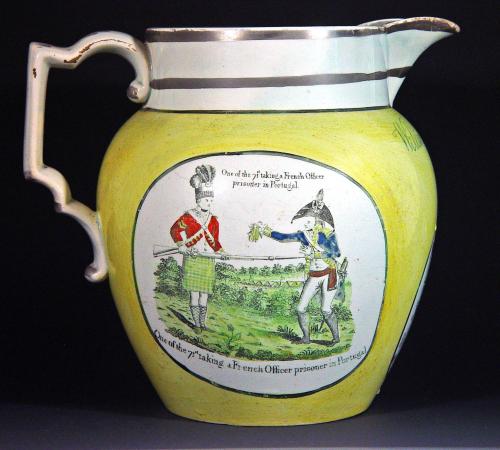