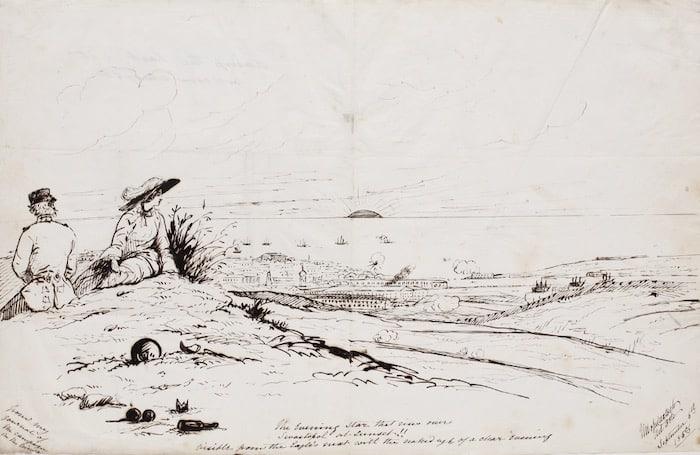 Sebastabol: The Evening Star that rises over Sevastapol at sunset

Signed and dated l.r.: HHopeCrealock/…18../September.6th/1855/The Evening Star that rises over/Sevastapol at sunset!!/visible from the Eagle’s nest with the naked eye of a clear evening/from my/ journal of/ the campaign/ in the Crimea

Inscribed verso’ damp the back of it/will come straight

The second son of William Belton Crealock of Langerton in Devon, the artist started at Rugby in February 1844 and obtained a commission in the 90th Light Infantry on 13 October 1848. He was promoted to lieutenant on 24 December 1852 and captain on 29 December 1854.

He landed at Balaklava on 4 December 1854 and served at the siege of Sebastapol. He was mentioned in despatches for gallantry during the attacks on Redan on 18 June and 8 September the following year and was appointed deputy adjutant quartermaster-general at headquarters on 17 September and at Constantinople in December.

He served in India in the campaigns of Rohilkhand, Biswara and Trans Gogra in 1857, and from 1858-9 on the staff of Sir William Rose Mansfield.

In March 1860 he was appointed military secretary to Lord Elgin he was during his Chinese embassy. He was attached to the headquarters of the army during the war that followed and was present at the action of Sinho, the capture of the forts at Tangu and Taku and the capture of Peking; and received a medal with two clasps. On 6 July 1864 he received his colonelcy, and on 2 January 1870 was gazetted major-general.

Crealock retired from the army on 4 September 1884 with the rank of lieutenant-general.

Crealock was an accomplished artist who made sketches of scenes in the Crimean War, the Indian mutiny and the China campaign which are valuable records. He sent many sketches of the Zulu campaign to the Illustrated London News. He illustrated Wolf-Hunting, or Wild Sport in Lower Brittany (1875), and George Whyte-Melville's Katerfelto (1875).

In 1885 he republished a series of papers which had appeared between 1870 and 1879 on 'The Eastern Question' (London), written from a point of view hostile to Russia. At the time of his death, Crealock was engaged on illustrating his work Deer-Stalking in the Highlands of Scotland, which appeared in 1892 under the editorship of his brother, Major-General John North Crealock (1837–1895).