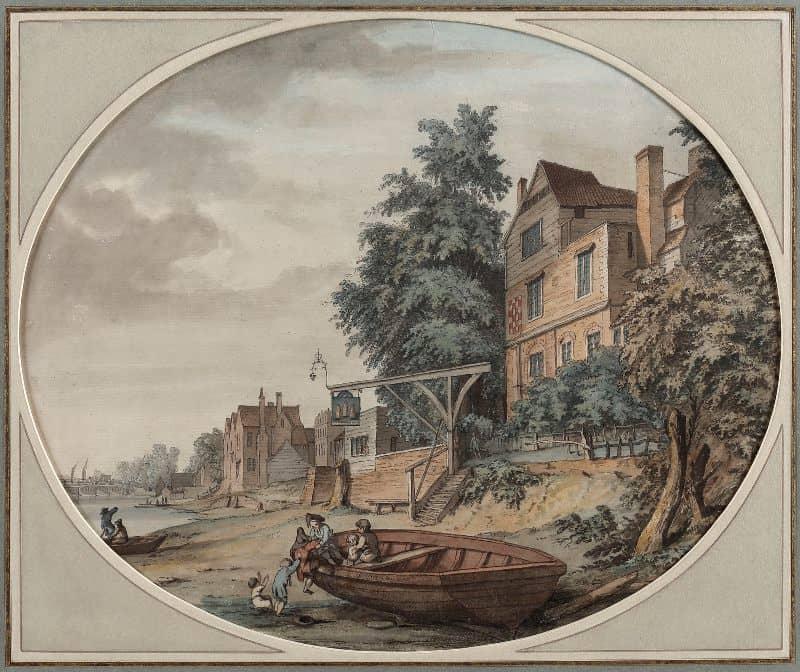 Grimm was born in Switzerland and moved to London in 1768 having spent three years in Paris. He made a number of views along the Thames shortly after his arrival in the capital. This view is taken slightly upstream from the wooden Fulham Bridge, which is visible in the drawing with a stage coach crossing.

A further smaller view of the Berkshire House in 1772 with its distinctive sign by the waterside steps is recorded with the title ‘a view from Putney up the river’ (7 1/8 x 8 1/4 inches in the J. Braithwaite collection); this work is recorded as having been based on a study (Rotha Mary Clay Samuel Hieronymous Grimm, 1941, p. 66).

This bridge was opened in 1729 in line with Fulham High Street with a slight curve on the Putney side in front of the church. The British Museum has a sketchbook by the artist of Thames views from Fulham to Kew (1919.7.12.25).

In 1957, Athelhampton House was bought by the eminent surgeon Robert Victor Cooke to house his extensive collection of 16th- and 17th-century furniture, paintings, tapestries and carvings.

Following his wife’s death in 1964, he gave the house to his son Robert Cooke MP (later Sir Robert) on his marriage to his wife, Jennifer King, in 1966. Their son Patrick inherited the house in 1995.