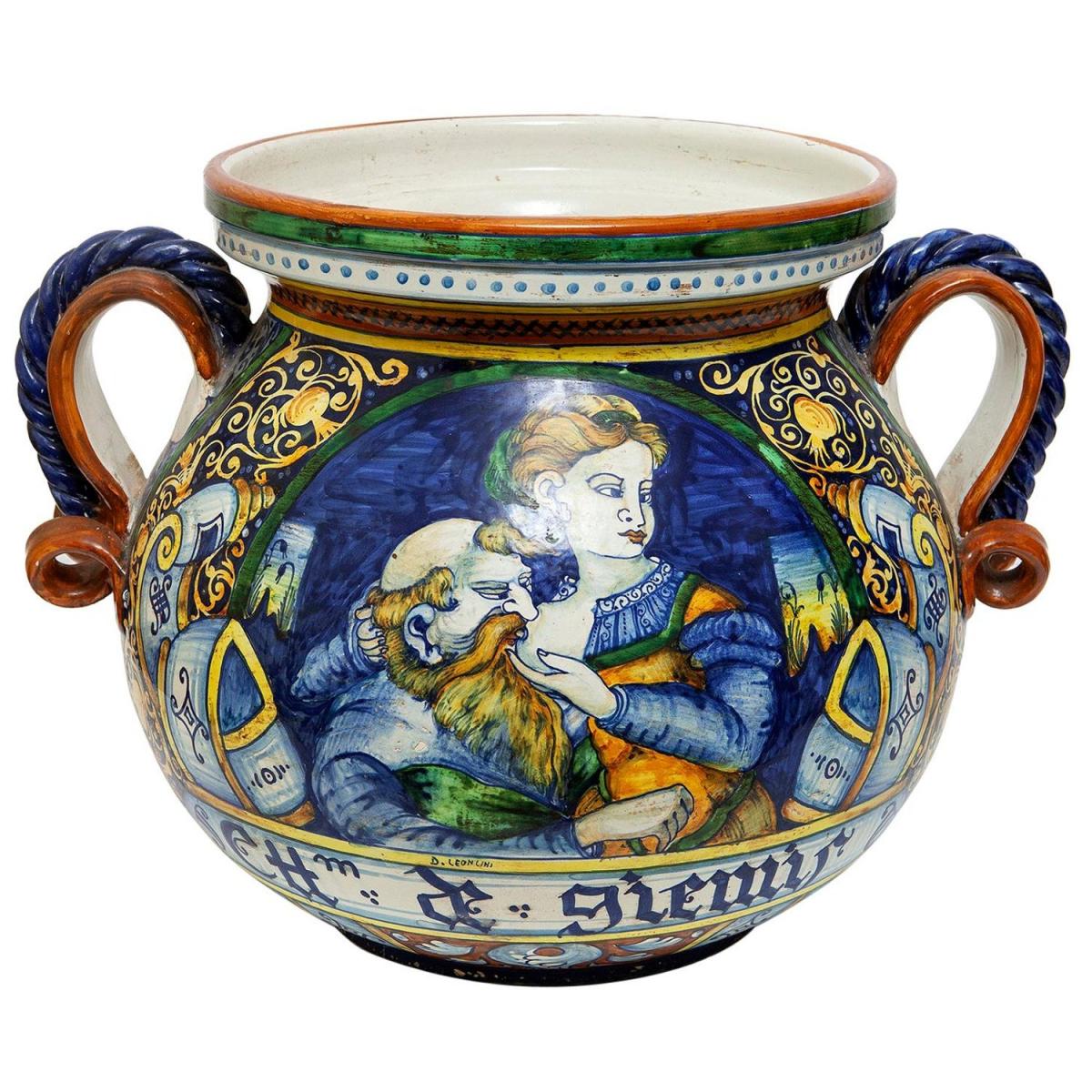 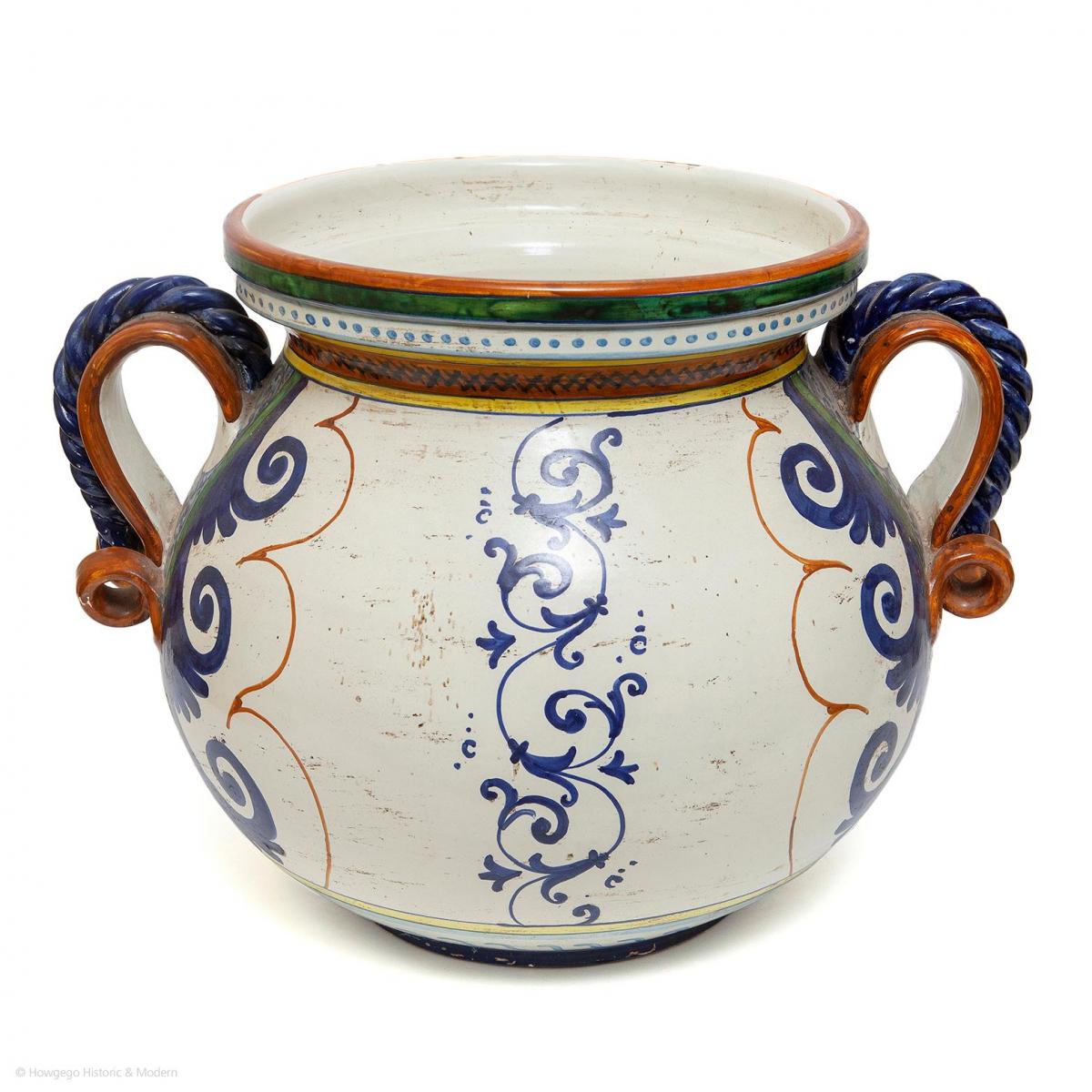 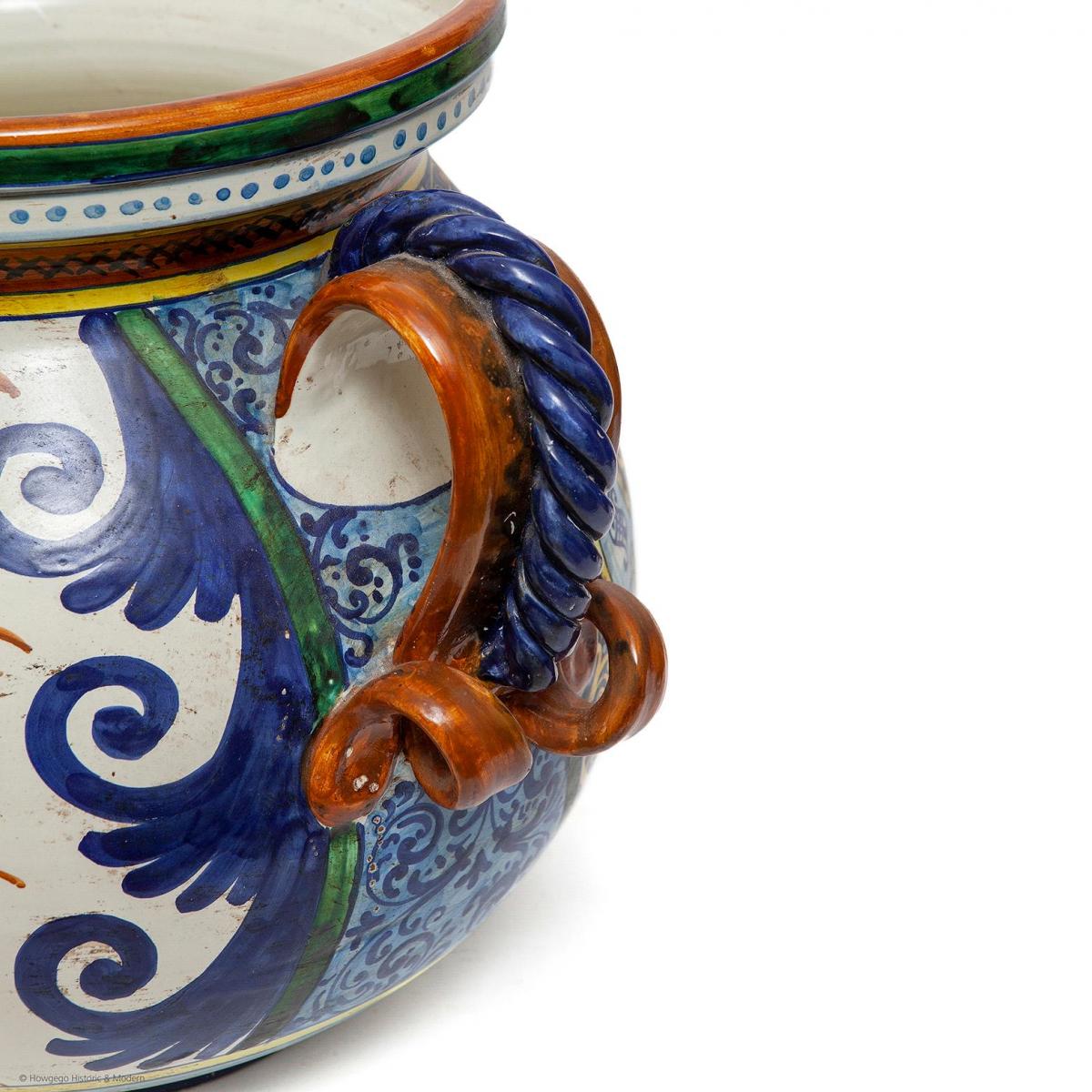 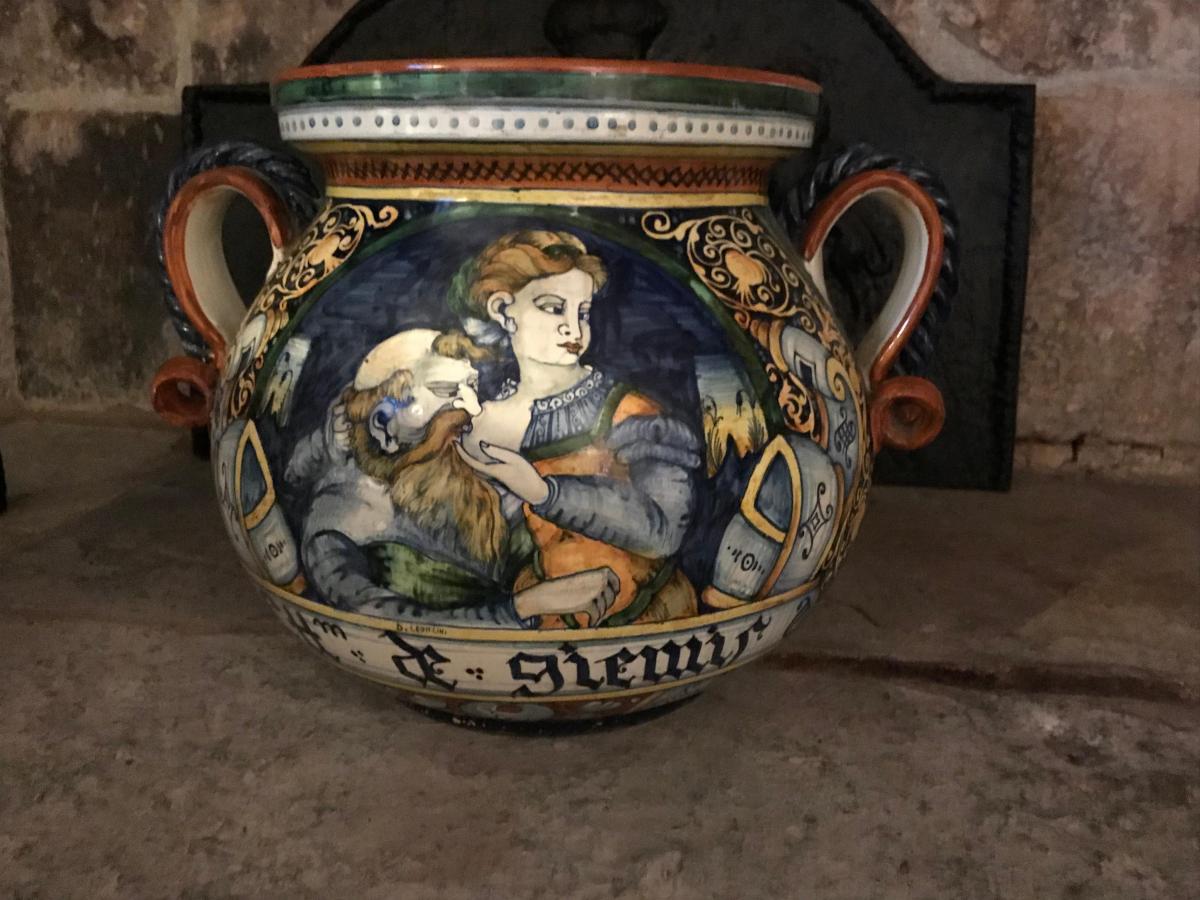 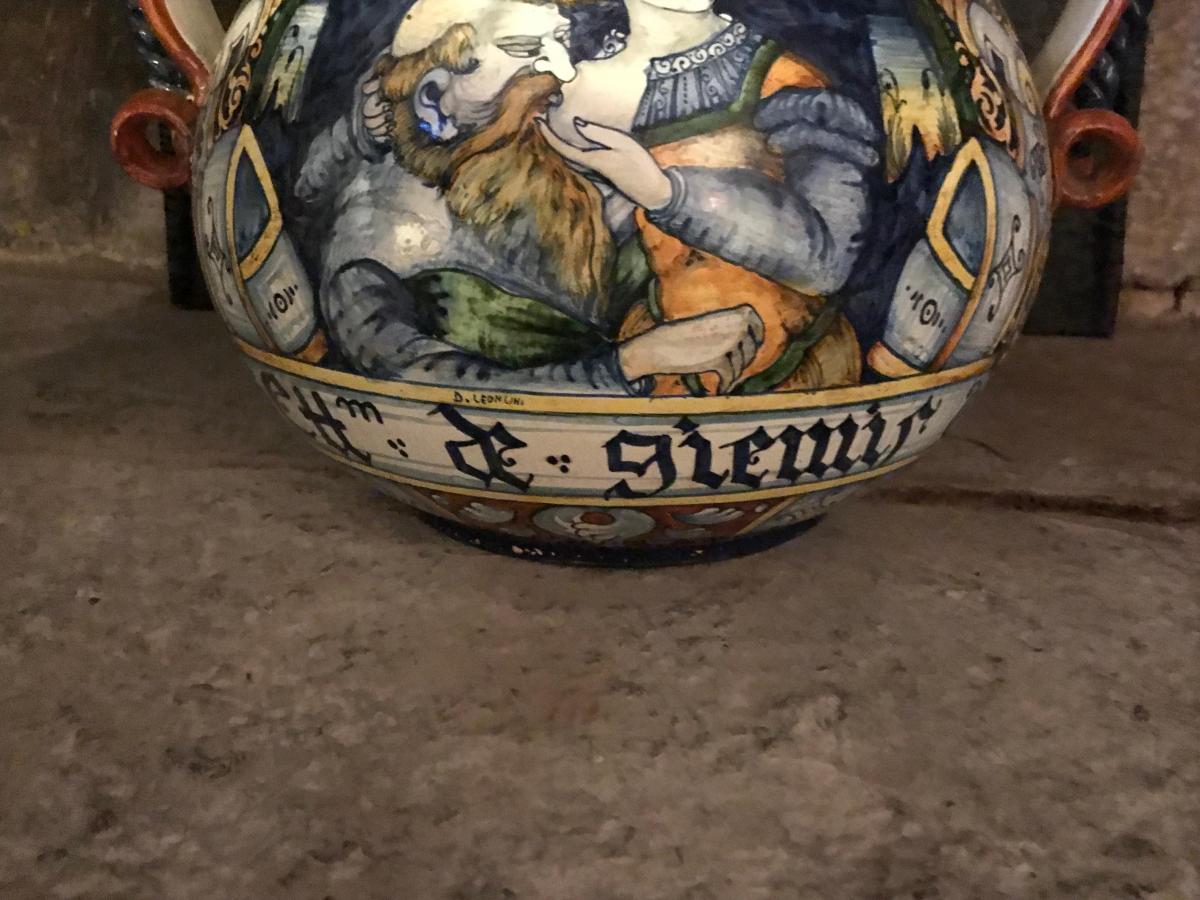 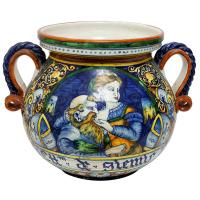 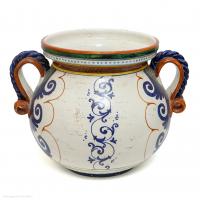 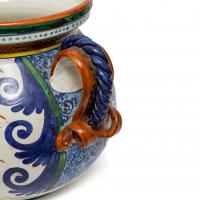 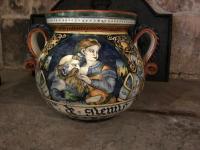 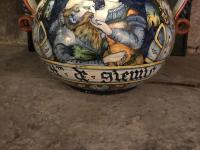 - This stunning, massive, flower vase is a wonderful statement and conversation piece.
- It is beautifully thrown and painted by one of Italy's leading family potteries.
- Roman Charity is history’s most altruistic legend of honoring your parent.
- Versatile and looks fabulous, whether filled with flowers or plants or not, in any spot, the fireplace, in a corner, on a table.

A large Italian Faïence majolica two-handled jar decorated by D. Leoncini, with a depiction Roman Charity in which Pero who secretly breastfeeds her father Cimon who was starving to death in prison.

This story of Pero and Cimon is registered in Factorum ac dictorum memorabilium by an ancient Roman historian Valerius Maximus. It is believed in the Romans that this story is related to the mythological story of Juno’s breastfeeding of the adult Hercules.

Throughout time paintings, writings, novel and more recently movies have depicted Roman Charity in one form or another. The wall frescoes and paintings excavated from Pompeii revealed the visual representations of Pero and Cimon and artists such as Carravagio & Rubens also popularized this visual language.

One of the most important families in the medieval town of San Gimignano, the pottery of Leoncini has for generations practiced with the wisdom and expertise of the old ceramic masters recreating ancient designs with skill, great care and ability.

Provenance: Private Collection, by descent, acquired on a Grand Tour of Italy