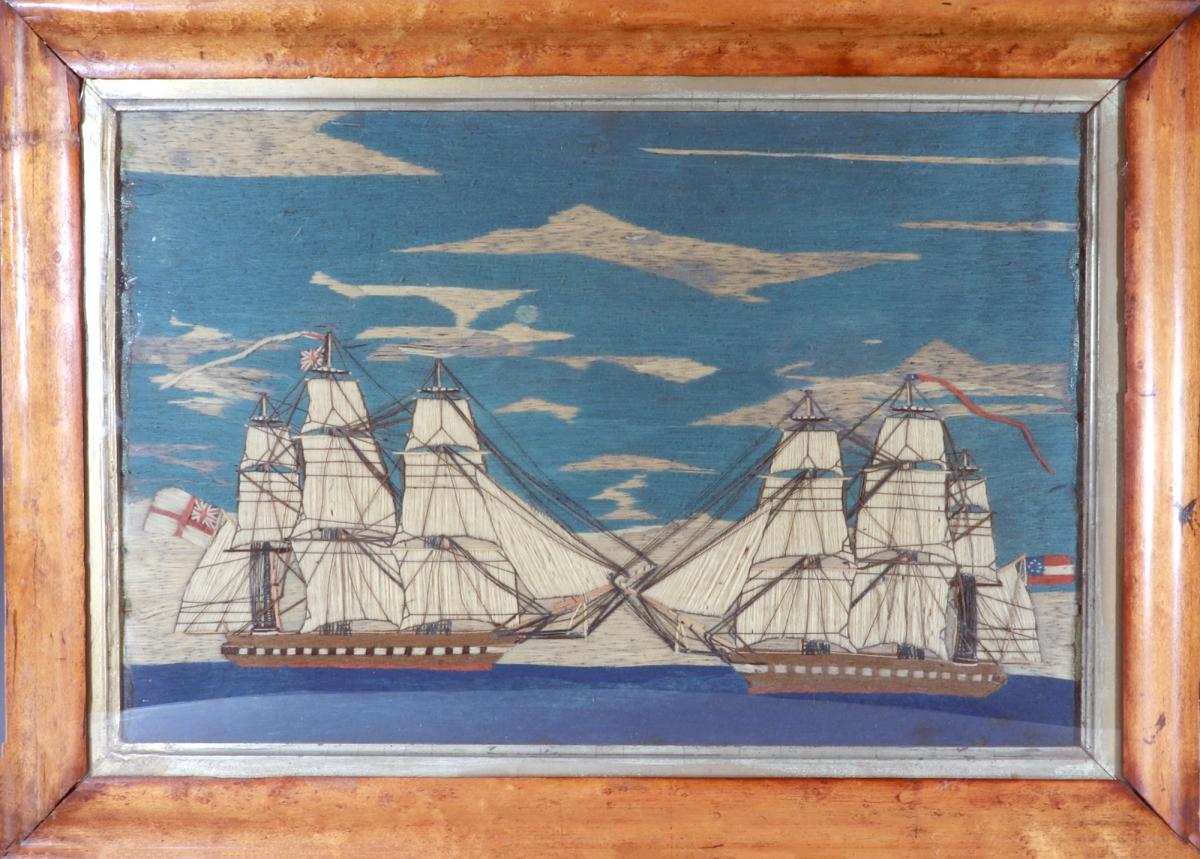 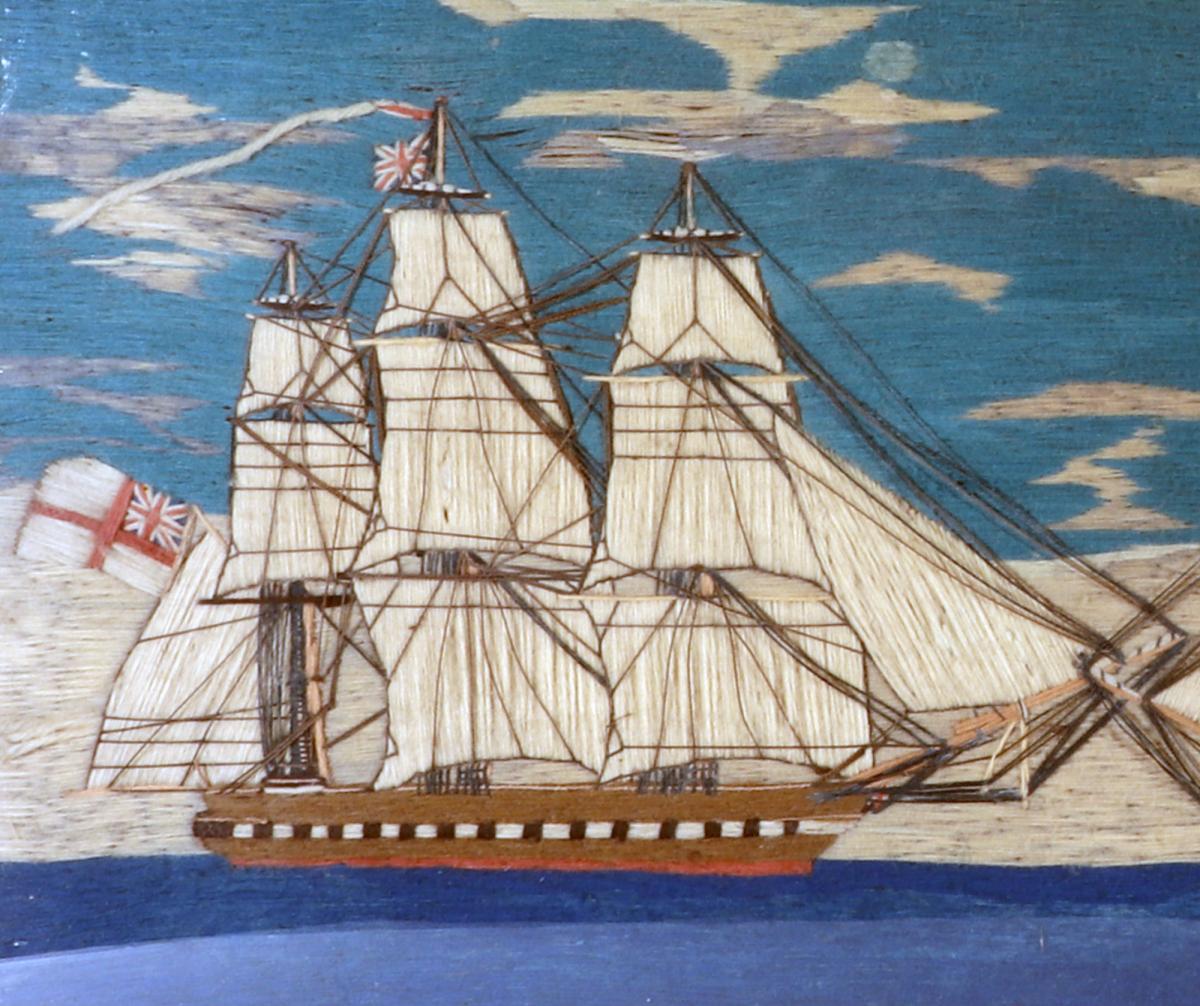 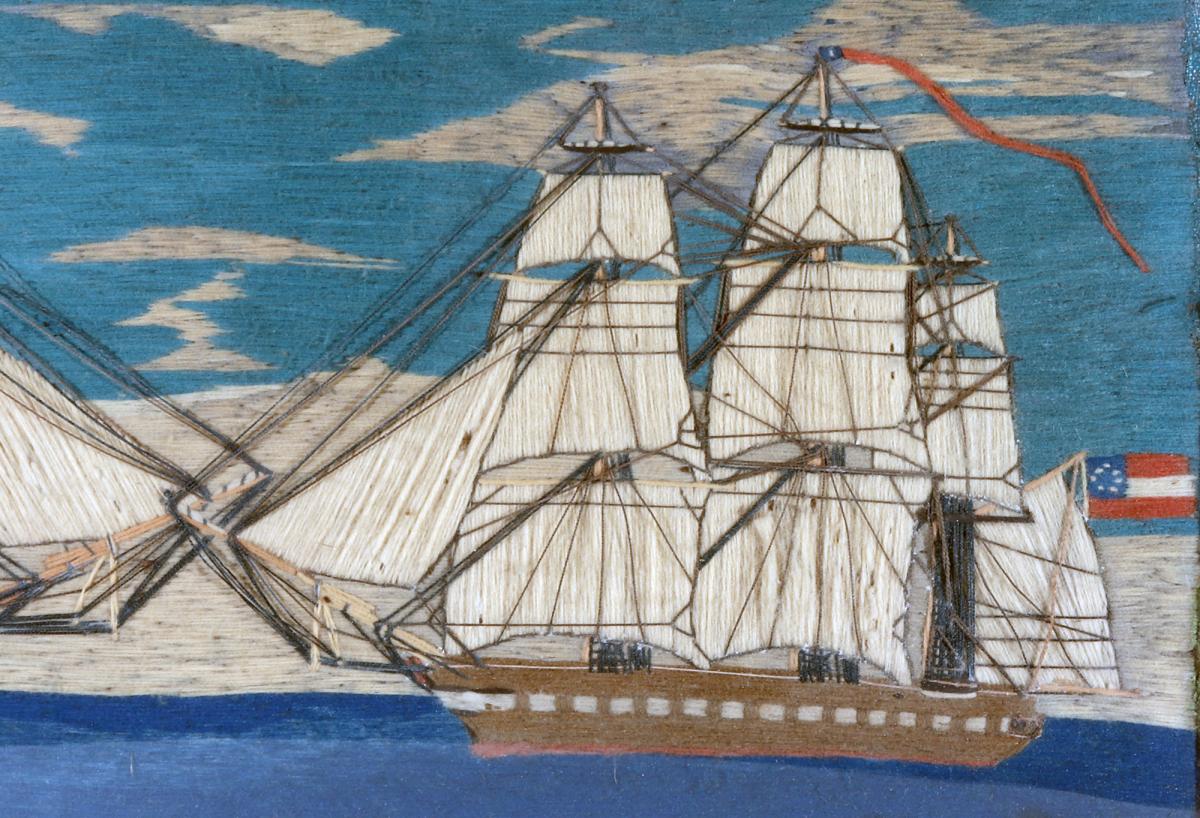 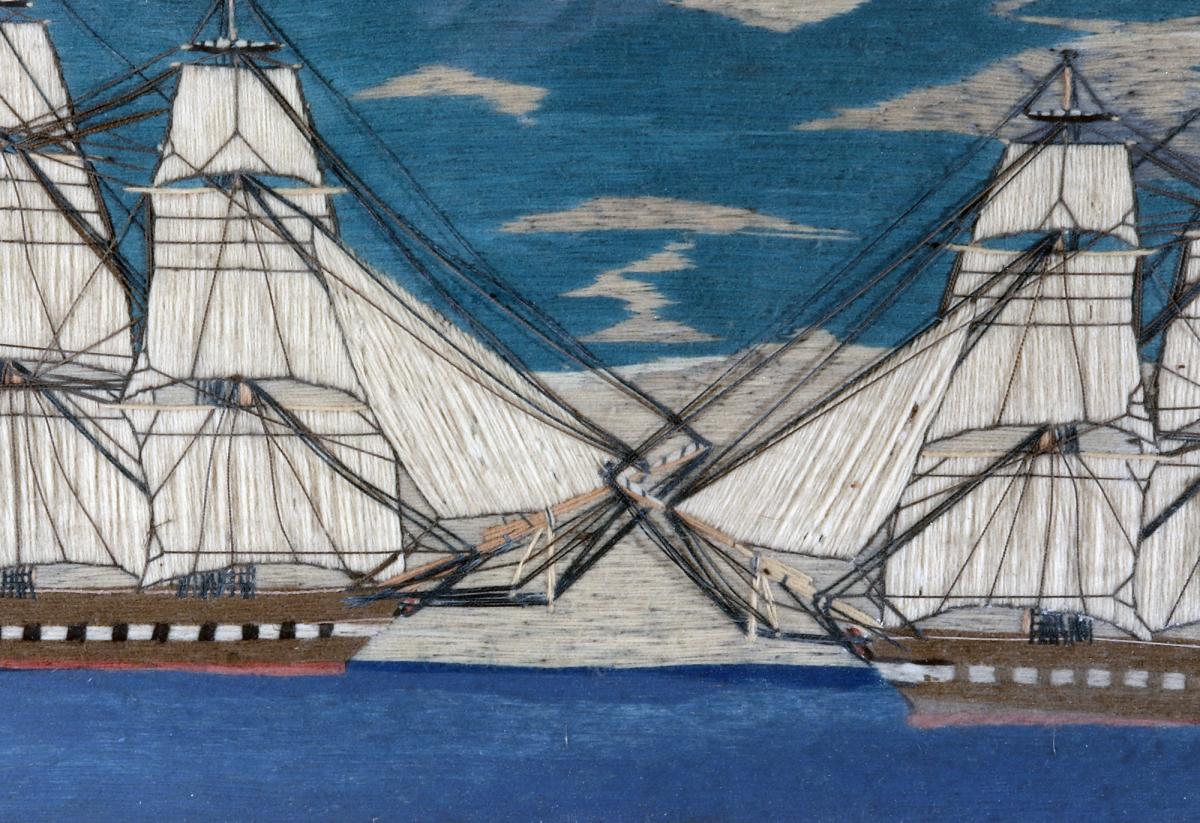 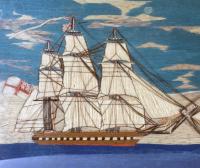 Sailor's Woolwork of A Confederate and British Ship Passing on the High Seas.

The British sailor's woolwork depicts two ships under full sail passing on the high sea.  One ship flies the White Ensign and the Union Jack from the Main Mast while the other flies an early Confederate flag, the First National Flag- "The Stars & Bars".

The Confederate ships were built in Liverpool, England. Forty two blockade runners, ships to outrun the Northern Union naval blockade placed on Confederate ports, were built on the River Mersey for the Confederacy, including the SS Banshee, the first steel hulled ship to cross the Atlantic.

Reference: Used from 1861-1863, this is is the Confederate 1st National Flag, the Stars and Bars. It was first flown over the Capitol building in Montgomery, Alabama on 4 March 1861, where the first seven states of the Confederacy met to create their government.

The first official national flag of the Confederacy, the “Stars and Bars”, was adopted March 4, 1861, and served until May 1, 1863, when it was replaced with the second national “Stainless Banner”.

Designed by German/Prussian artist Nicola Marschall in Marion, Alabama, the 1st national flag resembled the flag of the Austrian Empire. This first version of the flag had 7 stars in the blue field representing the 1st 7 states to secede from the Union (South Carolina, Mississippi, Florida, Alabama, Georgia, Louisiana, and Texas). On May 21, 1861, 2 stars were added after Virginia and Arkansas seceded. North Carolina and Tennessee were the final 2 states to secede and 2 more stars were added on July 2, 1861, bringing the total number of stars to 11. On November 28, 1861, 2 more stars were added to the flag, representing Kentucky and Missouri, although those states never officially seceded from the United States. The 13-star National flag served until May 1, 1863.

The Provisional Confederate Congress was charged with creating the National Flag and Seal. The committee asked the public to submit thoughts and ideas on the topic and was, overwhelmed by requests not to completely abandon the flag of the United States (stars and stripes). Because of the popular support for a flag resembling the U.S. flag, the stars and bars design was approved by the committee. When war broke out, the “stars and bars” caused confusion on the battlefield because of its likeness to the U.S. flag, especially when it was hanging down on the flagstaff with no breeze. This confusion along with considerable criticism from other Confederates eventually led to the “stars and bars” being replaced by the “stainless banner”.

Liverpool
(https://ldhi.library.cofc.edu/exhibits/show/liverpools-abercromby-square/britain-and-us-civil-war/supplying-warships)
The Confederacy had almost no navy when the war started, so southern leaders sought warships to attack and defend against the North. The Confederacy also needed merchant ships to evade the Union blockade and run arms and other essentials into southern ports. In Liverpool, they found both.

James Dunwoody Bulloch, the Confederacy's chief foreign agent in Great Britain, led this effort to obtain Confederate ships in Liverpool. He particularly negotiated with John Laird Sons & Co. in Birkenhead, across the Mersey River estuary from Liverpool, to build warships for the South. British neutrality meant that warships could not legally be built in the country for either side, but Bulloch circumvented this problem by ensuring that the ships, while clearly designed for battle, were not actually fitted with armaments in Britain. Through this strategy, the ships could be presented as civilian vessels when they left British jurisdiction, but they would then travel to Terceira, a Portuguese island located in the North Atlantic archipelago of the Azores, where they were armed. Bulloch's subterfuge was blatant, but it successfully confused the legal definition of what could be defined a warship in Great Britain. 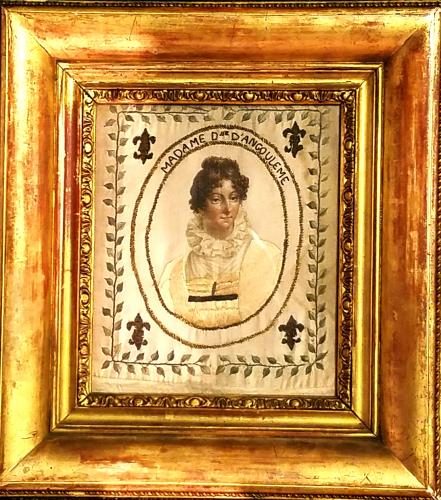 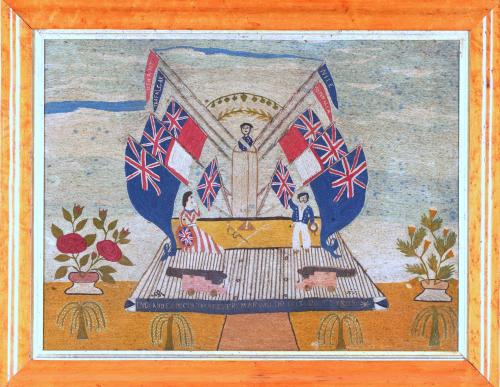 British Sailor's Woolwork or Woolie, Memorial to Lord Nelson, "England expects every man to do his duty" 1805.
Earle D Vandekar of Knightsbridge, Inc 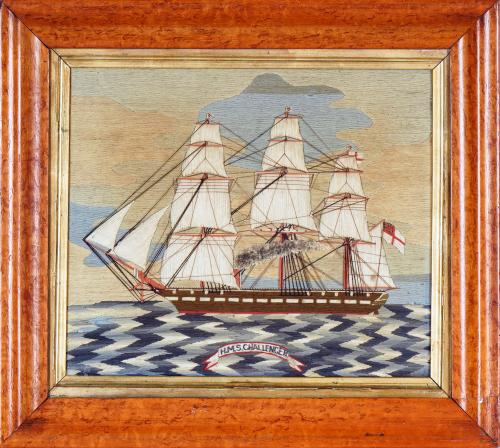 British Sailor's Woolwork of H.M.S. Challenger, Pearl-class Corvette, Circa 1865
Earle D Vandekar of Knightsbridge, Inc
View all from this dealer