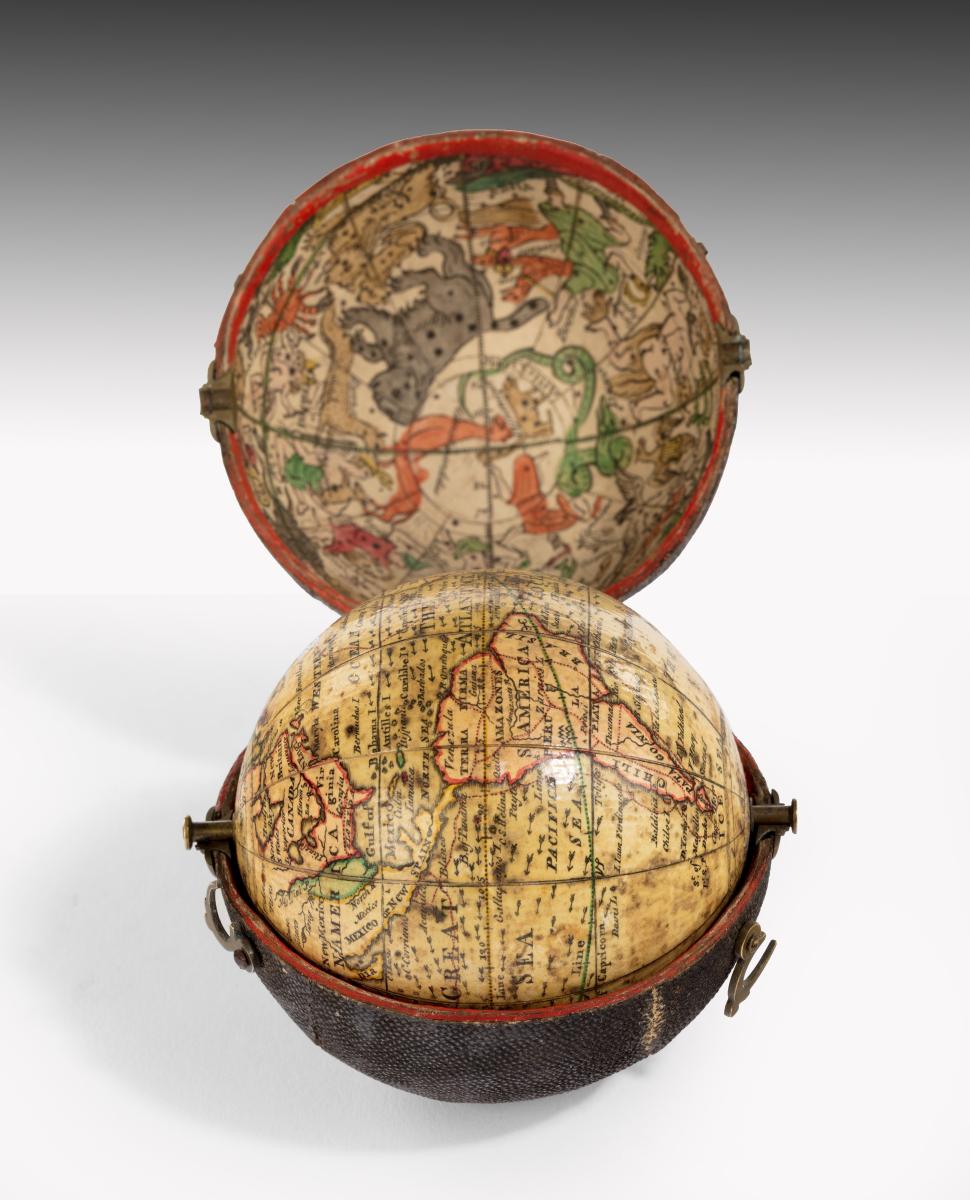 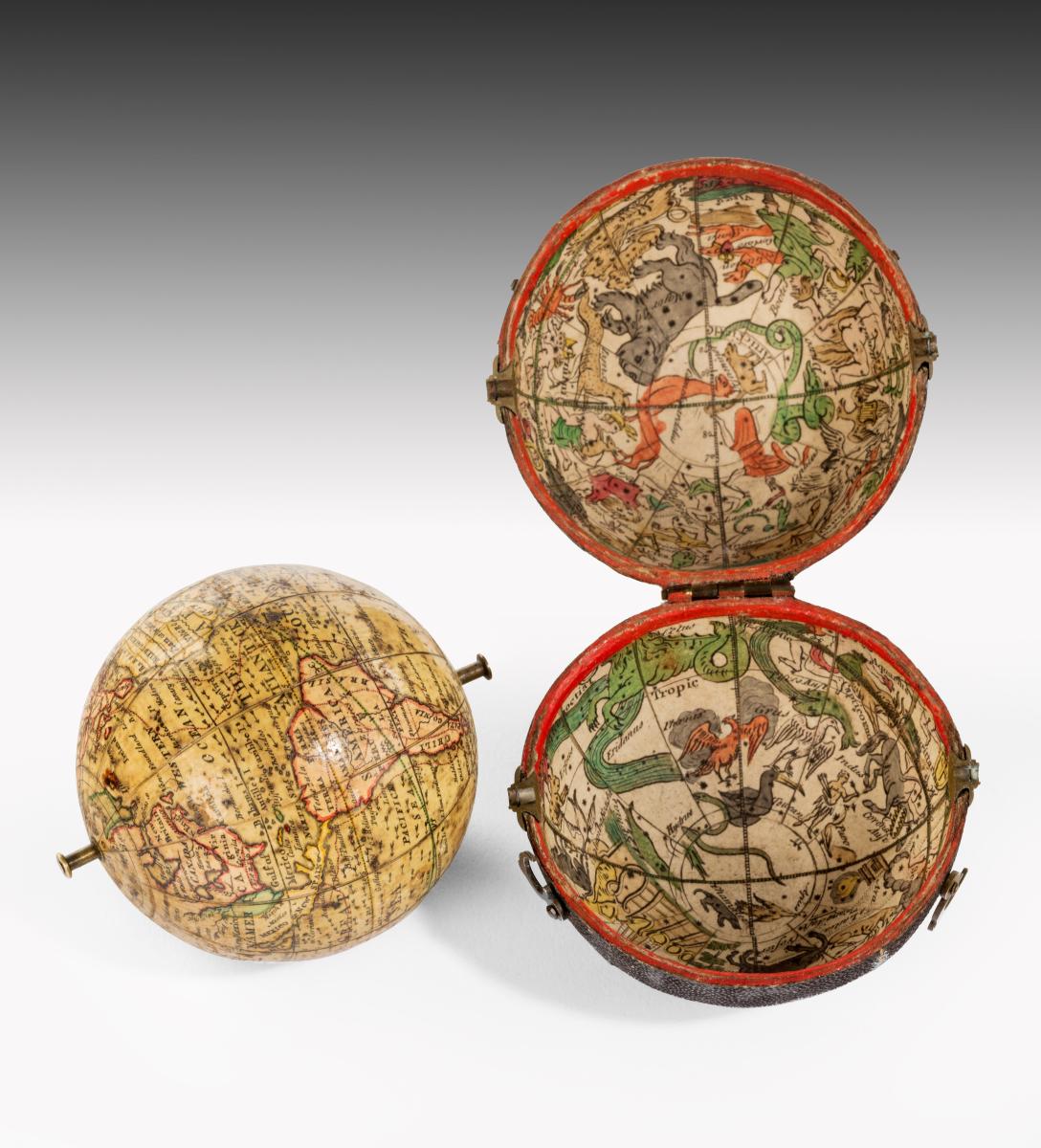 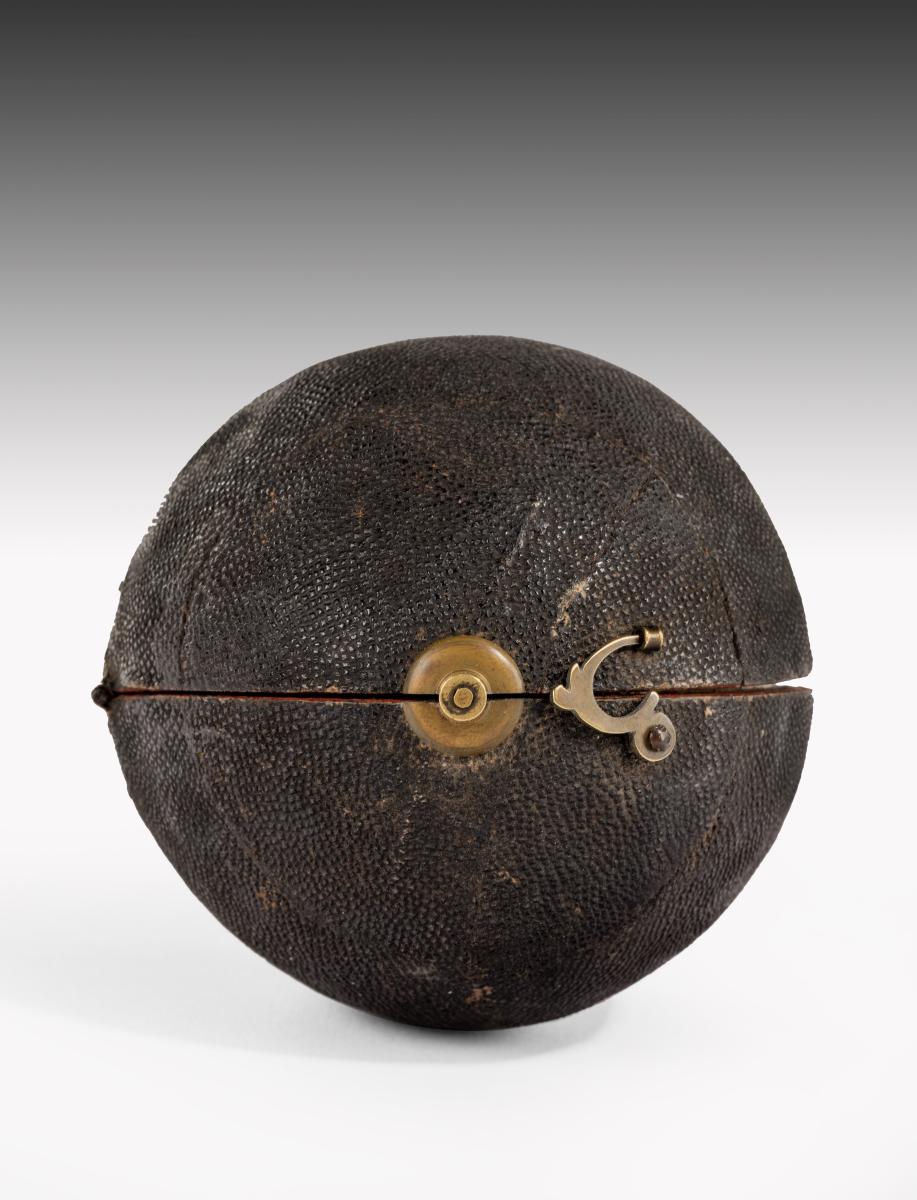 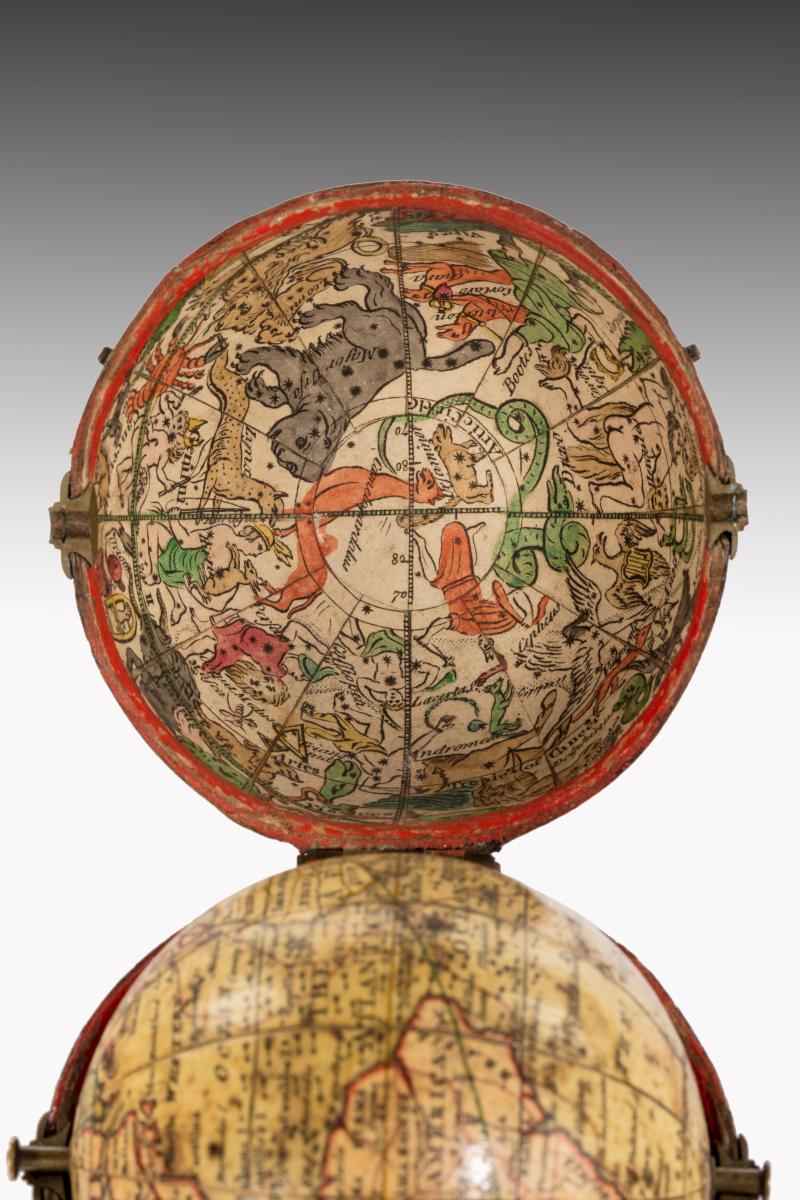 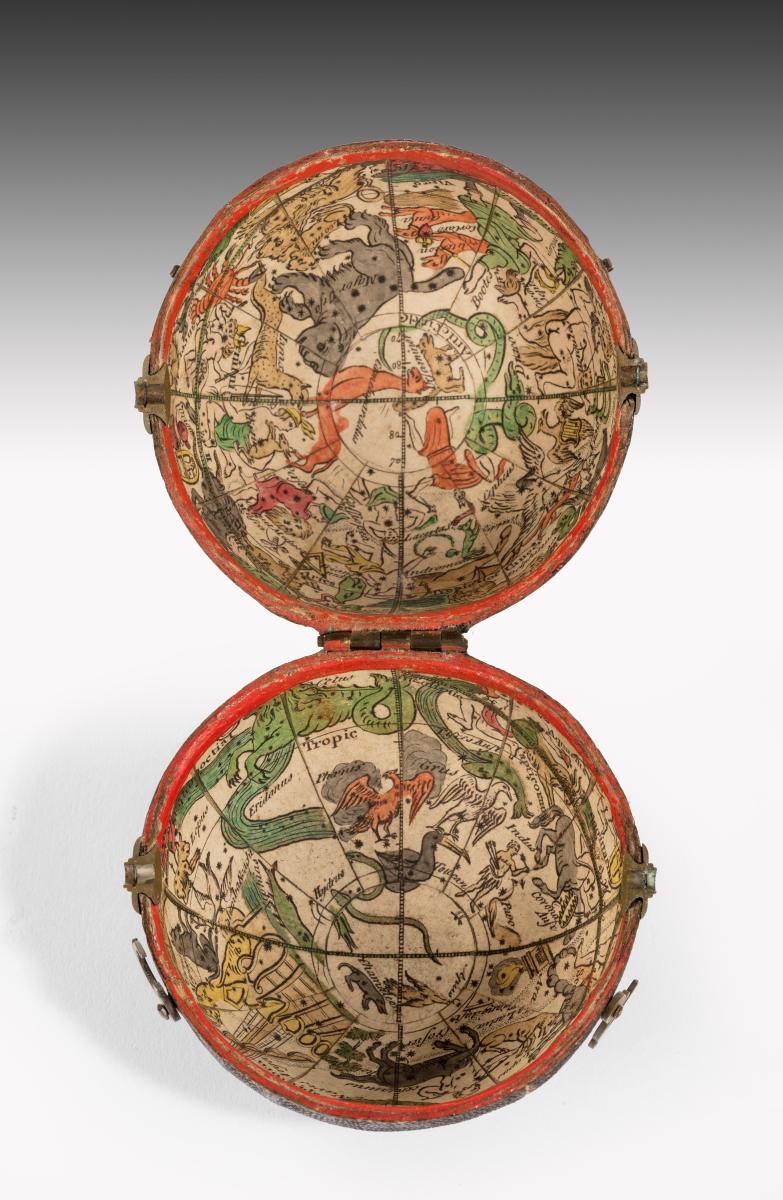 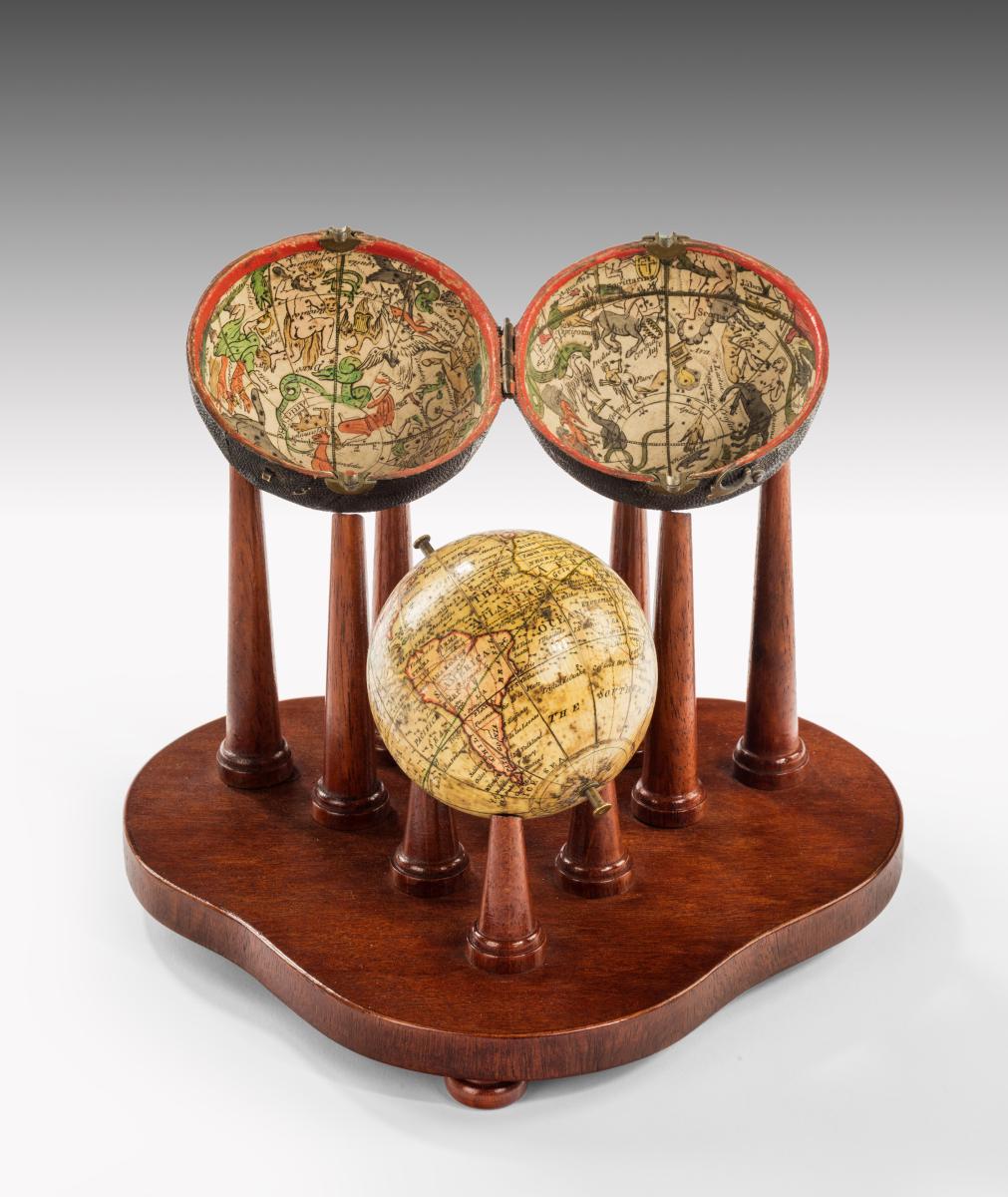 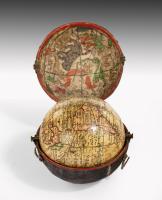 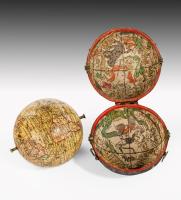 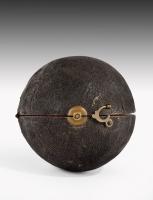 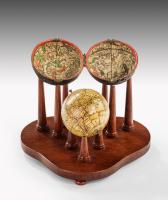 The sphere covered with twelve engraved hand-coloured gores of the Earth, having axis pins at the poles. The globe bears an inscription in a rococo cartouche: ‘A NEW Terrestrial GLOBE by Nath Hill 1754’. The globe is contained within a spherical conforming case opening to reveal two concave hemispheres: one with an applied celestial chart of the Northern Sky; the other with an applied celestial chart of the Southern Sky. The outside of the case is covered with fish skin and the rims of the case are painted red. The two halves are joined with a brass hinge and close with two brass hook-and-eyelet closures. The interior of the fish skin covered case is decorated with hand coloured engravings of the heavens.

Nathaniel Hill (1708-1768): Nathaniel Hill was a map engraver in London, who turned his attention to the construction of globes. In 1730, he was apprenticed to Richard Cushee, a land surveyor, engraver and maker of maps and globes. After Cushee’s death in 1732, Elizabeth Cushee took over the business for a few years. She and Hill eventually married and operated the business under Hill’s name. In the 1740s, he was producing engraved maps of British towns and regions.
The plates of Hill’s 1754 2.75 inch pocket globe were reissued and updated after his death. In 1783, John Newton launched production of a Newton globe with revised versions of this Hill pocket globe and case, which he co-published with the engraver William Palmer (fl. 1765-1803). Shortly afterwards, he produced another one under his own imprint.

A trade card from the period advertises ‘Hill globes’ in four sizes between three and fifteen inches. Hill's trade card, depicting many types of philosophical instruments, is illustrated in Elly Dekker’s ‘Globes at Greenwich: A Catalogue of the Globes and Armillary Spheres in the National Maritime Museum’ (Oxford University Press, 1999), p52.

Pocket globes: Pocket globes were probably produced both as novelty fashion items and as educational tools for children. Dating from the early eighteenth century until the mid-nineteenth century, pocket globes were particularly popular amongst the English aristocracy during a period of remarkable European voyages of world exploration. They were predominantly novelty items for nobles interested in geography and astronomy.

Their small size (usually around 7.5 cm or 3 inches in diameter) made them impractical for serious study, and it is unlikely that pocket globes served precise practical ends as their size makes accurate calculations impossible and they tend to lack the rings and dials required for the most common manipulations. However, their portability and ease of handling made them perfect as both an aide memoire for the well-educated gentleman and as an educational tool for the instruction of school children in geography and astronomy in the upper class schoolroom. 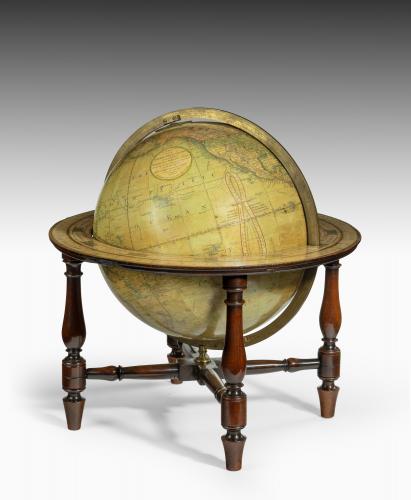