A Louis XVI Style Commode, After the model by Jean-Francois Leleu by François Linke 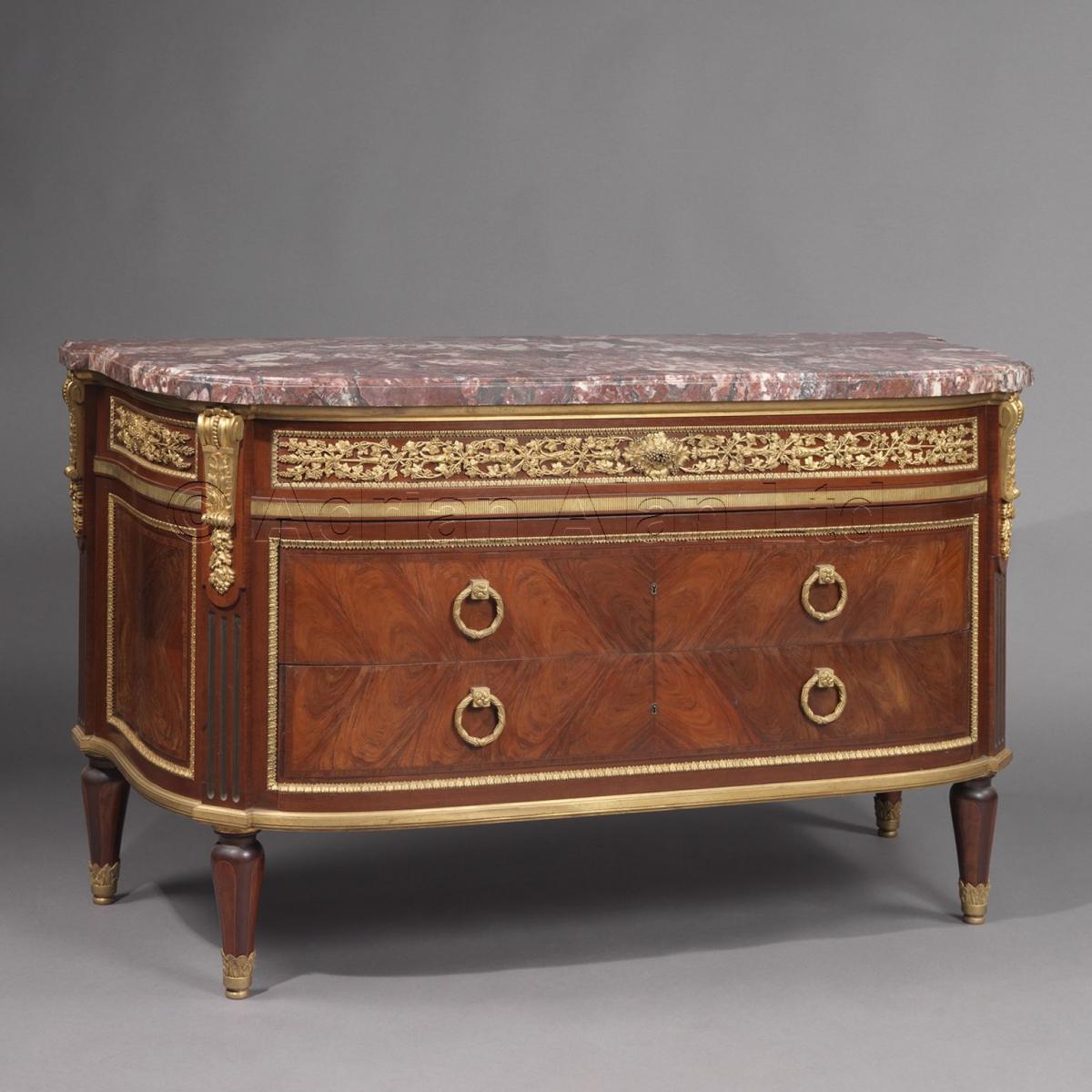 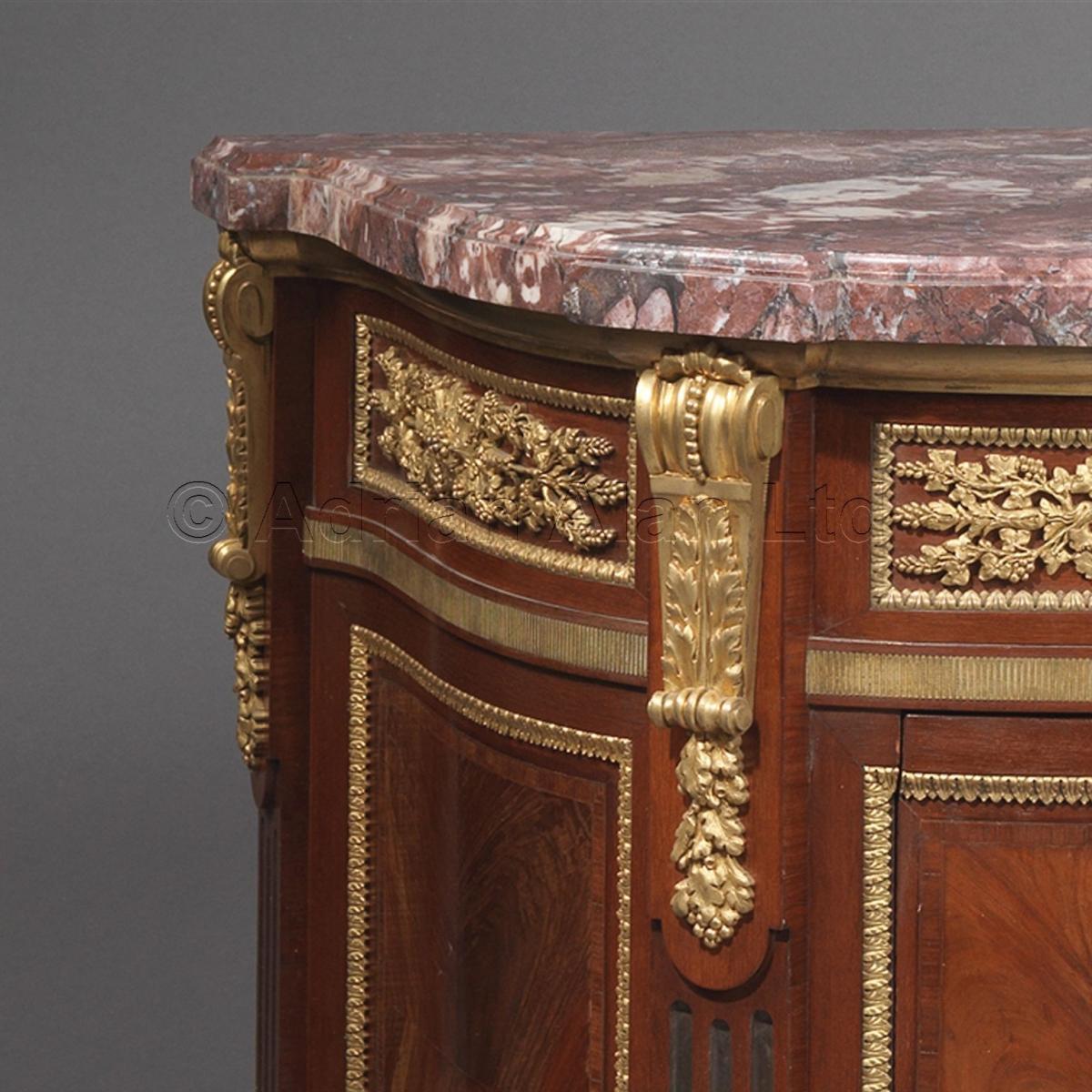 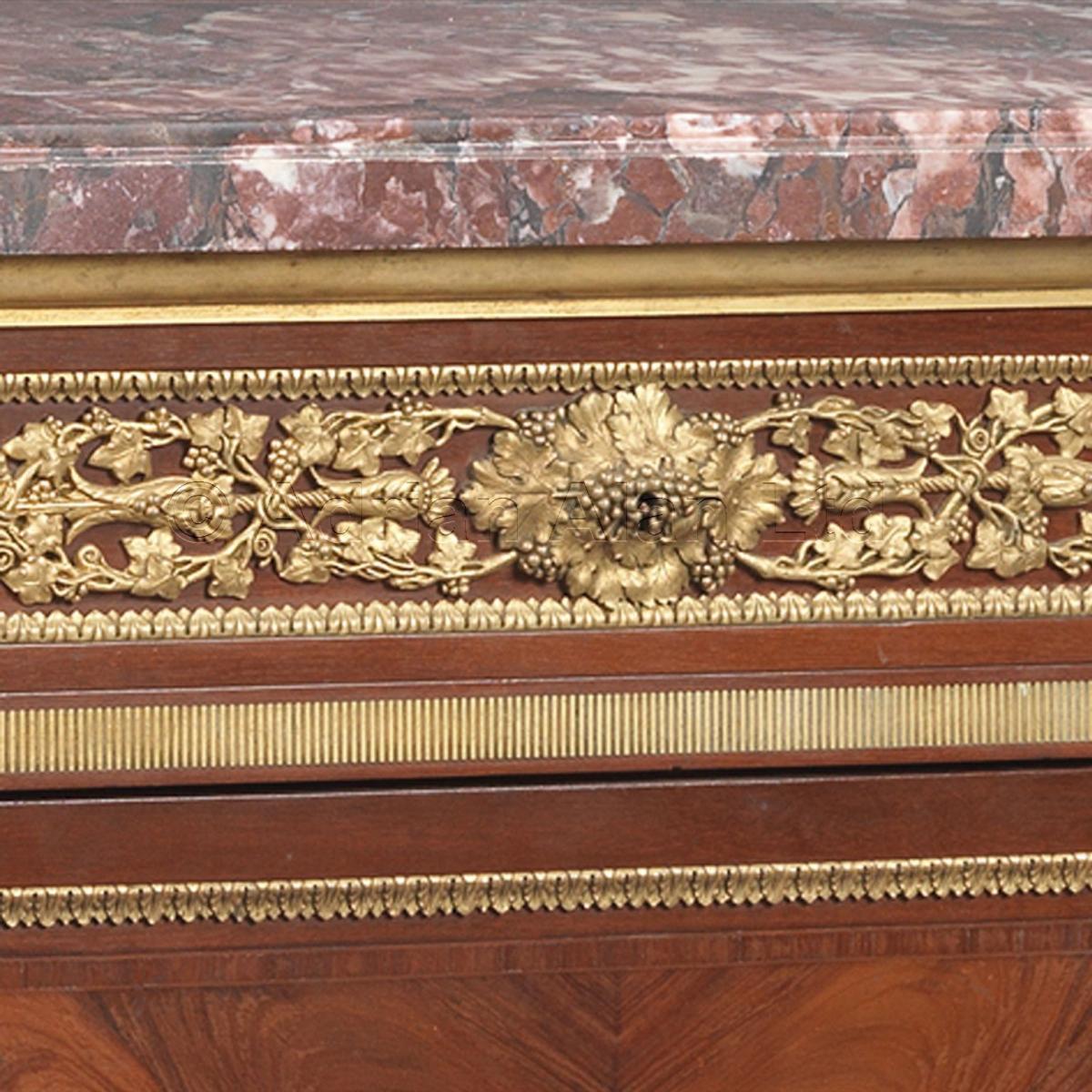 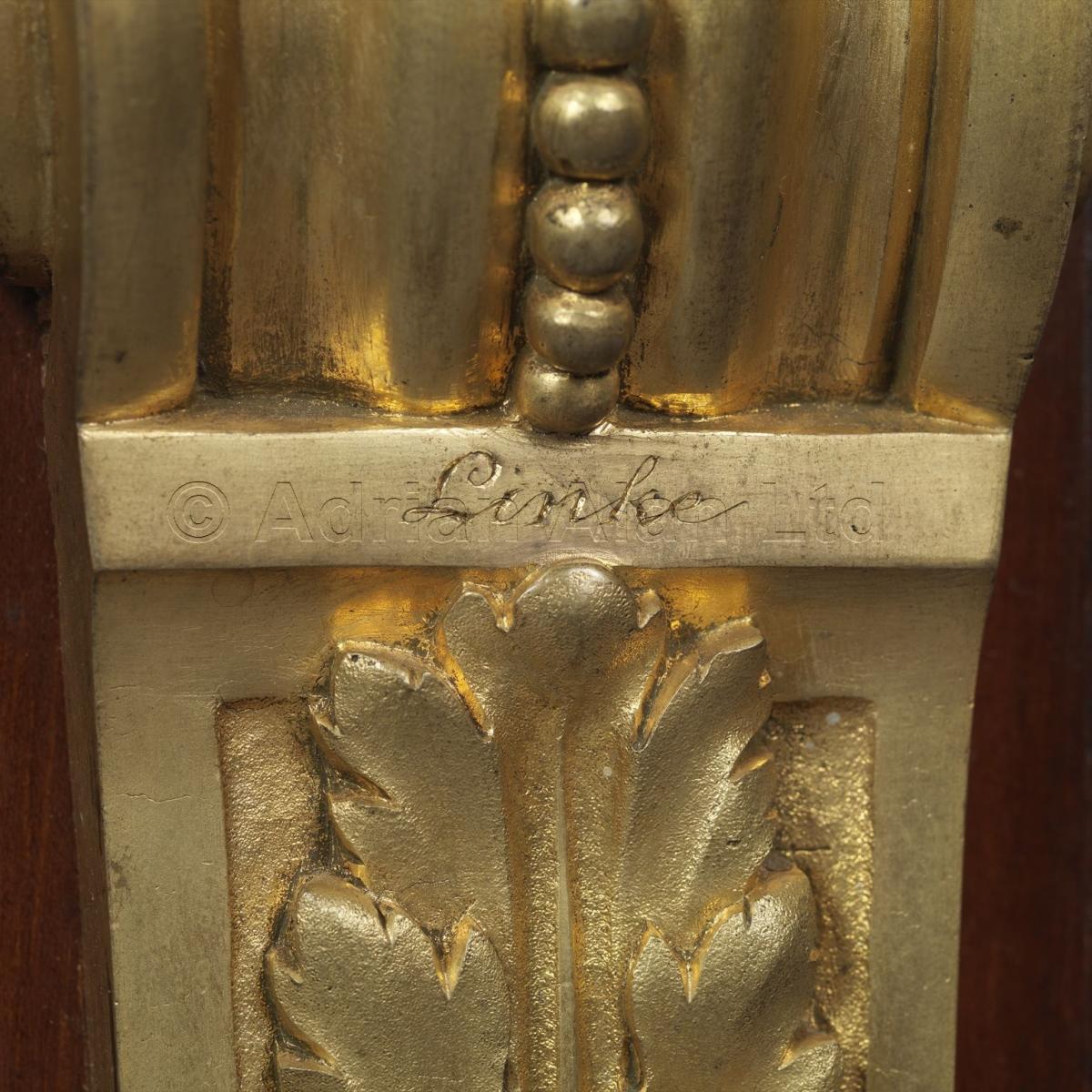 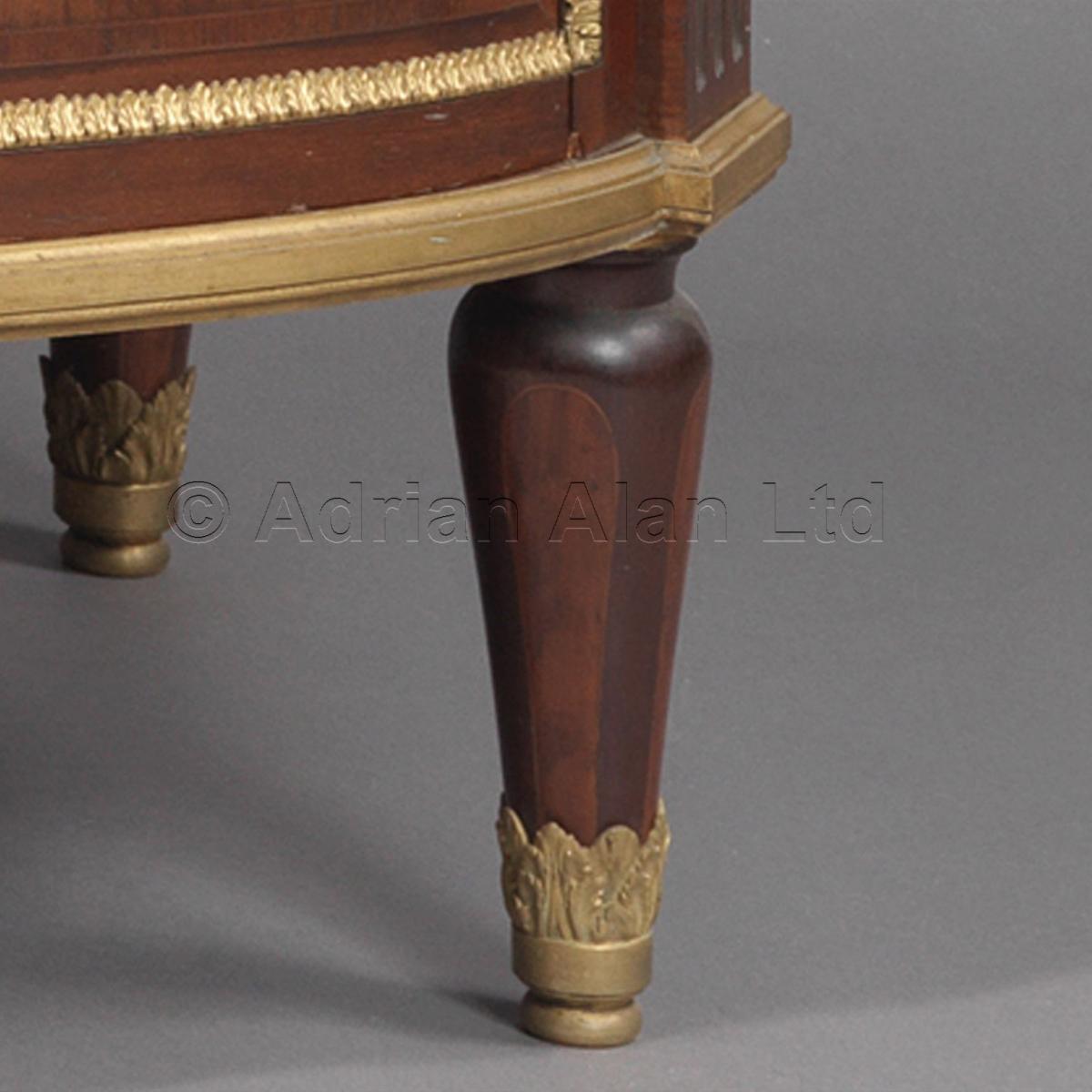 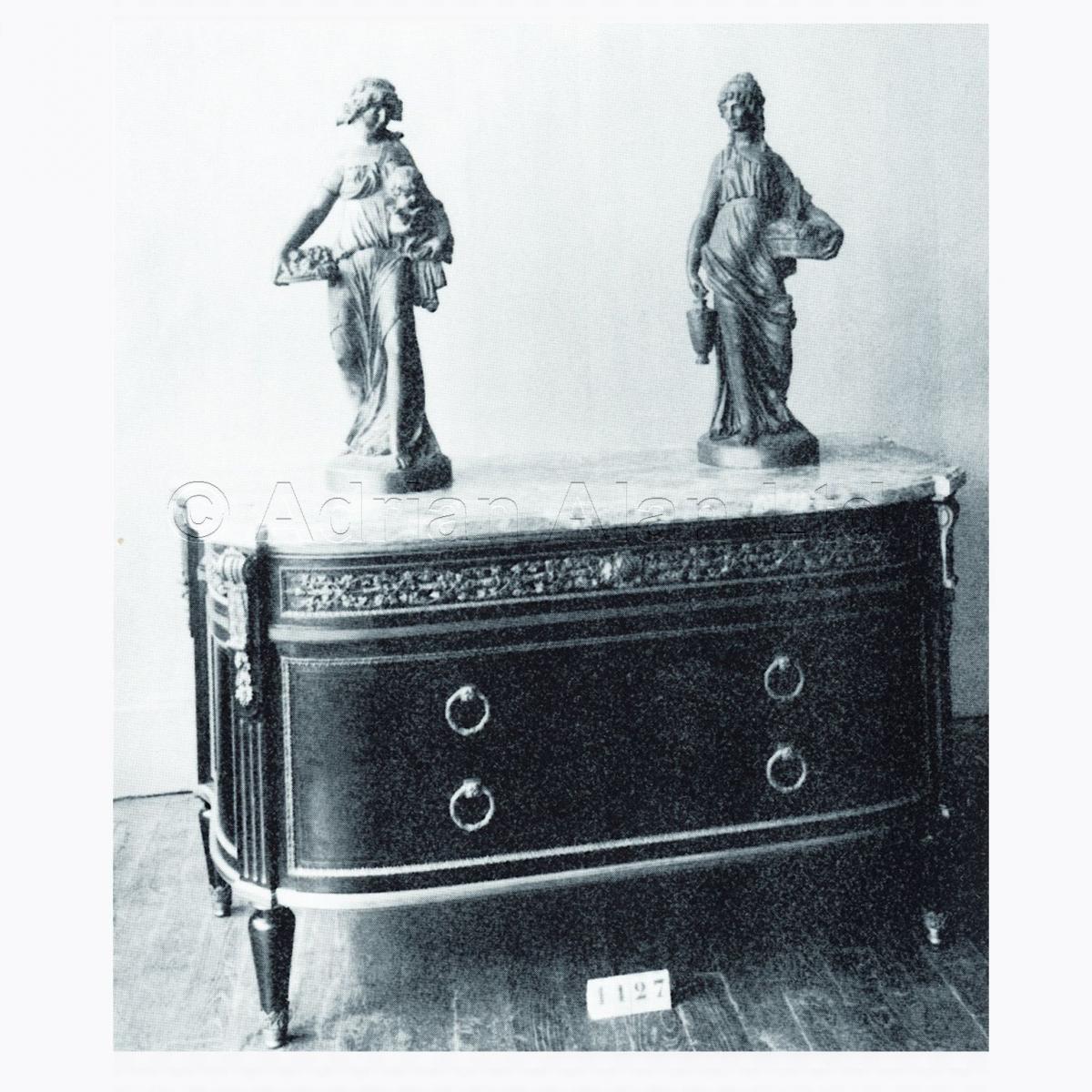 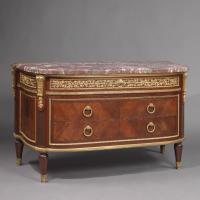 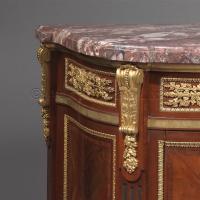 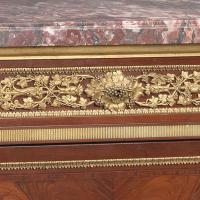 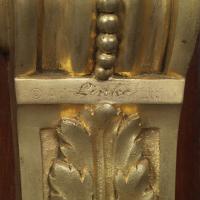 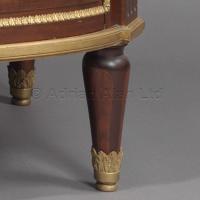 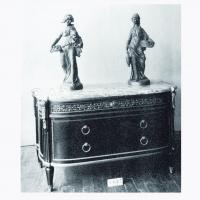 This distinguished commode is quarter veneered in mahogany with bois de violette banding and boxwood stringing.  It is furnished with finely cast gilt-bronze mounts and surmounted by a brèche violette marble top.

It appears that Linke bought the rights to make this commode from the Vente Cueunières in 1902, although there is no trace of it being made by him until the summer of 1908 and there is no entry in the Blue Daybooks for this model. The green registres have two pages devoted to the making of the commodes, the first at a cost of 1,540 and 40 centimes, with eight more made in the intervening years, the last, a pair, in 1927 with the cost price escalating to 8,529 francs. The registre is not entirely clear, but it appears that Clément Linke, father and son, made the locks for this model. The cabinetmaking was exclusively by Guntren who took 496 hours per commode, paid 85 centimes in 1908 rising to 5 francs 75 cents for the last pair. Linke priced this commode at 3,000 French francs, noting in his book 'original est de Leleu est à Trianon.'

The original commode by Leleu, on loan from the Petit Trianon, is shown in a line engraving in the retrospective part of the Exposition de l' Union Centrale des Arts Décoratifs, Paris, 1882, De Champeau & Others, 'Les arts du bois,' pub. Quantin, 1883, p. 80. The commode entered the Petit Trianon in 1867 on the occasion of an earlier exhibition dedicated to the memory of Marie-Antoinette, organised under the patronage of the Empress Eugénie.

Jean-François Leleu:
A pupil and later collaborator with Jean-François Oeben, Jean-François Leleu became maître on the latter’s death in 1763. His work can be divided into two concurrent but distinct styles: the first owing more to the legacy of Oeben, being of large, solid forms, more noble in style; the second, although retaining the clean, definite lines of the first, being an exercise in elegance and understatement. It is this second style for which Leleu is chiefly remembered and which the present commode, with its lightly bombé form and restrained frieze mounts, is a principal example.

He was born in 1855 in the small village of Pankraz, in what is now the Czech Republic.  Records show that Linke served an apprenticeship with the master cabinetmaker Neumann, then in 1875 at the age of 20 he arrived in Paris where he lived until he died in 1946. [...] ...