A Louis XVI Ormolu Clock by Jean-Baptiste Baillon Circa 1765 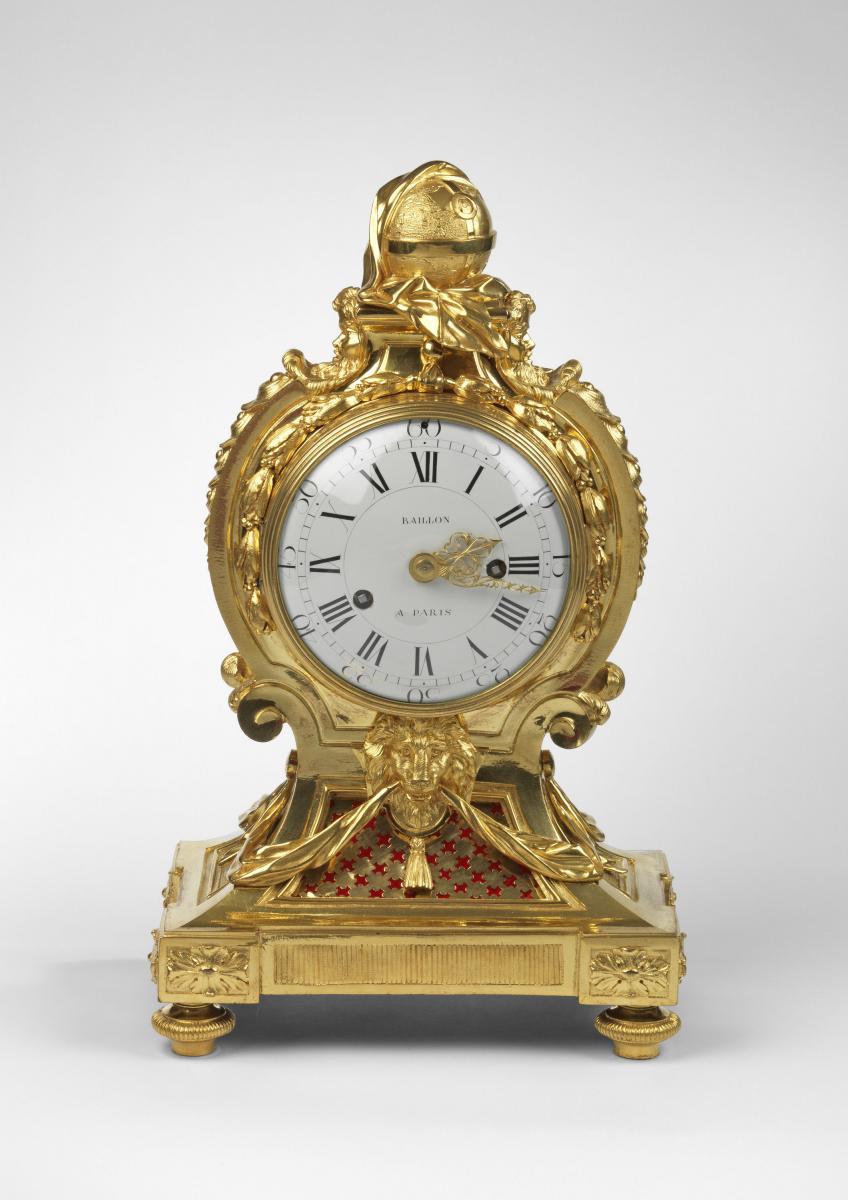 The white enamel dial is set within an ormolu drum-shaped case with a bead and reel border and signed Baillon/à Paris.  The drum is raised on scrolls, above a shaped rectangular base with a pierced ormolu grill, with a lion’s mask holding golden swags of fabric falling across and around the base with reeded sides and rosette corners which rests on four circular gadroon feet. The clock is surmounted by a fabric-draped sphere, with masks to the sides.

A very similar clock, but with different feet and signed on the face by Admyrauld à Paris, is illustrated in Encyclopedie de La Pendule Française by Pierre Kjellberg, p. 176 fig. C.

With its bold neo-classical design headed by a trophy and incorporating garlands, a lion masks and turned feet, this striking clock of grand proportions is indebted to the goût Grec designs of Jean-Charles Delafosse (d. 1791) and Jean-Louis Prieur (d. c. 1785), disseminated through several editions of engraved plates from the late 1760s. While designs by Prieur were in many cases proposals submitted for a specific intent within a defined commission, Delafosse's ornamental designs for trophies, cartouches, clocks, firedogs etc. first published as part of the Nouvelle Iconologie historique in 1768 (S. Eriksen, Early Neo-Classicism, London, 1974, p. 170 and p. 217). It relates closely to the urn clock surmounting the great bureau plat made circa 1754-56 for Ange-Laurent Lalive de Jully, probably by Joseph Baumhauer (died 1772) and Philippe Caffiéri (1714-1774) to the designs of Louis-Joseph Le Lorrain (1714-1759), which is now at the Musée Condé at Chantilly. This clock design is generally associated with the bronzier Robert Osmond, whose signature appears on various known models, but it is probable that the original design was developed and executed was conceived by Caffieri who then lent or transferred the model to Osmond (S. Eriksen, op.cit. 89 and Pl. 187).

Caroline Murat born Bonaparte  (25 March 1782 – 18 May 1839).  Caroline was the younger sister of Napoleon Bonaparte. In 1793, Caroline moved with her family to France during the French Revolution. There, she fell in love with Joachim Murat, one of her brother's generals, and they married on 20 January 1800. Caroline was seventeen years old. Initially, Napoleon did not wish to allow them to marry, however, his wife Joséphine de Beauharnais persuaded him to change his mind. Caroline had been a pupil at the school in St-Germain-en-Laye, founded by Madame Jeanne Campan. She attended the school at the same time as Hortense, Joséphine's daughter, and Caroline's brother Louis' wife. Ambitious, extravagant, and power-hungry she became Grand Duchess of Berg and Cleves on 15 March 1806 and Queen consort of Naples on 1 August 1808. She was intensely jealous of her sister-in-law, Joséphine and her children, as she felt Napoleon favoured them over his Bonaparte relatives. Caroline continuously plotted against Joséphine. It was Caroline who arranged for Napoleon to take a mistress, Éléonore Denuelle, who duly gave birth to his first illegitimate child. This had the desired effect of establishing that Joséphine was infertile, as Napoleon showed he was clearly capable of siring children. When Napoleon married his second Empress, Consort Marie Louise of Austria, Caroline was responsible for escorting her to France. After meeting her at the border of Austria and her duchy, Caroline forced Marie-Louise to leave all her luggage, servants, and even her pet dog, behind in Austria. Consequently, she devoted herself to the interests of her husband Joachim Murat, the King of Naples. Her relations with Napoleon became increasingly strained in 1813–1814, as Joachim shifted allegiances. She supported his decision to make a separate peace with the anti-Napoleonic allies, keeping his throne, while Napoleon was deposed. Then, during the Hundred Days of 1815,  Joachim, came out for Napoleon. He was defeated and executed, and Caroline fled to the Austrian Empire. Whilst in exile, she adopted the title 'Countess of Lipona'; 'Lipona' being an anagram of 'Napoli' (Naples). In 1830, she married Francesco Macdonald (1777–1837), who had been Minister of War of the Kingdom of Naples in 1814 and 1815. She lived in Florence until her death in 1839. The couple had no children.