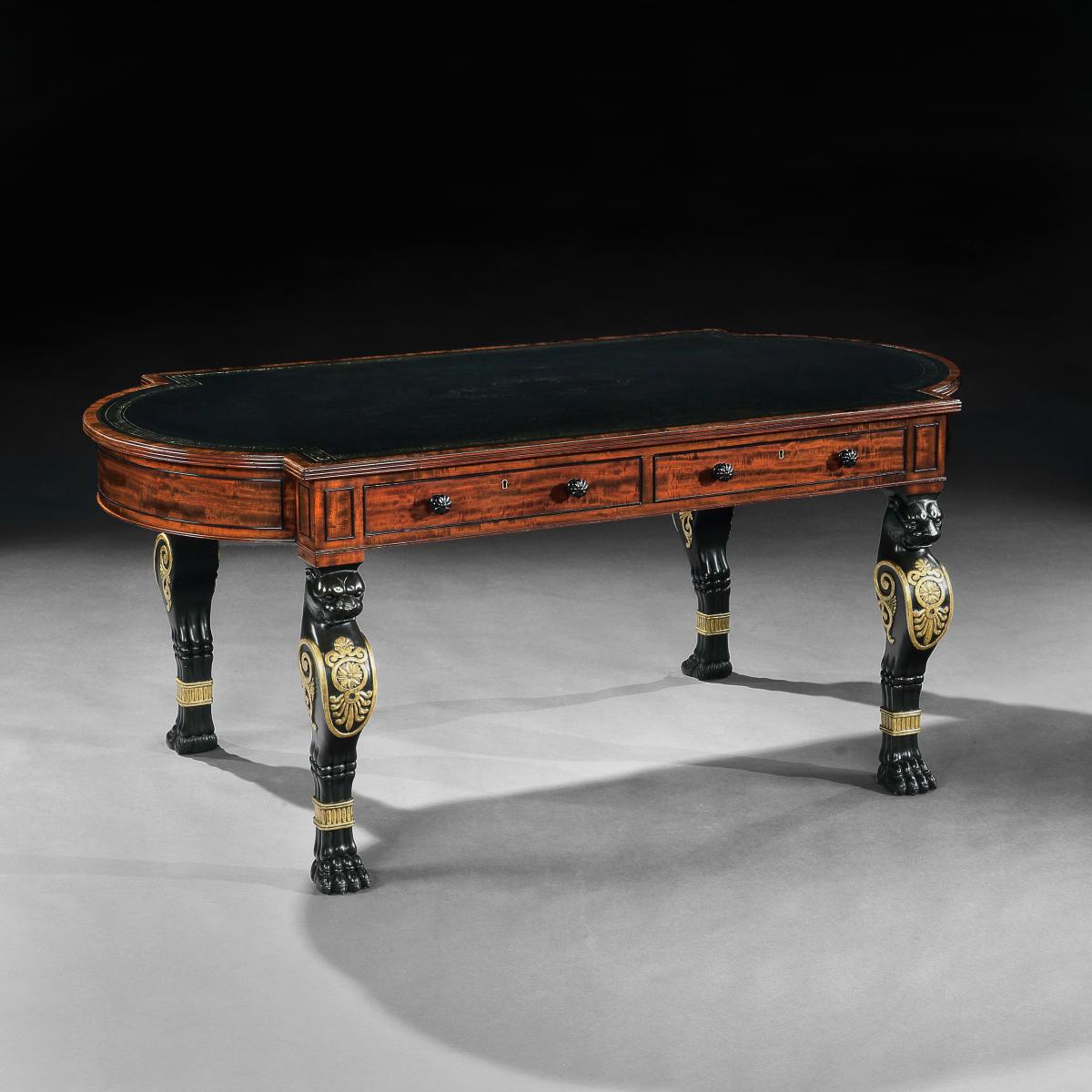 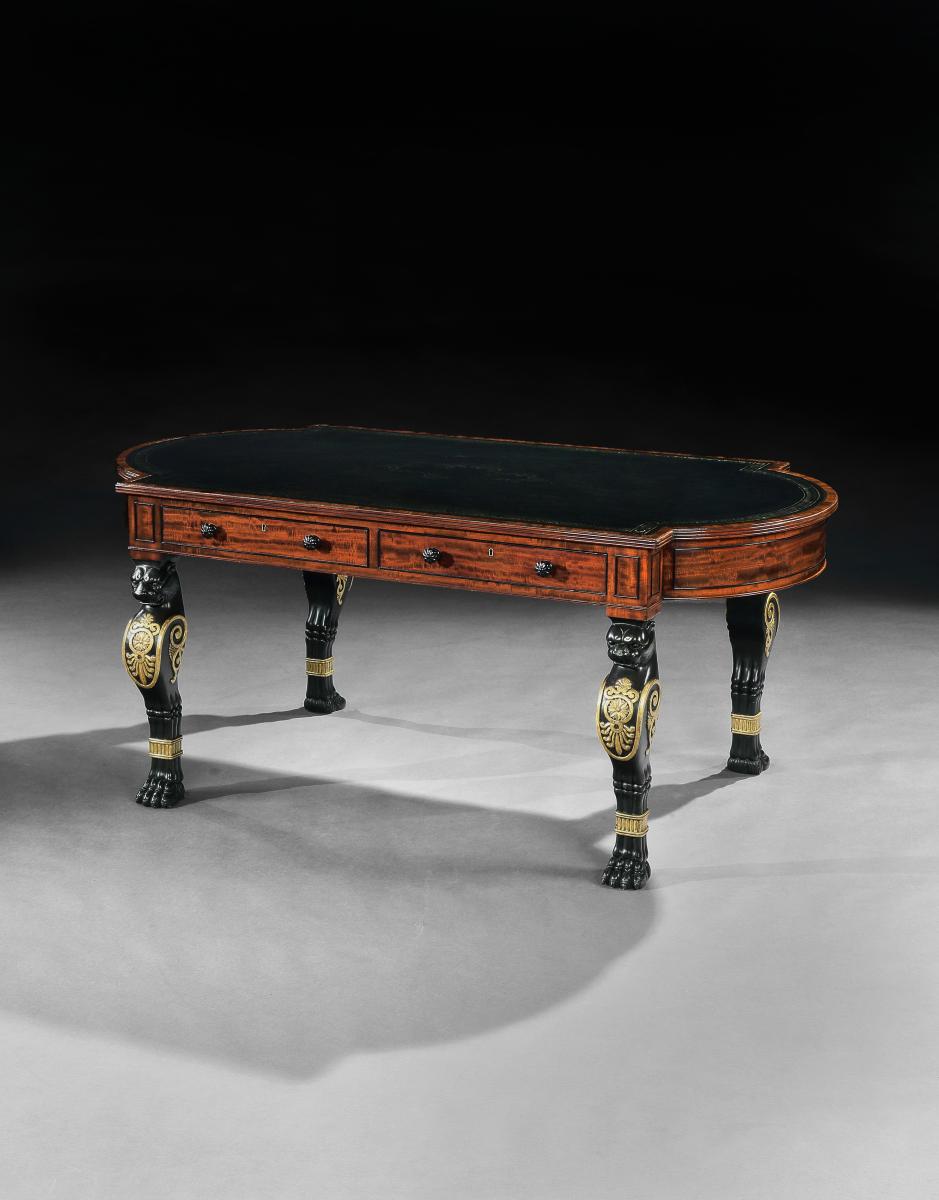 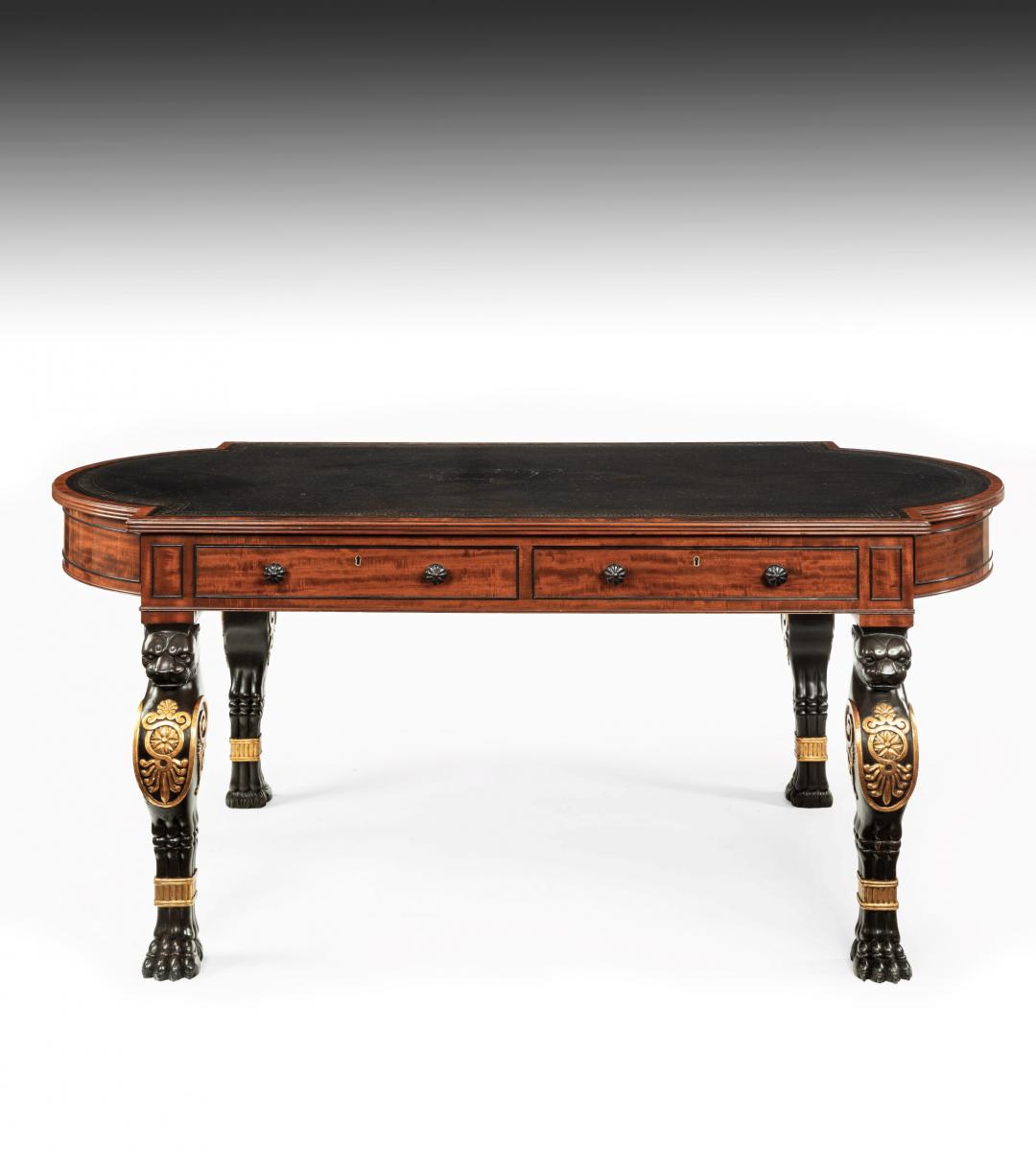 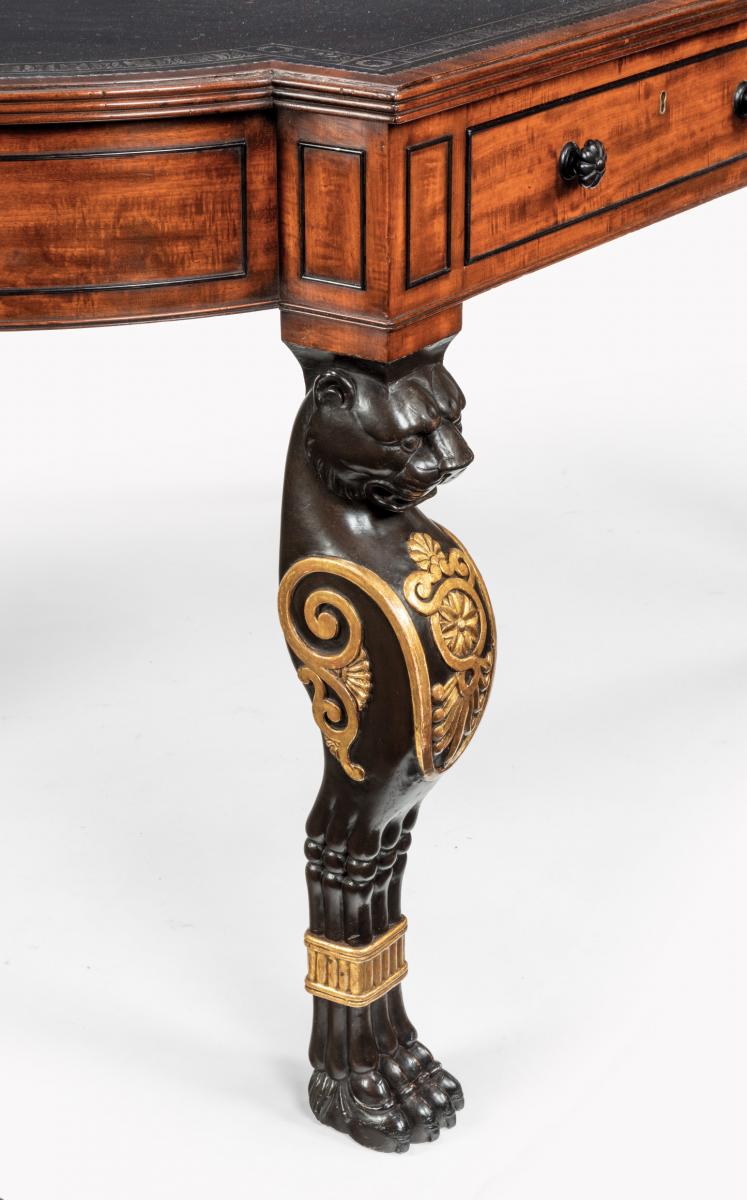 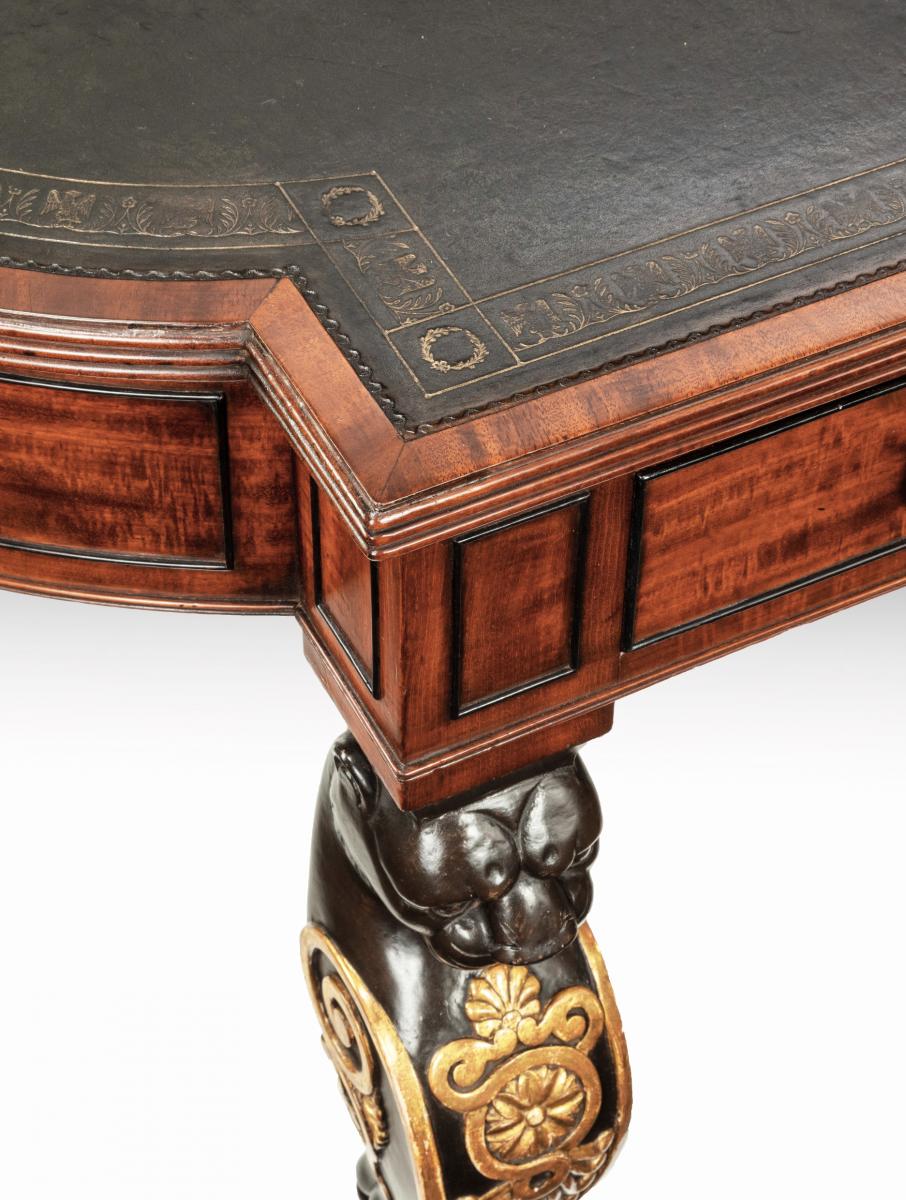 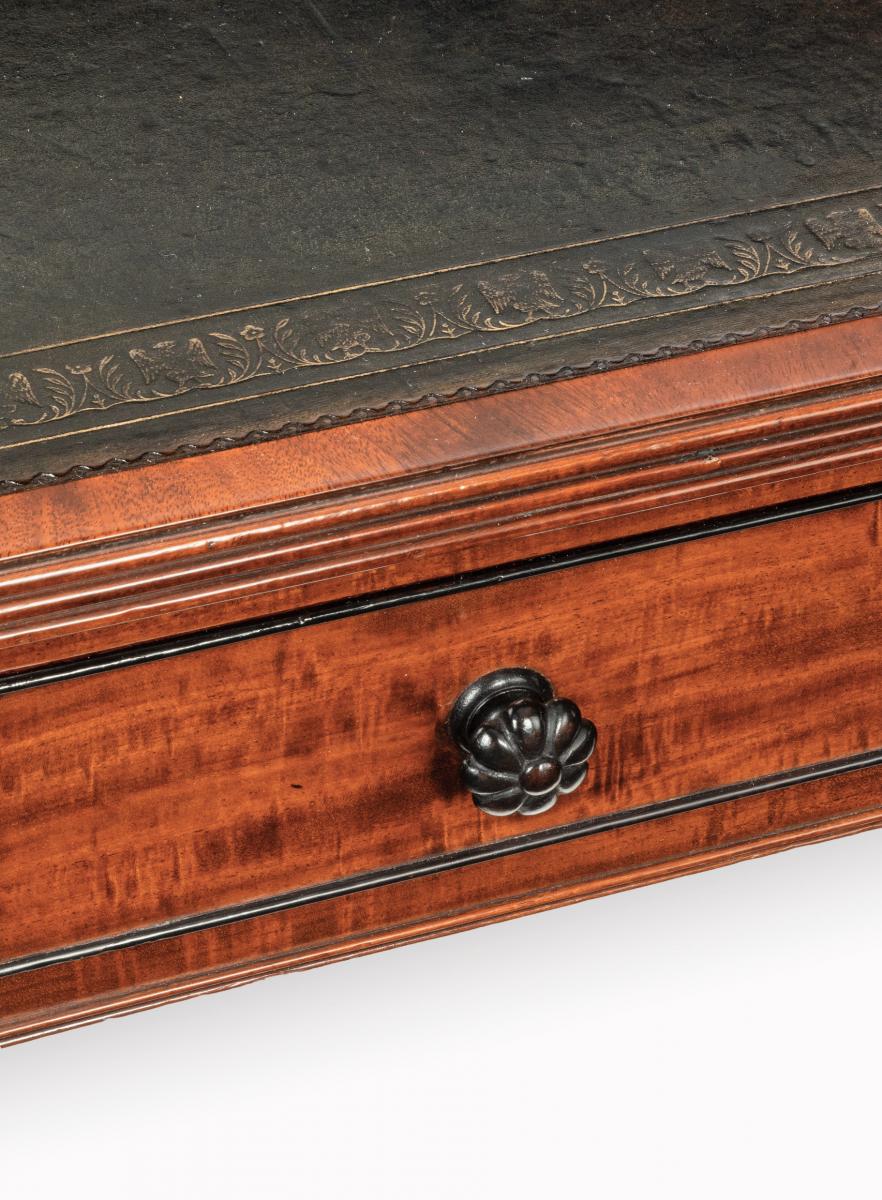 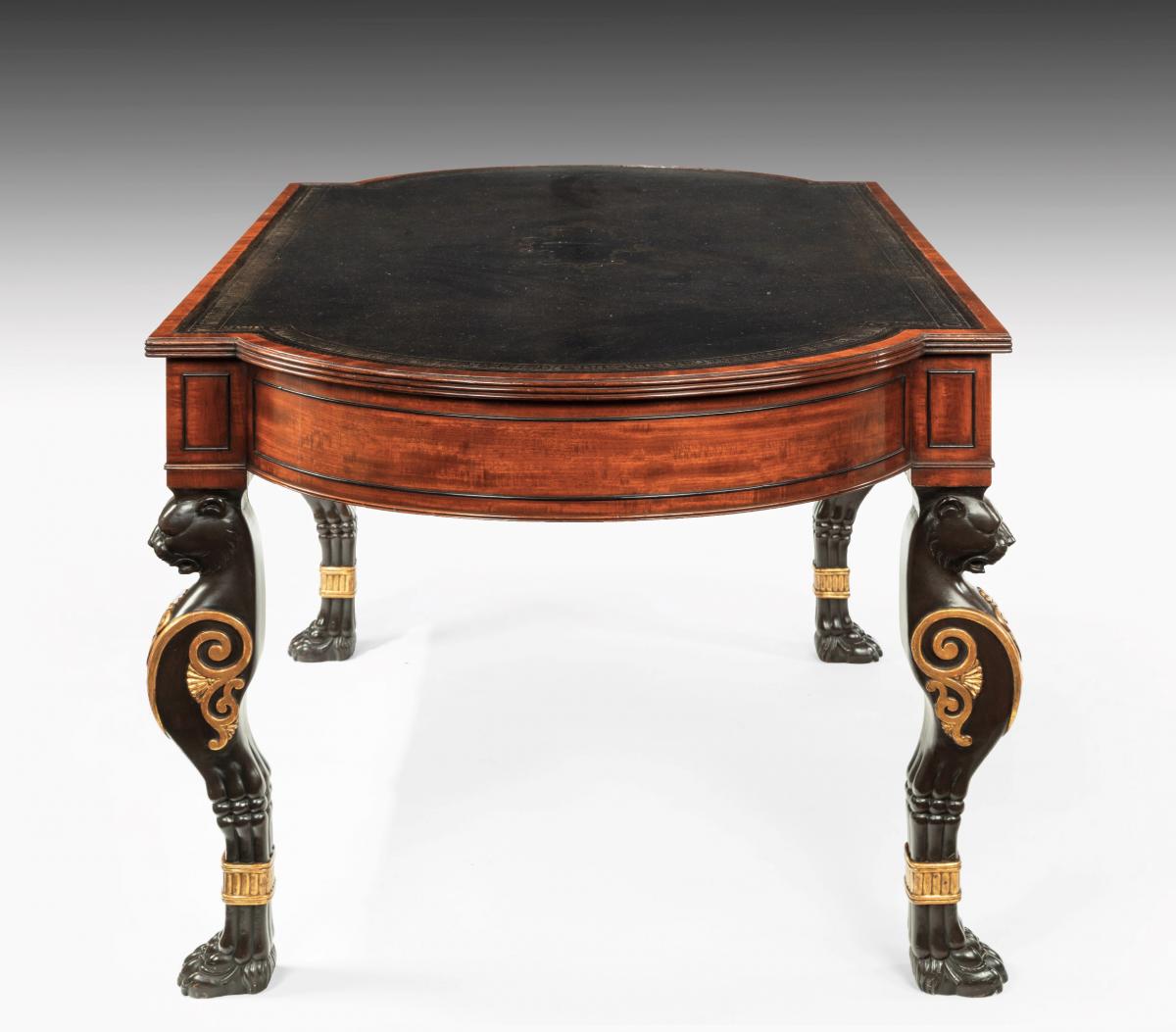 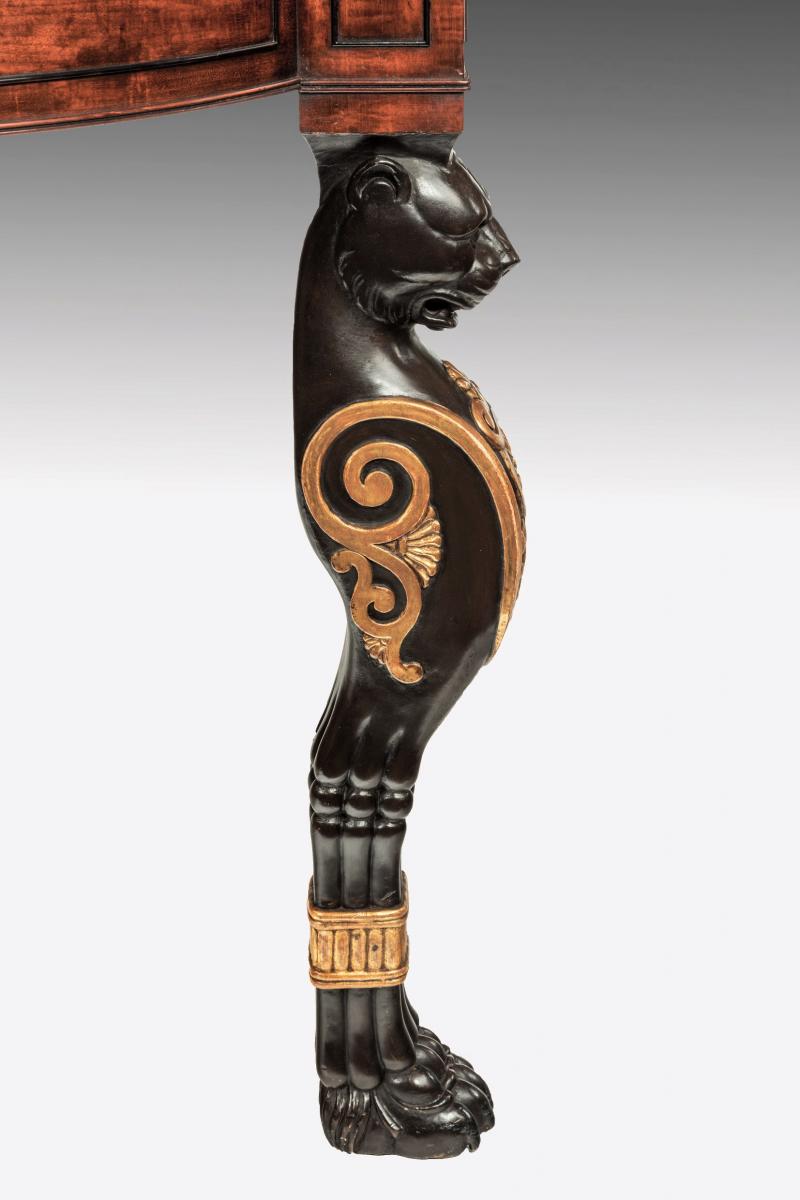 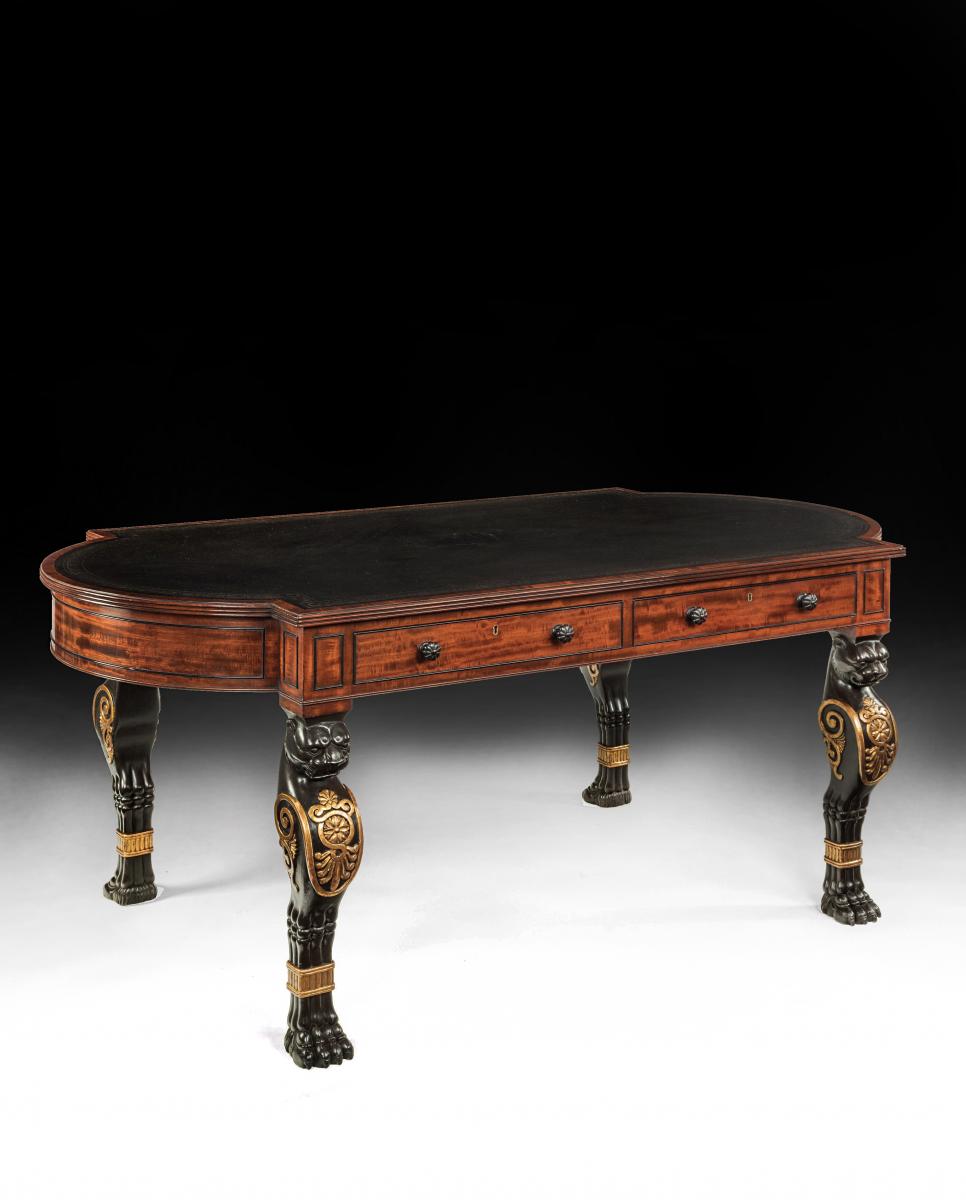 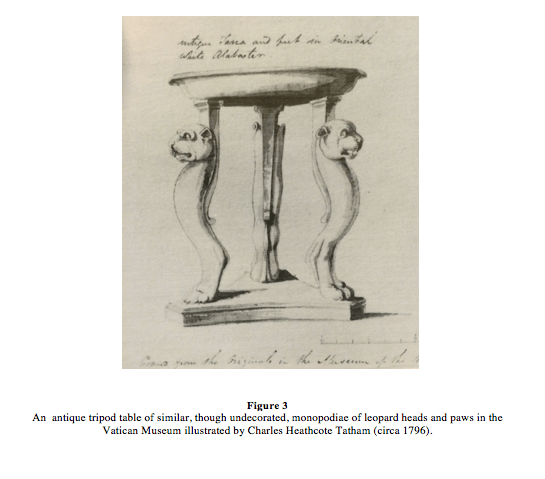 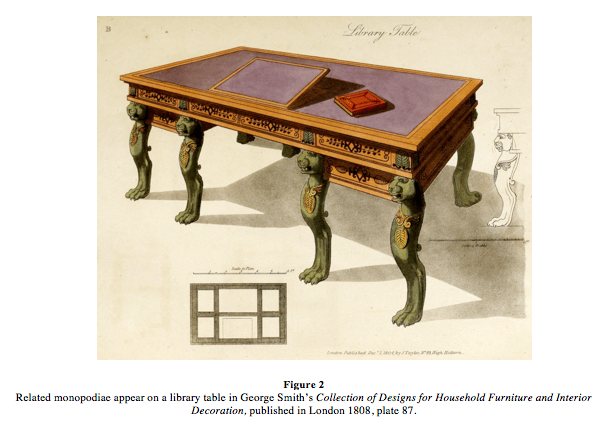 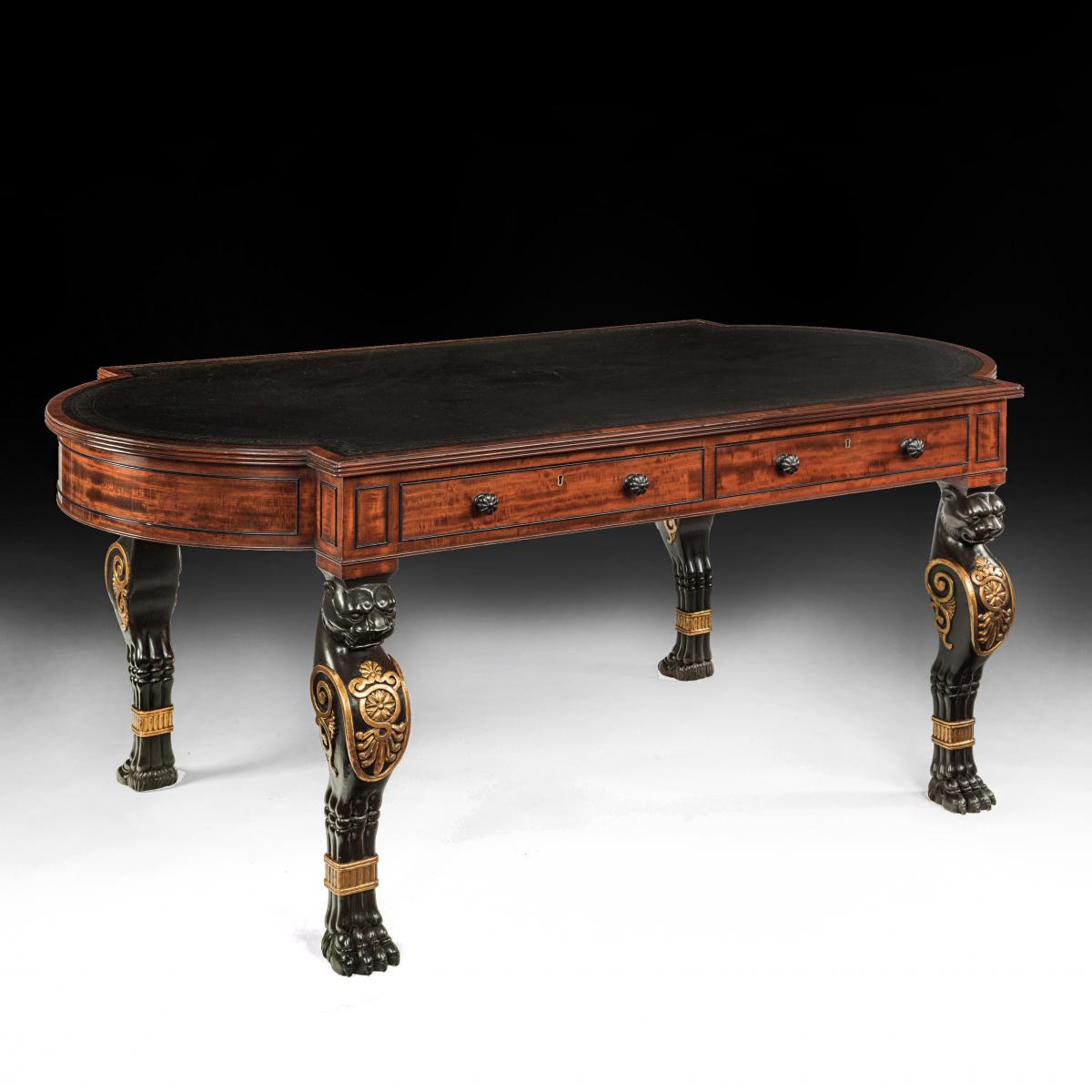 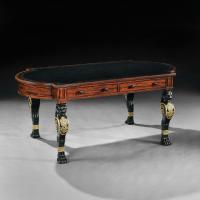 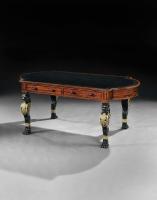 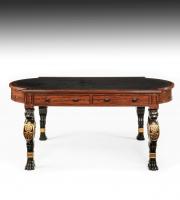 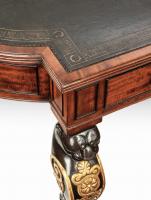 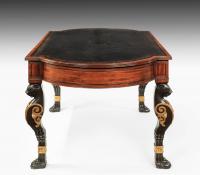 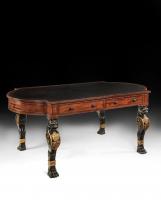 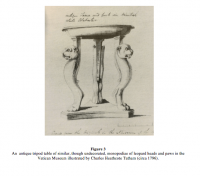 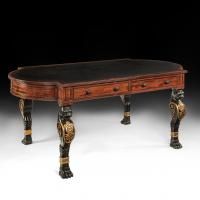 A highly Important, Early Regency period mahogany, ebonised and parcel gilt partners writing table on monopodia legs of exceptional quality and design, in the manner of George Smith, stamped Chas Norman, whom was associated with the work of Gillows. Labelled ‘Morning Library’. English, Regency period, Circa 1810.

The perimeters having a finely ebonised cockbead, whilst the drawer liners being executed in mahogany retain the original recessed brass locks, which look to have never been removed. Flanking the drawers are bead-moulded ebonised panels which conform to either end above a reeded mould.

The condition is excellent, retaining the original hand-dyed and gilt tooled waxed leather writing surface along with original locks, handles and ebonising with gilt-work to the legs. Commissioned for what presumes to be a private collection and due to its condition, being obvious to see, this writing table has been home to an important household.

Labelled ‘Morning Library’ to the underside, whilst in this exemplary condition strongly suggests this striking piece of Regency furniture has furnished the library of the said house for the majority of its life. As can be noted, this is an extremely rare, elegant, early Regency writing table of exceptional colour, which corresponds with designs of the celebrated furniture maker and designer George Smith, workmanship of Gillows, being stamped to the underside Chas Norman four times.

George Smith (1756 - 1826) was one of the most influential furniture designers of the English Regency Period (1811-1830). Smith, who began his pattern-book in 1804, wrote of ‘the great taste and elegance’ of this design. In 1808 he published his influential and definitive text on Regency interior Design titled ‘ A Collection of Designs for Household Furniture and Interior Decoration’ and classed himself as ‘Upholder Extraordinary to His Royal Excellency the Prince of Wales’…The Prince Regent.

Smith was inspired in his designs from his earlier career as an Egyptologist, producing drawings incorporating motifs of Leopards heads and paws, Lions, sphinx’s, anthemia, and griffons amongst others. Charles Heathcote Tatham (1772-1842) published ‘Etchings, Representing the Best Examples of Ancient Ornamental Architecture; Drawn from the Originals in Rome, and Other Parts of Italy During the Years 1794, 1795, and 1796’, in which he illustrated an antique tripod table with similar monopodiae of leopard heads and paws, based on the original in the Vatican.

Thomas Hope (1769-1831) was also another influential figure to Smiths designs. A rich young man, being the eldest of three sons from a family of Dutch bankers, Hope had travelled extensively spending several years in the Middle East and Greece. He published his ‘ancient furniture’ designs in the ‘Household Furniture and Interior Decoration. 1807’, which was an important and influential book throughout the Regency period.

George Smith interpreted Thomas Hopes Egyptian and Grecian themes (although the plates are dated 1804-7) into a more practical design with a greater regard for comfort and utility than for archaeological accuracy, which was widely accepted as the turning point in Regency furniture for the affluent gentry.

Literature for Design of Top and Monopodia Leg: The carved monopodiae on the present writing table related closely to Smith's design for a sofa table (plate 83, 1804) and also his design for a library table (plate 87, 1804). What can be seen in Smiths book is the similarity in design to the legs with embellished anthemion motifs on a lion-monopodia leg.

For a similar table of shape on lion-monopodia legs see Margaret Jourdain, Regency Furniture, London, 1949, p128 , fig. 139 from Lord Huntingfield, Heveningham Hall. In the same book also the monopodia legs of a closely related design to that of a mahogany side table c1810 from the Duke of Richmond, Goodwood House, page 104 fig 89.

A daybed supported by similar monopodia was supplied by Gillows, which is now in the collection of the Victoria and Albert Museum, London is illustrated in Margaret Jourdain, Regency Furniture, London, 1949, p. 99, fig. 77. Charles Norman and Gillows. Constructed by Charles Norman whom is noted in the ‘Gillows of Lancaster and London 1730-1840’ book by Susan E. Stuart, where is it said ‘Lucy Wood has reported a similar set of chairs to “Edwards Library” pattern (for this design see Plate 198) stamped ‘Chas Norman’ (LL 4180, Letter 6.9.1999).

There is, however, no evidence of his apprenticeship or foremanship in Lancaster.” The “Edwards Library” chair was a distinctive pattern introduced by Gillows in 1810 and one which became very popular for them. Charles Norman is obviously a master cabinet maker with links to Gillows designed furniture, producing items at the same time of conception to the Gillows design book. #

There is obviously a strong link between both Charles Norman and Gillows, along with the rare shaped top being almost a signature of Gillows, the timbers used on this writing table are of such quality, which Gillows monopolised during this era due to their company importing the timbers themselves.

For reference; a writing table with a very closely related top can be seen in the ‘Gillows of Lancaster and London 1730-1840 book by Susan E. Stuart, page 375, plate 444. It is the view of the Library at Tatton Park which was a highly important commission for Gillows. For other examples of Gillows attributed writing tables with related shaped top please see…. Christies London, 2 May 2002, Lot 157 sold for £59,750 albeit with lesser reeded legs.

Interestingly, variant designs for lion monopodia’s featured in Charles Heathcote Tatham's Etchings representing fragments of Antique Grecian and Roman Architectural Ornament originally published in 1799, including that for an 'Antique Tripod of oriental alabaster from the collection in the Museum of the Vatican' which features a closely related prototype leg. As can be seen from the literature, this is a highly important stunning piece, of exceedingly rare design, derived from the most famous designers of the Regency period. 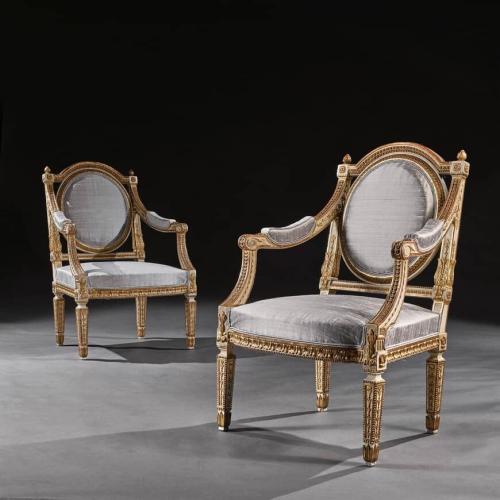 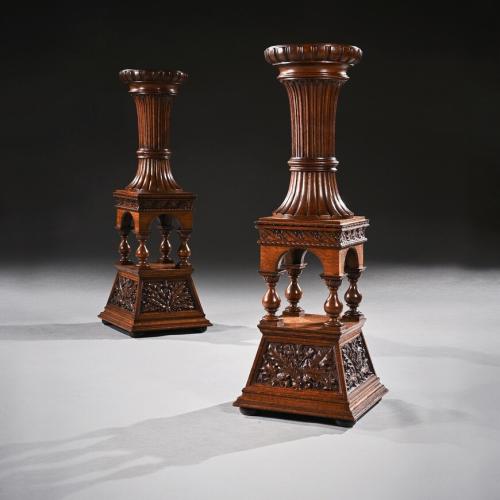 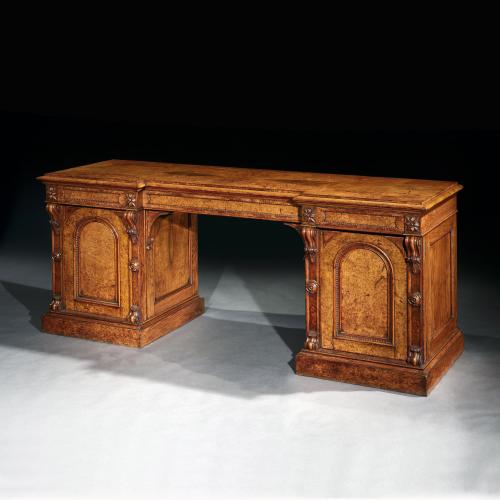