Drocourt Paris: A Carriage Clock in the Early Empire Style 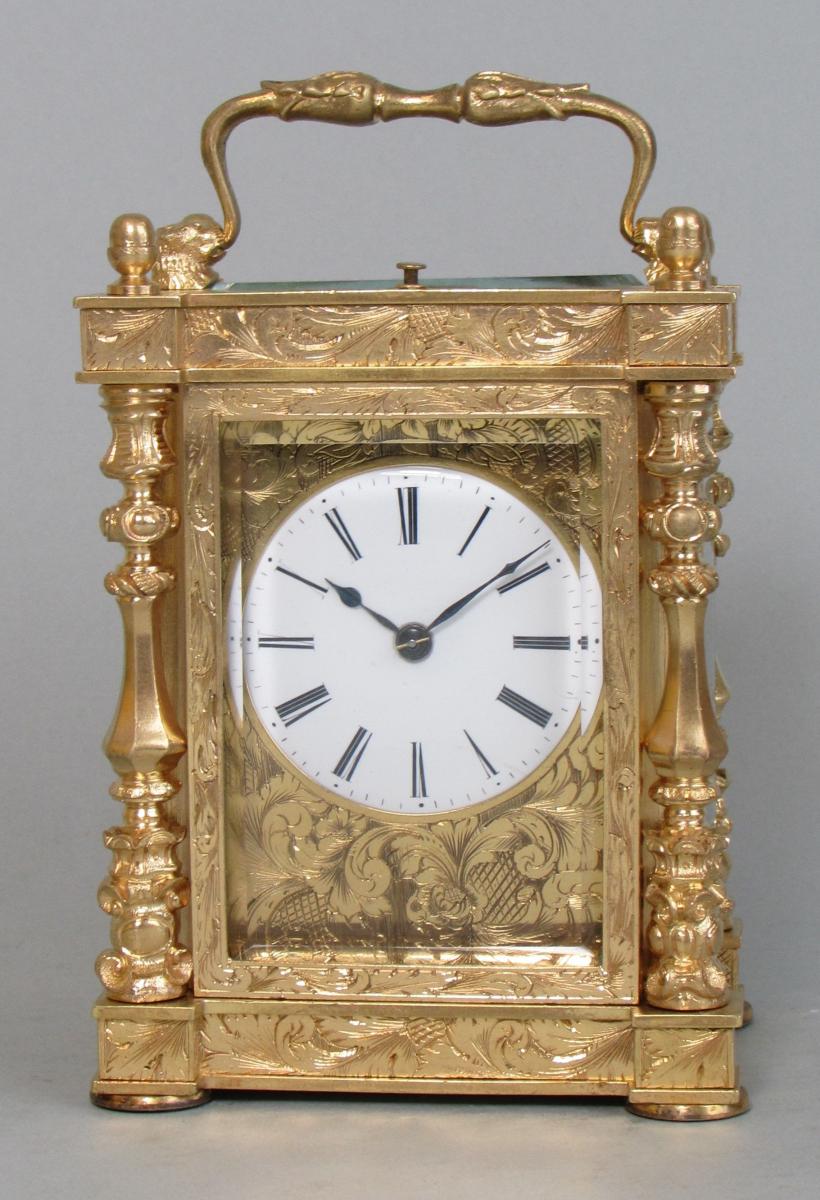 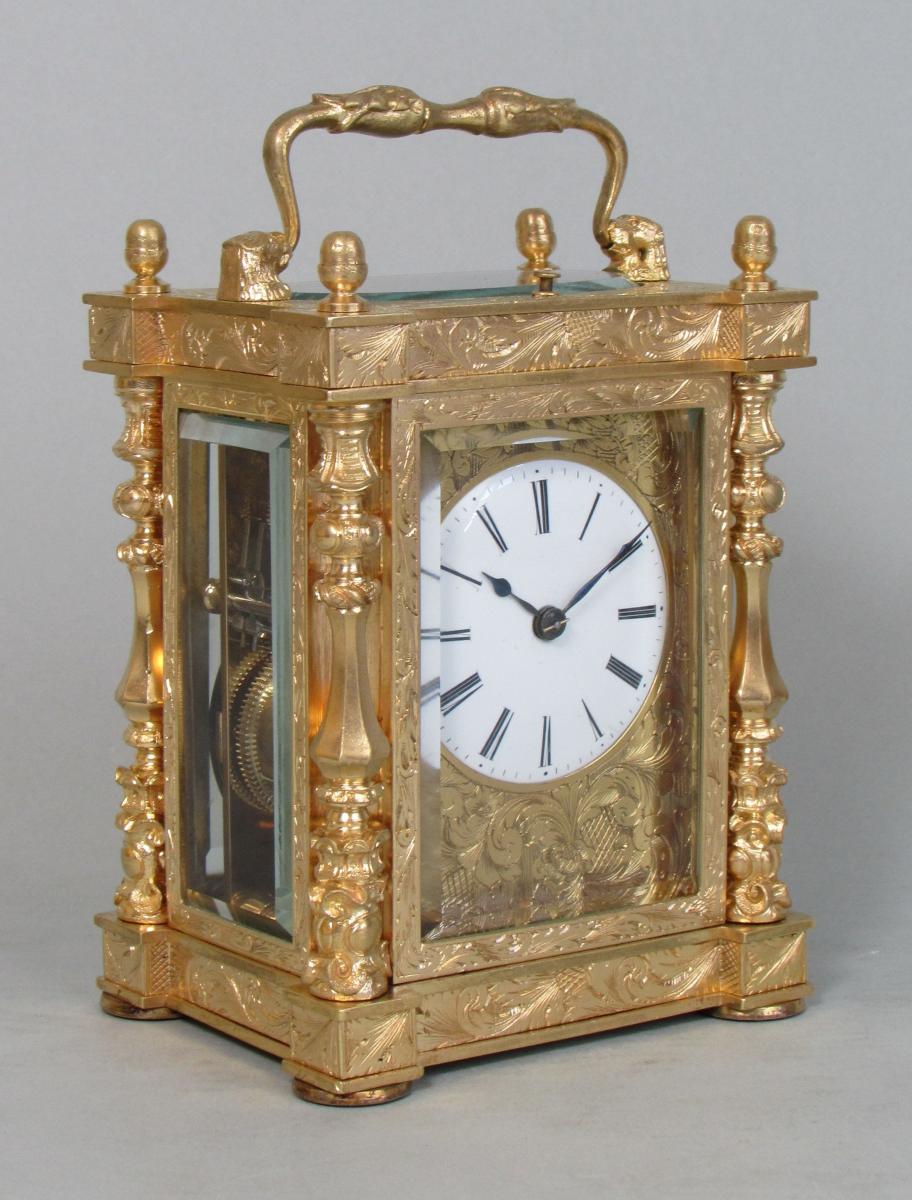 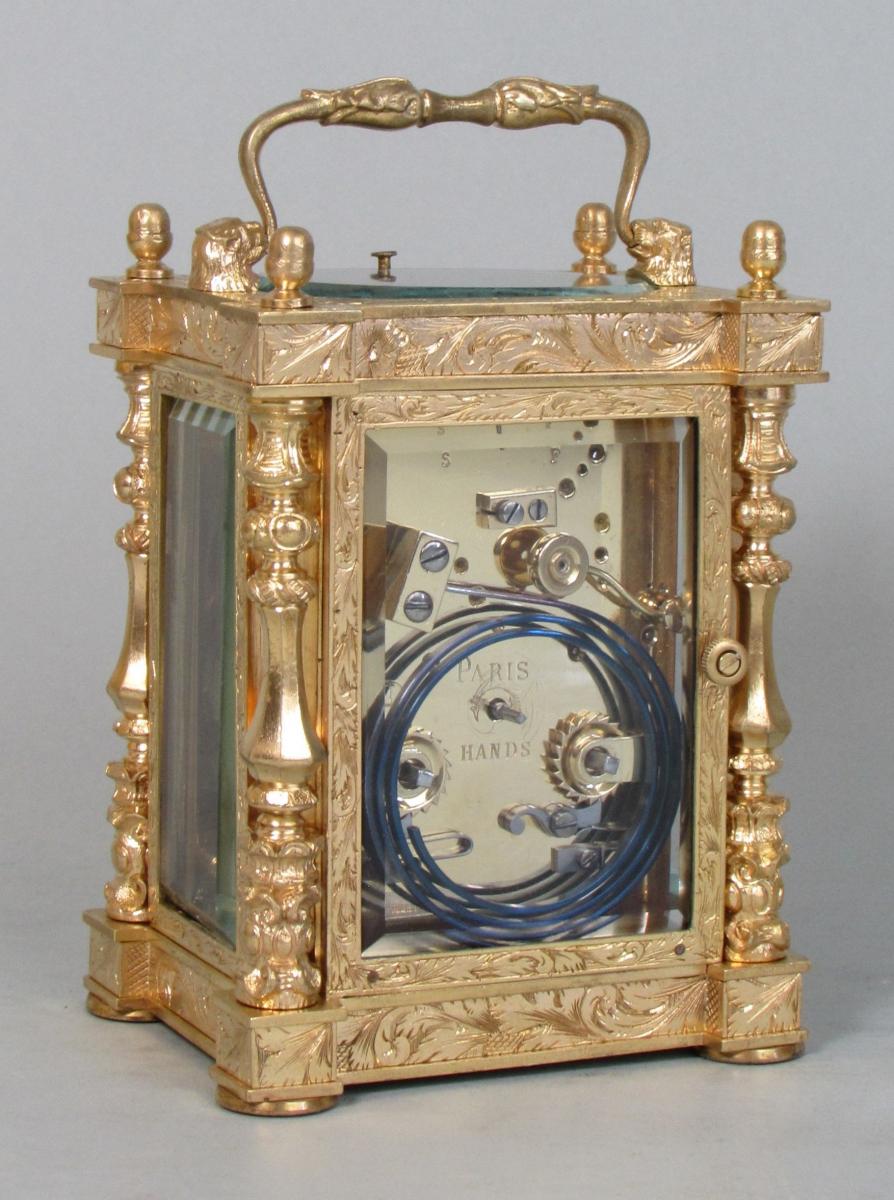 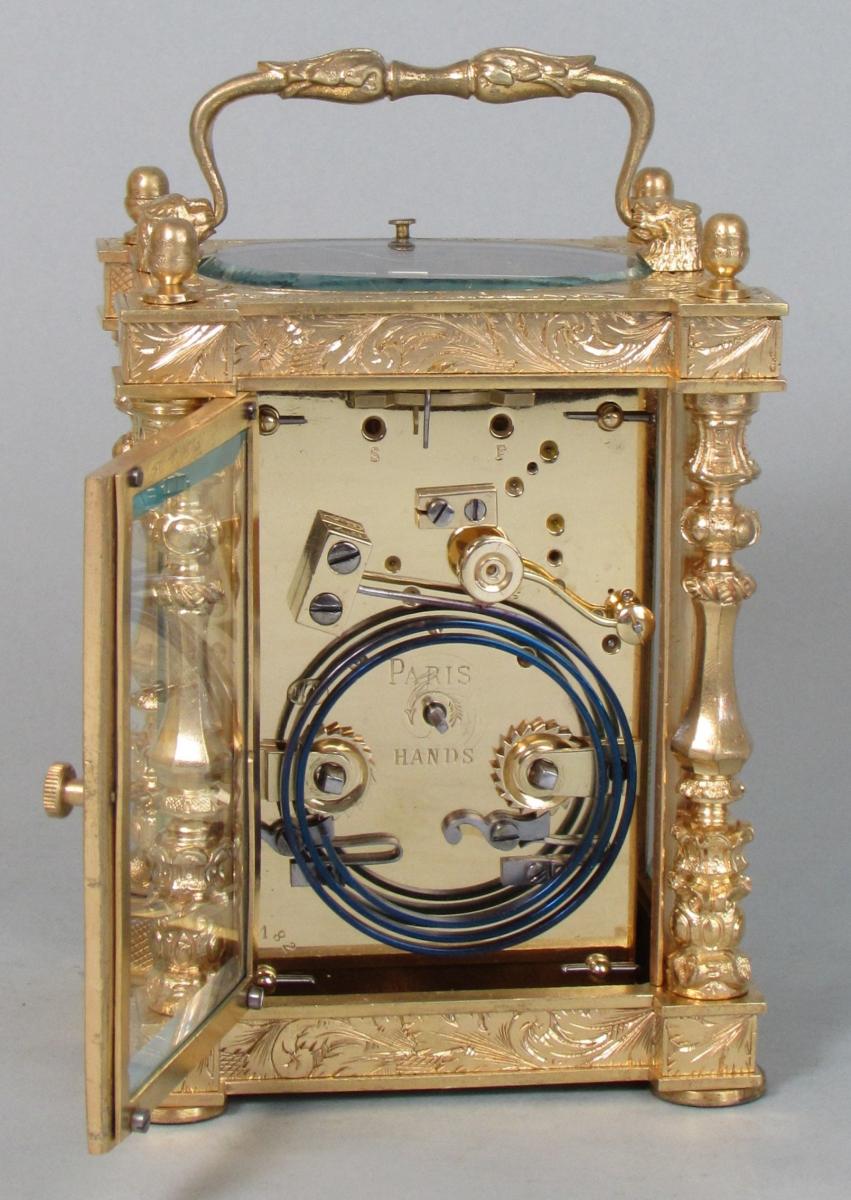 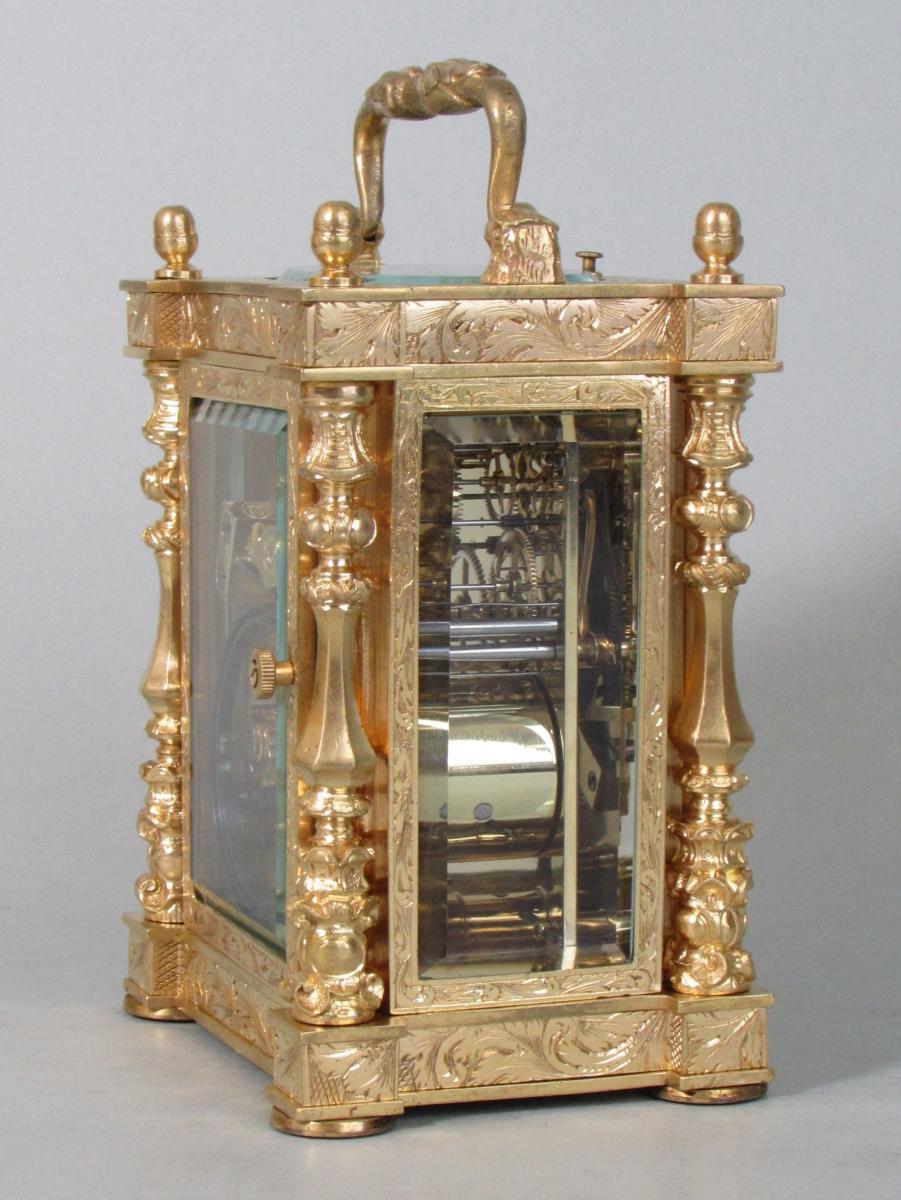 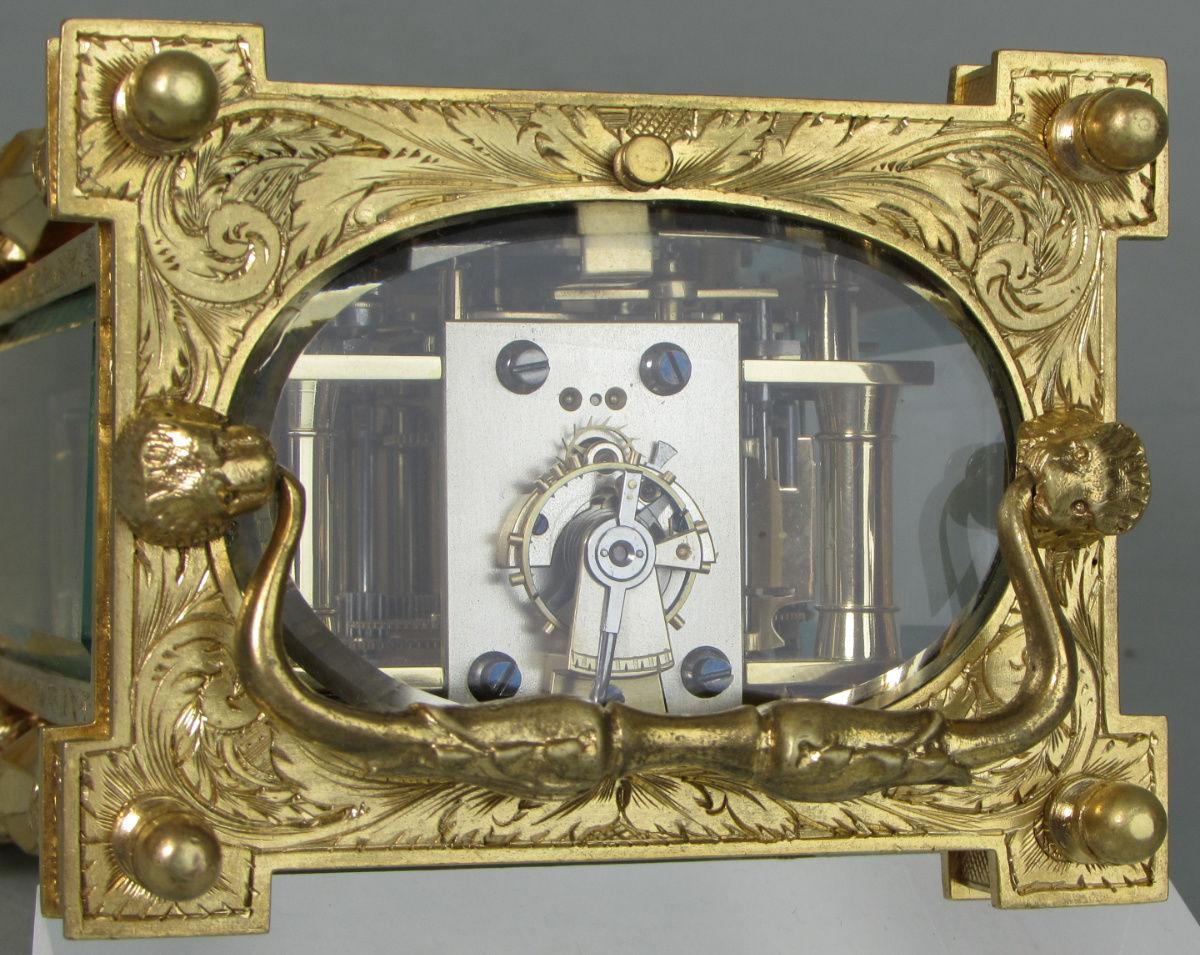 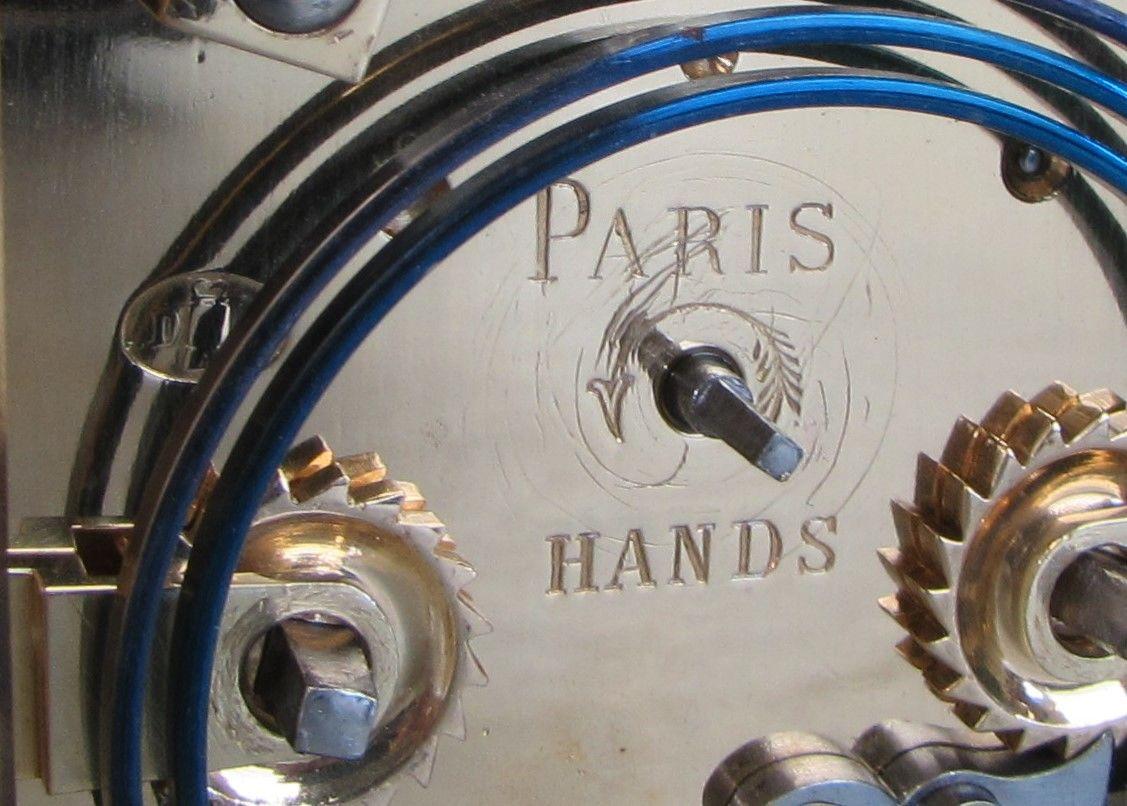 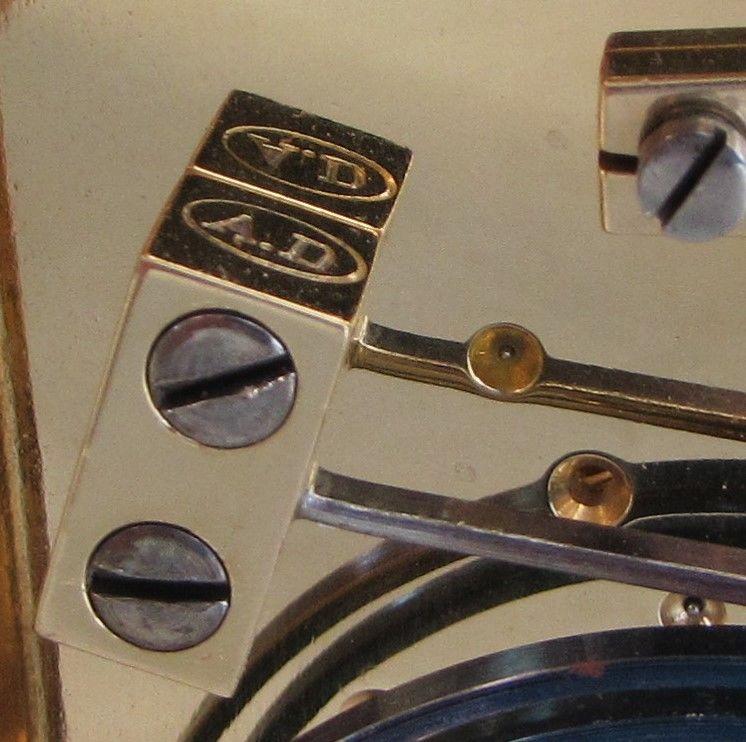 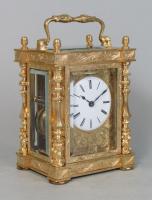 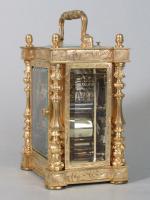 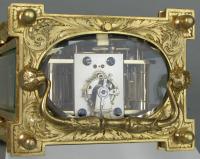 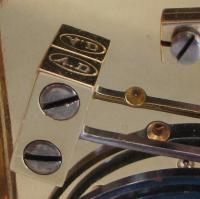 An unusual engraved, pillared carriage clock with a case reminiscent of a style made by a number of maker’s, including Brequet, fifty or so years earlier in the 1840s, the serial number for this example dating it to circa 1896. Indeed, it could be said that it isn’t even a copy as such but an exact model that quite probably came from the same castings as those early versions; the large oval top glass is a typical early feature of this case style as are the lions head handle supports and case pillar design. The base is stamped with the case number 480.

The eight-day duration movement has a silvered platform lever escapement and strikes the hours and half-hours on a gong, with push button repeat of the last hour at will, the brass gong block stamped with the gong maker's initials A.D. The backplate is stamped with the Drocourt trademark, the initials D.C. either side of clock within an oval, along with the serial number 29182 and the place name stating Paris.

The round white dial has black Roman numerals which are far finer than those seen on other Drocourt clocks of this period and are themselves a throw-back to an earlier era when Petremand, Valat and then Mojon where the principal dialmakers for the top makers. The dial is complete with a matching engraved gilded mask and blued steel spade hands.

The case is almost Empire in design and similar models found in research all date from the earlier period. Lodovico Magistretti and Luigi Pippa in I Ritmi del Tempo, published 1998, show various examples on pages 138, 143, being with the Lion’s Head handle pieces and another on page 243, the latter signed for Lamy & Lacroix a Morez and having identical pillars which surely came from the same casting as this example. Derek Roberts in Carriage and Other Travelling Clocks, published 1993, describes further early examples on pages 83 and 243, the latter also being signed for Lamy & Lacroix a Morez, which are described as Renaissance clocks dating from 1835 to 1845.

Pierre Drocourt, born 1819 & his son Alfred, born 1847, were one of the top maker's of carriage clocks in the mid to late Victorian period, having a factory at Saint-Nicolas-d'Aliermont, the most important town for carriage clock manufacture at the time, as well as premises in Paris at Rue Debelleyme 28; previously named Rue de Limoges prior to 1867, where he joined the well-known maker Blanpain. They made superb carriage clocks which were often decorative and were awarded numerous medals at exhibitions, such as the Bronze Medal at Paris 1867, the Silver at Paris 1878 and the gold at Paris in 1889. Alfred succeeded his father Pierre in circa 1871, with the latter’s retirement when he returned to his home village with his wife Marie and daughter Melanie. For further details on the Drocourt family and their clocks see my 2014 Exhibition catalogue: Pierre & Alfred Drocourt: An Exhibition of Carriage Clocks, available via the Catalogue page on my website.