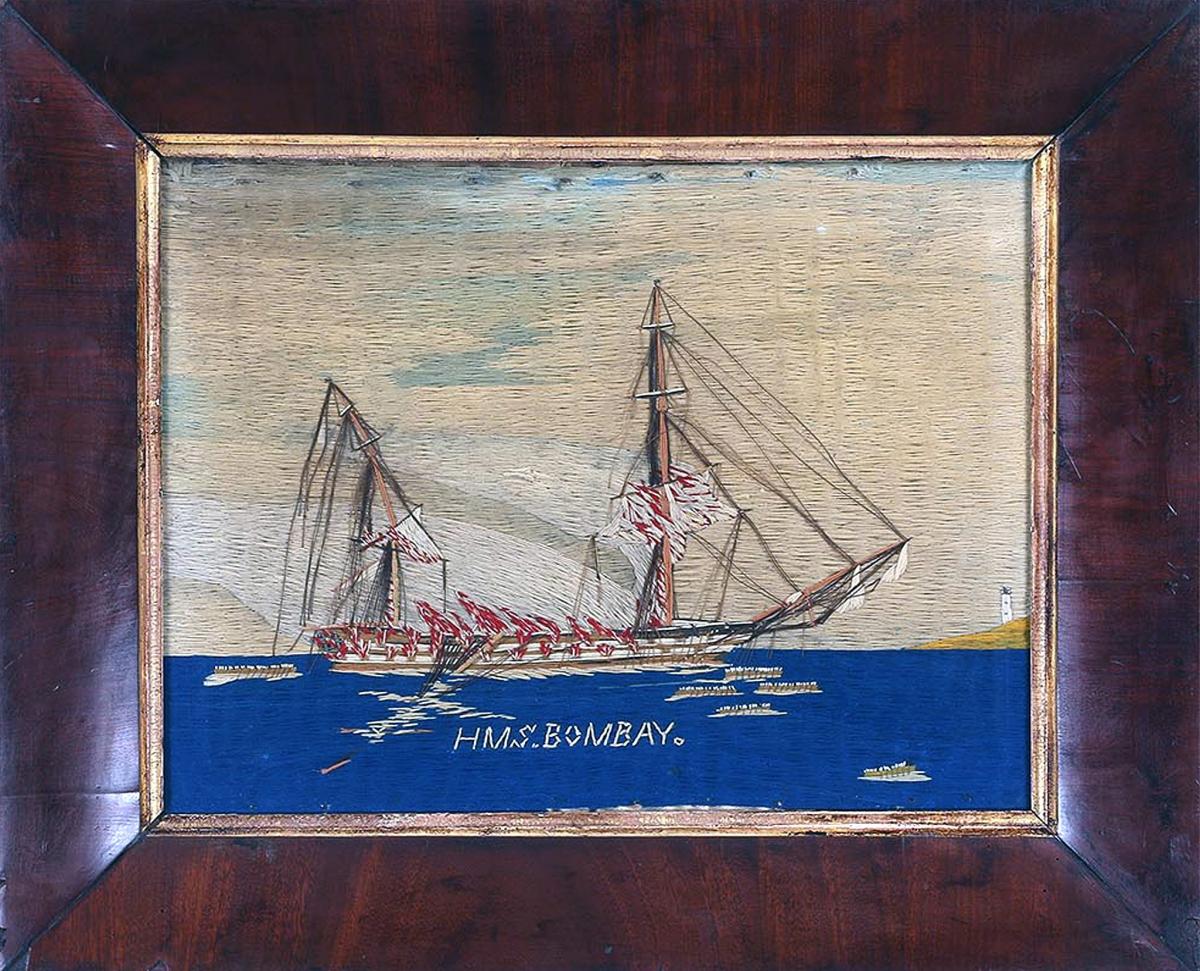 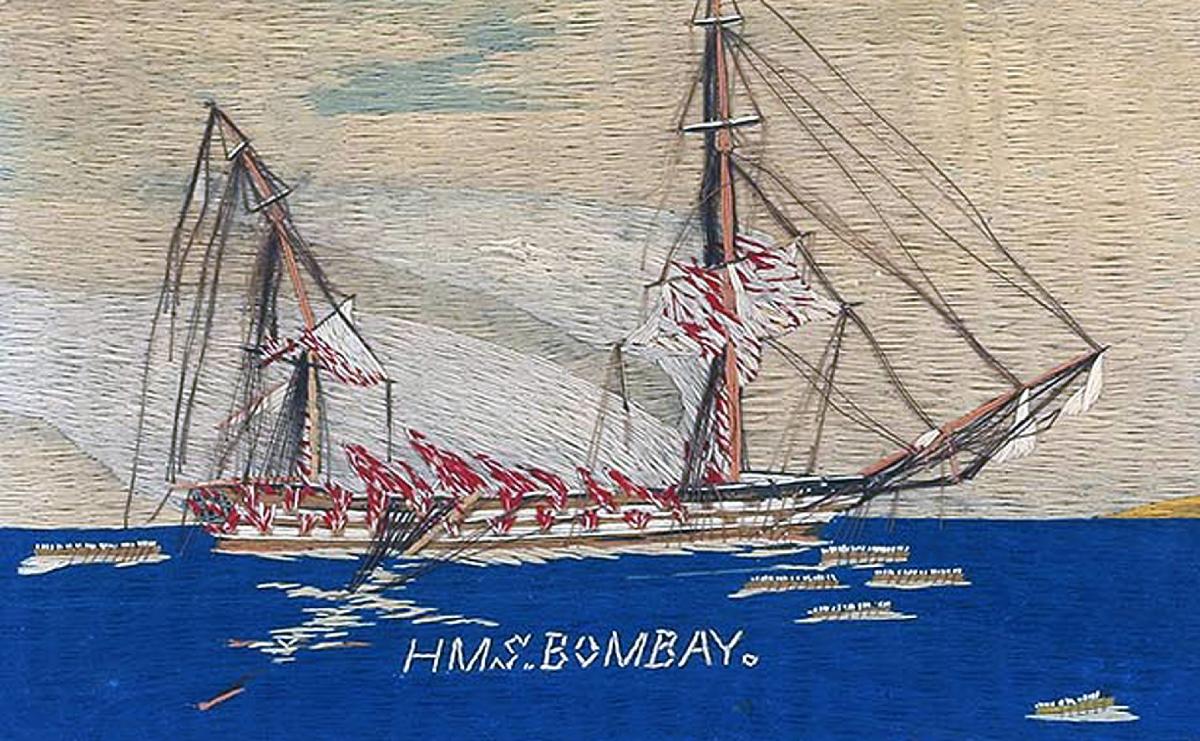 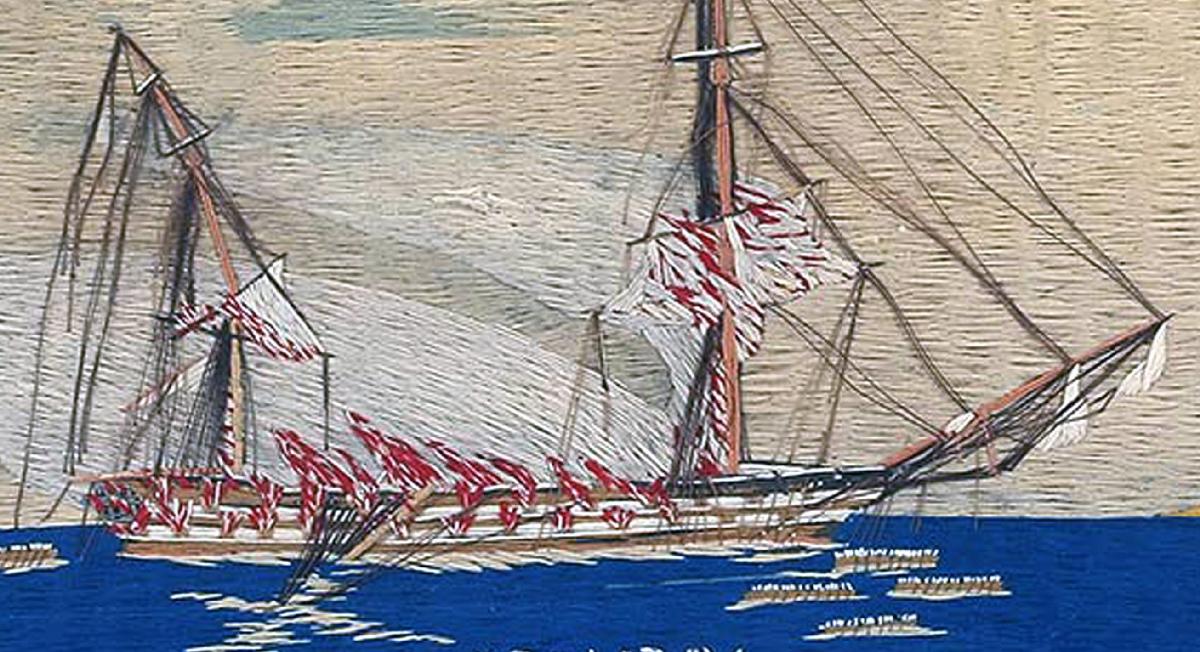 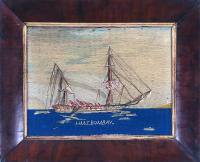 The woolie depicts H.M.S. Bombay, a Canopus-class ship of the line, on fire with many small longboats with men at the oars surrounding the ship which is on fire and its masts collapsing and men jumping off the stern of the ship.

The ship was destroyed in a fire on the River Plate, in a freak target practice accidenent. Her efficient ventilation system spread the fire of unknown origin during the target practice off Uruguay, near Isla de Flores, near Montevideo in the River Plate on 14 December 1864, destroying her and costing the lives of 93 of her 619 crew.

The third HMS Bombay launched in 1828 was an 185-footer, 84-gun second rate frigate of the Royal Navy, and had three masts and displaced 2285 tonnes. She was a Canopus-class ship of the line.

On 8 December 1864, members of the crew fielded a rugby side to play against the Buenos Aires Cricket Club in their first official rugby game and opening of the BACC's new game field in Parque Tres de Febrero in Palermo, Buenos Aires, located where the Galileo Galilei planetarium is today.

Built at the Bombay Dockyard, with a crew of 575 including officers. Reduced to 70 guns after five years of service. She was lengthened and fitted with a propeller in 1860-62. Commanded by Captain Colin Andrew Campbell, flagship of Rear-Admiral Charles Gilbert John Brydone Elliot, south-east coast of America. She suffered a fatal accidental fire 14 miles off Montevideo, Uruguay in 1864.

There is a painting by William Loney RN called. "Loss of Her Majesty's ship Bombay."

Interestingly, HMS Minden, an Indian teakwood vessel, was the first ship to be launched from Duncan Dock at the Bombay Dockyard. This was also the first ship commissioned in the Royal Navy from India. 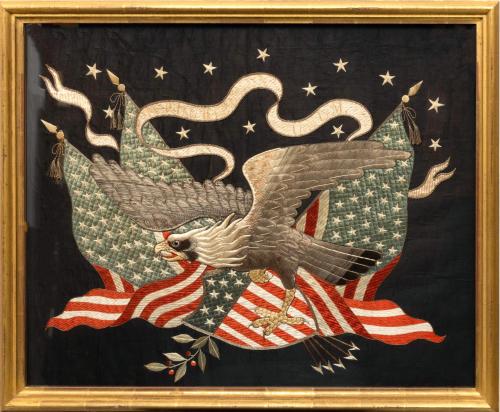 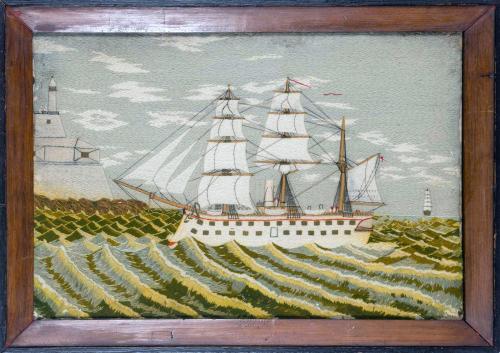 British Sailor's Woolwork Picture of a Ship on Unusual Green Sea, Circa 1875-85
Earle D Vandekar of Knightsbridge, Inc
View all from this dealer