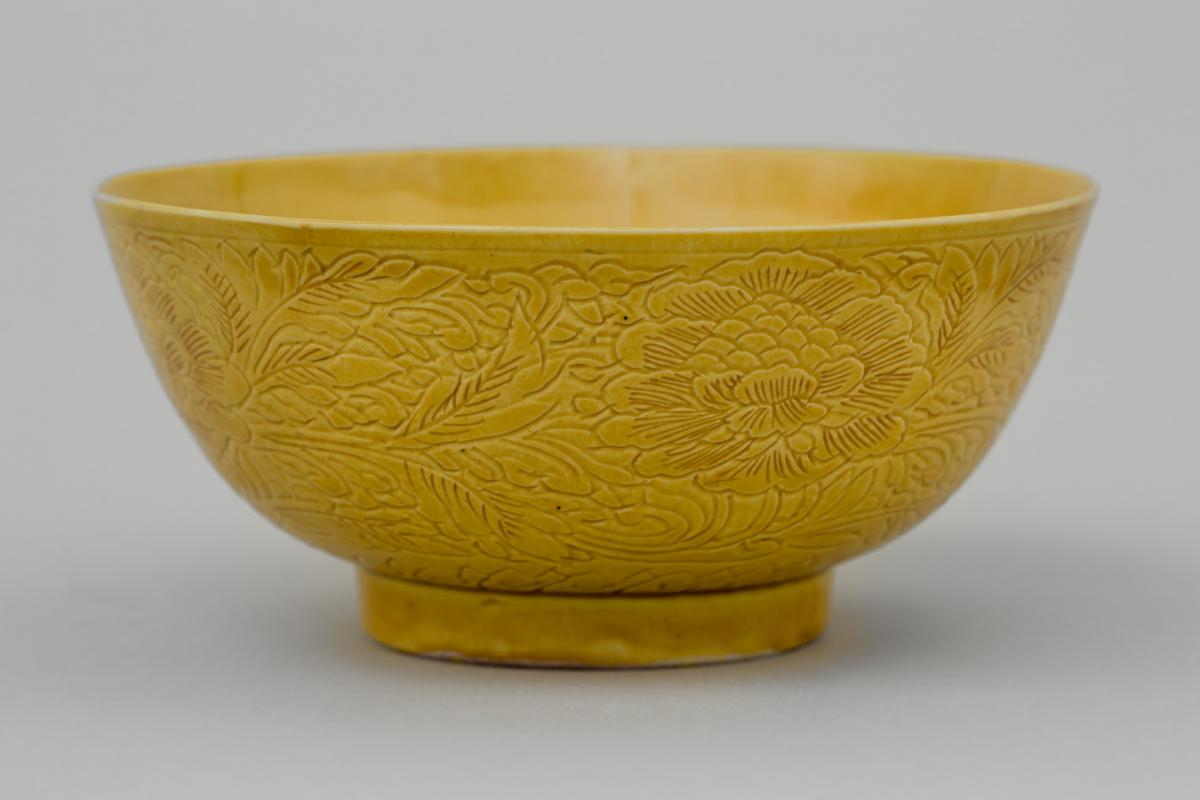 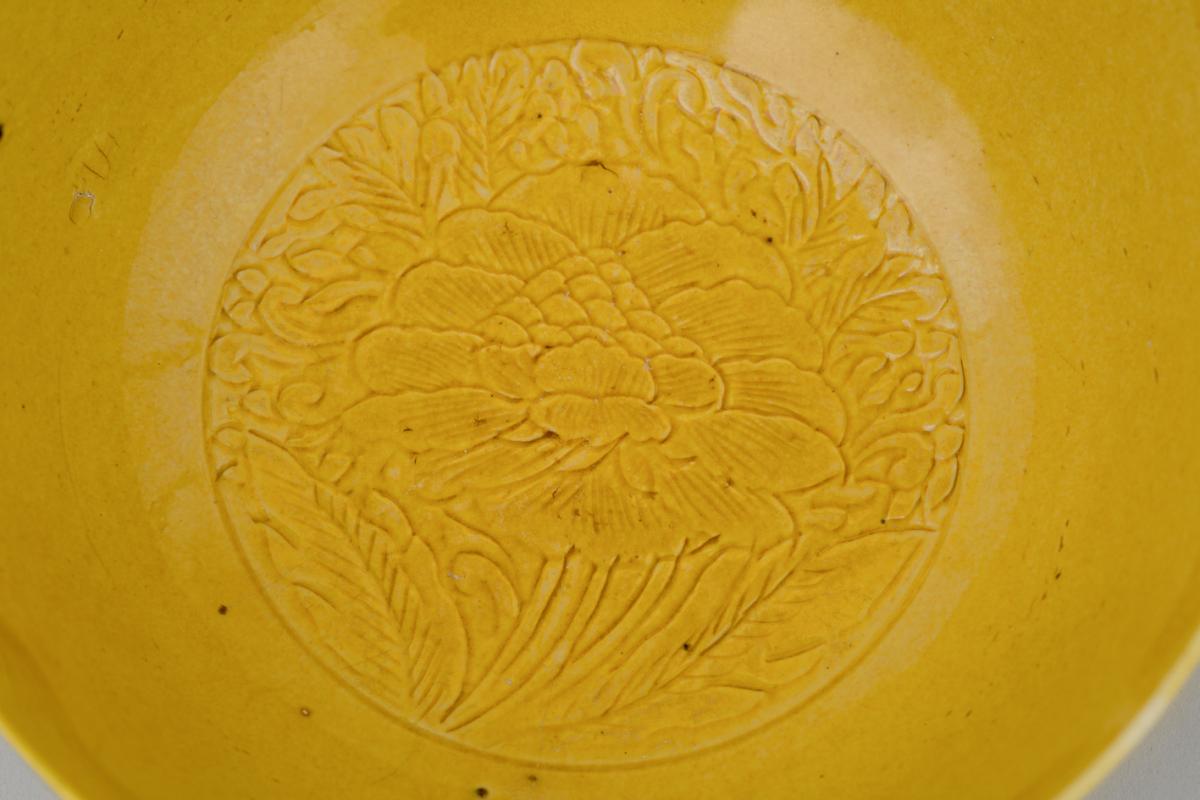 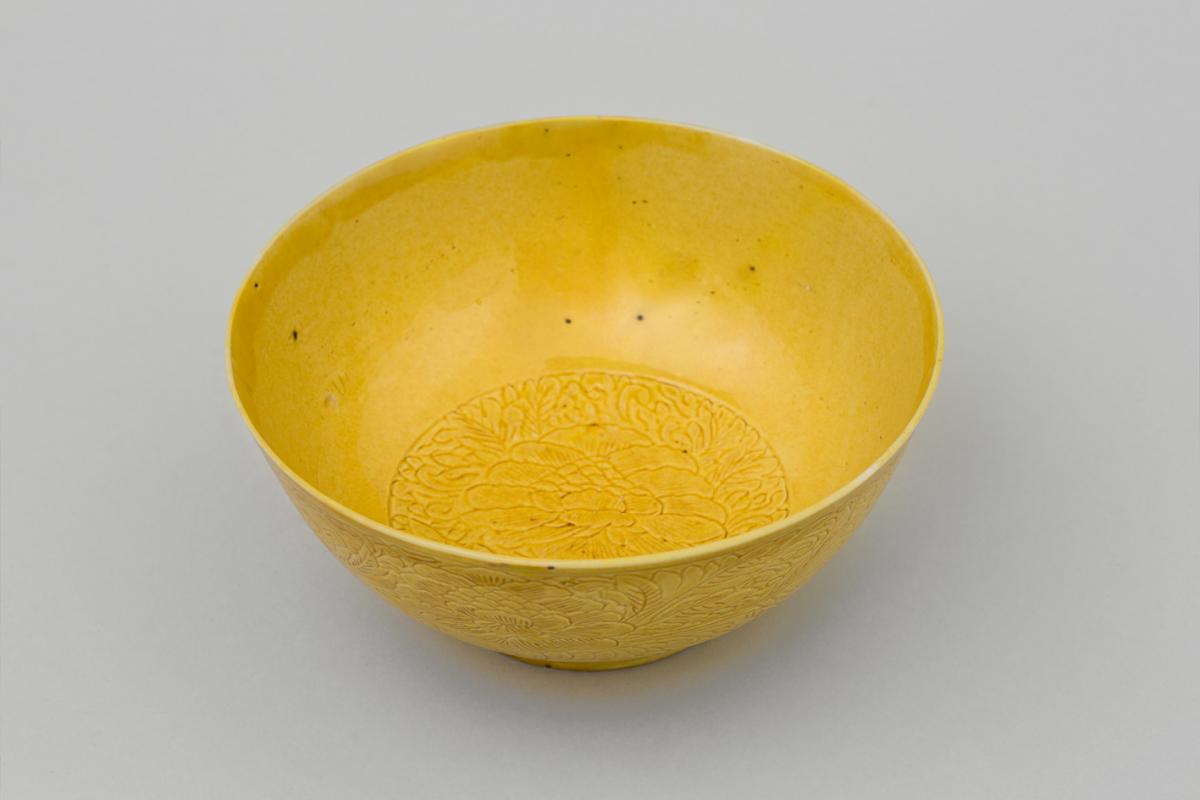 Of round form with deep rounded sides rising from a short straight foot, finely incised with a peony scroll design on the exterior and an incised spray in a central roundel on the interior, the interior rim banded with flower-head and triangulated cross-hatched lines, the exterior rim and foot-ring incised with two narrow lines, covered  inside and out in yellow glaze directly on the biscuit, the base in a white glaze, painted with an underglaze blue tripod mark, and attached with collector’s and exhibition labels reading ‘The Leonard Gow Collection, 107’ and ‘Glasgow Art Galleries & Museums. Reg. No. E6-36…’.

Leonard Gow (1859-1936) was born in Glasgow, the son of a shipping magnate also called Leonard, who established the Glen Line to trade between London, Singapore, China and Japan. The younger Leonard attended Glasgow University in 1884 to spend a year studying Moral Philosophy. He became senior partner in the shipping company Gow, Harrison & Co, director of the Burmah Oil Co and chairman of several other companies. A noted philanthropist, he founded the Leonard Gow Lectureship on Medical Diseases of Infancy and Childhood in 1919. He was given an honorary degree in 1934.

Gow was one of the city’s greatest art collectors, specialising in pictures, etchings and Chinese porcelain. In 1965 the trustees of his estate presented a collection of prints by the Glasgow artist Muirhead Bone to the Hunterian Art Gallery.

Roy Davids and Dominic Jellinek write in Provenance: Collectors, Dealers and Scholars in the Field of Chinese Ceramics in Britain and America, published by Roy Davids, 2011, about Leonard Gow and his collection of Chinese ceramics and we quote: “Gow built one of the finest collections of Qing ceramics in the early years of the twentieth century, its sumptuous catalogue being published by R.L. Hobson in 1931, limited to 300 copies, selling then at £26.5s and now at £1500 or more. Hobson had earlier produced a series of ten illustrated articles on Gow’s collection for the Burlington Magazine, 1920-1924. Hobson described the collection as one that ‘for quality may claim to be the equal of any of its kind that has ever been formed in Europe’. Gow was one of the first collectors to produce his own catalogue. The collection included a few pieces of Ming porcelain but the great majority were Qing, and mainly of the Kangxi period…Gow confidently declared: ‘there is nothing in ceramic art, either in Europe or the East, at any epoch, comparable with the superb products of the Chinese kilns, and especially those of the K’ang Hsi period, of which the Collection almost entirely consists.’ Gow lent 56 items to the Royal Academy Exhibition, 1935-1936; part of his collection was exhibited Glasgow Art Gallery; and much of it was sold at Sotheby’s on 13 May 1943, 125 lots, with some provenances given: Richard Bennett, Kennedy, Sir William Bennett, Heseltine, J. E. Taylor and Beurdeley.”