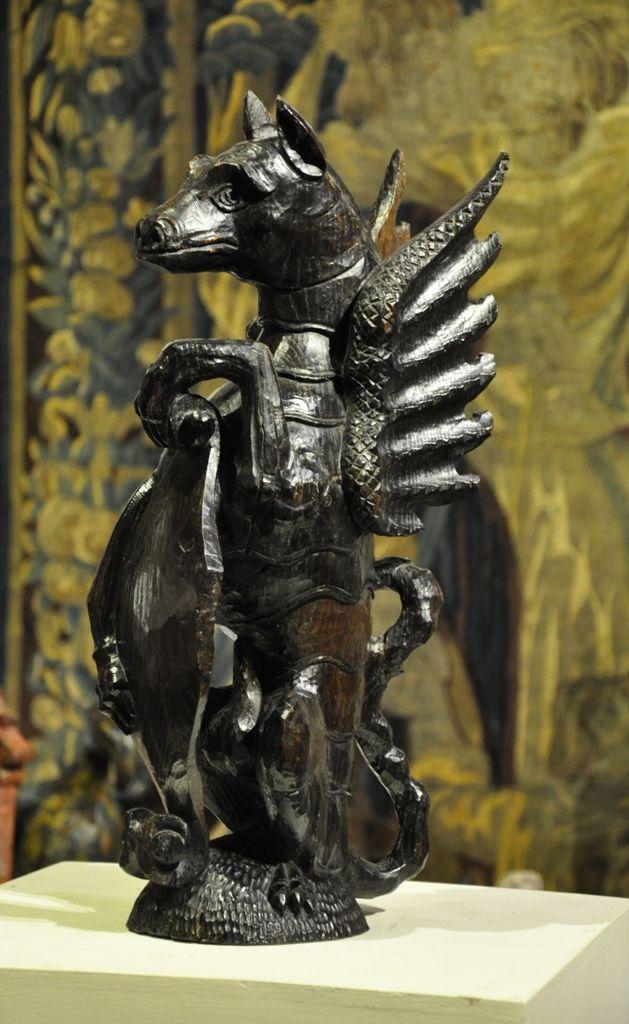 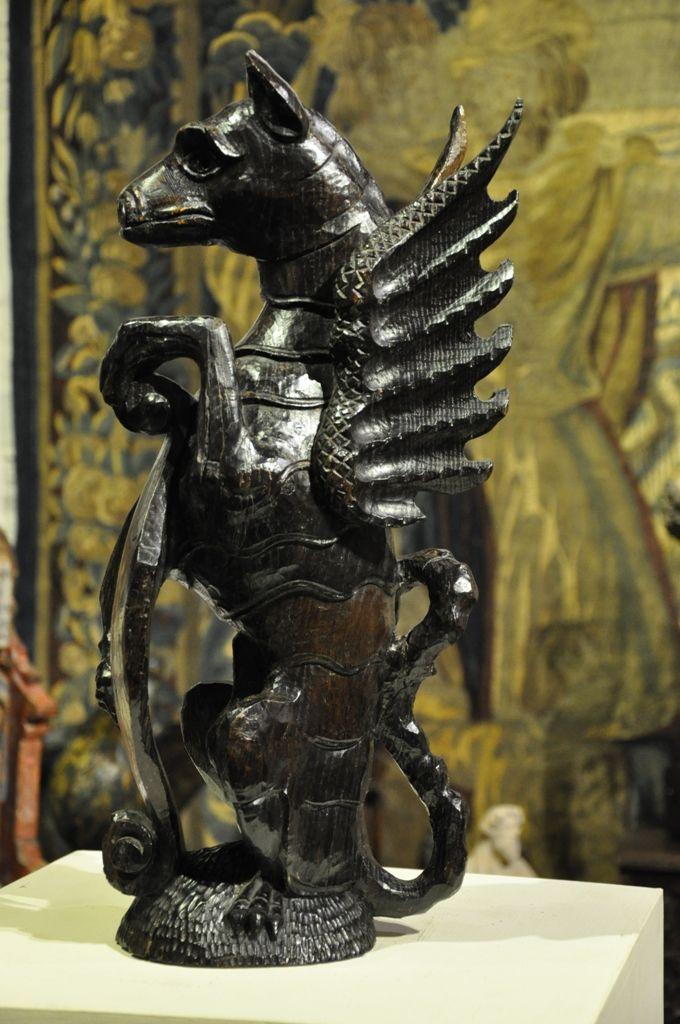 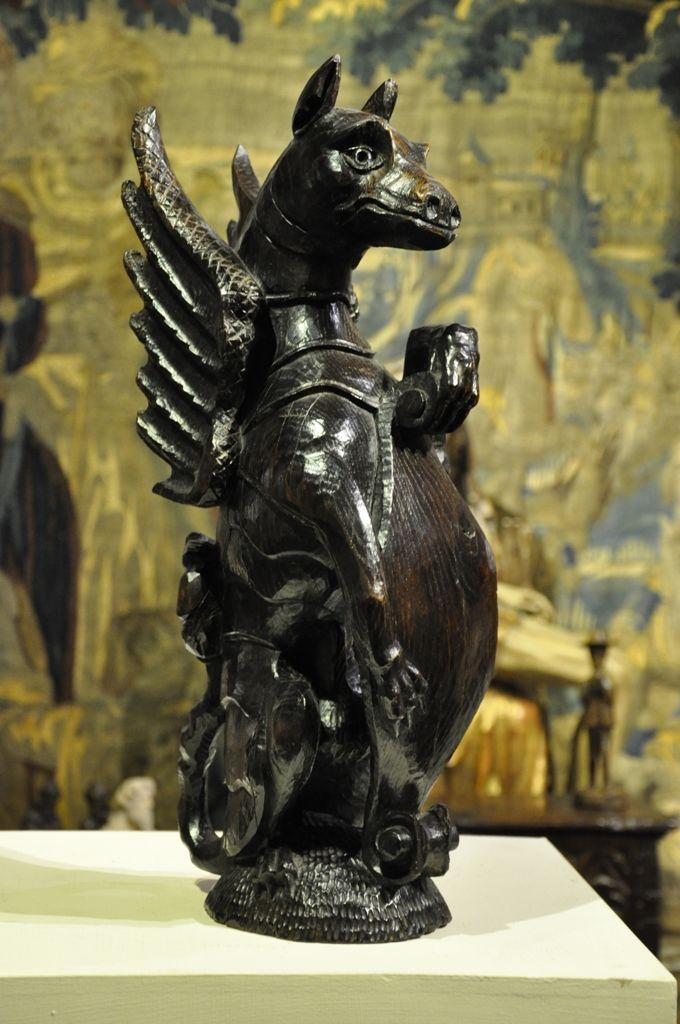 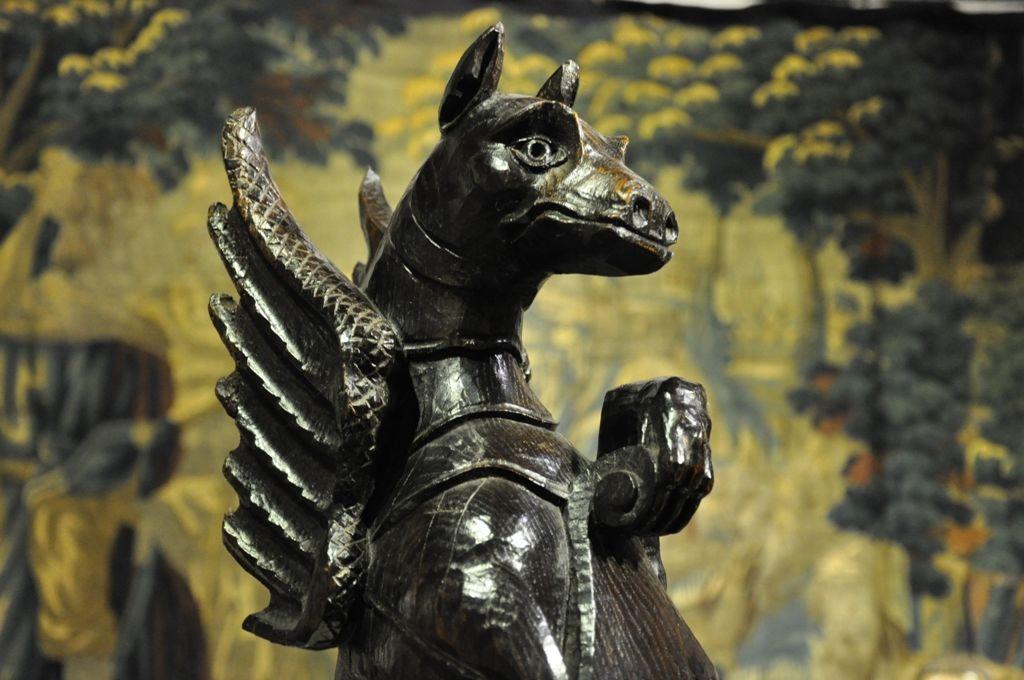 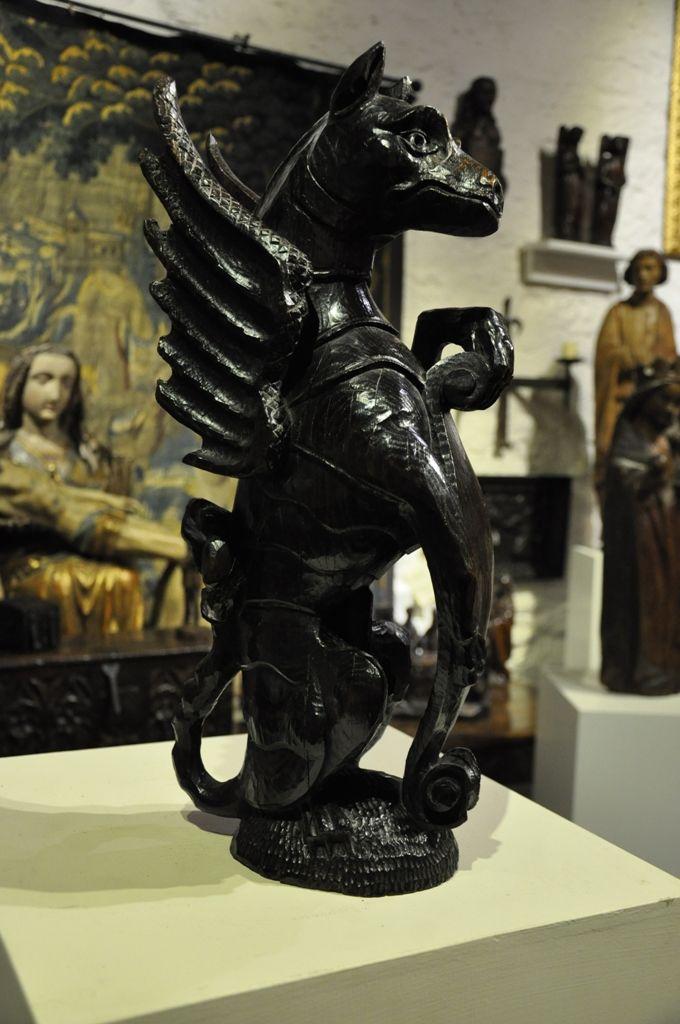 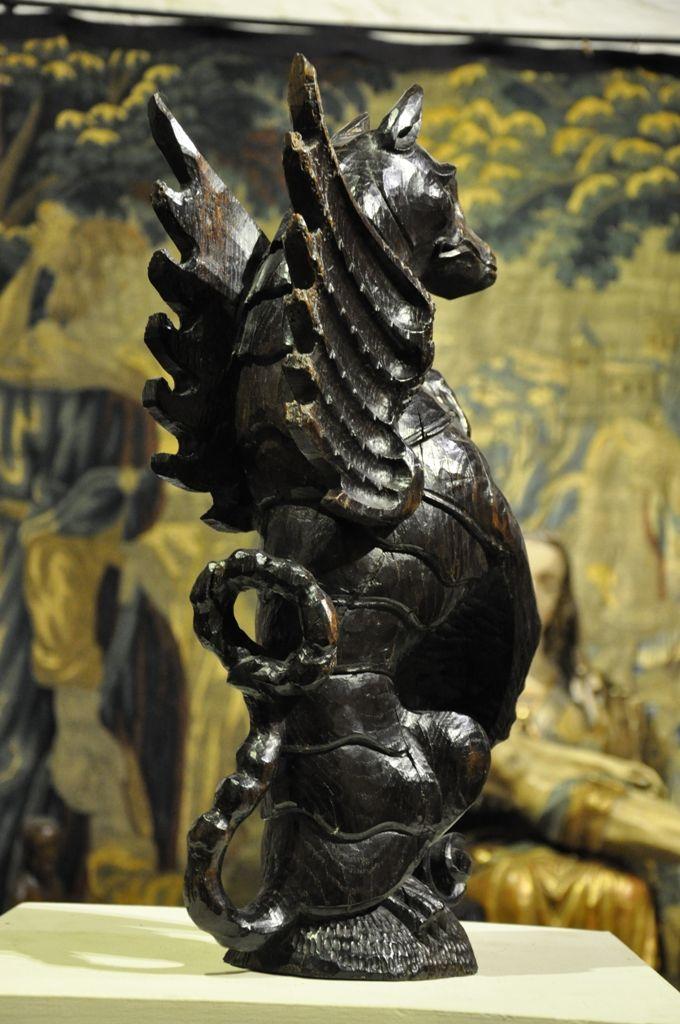 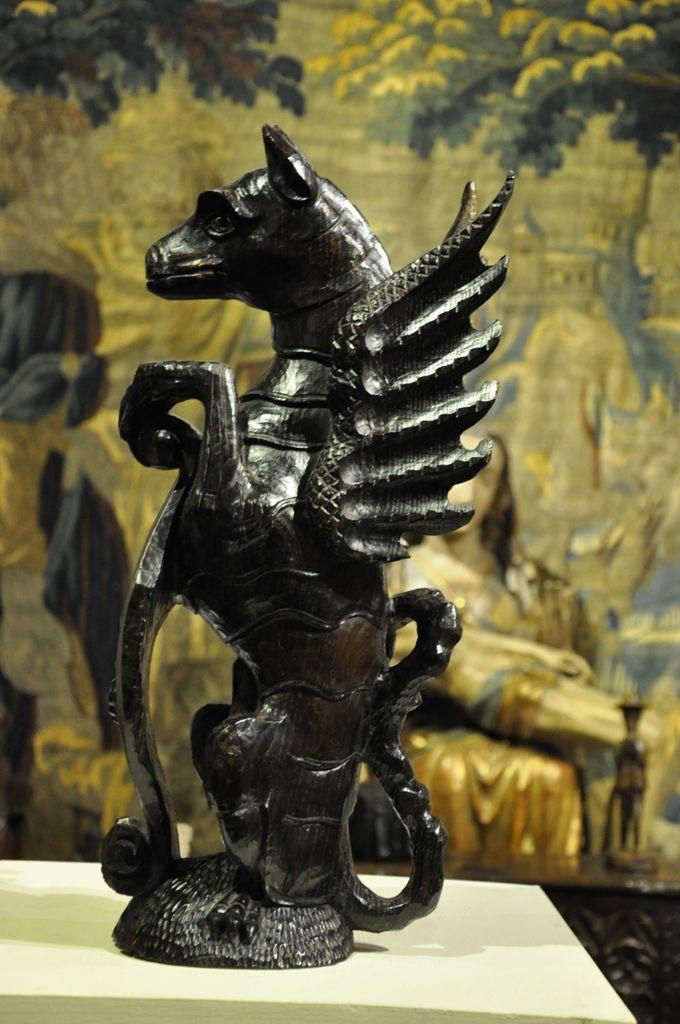 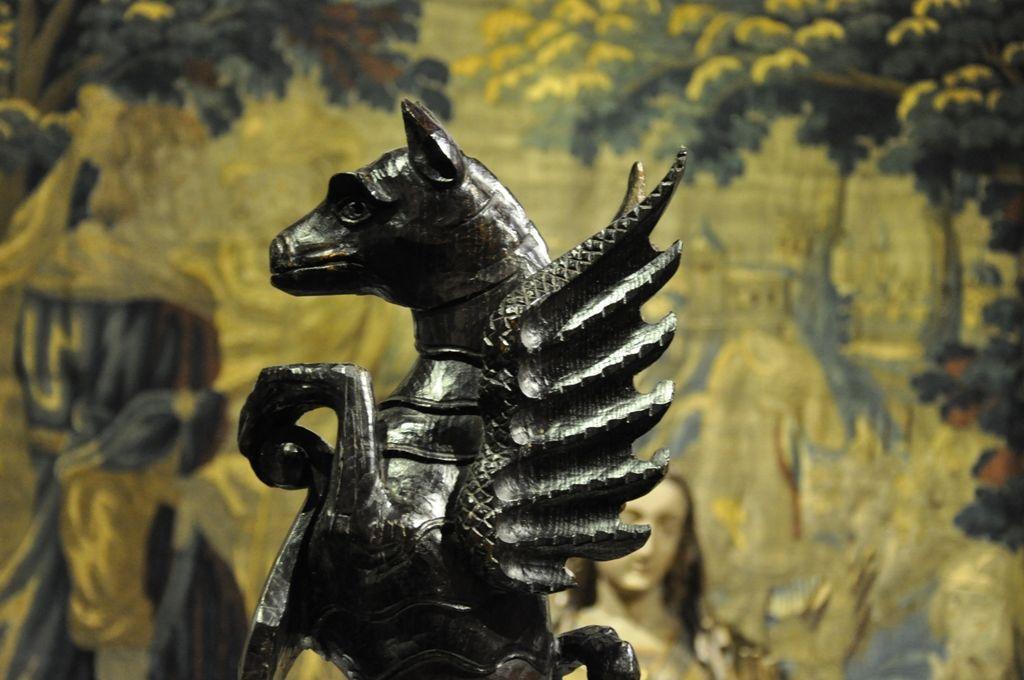 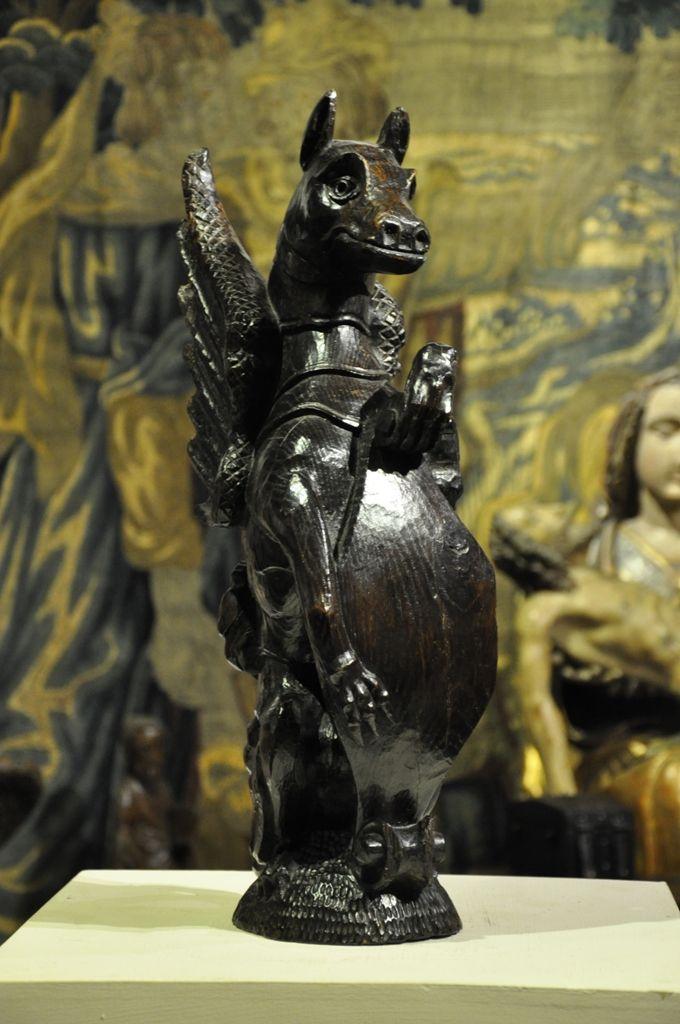 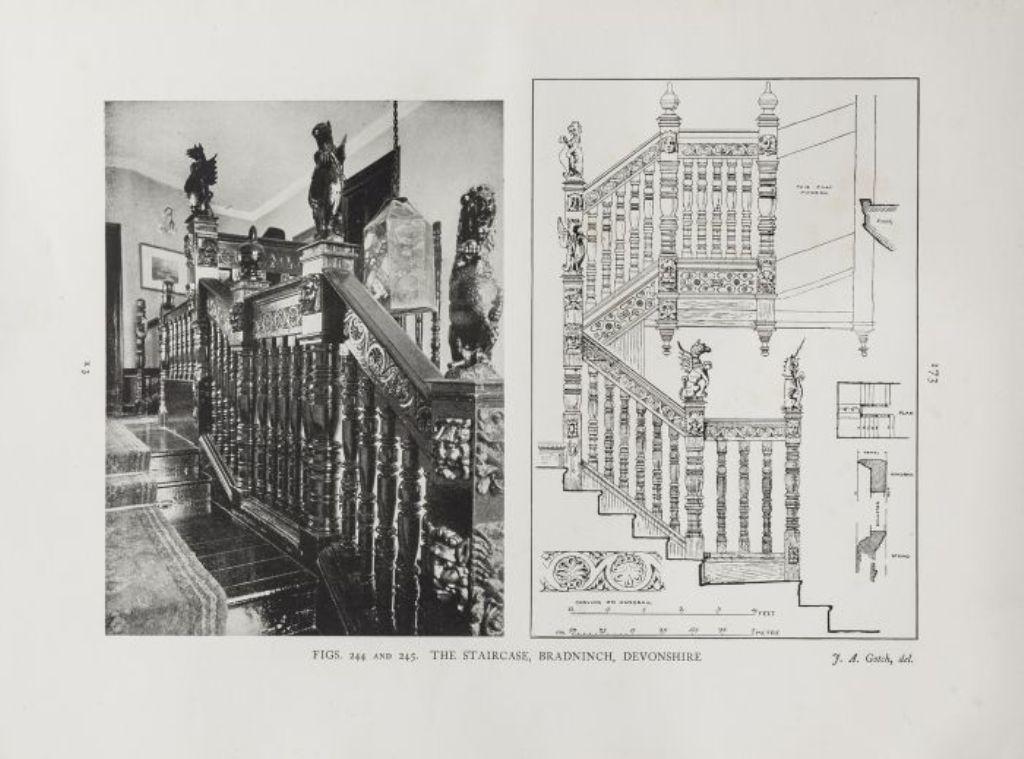 THIS STUNNING TUDOR OAK DRAGON FROM THE HENRY VIII PERIOD IS SCULPTURED IN GREAT DETAIL. IT IS EXTREMELY RARE TO SEE A DRAGON USED ON A GREAT STAIRCASE. THIS FINE EXAMPLE WAS PICTURED AND DOCUMENTED IN M JOURDAINS BOOK, ENGLISH DECORATION AND FURNITURE OF THE EARLY RENAISSANCE,1924 PLATE 244. SHOWING IN SITU IN BRADNINCH MANOR, DEVON.

Bradninch dates back to before the 7th century and at some time there was almost certainly a Norman or Saxon fortress on Castle Hill. There are no physical remains, and no known primary documentary references, but the likely site was surrounded by a number of ′castle′ field names on the tithe map. It would have been unusual for Bradninch not to have had a castle given its status in the medieval period.[6]


Bradninch was the caput of the feudal barony of Bradninch granted by William the Conqueror (1066–1087) to William Capra, who is listed in the Domesday Book of 1086 as holding this manor. The barony escheated to the crown and King Henry I(1100–1135) granted it to his illegitimate son William I de Tracy (d.circa 1136). He left one daughter and sole-heiress Grace de Tracy who married John de Sudeley,[7] They had two children: Ralph de Sudeley (d. 1192), the eldest, who became his father′s heir, and Sir William II "de Tracy" (d. post 1172), who inherited his mother′s barony of Bradninch and assumed her family name in lieu of his patronymic.[7]He married Hawise de Born and had a son William III de Tracy (d. pre-1194),[7] one of the four knights who assassinated Thomas Becket, Archbishop of Canterbury, in December 1170.

Following the execution of King Charles I in 1649, an Act of Parliament was passed which allowed the sale of the feudal barony of Bradninch (or "honour of Bradninch") together with its caput, namely the manor of Bradninch, together with the borough of Bradninch, and on 24 March 1650 all were sold for the sum of £19,517 11 shillings 10 1/4 pence to Thomas Sanders and John Gorges as trustees for the new Commonwealth. The feudal barony and manor were returned to the Dukedom of Cornwall following the Restoration of the Monarchy in 1660[8]although the feudal element of the holding was effectively extinguished at about the same time by the Tenures Abolition Act 1660. Prince Charles, as the present Duke of Cornwall, remains the nominal lord of the manor of Bradninch, and the theoretical feudal baron of Bradninch, and continues to own much of the land within the parish.