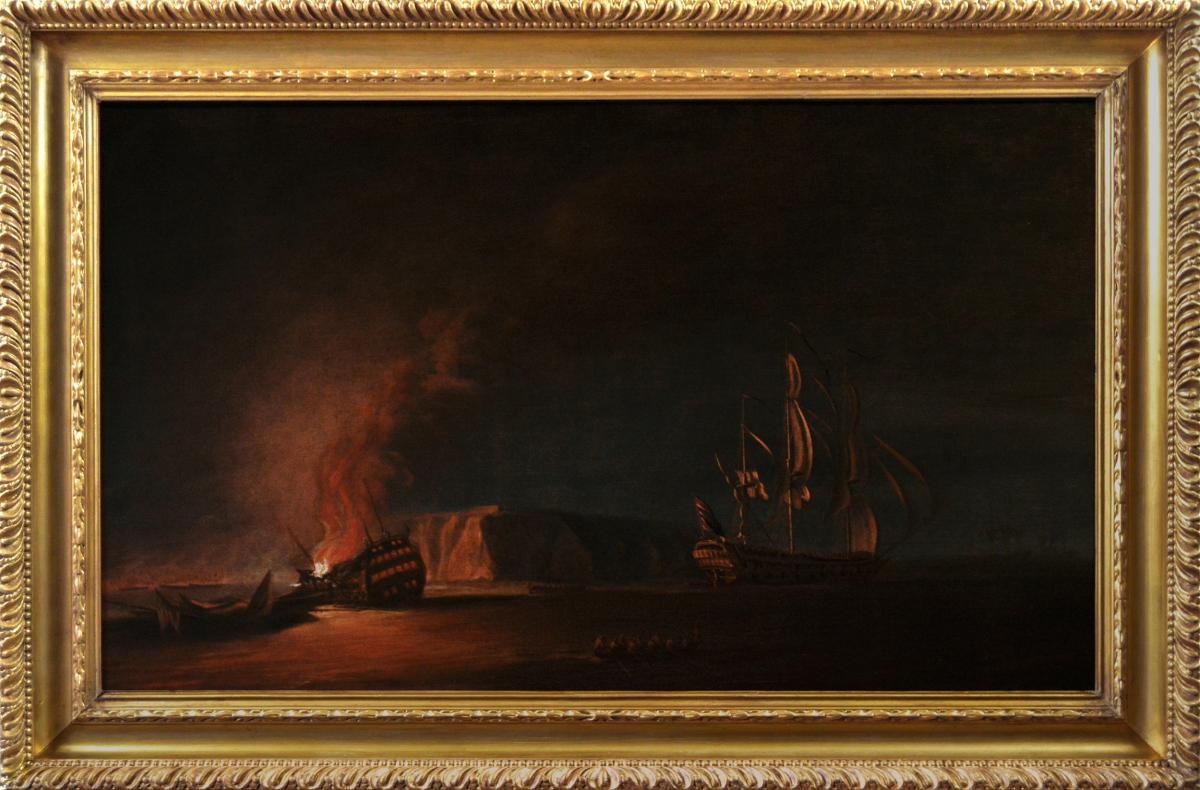 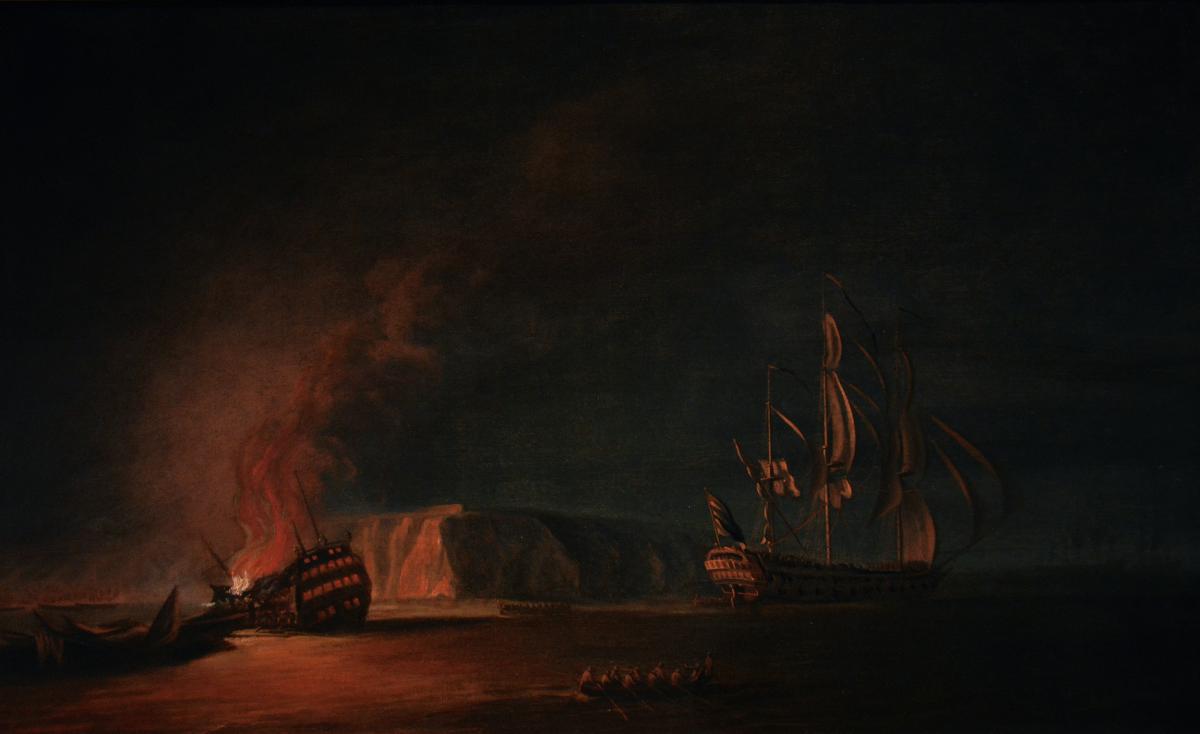 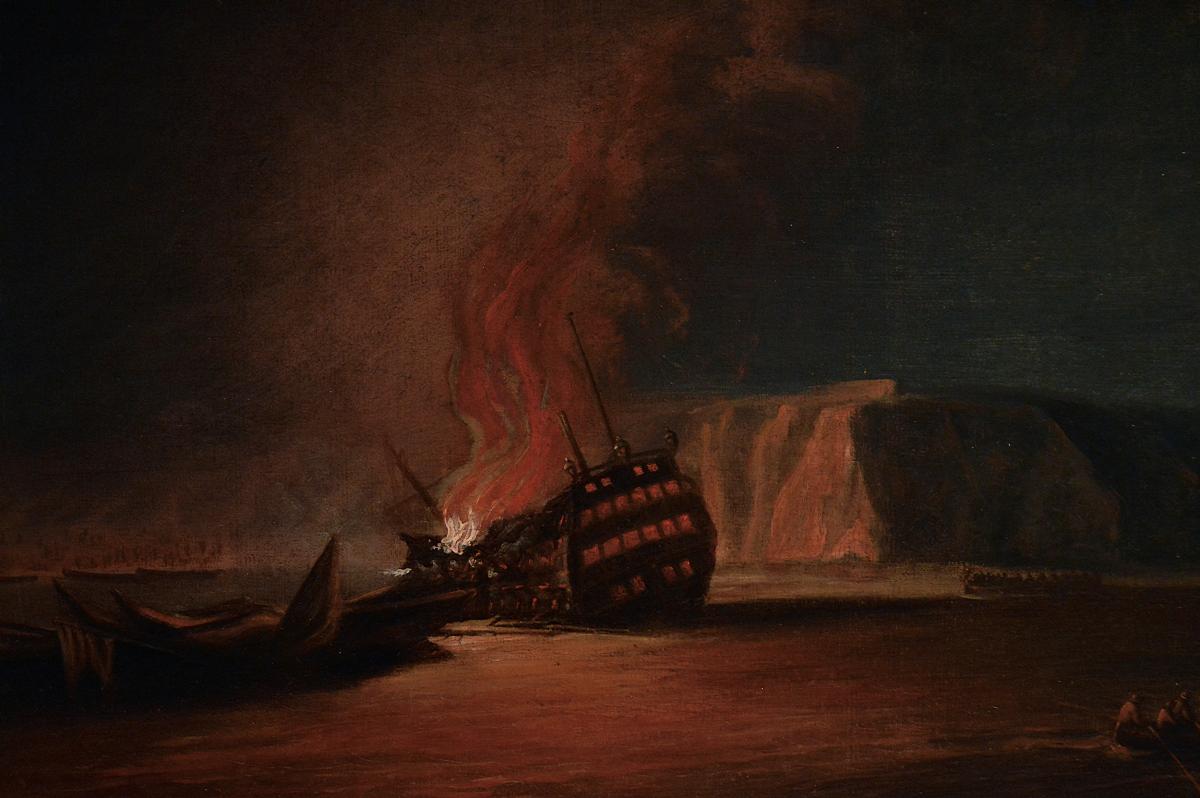 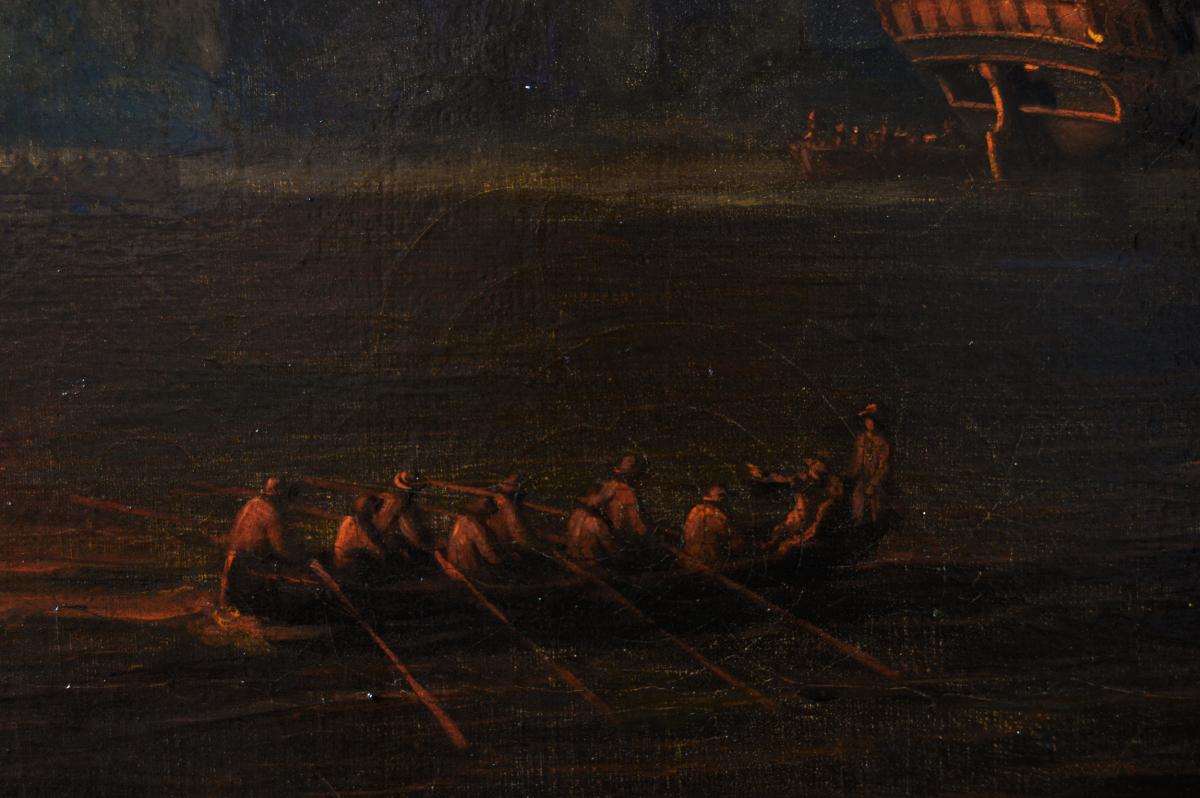 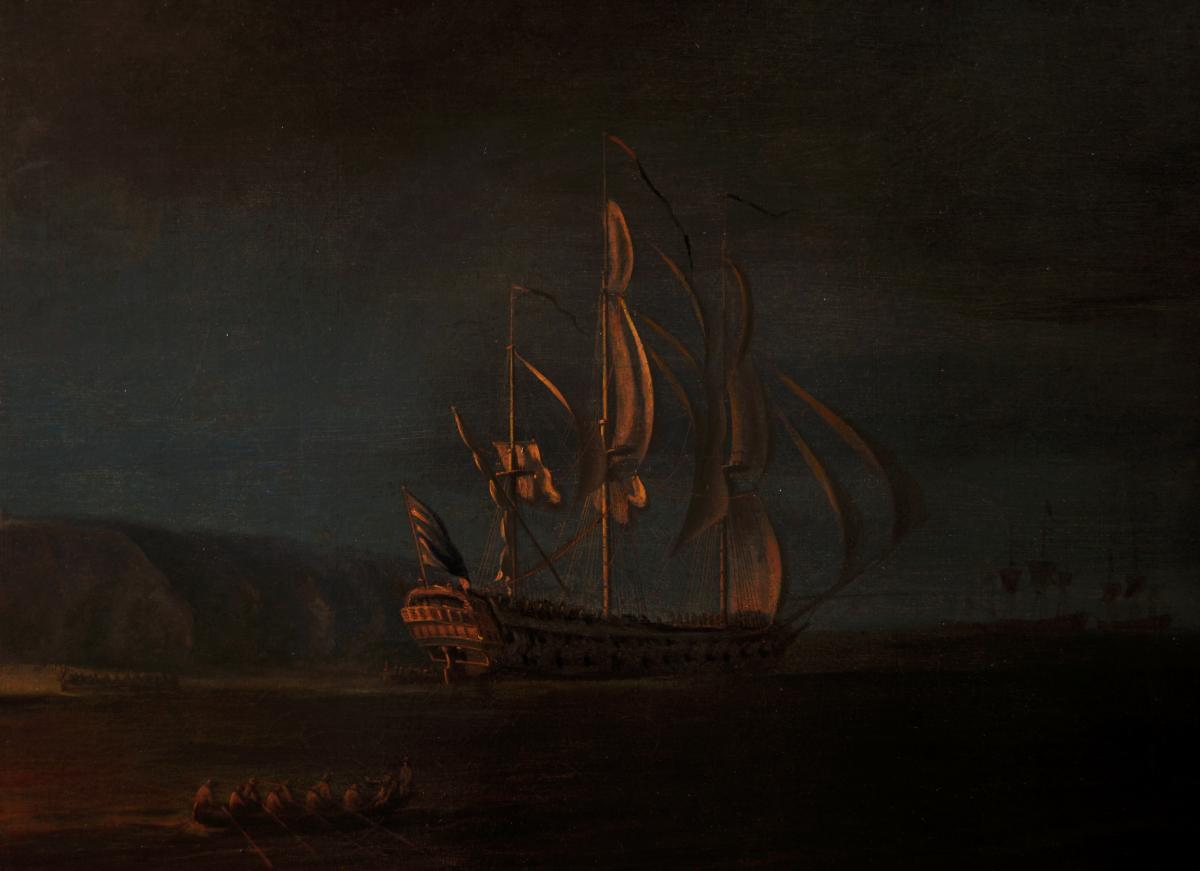 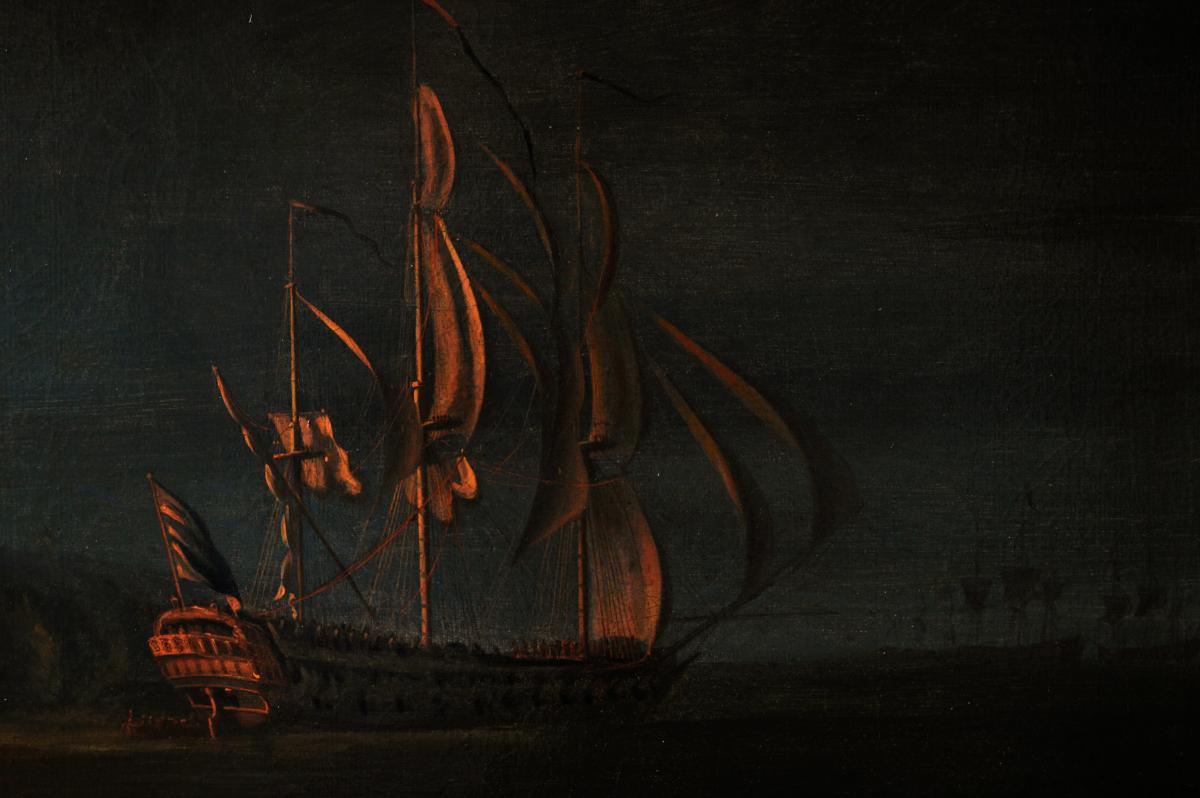 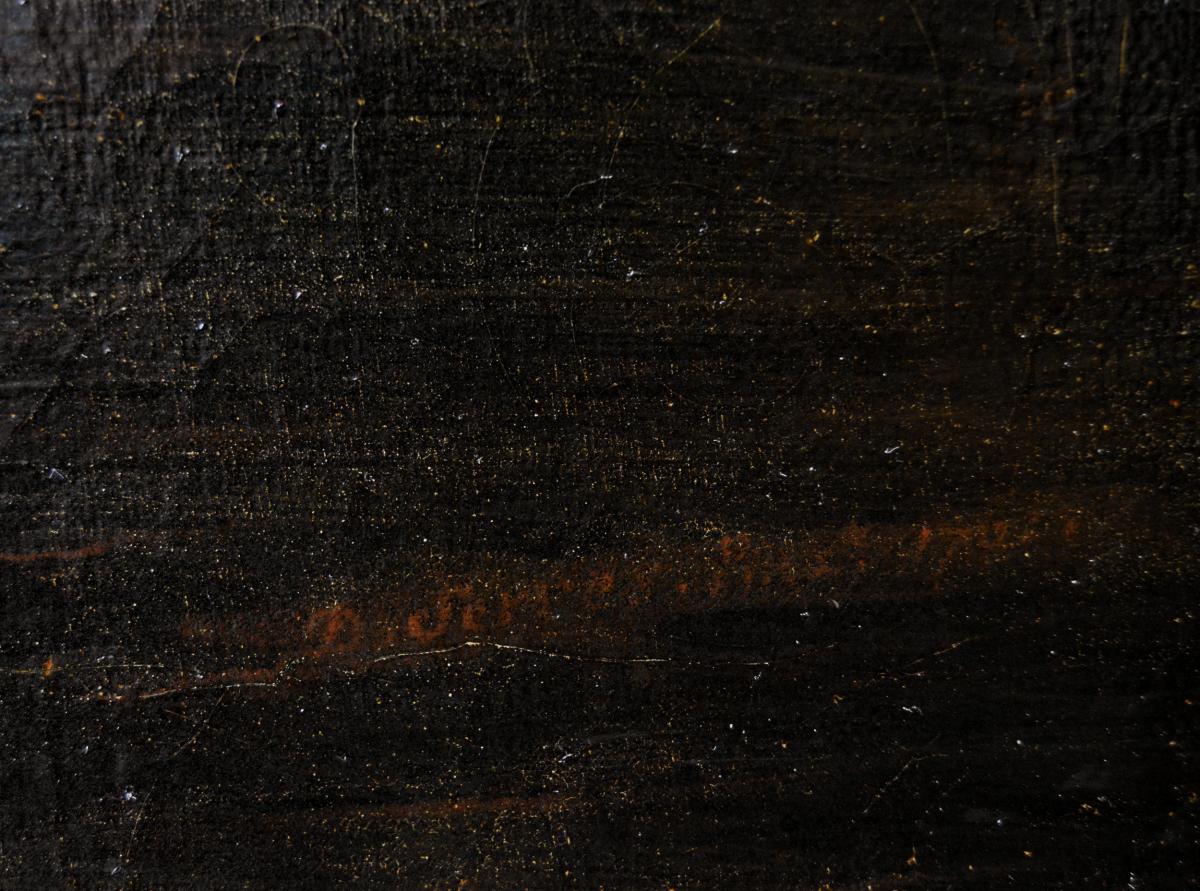 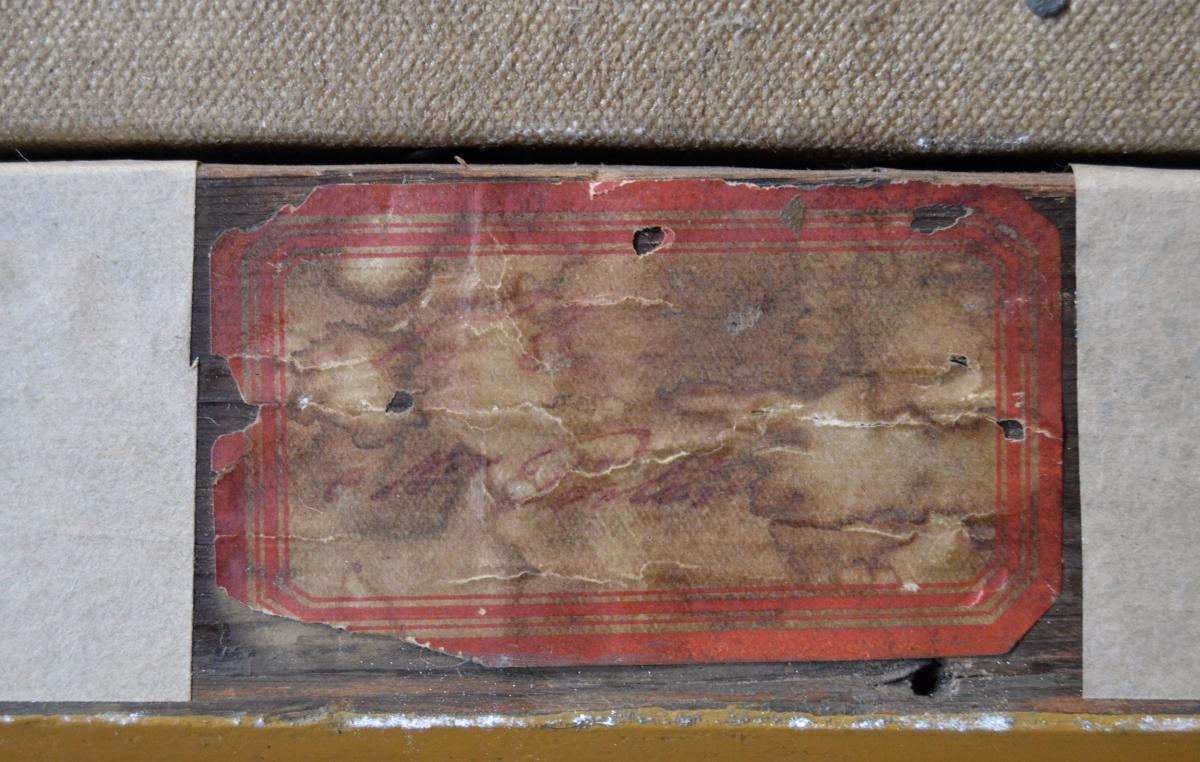 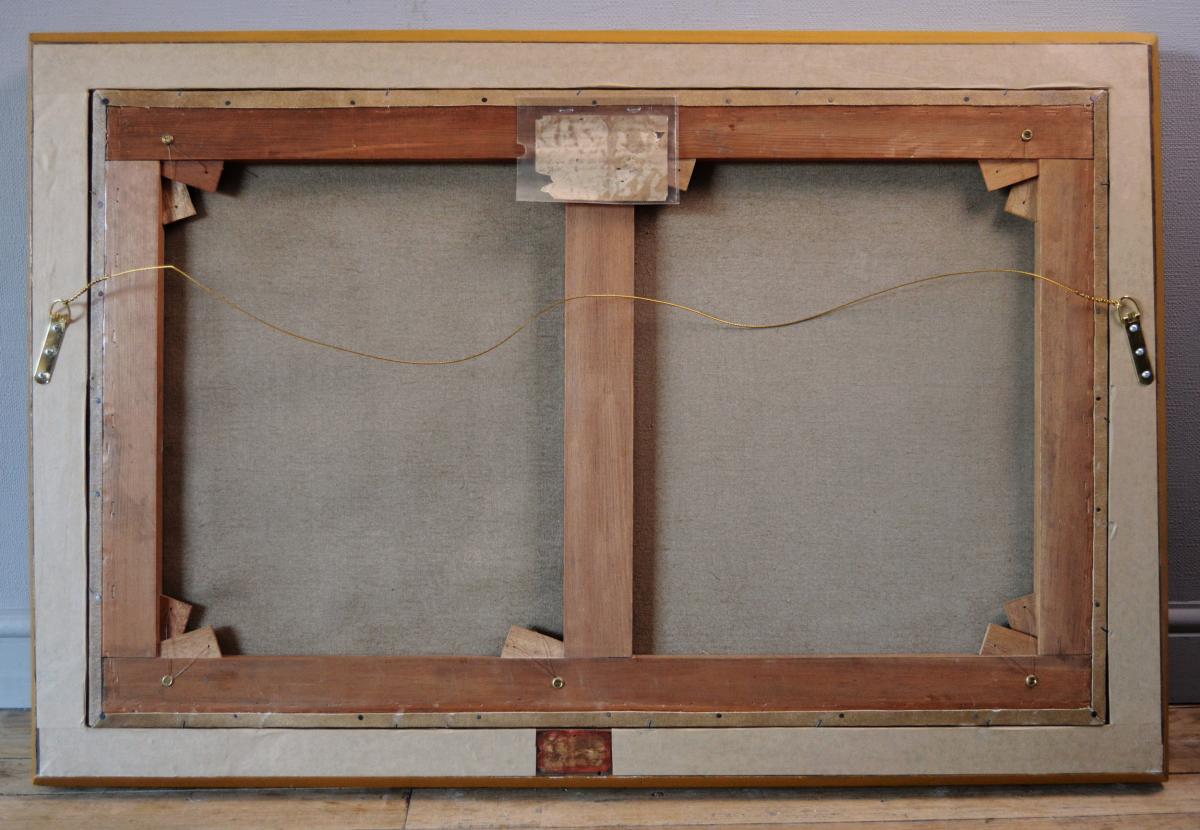 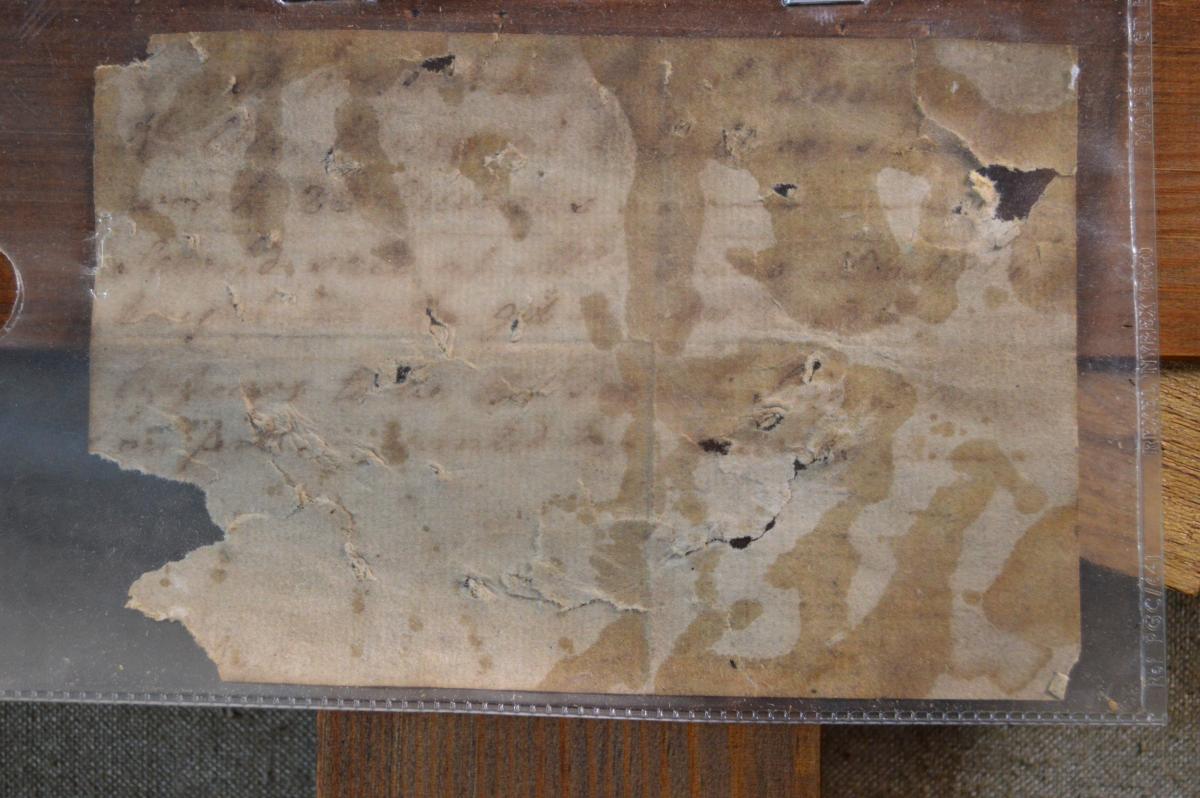 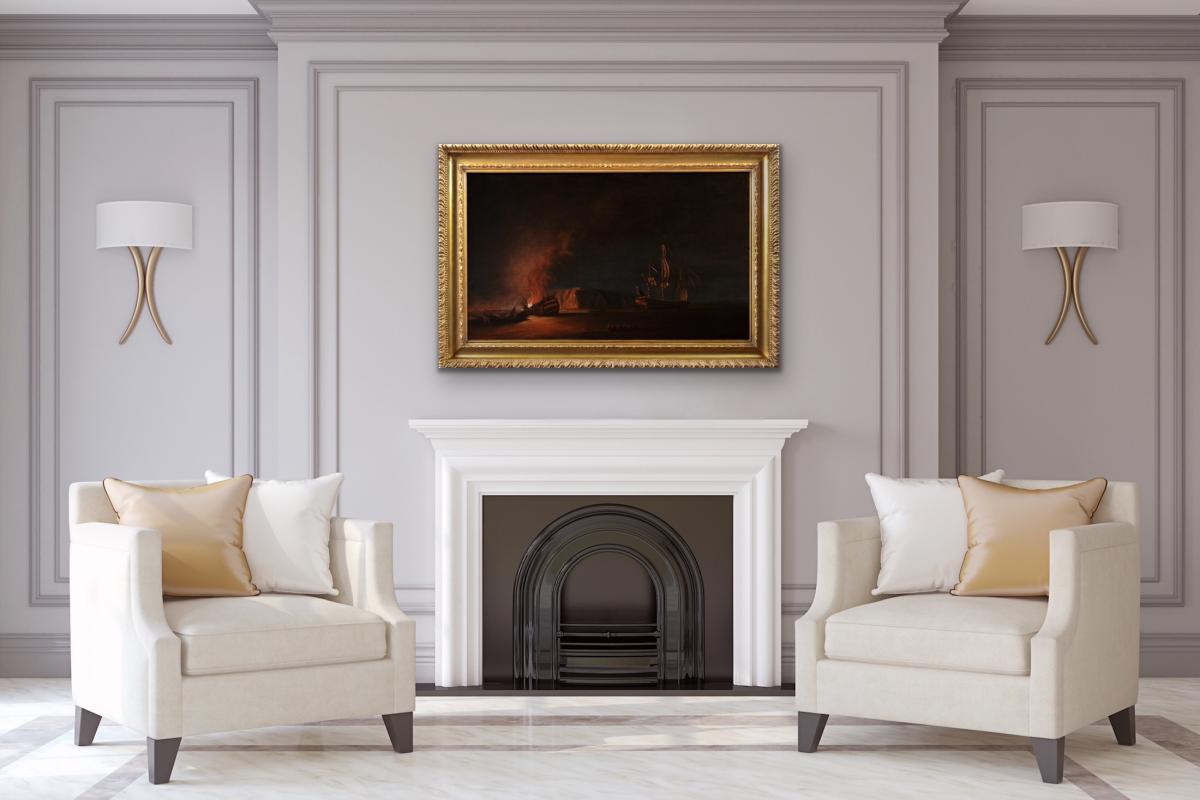 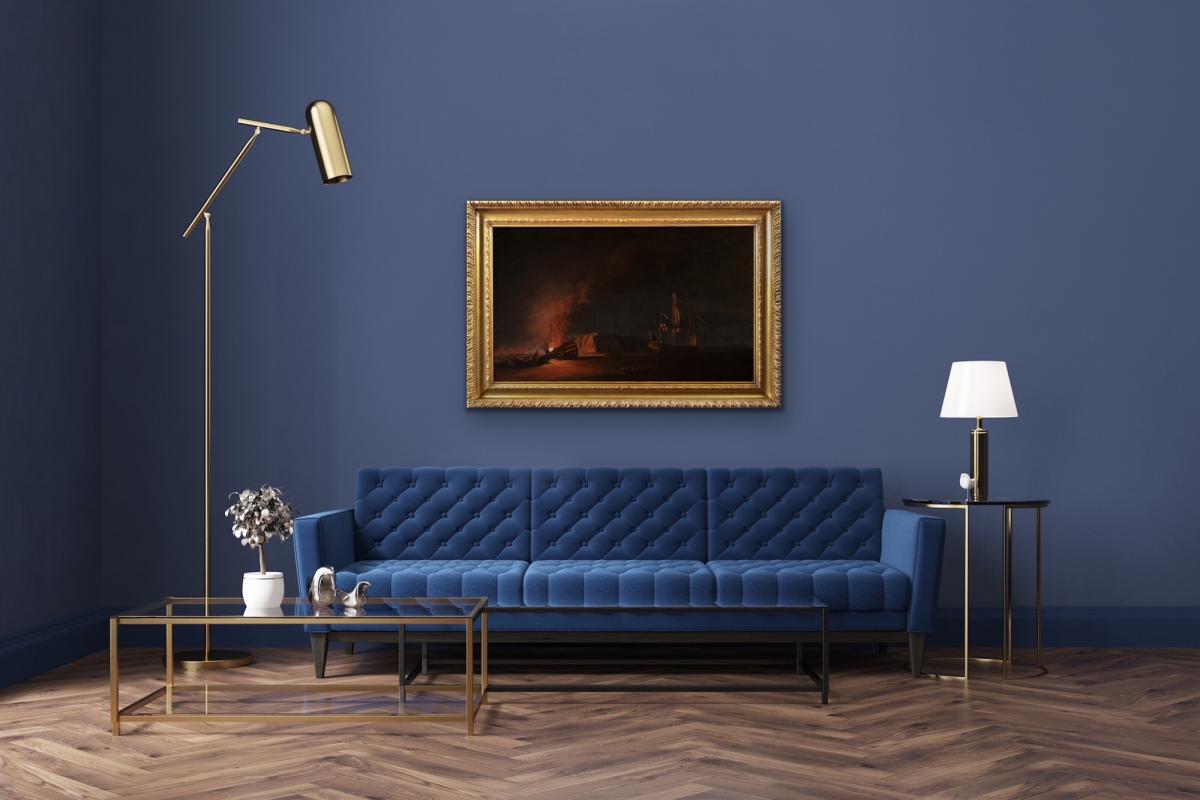 Dominic Serres was born in Auch in Gascony, France. After travelling to Spain he became ship’s captain but was captured by the British navy towards the end of the 1740’s. He eventually settled in London around 1758 and studied art in Northamptonshire and London, where he was tutored by Charles Brooking for a time. He married Mary Caldicutt and three of their children John Thomas Serres (1759-1825), Augusta Charlotte Serres (b1761) and Dominic Michael Serres (1763-1823) also became artists.

His experience at sea inspired his subject matter and the vast majority of his works were marine scenes usually featuring naval ships.  He began working from a studio in London Bridge producing seascapes for his nautical clientele which he sold from his own premises. However, it wasn’t until the height of the Seven Years’ War (1756-1763) between England and France that he achieved wider recognition. Public interest in the British naval successes created an appetite for paintings that depicted these historical events. Serres found himself in great demand and was commissioned to produce a series of paintings to document the war. Later on, he also documented scenes from the American Revolutionary War.

Serres began exhibiting at the Society of Arts Exhibitions in 1761 and was one of the founding members of the Royal Academy which began in 1768, exhibiting there over many years. He also acted as their librarian in his final years. He secured many wealthy patrons throughout his career and in 1780 he became Marine Painter to King George III. He often travelled around England sketching vessels at sea and along the coast gathering topographical material. He lived for many years at Warwick Street, Golden Square, London but also kept a studio at 1 St Georges Row, Oxford Turnpike with his children.  Serres died on 6th November, 1793 and was buried in St Marylebone Old Church.

*This painting is probably one of his earlier works and is thought to show the aftermath of the French fire ship attack on the English fleet off Quebec on 28 June, 1759. Set against the backdrop of the Quebec promontory, the painting shows the British fleet having managed to thwart the attack by bravely towing away the fire ships sent by the French. He enjoyed painting ships at night and painted a number of scenes featuring fire ship attacks and ships alight. Two examples depicting the attacks at Quebec can be seen in the National Maritime Museum.

Presentation: The painting is housed in a period gilt frame which is in excellent condition.
Condition: As with all of our original antique oil paintings, this work is offered in ready to hang gallery condition, having just been professionally cleaned, restored and revarnished. 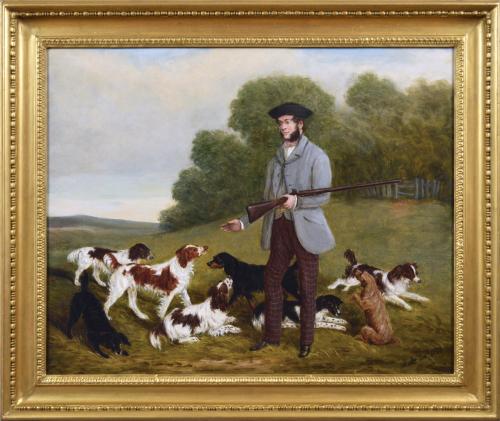 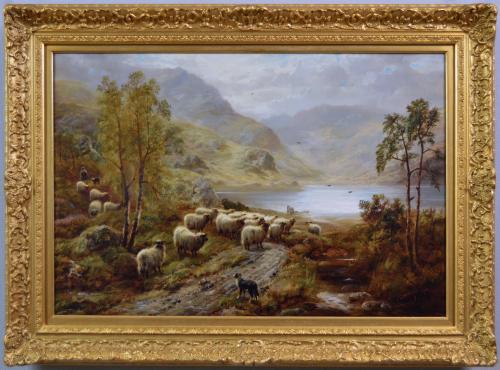 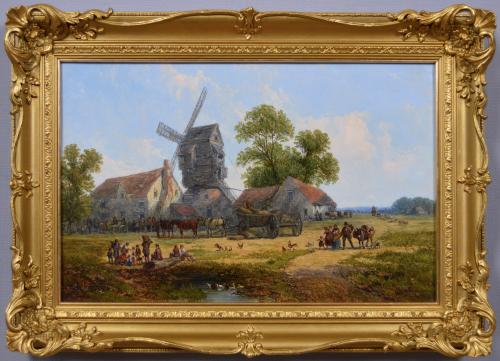