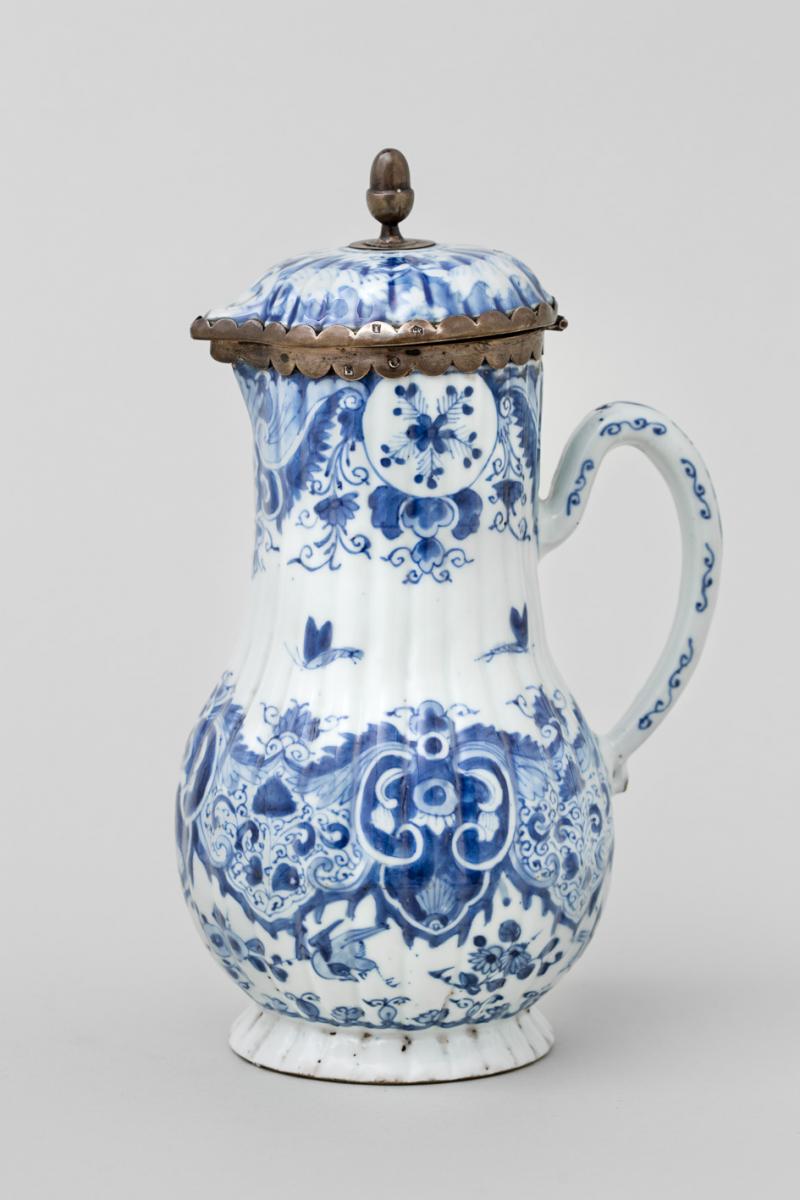 The fluted, blub-shaped body raised on a short splayed foot, with a C-shaped handle, painted in shades of underglaze blue with an elaborate pattern comprised of three registers; the lower register covering the widest part of the body with a pattern of stylised ruyi-heads alternating with cartouches containing intricate scrollwork and flowers, all above four delicately painted birds in flight interspersed with floral sprays; the middle register with four butterflies reserved on a white ground; the upper register with a scrolling floral pattern and two reserved circular panels, each containing individual blooms against a white ground; the handle with a pattern of leafy scrolls; the cover similarly decorated, with a single butterfly at the spout; the later silver mounts complete with hallmark, topped with an acorn shaped finial.

Period: First half of the 18th century

Footnote: There is an almost identical Chinese coffee pot in the collection of Huis van Gijn (number 3757). They attribute theirs Kangxi, 1700-1720.

Our Chinese example is likely to have been based on a Delftware original. There are two strikingly similar Delftware pots in the Hague Municipal Museum. One has polychrome decoration and is attributed 1701-1722 (museum number 0400373), and the other, with blue decoration, is attributed 1722-1757 (museum number 0400534). Both are similar in form and painted design: they have fluted sides and bands of decoration emulating lambrequin swags, elaborate fabric embellishments found over the top of windows or four-poster beds. Such decoration was popular in Delftware from the 1680s and into the 18th century.

Our Chinese example can tell us a lot about the international trade of luxury goods. The hanging fabric motifs are originally of French design, popularised in the Netherlands by Daniël Marot (1661- 1752). In turn, swag motifs became popular on Chinese porcelain in the 18th century. On the Delftware example at The Hague, the pointed shape of the swag decoration echoes the shape of the Chinese ruyi-head motif.  As such, the present jug can be seen as the result of a combination of Chinese, French and Dutch influences.