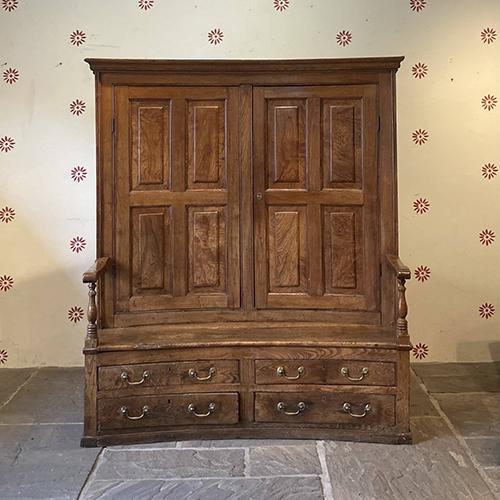 Constructed in multiple forms and sizes, the settle is collective term used to describe a hardwood bench, usually built with arms and a high back, and designed to accommodate three or four sitters.

The form is thought to date from the 12th century with the high back design favoured as a means of protecting the sitter from unwanted chills common in draughty medieval buildings.

Typically, a settle would be situated in the centre of a room, acting as a divider, with the seat facing towards the fire and the back shielding the sitter from the door. Further protection could be offered by the addition of winged ends and even in some instances a wooden canopy.

Elaborately carved examples were a common feature in most manor houses until the early 18th century. More functional, rustic examples remained a staple feature of many farmhouse kitchens well into the 20th century.

A highly versatile item of furniture, many variants of the settle existed, including the settle bed, which featured a hinged seat that could be opened out to create a bed, and the settle table, in which the back of the bench was hinged and could be rotated 90 degrees to form a tabletop.

Perhaps the best known and most ingenious variant is the Bacon Settle, in which the high back of the bench is designed to incorporate storage cupboards. Although termed a bacon settle, these cupboards were not simply for curing bacon and could be used for storing a multitude of foodstuffs, offering safe storage from rodents and other household vermin.

Settles often came with a box seat, providing further storage for clothing or bedding, in fact in rural Ireland it was not uncommon to keep livestock in the kitchen settle, with the box seat adapted as a rudimentary chicken coup.

Click here to view a selection of settles currently available from BADA members.