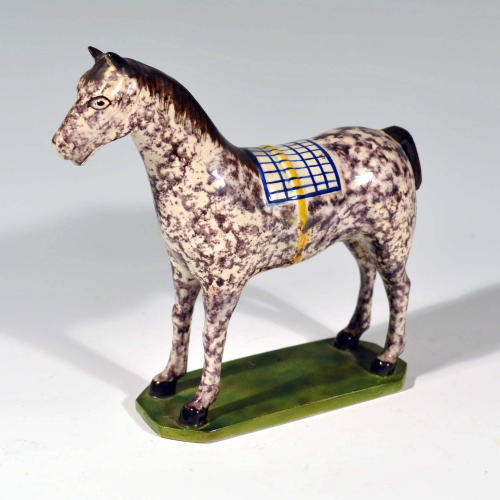 Prattware is the collective term given to a specific style of underglaze coloured earthenware, often relief decorated, produced in the UK from approximately 1780 to 1840.

The light earthenware body of a piece is decorated in a palette of oxide colours comprising, cobalt blue, yellow ochre, manganese, brown, and copper green, which are applied under a pearlware glaze. This palette had been previously used as the basis for polychrome delftware.

The term Prattware is derived from the family of potters F & R Pratt and Company, earthenware manufacturers who were based at the Fenton Potteries in Staffordshire. The factory was founded by brothers Felix and Richard, and it is a widely held belief that Felix was the inventor of the technique that now bears the family name.

However, many factories at the time produced this style of wares, not only in Staffordshire but also in Liverpool, Yorkshire, the Northeast of England and as far afield as Devon, South Wales, and Scotland, making it difficult to define the exact origins of Prattware’s invention.

It is thought that auction houses are responsible for coining the term as F & R Pratt were accustomed to marking their products, making it is easy to attribute some of the earliest examples to their factory.

To view the finest examples of this colourful and highly collectable ceramic style currently available from BADA members click here.