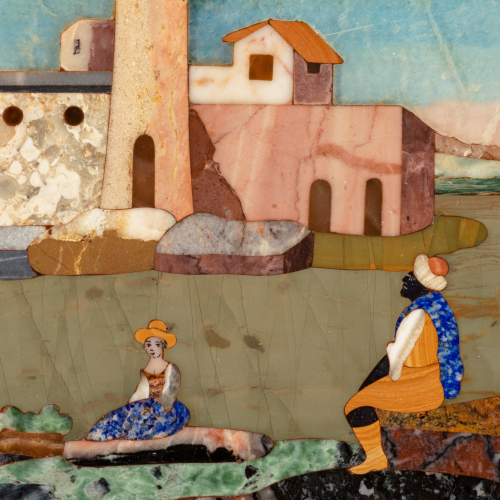 Pietra dura, or pietre dure, is an inlay technique using cut stones to create images. The stones are often highly polished and colourful, and can include marbles, semiprecious and sometimes even precious stones.

The work is loosely assembled and glued together piece by piece, so that the contact between each stone type is an invisible join.

In antique items, stability was achieved by grooving the underside of stones to make them interlock, and then the work was contained carefully within a ‘frame’.

The technique first appeared in Rome during the 16th century, and was especially popular in Florence.

Pietra dura items are generally crafted on green, white or black marble bases. The resulting panel is often completely flat, but there are some examples where the image was made in low relief, such as in furniture pieces.

The technique has been used for items like medallions, cameos, plaques, panels, bowls, jardinieres, founatains and more!

It was popular to copy existing images such as paintings in the form of a pietra dura. Table tops were most prized, as they were so large and required complex structures for stability.

View examples of pietra dura in our members' stock here.