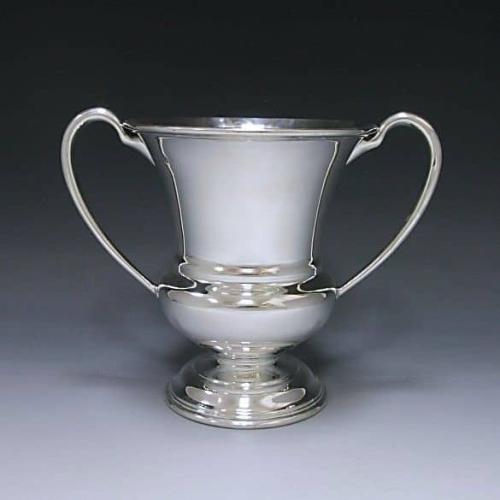 Common to several European cultures, a loving cup is a drinking vessel commonly used at weddings to celebrate the happy couple’s union and to symbolise the pledge they have made to one another. They are also frequently used at livery companies and City of London banquets as a toast to friendship and fraternity.

Loving cups are usually two handled in appearance, although three handled varieties can be found, and are traditionally made from silver, porcelain, or wood. The finest silver loving cups should also have a lid and were often used as sporting trophies, with many fine examples still in use today.

The origin of the loving cup is debatable but a commonly held belief is that the design dates to the demise of English King Edward the Martyr in 978. According to legend Edward was fatally stabbed in the back whilst raising a two handled drinking cup to his lips, thereby incapable of defending himself.

It is said that this led to the ceremony of the loving cup which is still observed at many of London’s livery companies. When the cup is passed around the table, the guests to each side of the drinker rise together, one bows to the drinker and removes the cup lid while the other stands back-to-back with the drinker, effectively guarding him on all sides.

It is certainly a fine tradition, however, our main source for knowledge of Edwards’s life is the Anglo-Saxon Chronicle which suggests that the king was murdered on horseback as he arrived at the gates of Corfe Castle to visit his half-brother. So there seems little evidence to support the Loving Cup theory.

The Russian version of the loving cup is known as a Bratina or brotherhood cup and was traditionally made from wood or copper and usually bowl shaped with no handles or lid. They were used for sharing wine or rye beer at weddings, festivals, and feasts and fine examples were often decorated with precious stones and engraved with a Russian proverb or motto.

The earliest carved examples of the French ‘coupe de mariage’ date as far back as the 13th century. They were initially produced in the form of chalices and largely reserved for the monarchy and nobility. Usually made from silver, French wedding cups are generally broader than their English counterparts. They are decorated in a very simple fashion with the initials of the bride and the wedding date engraved to the foot, along with hearts, laurel leaves or beading.

Perhaps the most unusual loving cups were the porcelain cups donated by Sir Francis Joseph, Chairman of Stoke City FC to each of the members of the English First Division, The Football League, Scottish FA and Glasgow Rangers to mark the coronation of King George VI in 1937.

The idea was for the directors of each club to toast the King, football, and friendship prior to their first home game of each new year and the original mould was broken so that the cups could never be replaced. Seven of the clubs continue the tradition annually, including Rangers who shared their loving cup with the directors of Stirling Albion recently prior to their Scottish Cup tie in January.

See all Loving Cups from our members.

See all Quaich from our members.