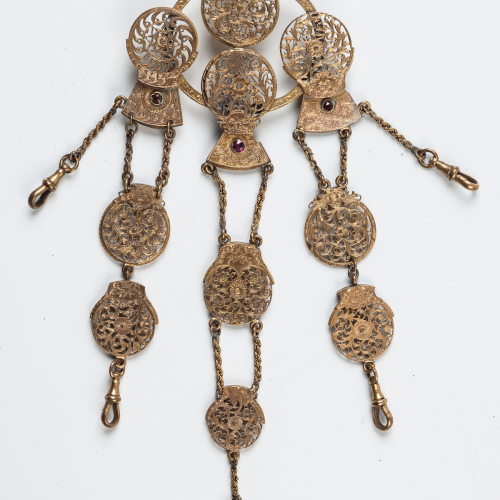 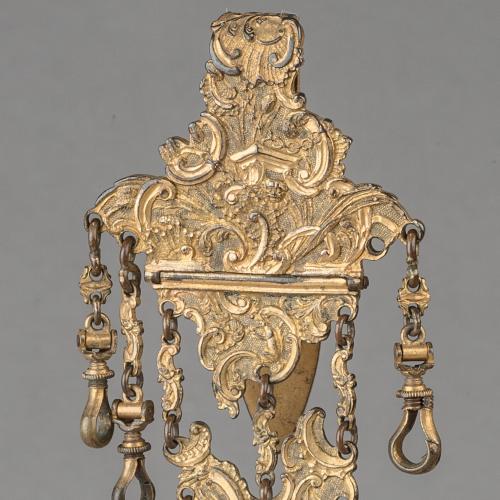 A chatelaine is a decorative belt hook or clasp worn at the waist, with several chains suspended from it. Each chain is usually mounted with useful household items such as scissors, thimbles, keys, watches and household seals.

The remnants of chatelaines and their accompanying bags have been found in the graves of women of the seventh and eighth centuries in the UK. Often found with these artefacts were rings, beads, buckles and knives.

Chatelaine bags refer to the bags that would be suspended from a waistband by cord or chain, popular from the 1860s through to the end of the 19th century.

Chatelaines were worn by housekeepers in the 16th through to the 19th centuries. In the 16th century Dutch Republic, they were often used as watch chains for the wealthiest. Similar jewellery has also been worn by Anglo-Saxon women, but their function is uncertain.

The name chatelaine derives from the French ‘châtelaine’ which meant the Mistress of the Chateau. She would have had a belt for her keys, which the current meaning of chatelaine comes from.

The chatelaine was used as a woman’s keychain in the 19th century to show the status of a woman in a household. The woman with the keys to desks, chests of drawers, pantries, storage containers and other locked cabinets held a lot of power. As such, she was the one to direct servants, housemaids, cooks, and deliverymen and would open or lock the access to any valuables in the house. They would have possessed total authority over access to everything in the building. Usually, this person would be the most senior woman of the house. When a woman married and moved into her father-in-law’s house, her husband’s mother would usually hold onto the keys. However, if the mother became a widow, the keys and their responsibilities would often be passed on to the oldest son’s wife. Younger women and daughters in the house would often want the appearance of this responsibility and would wear decorative chatelaines with a variety of small objects in place of the keys, such as bright and glittering objects that could be used to start conversation. In the absence of a woman of the house, the keys were often passed to a hired housekeeper.

See all chatelaines in our members' stock here.