A conversation with John Howard 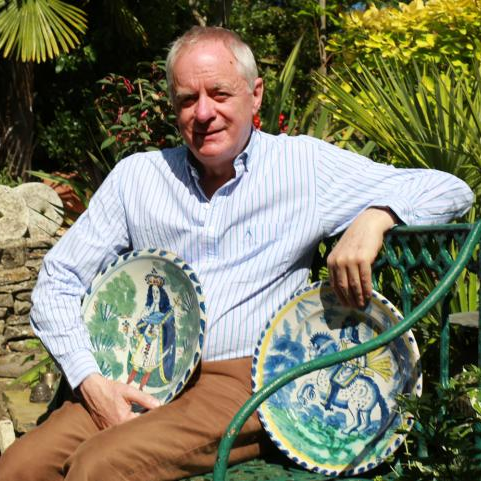 John is an internationally recognized authority on 18th and 19th century British pottery, and a previous Chairman of CADA. He is always looking for pieces with that “extra special something” and strives to select the best and often the rarest, with a discerning eye based on 40 years' knowledge and experience. John enjoys collaborating with customers on their collections and working with interior decorators and institutions such as the British Museum and the Metropolitan Museum of Art in New York.

Can you tell us a bit about yourself and your antique specialism?

We opened a shop (actually a tin shed opposite the cemetery) in Warrington in 1976. We still had proper jobs so opened only in the evenings from 6 pm till 8 pm and all day at the weekend. We later opened a general antique shop in Aberystwyth specializing in British Pottery, country furniture, and jewellery, and moved to Woodstock in 2001. I concentrated on the specialized area of British Pottery and started exhibiting at antique fairs such as Olympia, the New York Ceramic Fair, LAPADA, and of course, the BADA events.

What was the first antique you bought for yourself personally and why?

My grandparents worked a smallholding in Cardiganshire. As a young child, I was fascinated by the Staffordshire glass-eyed spaniels, the gaudy Welsh and copper luster jugs, and blue and white plates on their dresser. When I left school at 15, my first week's wages were £2.17.6, and I spent the lot at the pawnbrokers in Mersey Street in Warrington on a copper luster jug (missing the spout) similar to one on the old Welsh dresser in Wales.

What item of your stock, old or current, has the strangest back story?

One day, at the shop in Aberystwyth, a local lady said she wanted to sell her oak Welsh dresser as her husband thought a witch lived in it! I went down to look at the dresser and made an offer to the couple, who were more than happy to accept - the husband warned me that the piece was cursed and that it would only bring bad luck.

On the way out to lift it onto the roof rack of the Volvo Estate, we managed to smash a lovely vase in the hall. As I was loading, a couple who lived five doors away asked me to call in while I was in the area to look at a table they were thinking of selling. I jumped in the car and pulled up at their door, only to see the dresser base (which I had forgotten to rope up) slide off the roof rack and land on top of a brand new Renault.

I was pleased when the dresser sold the following week with marginal profit to an obnoxious trade dealer from Leominster.

If money were no object what one work of art would you buy?

I would love to acquire a Ralph Toft slipware charger

What is the best piece of advice you have ever been given?

Learn a lot about one thing and a bit of everything else.

If you were starting a collection today, what would you invest in?

The monetary investment would not feature. My advice would be to acquire pieces that enhance and bring joy to your life and to those around you.

What's your favourite piece of current stock for sale?

A Polito's Menagerie on a table base made at the Staffordshire Potteries circa 1825.

Which is your favourite museum, gallery or historic house and why?

I have never been keen on museums as they have nothing for sale, but the V&A houses a stunning collection of British Pottery.

Who would be your dream dinner party guests, dead or alive?

George Harrison, Jackson Browne, Hank Marvin, Carol King, James Taylor, Neil Young and my wife. Though in general dinner parties are not for me, thank you. I much prefer a one-to-one for dinner.

What is your favourite album?

Jackson Brown and his masterpiece album Late for the Sky.

If the house was on fire, which three things would you save?

My guitars, my CD collection and probably one of the twins.

Which actor would play you in the movie of your life?