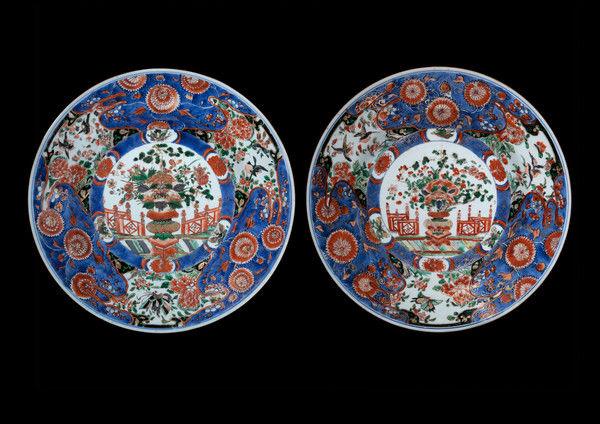 Each painted in enamels with a central basket of flowers within a candle fence terrace, the cavetto decorated with three panels containing birds in flight amongst luxuriant peony blooms, all reserved against an elaborate imari border of bold chrysanthemums against an under glaze blue ground, the underside decorated with prunus branches.

Literature
It is rare to find a pair of chargers of this design, which was inspired by Japanese export ceramics of the 17th century. This was in turn copied by some of the European factories, including Belvedere Warsaw Faience, most notably in a later service for Sultan Abdul Hamid I, which has consequently resulted in this design being known as the ‘Warsaw’ pattern. Christiaan J. A. Jörg in “Famille-Verte Chinese Porcelains in Green Enamels” also mentions that this service was known as the ‘Stanislaw’ pattern due to the fact that pieces were also made for the Polish King, Stanislaw II. This pattern can be found amongst the princely collections of Europe, including Augustus The Strong, King of Poland and Elector of Saxony, housed in the Zwinger, Dresden.

A smaller dish with the same pattern is depicted in the 1919 catalogue “Porzellane und Waffen aus den Kgl. Sächsischen Sammlungen Dresden” lot 289, from the collection of Augustus the Strong (1670-1733) Elector of Saxony and King of Poland.