ONE OF ENGLANDS FINEST. THE MAGNIFICENT, RARE AND IMPORTANT RUFFORD ABBEY OAK REFECTORY TABLE. CIRCA 1660. 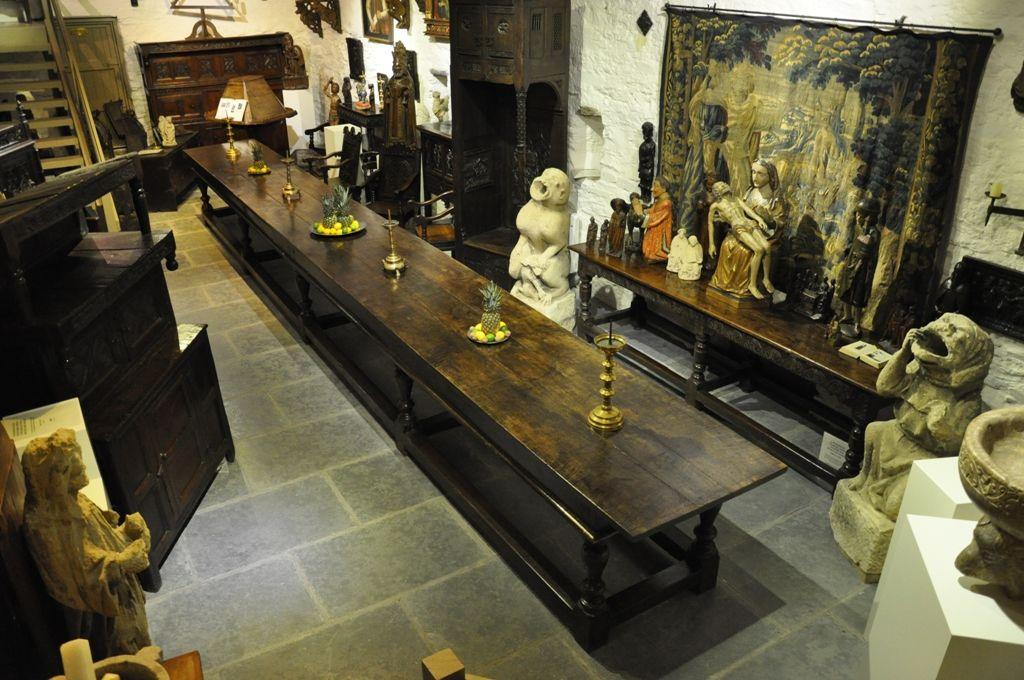 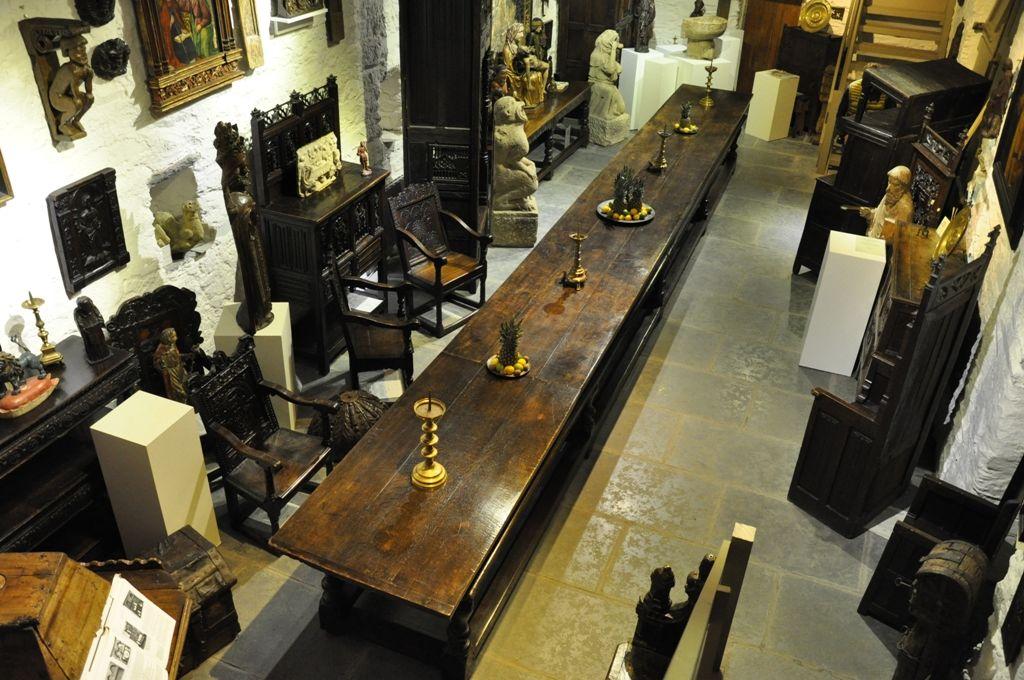 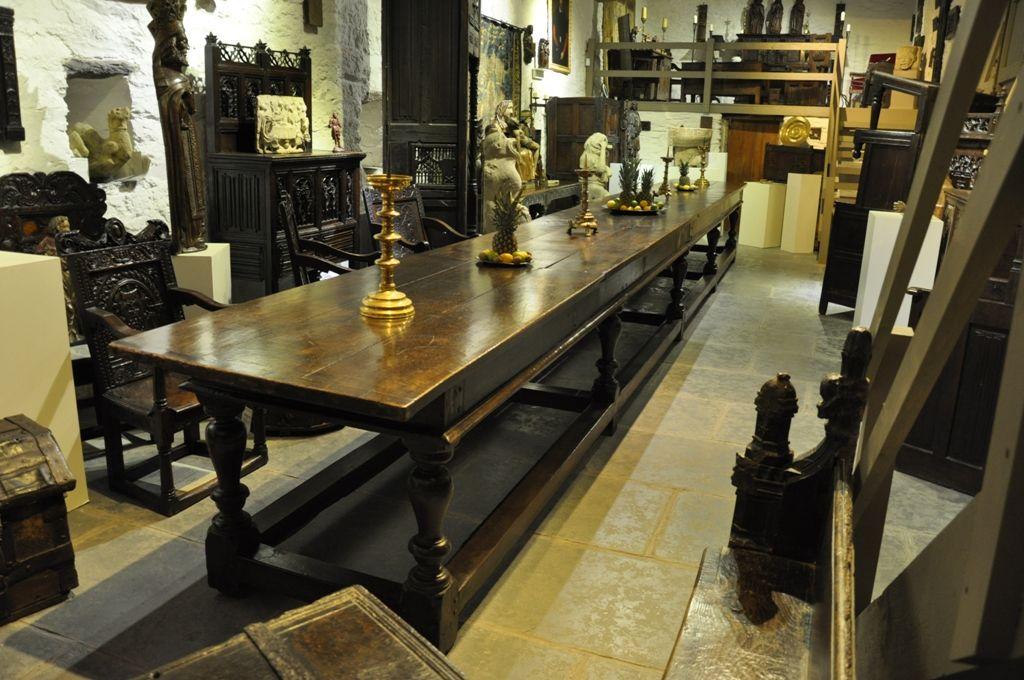 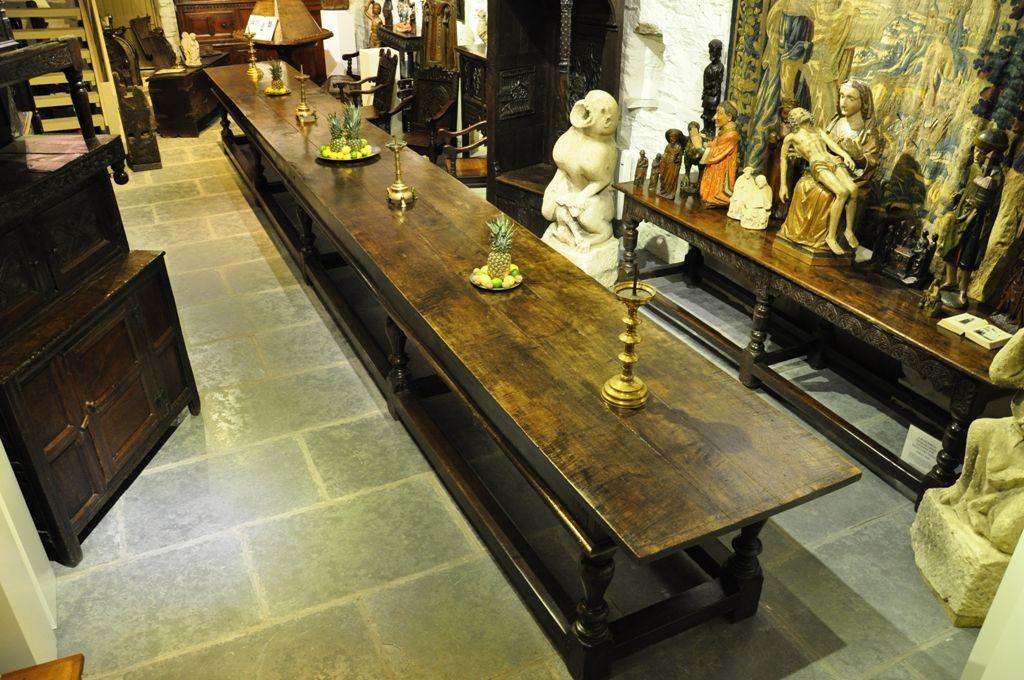 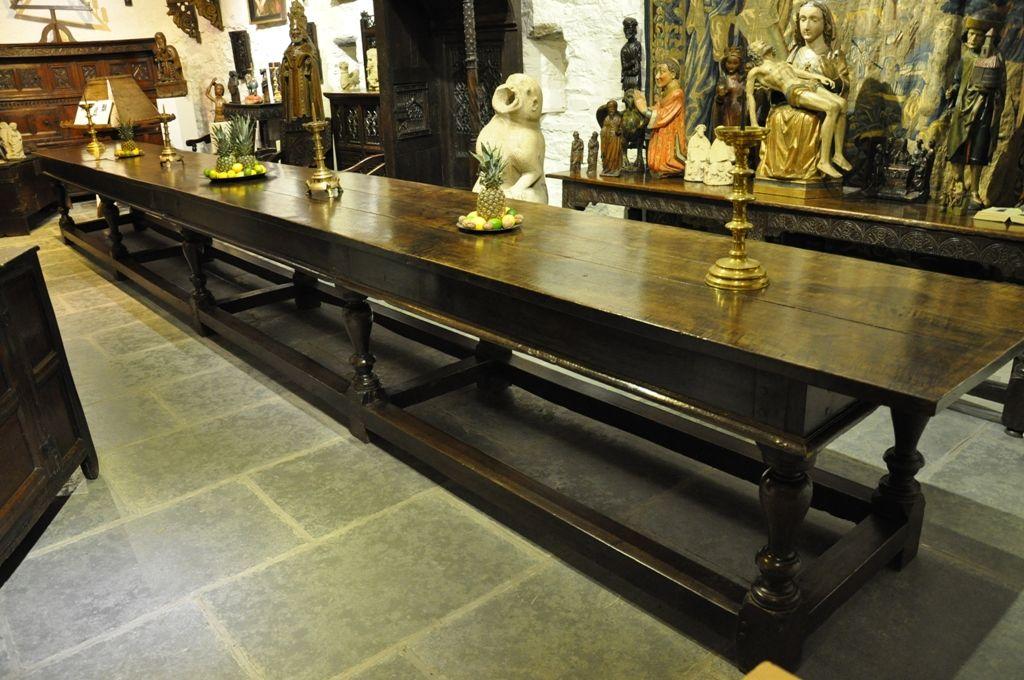 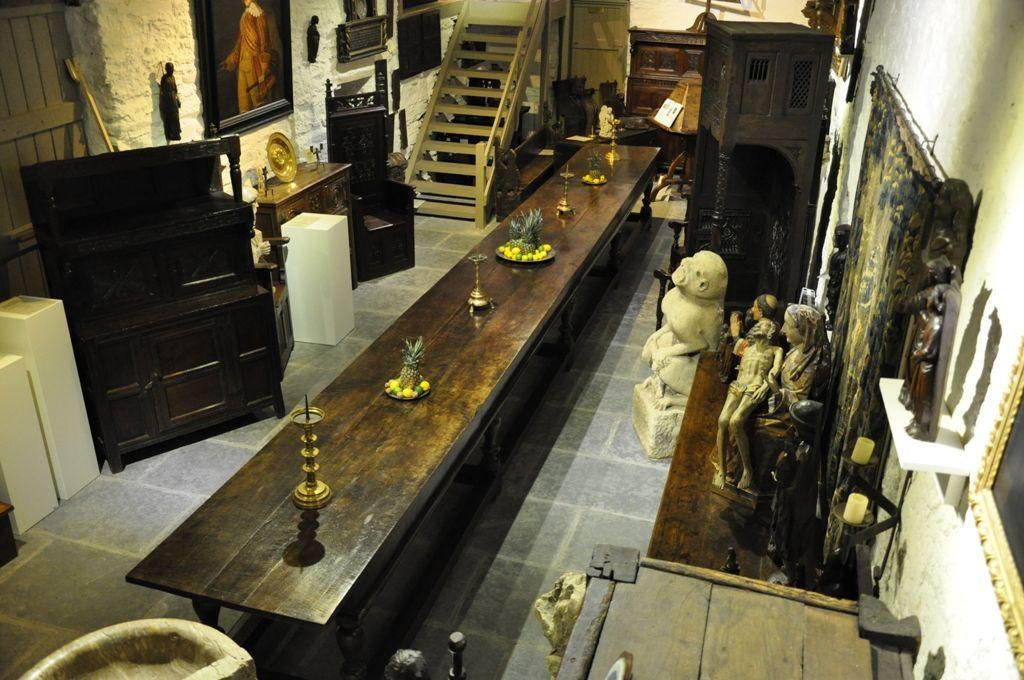 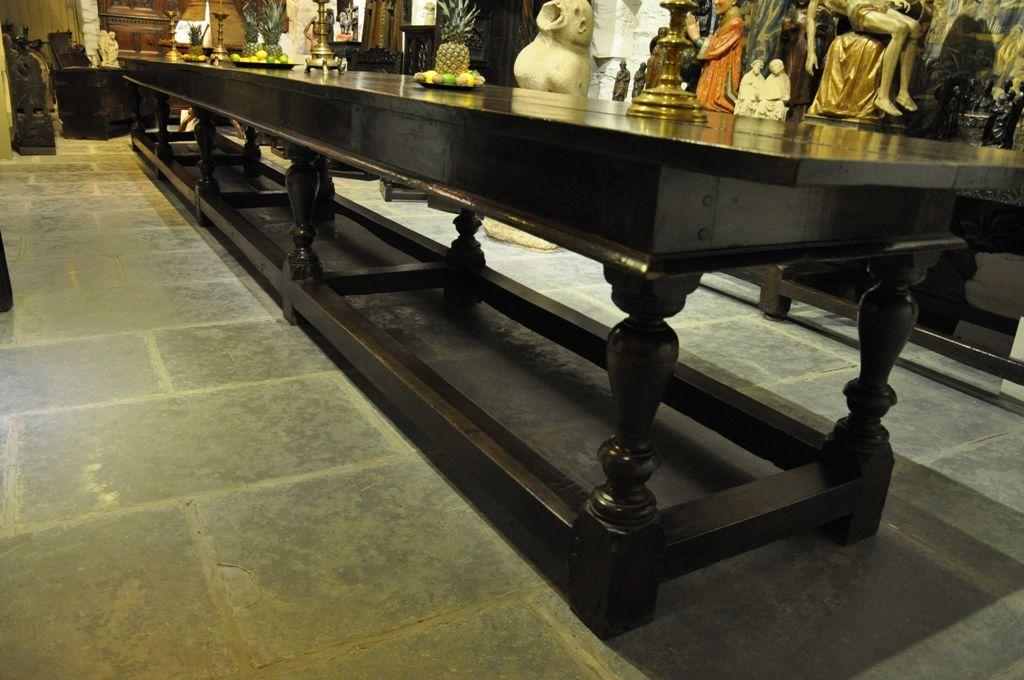 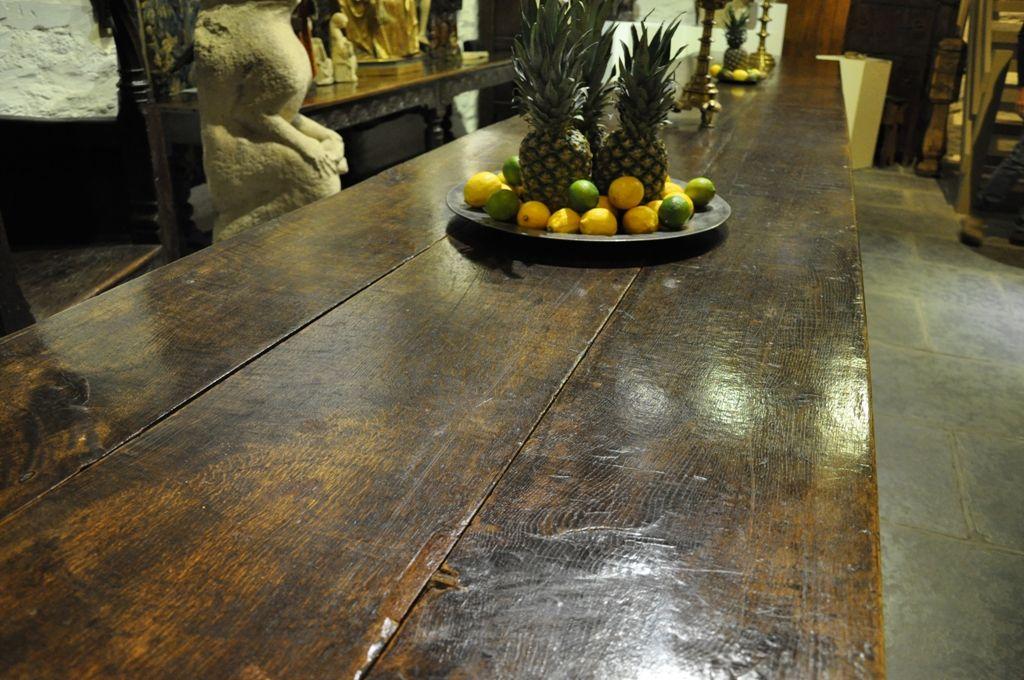 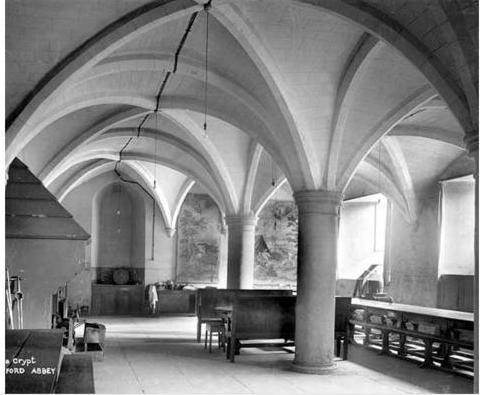 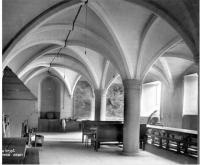 THIS MAGNIFICENT AND IMPORTANT ENGLISH REFECTORY TABLE STANDS AT 27 FEET 6" IN LENGTH X 34" WIDE X 35" HIGH. MADE FROM ENGLISH OAK MOST PROBABLY SOURCED IN THE LOCAL SHERWOOD FOREST. IT HAS TEN BEAUTIFULLY TURNED BALUSTER LEGS UNITED BY STRETCHERS. THE TOP CONSISTS OF THREE LARGE ALMOST 2" THICK PLANKS IN TWO SECTIONS.THIS MONUMENTAL TABLE WAS INGENIOUSLY MADE SO THAT THE BASE CAN BE DISMANTLED INTO TWO PIECES BY THE SIMPLE PROCEDURE OF REMOVING EIGHT PEGS FOR TRANSPORTATION.

THE 12TH CENTURY CISTERCIAN ABBEY SITS IN THE HEART OF SHERWOOD FOREST, NOTTINGHAMSHIRE.

RUFFORD ABBEY- Rufford Abbey was founded in 1146 by Gilbert de Gaunt, Earl of Lincoln, as the Cistercian abbey of St Mary the Virgin. It was suppressed in 1536. The whole estate was quickly acquired by George Talbot, 4th Earl of Shrewsbury. The conversion of the west range of monastic buildings into a house (1560–90) was undertaken by the sixth earl, who was the fourth and final husband of the indomitable Bess of Hardwick, from whom he was then bitterly estranged. In 1610, a new projecting wing was added to the northern end of this range. The estate was inherited in 1626 by Mary Talbot, sister of the 7th and 8h Earls of Shrewsbury, and it passed to her husband, George Savile. In 1679, the Savile family constructed a new north wing on the site of the abbey church, containing reception rooms and a long gallery. They also built the large stable block to the right of the house. The surviving roofed southern service wing (currently used as offices) was also added by the Saviles in the 17th century. In 1938, the 3rd Baron Savile inherited the Rufford estate as a minor, but his trustees split it into lots and sold it off.

STOCK NO 1820
Enquire via Email THE KENDAL / MOORE ARMORIAL PANELS. DEVON. CIRCA 1600-1620.
Period Oak Antiques Ltd
View all from this dealer