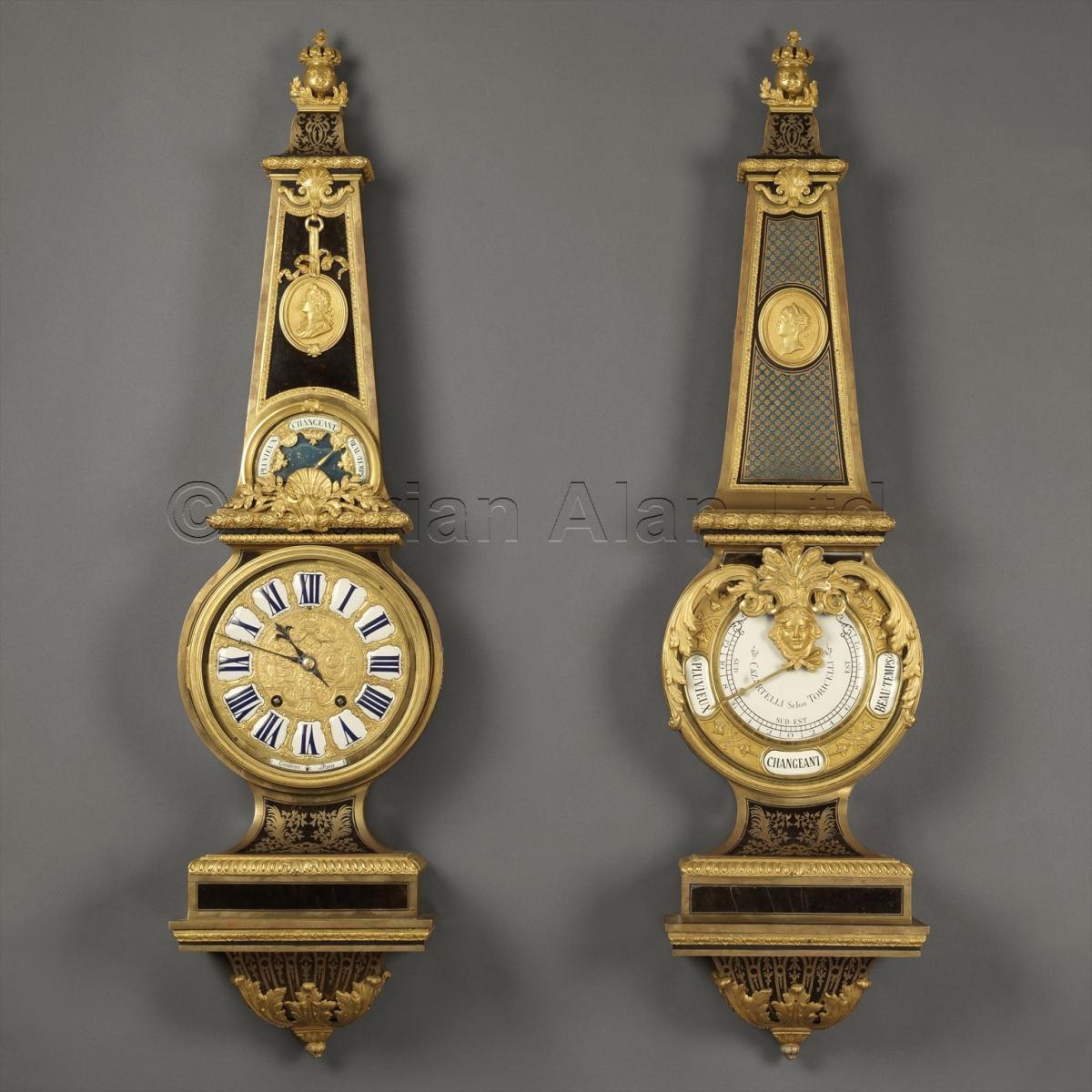 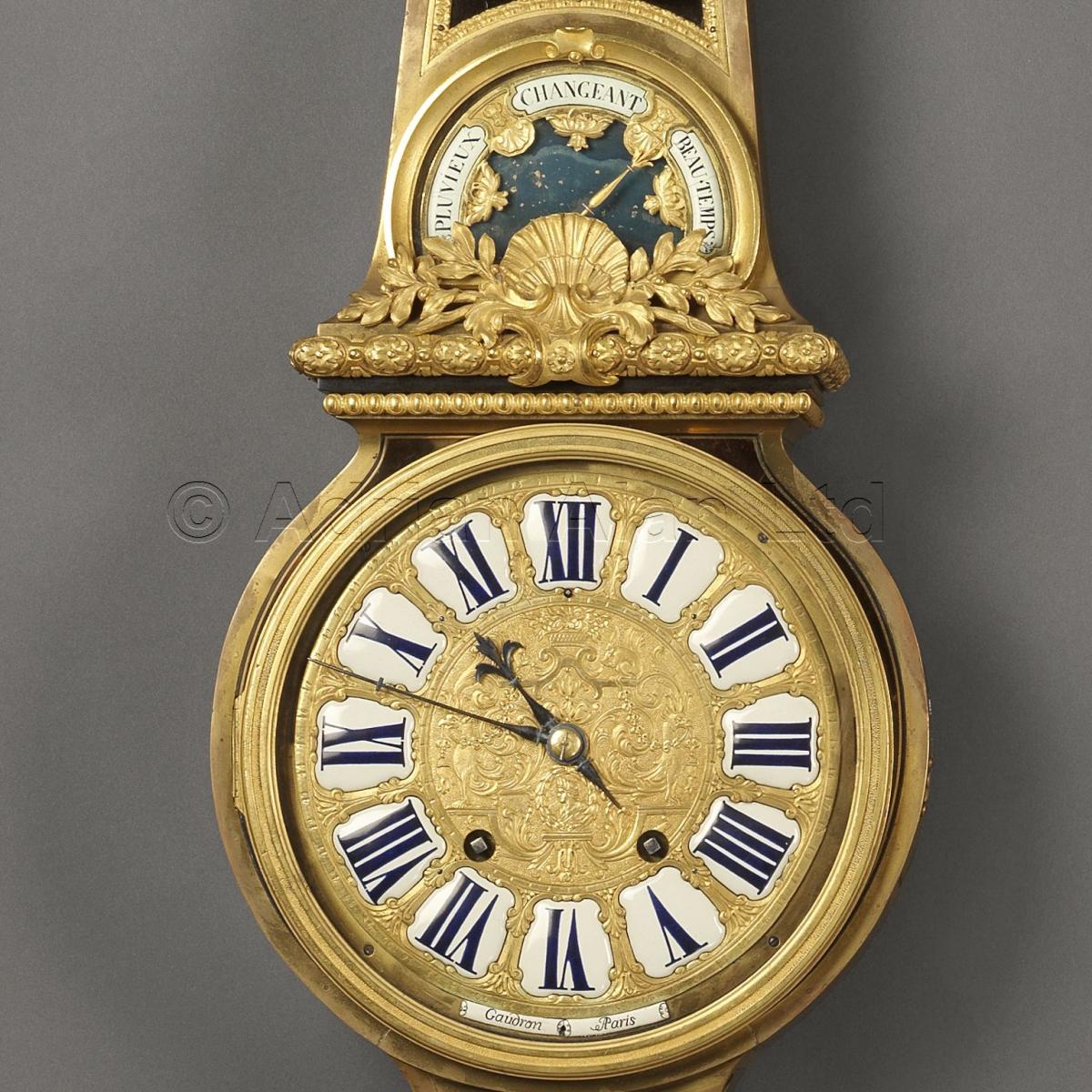 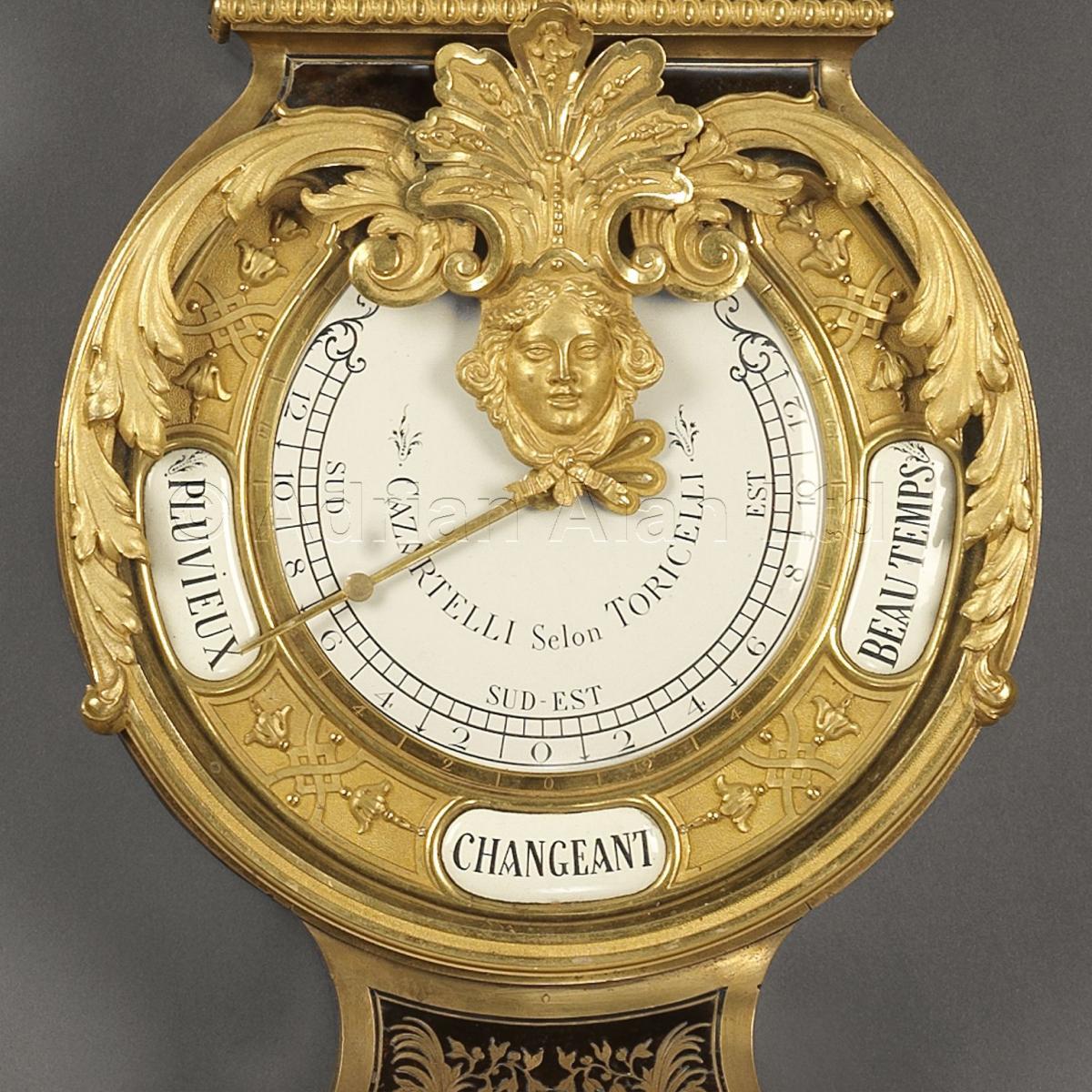 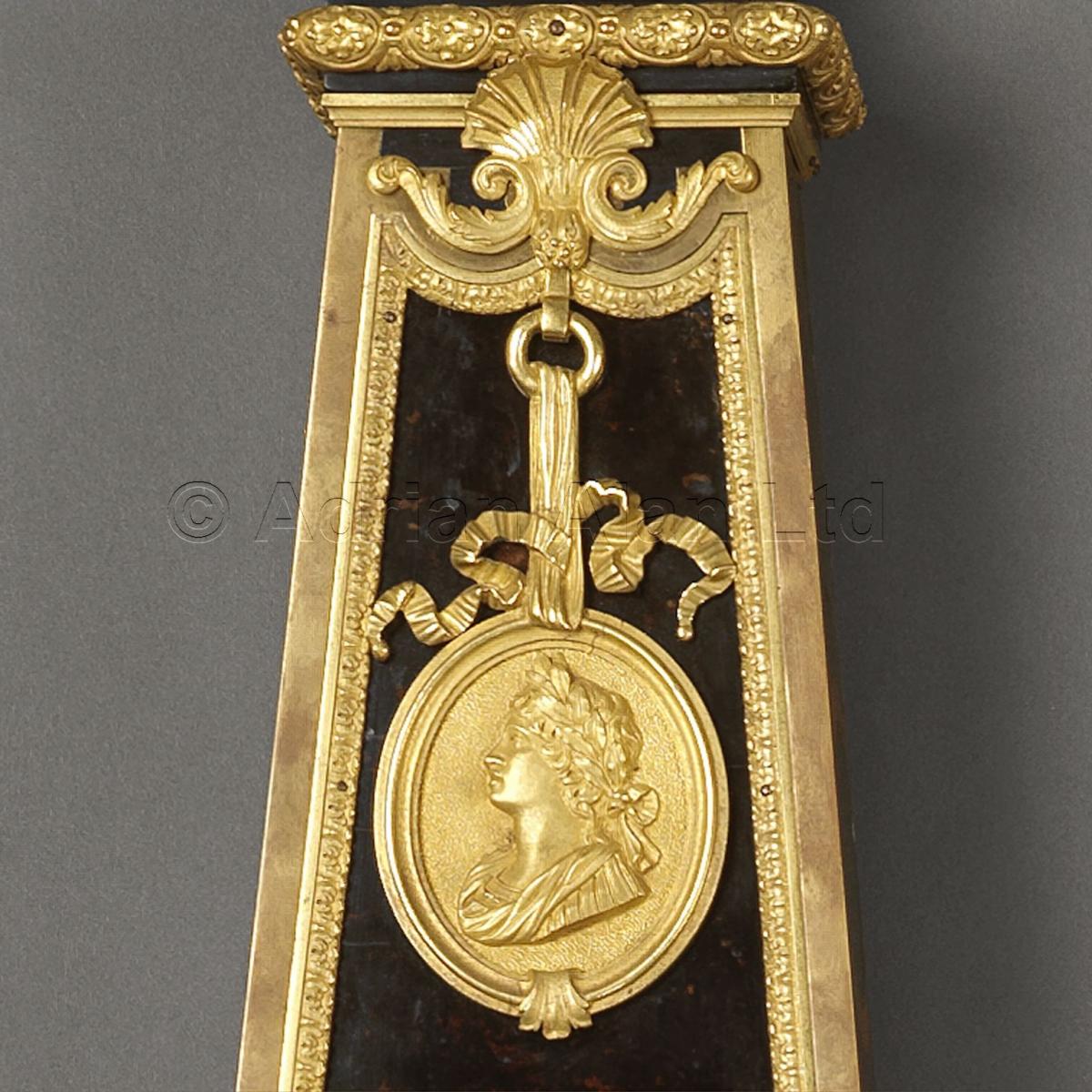 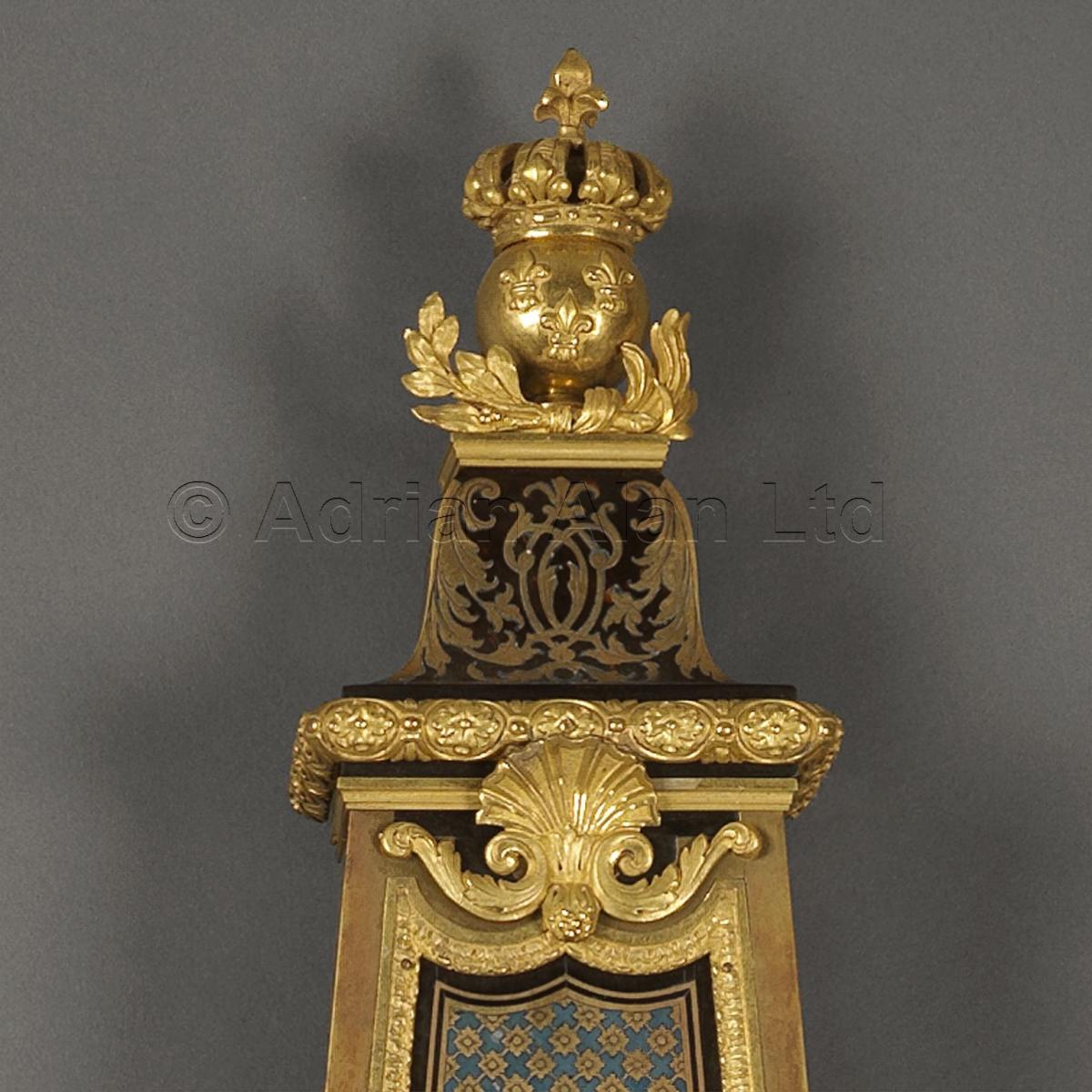 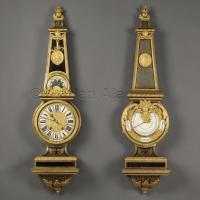 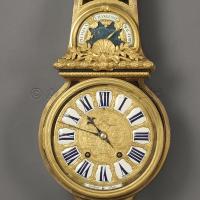 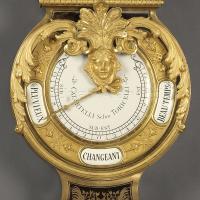 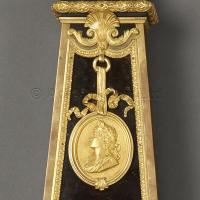 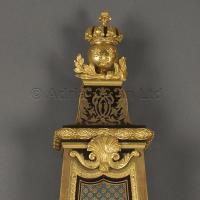 Each with a plaque bearing the signature 'Gaudron a Paris', serial no. '1854' and the barometer further signed 'Cazartelli selon Teoricelli'.

The model for this fine set almost definitely comes from the atelier of André-Charles Boulle, and after the work of Jean Berain and Gilles--Marie Oppenordt. In 1775, five similar examples were documented. Of these, one is now in the Victoria and Albert Museum collection in London (Reference O224261), and another is in the musée des Arts et Metiers in Paris (Reference  05611-0000).

André-Charles Boulle (d.1732), appointed Ebéniste, Ciseleur, Doreur et Sculpteur du Roi in 1672, is among the greatest ébénistes of all time. His fame was such that his name has become synonymous with a whole generic furniture type. In the first decades of the eighteenth century, while still exploiting the common practice of contrasting black ebony against the gold of gilded bronze and brass, silver-toned pewter and often red-coloured tortoiseshell in marquetry, Boulle introduced light, playful designs enlivened with small-scale, lacy designs of playful singeries, garlands of flowers and airy architectural fantasies. First popularised as a technique in his work for the French Court during the reign of Louis XIV, the style has since been associated with the most opulent and expensive designs.

Boulle style furniture held its popularity and prestige throughout the eighteenth century and into the nineteenth century.  The Rothschilds, the Marquess of Hertford and Henry Clay Frick were amongst a number of wealthy individuals who commissioned Boulle inspired pieces from important makers, such as Sormani, Zwiener, Beurdeley and Blake.  Many of these nineteenth century pieces took their places comfortably side by side with their predecessors from the seventeenth and eighteenth centuries in great houses such as Mentmore.