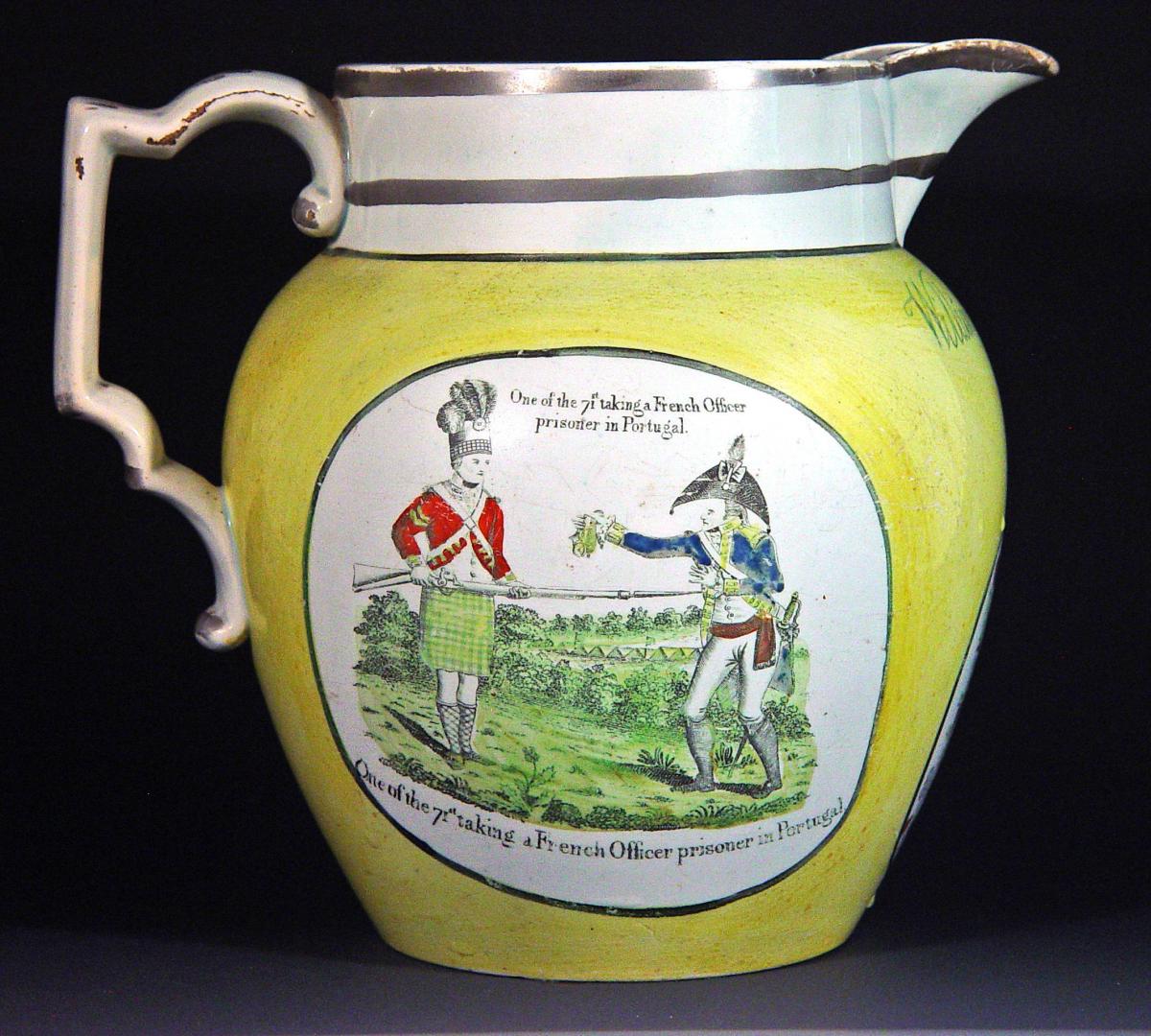 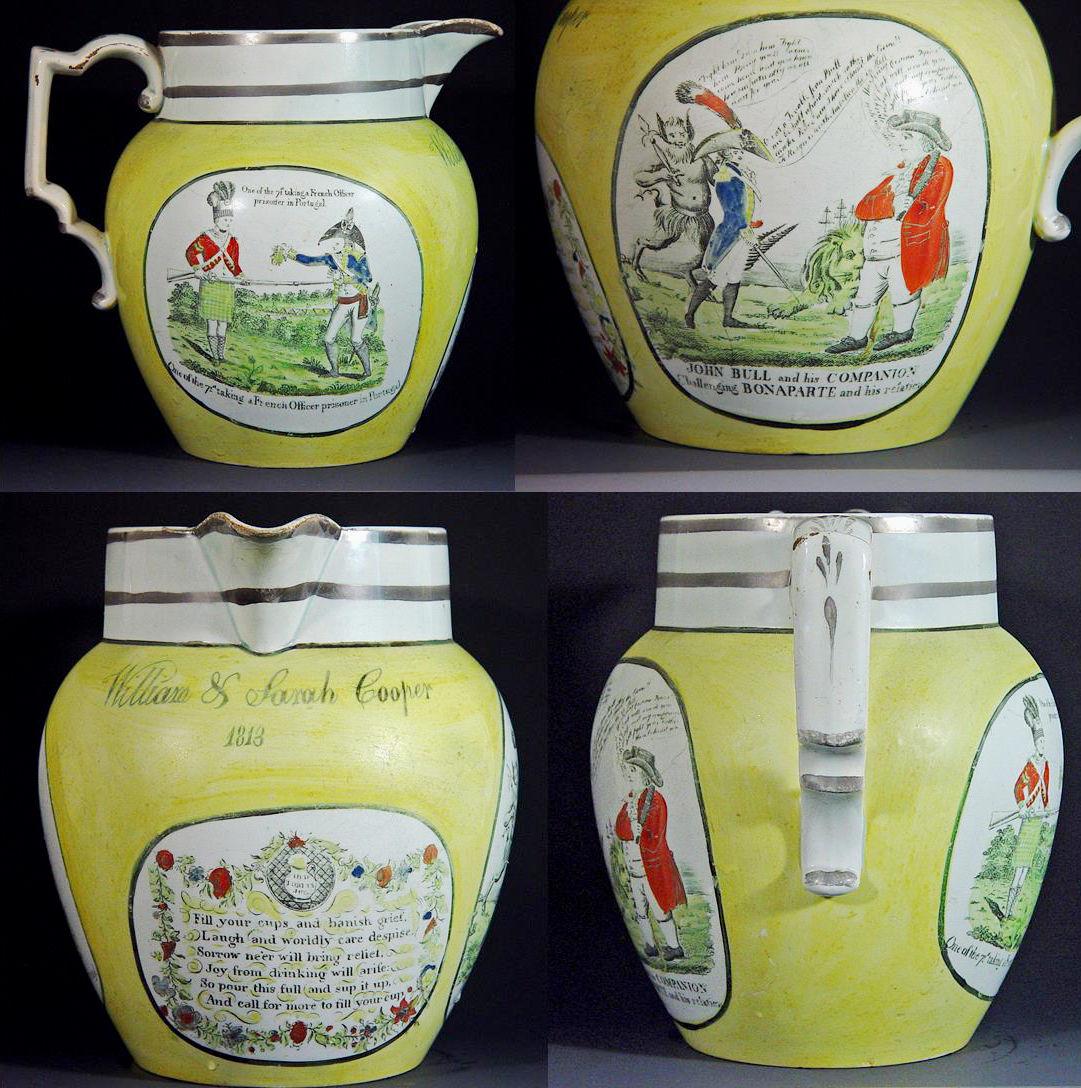 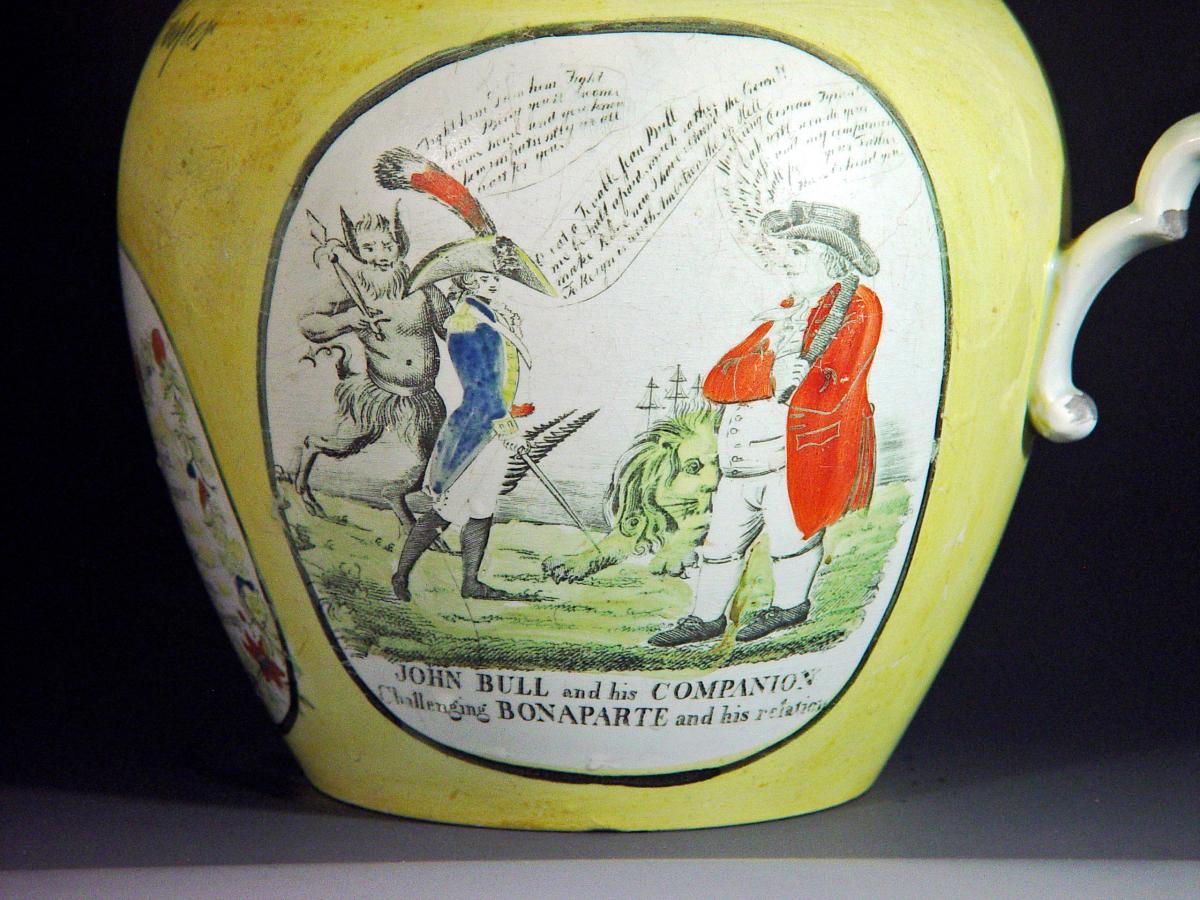 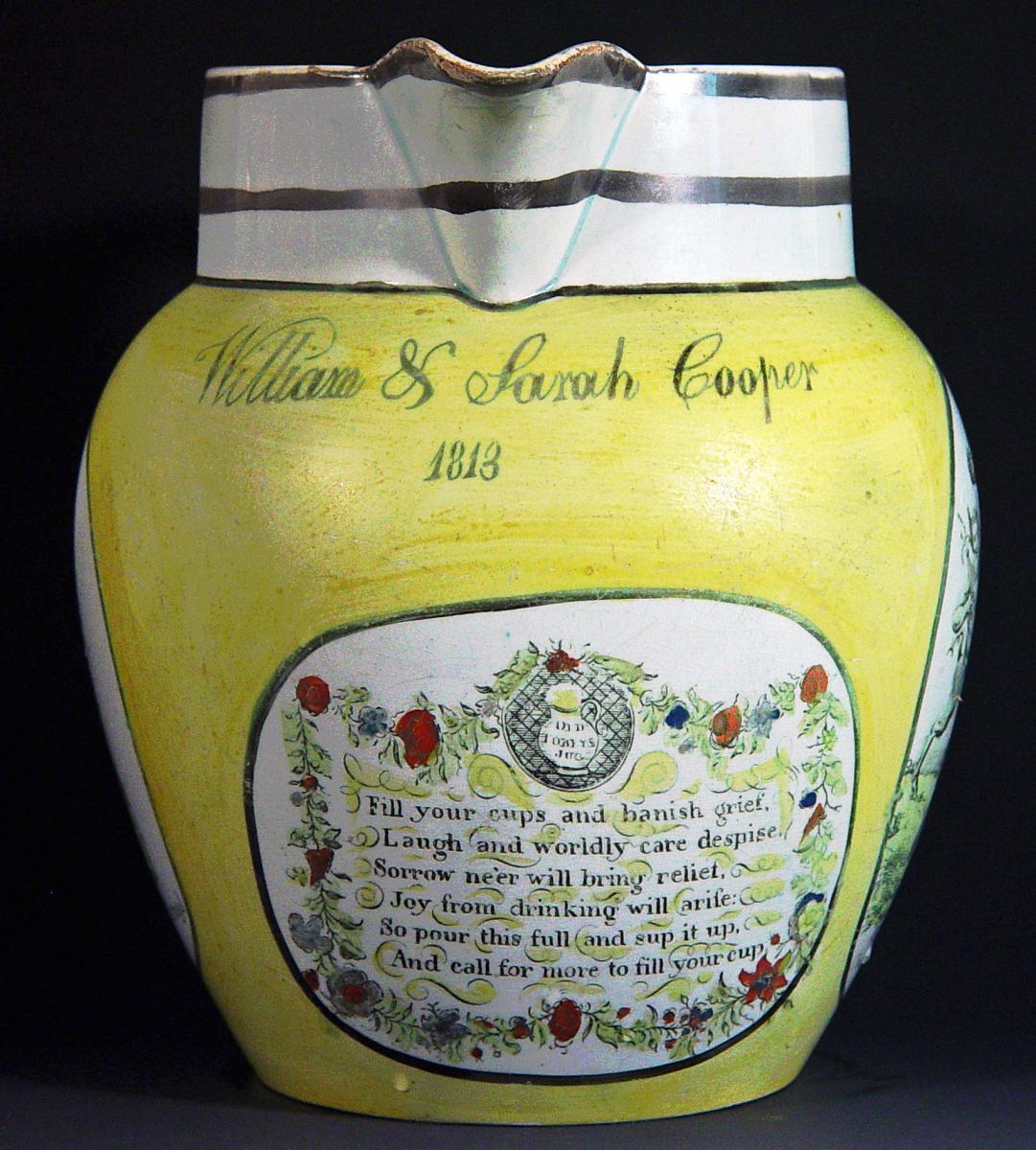 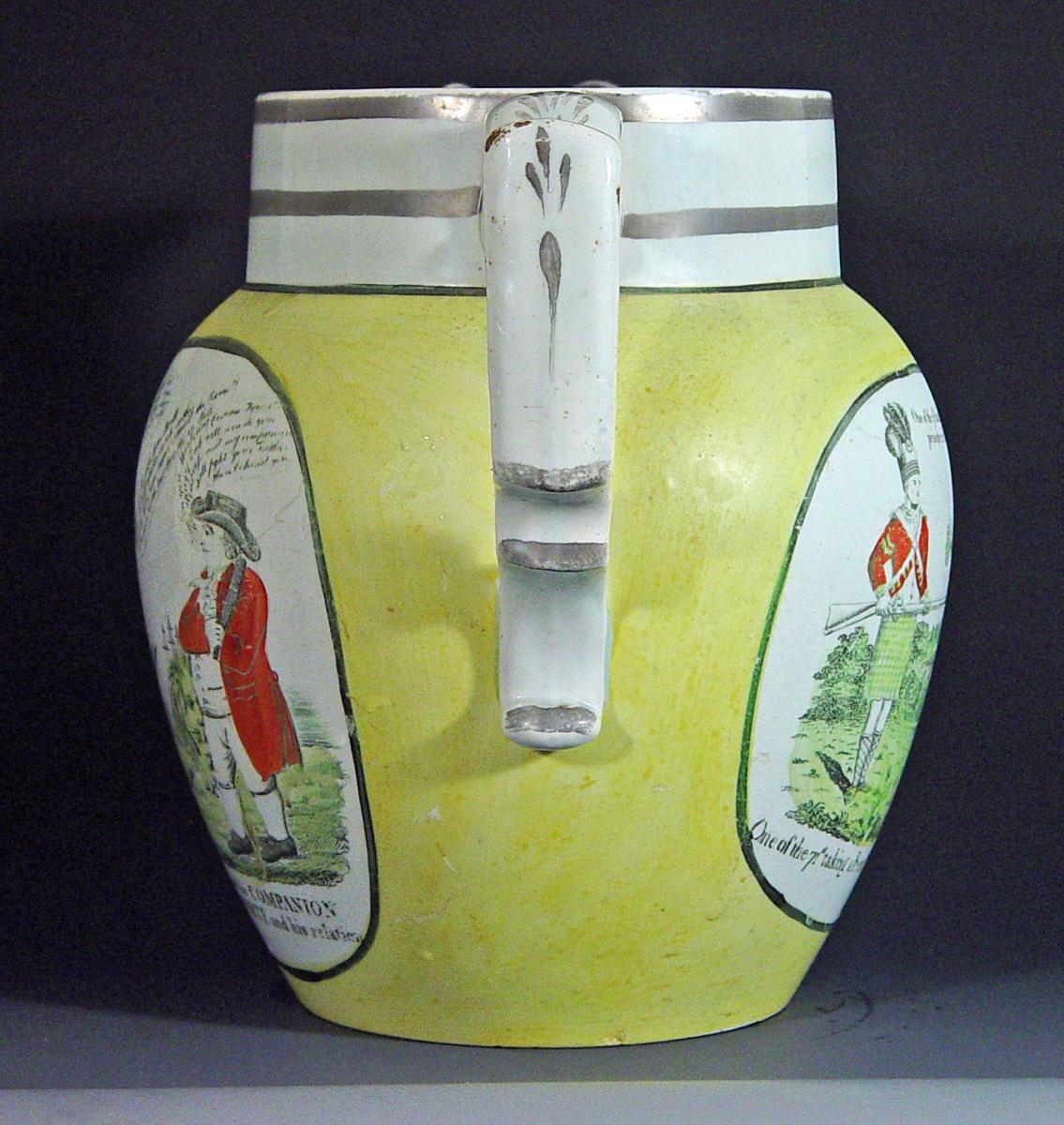 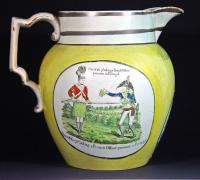 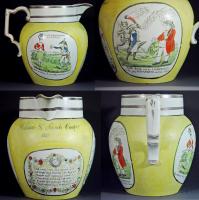 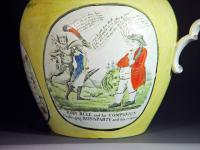 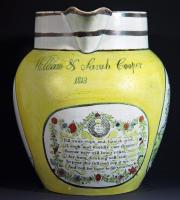 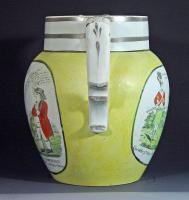 The Regency pearlware yellow jug, dated 1813, has a panel to each side depicting cartoons related to the Napoleonic War.

To one side is a large printed panel titled 'JOHN BULL and his COMPANION Challenging BONAPARTE and his relation' below and image of the Devil behind Napoleon facing John Bull, who stands beside a lion, a ship in the background. Long inscriptions issue from their mouths.

John Bull: "Come on you Murdering Corsican [Tyrant]. This sprig of Oak will soon be your business and my Companion shall fight your Father there behind you".
Napoleon:: "O vat a Terible Jean Bull me be half afraid. Much rather / make Peace now I have obtained the To Reign is worth Ambition the in Hell".

The Devil: "Fight him Dam him, Fight him Bony youll soon come home and you Know how impatiently we all wait for you"

On the other side: "One of the 71st taking a French officer prisoner in Portugal", above an image of a French officer wearing a cocked hat giving up his purse and watch to a Scottish soldier, who wears a kilt and carries a rifle with fixed bayonet.

The jug has the names, William & Sarah Cooper and the date 1813 below under the spout.  The jug has a yellow ground with a white ground around the neck with two silver lustre bands encircling the neck on the outside and on on the interior.

Below the inscription, in an oval white panel is a poem encircled by flowers and below a jug of beer titled Old Tobys Jug.

The poem reads:
Fill your cups and banish grief,
Laugh and worldly care despise,
Sorrow ne'er will bring relief,
Joy from drinking will rife:
So pour this full and sup it up,
And call for more to fill your cup.

Reference:
The Fitzwilliam Museum has a similar jug with the same cartons to each side and a different inscrption below the spout bought by Dr Glaiser in 1907.

Napoleon first appears on English pottery around 1802. The shape of this jug and its images suggest it was made c. 1812-14, at the time of the Peninsular War when Arthur Wellesley, first Duke of Wellington, commanded the British troops against Napoleon and the French. The 71st Highland Light Infantry fought throughout the war, which took place in Spain and Portugal from 1809 until 1814. The image of John Bull and Napoleon driven by the Devil, however, is earlier and draws on caricatures published by S W Fores in September 1803, as England faced the threat of war. The One of the 71st image is found paired with the John Bull image (but on a differently shaped jug) from c.1809-10, and on a jug of this shape, but with an image commemorating Wellington c.1812-13.
(http://webapps.fitzmuseum.cam.ac.uk/explorer/index.php?qu=john%20leech&oid=200072)

71st Highlanders
After redesignation, the 71st Highlanders carried on fighting in India where they fought in the Battle of Pondicherry in 1793 and at Ceylon in 1795. In 1798 after a number of years on active service the effective troops left in the regiment were transferred to the 74th Regiment of Foot and the remainder returned to Scotland by 1802. A 2nd Battalion was formed in 1804. Over the next few years, the regiment changed its name a number of times before becoming the 71st (Glasgow Highland Light Infantry) in 1809 and finally 71st (Highland) Regiment of Foot (Light Infantry). In order to become Light Infantry, the regiment changed the way it trained, marched and fought.

1st/71st Highlanders
The 1st Battalion left Britain for the Cape of Good Hope in 1806 where they were involved in minor actions. In June 1806 they were shipped to South America where they were involved in the disastrous expedition against Buenos Aires by Sir Home Popham. The city was actually captured but later the inhabitants rose against the small British force and took them prisoner. The 1st/71st was one of the battalions captured. Two battalion flags or Regimental Colours were also captured. On the 21st. of April 1808 the regiment received new colours instead of those they had surrendered at Buenos Aires. The colours were presented by General Floyd, a veteran officer.

After reforming the battalion they sailed in 1808 for Portugal where they took part in General Moore's advance into Spain and disastrous retreat out of Spain which ended with Moore's victory at Corunna.

Upon leaving Spain the battalion was sent in 1809 on the Walcheren Campaign. In 1810 the battalion was back in Iberia. They fought all the way through the Peninsular War and were at the Battle of Waterloo in 1815 as part of the 3rd Brigade in Maj.General Sir Henry Clinton's 2nd Division. The 1st/71st lost 16 officers and 171 men killed and wounded at Waterloo.

The 71st Highlanders moved back to Britain in 1865 where they were when the Childers Reforms were carried out in 1881. They were united with the 74th (Highland) Regiment of Foot to form the 1st Battalion, Highland Light Infantry. 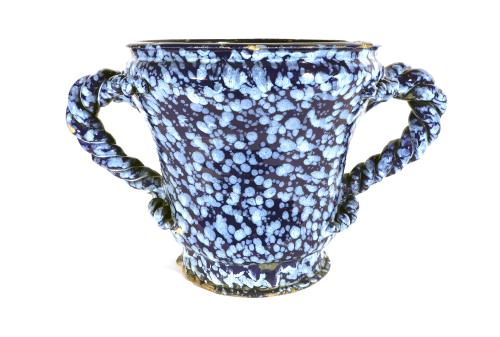 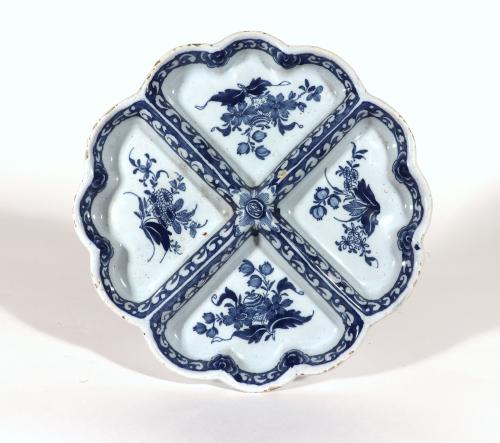 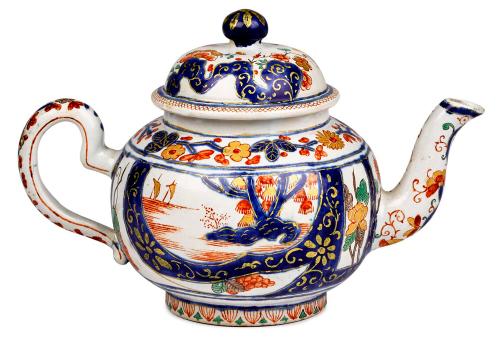