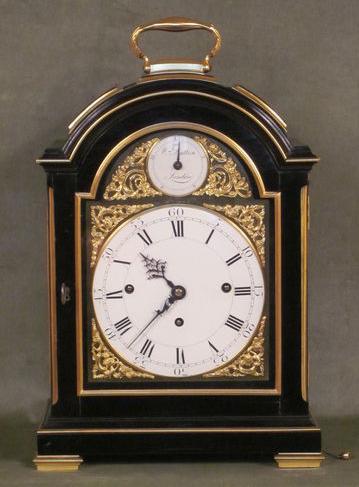 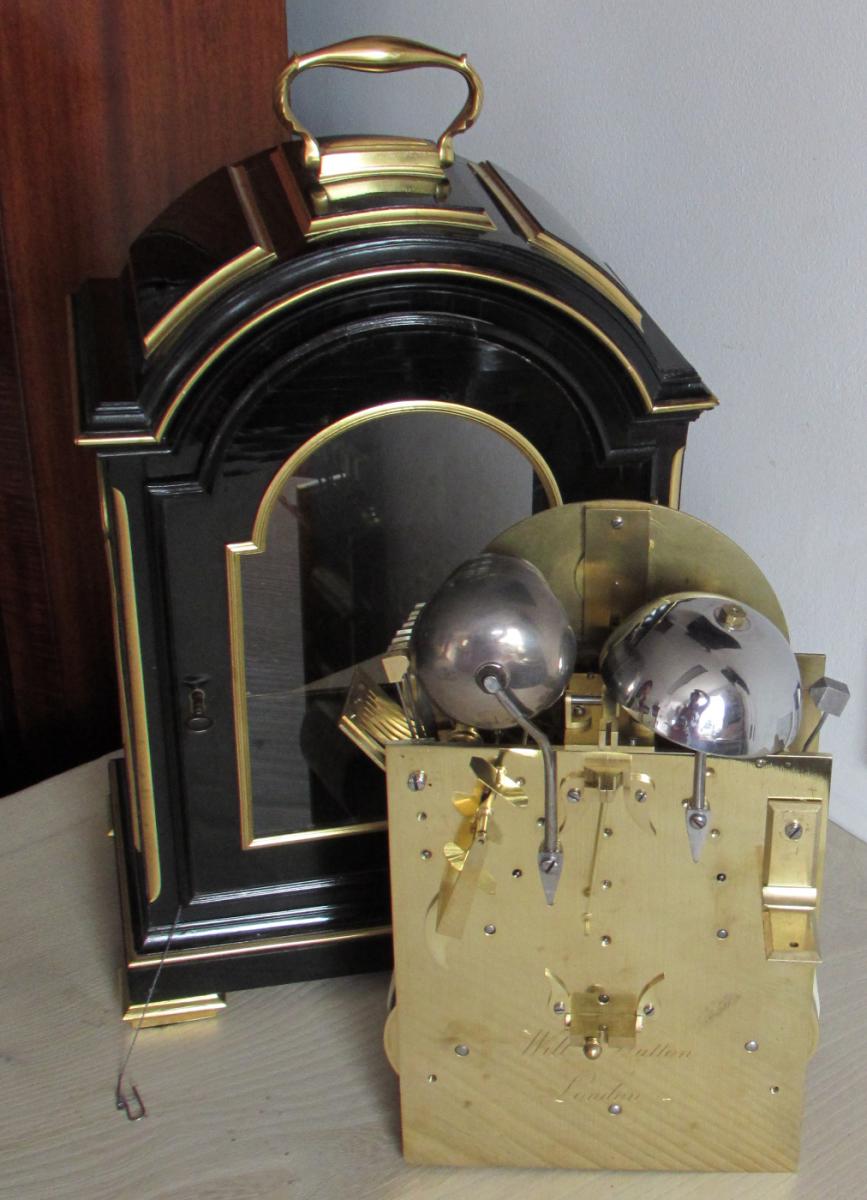 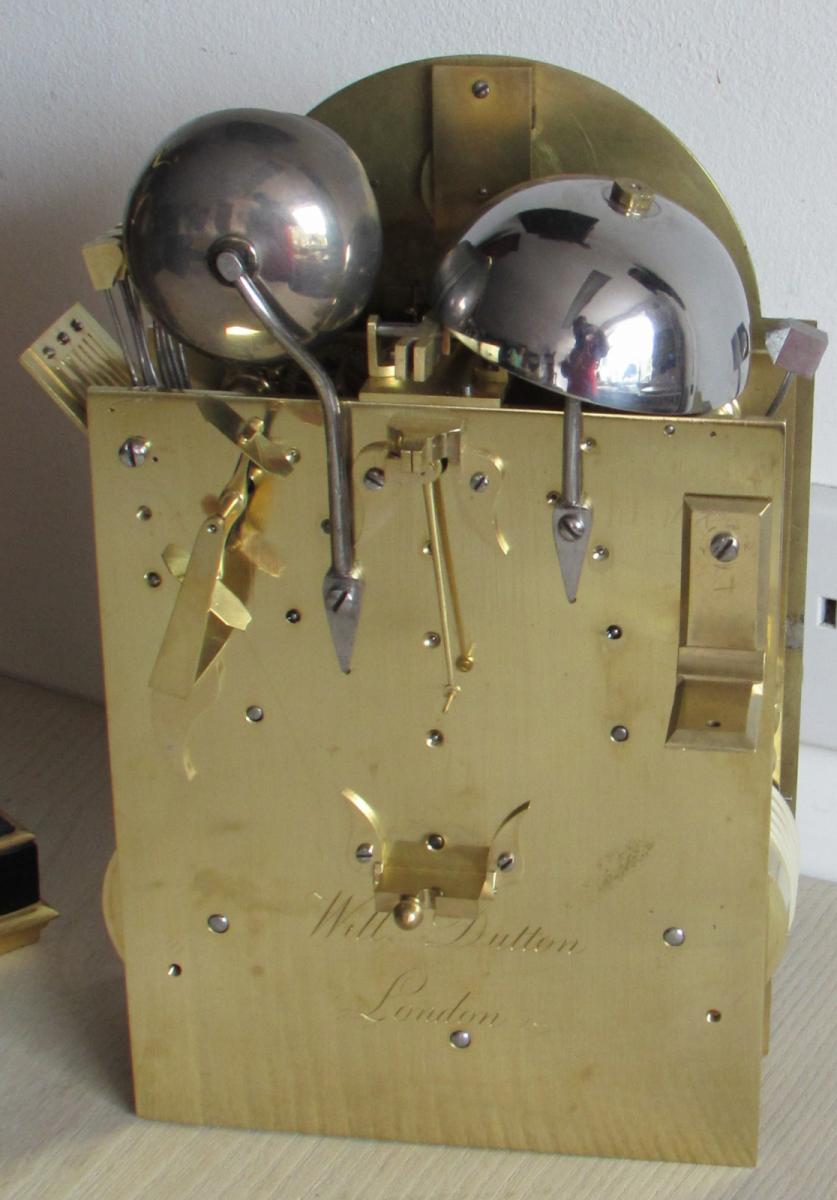 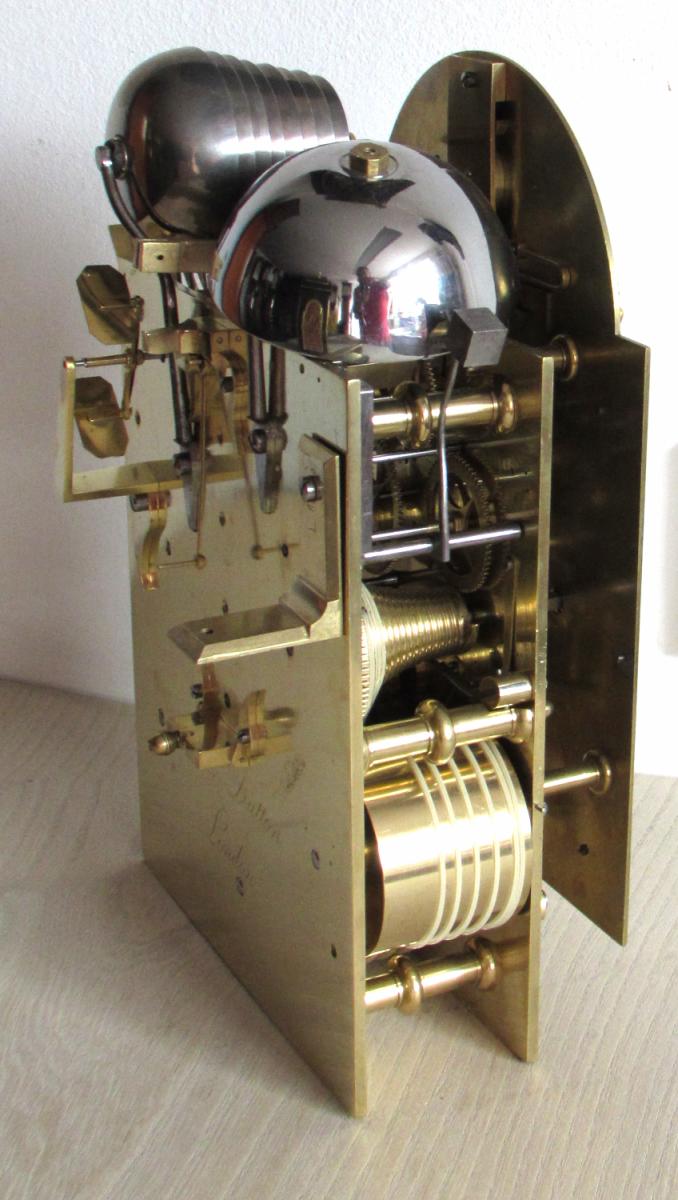 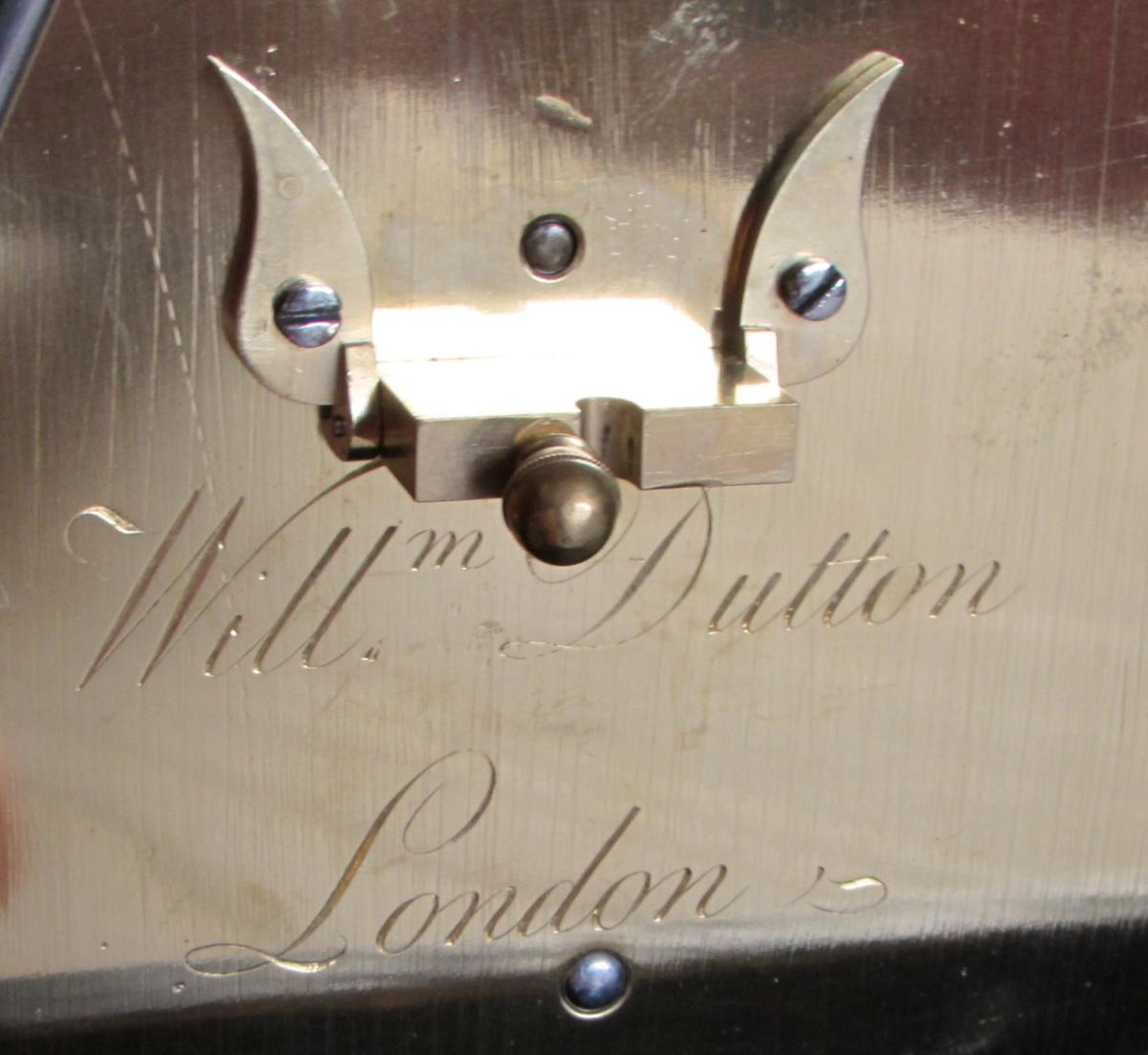 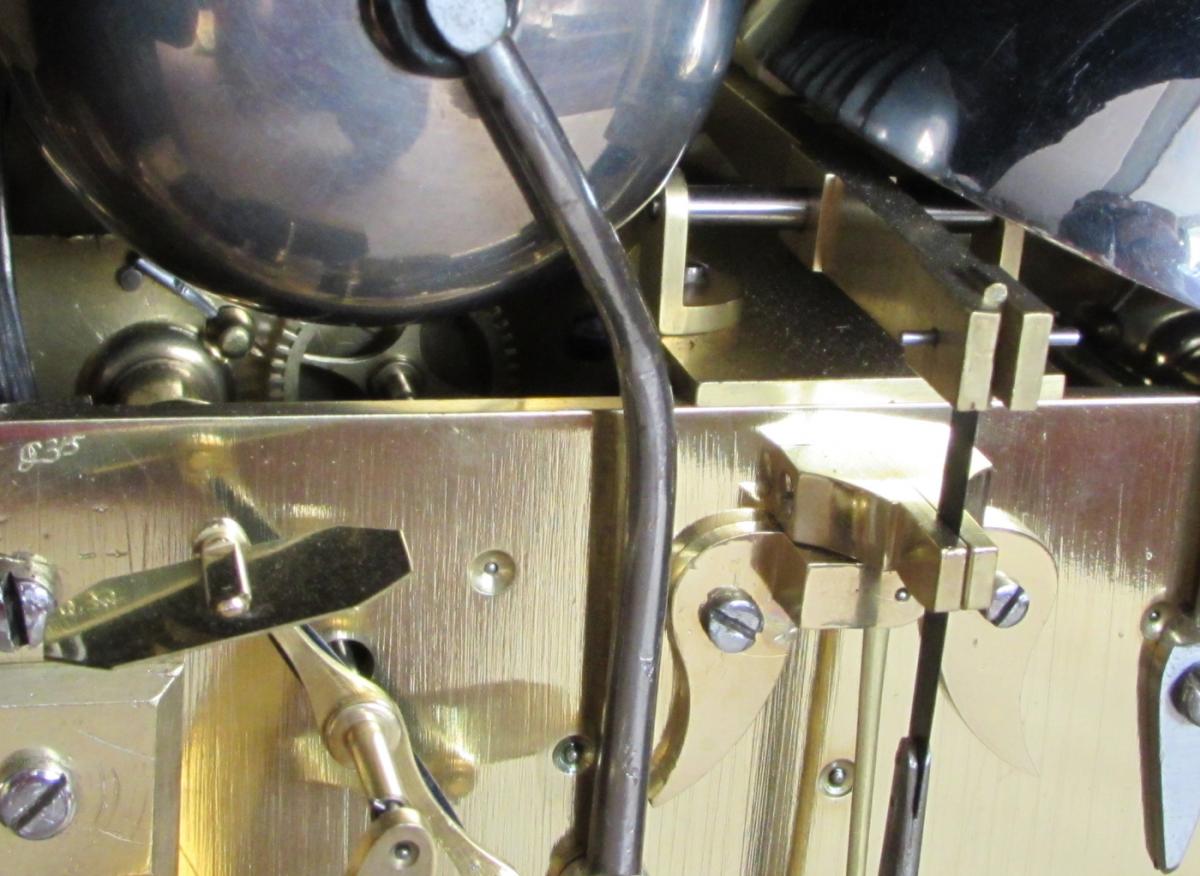 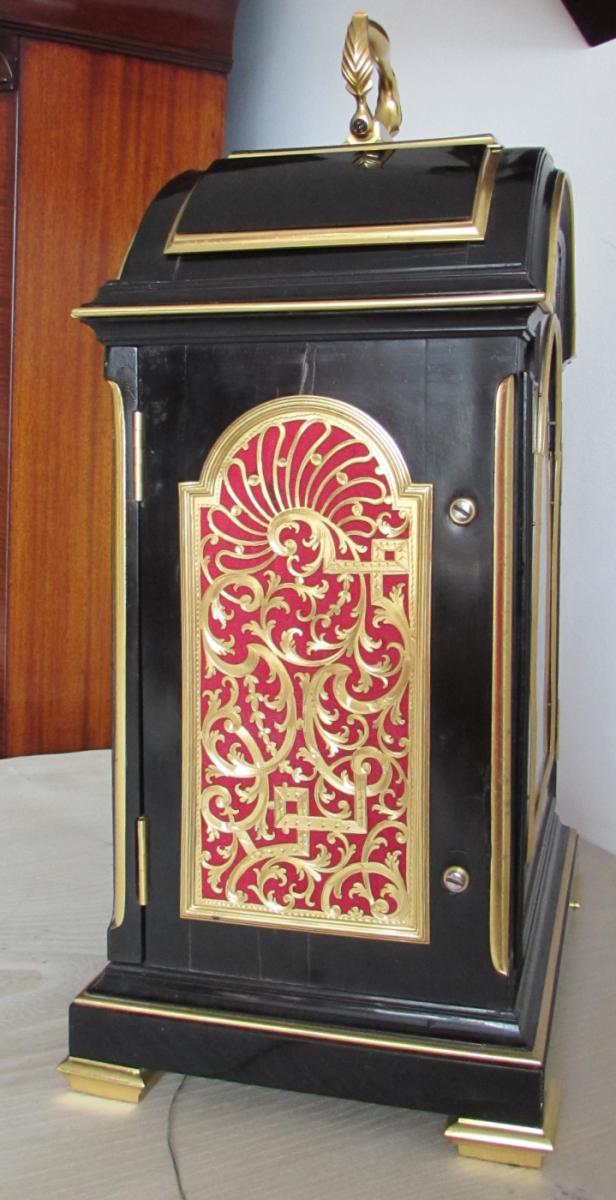 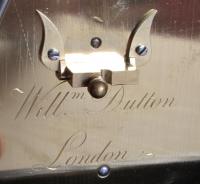 The substantial eight-day duration, three-train fusee movement strikes the hours on a bell and the quarters on a further eight-bells, and is signed on the backplate William Dutton, London. It is held in place by four large brass brackets.

The break-arch dial brass dial has an enamelled convex centre with black Roman numerals and decorative blued steel hands. Within the arch is a further enamelled subsidiary arch for regulating the movement and is graduated with 3, 6, 9, 12, 15-minute markings with the centre signed Wm Dutton, London, the whole with cast-brass c-scroll spandrels to the four corners and arch/silent lever.

The ebonised case has three brass-bound pads to the break-arch top, surmounted by a substantial brass carrying handle. There are finely executed brass sound frets to the sides surrounded by a decorative border, with further brass trim to the top and bottom mouldings, door surround and the canted corners with all standing on cast-brass bracket feet.

​Derek Roberts notes: This clock would have been made by Dutton towards the end of the 18th century. It has all the qualities which one would hope and expect to see on a clock by this well-known maker which is signed on both the dial and backplate, Wm. Dutton, London. The break-arch ebonised case is of the finest quality.

​William Dutton was a fine maker having been in partnership with the eminent clock and chronometer maker Thomas Mudge, as Mudge & Dutton from 1755 until it was dissolved in circa 1790, Mudge having moved to Devon in 1771. Dutton was born in Marston, Buckinghamshire in circa 1720 and apprenticed to Thomas Tompion’s former partner and successor George Graham in 1738, becoming a member of the Clockmakers Company in 1746.

This example shows a number of similarities to those made by the partnership, as well as others by William Dutton and his son Thomas who was apprenticed to his father in January 1776, becoming free in Jan 1791; the use of an enamelled dial, the style of decorative blued steel hands, the circle to the inner aspect of the chapter ring, the regulation dial within the arch, the three-pad top to the case and the use of heavy movement plates. 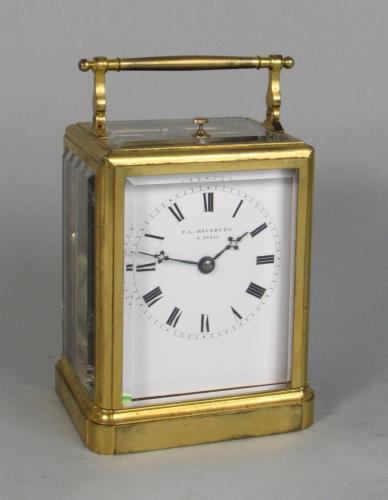 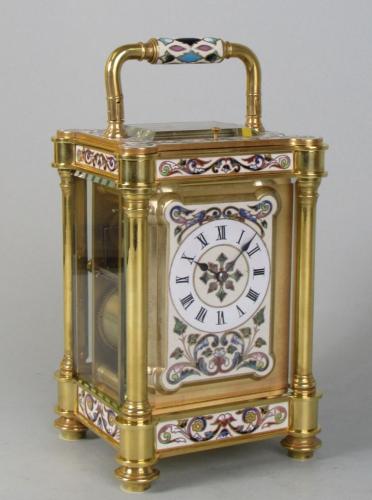 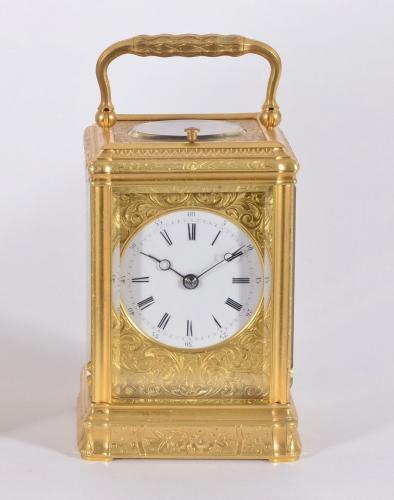