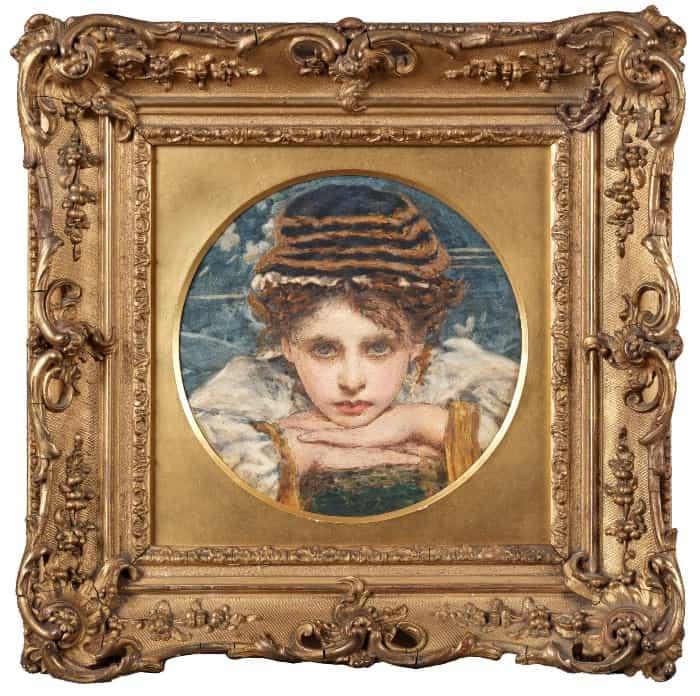 Signed with monogram l.l., watercolour over traces of pencil heightened with bodycolour with scratching out and stopping out, on artist’s board stamped with Charles Robertson & Co.’s stamp, with three labels verso

She exhibited at the Royal Institute of Painters in Watercolour between 1896 and 1902 and also at the Royal Academy, London, the Society of Women Artists and the Walker Art Gallery in Liverpool. Her work is also recorded frequently in Irish exhibitions. Perrin exhibited at the  Water Colour Society of Ireland (WCSI)  which was founded in 1870 as the  Amateur Drawing Society  by an informal group of six well-connected women from Co. Waterford, Baroness Pauline Prochazca, Miss Harriet Keane, Mis  Frances Keane, Miss  Henrietta Phipps, Miss  Fanny Currey and Miss  Fanny Musgrave. Eight years after its founding, the organisation briefly became the "Irish Fine Art Society" before settling to its current name in 1888. It held (and still holds) an Annual Exhibition of the work of its members.

Her work was frequently praised by contemporary critics who remarked on the ‘richness and power’ of her watercolour (Freeman’s Journal, 8 March 1886, in a review of The Irish Fine Art Society exhibition) and she won many prizes at various Irish societies.

One of the backboard labels on this work has her Irish address Fortfield House, Terenure, Co. Dublin, another has a partial address in SW London, …s (Hans?) Crescent, London SW., suggesting that she moved between the two cities.

Perrin took an active part in the social life of Dublin and is often mentioned in contemporary newspapers as attending charitable and major social events such as the Viceregal Drawing Room in Belfast and costume balls.

The artist’s family home, Fortfield House in Dublin, was bought by the Rt. Hon. John Hatchell (1788-1870) in 1858. He was an Irish lawyer and politician and his daughter Penelope married John Perrin. The house remained in the Perrin-Hatchell family until the death of Mary Perrin in 1929. In her will she left her estate to George Hatchell of Tanganyika. The house was demolished in 1934.