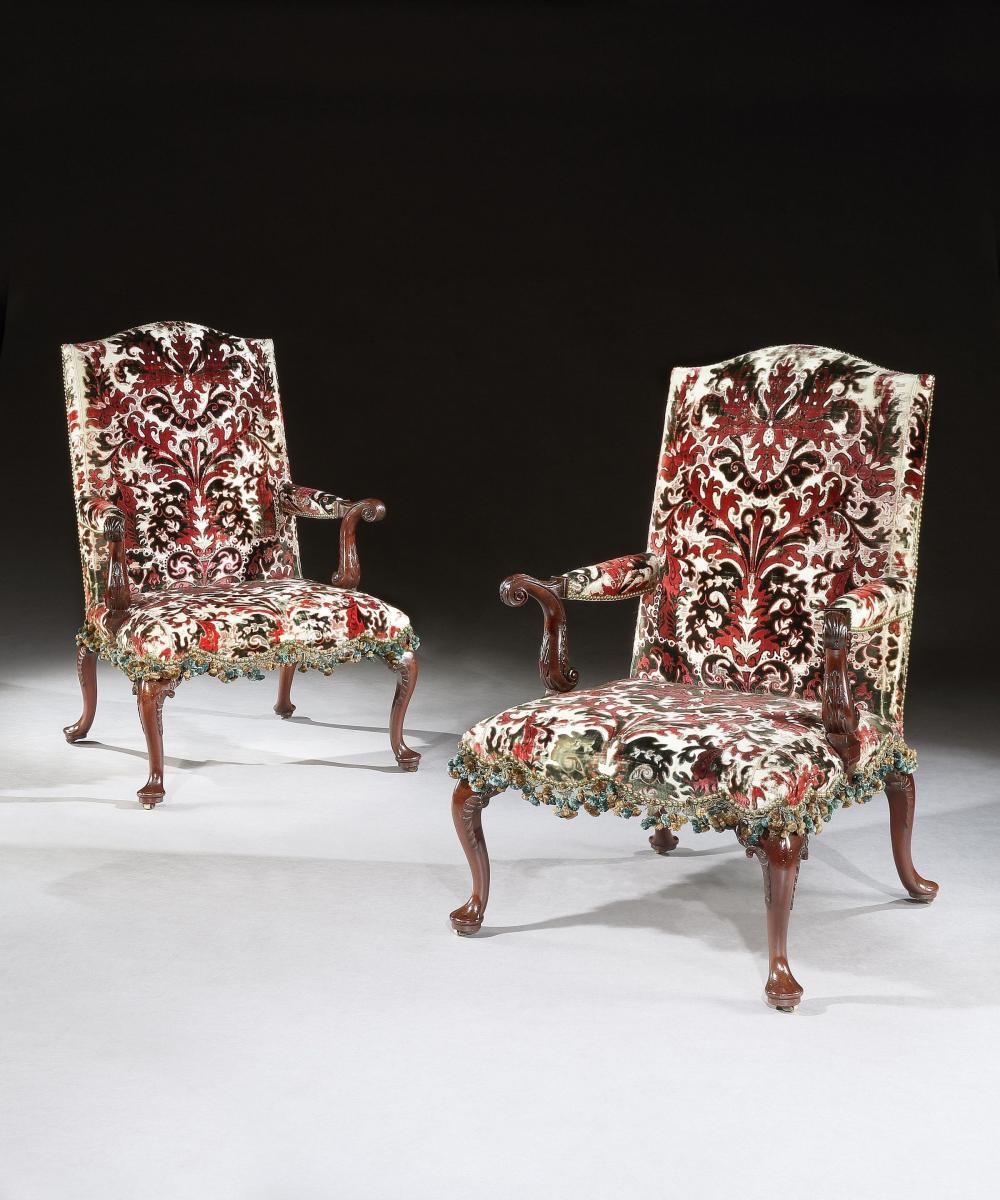 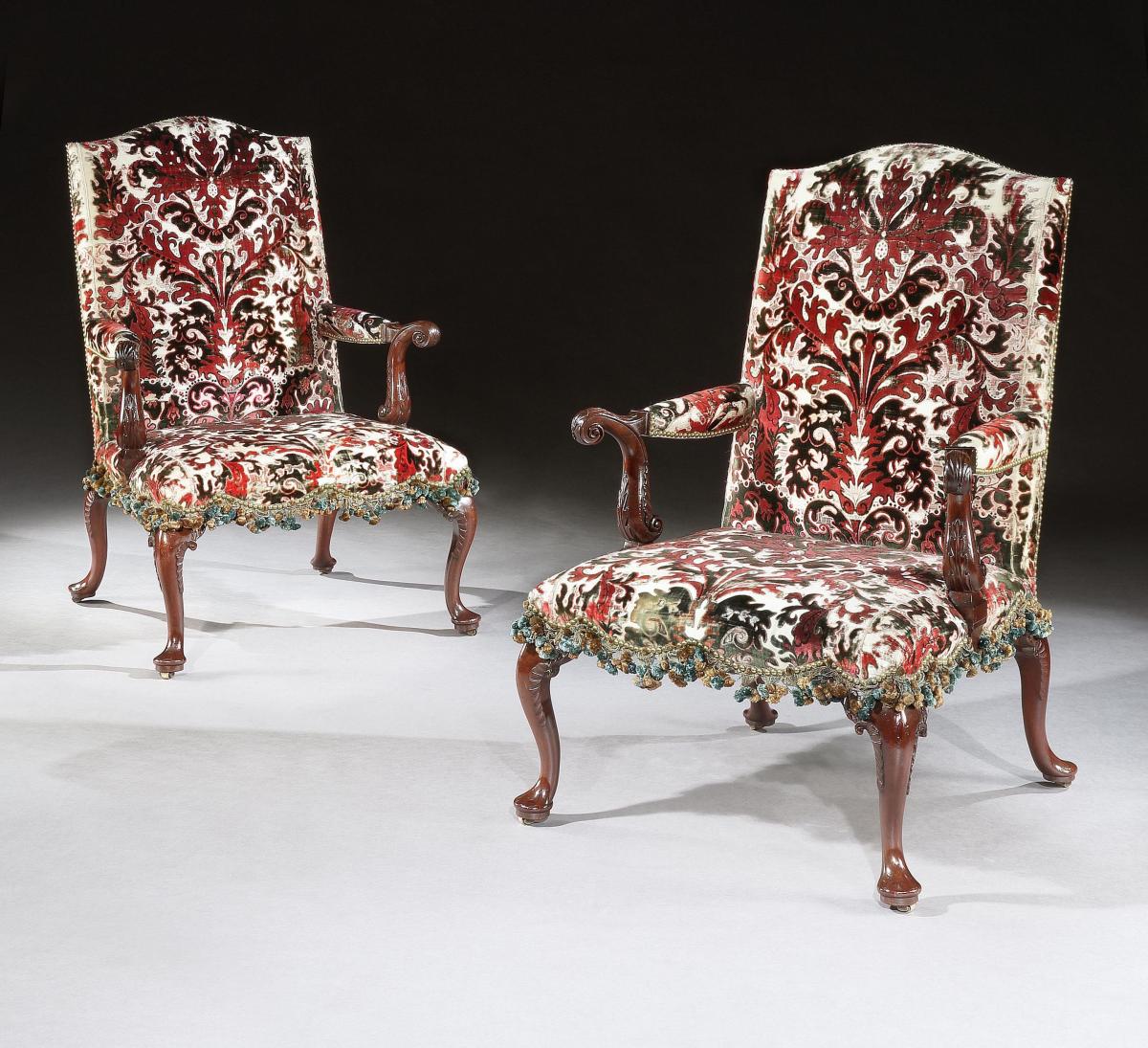 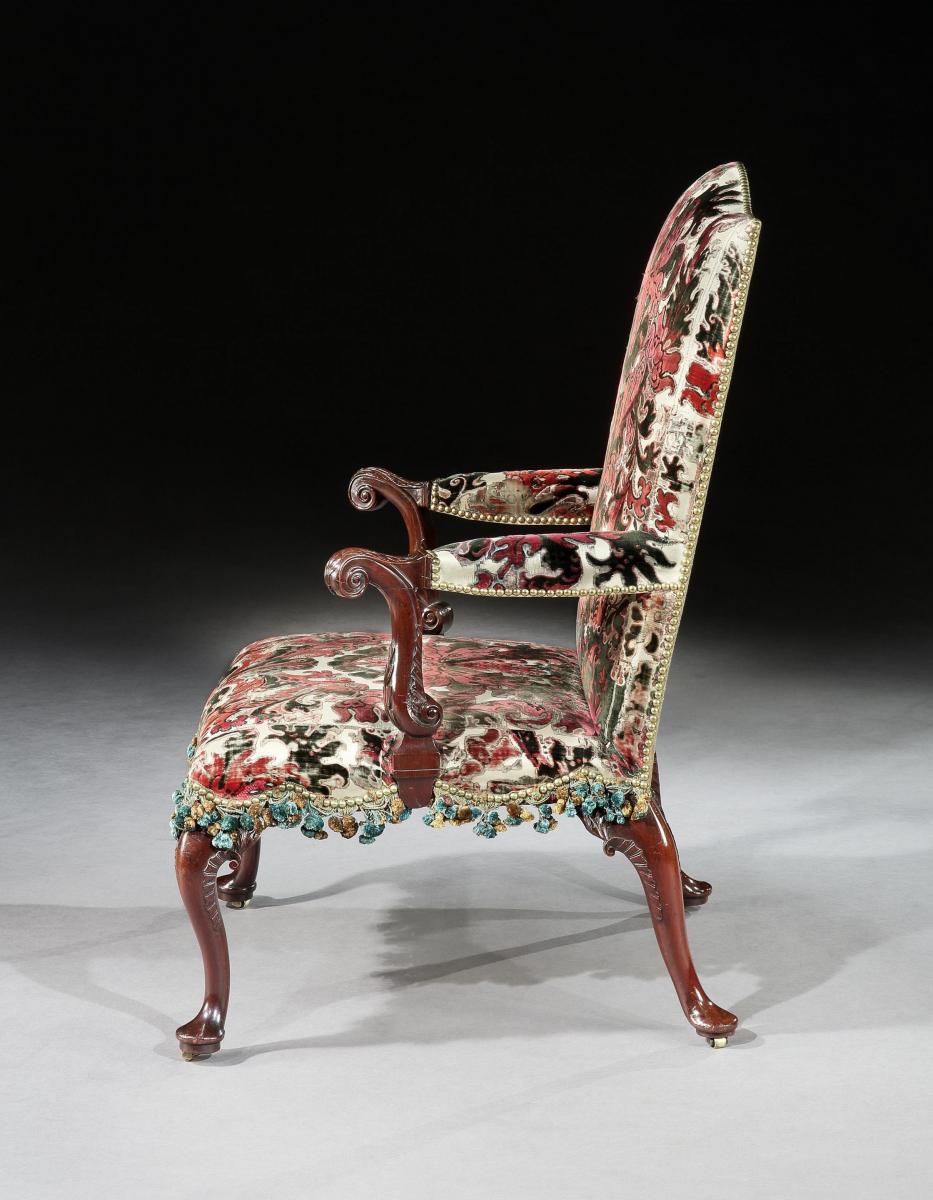 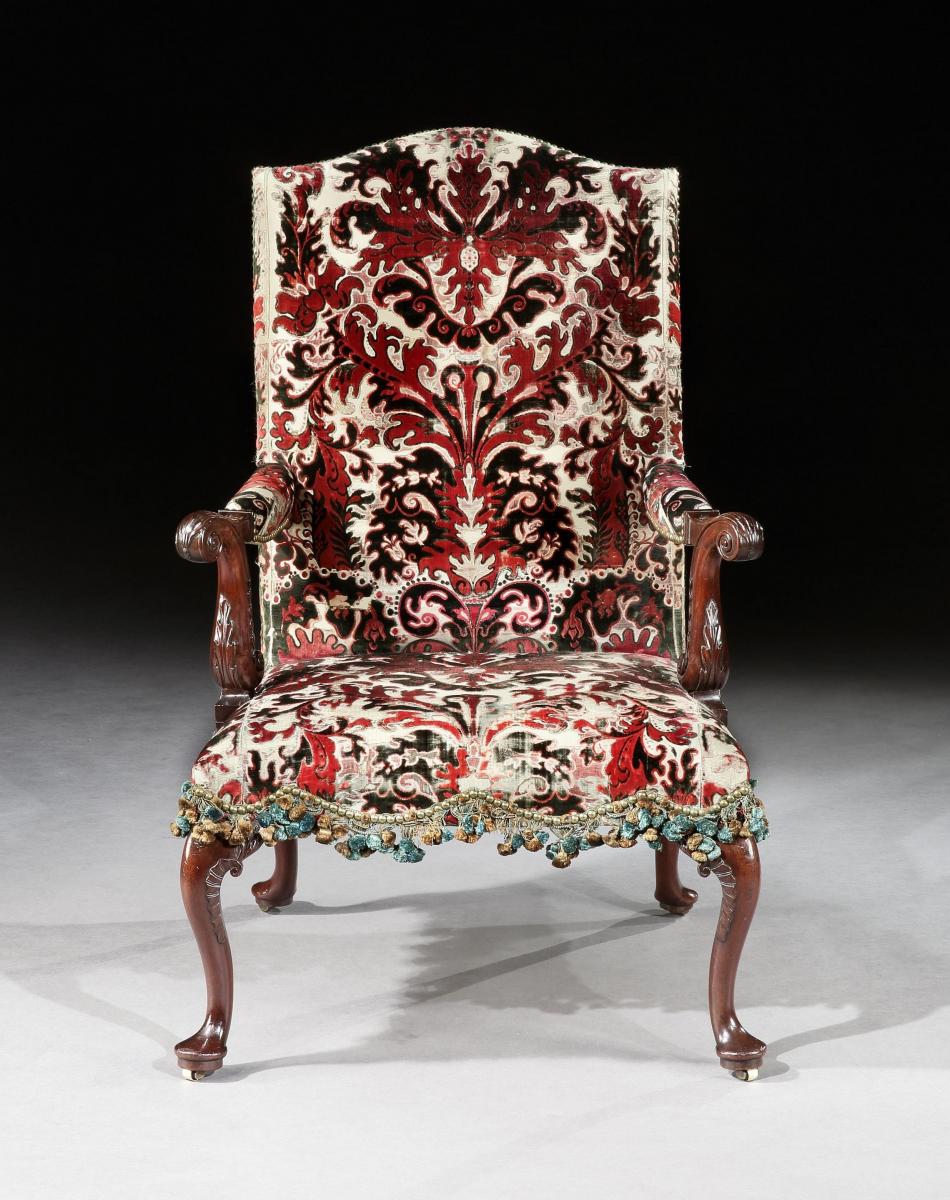 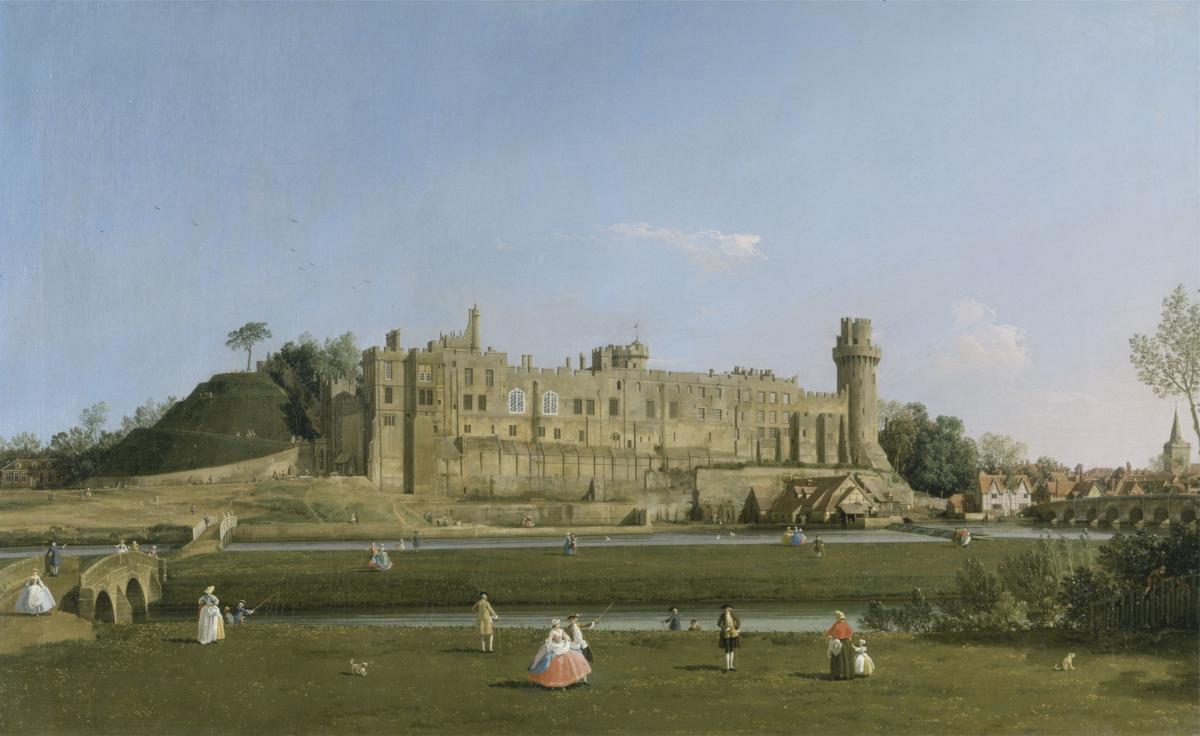 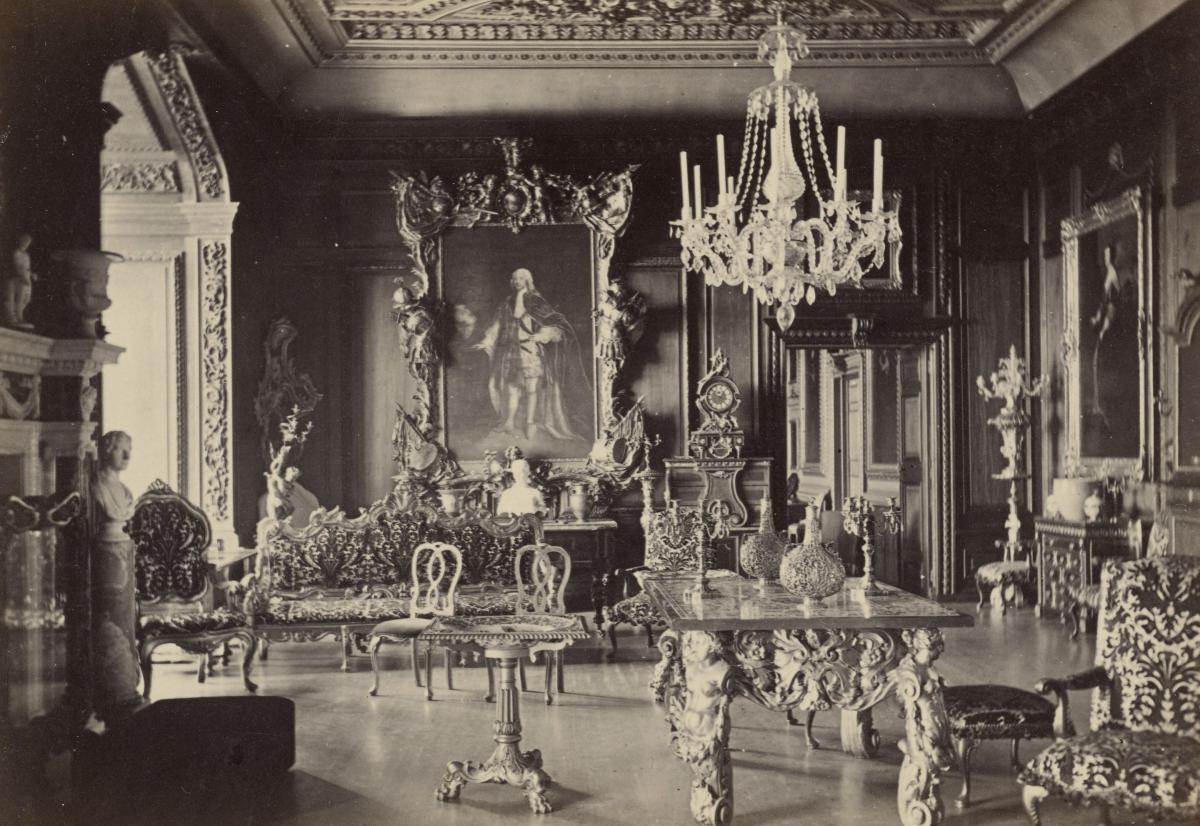 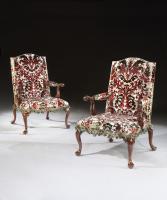 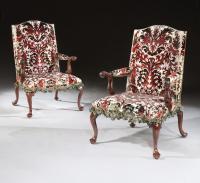 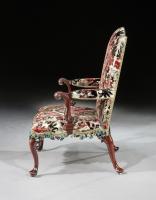 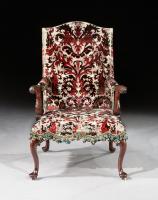 Photographed in situ in the Cedar Room at Warwick Castle.

The Warwick Castle Inventories
This magnificent pair of chairs appears to have originally formed part of a larger set of twelve armchairs, three stools and possibly two settees. They are first mentioned in the 1756 inventory of Warwick Castle in the Cedar Drawing Room as ‘12 Arm’d chairs of cut velvet’ (Warwick County Records Office 1886 TN926).

The chairs appear again in the 1809 inventory of the Cedar Room as ‘12 mahogany chairs, stuff’d back & elbows & tapestry covers’ ‘2 mahogany stools, stuff’d and covered’ (WRCO, CR1886 Box 466). An 1853 inventory of the contents of Warwick Castle dated 31st October 1853, carried out following the death of Henry Greville, 3rd Earl of Warwick (1816-1853), Gentleman of the Bedchamber to King George IV, records in the Cedar Drawing Room ‘12 elbow mahogany frame chairs, embossed velvet backs’ together with ‘2 couch stools with Do Do’ and ‘1 large couch stool with embossed velvet cushions’ (WCRO, C.R1886/783/16, pp. 15-16). The 1894 inventory of the heirlooms of The Right Hon, George Guy Earl Brooke and Earl of Warwick deceased taken for the purposes of probate on 9th March 1894 includes ’12 Queen Anne Large armchairs backs and seats in velvet brocade’ ‘Pair 2ft Queen Anne stools tops in velvet brocade’ (WCRO, CR3508/2, box 708).

They are also recorded in an 1815 etching of the Cedar Room by John Coney, a 1844 lithograph, the Christies’ inventories of 1907, 1928 and 1961 and the 1924 ‘Schedule of articles at Warwick Castle which are of national or historical interest’, p.14 (WCRO).
Warwick Castle and the Commission
The suite of State Rooms at Warwick Castle include the Red Drawing Room, the Cedar Drawing Room, the Green Drawing Room, the Queen Anne Bedroom, and the Blue Boudoir. These rooms were originally created by Robert Greville, 4th Baron Brooke (1638-1677) who had married a rich heiress, Ann Doddinton. Most of these rooms retain their original features, although the Green Drawing Room ceiling dates from the 1760s when the newly created Earl of Warwick extended the State Rooms to the designs of Thomas Lightoler (active 1742-1775).

These highly important chairs are first recorded at Warwick Castle in an inventory from 1756 in the Cedar Drawing Room as ‘12 Arm’d chairs of cut velvet.’ They were almost certainly commissioned by Francis, 8th Baron Brooke (1719-1773), who was created 1st Earl Brooke of Warwick Castle in 1746 and 1st Earl of Warwick in 1759. In 1742 he had married Elizabeth, the daughter of Lord Archibald Hamilton, younger brother of William, Duke of Hamilton, and sister of Sir William Hamilton. Sir William was one of the great cognoscenti of his age and George III’s ambassador to the Court of Naples and husband of Emma, the mistress of Horatio Nelson.

The style of the armchairs corresponds closely to the date of this marriage, an event which inevitably occasioned changes to the decoration of the State Rooms at Warwick, including the provision of the latest fashionable taste in furnishings and fabrics. The vast expense of such quantities of imported silk velvet, let alone the quality of the carved frames, highlight the importance of this particular commission.

The Attribution to John Hodson
Until now, there has been no suggested attribution as to the maker of this outstanding and highly important suite of seat furniture. Thanks to archival research of the original London account books of the Greville family, we are delighted that it is now possible to attribute the chairs to the highly regarded, albeit largely unsung, London cabinet-maker John Hodson (1709-1786).

John Hodson came from a family of cabinetmakers, including his father, Robert Hodson, who operated in Firth Street, Soho from 1723 until 1786. Robert Hodson is recorded as corresponding with the Earl of Radnor in September 1725 regarding a ‘Looking Glass and Cabinet Warehouse’.

The Hodson firm’s trade label features illustrations of a variety of furniture, including an upholstered chair, kettle stand, console table, and pier mirror all stylistically in keeping with our chairs. The label reads:

At Hodsons Looking Glass and Cabinet Warehouse in Frith Street Soho, is ready made great variety of all sort of Furniture in the neatest and most Fashionable manner, by choice and experienc’d Workmen employ’d in his house. By which means Customers may the better depend on the goodness of ye materials and duration of the Work: There are also many well contriv’d Machines for weak and Sickly people, all perfomd at moderate prizes, and in the utmost perfection. N.B. Coach, Chair, and Sash Glasses are sold, at the very lowest prizes.

Hodson’s billhead is interesting in emphasising that his workmen are ‘employ’d in his house,’ suggesting that presumably most of the pieces he created came from his own workshops by his own craftsmen, rather than brought in or outsourced from other suppliers as others were known to do. This also allowed them to keep an eye on the quality of the work and prevented delays: ‘may the better depend on the goodness of ye materials and duration of the Work’.

John Hodson received numerous notable commissions throughout his career from leading lights of the aristocracy of the day. In particular, he is known to have supplied mahogany tables, at a cost of £44, to the Earl of Leicester for Holkham Hall, Norfolk, a tripod table, mahogany claw table, painted side table, and wine cooler to the 2nd Duke of Atholl at Blair Castle for £150 1s 6d, and a mahogany dining table to Sir Herbert Pakington of Westwood Park, Worcestershire for £3 10s.

The accounts at Hoare’s Bank, for the period in question, list John Hodson as the principal documented cabinet-maker employed by Lord Brooke with very significant amounts being settled over a lengthy period of time. In particular, reference can be made to payments to Hodson of £443 3s 3d on 5 Jan 1742 (the year of the marriage), £540 on 9 April 1743 and £300 in 1746.
The documented wine-cooler, or ‘neat-mahogany cistern’, supplied to the 2nd Duke of Atholl for Blair Castle in 1738 is of particular interest. This documented piece allows a closely related identifiable group of similar wine-coolers to also be attributed to Hodson. The carving to the frieze of one of these wine-coolers, previously with Hotspur Ltd., part of the Jerome C. Newhoff Collection and sold at Christie’s New York, 21 October 2014, is identical in form to that on the legs of our chairs.

Stylistic affinities between our chairs and other pieces either known to be by or attributed to John Hodson, together with the significant payments in the Brooke accounts, do allow for a firm attribution to be made.

The Upholstery
The polychrome silk panels, circa 1740, used to upholster these chairs, are consistent with the early ‘Genoese’ velvets used to upholster furniture. The term ‘Genoa velvet’ became the generic term for all Italian velvets (velluti) from the Renaissance until the 18th century, irrespective of where they were actually made.

The woven velvets and silk brocades were produced in narrow widths, which when used to upholster wider chairs, resulting in joining panels. As is evident on our chairs, the side sections and curves around the upholstery reveal the joined widths. The velvet type known as ‘Genoa velvet’ featured a large patterned design in one or several colours in silk pile against a plain or satin ground. The principal centres of production were Genoa, Venice and Milan, as well as small cities such as Modena. These particular patterned velvets of silk were prestigious, luxurious, and extremely expensive to obtain.

The chairs retain their original silk velvet covers which have been painstakingly re-backed to preserve them as intended.