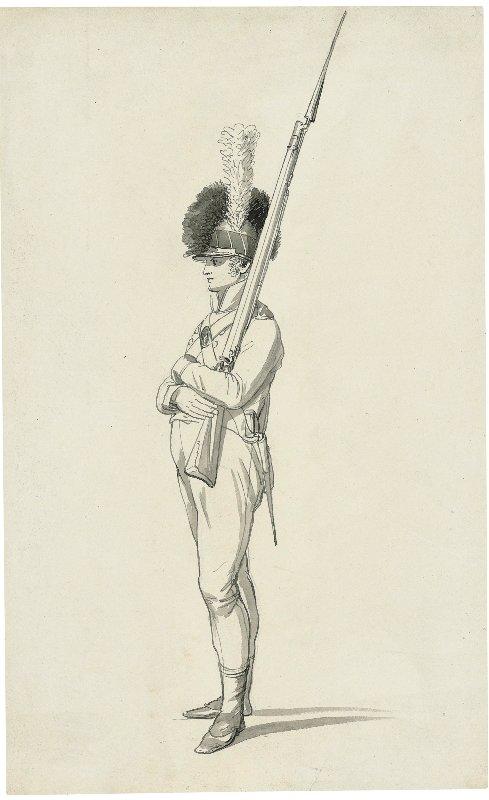 In 1798-9 Rudolph Ackerman published Rowlandson’s Loyal Volunteers of London & Environs, with 87 plates which record the uniforms and weapons of the infantry and cavalry.

The volunteer corps were raised as a response to the perceived imminent danger of invasion by the French Napoleonic forces. Rudolph Ackermann notes in his introduction that 'At this moment, the enemy had advanced their best regulated legions to the shores of the British Channel; and for the determined purpose of spreading through our land such miseries as have already rendered wretched their own'.

The British response was immediate and defiant, and Ackermann goes on to note that when the Loyal Volunteers of London were inspected by the King on 21st June 1799 the roll-call of volunteers, manning 11 different positions, totalled just over 12,200 men.

The book serves as a record of that overwhelming show of loyalty, as well as of the uniforms of all the main volunteer forces. In addition, Rowlandson places each individual in a particular drill position, the name and details of which are given in the engraved text beneath each figure.

John Ross (1919-2011) kept his collection of drawings and watercolours at his regency home, Knockmore, outside Dublin. Ross was an active member and Chairman of the Irish Friends of the National Collections, playing an important role in securing many great works for the national collection.