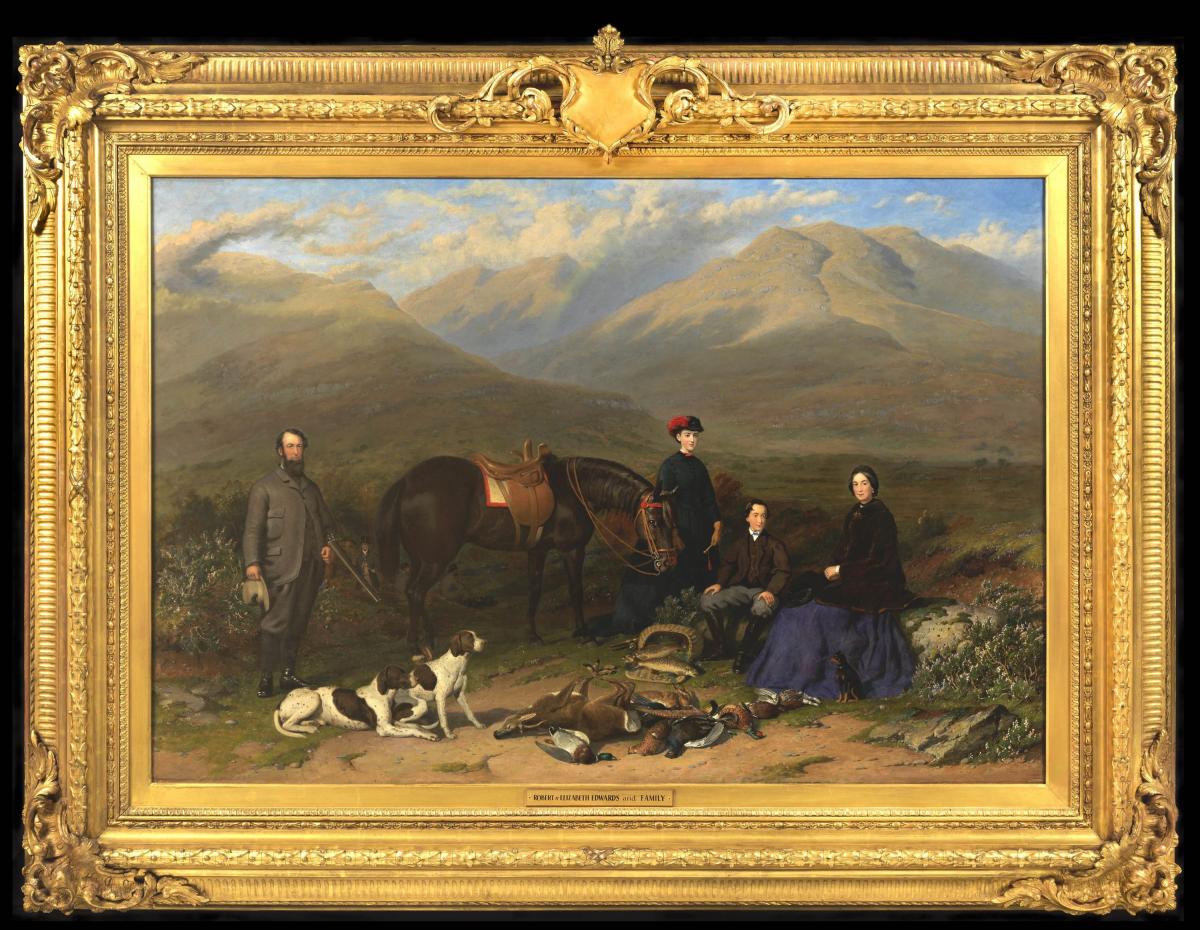 “A View of Cumloden in the Highlands of Scotland” : Robert and Elizabeth Edwards with their son and daughter and their favourite pointers and pony and a mixed day's bag; their old coachman beyond.

Provenance: by direct descent until the present

Jacob Thompson was the son of the Quaker business man Merrick Thompson, who was a prosperous manufacturer of linen cloth in Penrith, where he was amongst the most substantial local employers. The family had a long history in the locale, where they were among the intellectual gentry; the family were all members of the Society of Friends. The latter years of the Napoleonic Wars around 1812 caused a slump in industrial production for the export trade, and a consequent deep recession. This lead directly to the family's fiscal ruin when the young Jacob Thompson was aged about six (he was born in Penrith on the 28th April 1806). He was raised mostly by a devoted nurse, Hannah Hewitson, who contributed her small resources to obtaining a place for him at the Free Grammar School in Penrith where he obtained the rudiments of a classical education and a grounding in subjects which his family considered appropriate to a commercial career. He reciprocated her kindness throughout his life, and supported her both with his life-long affection as well as  financially when she was of advanced years. His father disapproved of the 'vanity' of the Arts, but he was greatly encouraged by Hewitson who obtained suitable matter for him to copy. As a youth, he developed his other life-long passion: he became a devoted fly-fisherman.

Thompsons forays into the world of commerce were not a success. His parents desired to prevent him from taking up “so vain a pursuit” as art, and at the age of fourteen placed him with a local grocer and banker, Mr Drewry, to learn that trade. It was soon apparent to both parents and apprentice-master that Thompson was wholly unsuited to such a calling, and he was placed with a certain Joseph Porter, “coach, house, sign and ornamental painter” in Penrith. The apprenticeship lasted but two years, when the arrangement was cancelled by mutual consent, and he set himself up as a journeyman house-painter. He was allocated a space in his (now-bankrupt) father's factory where he started a precarious business painting sign-boards, name-boards for carts and painted effects on furniture. His earliest attempts at easel-painting began to be produced, and these were occasionally sent for exhibition at Carlisle, where he first encountered professional paintings.

Slowly, the quality of his painting improved and his commissions from local patrons grew. Initially, these were the routine commissions of favourite dogs and horses, fat cattle and the like. Thompson's real interest lay in landscape painting, which he studied assiduously. During Penrith races, when the grandees of the region were in town, Thompson took himself off to sketch along the banks of the river Lowther, away from the crowd. A passing horseman, likewise avoiding the throng, paused to look at his efforts, and offered a few words of kindly advice. The meeting proved seminal, because the horseman was the local Maecenas, the Earl of Lonsdale – one of the richest men in England. An invitation to Lowther Castle led to a series of small commissions, and Thompson's career was launched. Through Lonsdale's intercession, Thompson was finally introduced in 1829 to Sir Thomas Lawrence PRA, who encouraged him to become a student at the Royal Academy. His first painting was exhibited at the RA in 1831: a conventional Landscape with figures and sheep; exhibited pictures tended to be of narrative subjects.

The introduction to Lonsdale led to a series of commissions of family portraits of that family, followed in swift succession by invitations to paint the portraits of the owners (and the scenery) of major houses: the Duke of Argyll at Inverary; the Marquis of Bute at Mount Stuart and Luton Hoo; the Earl of Lindsey at Huffington and the Earl of Hardwicke at Wimpole all followed in rapid succession, along with numerous other portrait and landscape commissions from landowners throughout England and Scotland. In the following decade, Thompson developed a loyal and grand clientele, very much the 'establishment' painter of his local region. By 1845, he was painting two paintings for an altarpiece -'grand in conception and noble in execution' - for St Andrew's church in Penrith (where they remain) and for which he was paid 100 guineas – a considerable sum. But Thompson's art was only occasionally in the 'higher' realms of history and religious painting. His forte was landscape painting, but as always at this date, with elements of portraiture or genre. In this field he had few competitors of merit in the north of England. Settled at a house at Hackforth (courtesy of Lord Lonsdale) he ventured forth throughout the Lake District and Scotland painting views. Like so many artists of the era, he was tempted on a grand tour to Italy, where he busied himself sketching the scenery and the peasantry and absorbing the genuine Old Masters which he had copied from prints as a youth.

The present painting was executed on a trip to the hilly northern part of Dumfries in 1868, his last major commission before departing for Italy the following spring. Cumloden was a house and estate just north of Newton Stewart rented from the Earl of Galloway by the Liverpool businessman Robert Edwards, who is depicted hold his shotgun on the left of the picture; his wife, Elizabeth, his son and daughter. Edwards owned several pictures by Thompson, including a large watercolour of “Myrtle Bridge”, and a view on the river at “Auchinleck”, both on the Cumloden estate. His wife was given a small picture 'Miningaff Churchyard View' by the artist at this time.

Edwards was like so many Victorian industrialists who trecked northwards for the grouse, the stalking and the fishing during the Summer. He seems to have done this for a number of years, and is recorded in the Post Office directory for Cumloden from at least 1862 onwards. The present house at Cumloden was build in 1875.

Thompson himself, as we have seen, was a keen fly-fisherman, and enjoyed sporting excursions to Scotland, where he joined the Edwards family. In a letter of 1866 he says:

“I have a deep impression on my mind that I have been three months in Scotland at the residences occupied by the merchant princes of Lancashire during the shooting season, where ladies wear long trains and gentlemen black velvet dresses, knickerbockers, silk stockings and silver buckles. I have tasted a scotch haggis and eaten game until I preferred mutton; I have caught sea-trout in the Renkill Burn and painted brown trout from solitary Loch Dee, where the only postal communication the inhabitants of the Loggan have with the outer world is by the shepherds depositing (when at the extreme end of their boundary) letters beneath a stone at the top of the pass, which shepherds from the Auchinleck side of the hill find and convey to Nisk, from thence by Postman to Newton Stewart

We spent one moth among the peat reek in a herd's cottage, far, far away from civilisation, while our tent stood among blooming heather, surrounded by the grand old hills, and I have brought back with me a family picture – figures, horses, dogs, fishes, &c. - which is an heirloomin the family of Robert Edwards, Esq., of Whinmoor Park, Liverpool. It will engage my attention until the close of the year 1866.”

The resultant painting, here exhibited for the first time since it was painted, is without question amongst the most accomplished and important works by the artist