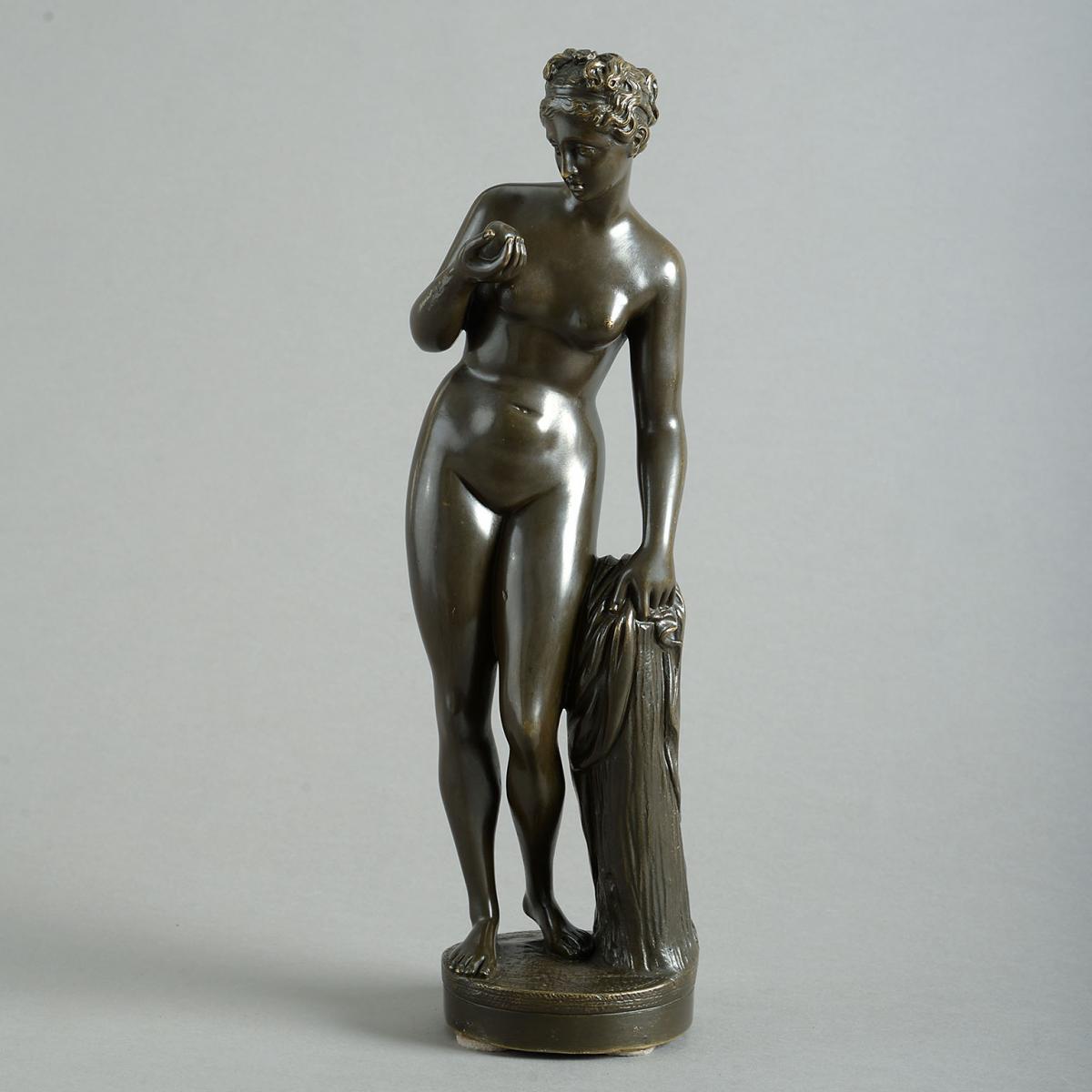 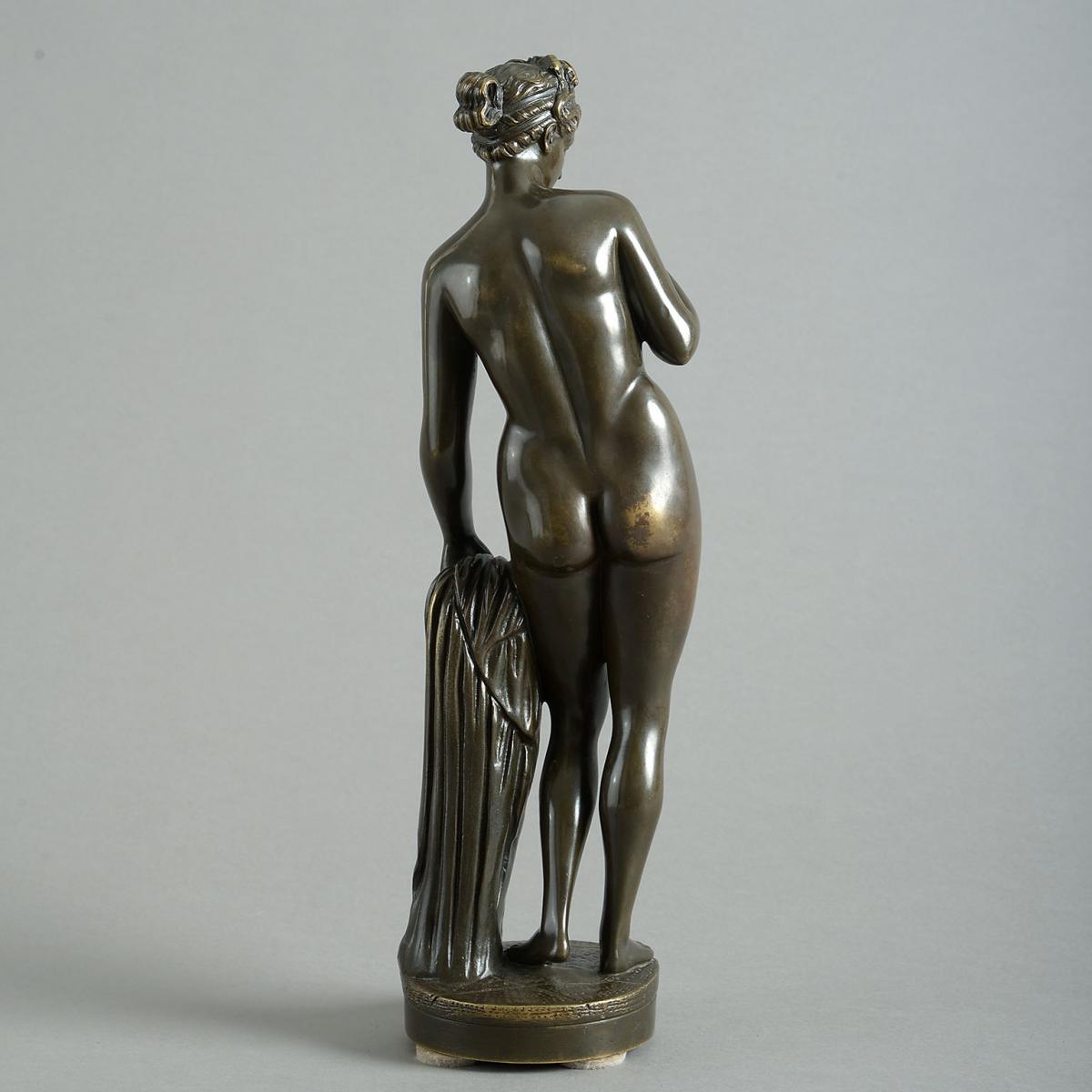 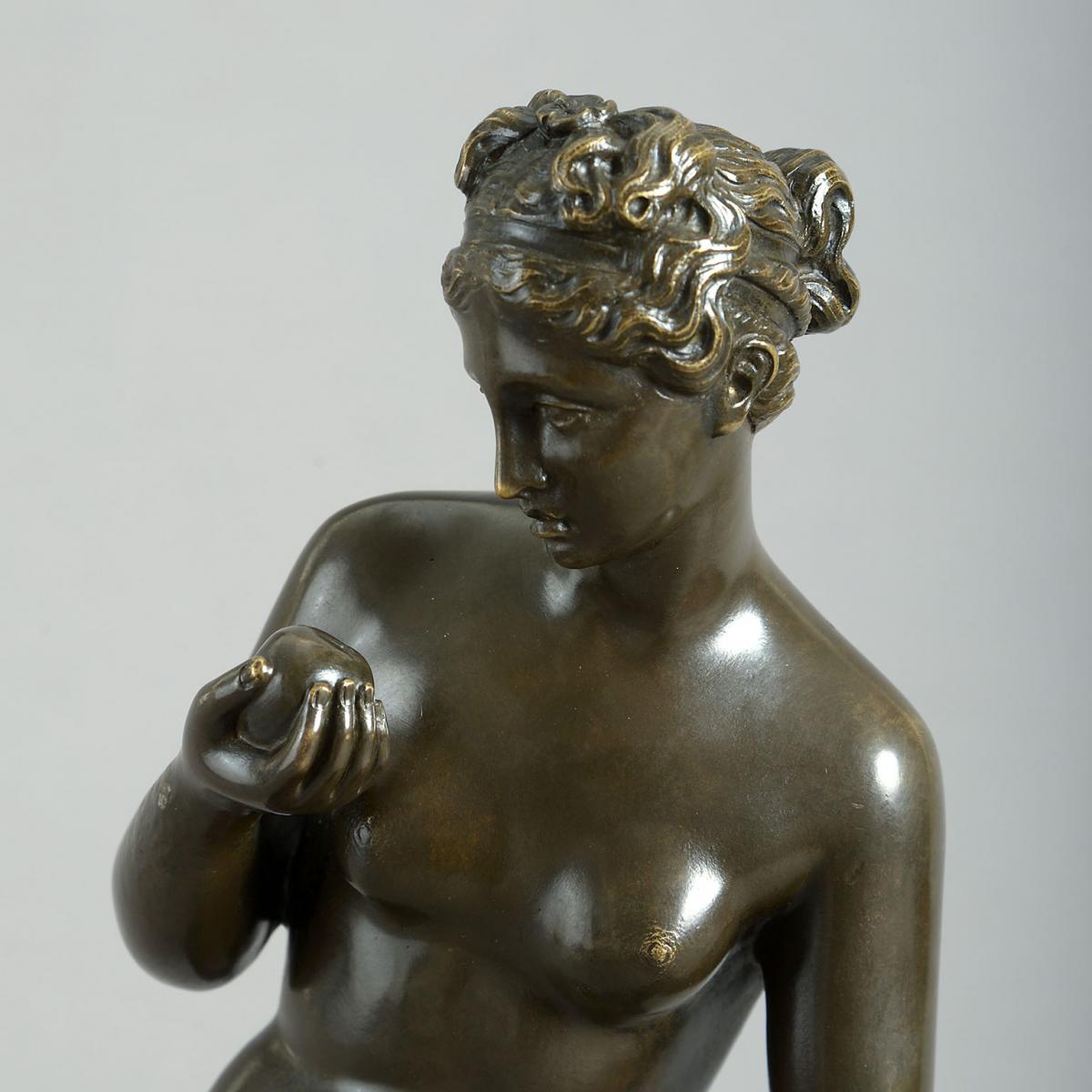 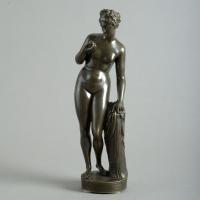 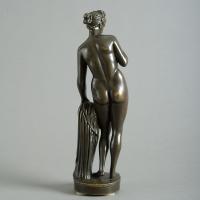 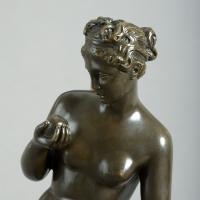 The figure is a bronze version of Thorvaldsen’s celebrated life-size marble sculpture, Aphrodite with the Apple, completed between 1813 and 1816, now in the Thorvaldsen Museum, Copenhagen (inv. no. A853).

The subject is associated with the notorious ‘Judgement of Paris’ , alluded to in Homer (Iliad, 25. 25-30) and Ovid (Heroides, 16. 71, 149-52). The key elements of the myth are well known. The goddess Eris, goddess of discord, had not been invited to a banquet that Zeus (Jupiter) had hosted to celebrate the marriage of Peleus and Thetis (whence would come their son, Achilles). To avenge herself for this slight, she appeared at the celebrations bearing a golden apple ¾ the ‘apple of discord’ ¾ which she threw before the diners as a prize for the most beautiful of the goddesses present. After three goddesses in attendance ¾ Hera (Juno), Athena (Minerva) and Aphrodite (Venus) ¾ all claimed the apple as the due of their beauty, Zeus deputed the task of judging between them to the Trojan mortal, Paris. To decide the question, each of the goddesses appeared naked before Paris, but they also offered bribes to sway his decision. It was Aphrodite’s offer of the most beautiful of mortal women ¾ Helen, wife of the Spartan King Menelaus ¾ that prevailed. Aphrodite duly received the apple from Paris. Paris’s subsequent abduction of Helen and their escape to Troy provided the casus belli for the Trojan Wars, as the cuckolded Spartan king and his Greek allies sought to retrieve Helen and avenge Paris’s crime.

Thorvaldsen’s statue captures the moment at which Aphrodite has just been presented with the apple by Paris. With one hand, she raises the apple to look more closely at her prize; with the other she takes up the robe she had earlier discarded to reveal her nakedness to her mortal judge.

Thorvaldsen’s treatment of the subject is heavily reliant on the antique exemplar of the Colonna Venus, a Roman marble copy of Praxiteles’ Aphrodite of Knidos, now in the Pio-Clementino Museum, Rome.

Bronze versions of Thorvaldsen’s figure are rare. Another figure after Thorvaldsen’s exemplar is the gilt-bronze version by Pietro Galli and Wilhelm Hopfgarten, in the Royal Danish Collection, Amalienborg Palace, Copenhagen, inv. nos. 20-79.