Twelve Antique Silver Tudor Apostle Spoons The Gift of Charles II - 1524 and 1553 - The Most important Early Silver To Be Sold This Century-The Swaythling Apostle Spoons. 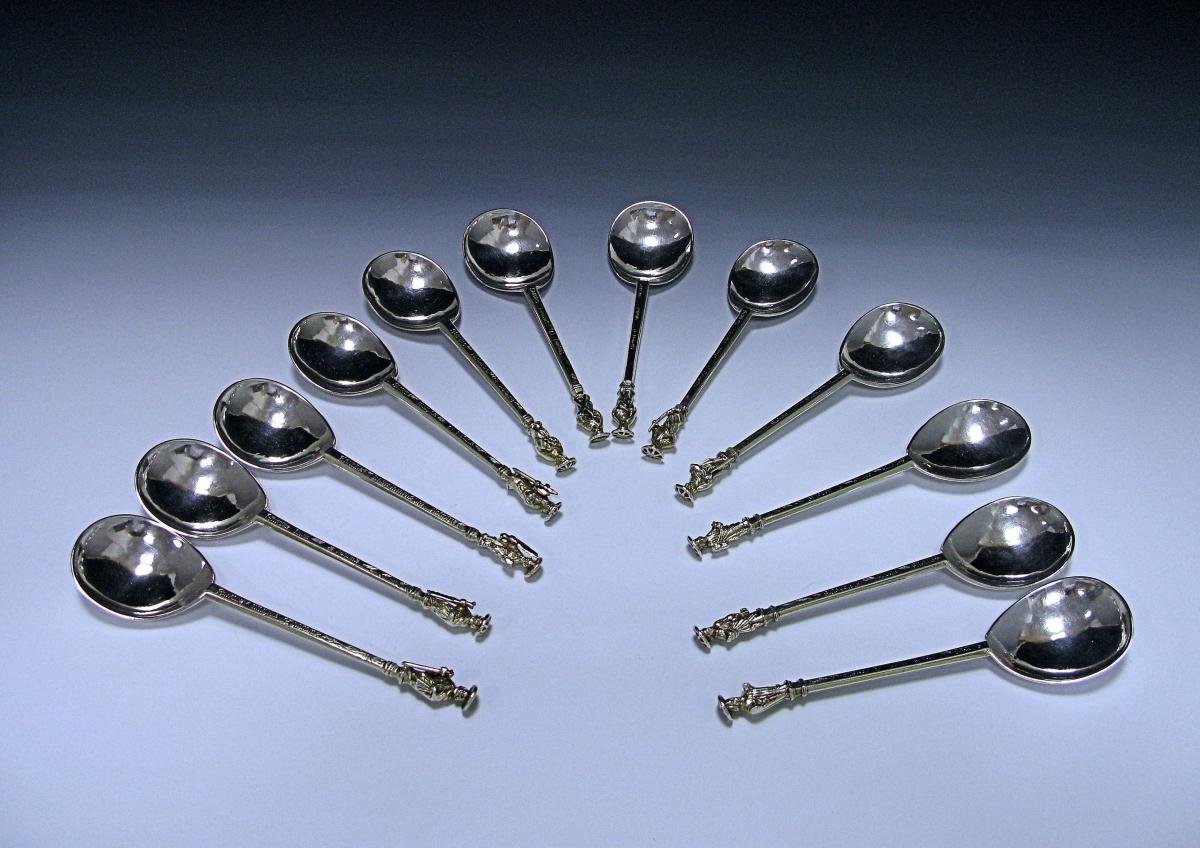 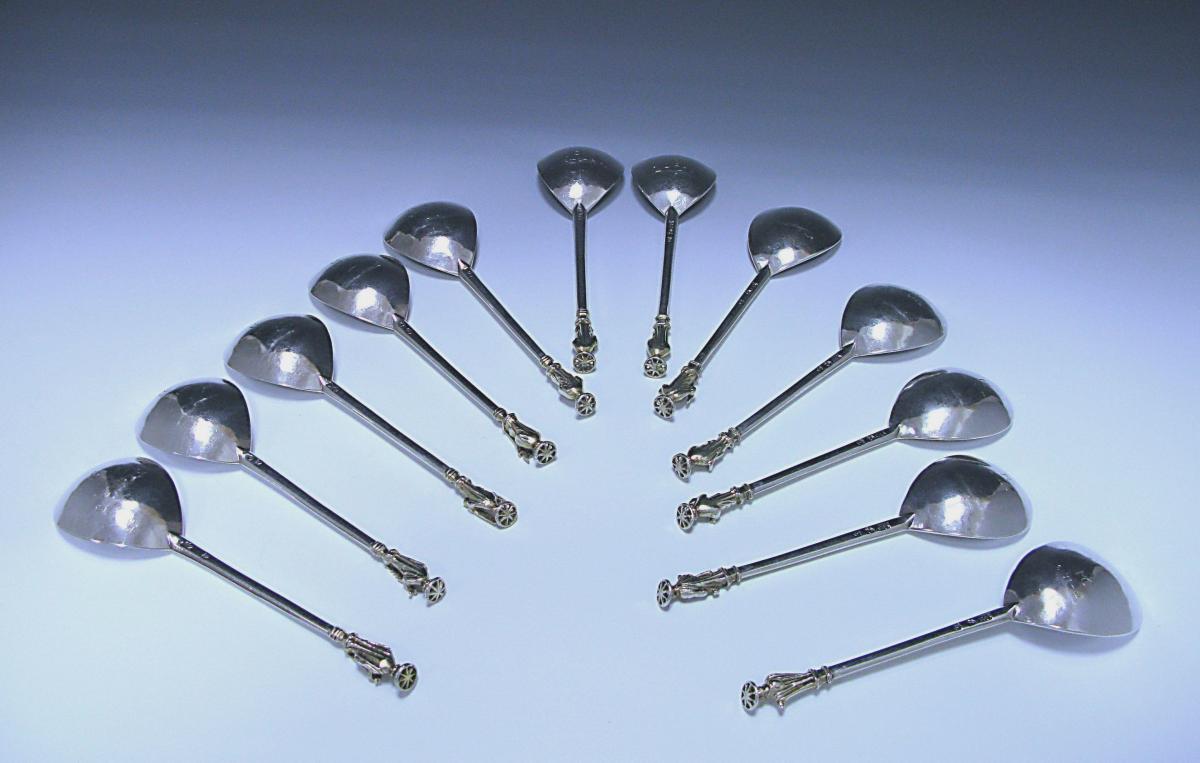 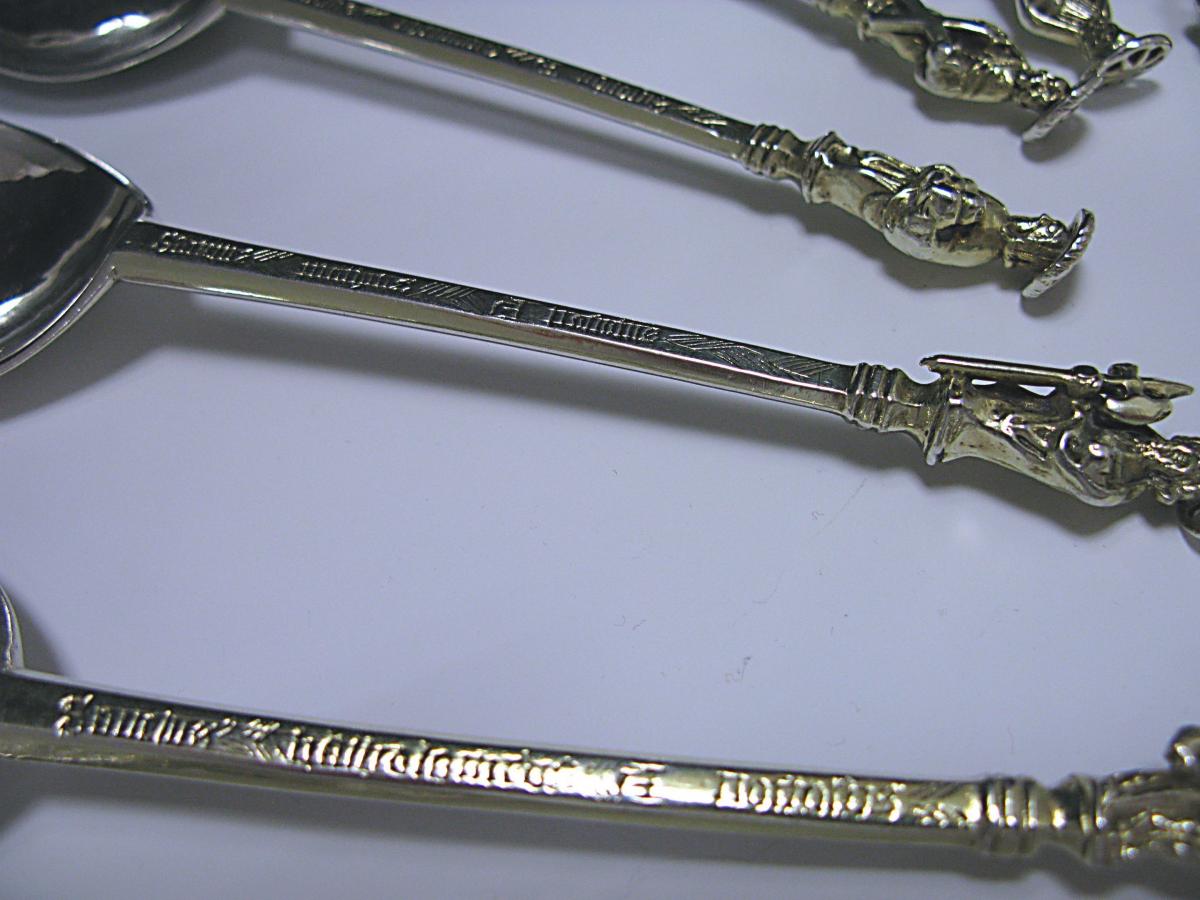 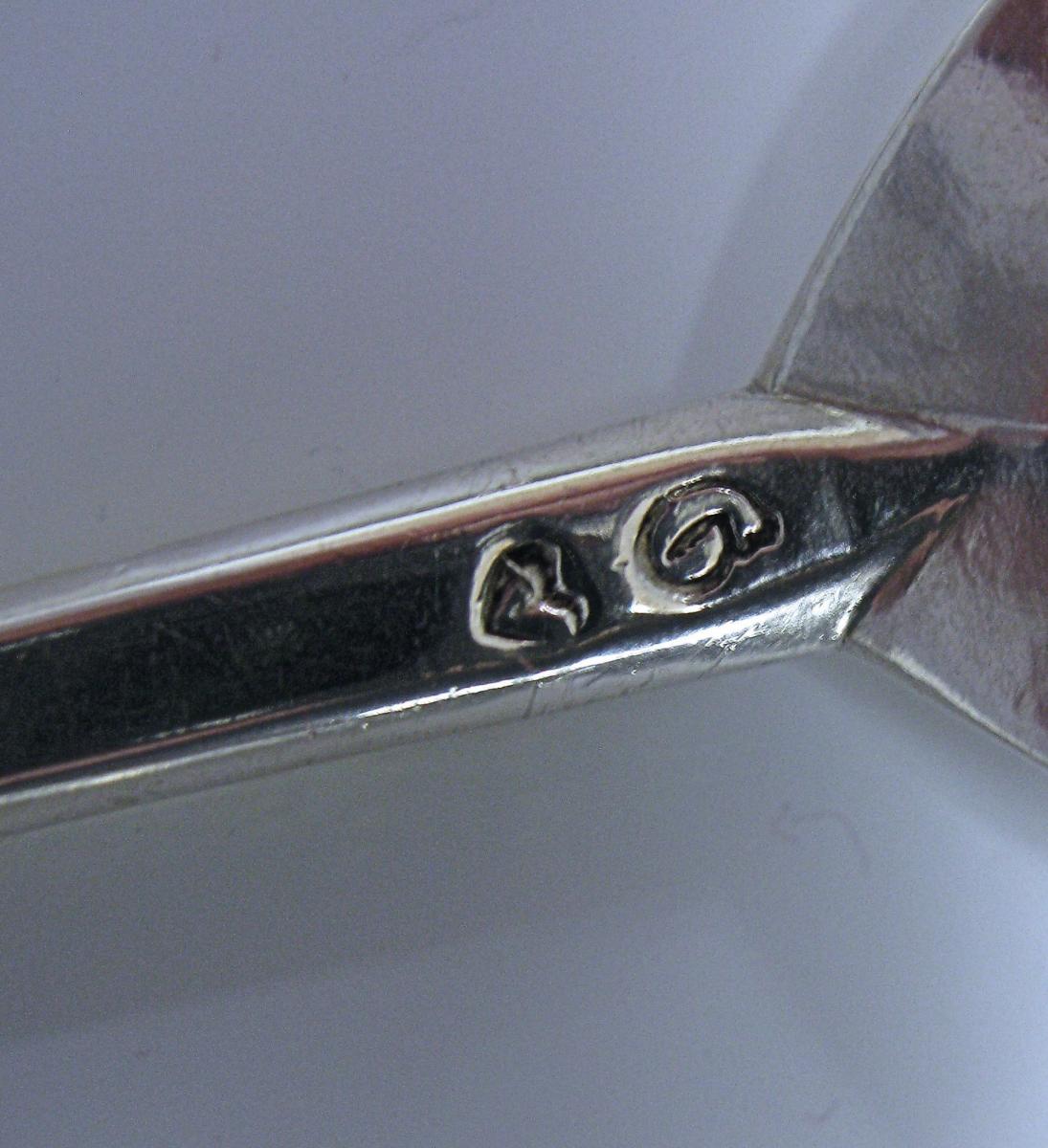 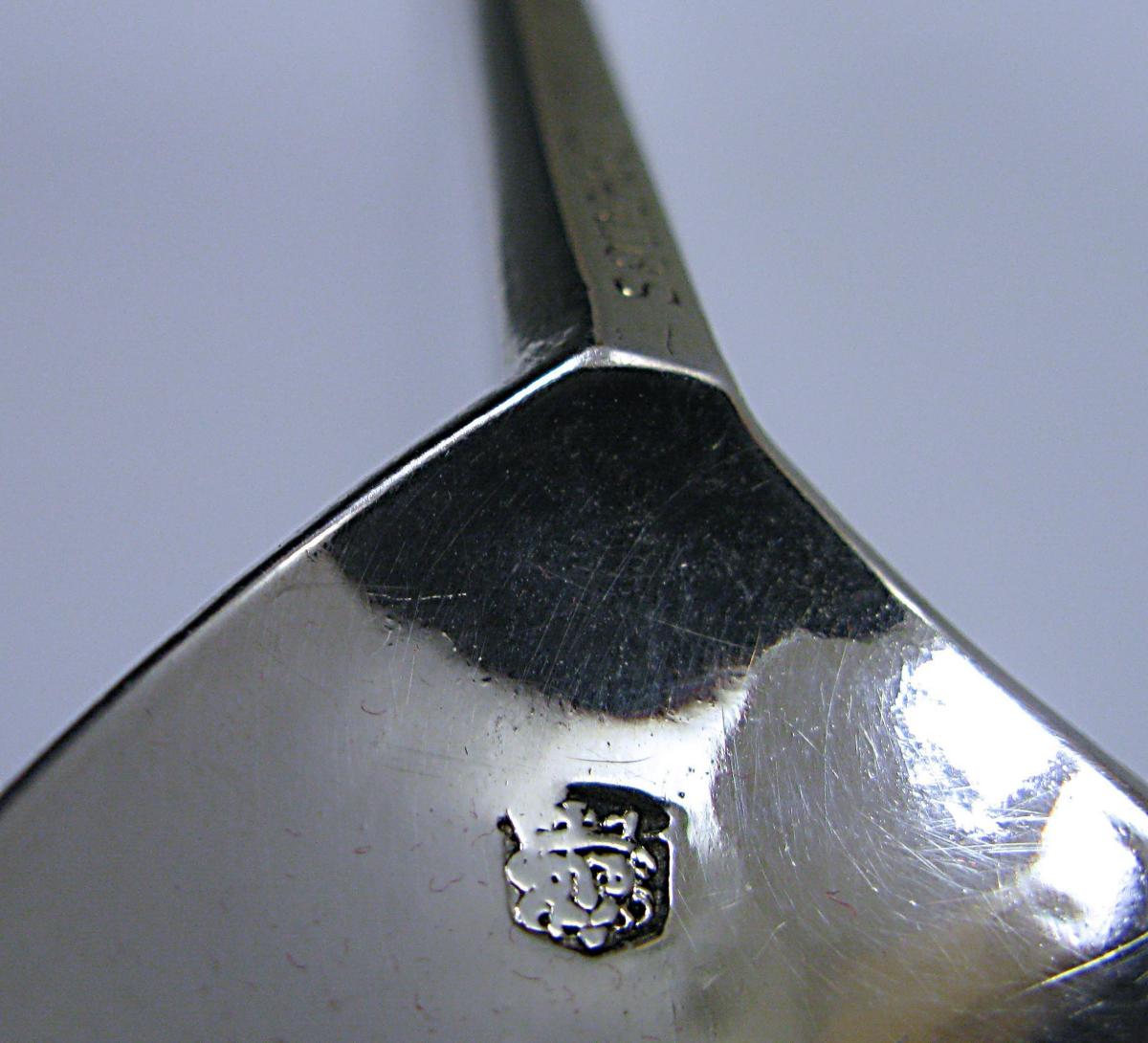 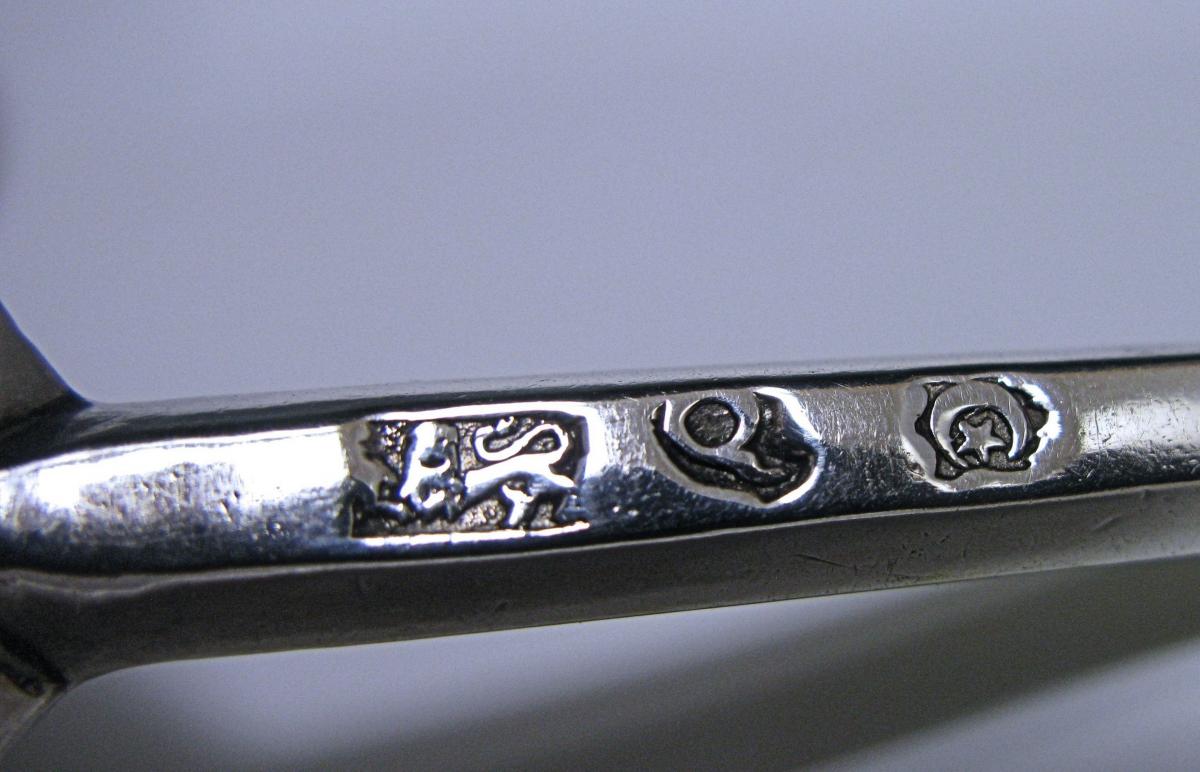 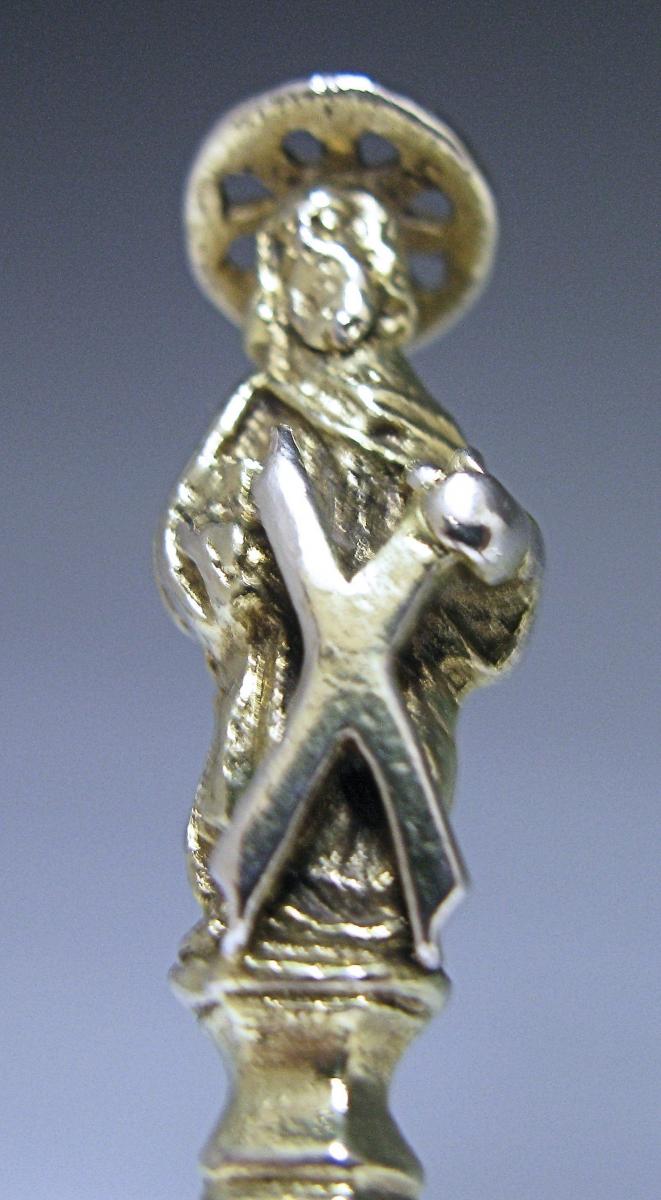 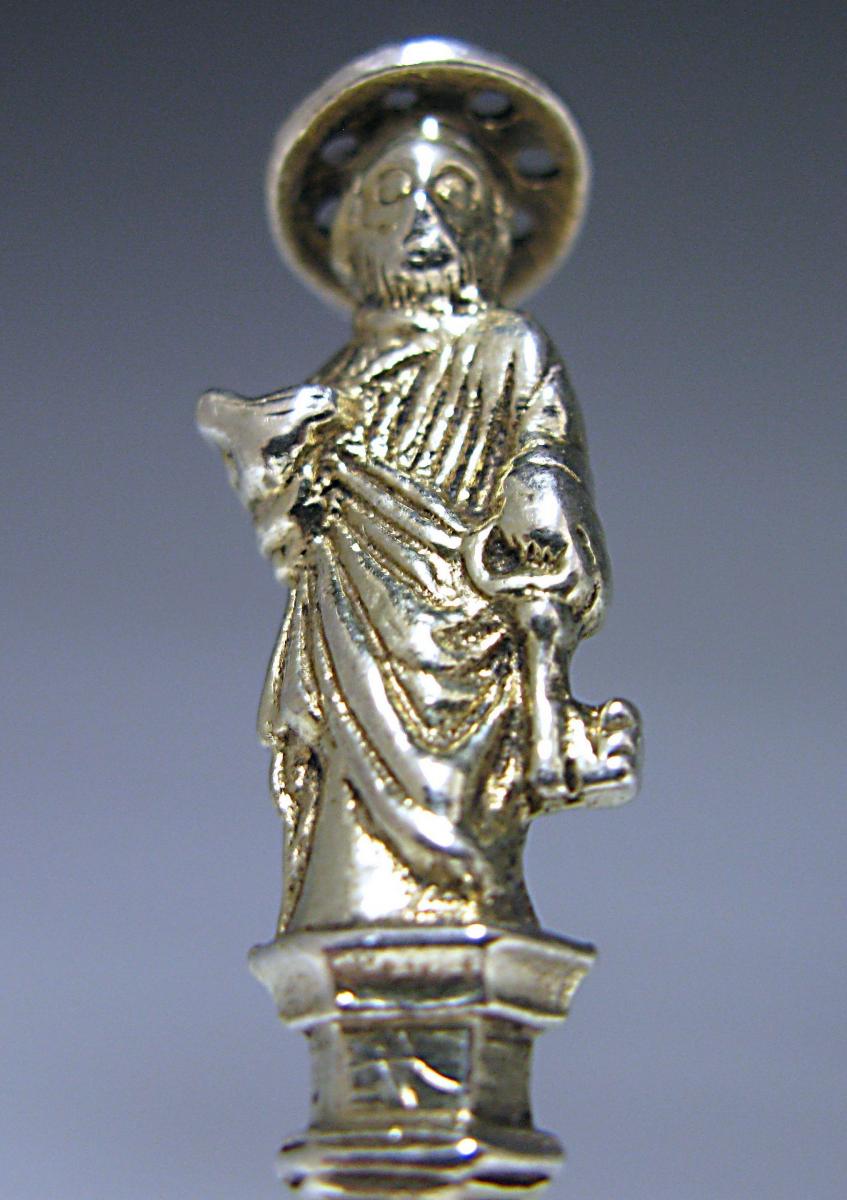 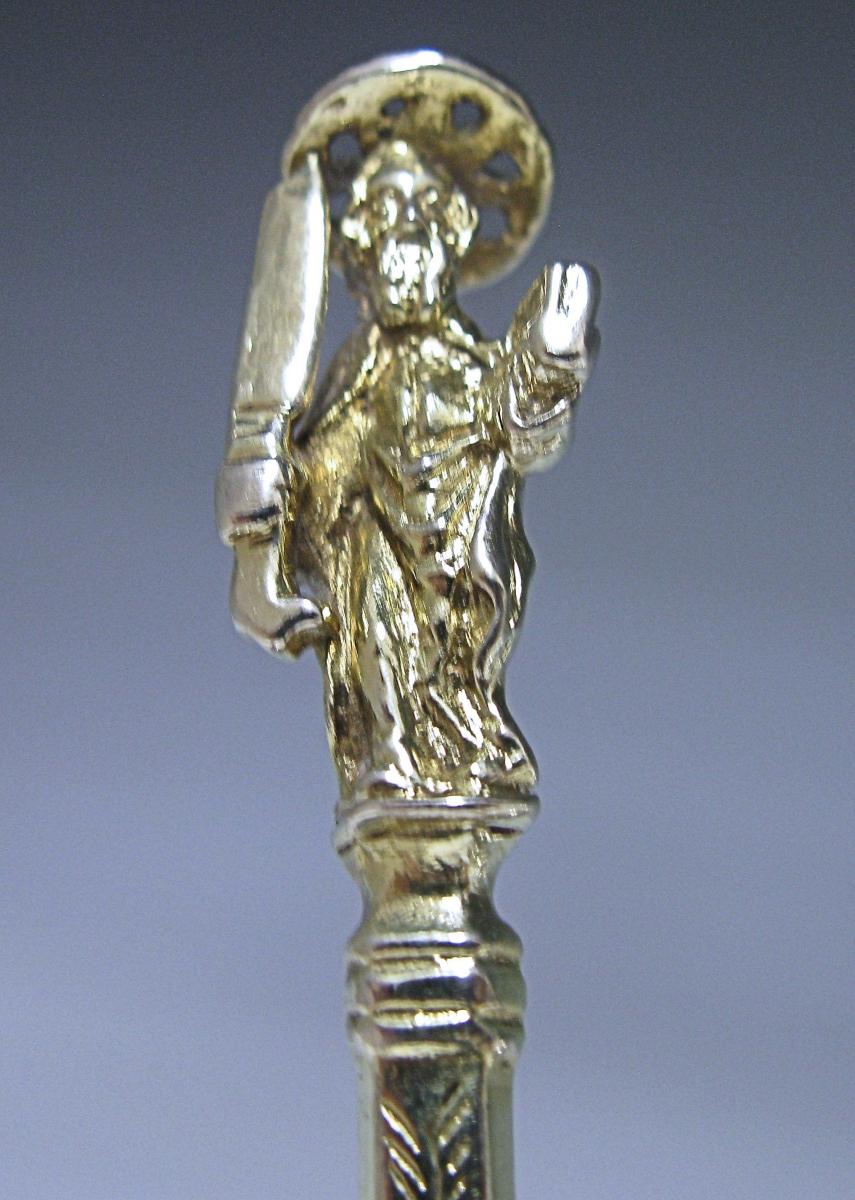 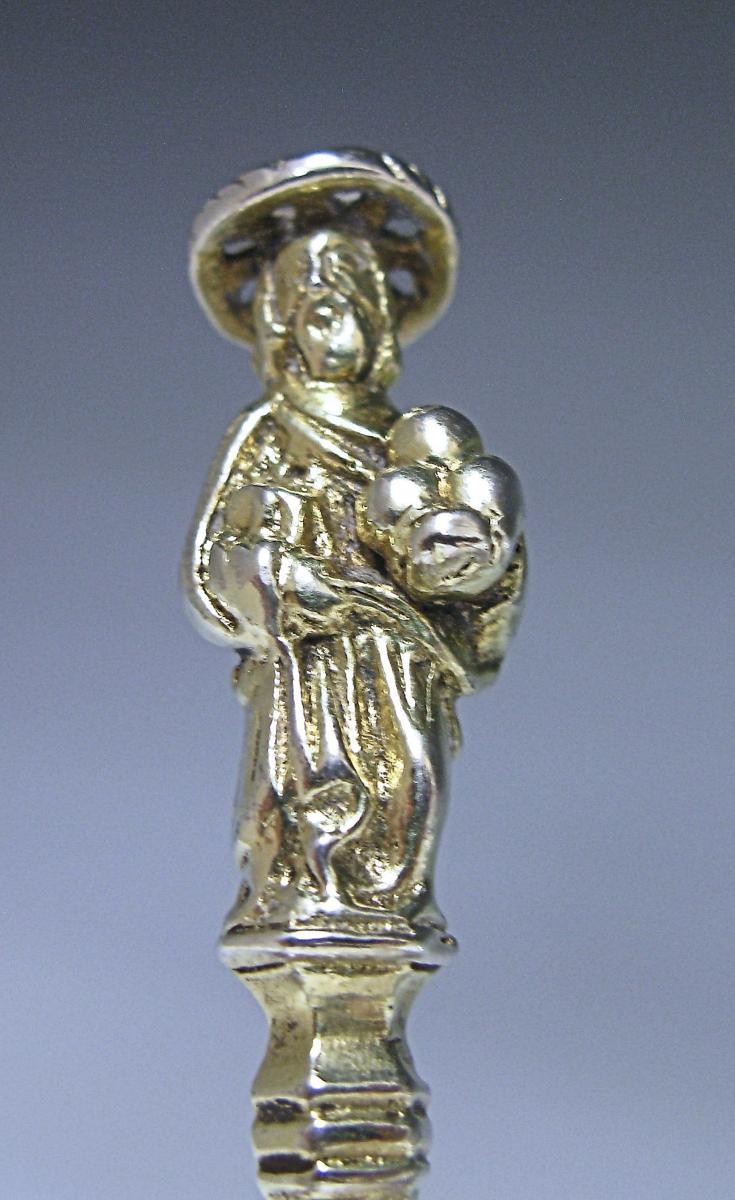 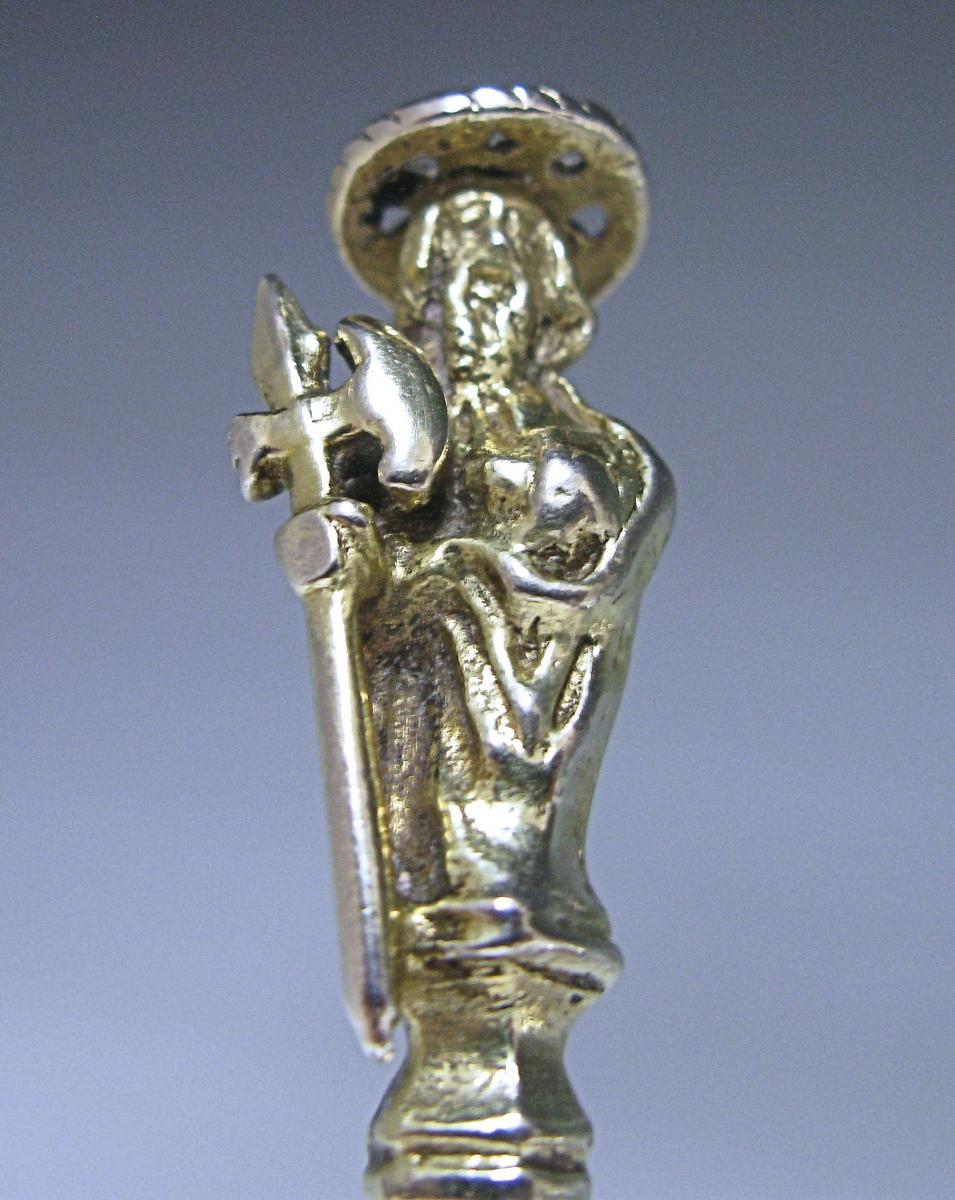 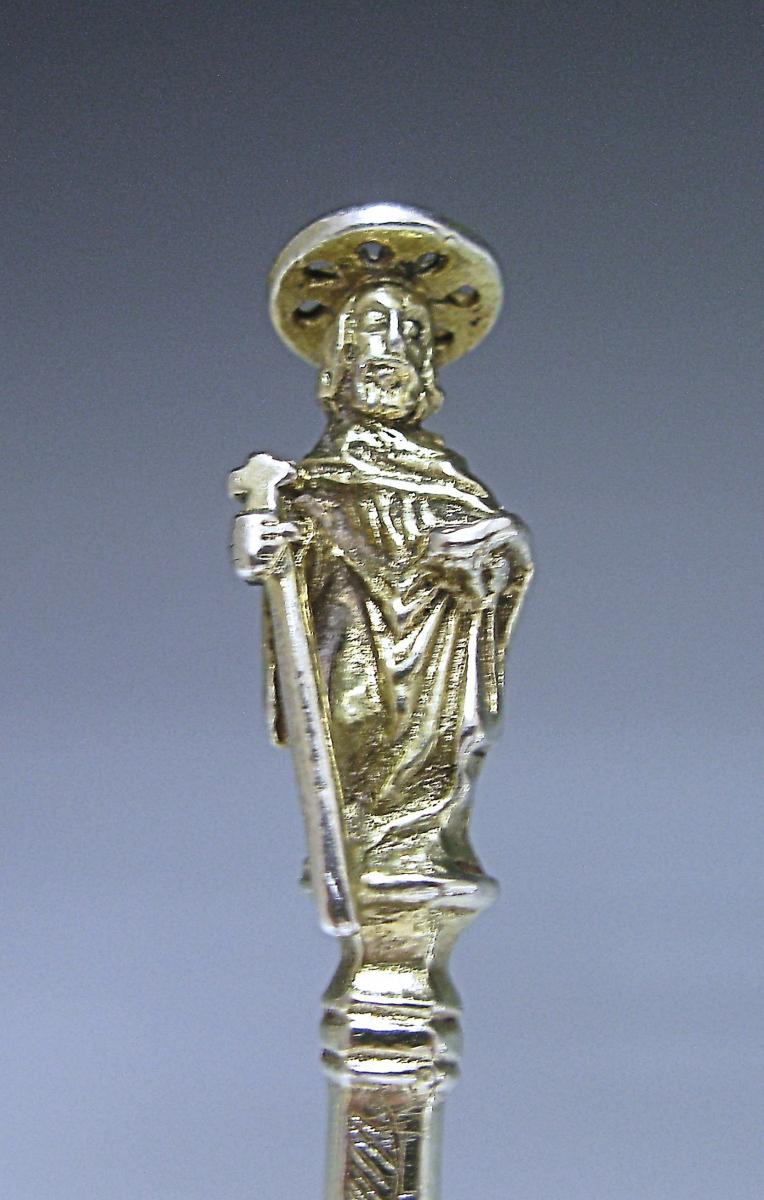 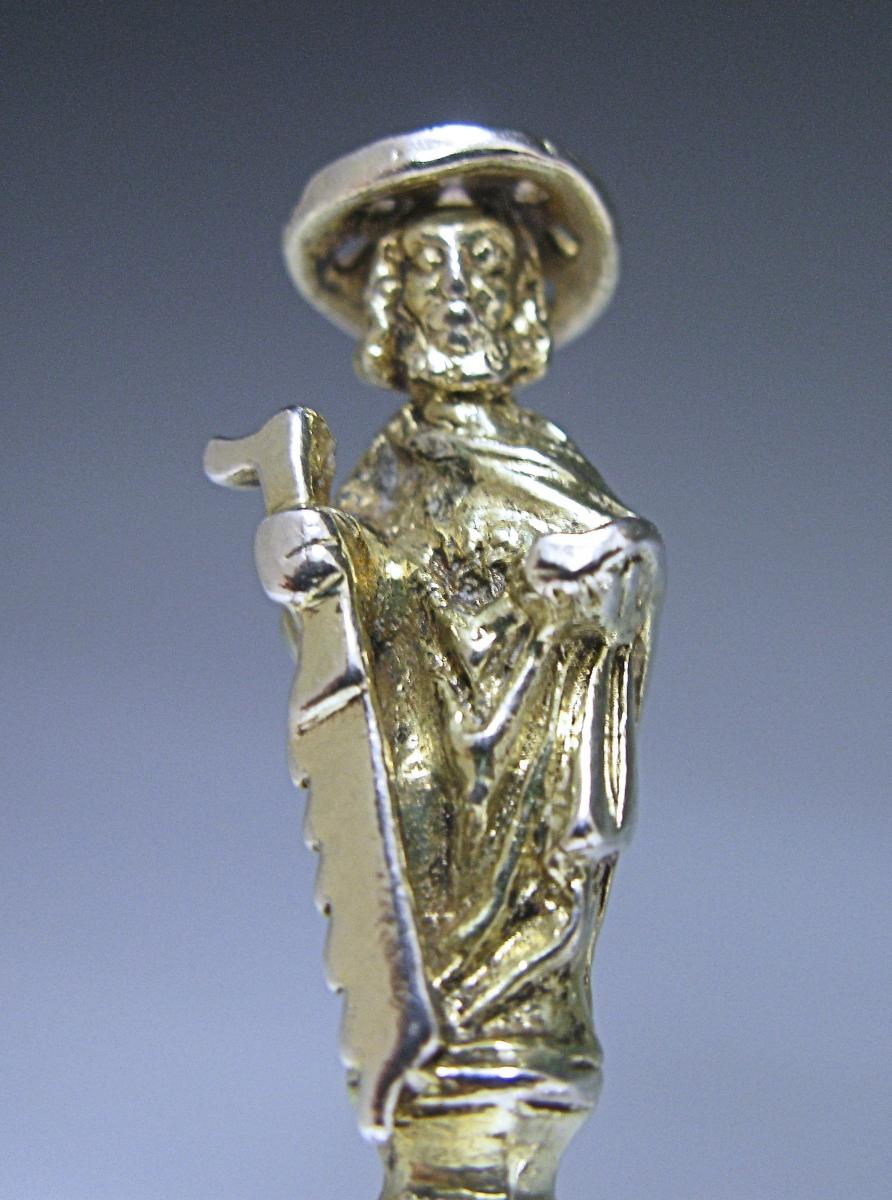 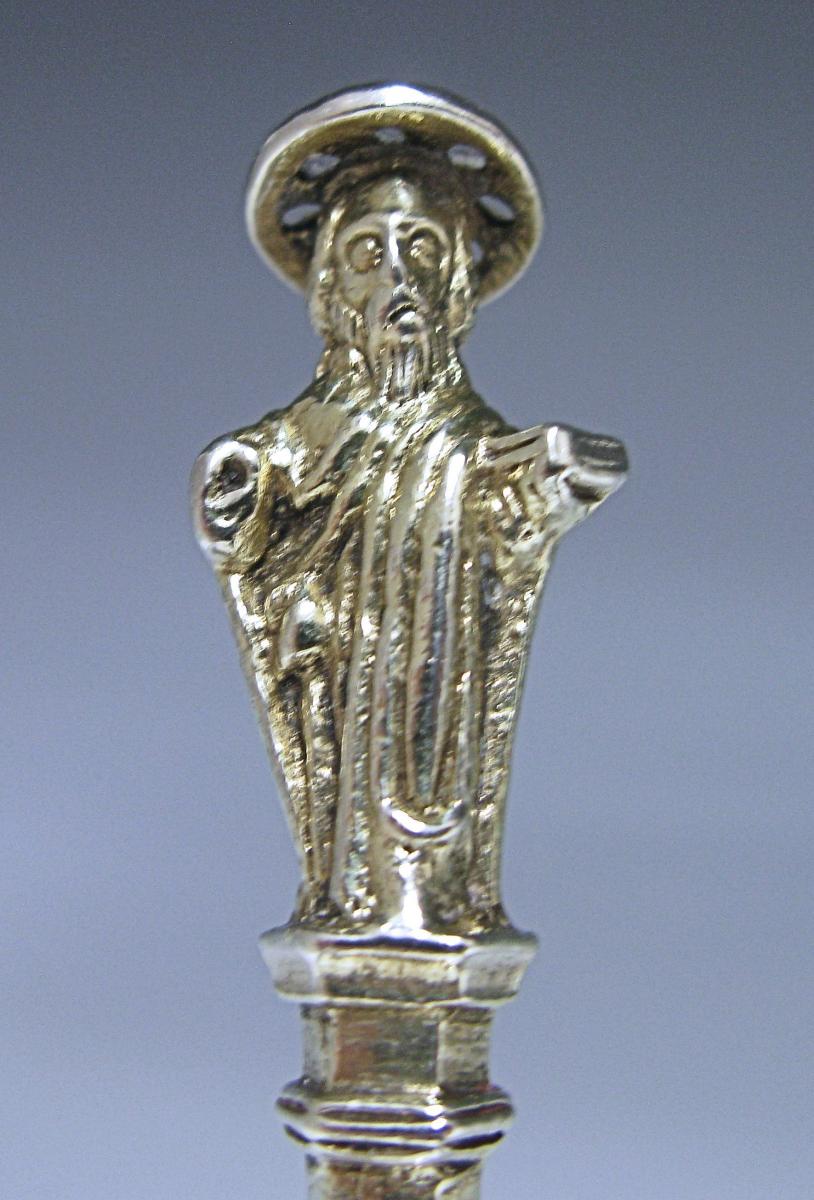 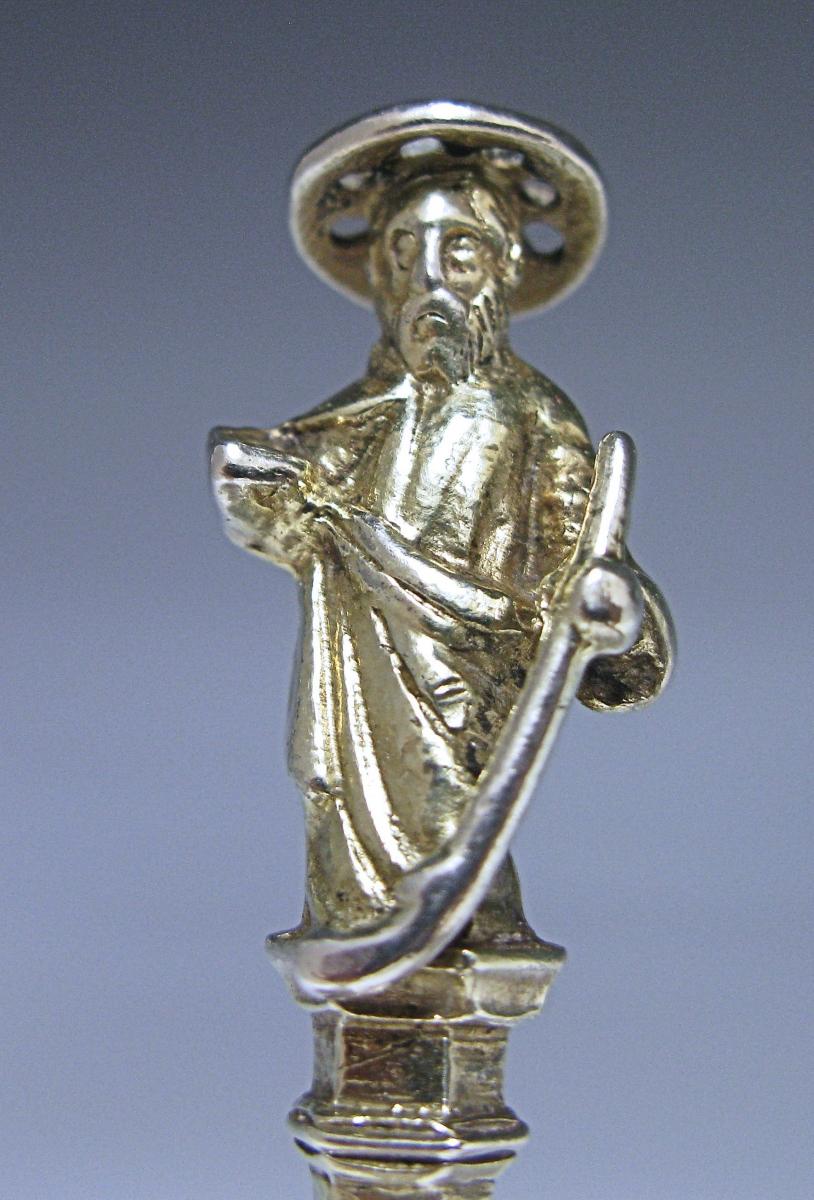 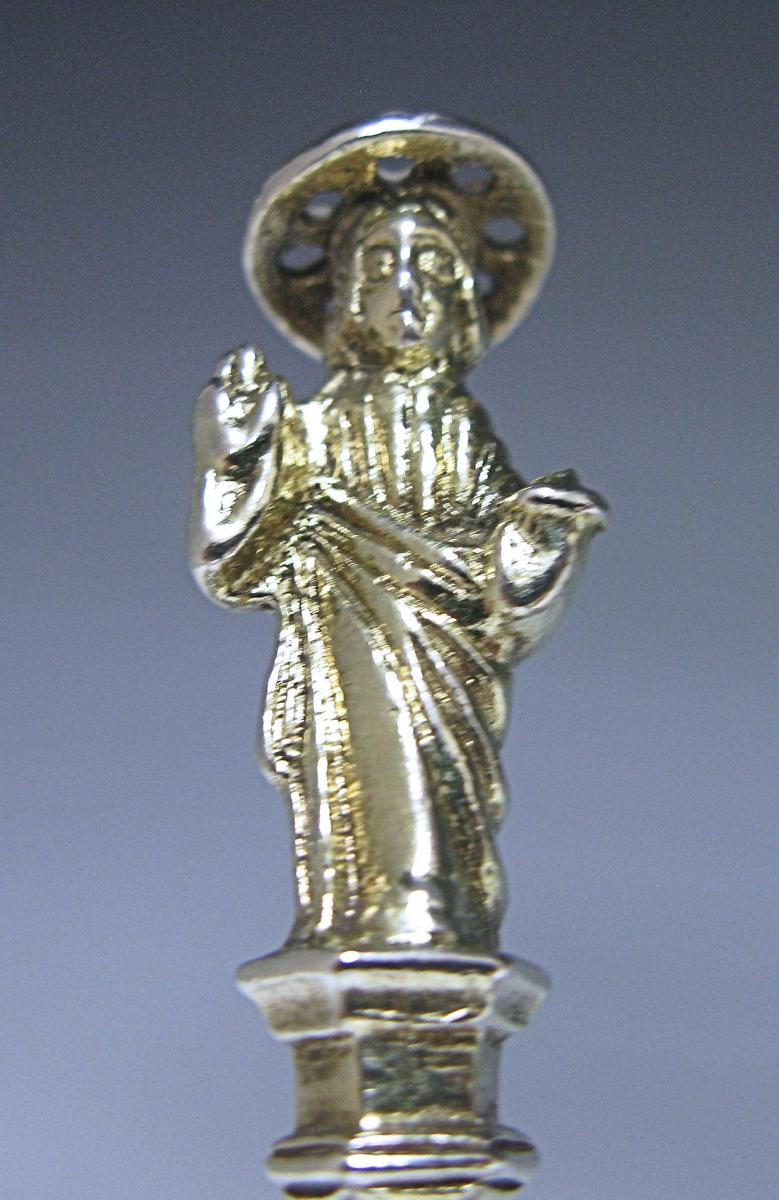 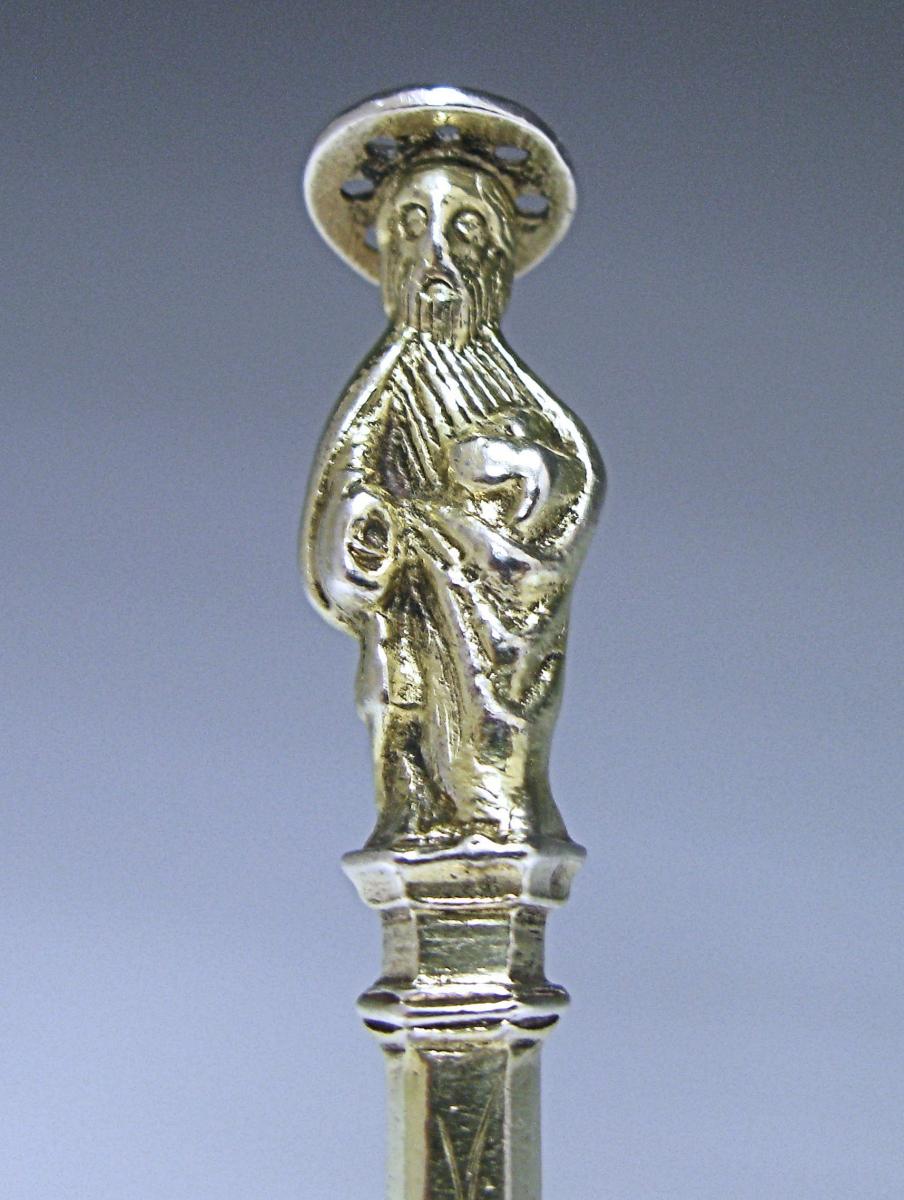 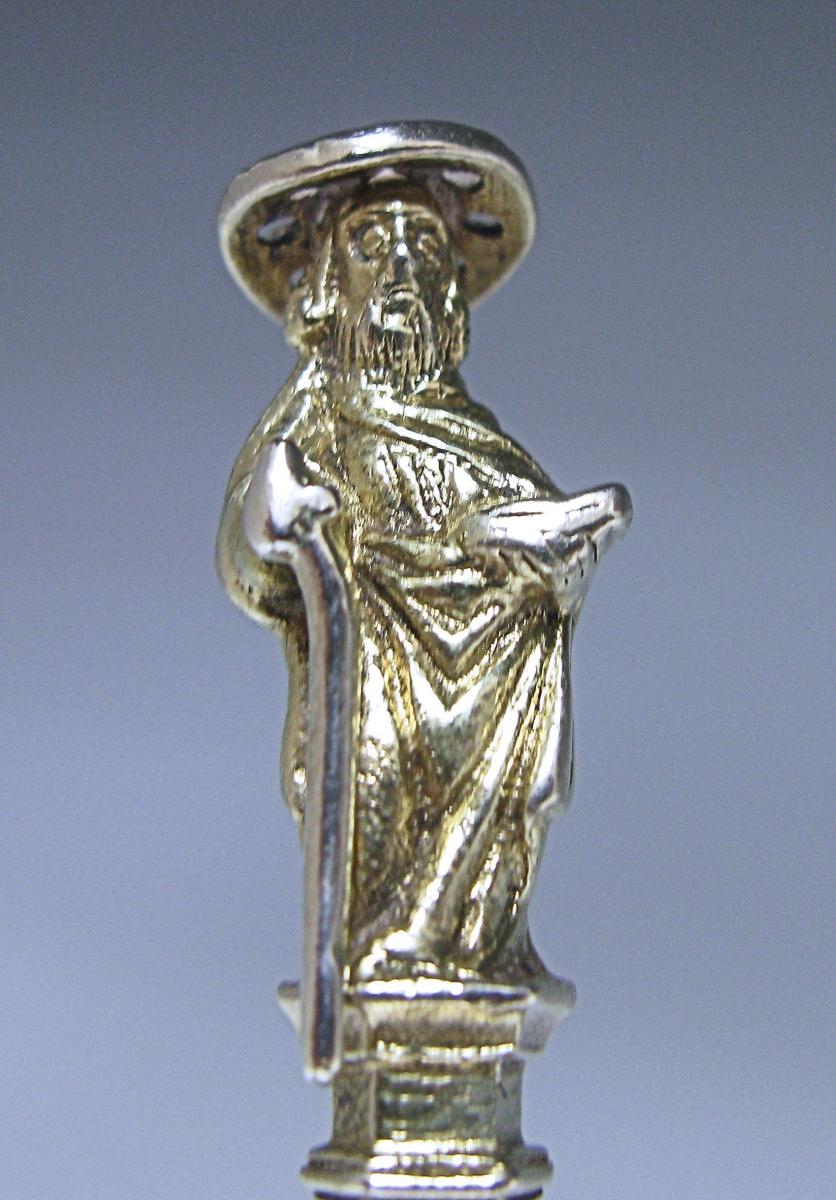 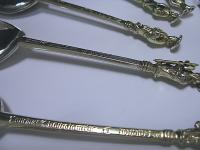 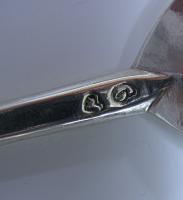 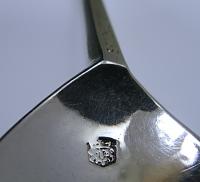 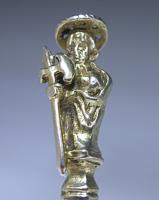 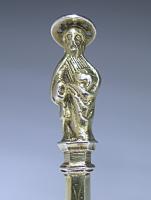 Of historic importance, the finest set of fully hallmarked Tudor period apostle spoons remaining in private hands and also the only ones!The only other Tudor set of apostle spoons sold in the last 100 years are the Astor set of 1536 which were sold 40 years ago and are now in the British Museum.The most significant Tudor period silver of any type to appear on the world market this century the magnificent Swaythling set is comprised of six Henry VIII and six Mary I parcel-gilt apostle spoons. To place the spoons in a historical context, the reign of Henry VIII was from 21st April 1509 till his death on 28th January 1547. Queen Mary I lasted just five tumultuous years during which time she was known for her brutal persecution of Protestants and gave rise to her sobriquet – Bloody Mary. She was the daughter of Henry VIII and his first wife Catherine of Aragon.She came to throne in 1553 following the death of her half-brother Edward VI and the nine day reign of Lady Jane Grey.

The Spoons are believed to have been presented by Charles II to Martha Clayton, the wife of Sir Robert Clayton , Lord Mayor of London who was later director of the Bank of England . In the London Gazette it is reported that “ on Tuesday the 9th of March , 1679-80, King Charles II and the Duke of York did Sir Robert Clayton, then Lord Mayor , the honour to sup with him at house in the Old Jewry”. In the History of Parliament it is written “ The house he built for himself in Old Jewry had a banqueting hall more splendid than anything in the royal palaces, and as sheriff he entertained the King and most of the nobility there. Evelyn wrote of him as ‘this prince of citizens, there never having been any, who, for the stateliness of his palace, prodigious feasting, and magnificence exceeded him’

Price on application and Viewing by appointment only

This Magnificent set of 12 Apostle Spoons , were first sold , on 28 March 1892 by Christie’s of London and have since been known as the Swaythling Set when they passed into the collection of the famous British banker Samuel Montagu - Baron Swaythling -Sir Robert Montagus’interest apart from the magnificence and rarity of the spoons would also have been spiked by the fact that Sir Robert Clayton is often known as the father of British deposit banking and was later director of the Bank of England in 1702.Sir Robert Clayton with his partner John Morris (1625-1683)first lent money to private landowners who were driven by the civil war of the 1640s to seek credit in London.
These are fully documented in Commander How’s reference book on Early English Spoons and each spoon is in superb condition. Finding pre Elizabethan Hallmarked silver is of extreme rarity and these spoons are almost certainly the finest remaining objects remaining for purchase .

Born? London, c1470: Died London in 1532.
Amadas was trained as a goldsmith by his father. He was a lowys of the Goldsmiths' Company in 1492, and 'fully sworn to the Company in 1494'. In 1503 he was admitted to the livery. He was one of the Company's Wardens in 1511 and 1515, and Prime Warden in 1524 and again in 1530. The last mention of him in the Company's records was on 15 January 1532 when his apprentice, Brian Berwycke, was sworn to the Company.
Amadas is said to have been the 'chief supplier of gold and silver to the King and his courtiers'; nu-merous entries in the State Papers record payment to him for gold and silver plate, including plate given by the King as New Year's gifts. In January 1532 the King's New Year's gift to Amadas was 36.75 ounces of plate, while Amadas in turn gave the King 'six sovereigns in a white paper'. It has been conjectured that Amadas marked his work as a goldsmith with a heart, a play on his name.
Amadas served as acting Master of the King's Jewel House as early as 1524, and on 20 April 1526 was formally appointed Master, an office which he retained until his death in April 1532, when he was succeeded by Thomas Cromwell. After Amadas' death, commissioners appointed to take an inventory of the King's jewels which had been in Amadas' custody. Two of the three books of inventory were signed by the King, and all three by Amadas' widow, Elizabeth.
At some time before 1526 Amadas was appointed one of the deputies to the Master of the Mint, William Blount, 4th Baron Mountjoy In 1526 the coinage was altered, and a new contract was entered into between Mountjoy and his two deputies, Robert Amadas and Ralph Rowlett, and Amadas’deputy, Martin Bowes. Shortly thereafter allegations were made of wrongdoing in the administration of the Mint, and in June 1527 a commission of inquiry was set up. The commission reported in February 1528, and was highly critical of Amadas and Rowlett. In 1530 Lord Mountjoy, disturbed by the declining revenues from the Mint, and suspecting corruption, instituted a lawsuit in the High Court of Chancery against his two deputies. Unfortunately, the outcome of the lawsuit is unknown; however, in December 1530 Mountjoy appointed a new deputy for the Mint, the London goldsmith Hugh Welshe or Walshe, who had been one of the members of the commission which had earlier been critical of the work of Amadas and Rowlett.
Amadas refused election as Sheriff of London in 1531. He made his will on 3 July 1531, requesting burial in his parish church of St Mary Woolnoth, and appointing his wife, Elizabeth, as his sole ex-ecutrix, and Thomas Howard, 3rd Duke of Norfolk, Sir Thomas More, and Richard Rich as overseers.He bequeathed the King a gold cup of £100 value. Among his other bequests was £5 to John Freeman, who had been apprenticed to him in 1507 and admitted to the livery in 1528. The will was proved 28 November 1533. His stock was inventoried after his death and put up for sale.

Nicholas Bartholomew was one of the most important spoon makers of the period. - Nicholas Bar-tholomew - who is identified by the excellent "crescent enclosing a mullet" makers mark. This par-ticular mark was used as a workshop mark for a lengthy period during the 16th and early 17th cen-turies and passed from master to apprentice. The date letter has the distinctive cut out to the punch that differentiates it from the late Elizabethan letter "T" and the lion passant is within a diagnostic rectangular punch. There is also a good example of the leopards head crowned mark to the bowl.