A Transitional Style Sculptural Commode, After the Model by Charles Cressent 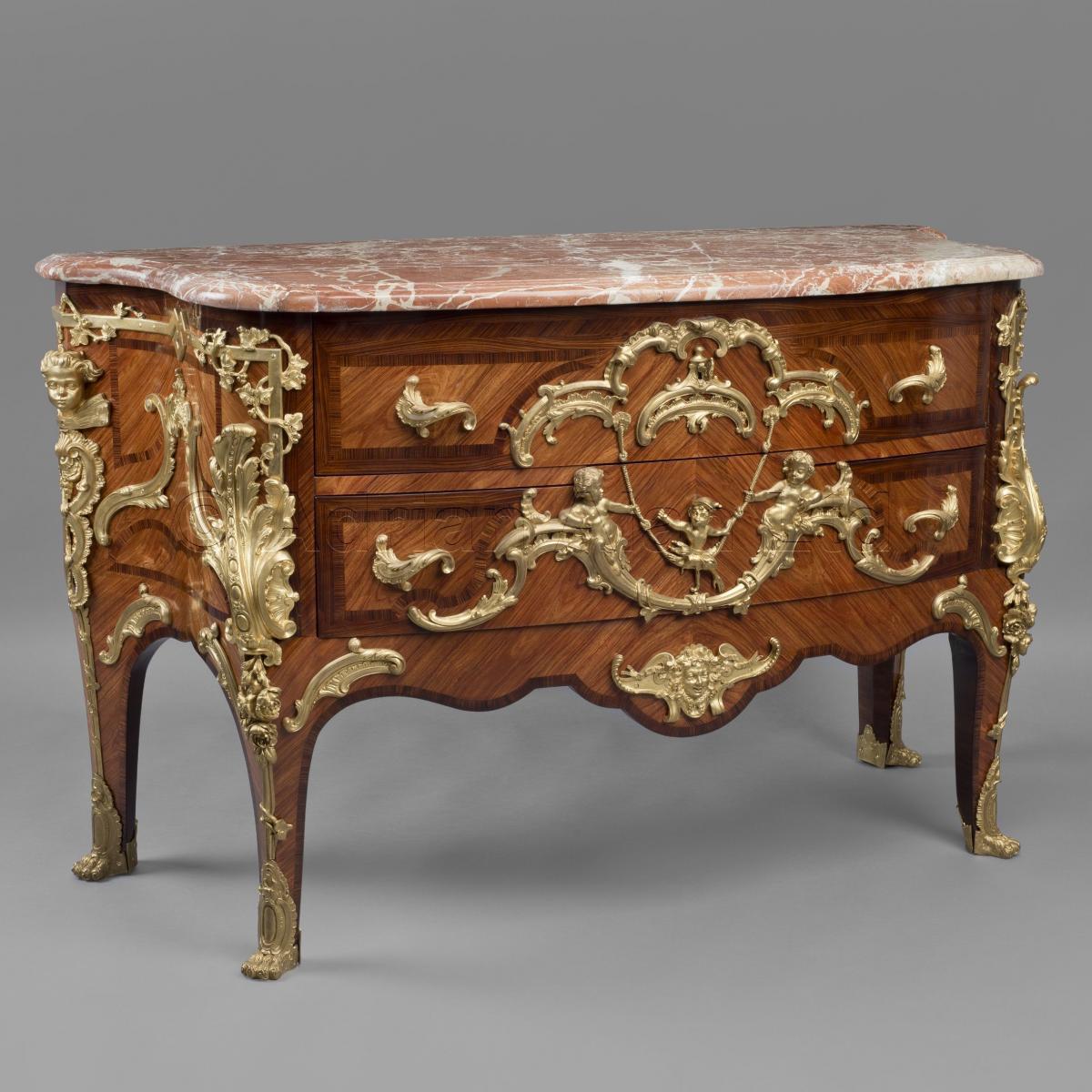 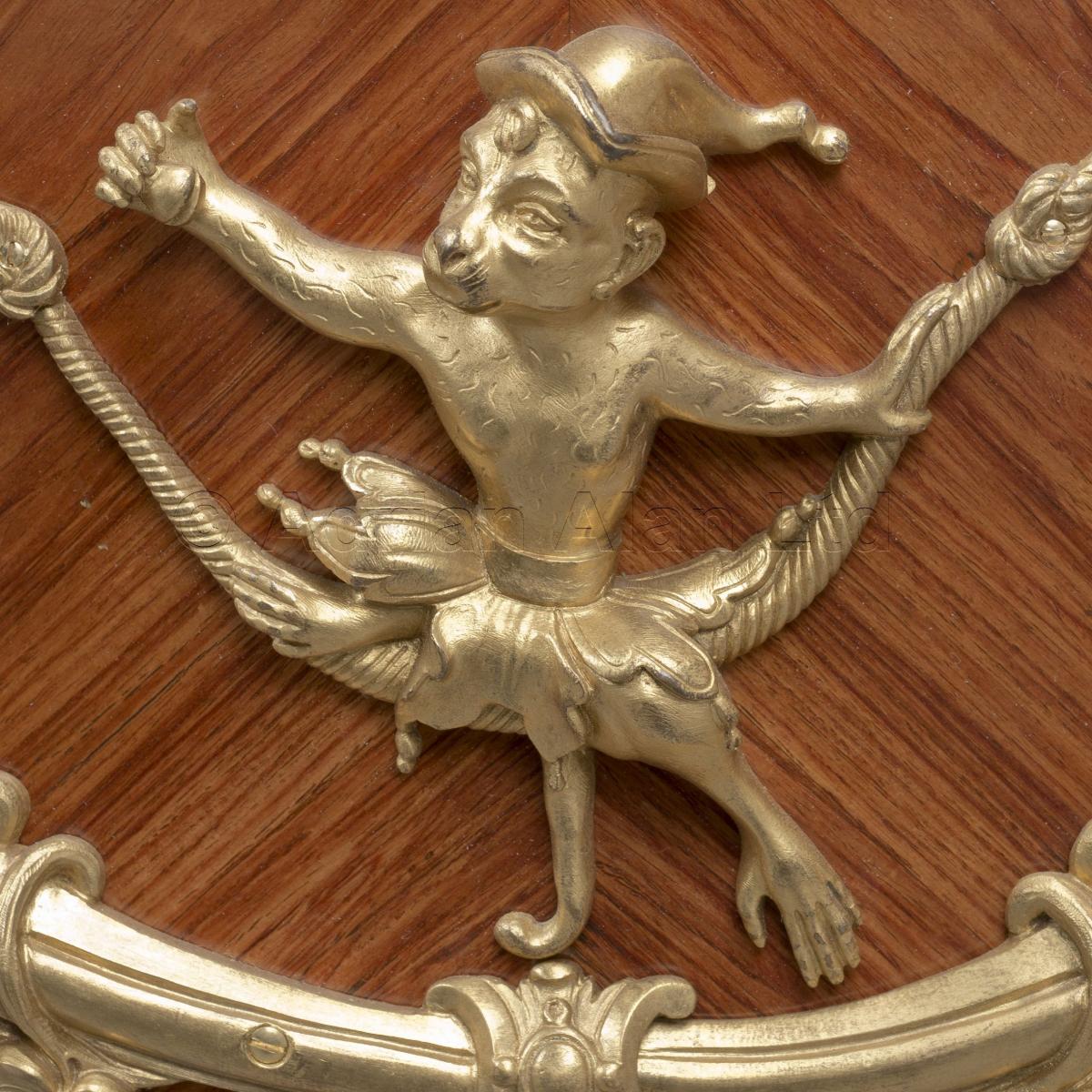 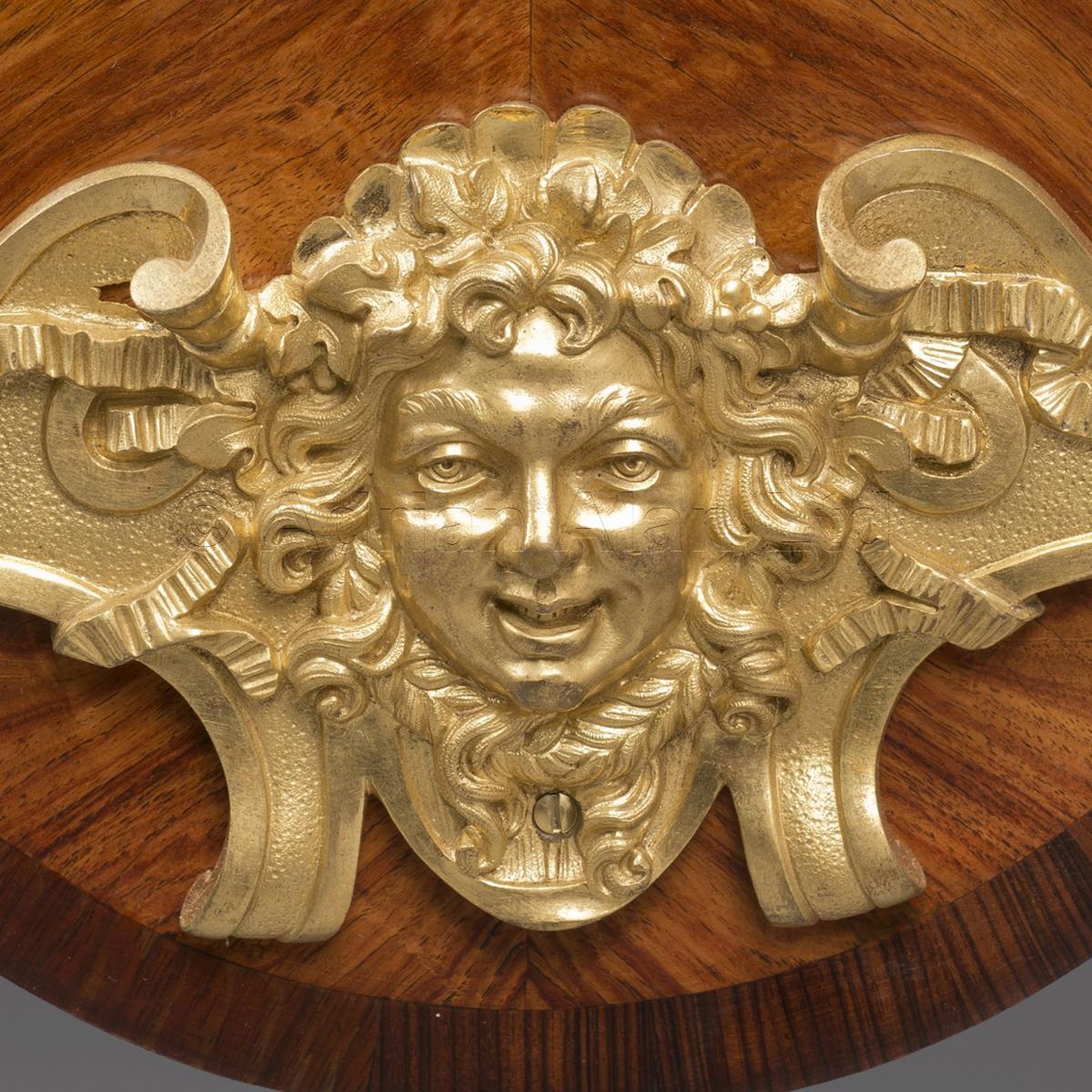 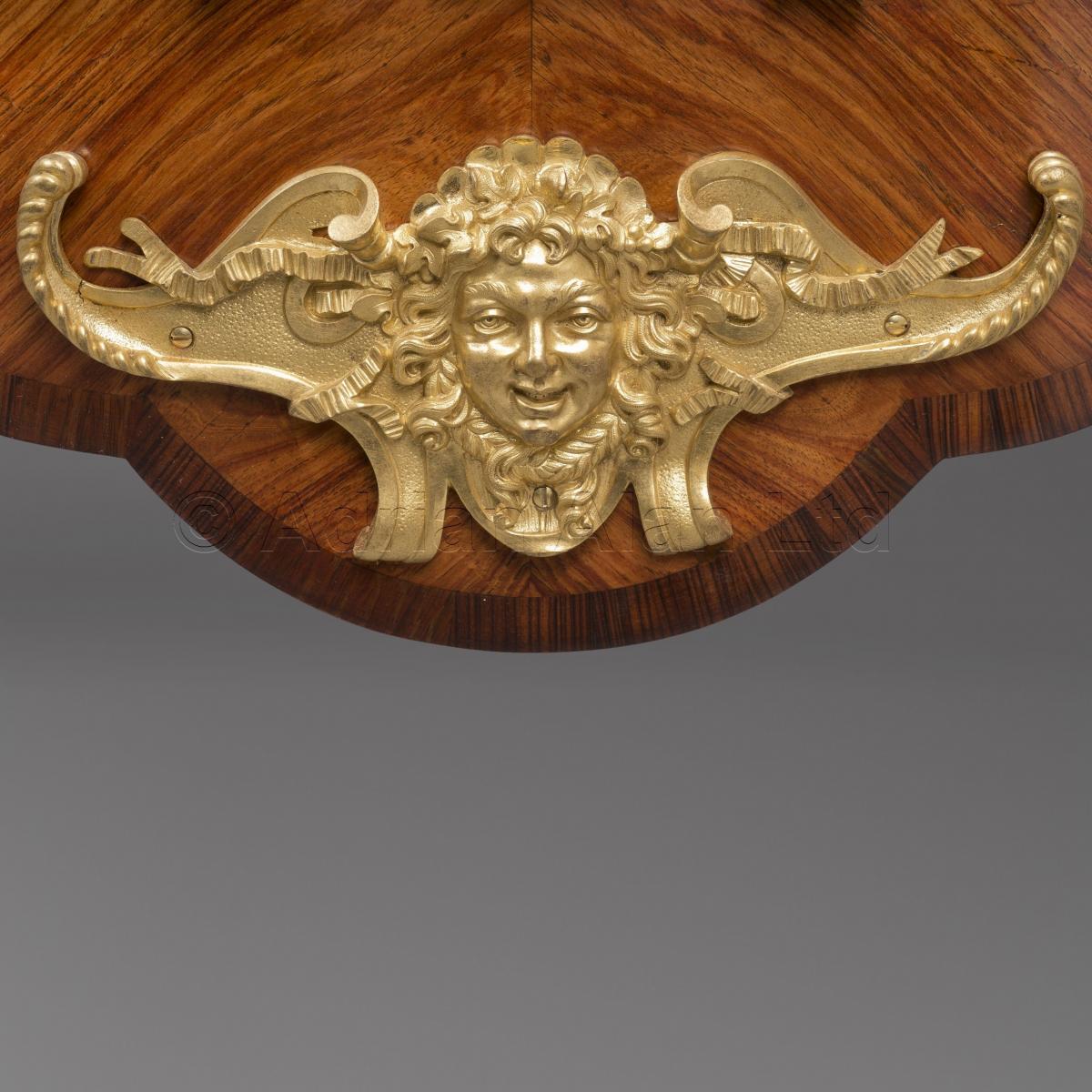 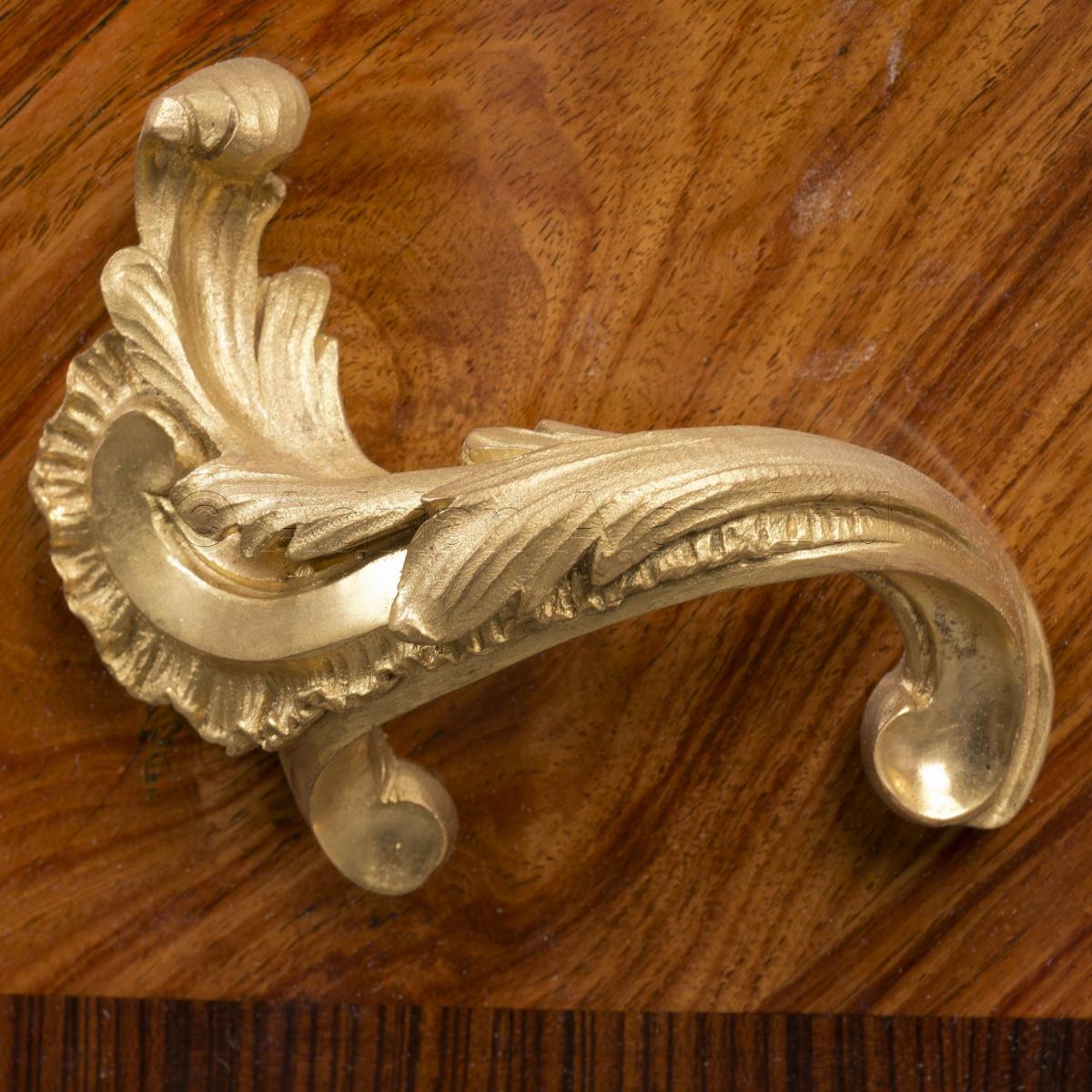 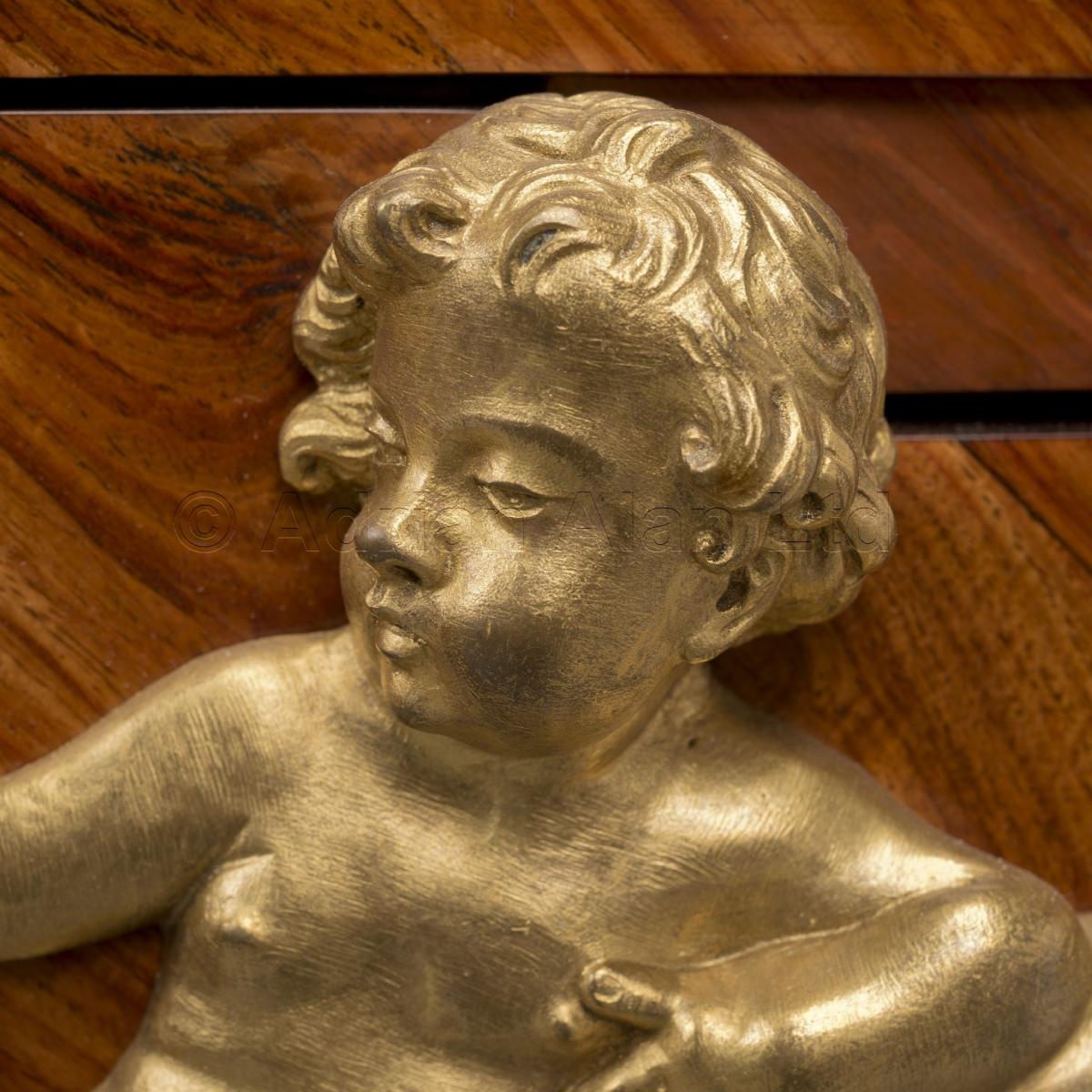 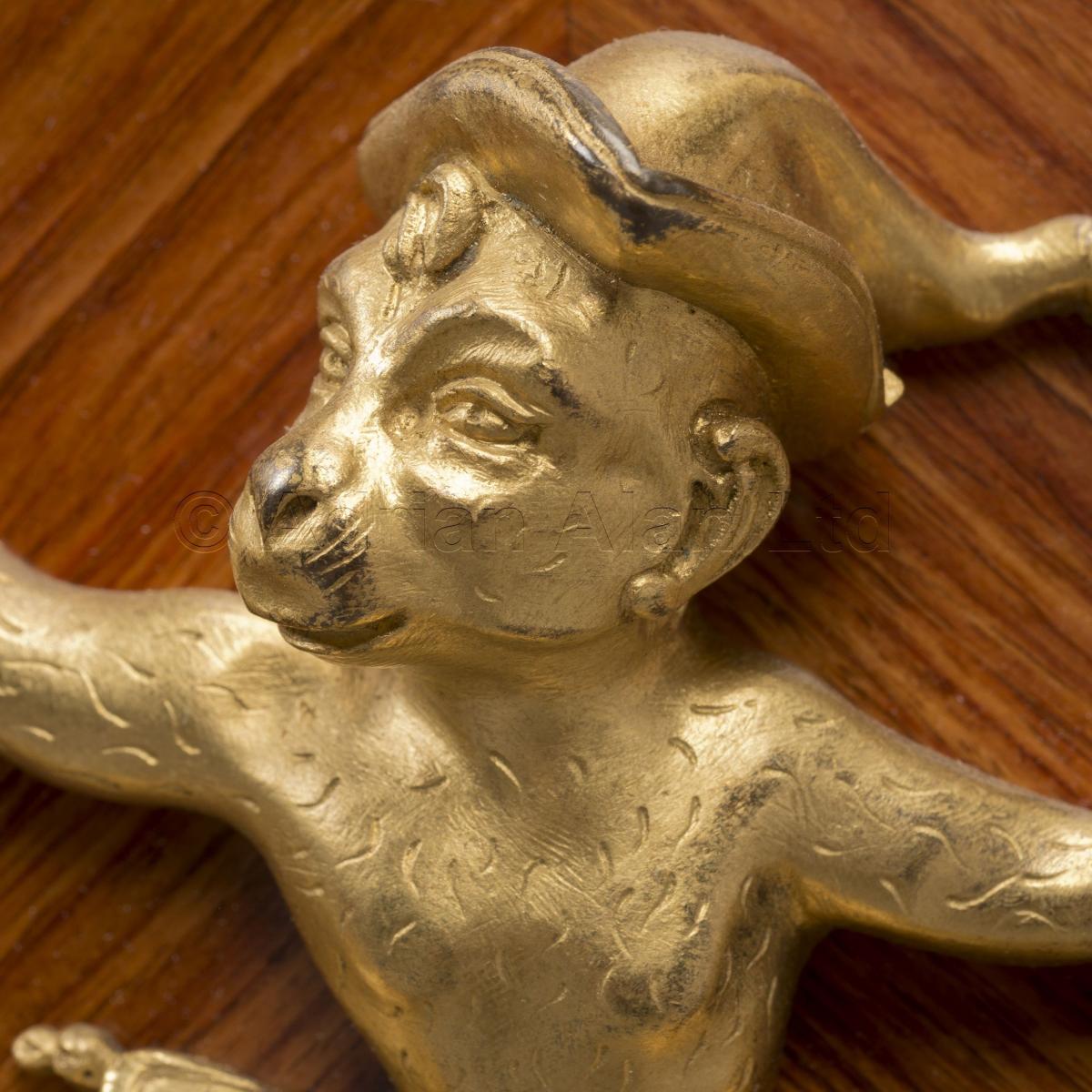 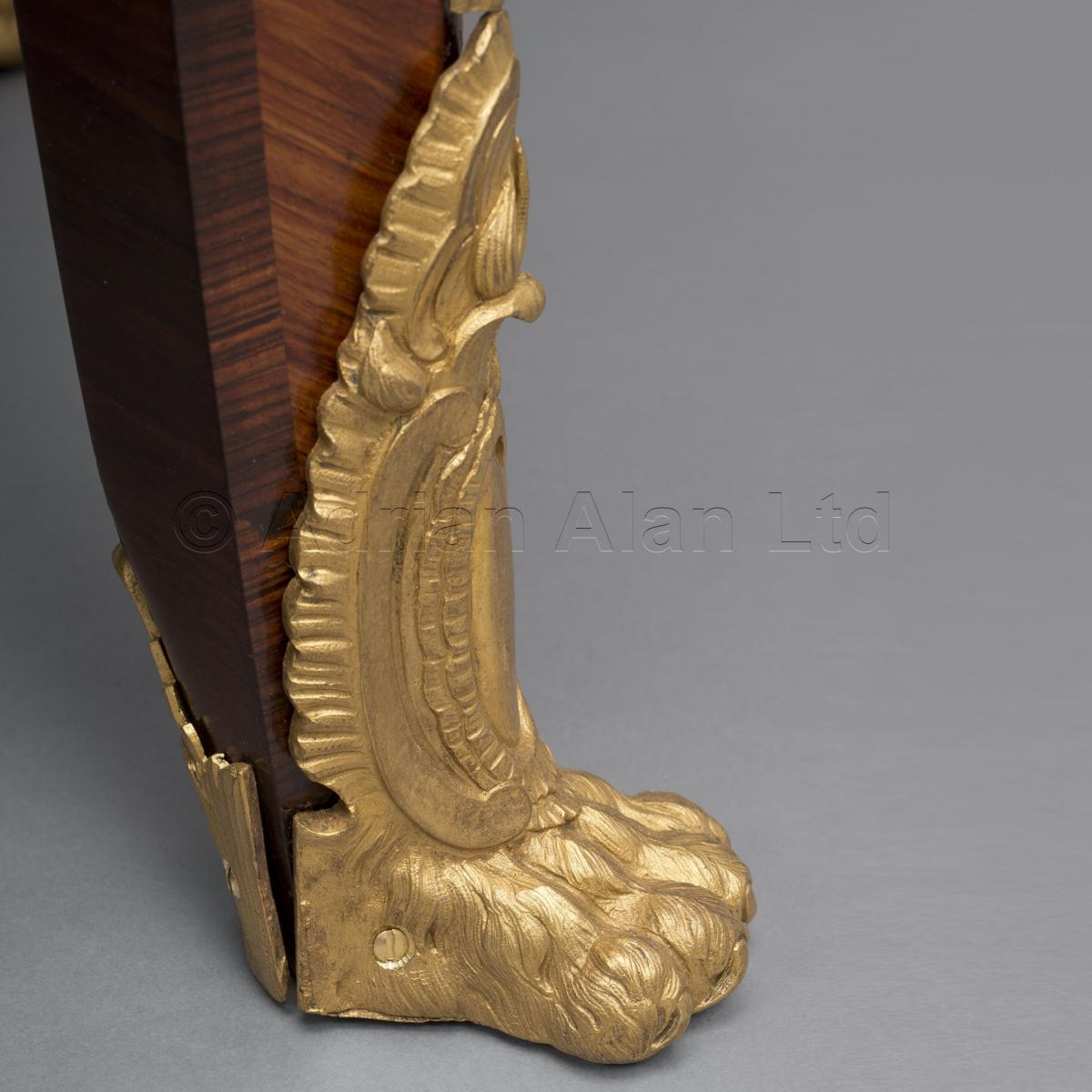 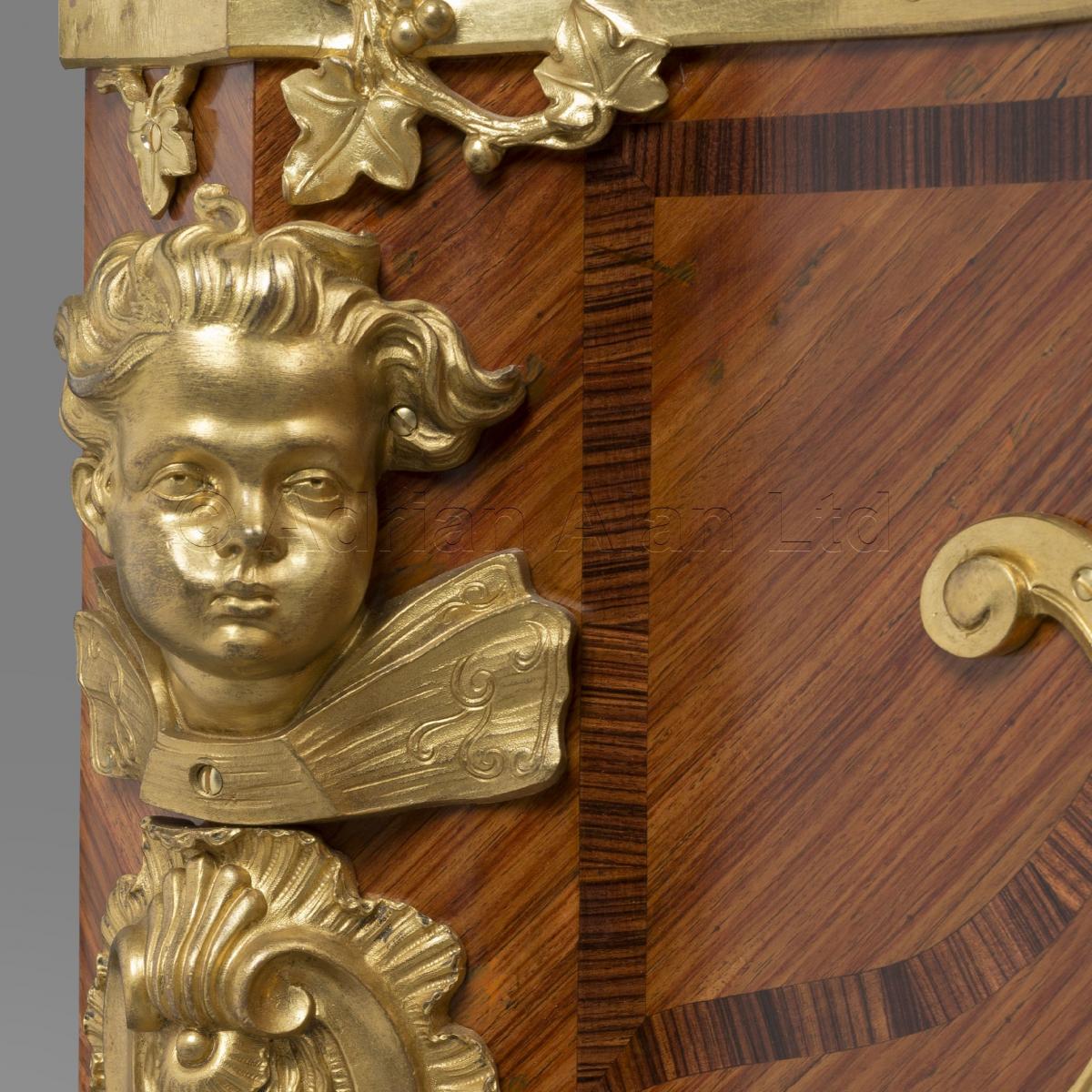 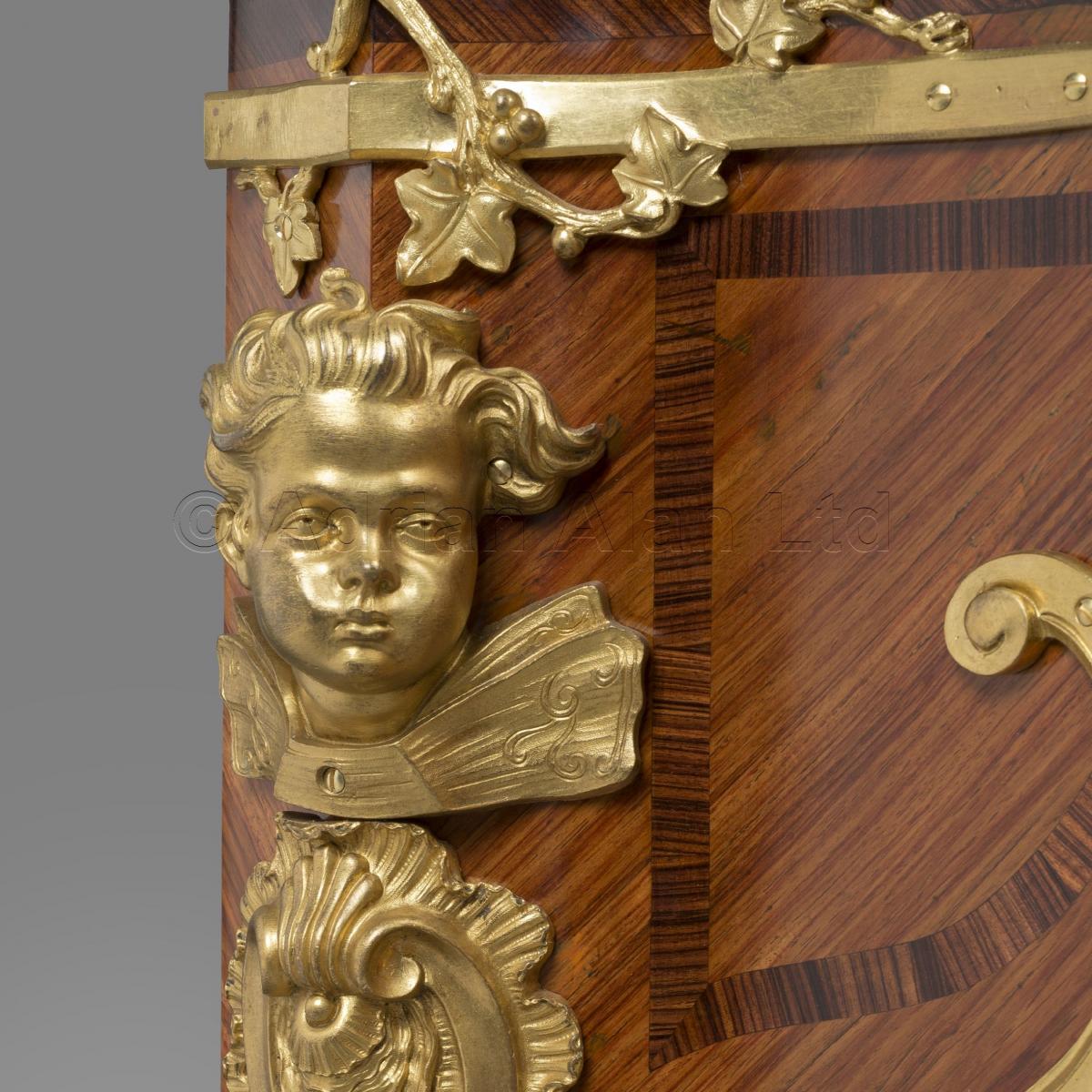 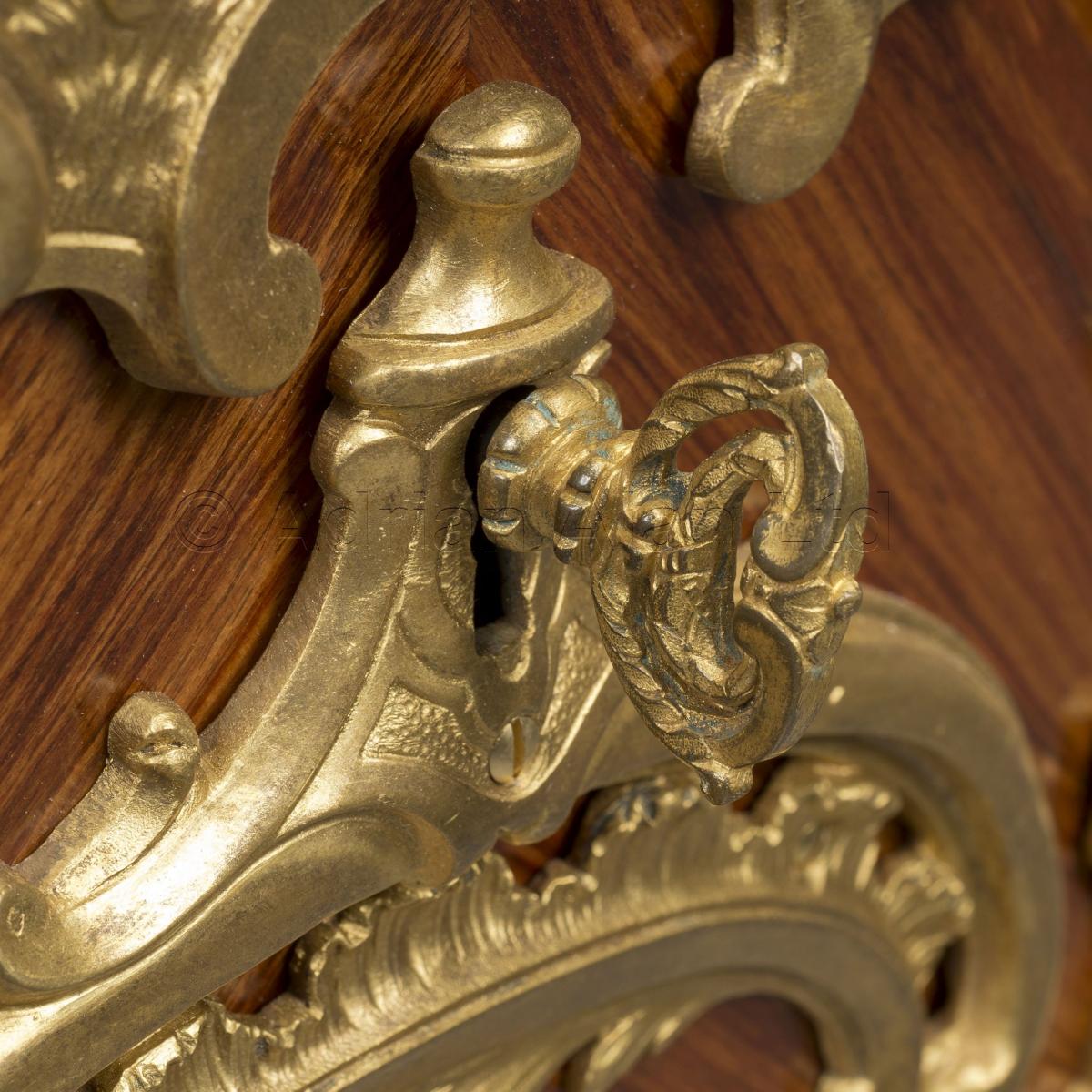 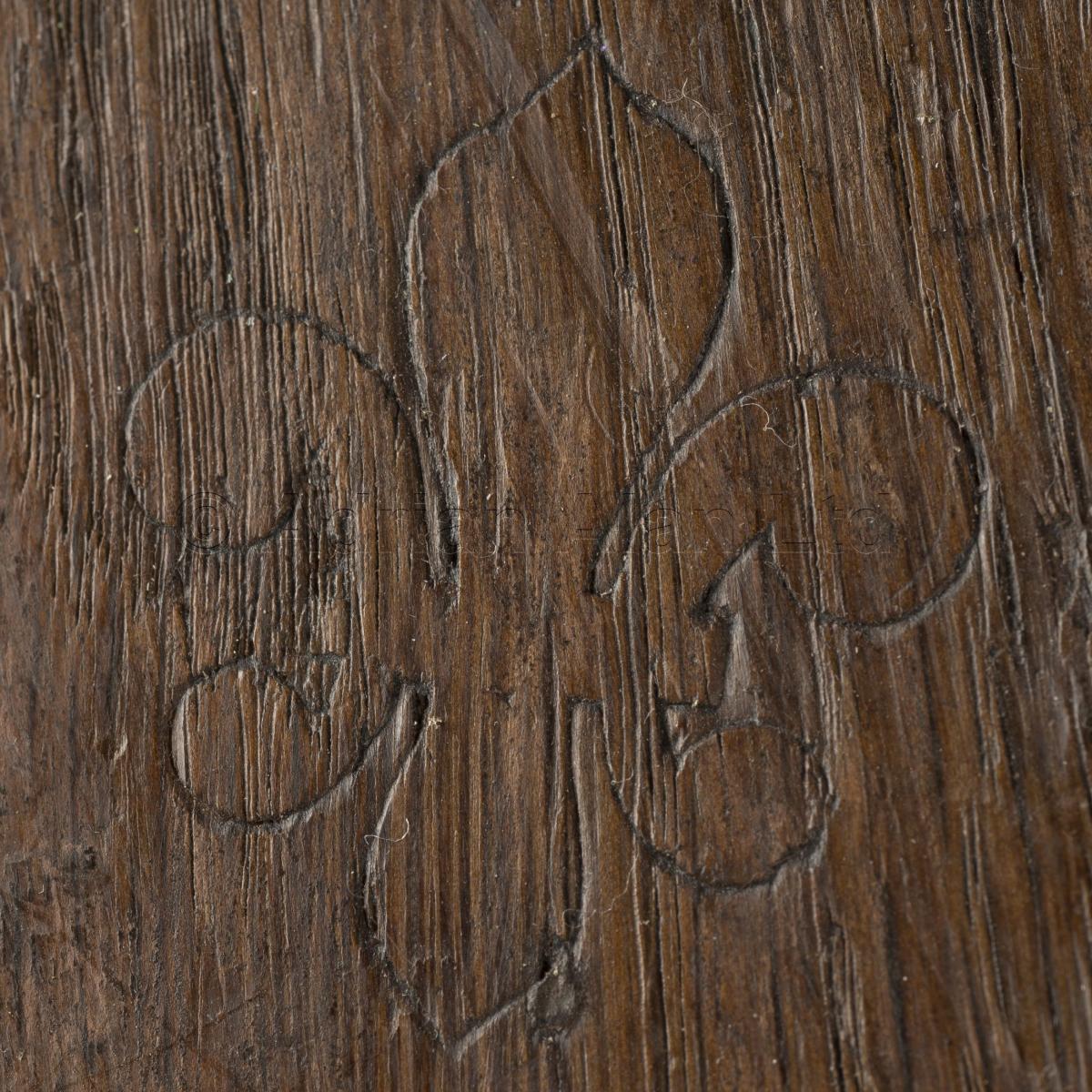 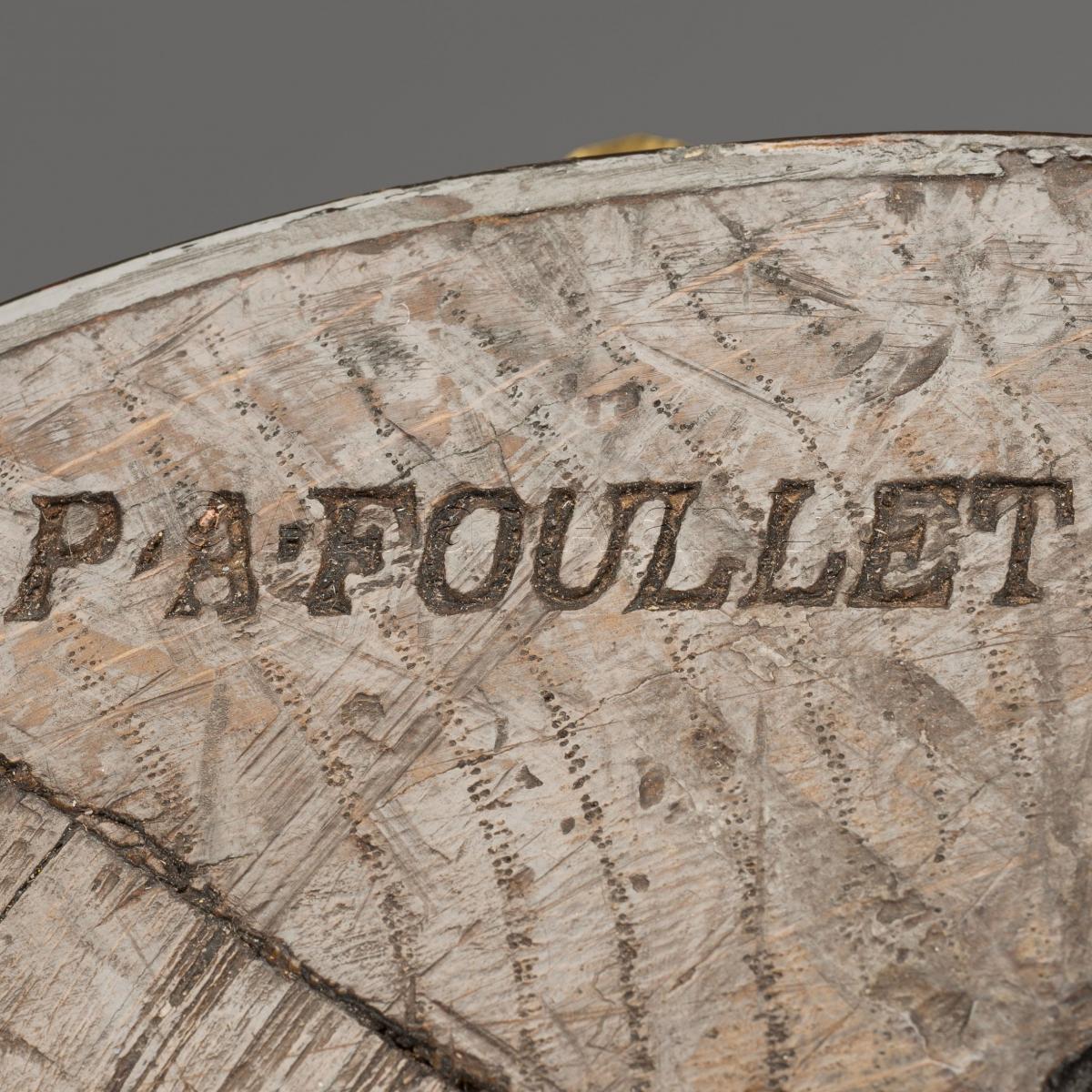 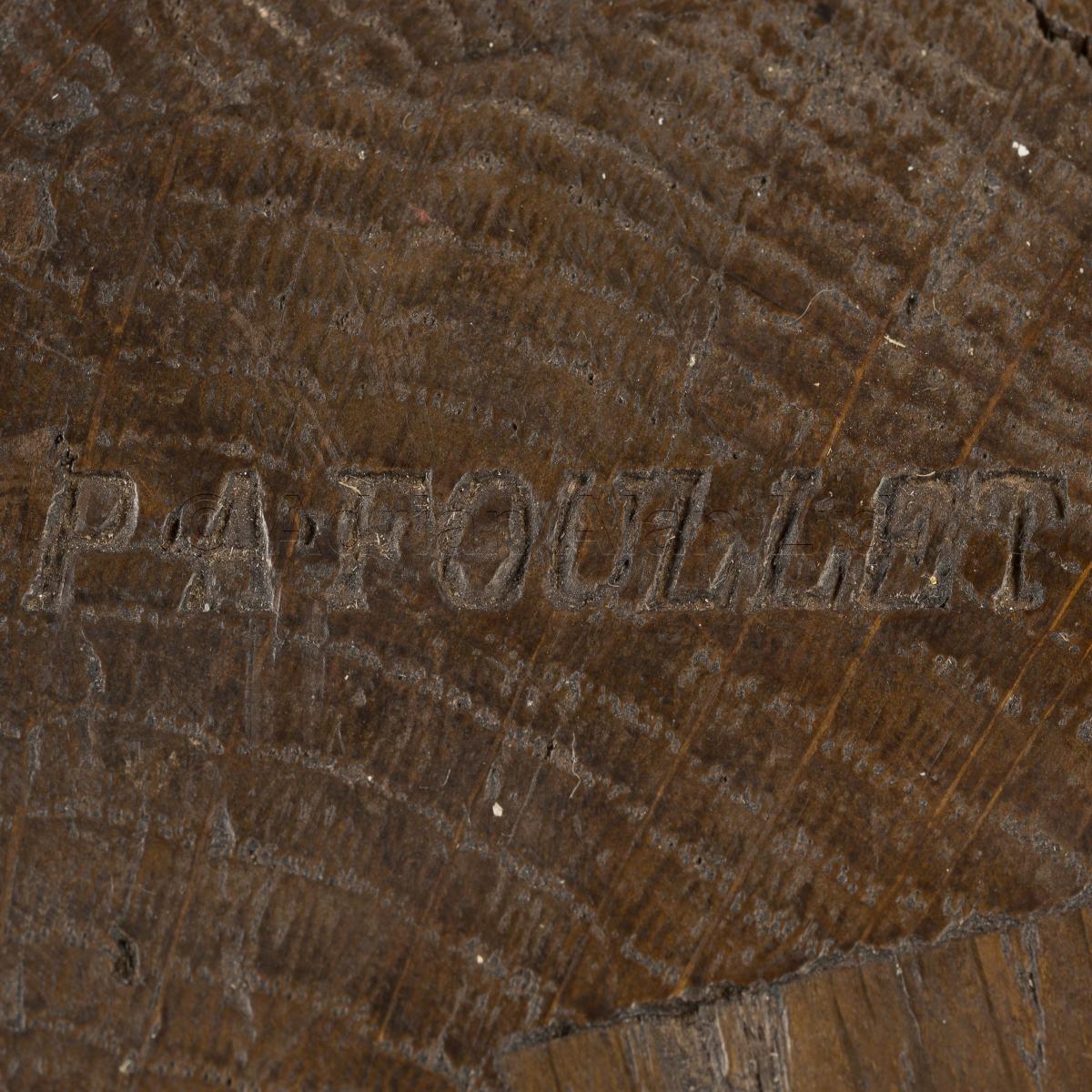 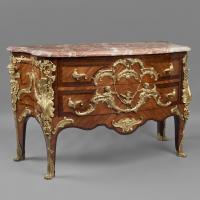 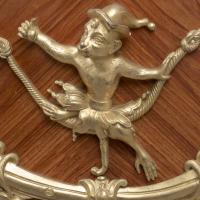 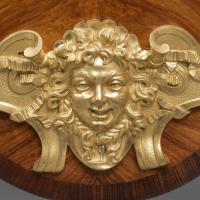 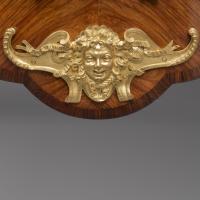 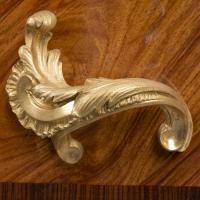 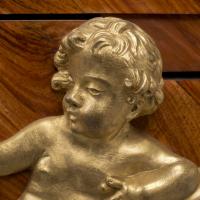 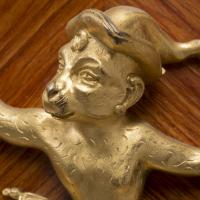 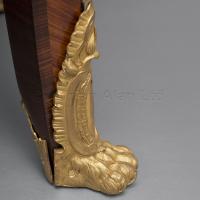 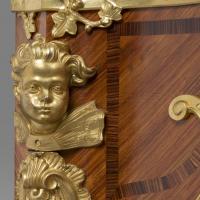 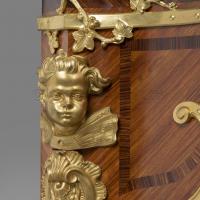 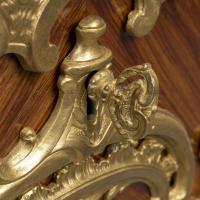 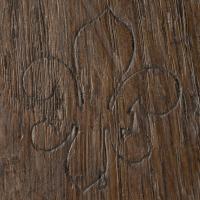 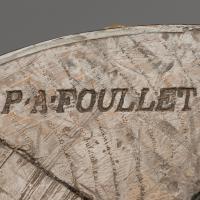 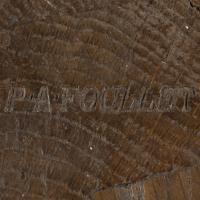 Stamped spuriously to the carcass ‘P A Foullet’ and with a fleur-de-lis for the eighteenth century ébéniste Paul Antoine Foullet.

This fine sculptural commode has a shaped rouge breccia marble top with a moulded edge above a pair of long drawers elaborately decorated sans traverse with gilt-bronze mounts of scrolled acanthus leaves and putti swinging a monkey.  The apron is mounted with a winged mask and the commode raised on splayed tapering legs, mounted with lion paw sabots.

The sculptural use of gilt-bronze mounts, in particular the central 'monkey on a swing' contributes much to the originality and charm of this commode. On the front, two children are swinging a monkey (dressed in a skirt and bonnet) on a rope, against a background of sculptural ornamentation in the form of mascarons, consoles and acanthus leaves which extend round to the sides of the commode. The angles are decorated with large fronded acanthus clasps, embellished with beading, from which festoons of flowers and other decorative mouldings extend along the apex of the legs, which terminate in lion paws. The uprights to the rear of the commode are embellished with the heads of two winged putti.

Cressent was almost unique in the world of cabinetmaking in that he trained as a sculptor before marrying the widow of a cabinetmaker and taking over the running of his workshop.  His sculptural training is evident in the design of these highly inventive and original bronzes.  Playing a pivotal role in the formation of the Rococo style in France, his work went on to inspire many notable cabinet makers, not just in the eighteenth but throughout the late nineteenth and early twentieth centuries, including esteemed cabinet makers such as Joseph Emmanuel Zwiener (1849 - 1895) and Francois Linke (1855 - 1946).

A related commode features in Christopher Payne's book, François Linke: The Belle Epoque of French Furniture, which he attributes to probably being an early Linke piece made for Krieger.

Charles Cressent (1685-1768) was a leading French ébéniste and sculptor of the late Regence and early Rococo periods, becoming a master sculptor in 1719.  He worked as both ébéniste and sculptor to the Regent, Philippe II, Duc d'Orléans.  His furniture was often decorated with plain veneers, usually of satinwood and amaranth, or veneers in patterns of parquetry.

Cressent was best known for the highly sculptural and often figurative, gilt-bronze mounts that ornamented his furniture.