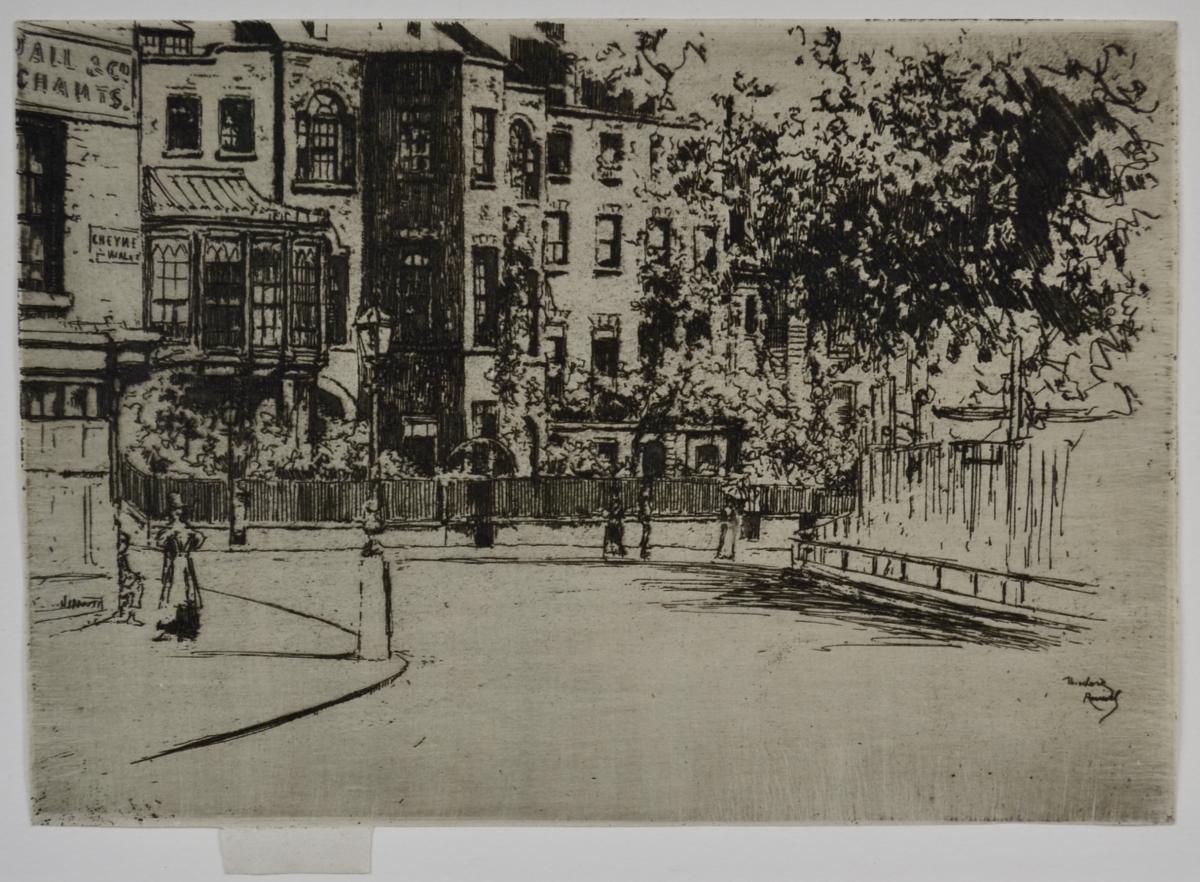 The Corner of Cheyne Walk, Chelsea

Etching, unsigned, with the artist’s tab, signed in the plate, trimmed to the platemark with unsigned tab, printed in heavy tone.

Born in Lorient, Brittany and having fought in the Franco-Prussian War, Roussel moved to England in 1870.  He settled in London and shared a studio with Percy Jacomb-Hood and Thomas Henry in Chelsea.  Although he first began exhibiting in London in 1872 it was not until 1885 that Whistler became aware of his work and arranged to meet him. The two artists found they not only shared similar subject matter but their artistic sympathies and thoughts about the art establishment were also the same.  Unusually for Whistler and his friends, they remained on good terms for life.  Along with Whistler he became a member of the Royal Society of British Artists in 1887 only to resign with Whistler and his followers in 1888.  Whistler is supposed to have said of Roussel, “At last I have found a follower worthy of the master”.  Although never actually a pupil, Whistler’s influence on Roussel’s work was immense, particular during his time living in Chelsea between 1880 and 1891.

In 1891 Roussel moved to Parsons Green, Fulham and his continued to paint aesthetic landscapes and portraits as well as producing many excellent etchings.  Roussel died in St Leonards on Sea in 1926 and a Memorial Exhibition of his work was held in the following year at Goupil Gallery, London.  More than 30 of his pictures were included in the “London Impressionists” exhibition at the Michael Parkin Gallery, London in 1975.  Examples of his work are in the collection of the Victoria & Albert Museum, Tate Gallery and other public collections.

Battersea from Chelsea was executed c.1888-9 in a total of about 30 impressions.  It was probably drawn from the Greaves boatyard at Lindsay Wharf.  The subject is the corner of Beaufort Street and Cheyne Walk, seen from the Chelsea End of Battersea Bridge.  The Georgian house, with a veranda on the second floor if Belle Vue Lodge, next to it is Belle Vue House and to the right of that is Lindsey Lodge where Whistler lived between 1866-1878.  Examples are in the collections of the Rijksmuseum, Amsterdam; British Museum, London and National Gallery of Art, Washington.