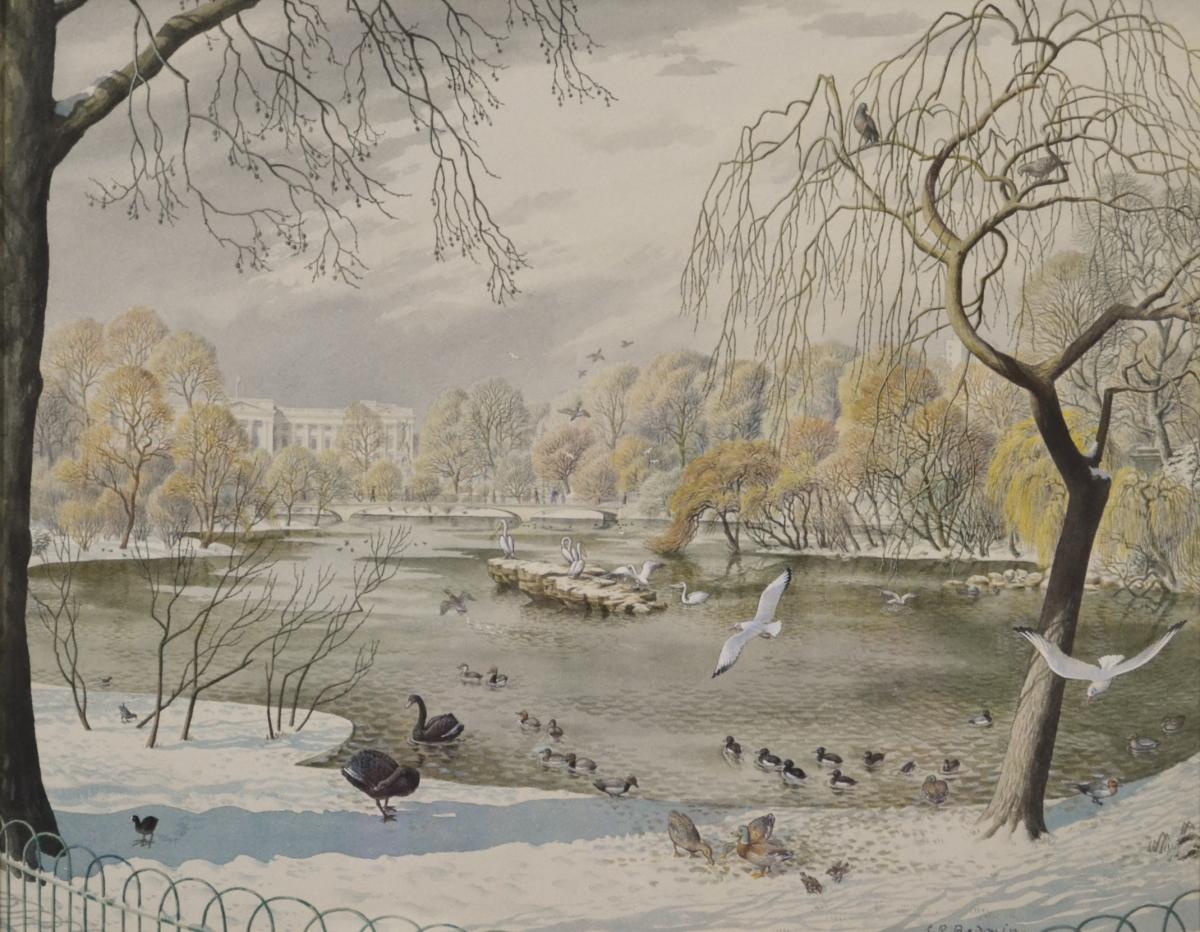 Commissioned from the artist in 1965 by the Shell Collection;

Badmin was born in London and studied at Camberwell School of Art and the Royal College of Art, which he left in 1928. Known for his details and affectionate depictions of the English countryside and his poster and illustration most notably for Shell Oil.  At the age of 26 he became on the youngest ever members of the Royal Watercolour Society and was also a member of the Royal Society of Engravers.  He exhibited at the Fine Art Society, Leicester Galleries and elsewhere.  The Victoria & Albert Museum and British Museum hold examples of his work.  He lived in Bignor, Sussex.

The present work was commission by the Shell oil company in 1964 for the Bird Sanctuary Series.  For the series they commissioned Badmin, Richard Eurich, Rowland Hilder, Peter Scott, Charles Tunnicliffe, Talbot Kelly, Donald Watson and Eric Ennion to paint a group of paintings of bird sanctuaries to appear in magazine advertisements during the following year.  Badmin contributed St James’ Park and Rostherne Mere.

The picture was reproduced as a Shell advertisement in the Illustrated London Newsof 1965. It was accompanied by three small vignettes of birds by Eric Ennion and the following description by the naturalist and broadcaster, James Fisher:

“Our most accessible bird sanctuary has existed in Westminster at least since 1536, when Henry VIII issued an order preserving partridges, pheasants and herons from the Palace of Westminster to Highgate.  The exotic waterfowl collection dates from the Restoration in 1660; except in wartime, pinioned pelicans have been in London ever since the Russian Ambassador brought Charles II two of the grey or Dalmatian species in 1662.  The present birds are of the eastern white species.  Mallard, tufted duck and pochard now breed here regularly, as may mute swan, moorhen, coot, jay, carrion crow, and about 11 other birds.  Another 9 or so breed sometimes, including the dabchick.  In an average year, a London bird watcher can log nearly 50 species.  Even in February, when summer visitors are away, about 45 species have been seen; among them 4 species of gulls, 10 of wildfowl, and woodpeckers and owls.

Roy Badmin’s painting show Buckingham Palace from Whitehall end of Park Lane.  On the snow-covered grass bank in foreground, from left to right, are coot, pair of Australian black swans, pochard drake and 2 pairs swimming, duck mallard and 2 drakes, house sparrows, sleeping drake mallard and drake wigeon.  On the island are 5 pelicans; to left of it a drake mallard takes off and below it is a paid of (exotic) re-crested pochards.  By the tree swims a group of tufted ducks, the drake a handsome black and white; to right of the tree a pair of teal.  Flying are typical Inner London winterers, black-headed gulls, not yet assuming full chocolate hoods for breeding season.  Eric Ennion’s vignettes show jay, tawny owl and woodpigeons; typical Inner London breeding residents – birds shy in the country – that have learned the safety of an urban oasis.

Access free; in February, bowler hat, overcoat, umbrella and binoculars advised equipment, with sandwiches in briefcase, as carred by numerous ministers and serior civil servants in the area.”