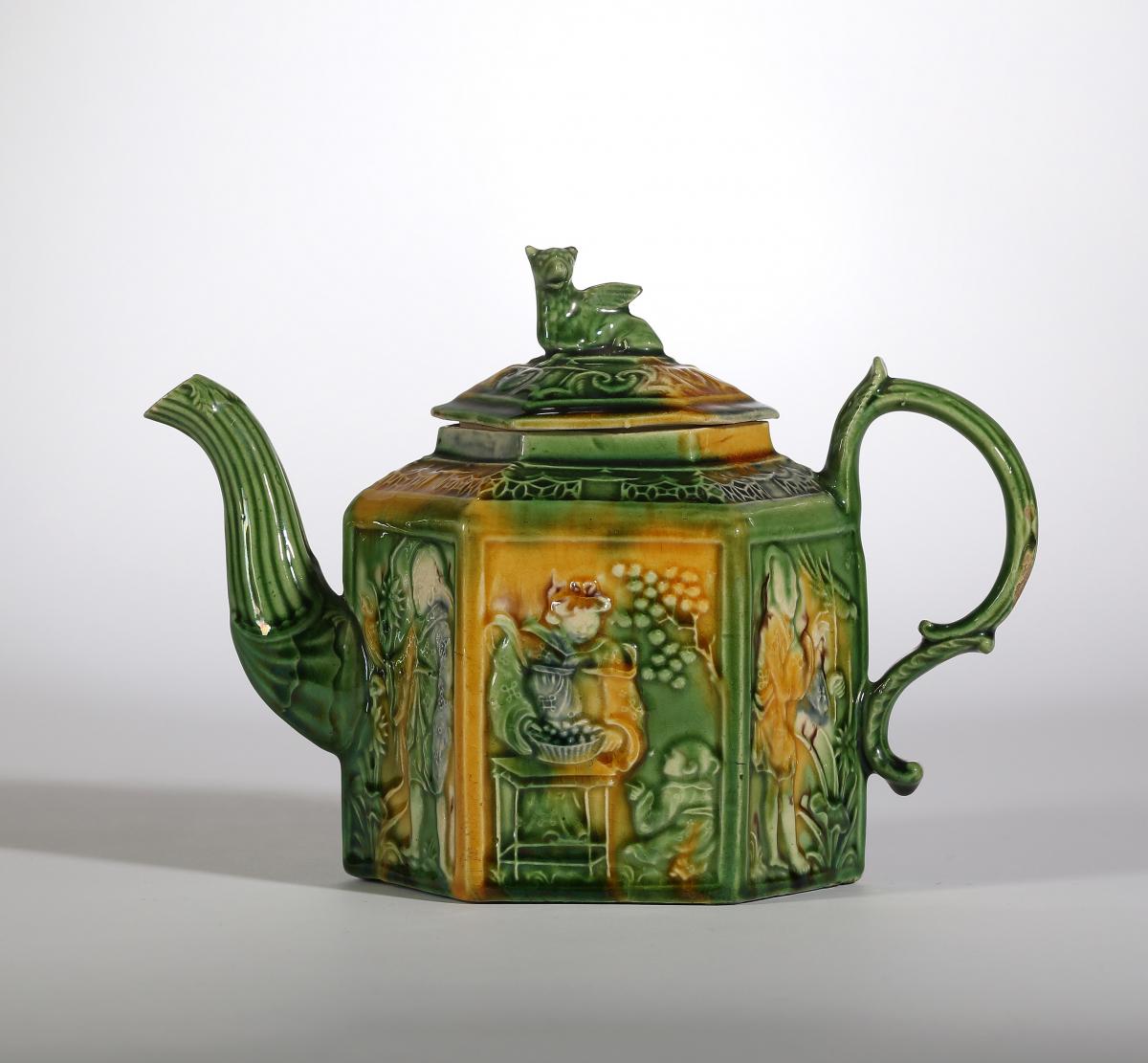 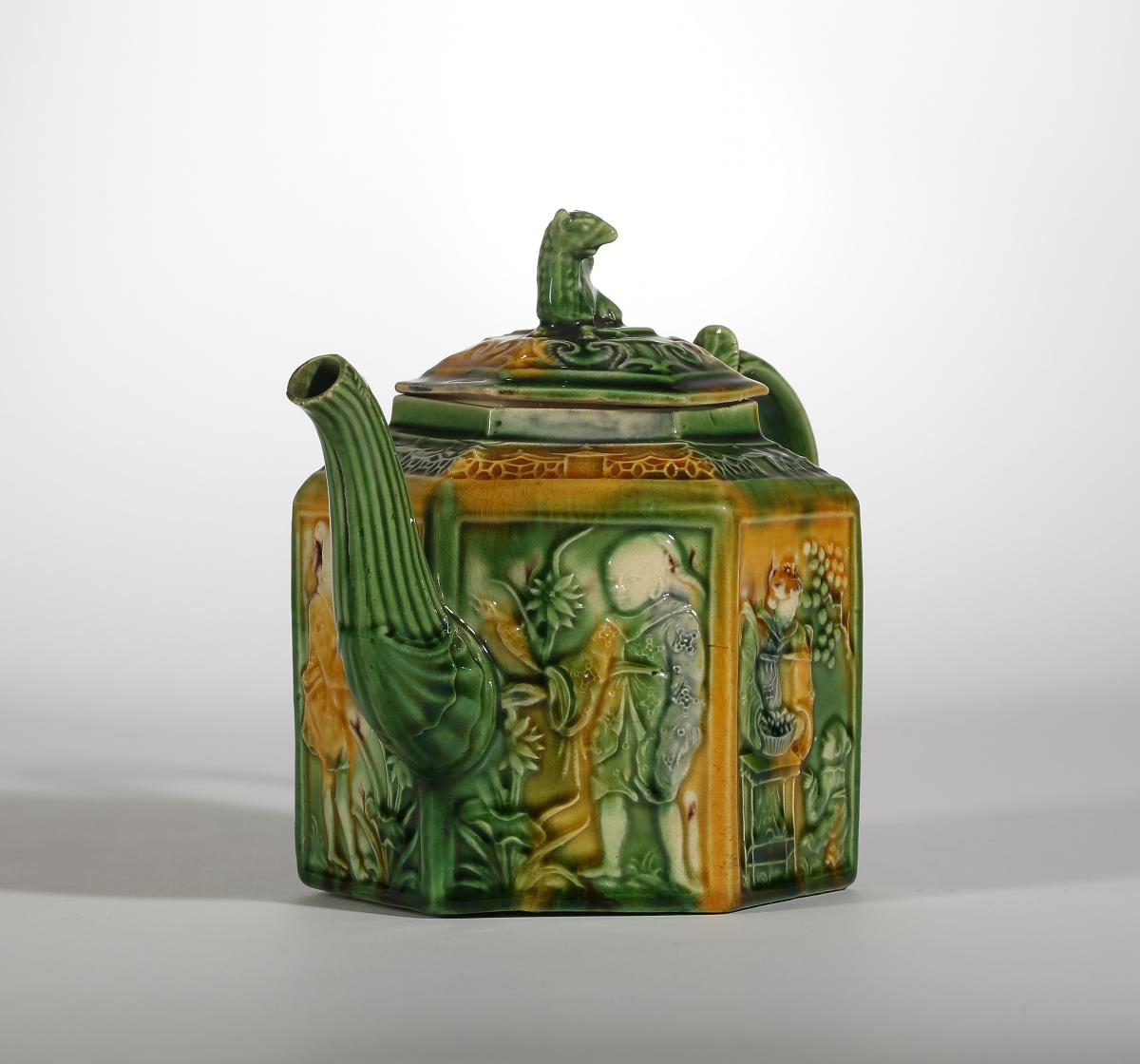 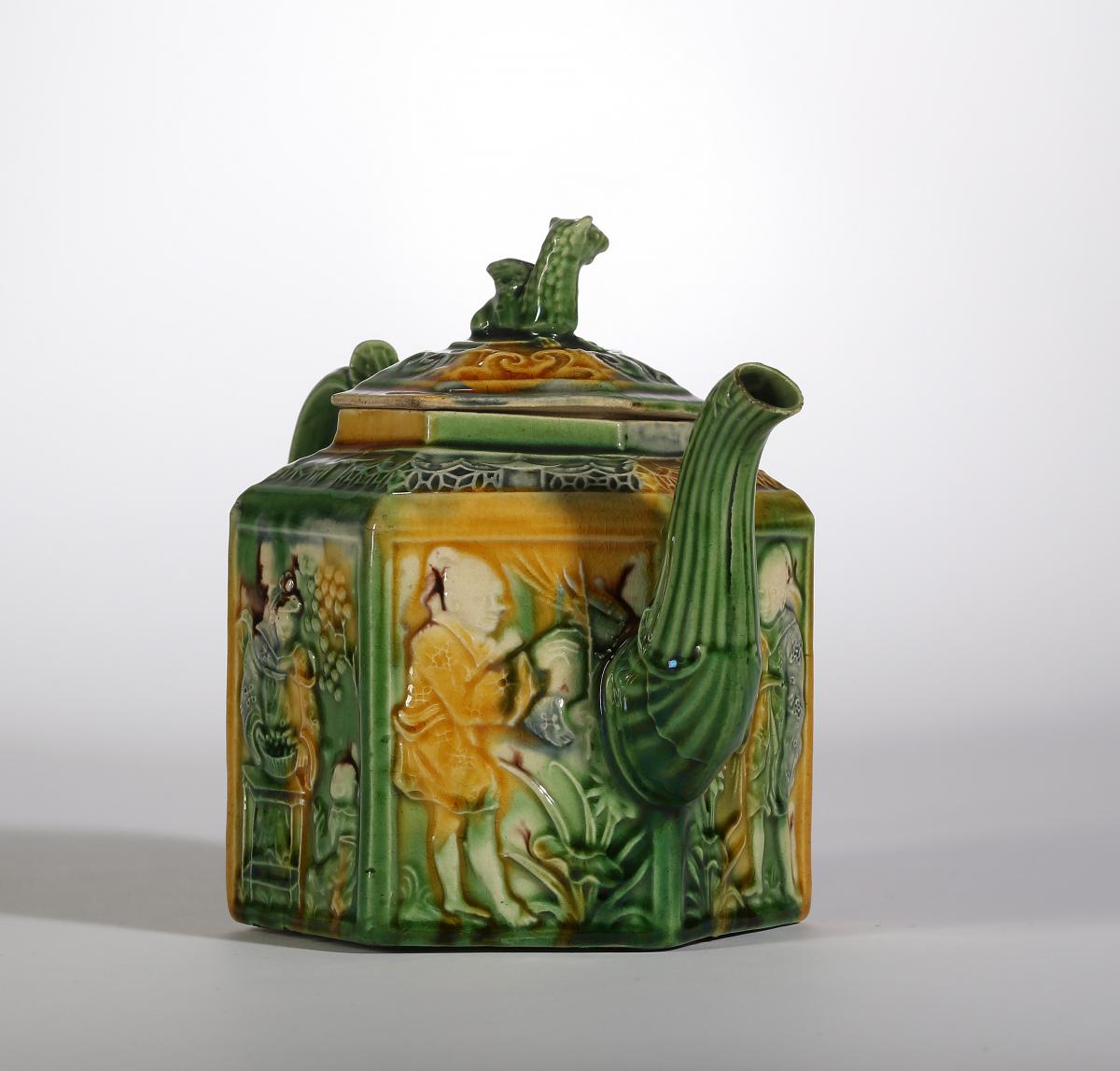 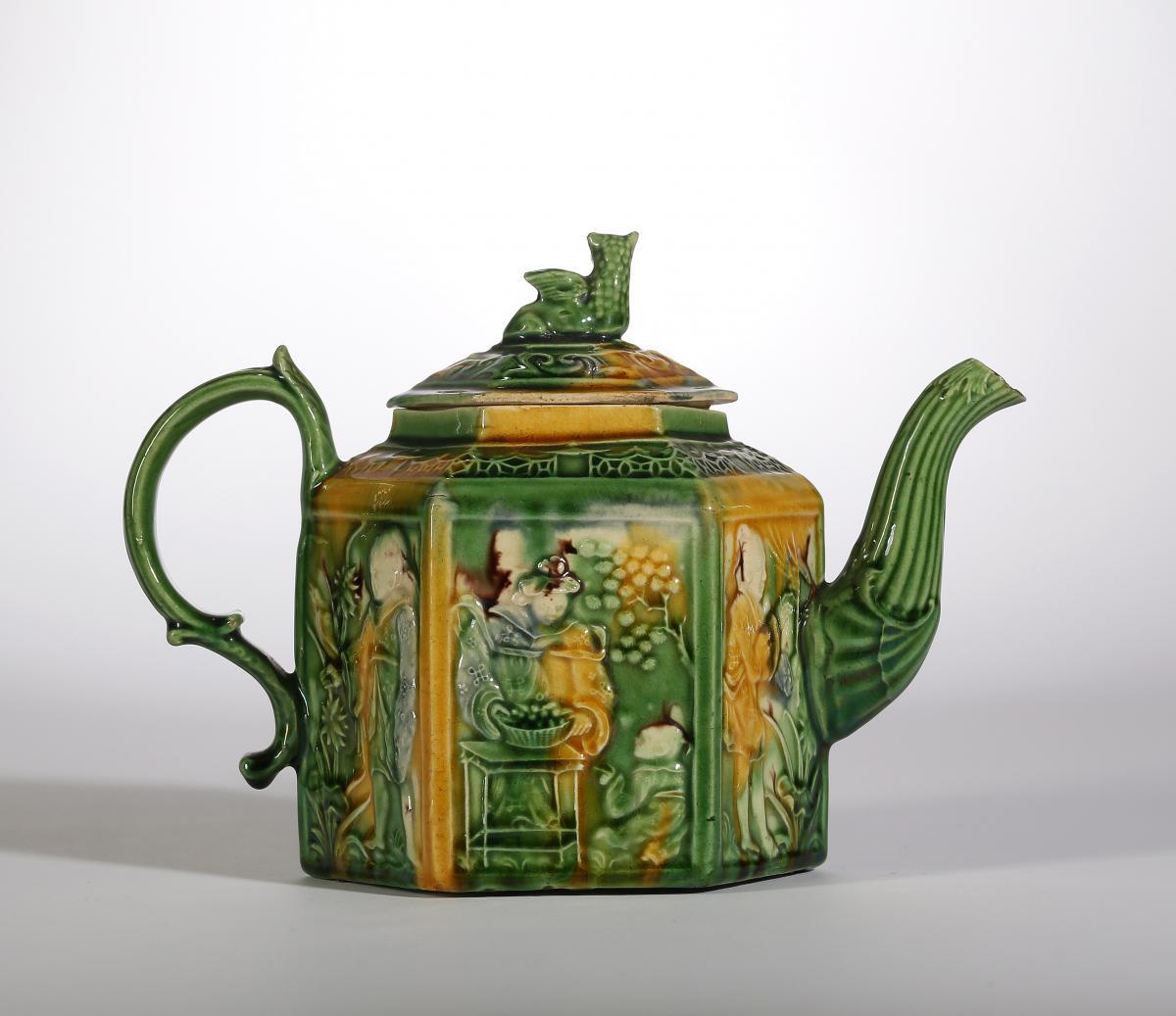 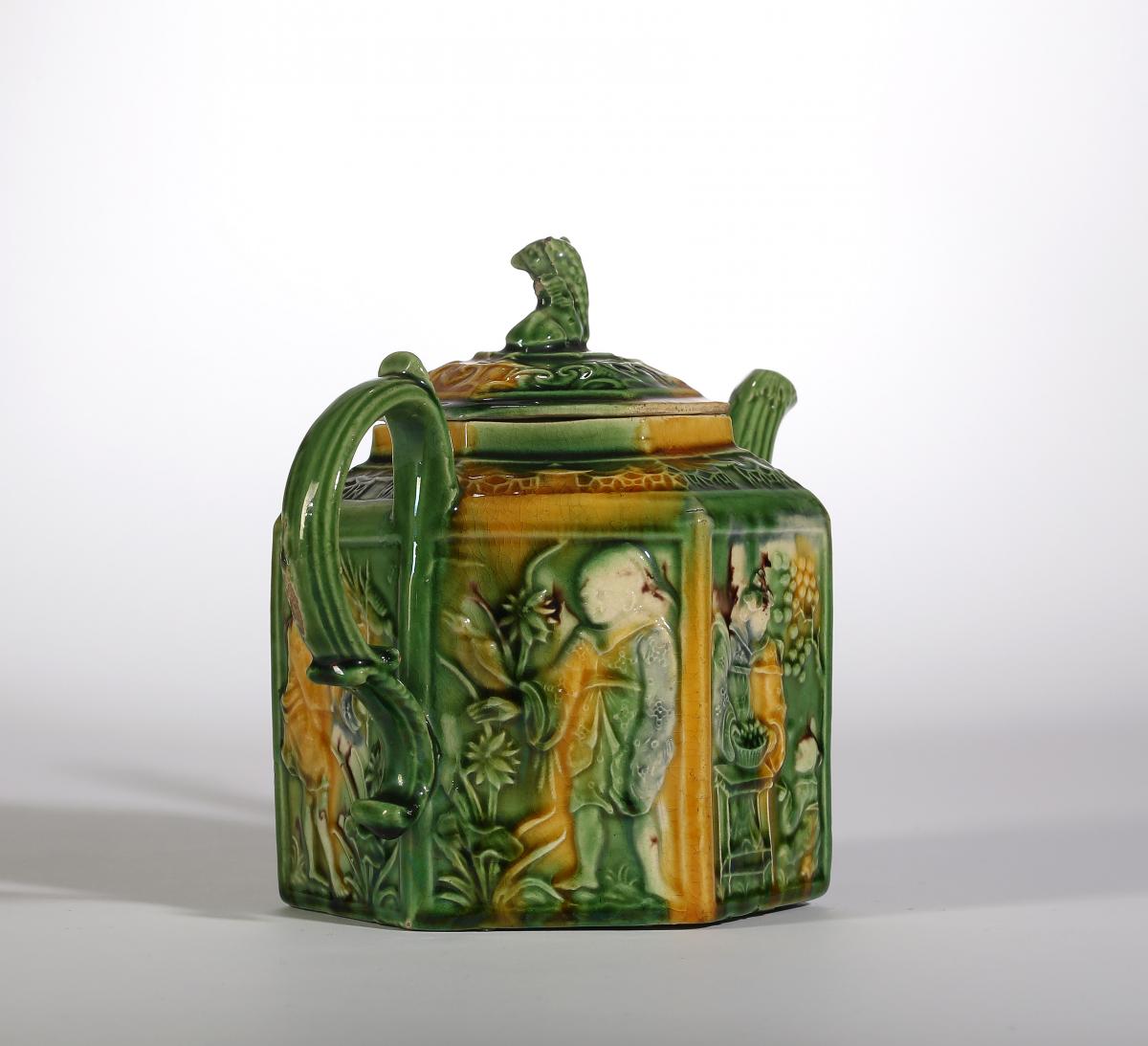 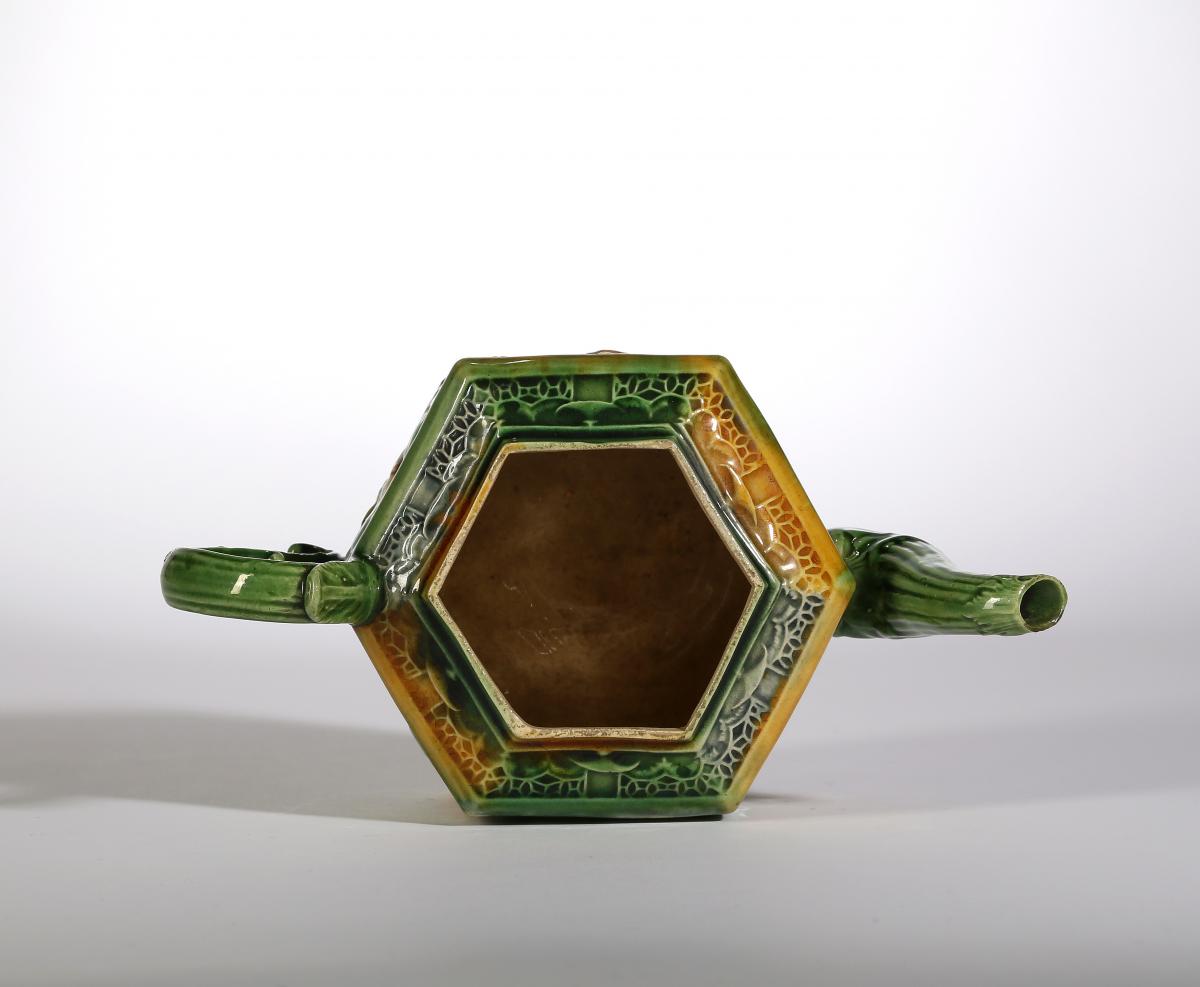 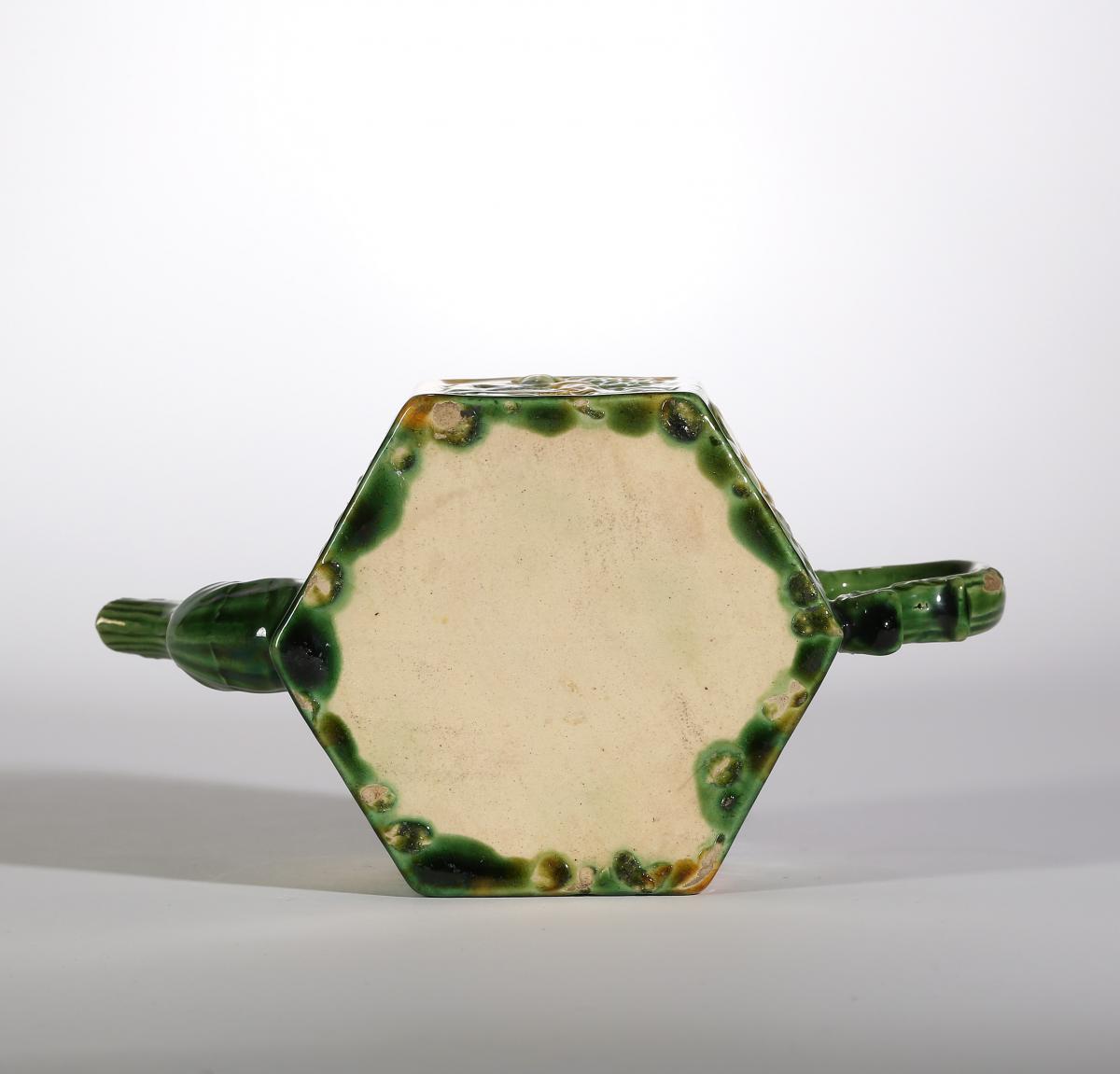 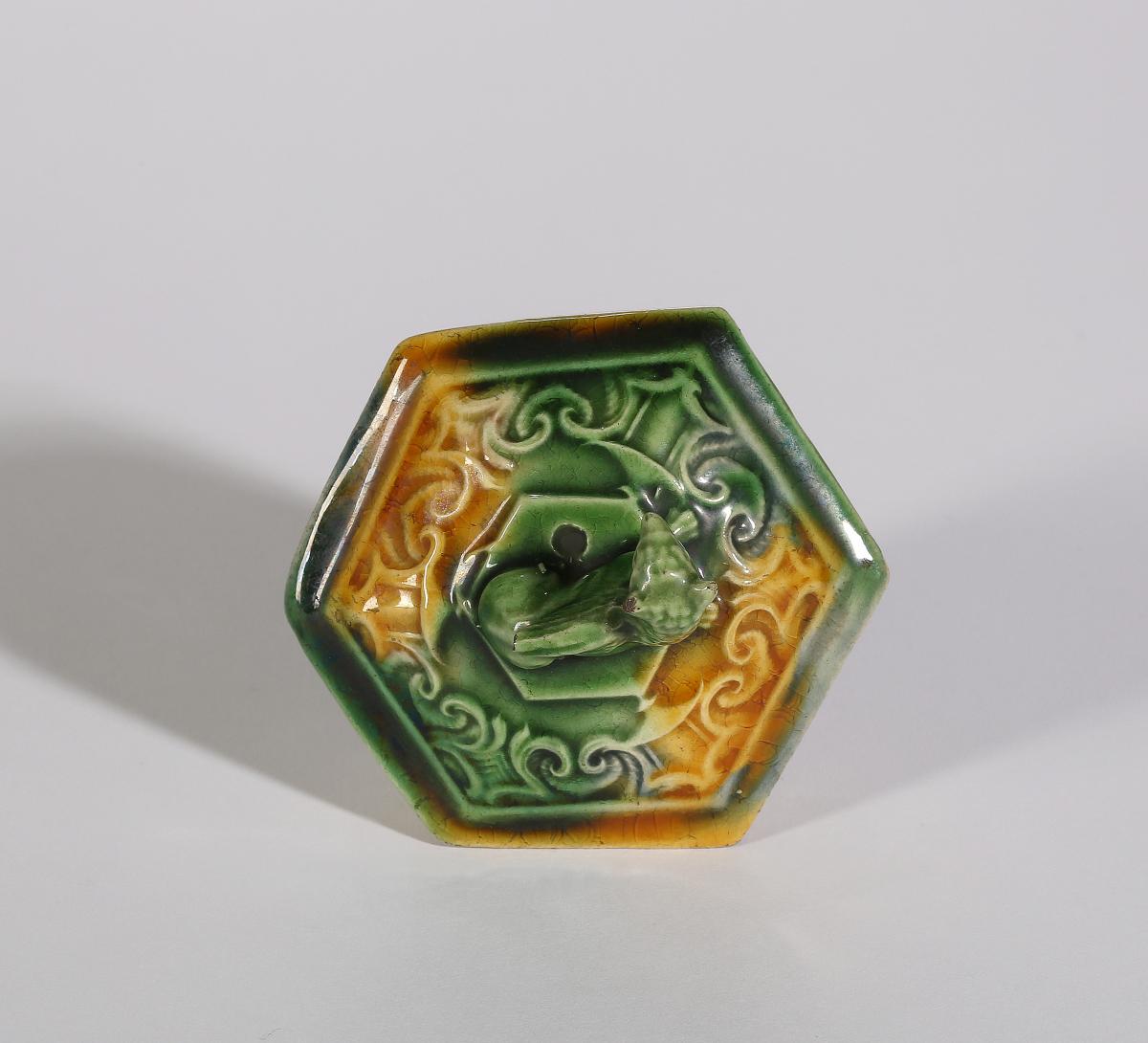 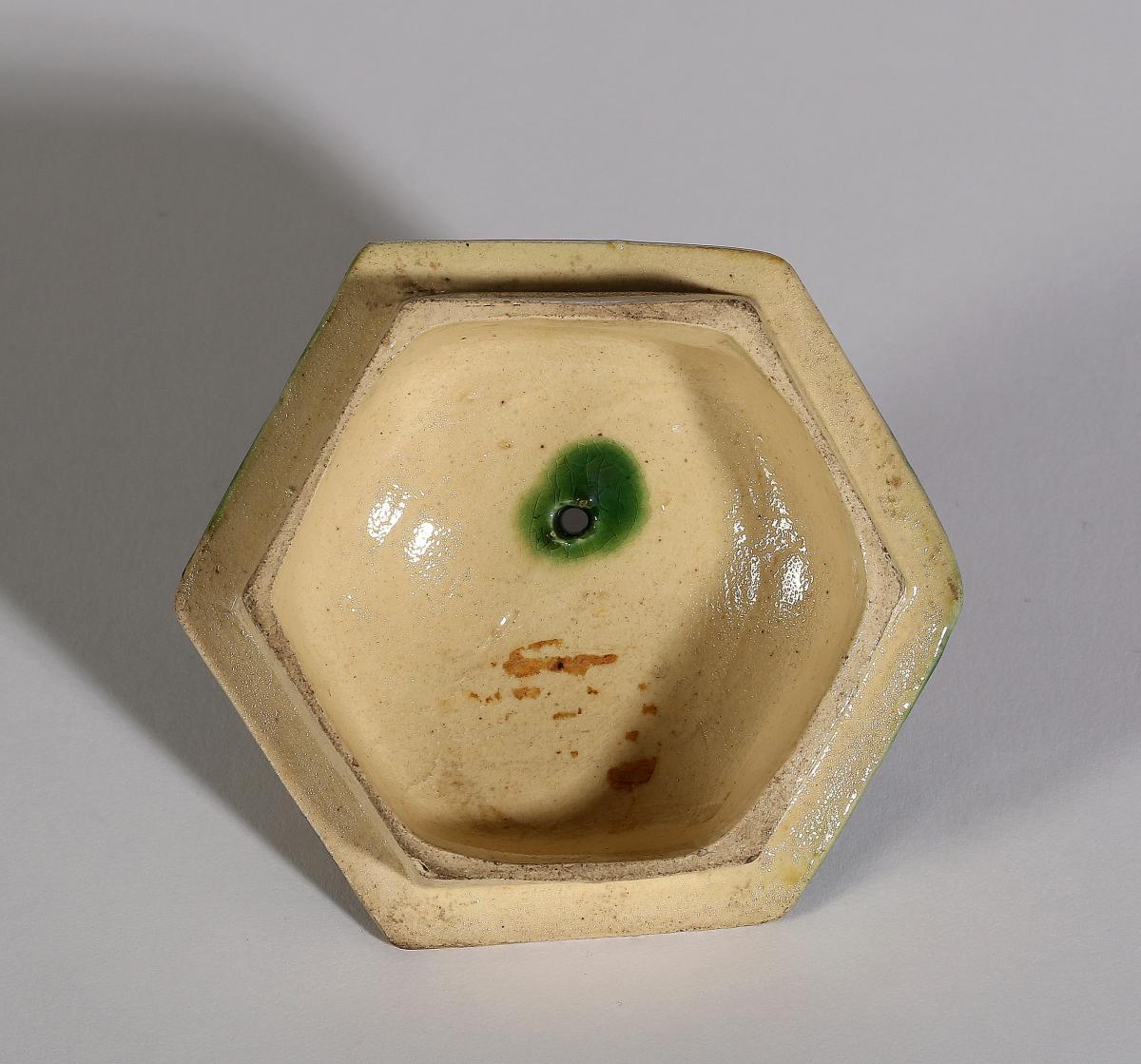 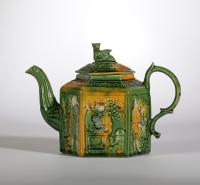 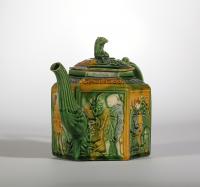 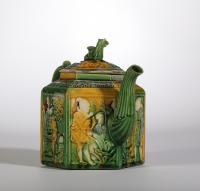 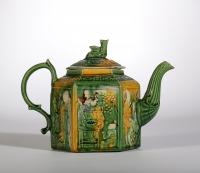 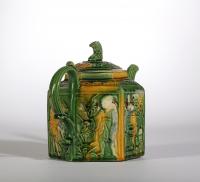 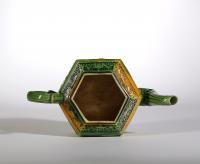 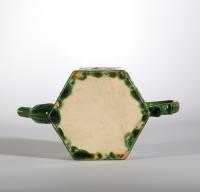 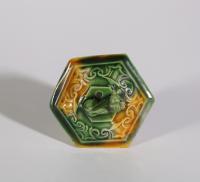 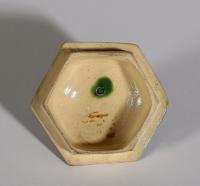 This is a particularly crisply moulded example of a Staffordshire hexagonal chinoiserie teapot glazed with a harmonious balance of green and yellow splashes, tinged with blue and purple details.[1]

There are six press–moulded panels around the sides containing three different designs. The subjects represent daily life in China as imagined by Europeans: a young man with his hair in a top knot stands in a garden with a bird perched on his hand; a woman leans over a table with a dish of fruit she has just prepared while a small child sits at her feet; and another young man also with his hair in a top knot stands with a bird perched on a stick. Around the shoulder is a band of moulded fretwork with scrolls centring a pagoda above each panel. It has a double scroll handle and the spout terminates with a large shell at the base. The finial depicts a recumbent griffin.[2]

When the teapot was made in the mid–eighteenth century interest in all things Chinese had reached its apogee. There was a small industry in illustrated books filled with plates of curious and exotic images inspired by China, but seen through a European perspective. These books were intended to inspire British craftsmen looking for fashionable designs. One of the more influential was George Edwards and Matthew Darly, A New Book of Chinese Designs Calculated to Improve the present Taste­—CONSISTING OF Figures, Buildings, & Furniture, Landskips, Birds, Beasts, Flow.rs and Ornaments, London, 1754.[3]

The publication featured 21 plates with ideas for furniture, wallpaper and fabric designers and decorative painters (‘Japanners’). Matthias or Matthew Darly (fl. c. 1740–d. early 1770s), an English engraver also known for as a prolific caricaturist, had just completed working with the great cabinetmaker Thomas Chippendale on plates for The Gentleman’s and Cabinet–maker’s Director, many of which featured chinoiserie elements. Darly was assisted in the fanciful designs by the ornithologist George Edwards (1694–1773) celebrated for his accurate illustrations of nature in The Natural History of Uncommon Birds and Animals, London, 1743–51; his fanciful designs in A New Book of Chinese Designs is evidence of his commercial fluency.

The panels of the young men with top knots appear in plates 22 and 7. The scene of the woman and the small child are taken from plate 32, but the inventive designer has taken the two figures at extreme ends of the image which are separated by two ladies at a table buying and selling trinkets.[4] Around 1765, the Bow porcelain factory apparently also had a copy of plate 32 from A New Book of Chinese designs or at least a fragment of the central section with the two women, which they used as a transfer–printed pattern.[5]

It is tempting to suggest that the Bow factory was inspired by the Staffordshire work, which in terms of its design was more accomplished. It is interesting that it was almost a decade before Darly’s design prints were used in the ceramic industry. At least two other chinoiserie designs from Darly’s book appear on press–moulded Staffordshire wares, some of which appear on red stoneware, a more obvious association with China’s Yixing wares.

It is almost impossible to attribute these wares to a specific factory as the master moulds were sold to various pottery works: the exact mould for this teapot in salt–glaze stoneware is in the Victoria and Albert Museum.[6]

Wasters with similar moulding have been excavated from two sites in North Staffordshire at Thomas Whieldon’s Fenton Vivian factory (act. 1747–1780) and William Greatbatch’s Lower Lane factory (act. 1762–1782), from a context of about 1765–1770, Humphrey Palmer’s works in the Town Road, Hanley and elsewhere.[7]

The same designs are found on tea canisters. Even the splashed glazes have a Chinese association, inspired by the so-called “egg and spinach” glazes found on Chinese ceramics wares, and possibly that described in 1735, by Lady Elizabeth Finch (1704–1784) ‘sort of Ware were yellow & green tea Cups variously and most hidiously intermixt’.[8]

[3] The source was identified by Leslie B. Grigsby, ‘George Edwards and Matthew Darly’s Chinese Designs: An Inspiration for Relief Decoration on English Ceramics’, The Magazine Antiques (February 1994), pp. 296– 305

[5] For an example see V&A, 310:1–1889, with a note “It was reported in the Art Journal in 1869 that a personal copy of this book along with various papers associated with a Bow factory employee named John Bowcock were known to have survived together. The book has since disappeared and the papers scattered to private and public collections.”