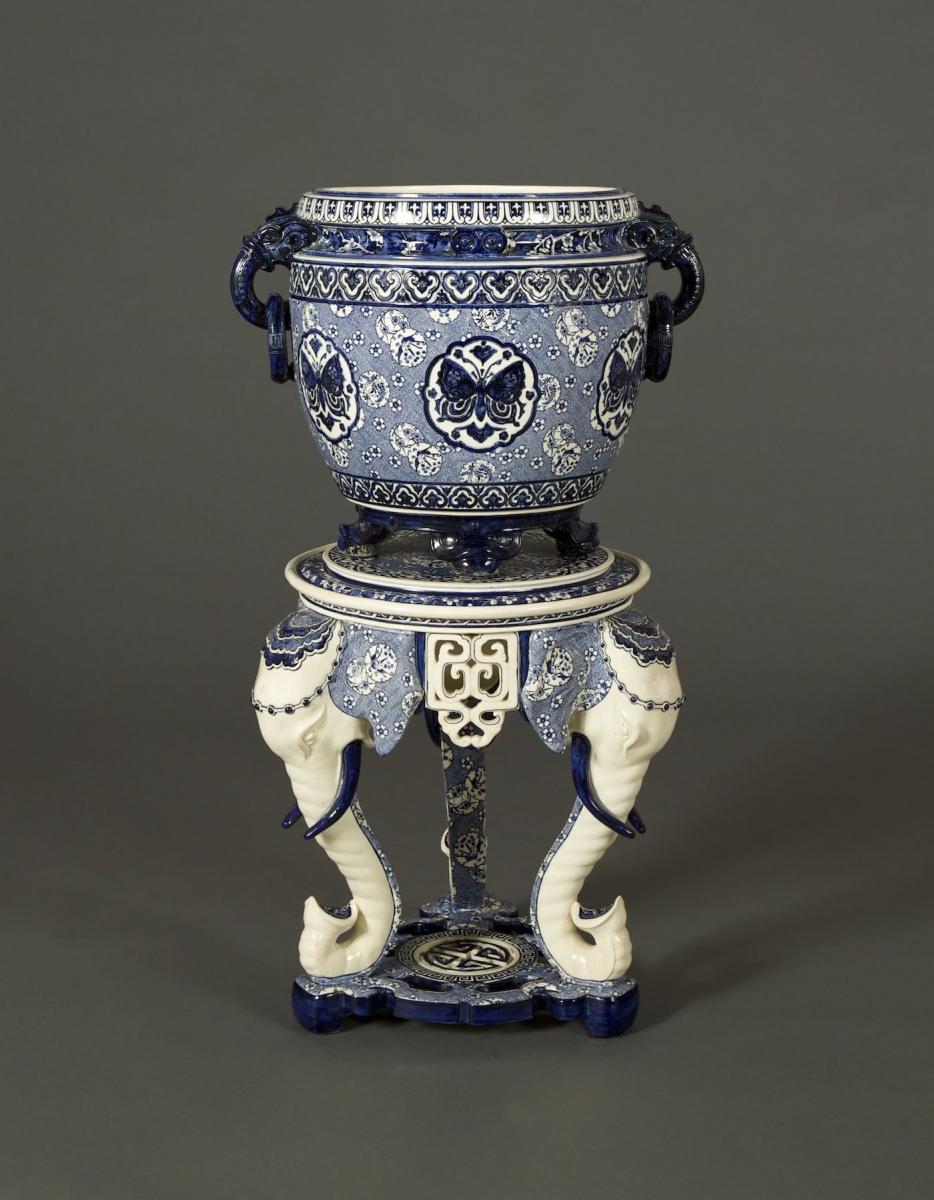 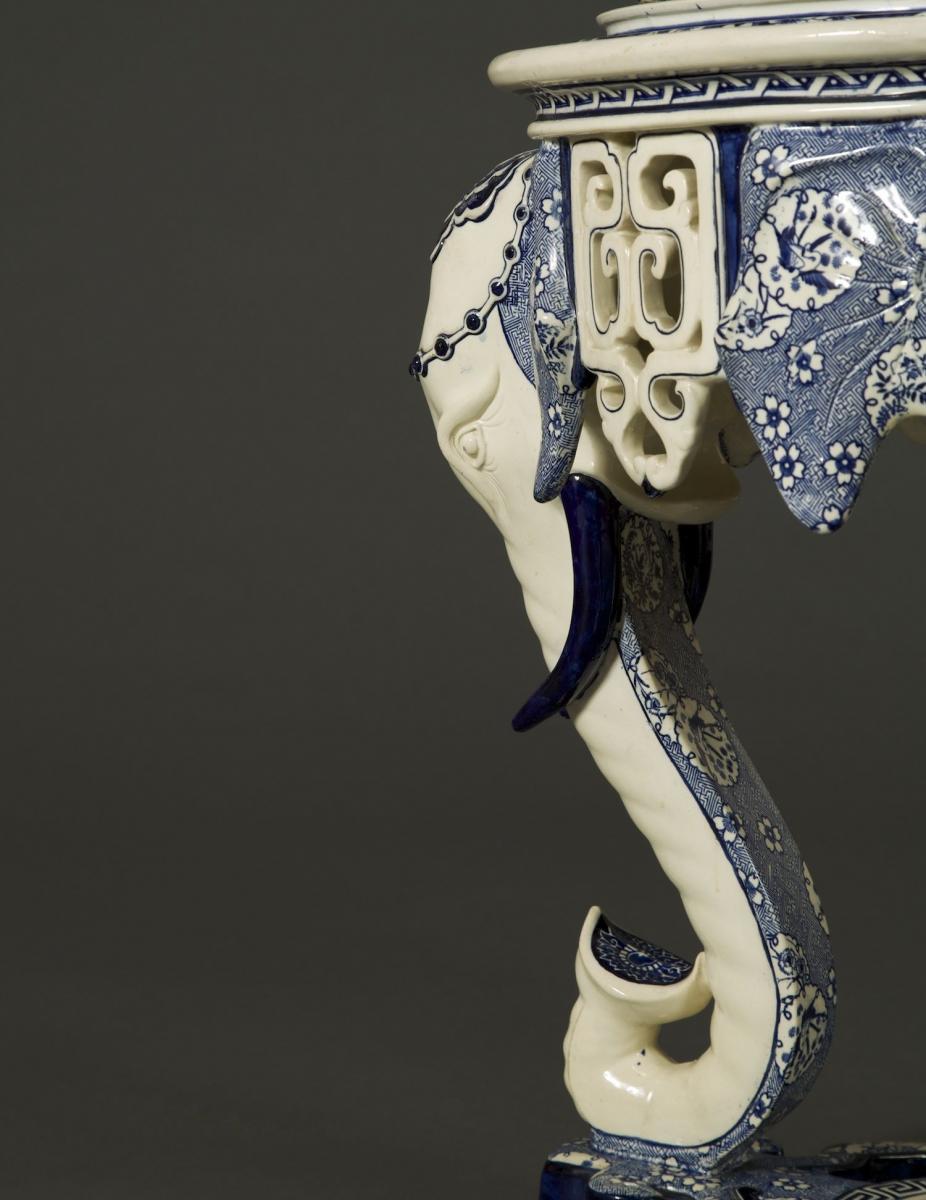 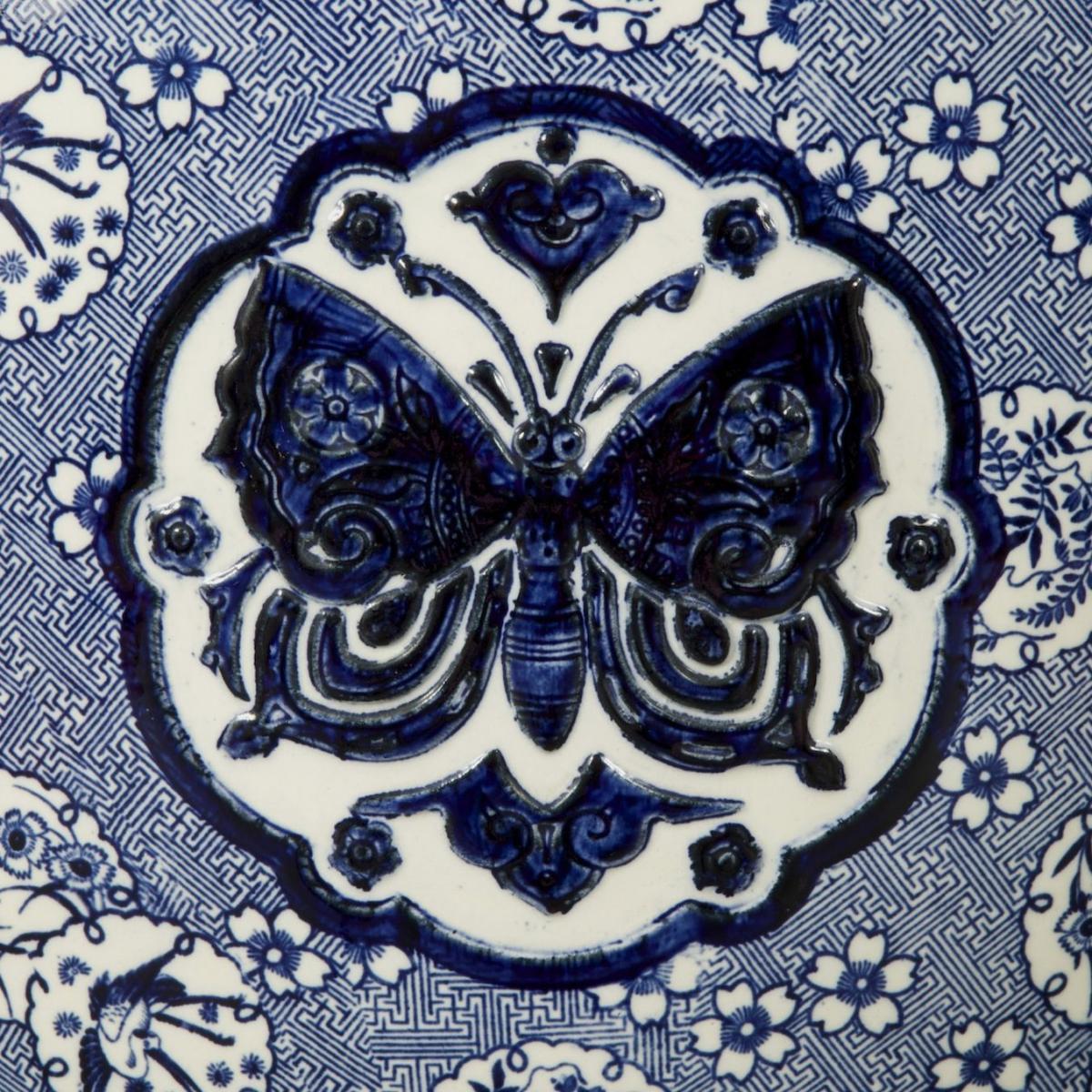 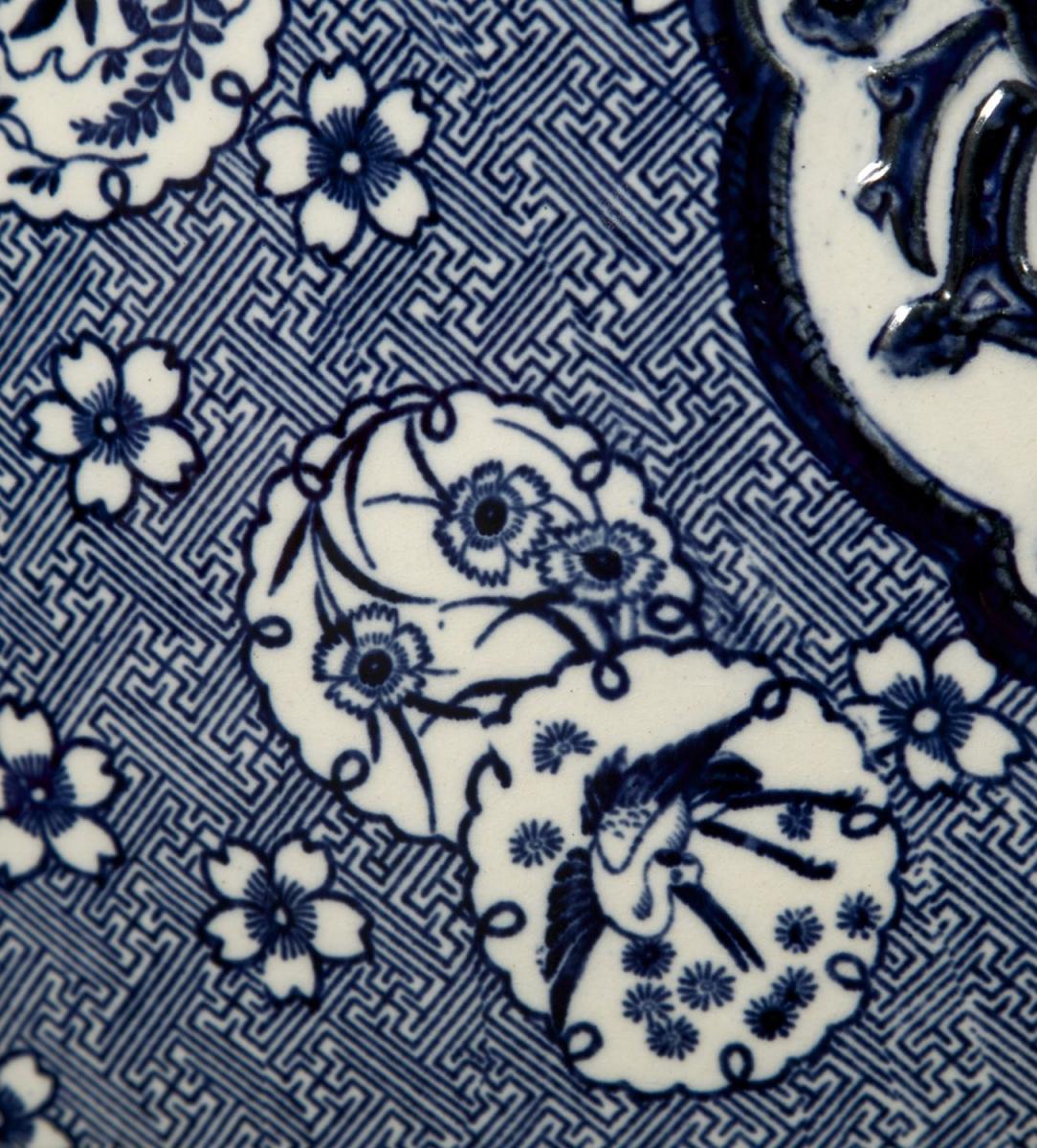 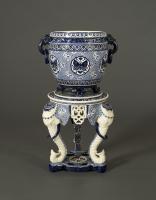 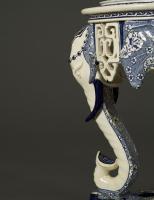 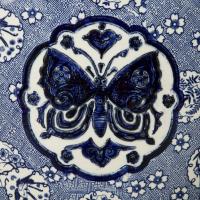 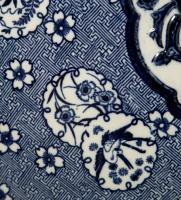 Of majolica. Each vase upper section of globular form and decorated with the Minton pattern No. 1643 G, centered by butterflies within shaped roundels and mounted to the sides with a pair of koi fish head and ring handles. The feet of scrolling chinoiserie pattern. The stands with circular stepped tops are each supported by three massive elephant heads with upturned trunk, divided at the apron by a pierced Chinese character "Lu". The whole supported by a complex fretted stretcher. In excellent condition; the ends of the tusks restored.

In the last decade of the 18th century, several events transpired which changed the face of the English pottery industry. The death of leading industrialist Josiah Wedgwood in 1795 marked the end of his firm’s domination in the field, making room for a new market leader. Additionally, Josiah Spode II, who had taken over the Spode company upon his father’s death in 1797, successfully developed and marketed bone china, a material that “was to supersede all the variants of soft paste and hard paste wares developed in the eighteenth century.”1 It was also around 1796 that Thomas Minton founded his eponymous workshop.

In his earlier career, Thomas Minton (1766-1836) had worked for Thomas Turner at the Caughley factory in Shropshire as an engraver. It was there that he is reputed to have designed the famous Willow pattern, a chinoiserie vignette applied to ceramics by transfer printing that was copied by a number of potteries and can still be found in use today. He moved to London soon after to work as an engraver for Josiah Spode I. After marrying in 1789, Minton relocated to Stoke-on-Trent where he entered a partnership with the Liverpool merchant Thomas Pownall and the potter Joseph Poulson. By 1796 the firm was producing its first wares, blue-printed and cream-colored earthenware, and around 1800 bone china production was introduced, widely expanding their range of production.

By 1816 “several important changes had taken place in the management of the firm.”2 Both of Minton’s associates had died, Poulson in 1808 and Pownall in 1814, and he took his two eldest sons, Thomas Webb and Herbert, into partnership. Thomas Webb left the business to take Holy Orders some years later, however, Herbert became an influential presence in the firm and would go on to not only succeed his father as head of the company, but to become “a figure of the greatest importance in the history of the industry.”3 Herbert was also a model of benevolence in his community, funding the construction of the local church, building employee housing, and supporting public baths, the library, and the School of Art in Stoke.4 He encouraged technical and stylistic innovation and “the increased output of every kind of pottery and porcelain attracted skilled workmen from other longer established potteries”5 to his firm.

One of the most significant business decisions made by Herbert Minton was to appoint the French potter Léon Arnoux (c. 1816-1902) as Chemist and Art Director in 1849, a post he held until his retirement in 1892. Arnoux brought a creative and experimental approach to the technical aspect of the business and he pioneered the use of thickly-glazed and painted earthenware called majolica (anglicizing the 16th century Italian term for tin-glazed earthenware, maiolica). This type of pottery, particularly well suited to large objects such as umbrella stands and pedestals, was first exhibited by Minton at the 1851 Great Exhibition and brought the firm “great profit as well as much favorable publicity.”6 Minton’s Victorian majolica wares were distinguished by their use of bold colors and strong sculptural details, and their stand at the Great Exhibition was praised by contemporaries like the architect Matthew Digby Wyatt, who stated: “so free and original is Mr. Minton’s version of majolica ware, that we can scarcely refuse to it the merit of great novelty.”7 Arnoux was also instrumental in attracting important European artists and designers to the firm, including Emile Jeannest, Marc-Louis Solon, and Albert Carrier de Belleuse.

In what would prove to be another wise maneuver, Herbert Minton took his nephew, Colin Minton Campbell, into the business as a partner in 1845, and it was he who presided over the firm upon Herbert’s death in 1858. Like his uncle, Campbell was ambitious and innovative, and an advocate of art education. He developed the tile-making portion of the business, kept up to date on technological advances, and presided over the creation of the Minton Art Pottery Studio in Kensington Gore, which educated and employed students from the national art schools in the decoration of blank wares sent from Stoke. The school also enlisted a number of artists, including Henry Stacy Marks, John Moyr Smith and Christopher Dresser. Campbell also continued to promote the firm through international exhibitions, while also expanding the number of special commissions taken on, as well as retailer outlets to carry their wares. Interestingly, one such company, Davis Collamore & Co. of New York, appears in the catalog for the Pedestal Fund Art Loan Exhibition of 1883 at the National Academy of Design as having lent a 'Minton faïance pot' and 'Minton elephant flower stand' (catalog nos. 851 and 852).

Furthermore, Campbell supported Léon Arnoux’s considerable interest in the arts of the East. Chinese ceramics continued to influence European taste as they had in previous centuries and “from the 1850s onwards Chinese styles proliferated, in bone china, Parian and, above all, majolica.”8 However, growing interest in Japanese styles, particularly after the country’s displays at the 1862 International Exhibition, presented Minton with new supply of decorative motifs and an eager market.

The present pair of jardinières on pedestals blends various Eastern design elements. The shape of the jardinieres appears to be inspired by Chinese incense burners, with handles formed as koi fish heads spouting water as if a fountain. Koi fish are strongly symbolic in Japanese culture, being associated with strength and perseverance. The original drawing for the present jardinière model is held in the Minton archives, and a list of ornamental shapes from the archives reproduced in Appendix E of the book Minton: The First Two Hundred Years (Jones, 1993), describes this model, No. 1797, as follows: “Vase, butterfly embossed, loop and ring handles (M)," indicating that it was intended for production in majolica. The present jardinieres each bear the impressed 1797 mark, as well as an impressed date cypher for the year 1882. A page from the Art Pottery Studio book, circa 1872, depicts various jardiniere shapes intended for decoration, including a version of the present model (figure 1).

The bodies of the present jardinières are decorated with the Minton pattern No. 1643 G, used mainly for dinnerware and tiles. A group of four tiles decorated in this pattern, one with a design registration mark for 3 July 1878, is held in the British Museum (figure 2), and it appears on sheet 16 in Minton’s illustrated Catalog of Enamelled Tiles, circa 1885 (figure 3). Some examples of other known pieces employing this pattern also bear contemporary date ciphers including an oyster plate (1881) and a set of six dishes with platter (1883). The pattern is nearly identical to a printed art fabric produced by Liberty textile company called 'Mooltan,' which was exhibited by Thomas Wardle in the British India Pavillion at the Paris Universal Exhibition of 1878 (figure 4). A further variant was devised by Thomas Jeckyll in the 1870s and is incorporated into his Aesthetic Movement designs.

As mentioned above, each jardinière is centered on both sides by a butterfly, a motif adopted from Japanese design and most compellingly associated with the work of Christopher Dresser. Dresser was a designer, botanist and theorist, and his work was inspired, in part, by the arts of the East, particularly Japan. In a lecture given at the Society of Arts in 1874, entitled Eastern Art, and its Influence on European Manufactures and Taste, Dresser asserts that “much of what we regard as Eastern ornament is more than mere ornament, inasmuch as it is the expression of a poetic thought, or a beautiful idea.”9 He goes on to say “that Oriental art has materially influenced, and that it still is influencing, European taste and manufactures. To me it appears that this influence is highly favourable, and that if we were quick in perceiving novelties, cunning in appropriating ideas, and clever at giving newness to old forms, we might derive the greatest possible advantages from considering and collecting Oriental examples.”10 His highly influential 1882 publication Japan: Its Architecture, Art, and Art Manufactures "helped perpetuate the fashion for japonisme in the last decades of the nineteenth century.”11 During his tenure at Minton, Dresser worked as both an advisor and designer, and a number of registered designs from the 1870s include similar butterflies to the present examples. Additionally, the repeating image of the stork on the body of the jardinière is comparable to a “native illustration” included in Japan: Its Architecture, Art, and Art Manufactures (figure 5) as well as Dresser’s Japanese stork design “widely used by Minton on tiles, tableware, and ornaments”12 (figure 6).

The present tripod pedestals are each formed of three elephant heads. In Eastern mythology, the elephant was venerated as a symbol of strength and wisdom, and the image was used for several ornamental wares produced by Minton between the 1860s and the 1890s. The majority of these were made in majolica, most famously in a massive pair of elephants made for the 1889 Paris Exposition, standing at over 6 feet high. Each of the present pedestals bears a date cypher for 1883. They are similarly decorated with Minton's pattern No. 1643 G, as well as floral and Chinese meander patterns. The bases are centered by the Chinese character "Lu," generally translated as "prosperity." An undecorated example of this model is depicted in The Dictionary of Minton (figure 7), described as a “pedestal for conservatory use, designed for production in majolica c. 1885,”13 however, the marks of the present pair can confirm that the design was in use slightly earlier. Each pedestal is numbered 2157, and the corresponding description in Mintons' list of ornamental shapes reads: "Pedestal, pierced elephant head supports (M)."

Majolica jardinières, pedestals and garden ornaments were particularly popular in conjunction with the growing fashion in Victorian England for conservatories, glass rooms attached to the home for use as a greenhouse or sun parlor. With the increased importation of exotic plants to Britain starting in the mid-nineteenth century, as well as advances in the production of glass and cast iron, “the most stately Victorian homes boasted an 'exotic' conservatory, or glass addition, which housed Victorian botanical enthusiasts’ collections of imported tropicals from around the globe and alpine plants from the Orient.”14 This is no doubt the type of setting the present pair of jardinières and pedestals would have been acquired to furnish, particularly since the medium of majolica would have lent itself perfectly to the warm and humid conditions required by many exotic plant specimens.