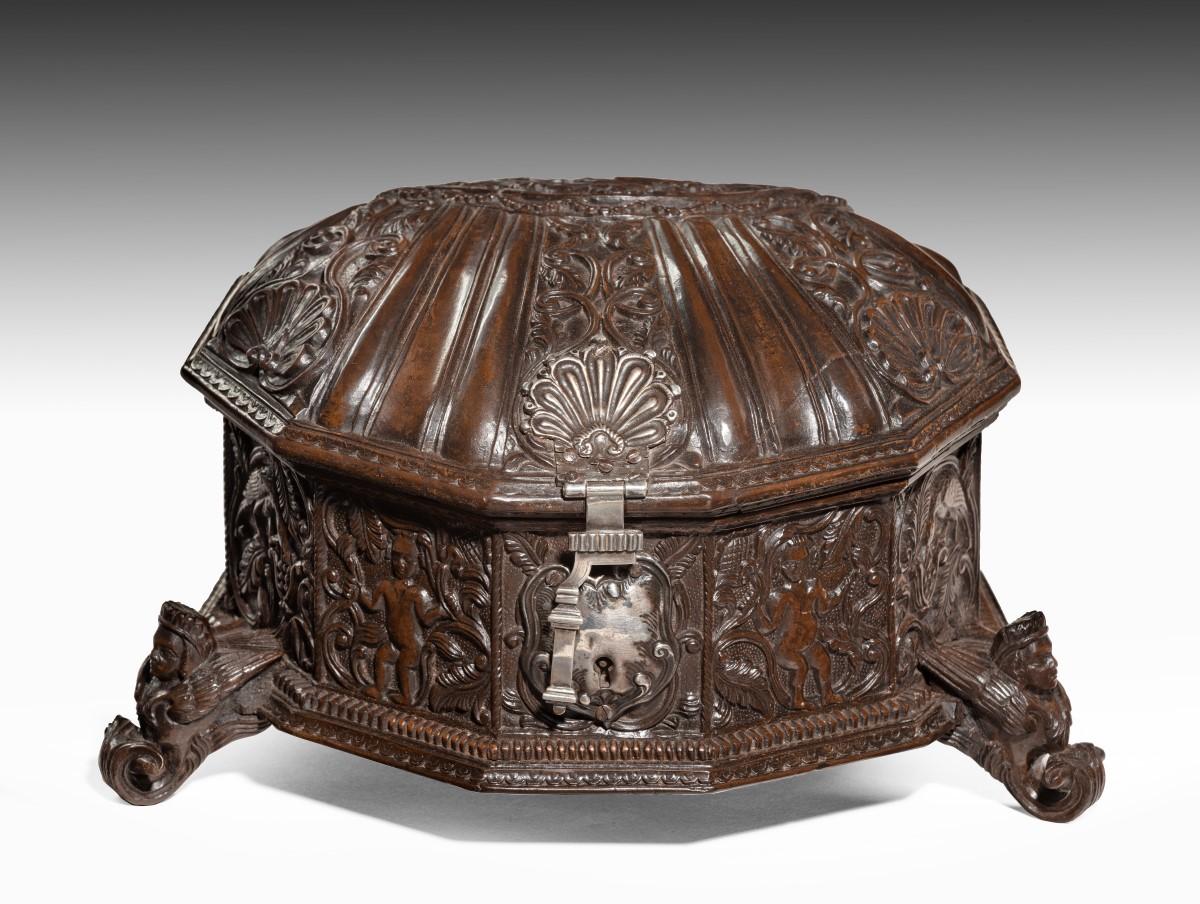 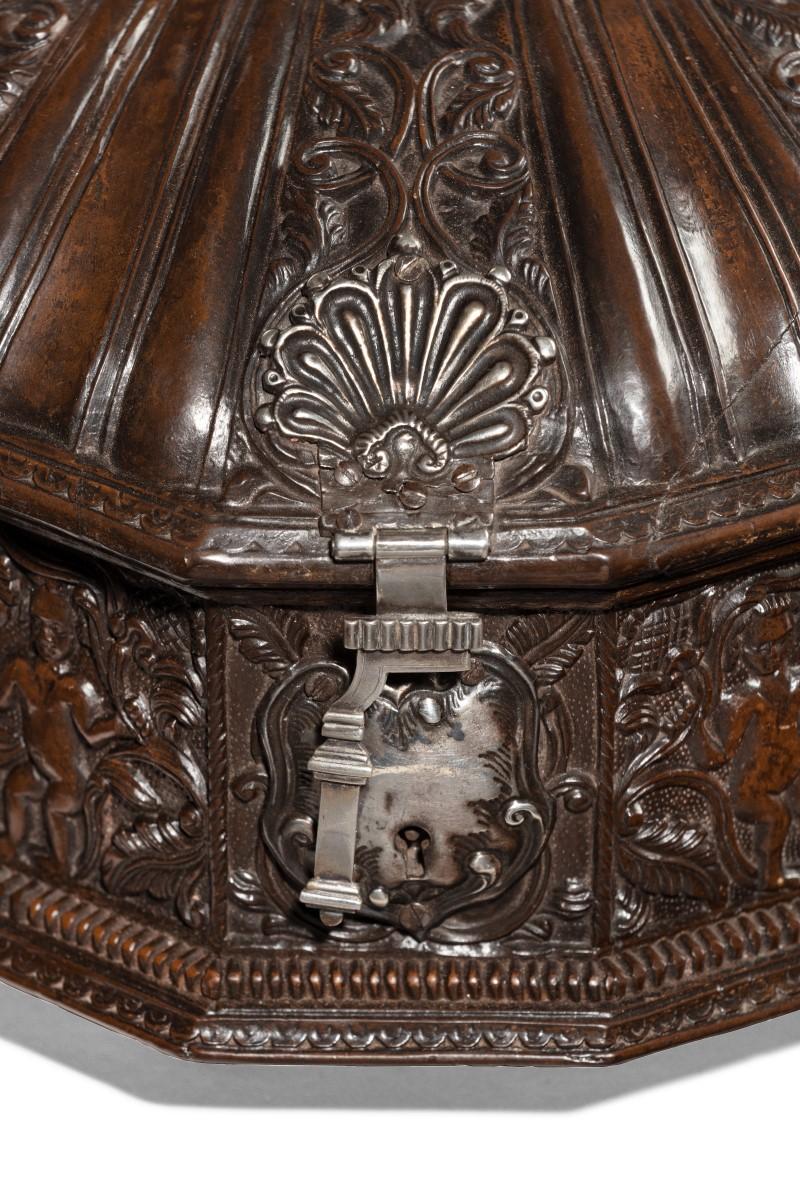 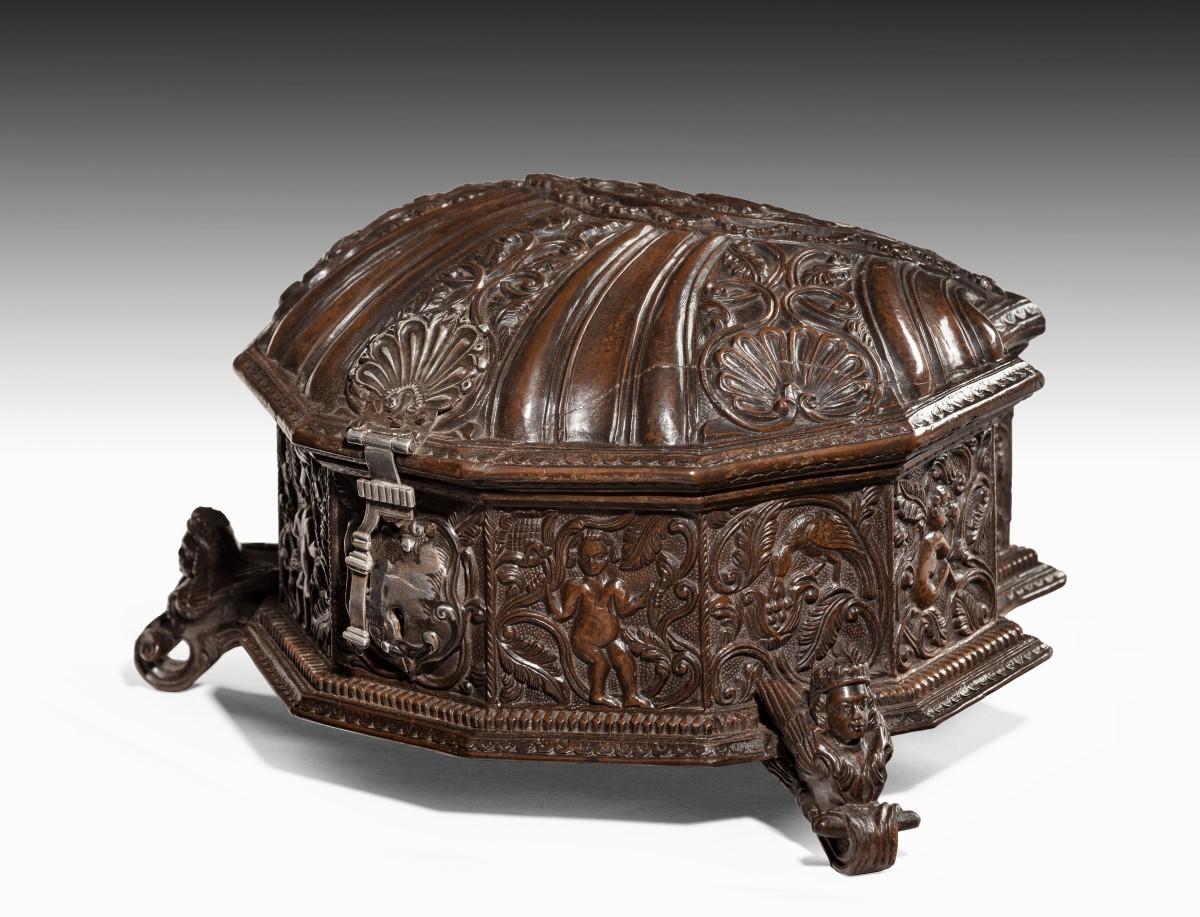 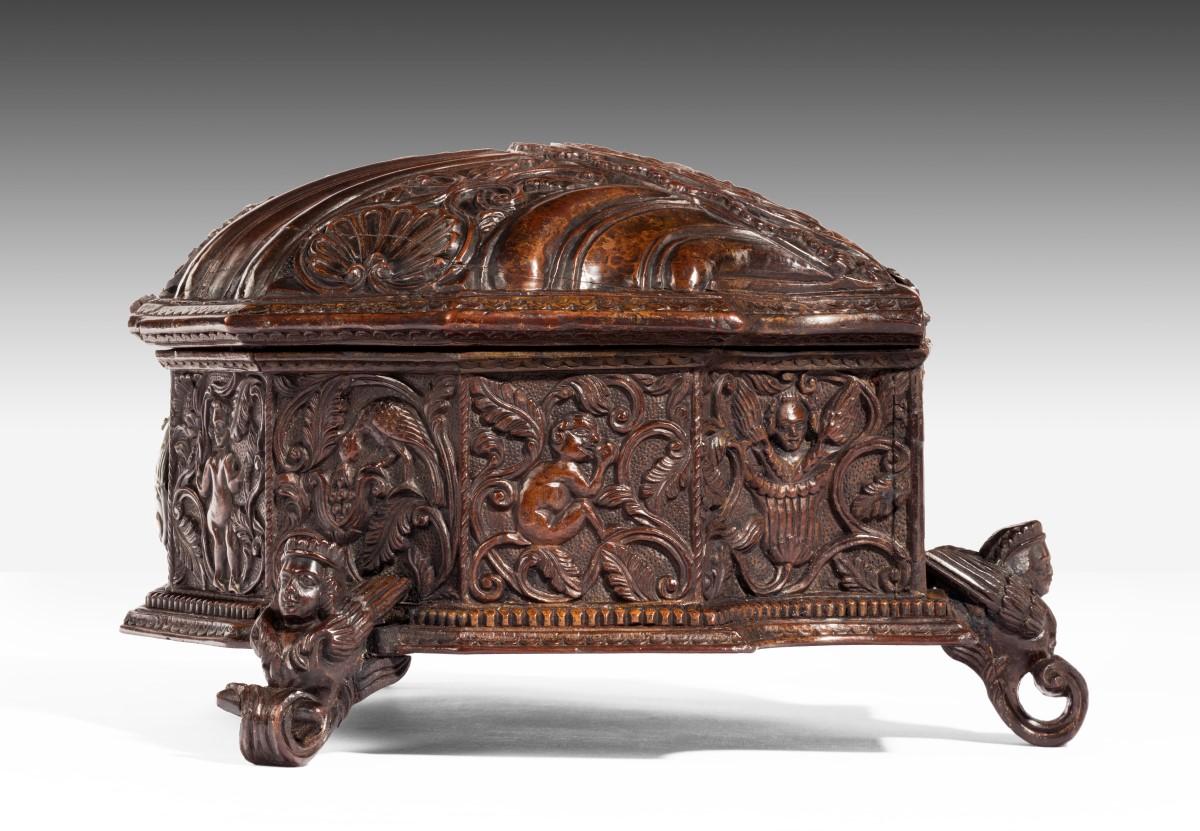 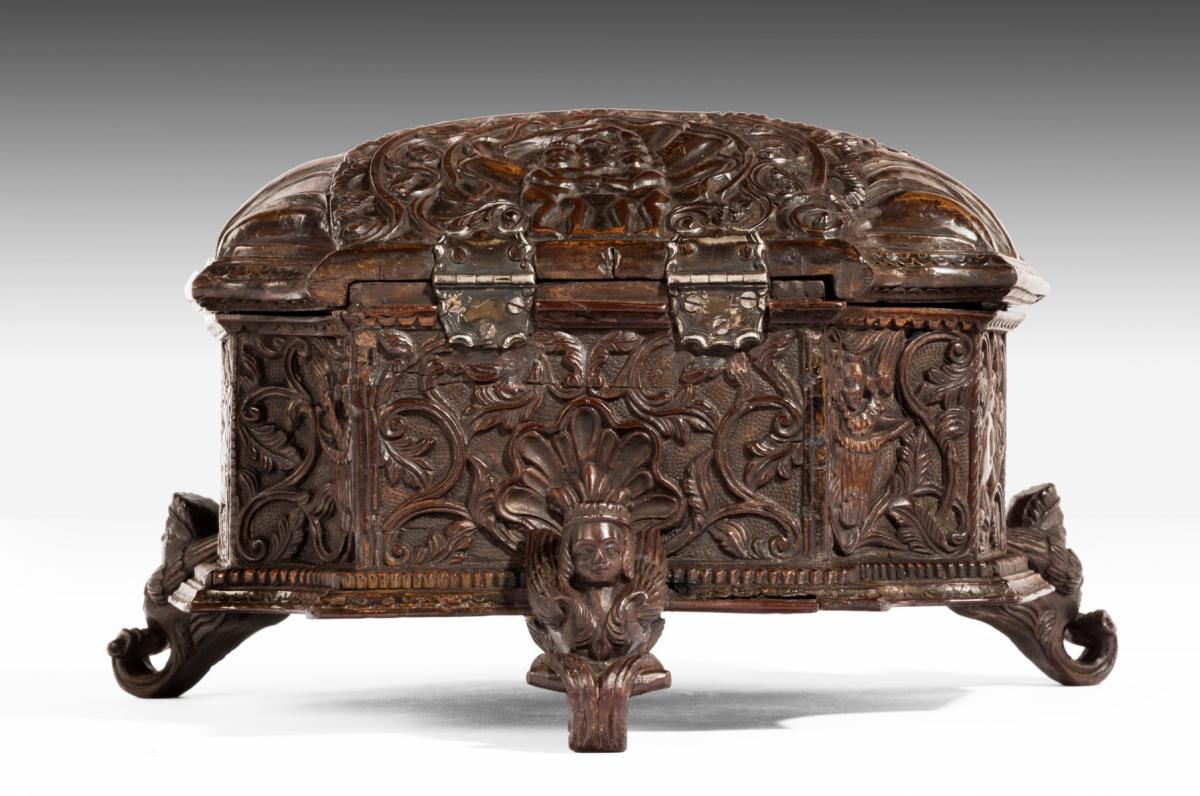 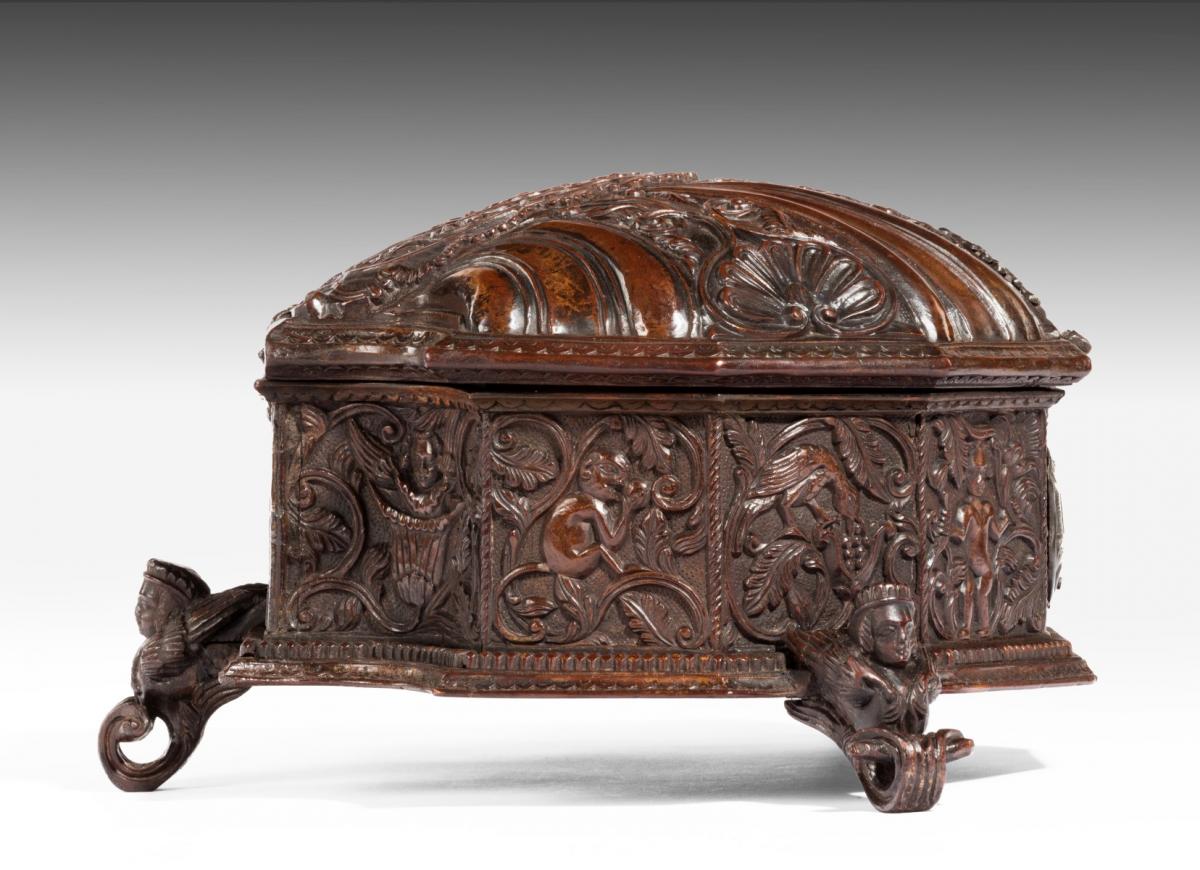 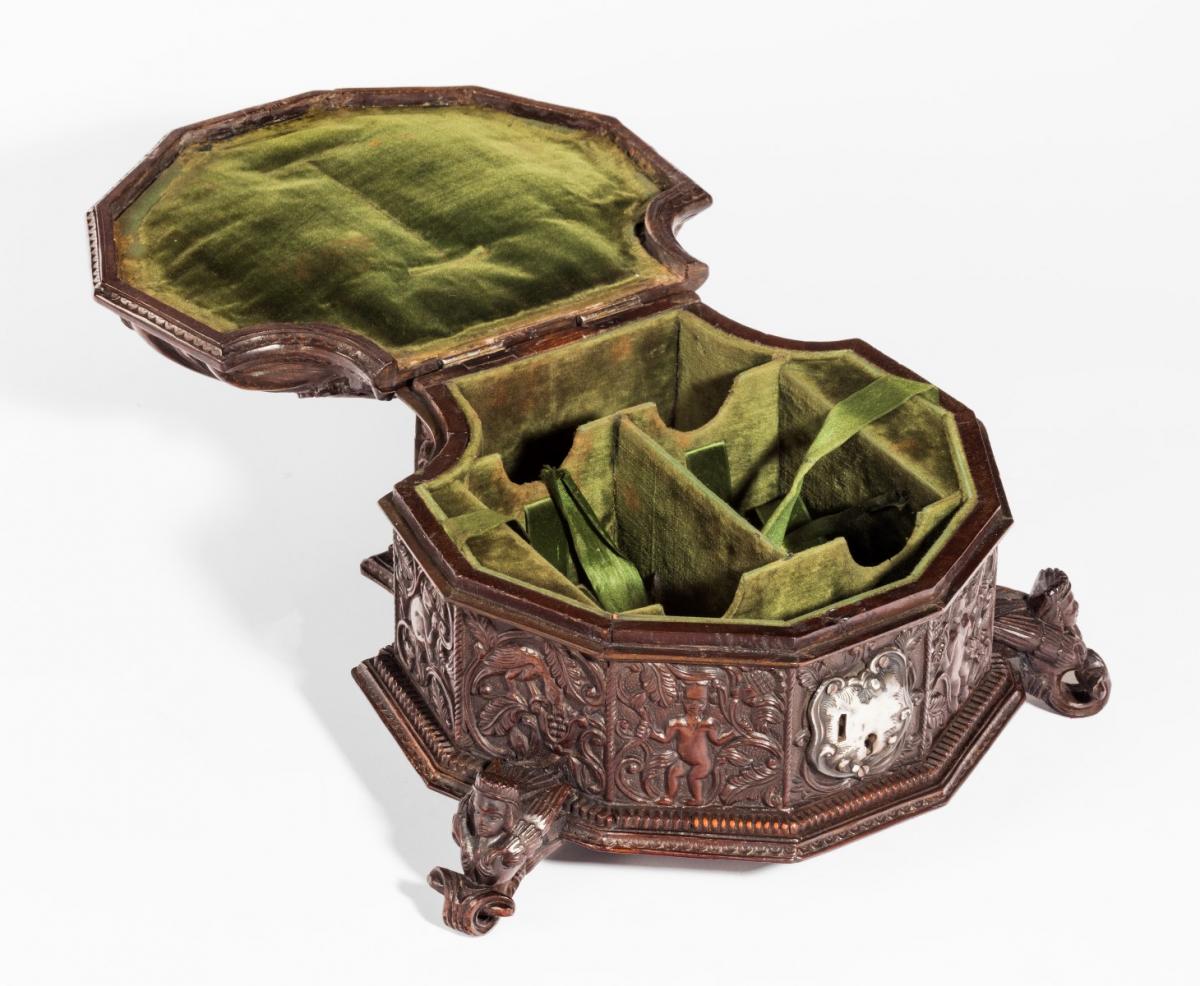 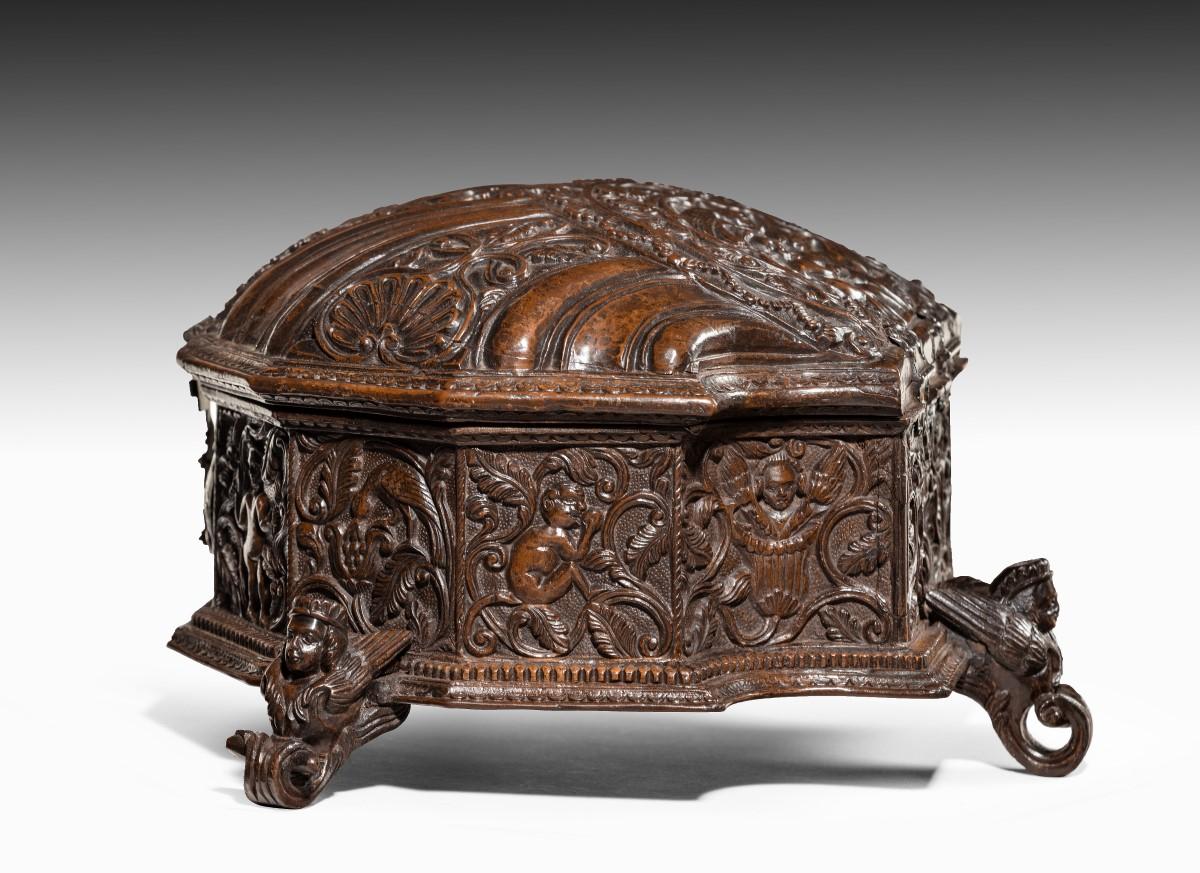 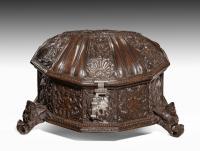 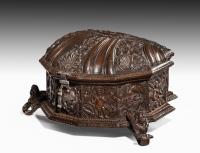 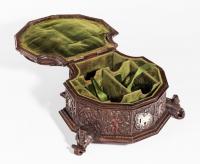 A Coca Box (Coquera) shaped in the form of a large scallop shell. The hinged cover is formed by radiating gadroons, interspersed with strips of rocaille foliate carvings. The cover is punctuated by an elaborate roundel depicting two figures surmounted by an eagle carved in relief. The sides of the box are decorated with exotic foliage motifs interspersed with putti, birds and monkeys. The box is supported by three wooden feet in the shape of mythological female creatures and scrolls. The interior compartments lined in green velvet. With silver hinges. Hasp replaced.

This coquera would typically have been used to store coca leaves, which were chewed in Peru before the arrival of the Spaniards and continued to be consumed in colonial times. They could also be used to store yerba maté infusions, preserves and sweets. From 1572 until the expulsion of the Jesuits in 1767, the Jesuits carried out a series of missions in Upper Peru, today known as Bolivia. As part of their missionary activities, the Jesuits organised classes in art and trade for the native peoples – the Guarani – in an attempt to convert, educate and train them in arts and crafts. Coca boxes or coqueras were made of precious metals and carved wood. The missions in Moxos and Chiquitos achieved a great deal of recognition for their woodwork and carving, and these wooden boxes would have been covered with silver leaf to resemble the more expensive gold and silver versions. The boxes were exported as luxury goods to the rest of the viceroyalty of Peru. Trade to the western Andes took place through Cochabamba and Potosí, which promoted an active cross-fertilisation of ornamental designs between the lowlands and the Altiplano. While some boxes of this type can be quite simple, the box offered here incorporates the highest quality carving, and a complex and ambitious design (See ‘The Colonial Andes: Tapestries and Silverwork, 1530-1830’, by Elena Phipps, Johanna Hecht, and Cristina Esteras Martín (The Metropolitan Museum of Art, 2004), p.342).

The green velvet lining of the interior compartments is European, and dates from the 19th Century or possibly earlier. This confirms that the coquera was made for export and would have been lined when it arrived in Europe during the 19th Century or perhaps earlier, as coqueras were not lined in this way in Alto Peru.

In ‘The Colonial Andes: Tapestries and Silverwork, 1530-1830’, Johanna Hecht notes that, unlike the silver coqueras which were made in a wide variety of forms, wooden coqueras tended to follow a design prototype: ‘the sides are densely covered with applied “cookie-cutter” relief, whose surfaces are textured with regular incisions following the form of foliate ornament, while the cockle-shell shaped hinged cover is formed by radiating gadroons … [which can be]… lent variety by other designs that are interspersed among the plain convex tongues, such as strips of rocaille foliate carving.’ Hecht illustrates a comparable coquera of similar design, also believed to originate from Moxos or Chiquitos and dated circa 1775, which is housed in the collection of the Museo de Arte de Lima. She comments that: ‘Most wood coqueras are either flat or stand on silver ball-feet. The distinctive aspect of this piece lies in the integration of its four wooden feet, formed of winged cherubs’ (ibid, p.342). Our coquera shares this unusual form, being supported by three wooden feet in the shape of mythological female creatures.

In ‘The Colonial Andes: Tapestries and Silverwork, 1530-1830’, Cristina Esteras Martín notes that: ‘[b]oxes used for storing cocoa usually contained at least one space set aside for lime, and those intended for storing yerba maté usually had four interior compartments: the largest for the maté, the a second for sugar, and two smaller ones for cinnamon and clove or orange peel, all of which were considered necessary for enhancing the flavor of native maté.’ (ibid, p.342). As a result, the interior compartments within our coquera suggest that it might have been a yerbera (or yerbera box).

The form of our coquera was probably inspired by earlier silver spice boxes such as the scallop-shaped spice box housed in the collection of the Metropolitan Museum, New York, which is dated circa 1602/3 – see adjacent image; www.metmuseum.org/art/collection/search/205039.

Although shell-shaped boxes such as this are sometimes referred to as spice boxes, according to early seventeenth-century inventories, they were used for serving sugar, which was an expensive delicacy. In the seventeenth Century, an English tradition was to sweeten wine with sugar or honey, a habit which persisted through the seventeenth century.