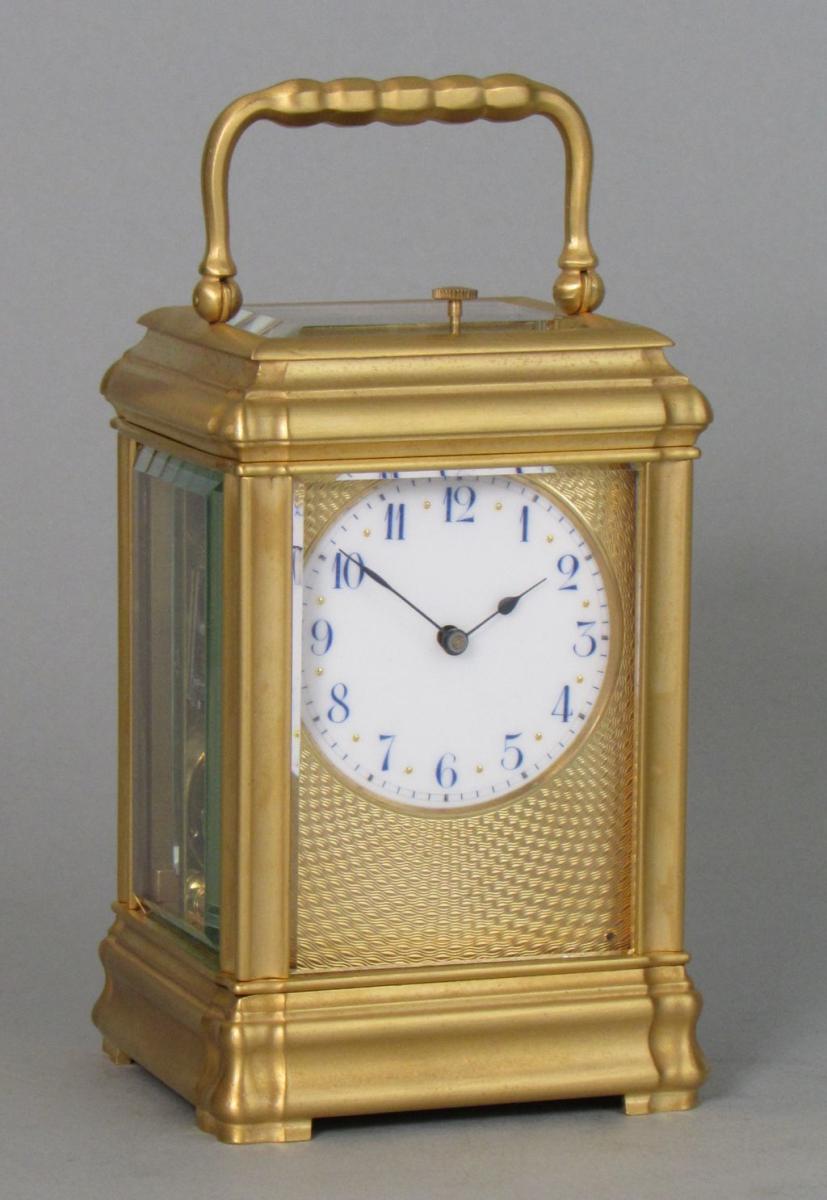 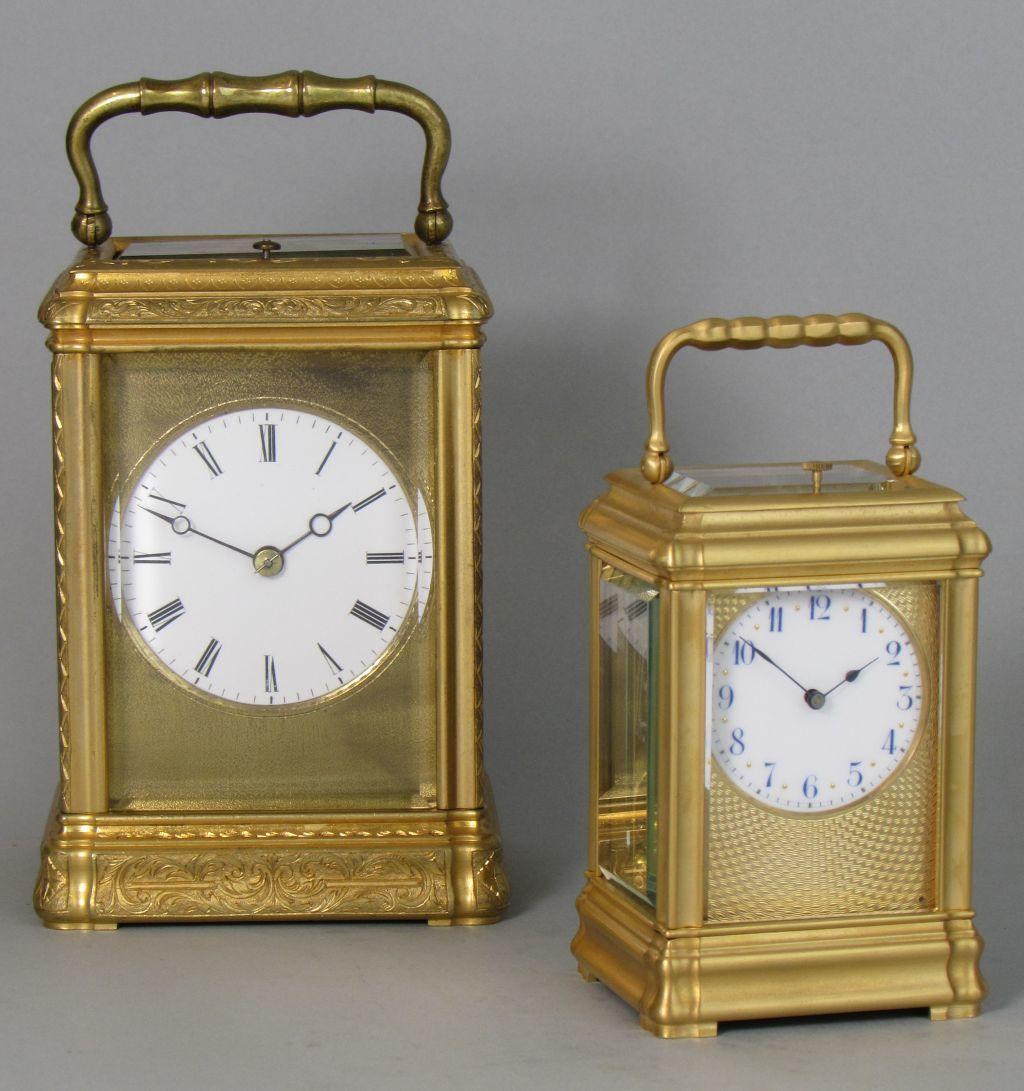 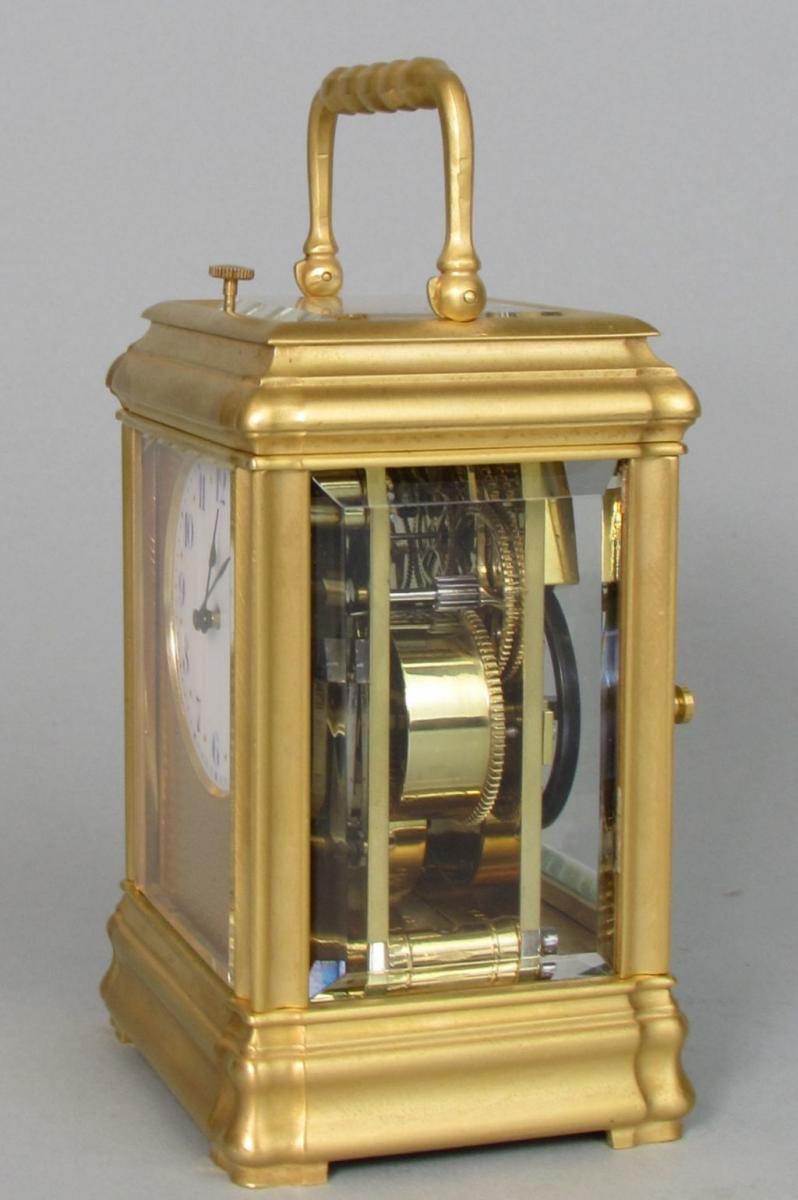 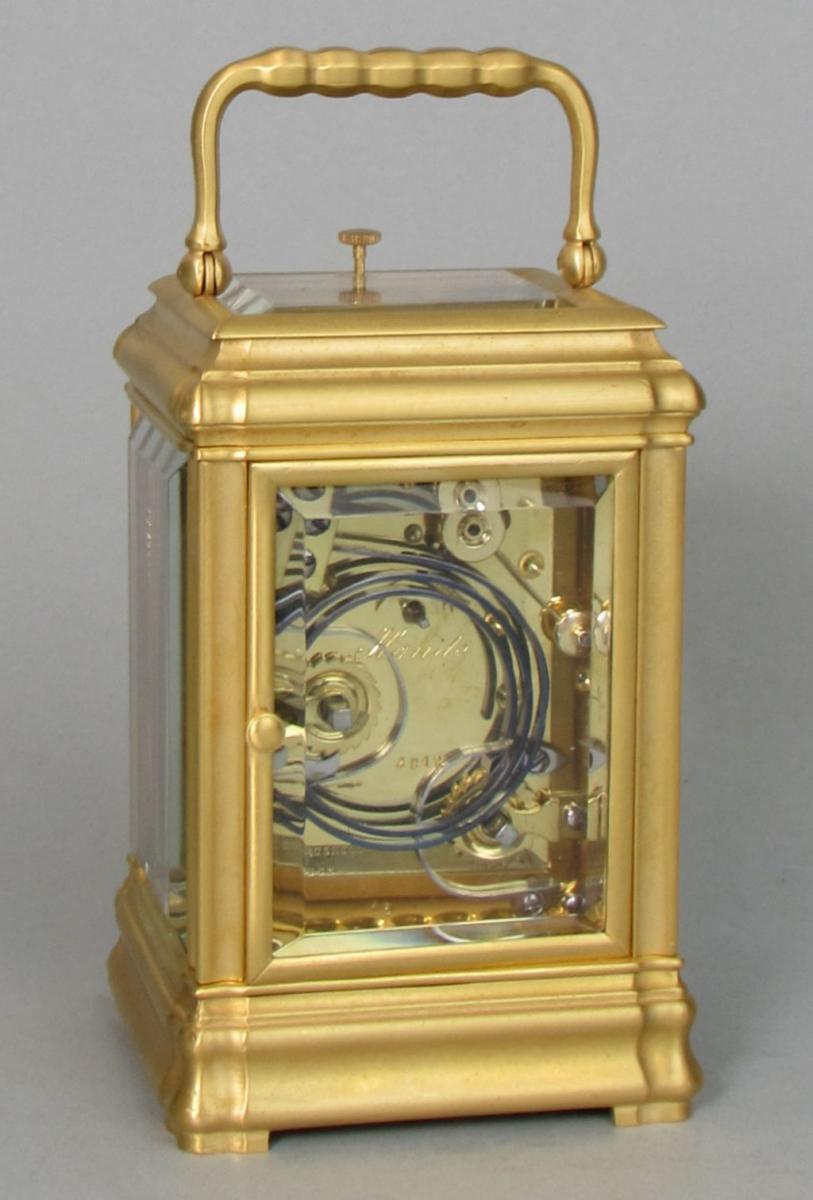 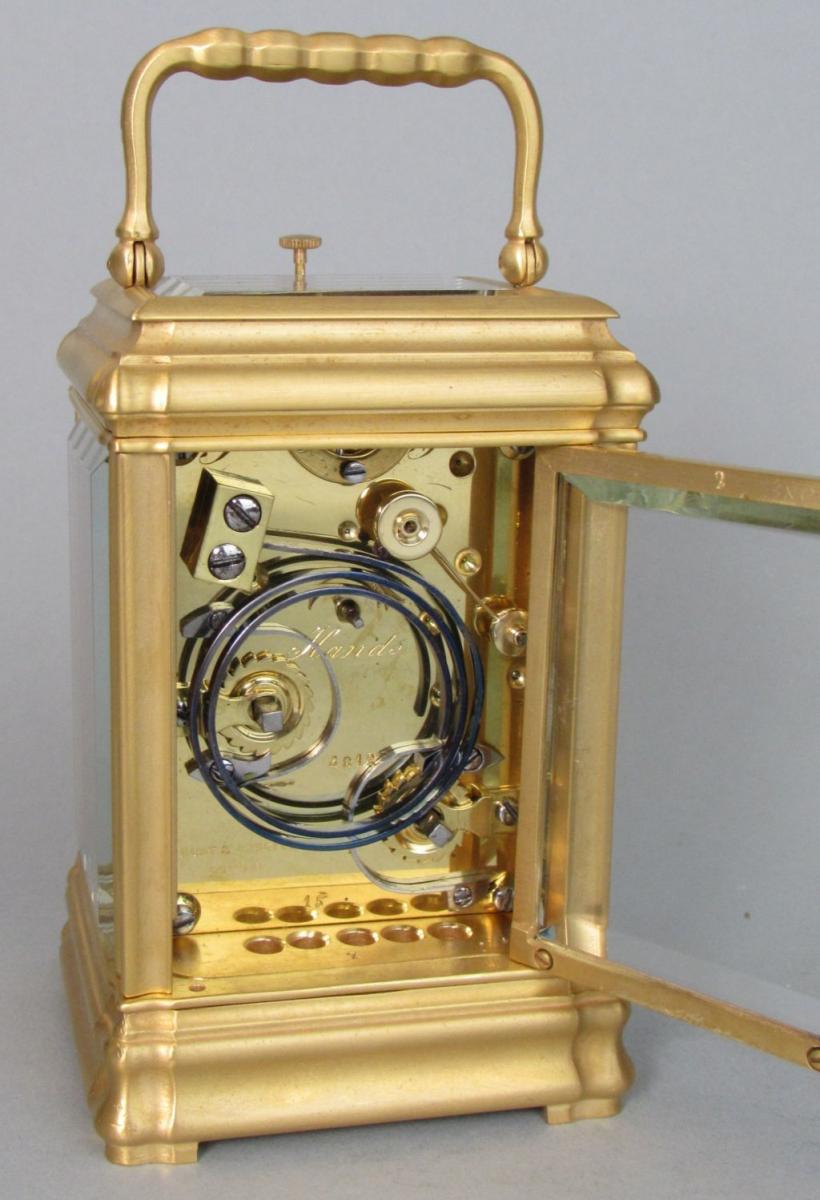 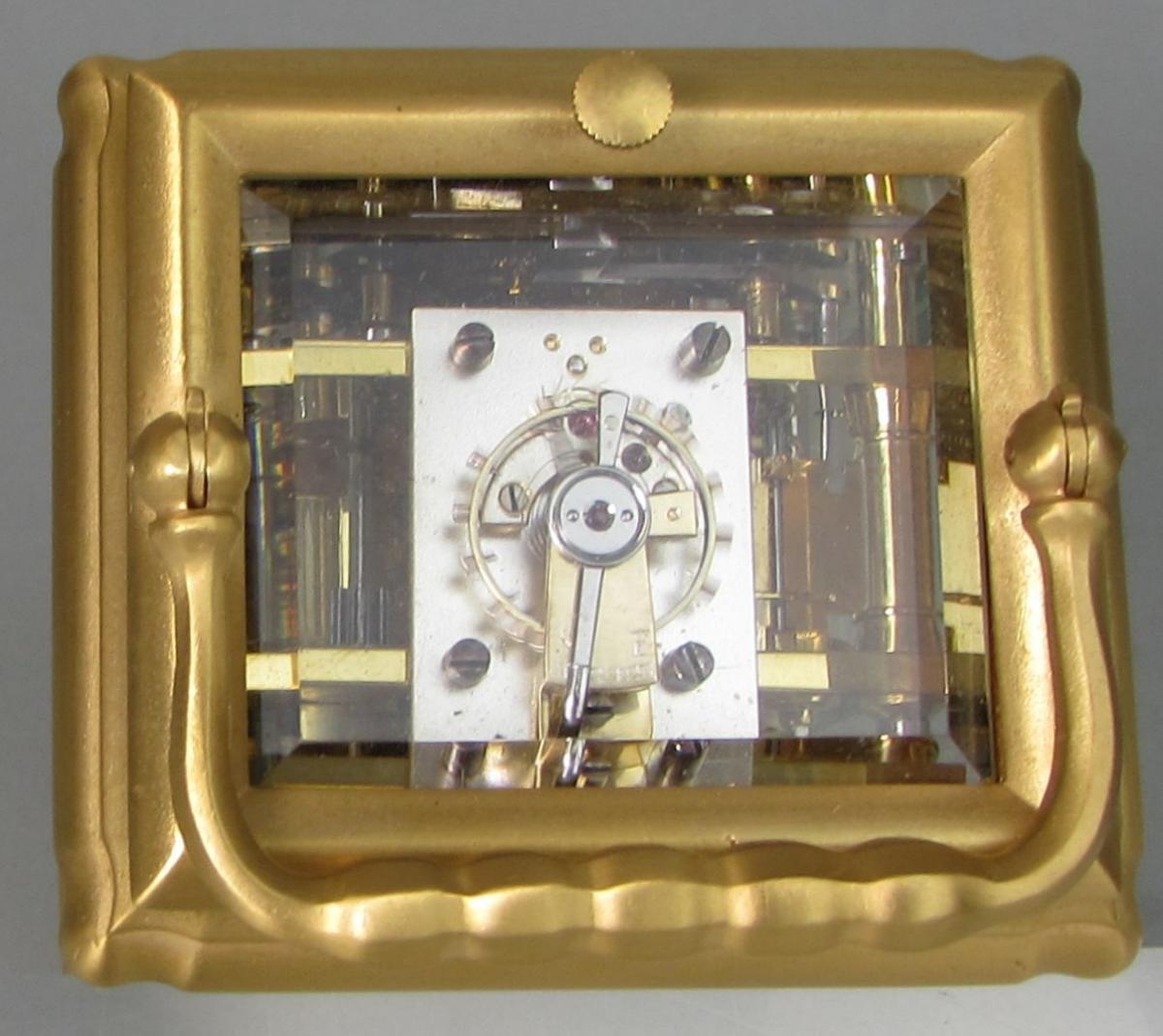 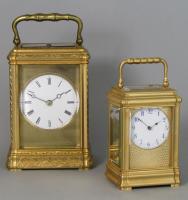 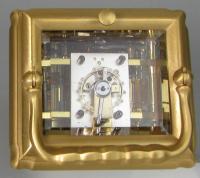 A miniature striking gorge cased carriage clock, with the platform lever escapement stamped on the underside with the maker's name Soldano and escapement number 4051 and scratched with a repeat of the movement serial number. The eight-day duration movement strikes the hours & half hours on a gong, with a repeat button to the top. The white enamel dial has blue Arabic hour numerals, gilt half hour dots, blued steel spade hands and a beautifully engine turned gilt mask. The backplate of the movement is stamped with the serial number '4812' along with the retailer's name Hunt & Roskell, London.
It is most unusual to get a carriage clock of this small size with full strike and repeat.

Joseph Soldano was known as a maker of fine carriage clocks having been awarded medals at the Paris Exhibitions of 1855 & 1878 where it was noted that '...the exhibition of this establishment showed substantial progress in the art of case decoration. On show were a group of carriage clocks ornamented with great taste and originality. The escapements appeared to us to have been treated with particular care." They are particularly well known for the high quality of their escapements which where in all probability made in Geneva, Switzerland and were often stamped, as this one is, 'Soldano' or just 'J.S.'. The well known firm of Dent's were regular customers of Soldano's during the 1860's.

Hunt & Roskell were one of the top retailers of fine clocks in Victorian London, selling amongst other things pieces made by the well-known Thomas Cole that were signed for them as well as carriage clocks made by the finest French makers including Henri Jacot.
The business developed from the original company set up by the silversmith Paul Storr in 1822 who went into partnership with Mortimer and John Samuel Hunt, under the name Storr and Mortimer retailers of Jewellery, Silver, Clocks and Watches. The business was dissolved on the 31st of December, 1838 when it was succeeded by Mortimer & Hunt along with John Hunt at 156, New Bond Street, London with a workshop at 26, Harrison Street, Grays Inn Lane. On the 26th of December, 1843 John Mortimer retired at which time Charles Hancock had become a partner and well known clockmaker Robert Roskell junior joined the firm which became Hunt & Roskell, 'Silversmiths and Jewellers to the Queen', with the same Bond Street address. In 1849 Hancock left to set up the well-known jewellers 'C.F. Hancock' becoming competition to Hunt & Roskell.
The firm exhibited at the Great Exhibition of 1851 held in the Crystal Palace, Hyde Park where they showed many clocks and watches including examples made by Cole.
J.S. Hunt died in 1865 followed by John Hunt in 1879 and the business continued with Robert Roskell, Allan Roskell and John Mortimer Hunt until the death of Robert Roskell in 1888 at which time the two remaining partners sold out to the well-known clockmaking company J.W. Benson. By 1898 the business had become Hunt & Roskell Ltd.