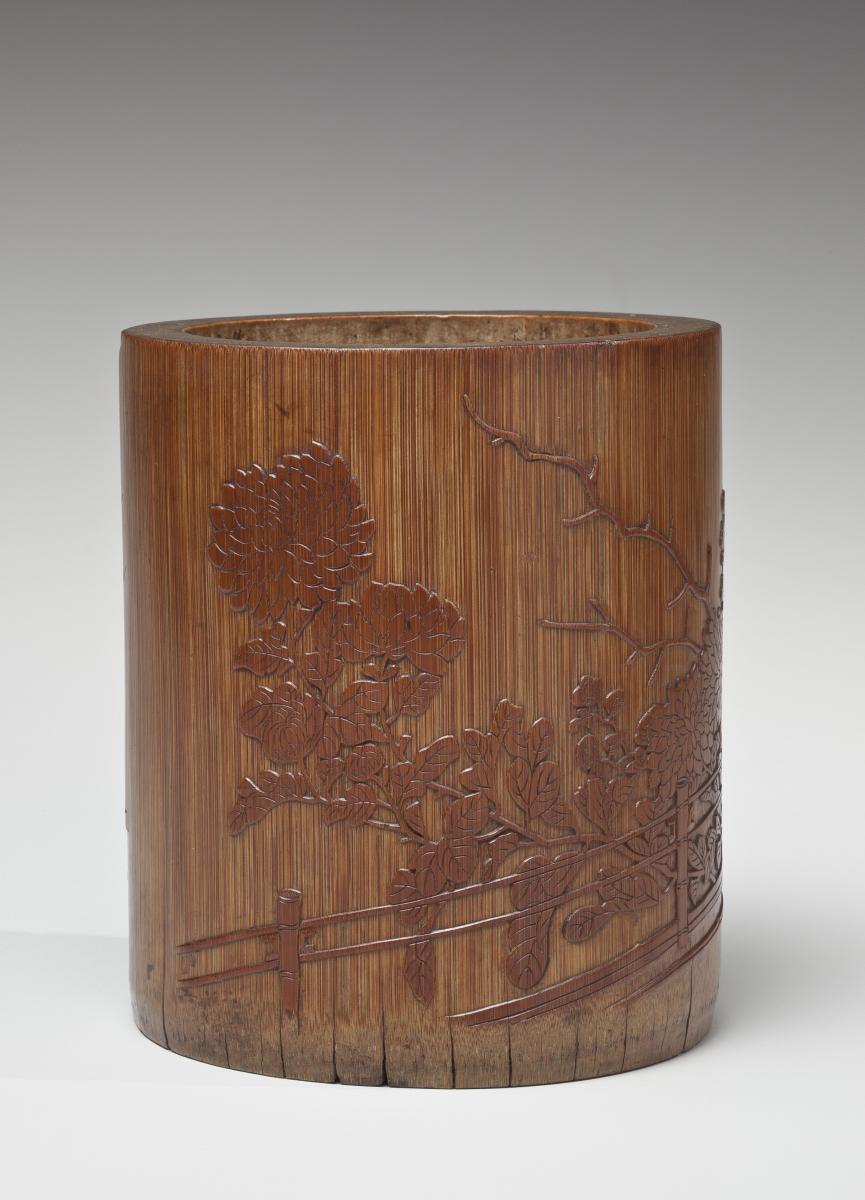 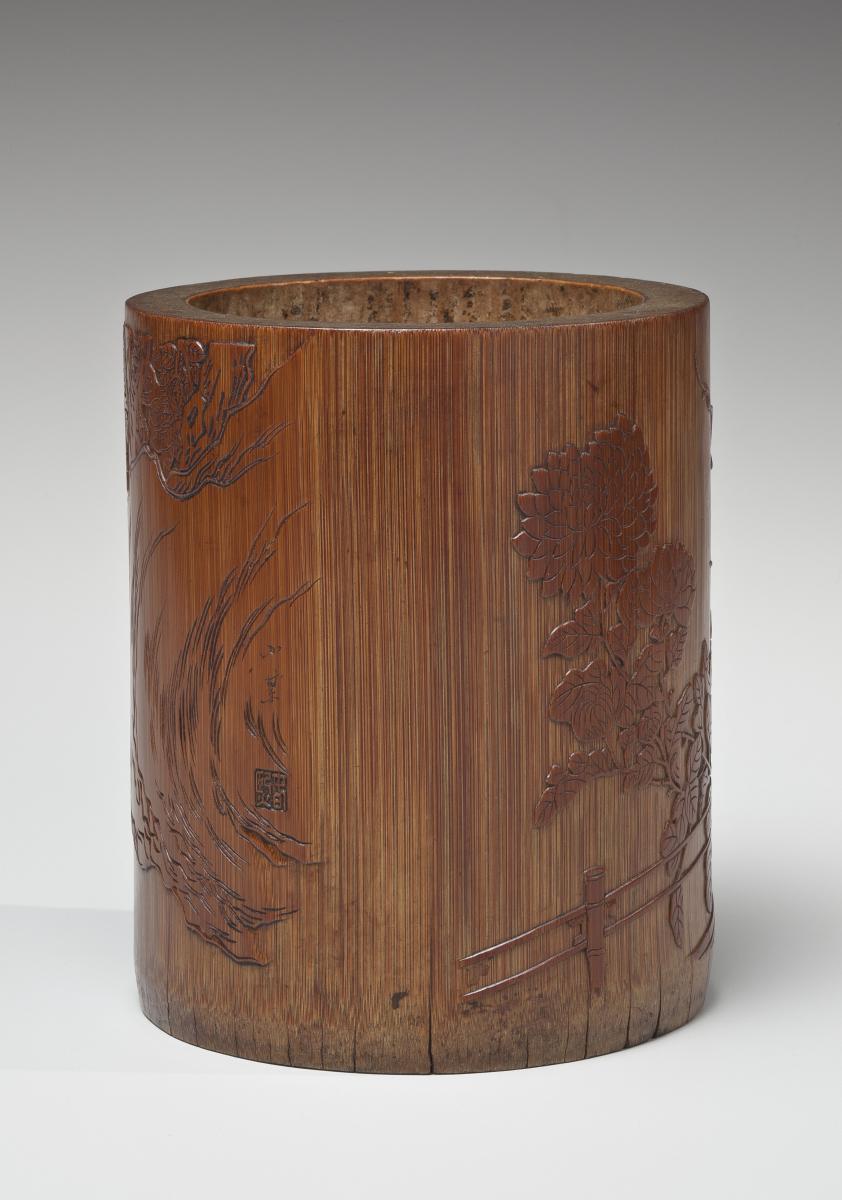 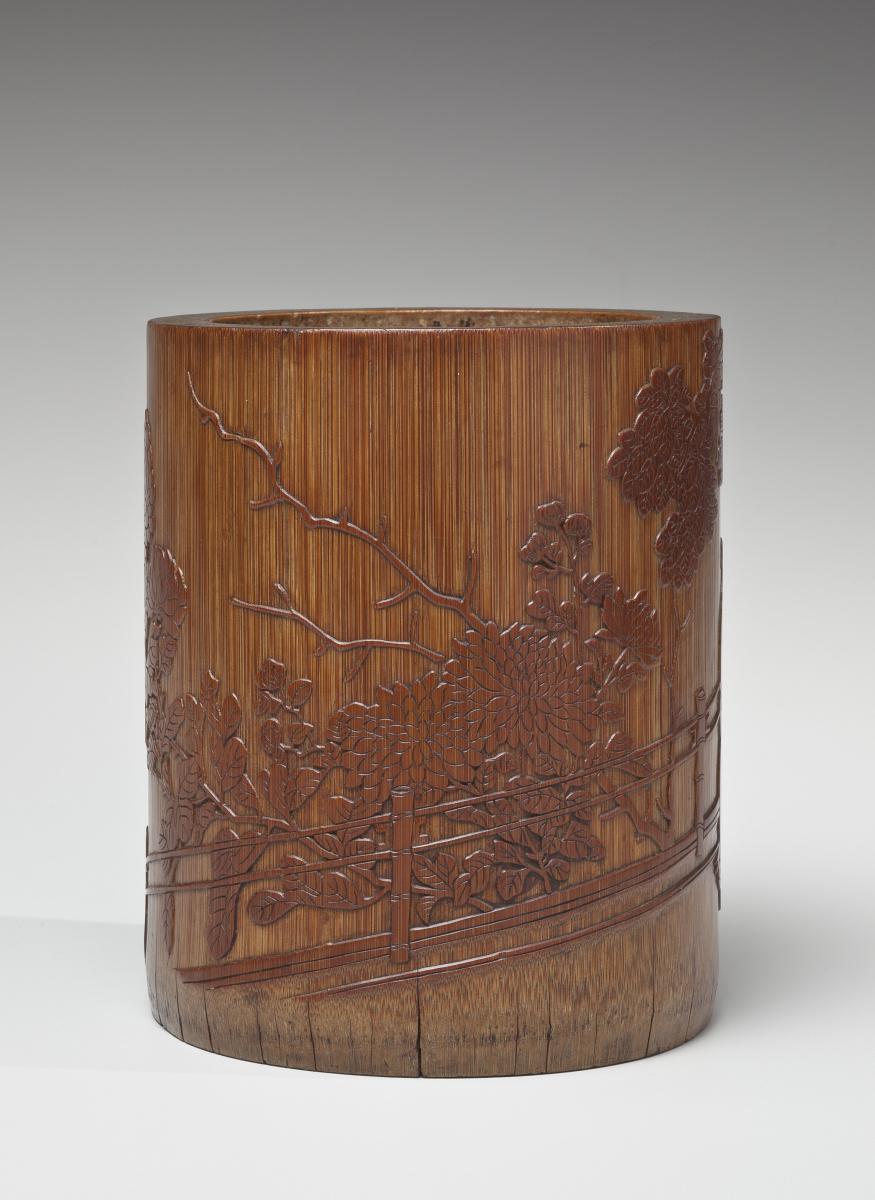 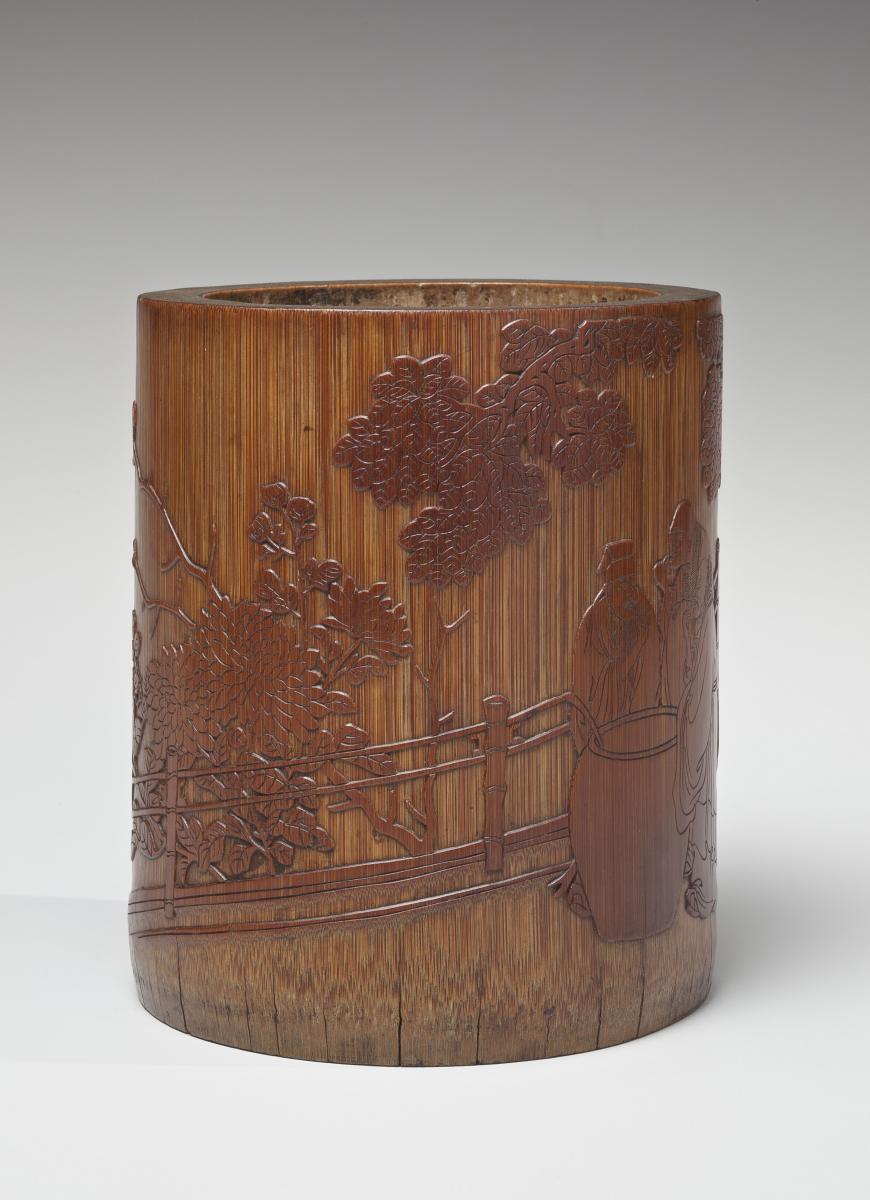 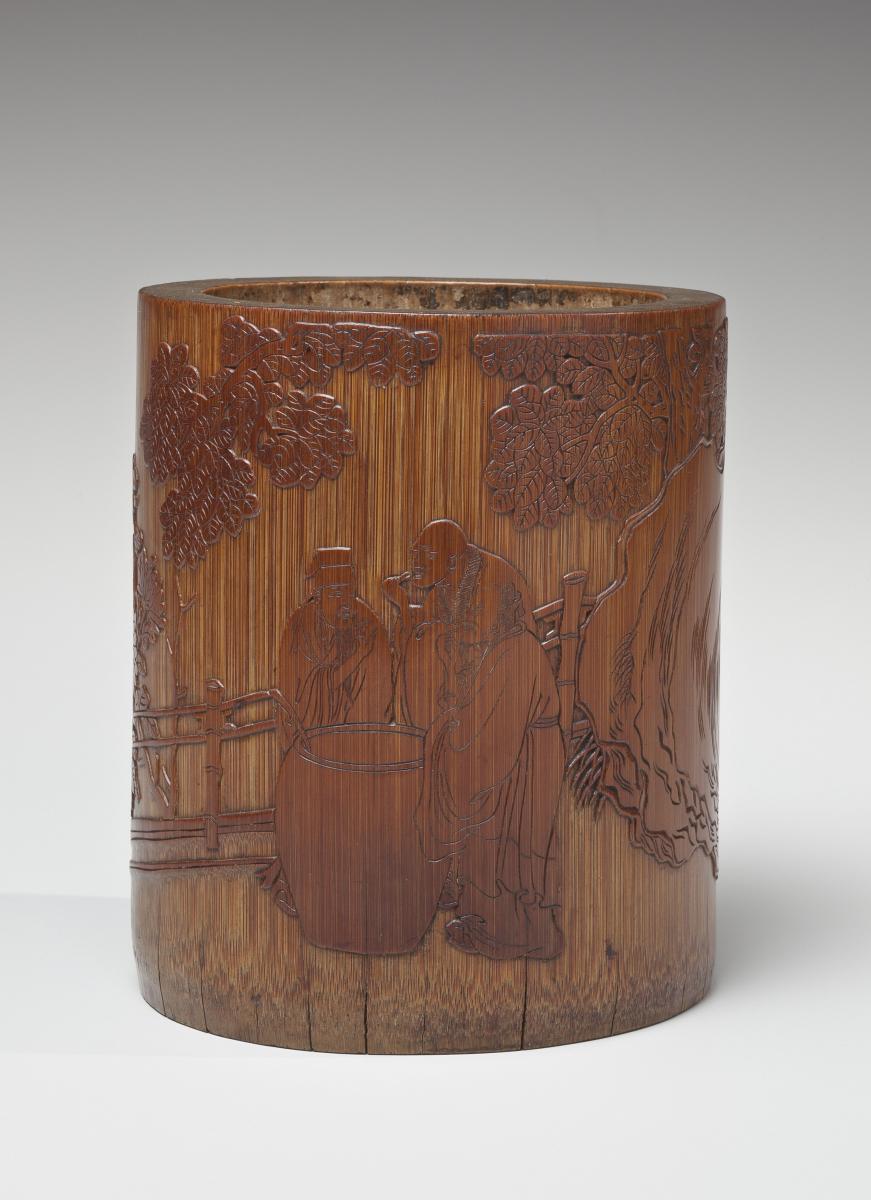 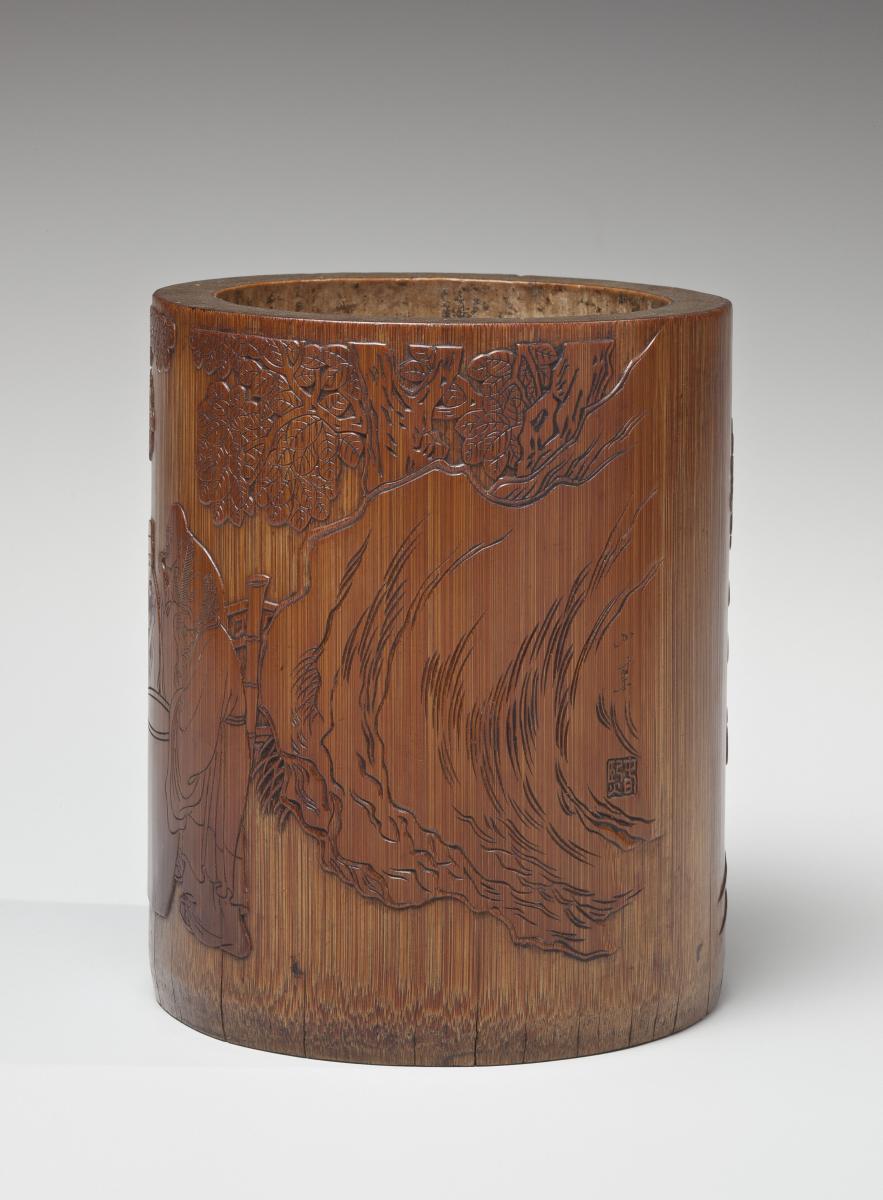 A skin carved bamboo brushpot with a scene of three figures standing around a huge wine jar on the edge of a terrace with bamboo railings a large rock to their right and an overhanging tree with further trees in the distance, signed on the rockwork Xiaomei with a square seal beneath.

The signature Xiaomei is the zi of the artist Wang Su (1794-1877). Wang Su, born in Yangzhou was a thoroughly accomplished decorative, professional painter of figures, birds and flowers, animals, insects and fish, who was also noted as a seal carver, in the  Han style. His painting style was largely derived from that of the Yangzhou “Eccentric” Hua Yan (1682-1765).

In his entry in ‘Transcending Turmoil, Painting at the Close of China’s Empire 1796-1911’, Ju-hsi Chou says of Wang Su. “The picture that emerges is of a man of simple nature whose life was tied to the city of Yangzhou, on the whole uneventful except for the brief and tragic interlude of the Taiping siege in 1853. Besides having lost everything but his immediate family, he lost in that siege his nephew who had studied the art of painting with him”. Wang may have spent a period during the last years of his life in Shanghai.

Most published works by Wang Su are figural, and the majority of these are of beauties.

Clare Lawrence pointed out, in a lecture published in the Snuff Bottle Society Journal (Summer 1993), that Wang’s name and designs were used (the only established painter to be so “borrowed”) on a group of seal school glass snuff-bottles of the highest quality that have been associated with Yangzhou at some point on the nineteenth century. He may or may not, in my opinion most likely the latter, have been personally involved in their design and manufacture, but the use of his designs as models, as is the case here with this brushpot, indicates to some degree his widespread popularity at the time.