Silver Salver of a Hero of Trafalgar: Captain Pryce Cumby 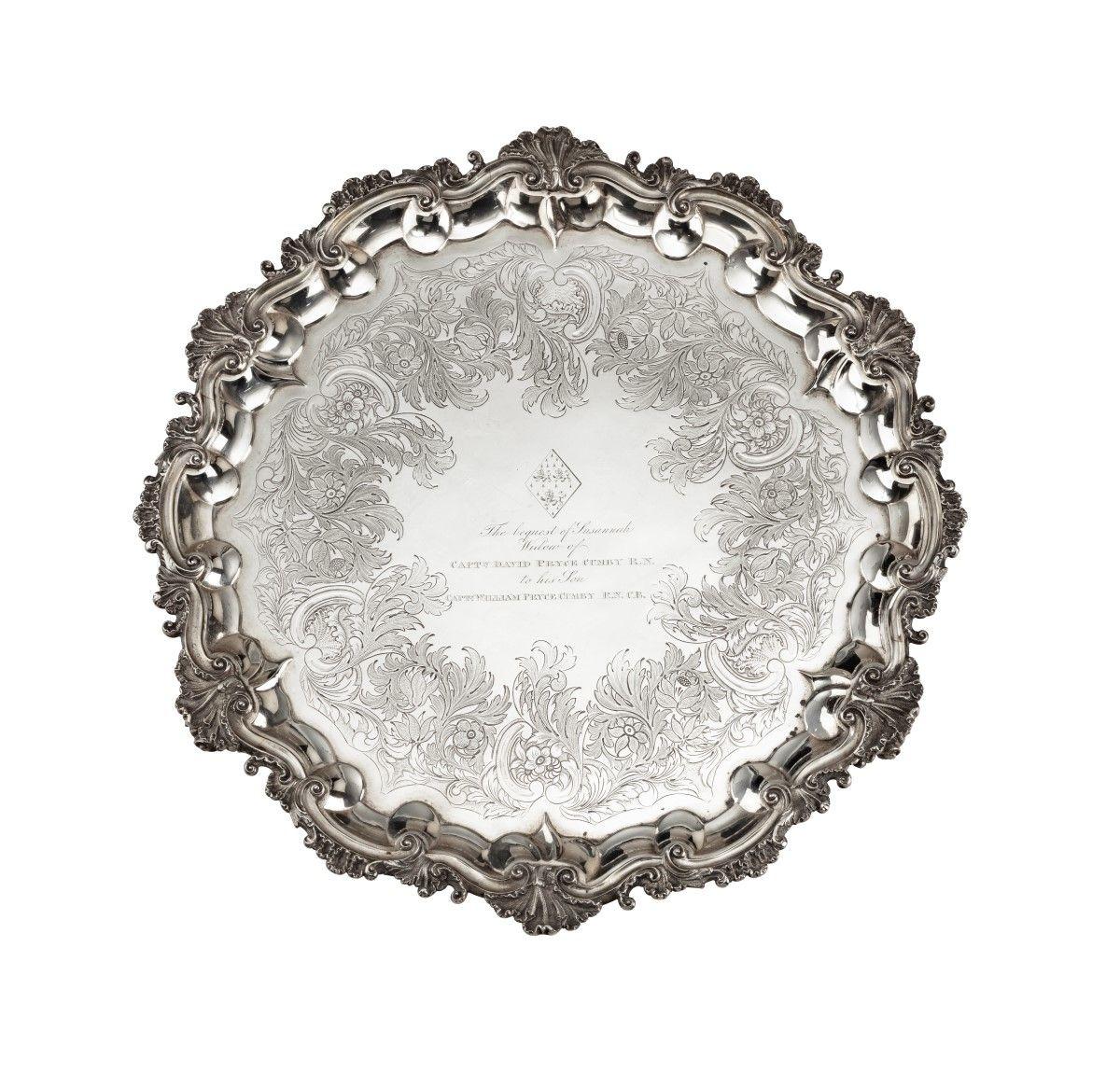 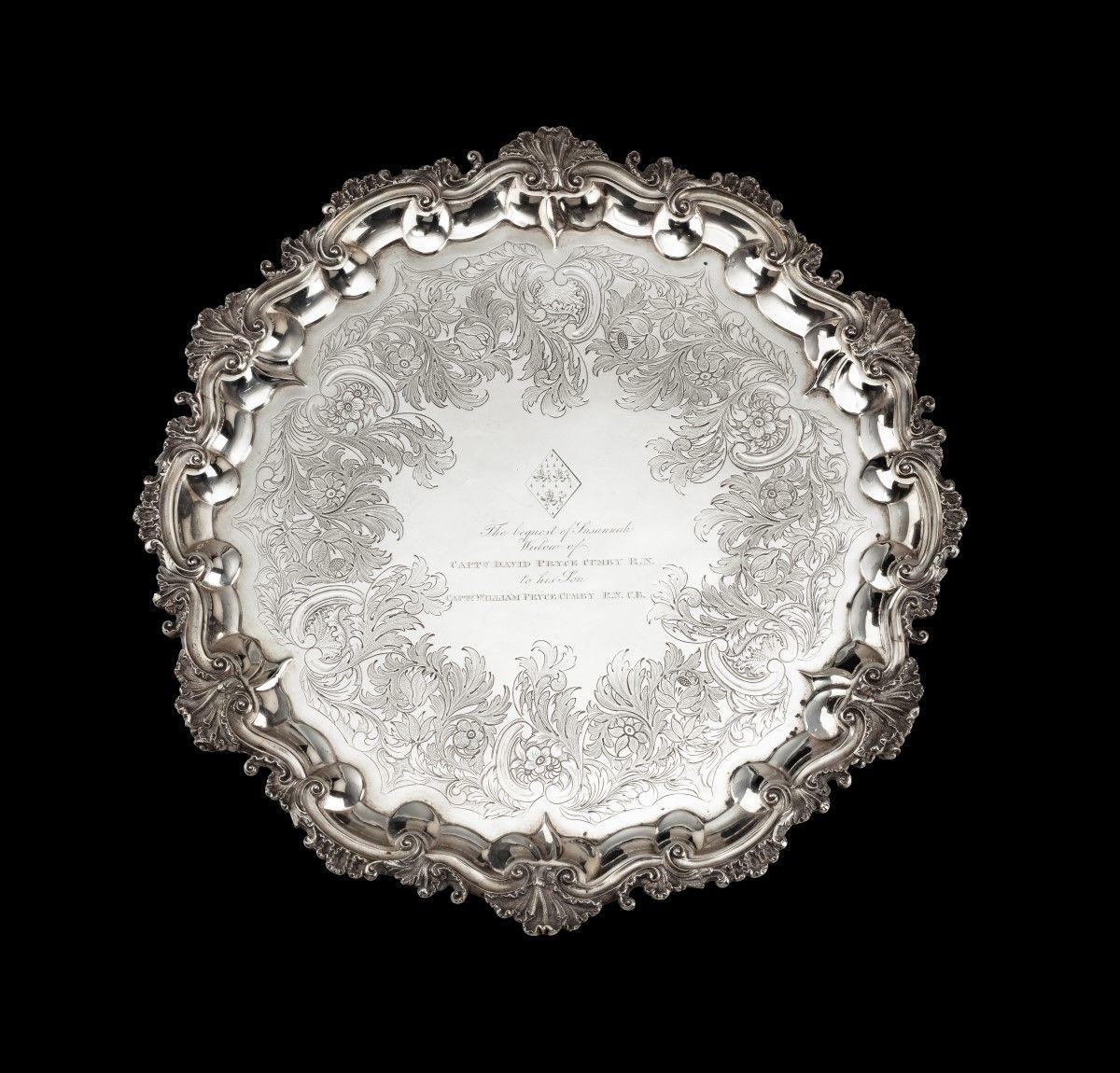 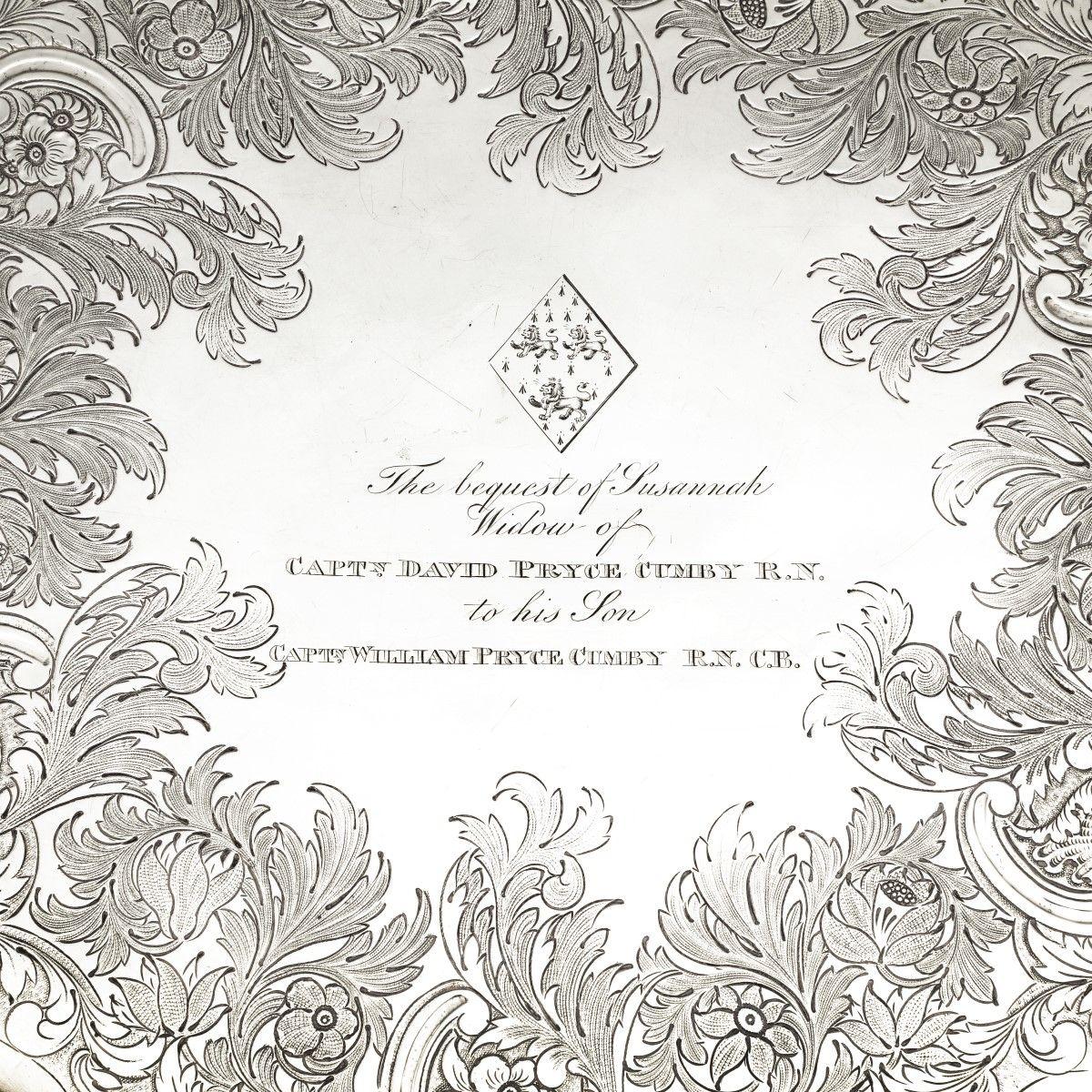 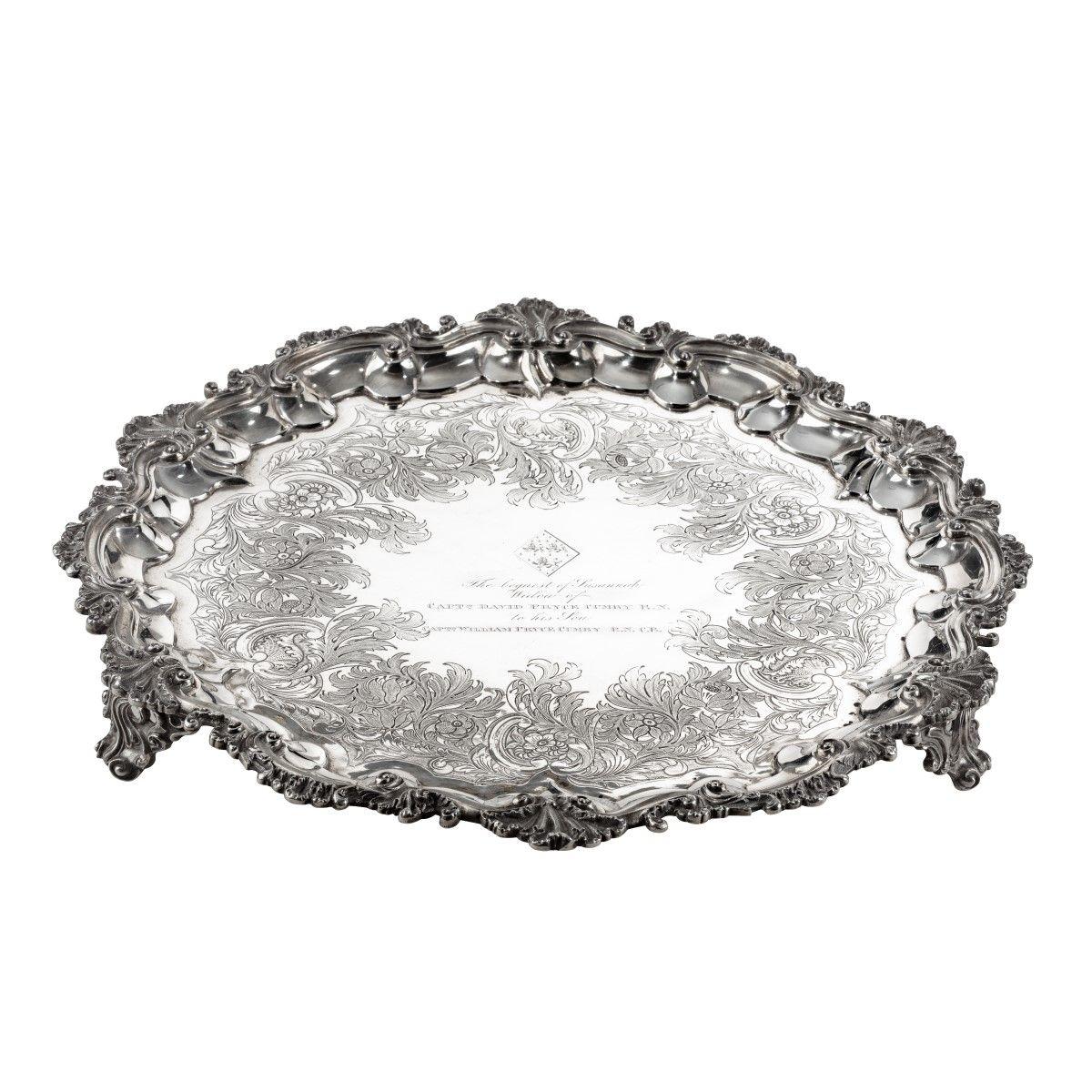 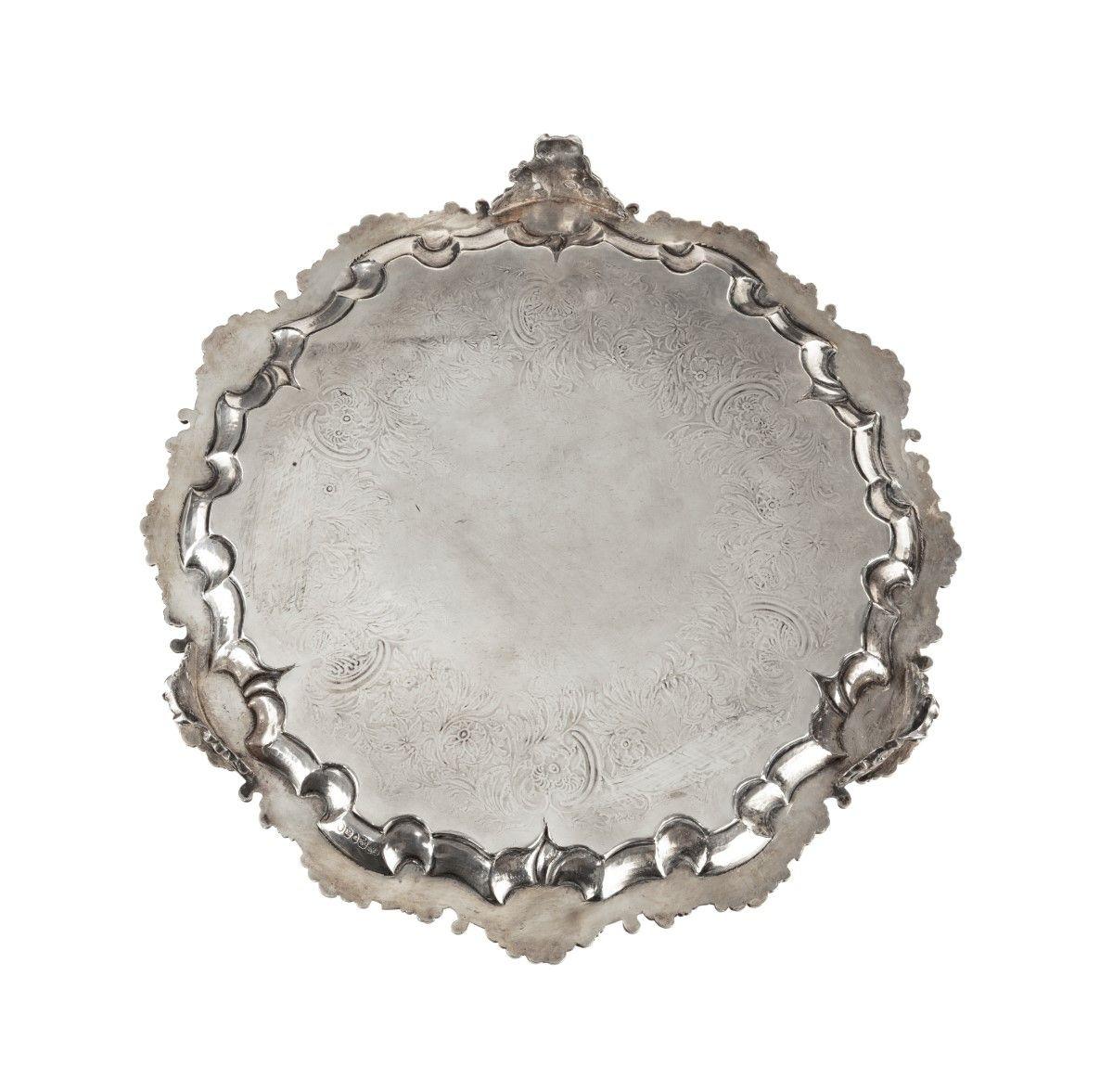 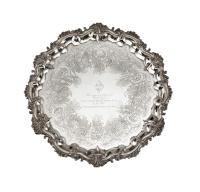 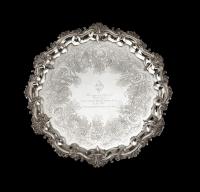 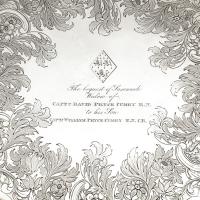 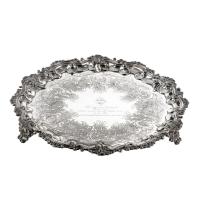 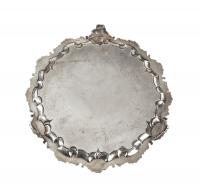 A William IV silver salver with shellwork and scroll border, on four feet, profusely chased and engraved with foliate decoration and inscribed in the centre beneath a widow’s coat of arms: The bequest of Susannah Widow of Captn David Pryce Cumby R.N. to his Son Captain William Pryce Cumby R.N. C.B. Hallmarked for William Ker Reid, London 1836.

William Pryce Cundy entered the Navy in 1784 serving in a succession of ships before passing as lieutenant in 1793. A less-than-meteoric rise saw him appointed first lieutenant to Captain John Cooke in Bellerophon, 74-guns, in November 1804.

Within a year, Cumby took command of the ship when Cooke was mortally wounded at the height of the Battle of Trafalgar. Before dying on his own quarterdeck, Cooke implored Cumby ‘never to strike’.

During the action, Bellerophon sustained a ferocious assault by the French ship L’Aigle requiring Cumby on one occasion to intercept and throw overboard a grenade with a burning fuse which could have destroyed his ship.

When L’Aigle eventually limped away, Cumby took possession of two Spanish prizes, Monarca then Bahama. Cumby received the highest praise for his conduct during the battle being promoted commander and post-captain in quick succession before Nelson’s funeral in January 1806, which he attended in official capacity as a follower.

He subsequently commanded Drydon, 36 guns, and Polyphemus, 64-guns, in the West Indies, before transferring to Hyperion, 42-guns, in which he captured the American brig Rattlesnake after a lengthy chase in the Bay of Biscay.

His last appointment was superintendent to Pembroke Dockyard where he died on 27 September 1837, just eighteen months after his step-mother Susannah bequeathed him this silver salver.