Ruscelli's Humanist translation of Ptolemy, including the first twin hemisphere world map in an atlas 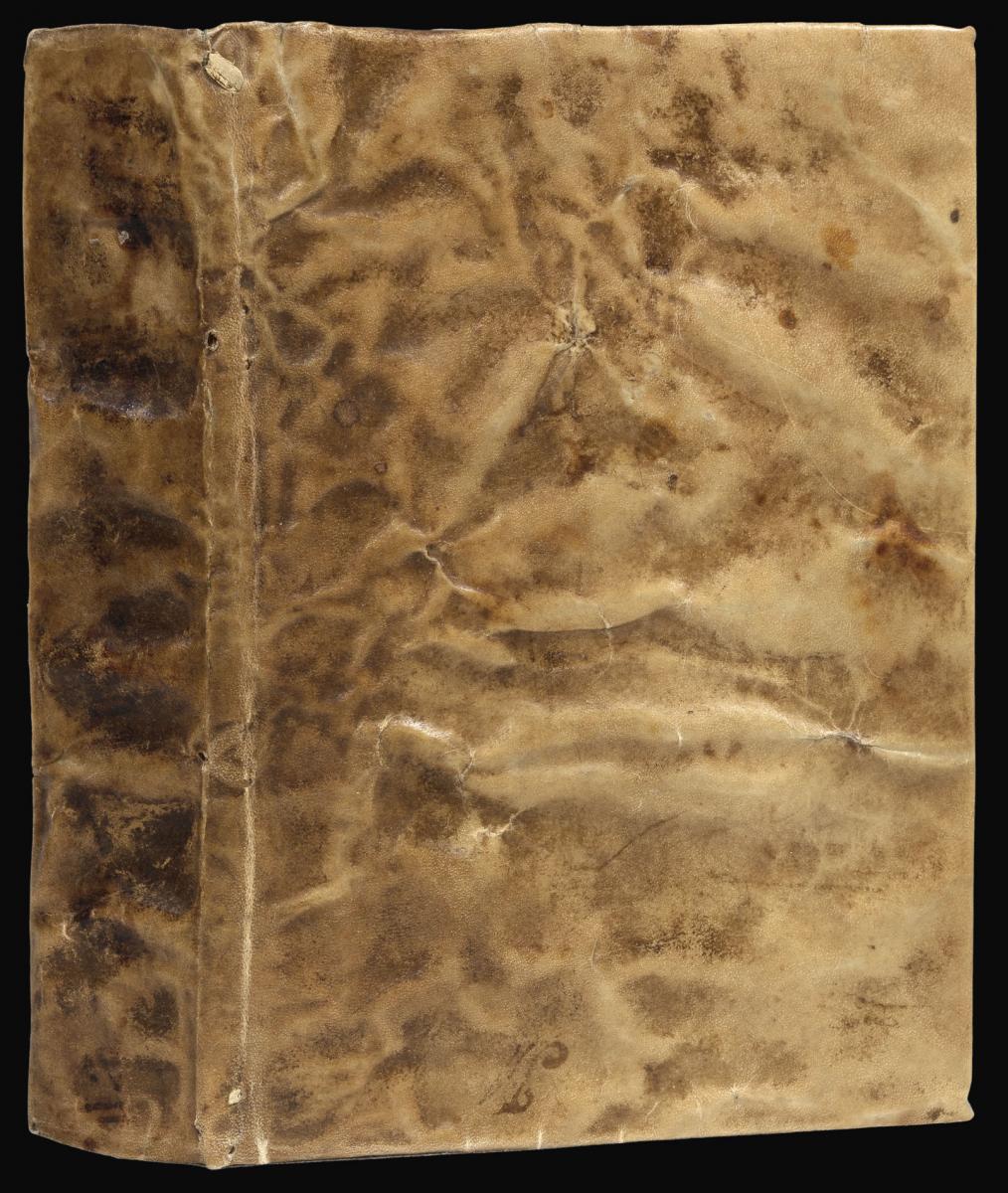 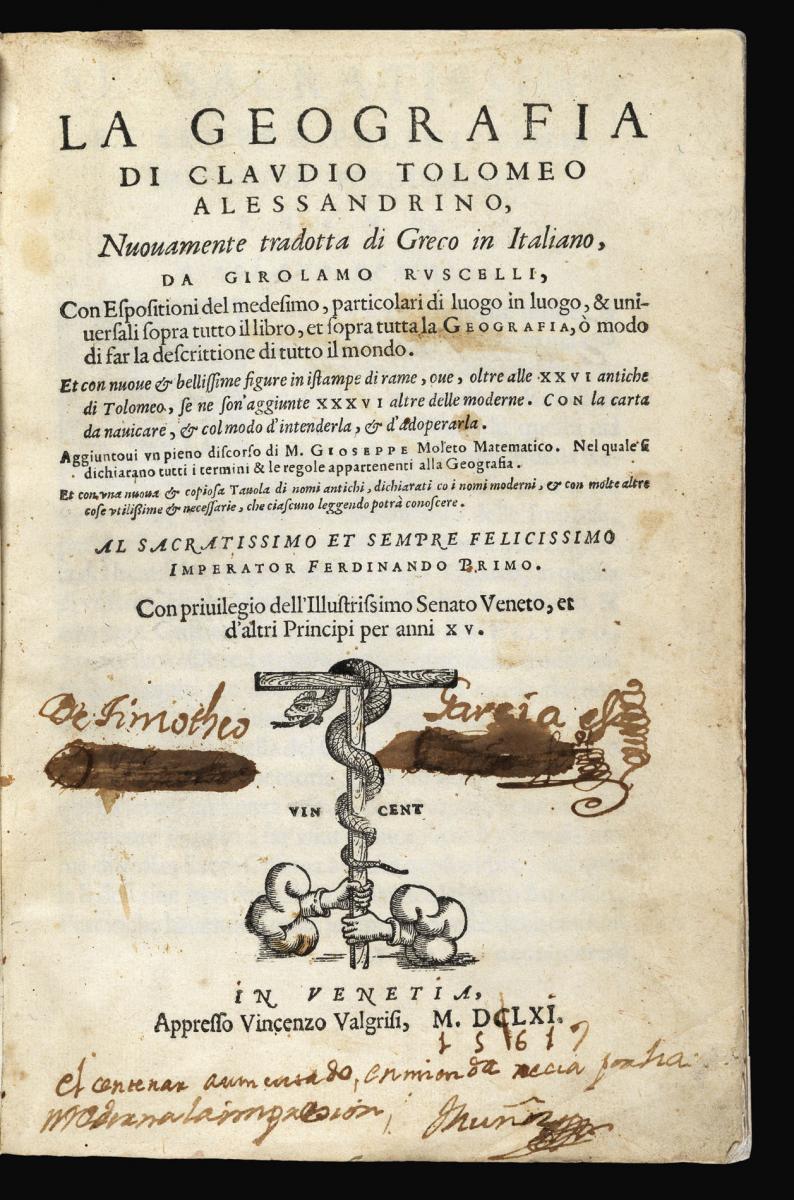 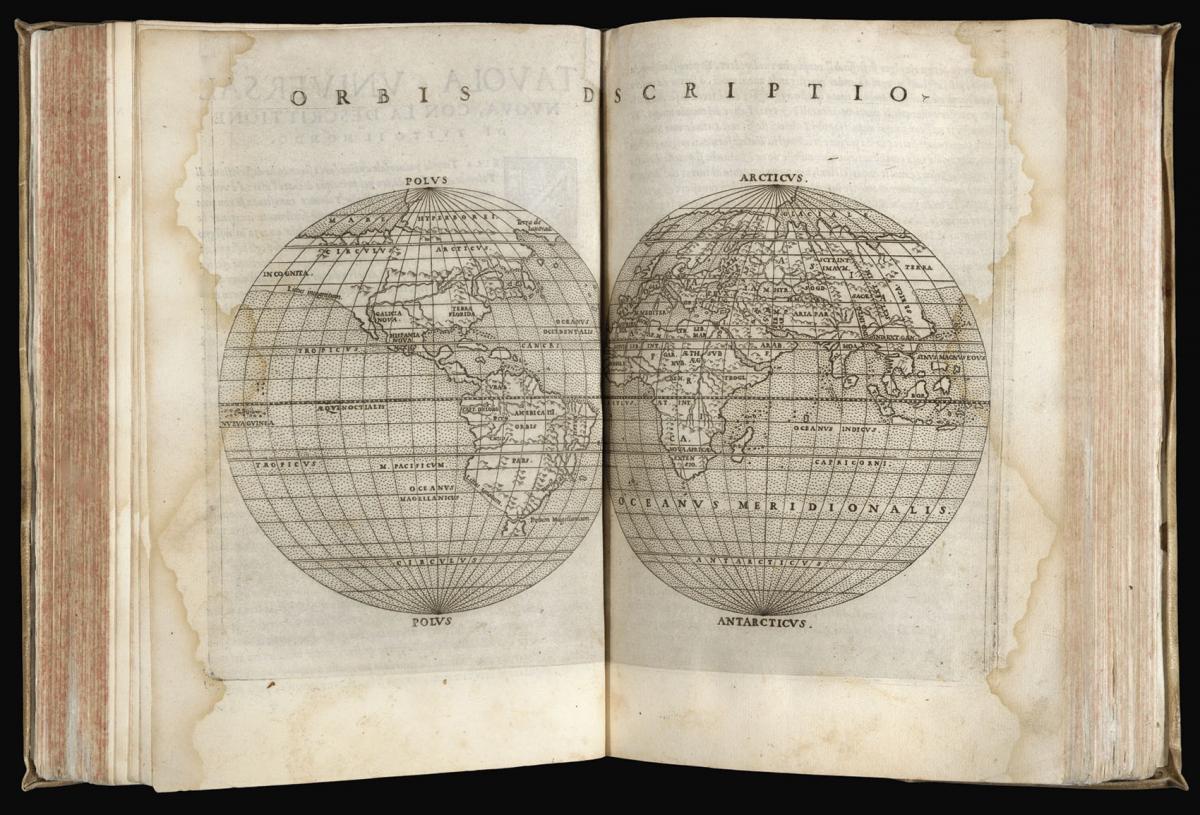 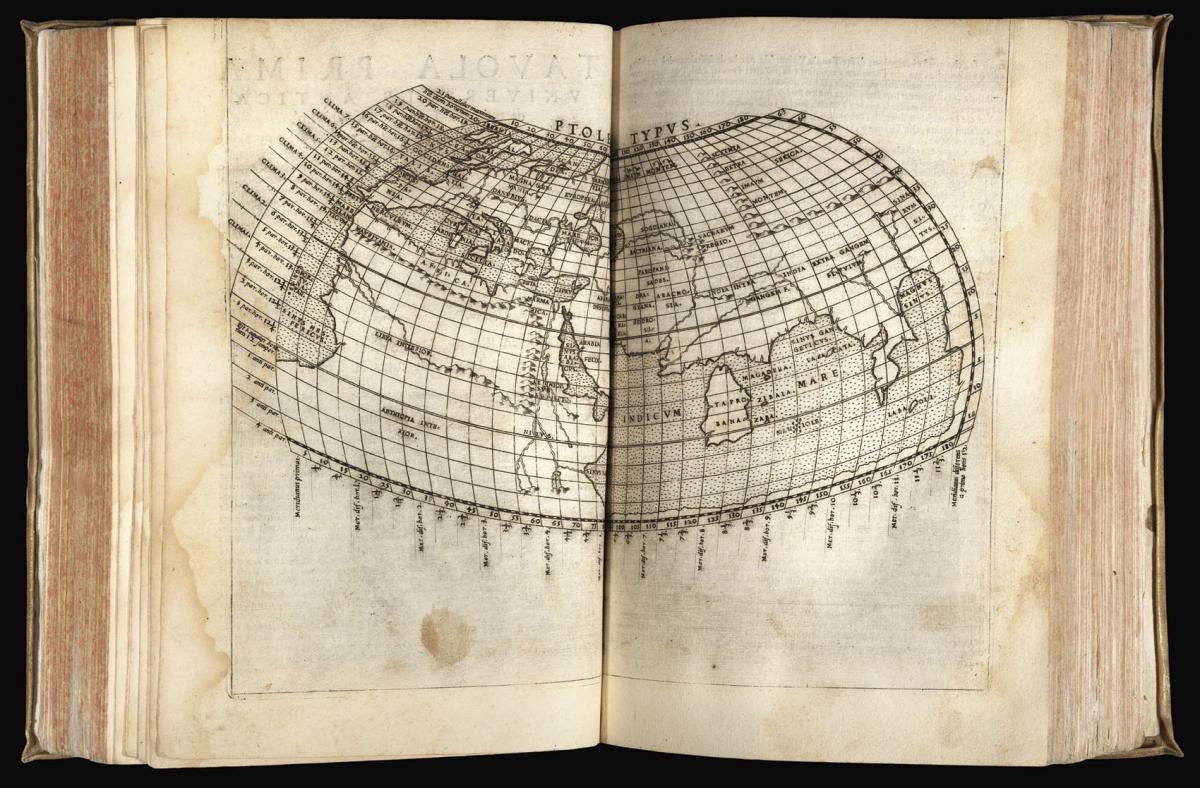 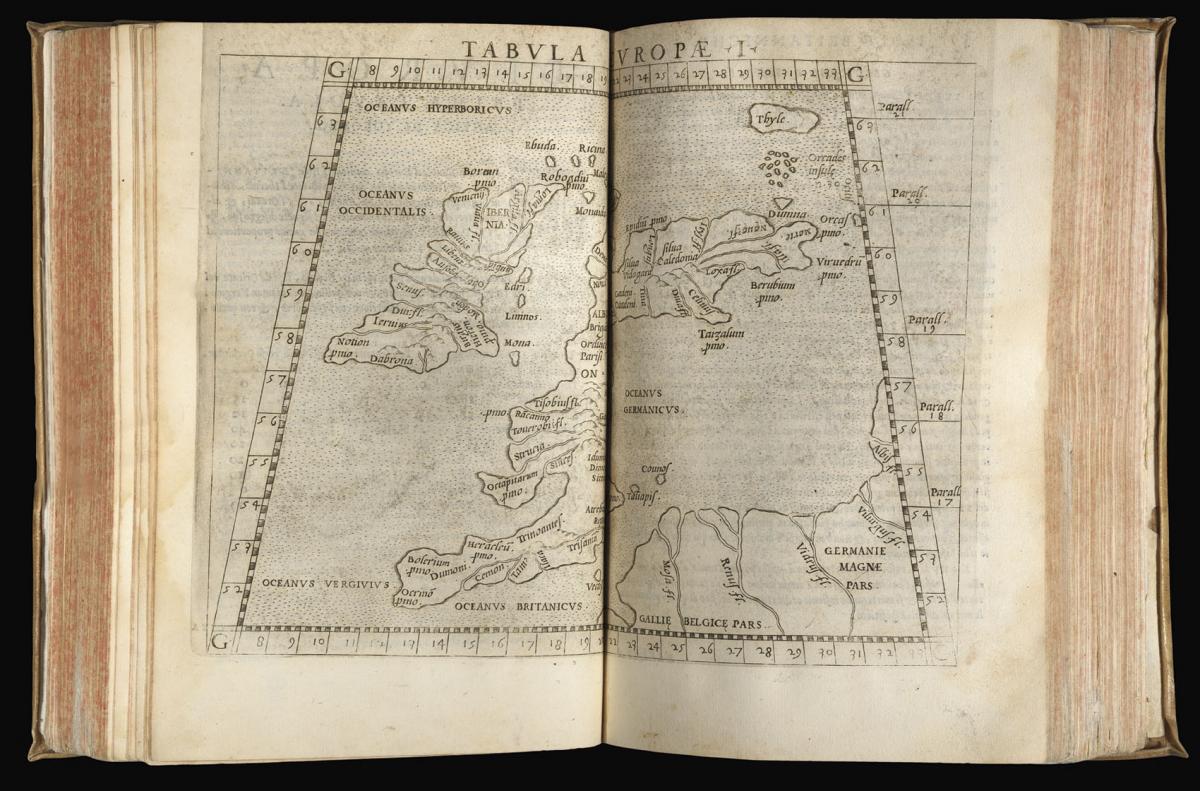 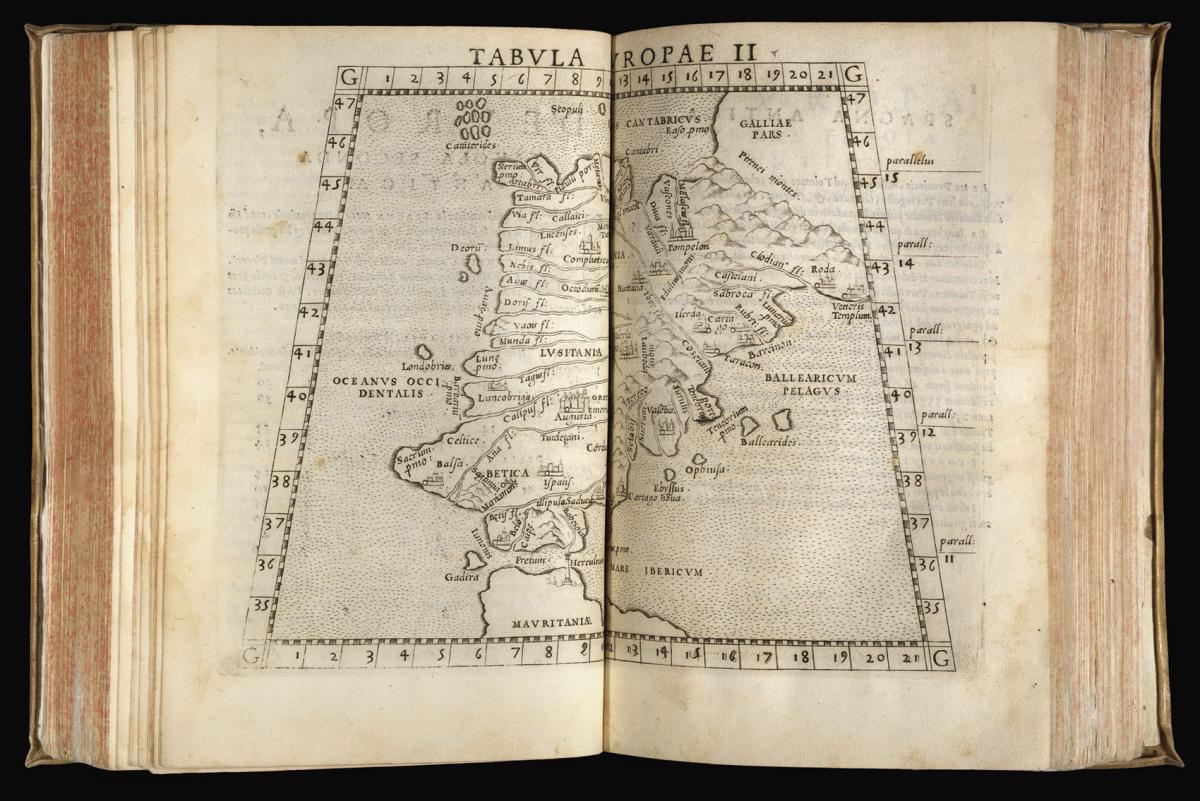 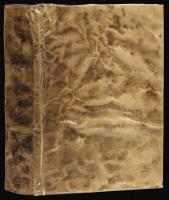 Ruscelli's edition of Ptolemy superseded Giacomo Gastaldi's 1547/1548 work. The beautiful maps, which consist of 28 Ptolemaic maps and 36 "modern" maps include two fine world maps and seven related to the Americas: the "place names along the upper Gulf Coast revealed the explorations of Pineda, Cabeza de Vaca, and Moscosso, and the Mississippi, here shown as the Rio de Spiritu Santo was carefully depicted" (Martin and Martin). They are enlarged copies by Giulio and Livio Sanuto of Gastaldi's maps, except 'Universale Novo', which was drawn on a new projection and renamed 'Orbis Descriptio'.

Some of the important maps include: 'Septemtronalum partium nova tabula', a reduced version of the Nicolo Zeno map of the North Atlantic Ocean of 1558 and including many fictitious islands; 'Tierra Nueva', a map of the east coast of North America showing the Hudson and St. Lawrence Rivers; and 'Nueva Hispania Tabula Nova' showing the Yucatan as a peninsula. Other maps of America are 'Tierra Nova' showing South America, 'Brasil Nuova Tavola', 'Isola Cuba Nova', and 'Isola Spagnola Nova'; 'India Tercera Nuova Tavola' shows the East Indies.

'Orbis Descriptio', the twin hemisphere new world map, which as Shirley reports, is the earliest of its kind to appear in an atlas, shows not only North and South America, but also the islands of New Guinea. Maps not found in the previous Gastaldi edition of 1548 are: Scandinavia (after Jacob Ziegler, 1532); Brazil (after Giovanni Ramusio); the Arctic regions; South Africa; and a navigational chart of the world.

Girolamo Ruscelli (1500-1556) was a well-known humanist in the sixteenth century, and was the self-proclaimed founder of arguably the first scientific society, the Accademia Segreta, which is supposed to have flourished in Naples between 1542 and 1547. Earlier, when in Rome, Ruscelli was a founding member of the Accademia dei Sdegnati, in 1541; by 1548 he was in Venice working as a writer and proofreader for Vincenzo Valgrisi, who published this edition of Ptolemy.

What we know of Ruscelli is discerned from his 'Proem' to the 'Secreti nuovi', one of the many "books of secrets" of the sixteenth century, published in 1567. He was "highly praised by contemporaries as a man of immense erudition, and humanistic writings add substance to these encomiums. Among his works were annotations on Boccaccio and Petrarch, commentaries on the Italian language, books on the design of arms and armour, heraldry, militia, the rules of Italian poetry, history, and a translation of Ptolemy's 'Geography' [as here]" (Eamon and Paheau).