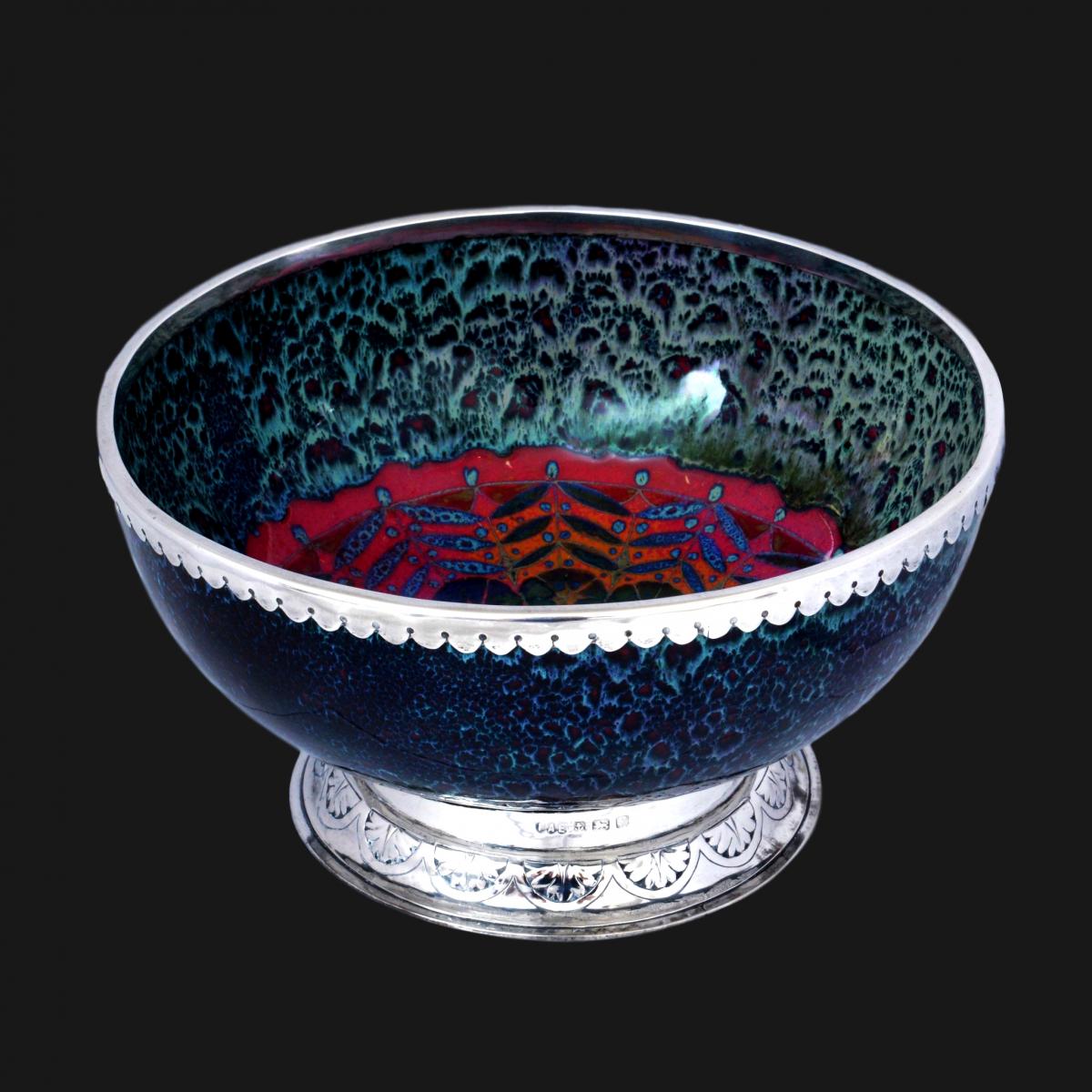 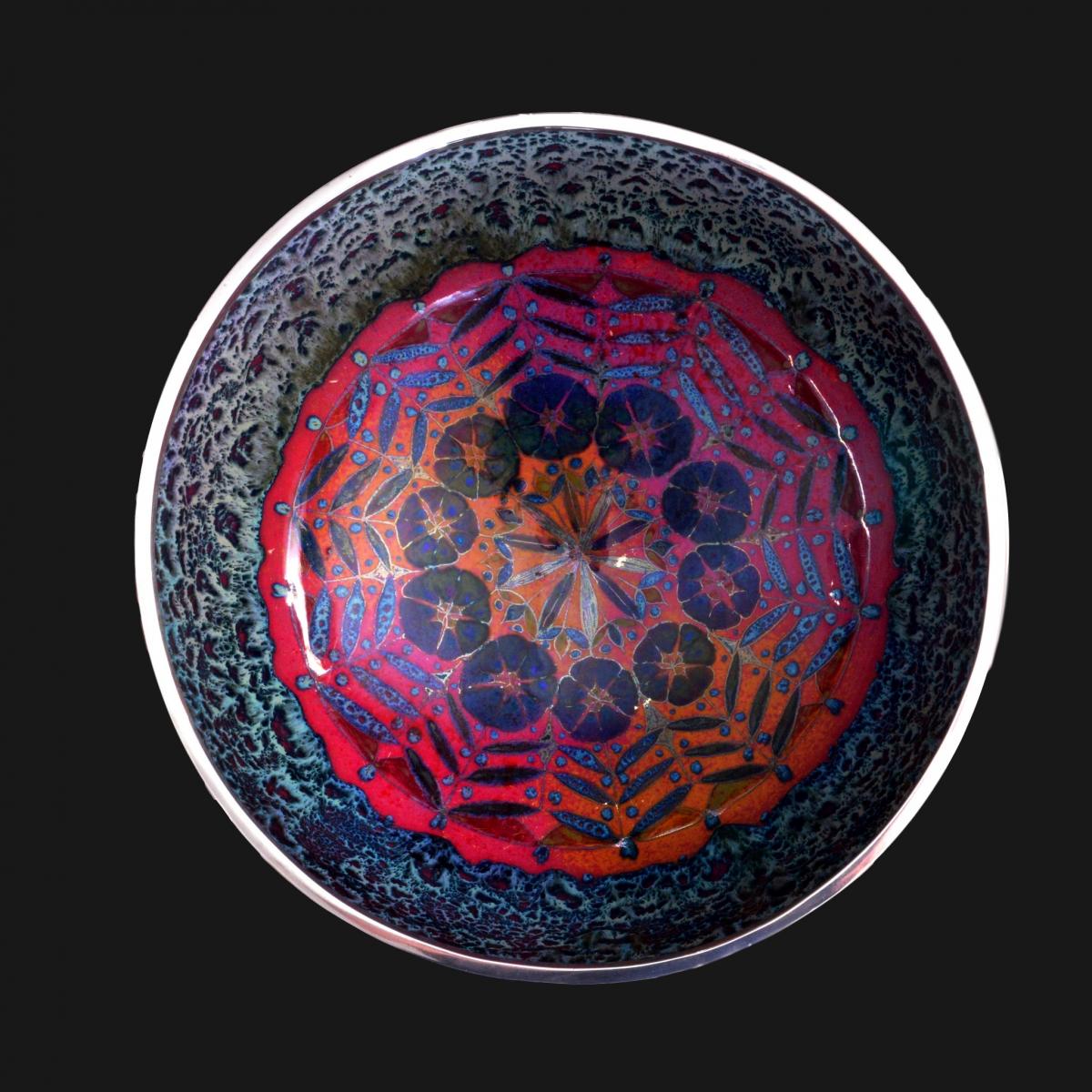 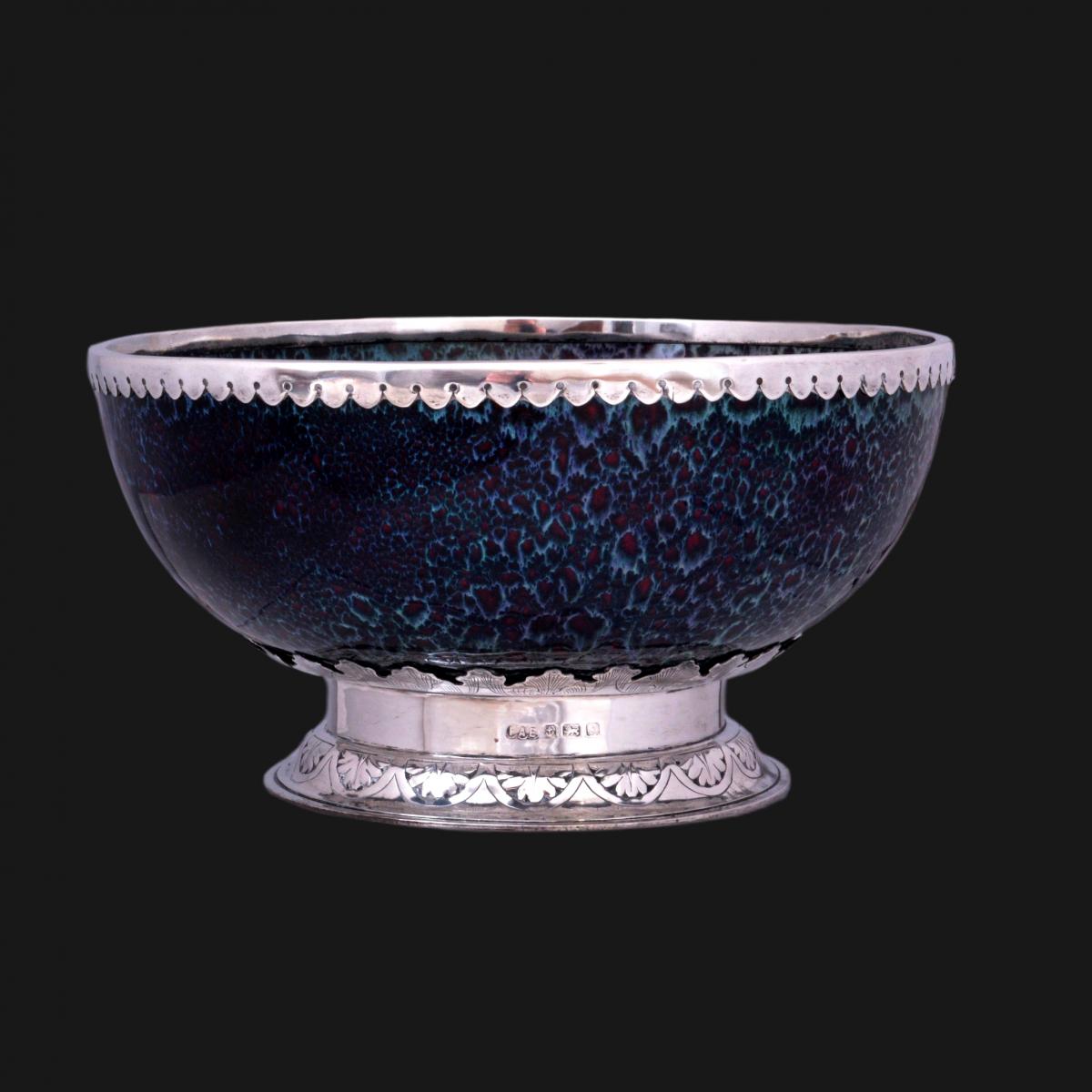 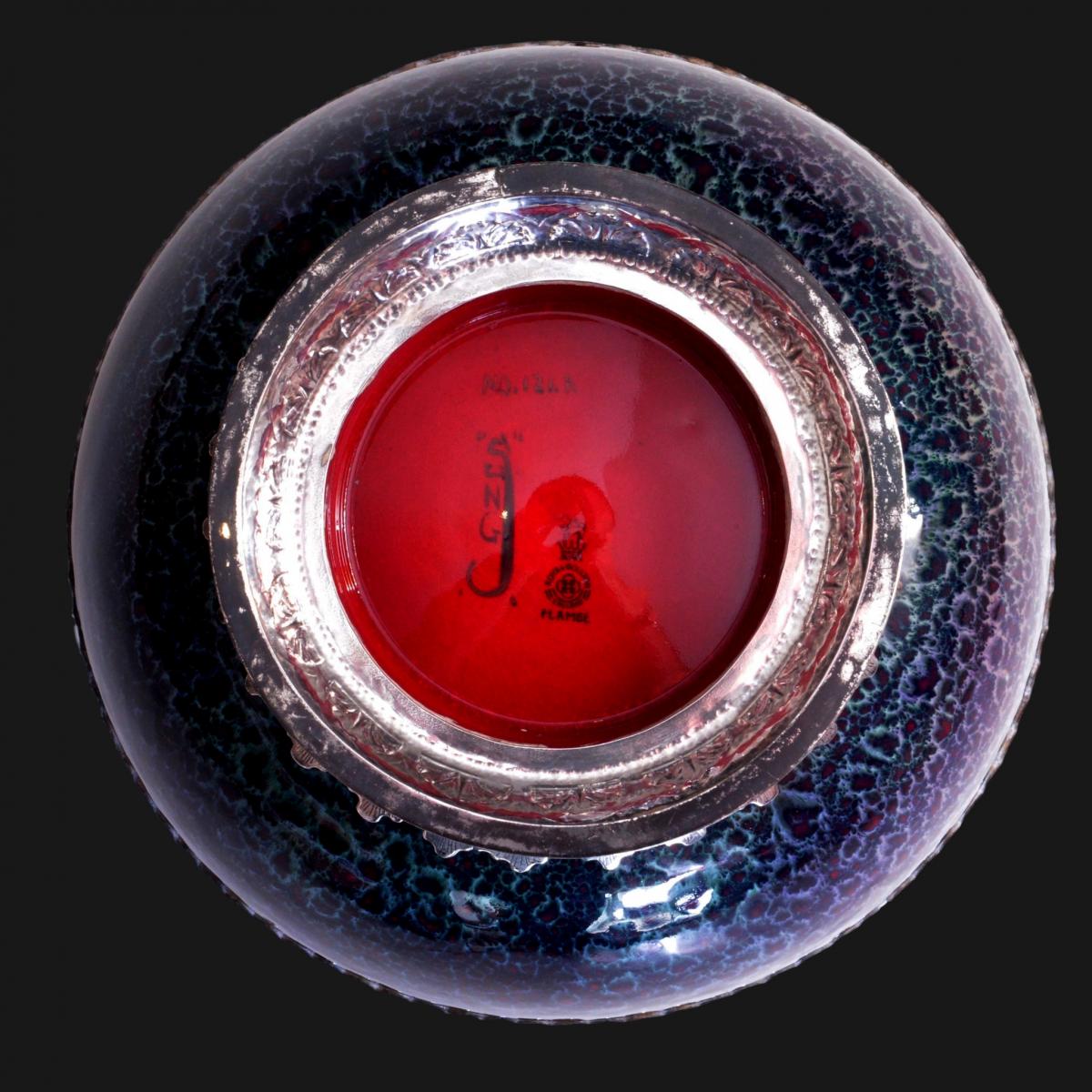 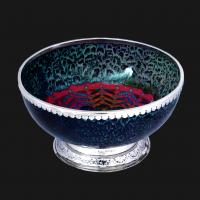 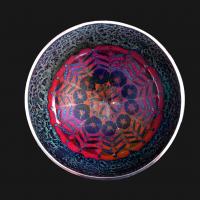 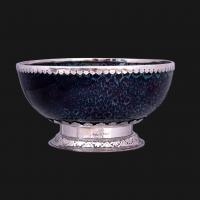 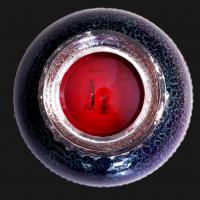 For sale is this fantastic Royal Doulton Sung bowl mounted in silver by Francis Arthur Edwardes of the Duchess of Sutherland Cripples Guild.  The silver is fully assayed for Birmingham 1923. Royal Doulton’s Sung ware, an innovative variant on Doulton’s flambe glaze, was introduced in c 1920 by Doulton’s leading designers Charles Noke and Harry Dixon.  They designed most pieces for the Sung range but this piece is unsigned (marked for Doulton, Sung only).  Doulton had great difficulties in controlling the firing of the, high fired, Sung pieces which were therefore expensive and are today relatively rare.  Silver marked with Edwardes personal mark is even rarer.

Francis Arthur Edwardes was born 6th April 1865. The first 40 years of his life are something of a mystery – his birth certificate has not been found, he appears in no census returns or other official records. There is no record of where he studied. It is said he was born the son of a silversmith . Later in his life when a metalworker he is also described as an artist but there is no record of art in his name, though he certainly produced some striking enamels.

What we do know is that around 1906/7 he arrived at Potteries Guild of Cripples in Hanley, Stoke on Trent (which was to become the Duchess of Sutherland Cripple’s Guild). The first time Francis is mentioned in connection with the Guild is July 1907. Mr Edwardes is described as the able assistant to the manager of the metalwork department, Miss Newey . Francis would have worked in the Potteries Cripples Guild workshops in Wilson Street in Hanley. Metalworking had been increasing in importance for the Guild and had reached a point where Millicent believed it should become a separate commercial venture.

In July 1907 the Potteries Cripples Guild became the Duchess of Sutherland Cripples Guild. Capital of £5000 was raised to form the new limited company. The Directors of the new Guild were Millicent Sutherland, the newspaper proprieter, C. Arthur Pearson, Director of Waring and Gillows Ltd, S.J. Waring and the Director of Mintons Limited, J.F. Campbell . At this time, the Duke of Sutherland also provided buildings on the Trentham Estate for a new larger workshop. This opened in January 1908.

Francis took over the metalwork department of the DSCG at some point in 1908. This probably coincided with Mabel Newey, the metalwork manager, marrying the former Honourable Secretary of the Potteries Cripples Guild, Fred Salt, in the spring of 1908 . Both Mabel and Harry Foster Newey (her father) disappear from the Guild at this time. Francis continued as the Manager of the Metalwork section at the Guild until it was agreed that it would be wound up voluntarily in November 1920 .

A newspaper article about one of the last sales of the Guilds metalwork does mention that Mr F. A. Edwards the late manager of the Guild, who has some of the cripples working for him, can supply them if you write to him at 58, Windsor-street, Hanley, Stoke on Trent . How long this new venture lasted is unknown. Later, Edwardes became instructor to the metal-work classes at Burslem School of Art and continued in that position until his retirement, owing to advancing age, some years before the war .

The application of silver to ceramics was of particular significance to Edwardes and the potteries Guild. By 1905 the Potteries Cripples Guild was selling ceramics made by both Doulton and Bernard Moore with metal mounts. By 1907, Bernard Moore was a Director of the Potteries Cripples Guild. He had started producing his Flambe wares around this time and also worked with Doulton to start their own Flambe range. It’s likely that Bernard Moore worked with Francis at the Guild at this time and a sang-de-boeuf claret jug by Bernard Moore fitted with silver mounts by Francis Arthur Edwardes was made in 1907 .

Francis also began working with William Moorcroft around 1925. Francis and William Moorcroft were close friends . William Moorcroft had been an early visitor to the Trentham Workshops of the DSCG. He visited in June and September of 1910 and Moorcroft’s records show Edwardes mounted one, maybe two, pieces for a special order by a Paul Marcereau of St Petersburg in that year . According to William Moorcroft, the mounts were made before the ceramic vessels, which were thrown and turned to fit the diameter. Metal mounted Moorcroft ceramics were a third more expensive than those without .

Francis died in Stoke on Trent on the 5th of June 1944 leaving behind a widow, Agnes and a daughter, Leslie Rose . His obituary states that he came to North Staffordshire 40 years earlier on the invitation of the Duchess of Sutherland. He was a most eminent and able craftsman in silver and other metals and undertook the training of the cripple children in metal crafts. When the cripples’ metal-work classes terminated he continued to work as a craftsman, and many people who appreciated his fine work are proud possessors of his hand wrought plate and jewellery.

Millicent Sutherland subsequently installed a plaque to Francis in the church on the Trentham Estate demonstrating her gratitude for his contribution to her Guild which is shown in the images.