RICHARD PATON (1717-1791) - The action between the frigates Bonhomme Richard (Capt. John Paul Jones) and HMS Serapis during the Battle of Flamborough Head, 1779 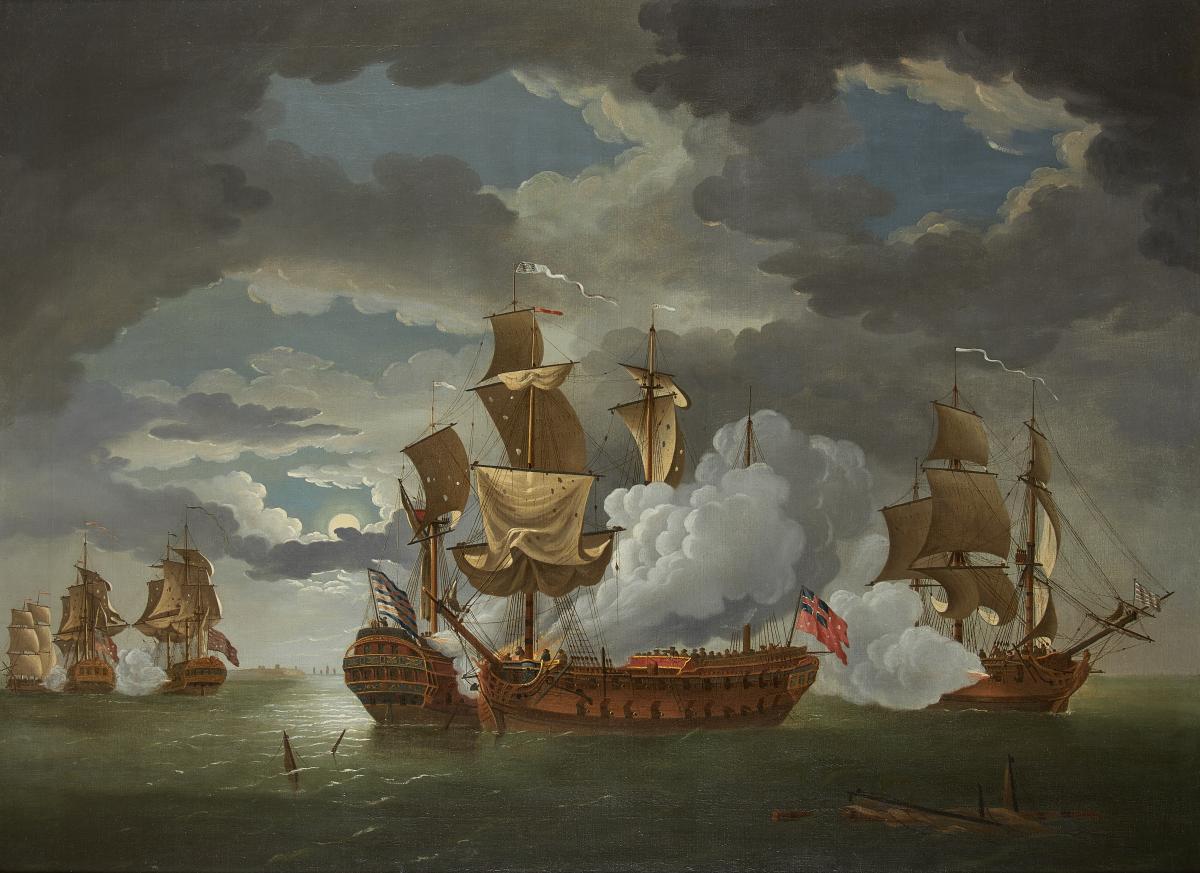 The action between the frigates Bonhomme Richard (Capt. John Paul Jones) and HMS Serapis during the Battle of Flamborough Head, 1779

In 1779, the American War of Independence was at its height and Spain and France had joined forces with the Americans against Britain. Britain had to rely even more heavily on its trade with the Baltic States to maintain vital naval supplies of timber and hemp.
On 23 September 1779, a large Baltic convoy of forty-one ships, escorted by the frigate HMS Serapis and the sloop HMS Countess of Scarborough, was sailing along the Yorkshire coast. They were intercepted off Flamborough Head by an American and French squadron led by John Paul Jones. The squadron had sailed from Lorient on 14 August with the frigates Bonhomme Richard, Alliance, Pallas and two smaller ships. They had cruised along the Irish and Scottish coasts taking several prizes before meeting the convoy off Flamborough Head.

The action began at 7.20pm and was watched by crowds on the shore. HMS Countess of Scarborough was soon captured by Pallas but the major event of the action was the battle between the Bonhomme Richard and HMS Serapis (depicted in this work). The engagement lasted over three hours until 10.20pm when Jones finally succeeded in forcing the British ship to surrender, overcoming a more powerful adversary. Unfortunately, Bonhomme Richard sank the next morning as it had been badly damaged by the action. Jones succeeded in getting his prizes back to the Texel and finally to France.
The Battle of Flamborough Head was the first major success of the new American navy.

Notes on the artist and painting :
Richard Paton was the youngest son of an impoverished family in London and was sent out by them to beg on the streets from an early age.  Discovered by Sir Charles Knowles (later Admiral) on Tower Bridge, Paton was placed as an assistant to the ship’s painter on board Knowles’s ship.  From there his career blossomed and, largely self-taught, he became a member of the Society of Artists, before exhibiting at the Royal Academy 1776-1780.  He became one of the most established and principal marine painters of the 18th Century, and this work depicting the famous actions of John Paul Jones’s squadron was to be the last he exhibited at the Royal Academy.

There are various painted versions of this event from the late 18th Century, and indeed variants on this exact scene, specifically by Robert Dodd (1748-1815) and Thomas Mitchell (1735-1790), both of whom would have been known to Paton.  The depictions of the ships must have come from an eye witness source and thence been interpreted by each of the artists as it is doubtful that any of them were present.  As this work was exhibited at the Royal Academy in 1780 – the year after the event – it is probable that it was the first version and Robert Dodd thence copied it in order to produce a run of engravings.

Paton’s self taught theatrical qualities are all in existence in this work.  The serene sky backlit by a dramatic full moon contrasts with the smoke and fire of the action in the centre of the picture.  Slightly naïve in quality in comparison to the greatest artists of his day (Francis Swaine, Charles Brooking and latterly Dominic Serres), Paton still picks up the essence of the action which would have been a joy to the British public who had only heard of reports of the heroism on both sides in the local papers.  Exhibited at the Royal Academy in 1780, this work certainly would have been a star attraction by viewers who were already well-versed in one of the most memorable actions around British waters.