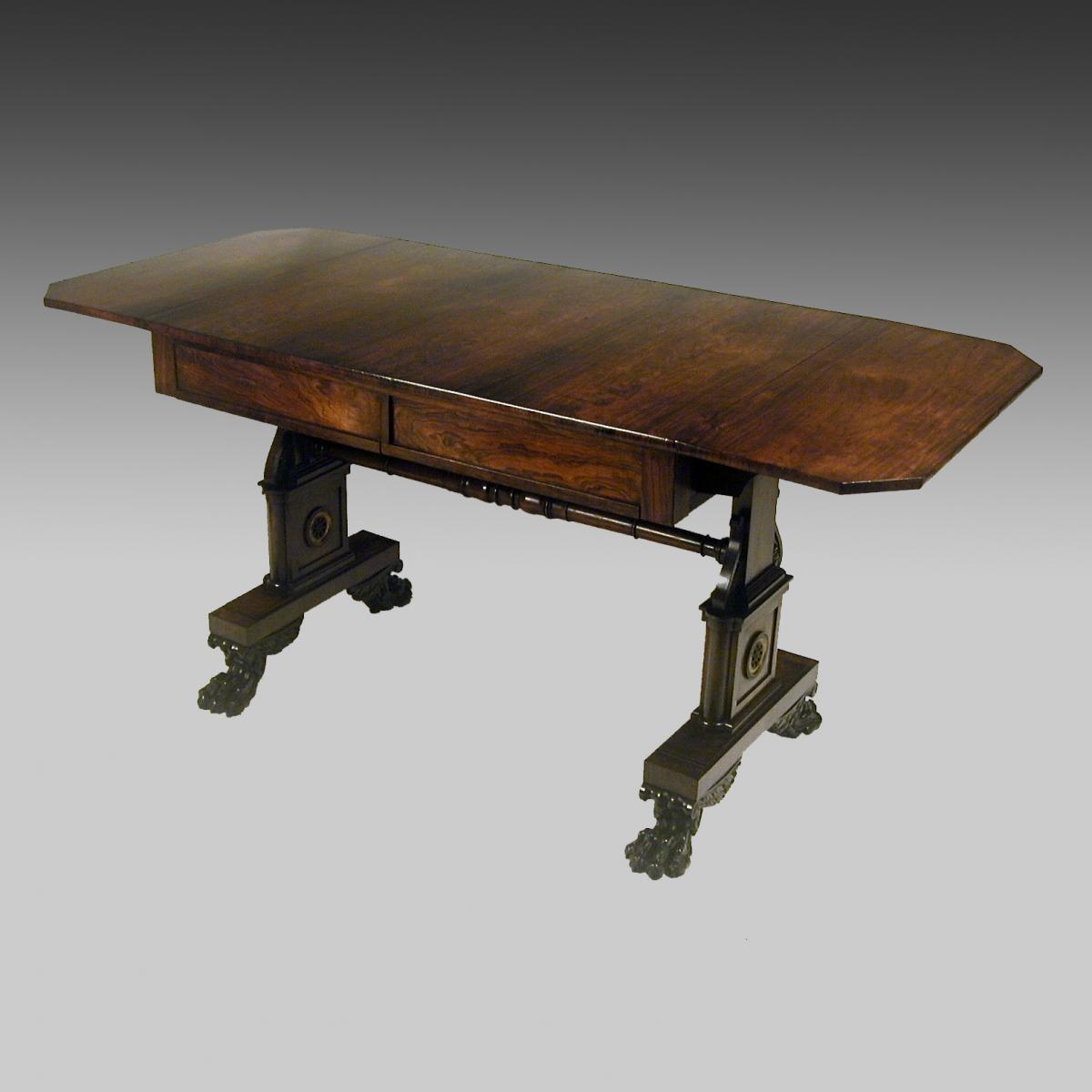 The well figured rectangular top with folding leaves and canted corners over a panelled frieze that conceals a pair of shallow drawers with dummy drawers to the reverse above a pair of trestle end supports united by a turned stretcher, classical columns and ormolu roundel mounts.

William Wilkinson (1763-1833) was part of a family with a 150 year tradition of excellence in cabinet making and as upholders. His father, Joshua, began his cabinet-making business alongside that of upholder and house broker in Moorfield in the 1760s, having become a Freeman of the City of London by admission to the Worshipful Company of Goldsmiths in 1756. Along with other great names in 18th century furniture such as Chippendale, Vile and Ince & Mayhew, upholders were those who ‘upheld’ or undertook to furnish peoples’ houses, being dealers, manufacturers, upholsterers and repairers of furniture. William joined the Company of Goldsmiths and then of Upholders in 1784 and 1809 respectively. He was well known in his time as a versatile designer and craftsman who produced a wide range of furniture in a variety of styles, such as the Egyptian, Rococo and Grecian.

William and his cousin, Thomas, became considerably successful in both their cabinet making and real estate businesses, whilst operating from their premises in 10 Broker’s Row, Moorfield between 1790 and 1807. At this latter point, William left his partnership and set up on his own in 14 Ludgate Hill, London, taking over the famous and extensive business and premises of Quentin Kay. Between 1807 and 1820, William impress stamped his pieces WILKINSON LUDGATE HILL, quite often followed by a serial number for the item. Some patented pieces also bore a brass plate die-stamped with the Royal coat of arms after he was granted the royal warrant. His reputation earned him important commissions, including a table made for the architect John Rennie to be presented to the Earl of Lonsdale at Loather Castle (and which remains there to this day) along with a commission to provide the furniture for the new Goldsmith’s Hall in London to the designs of the architect Philip Hardwick.
See: Christopher Gilbert, Marked London Furniture, 1700 - 1840, Pub.1996, pp 471-479