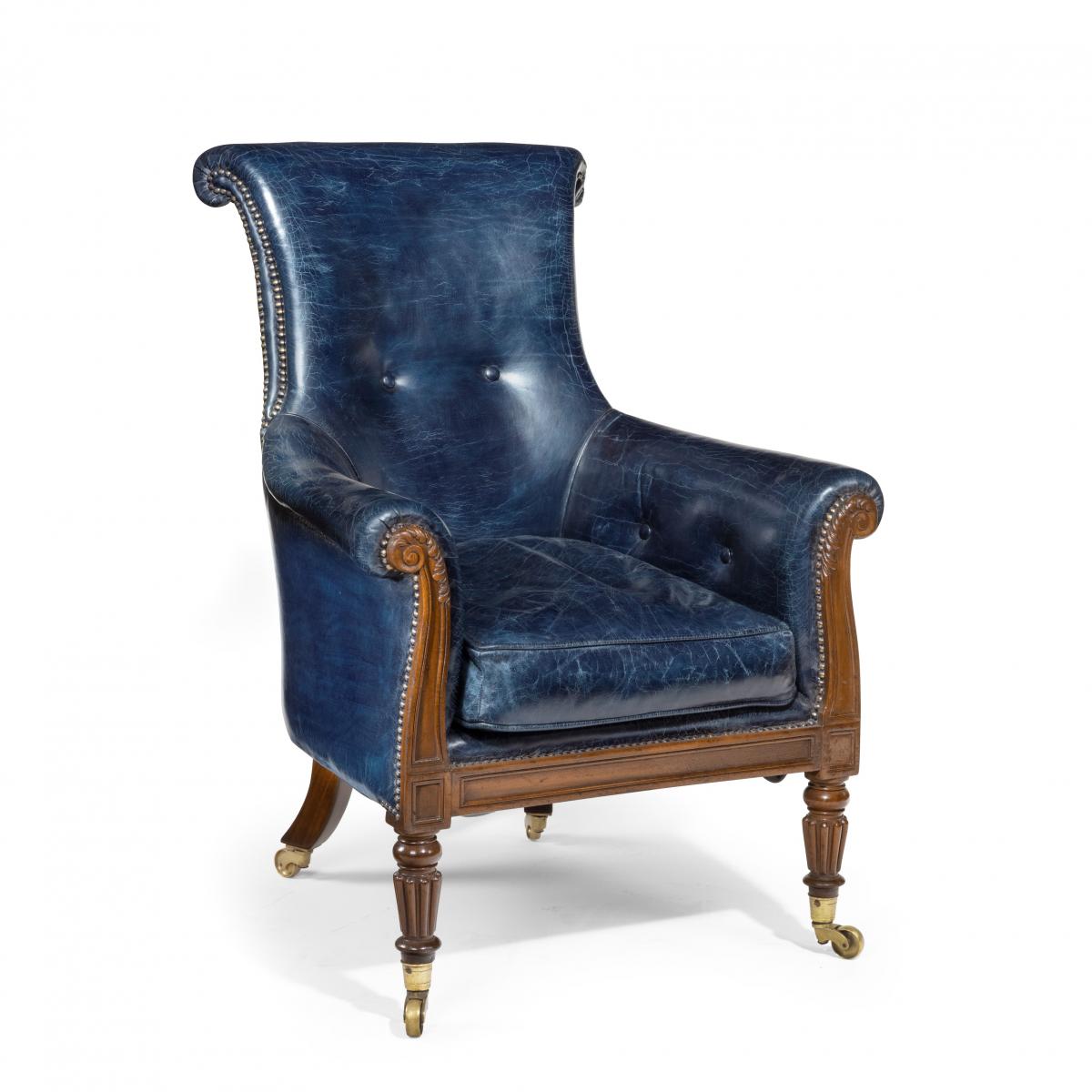 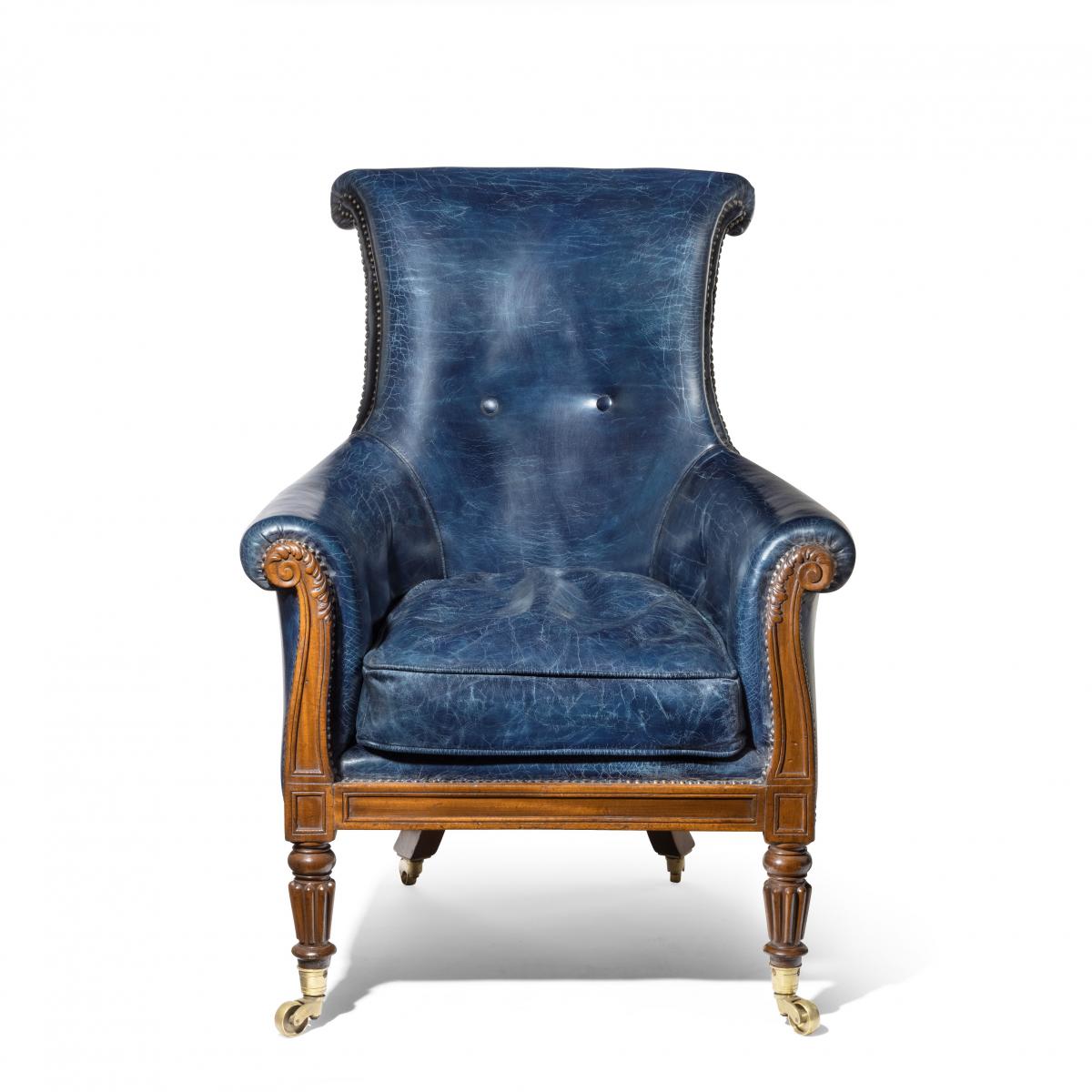 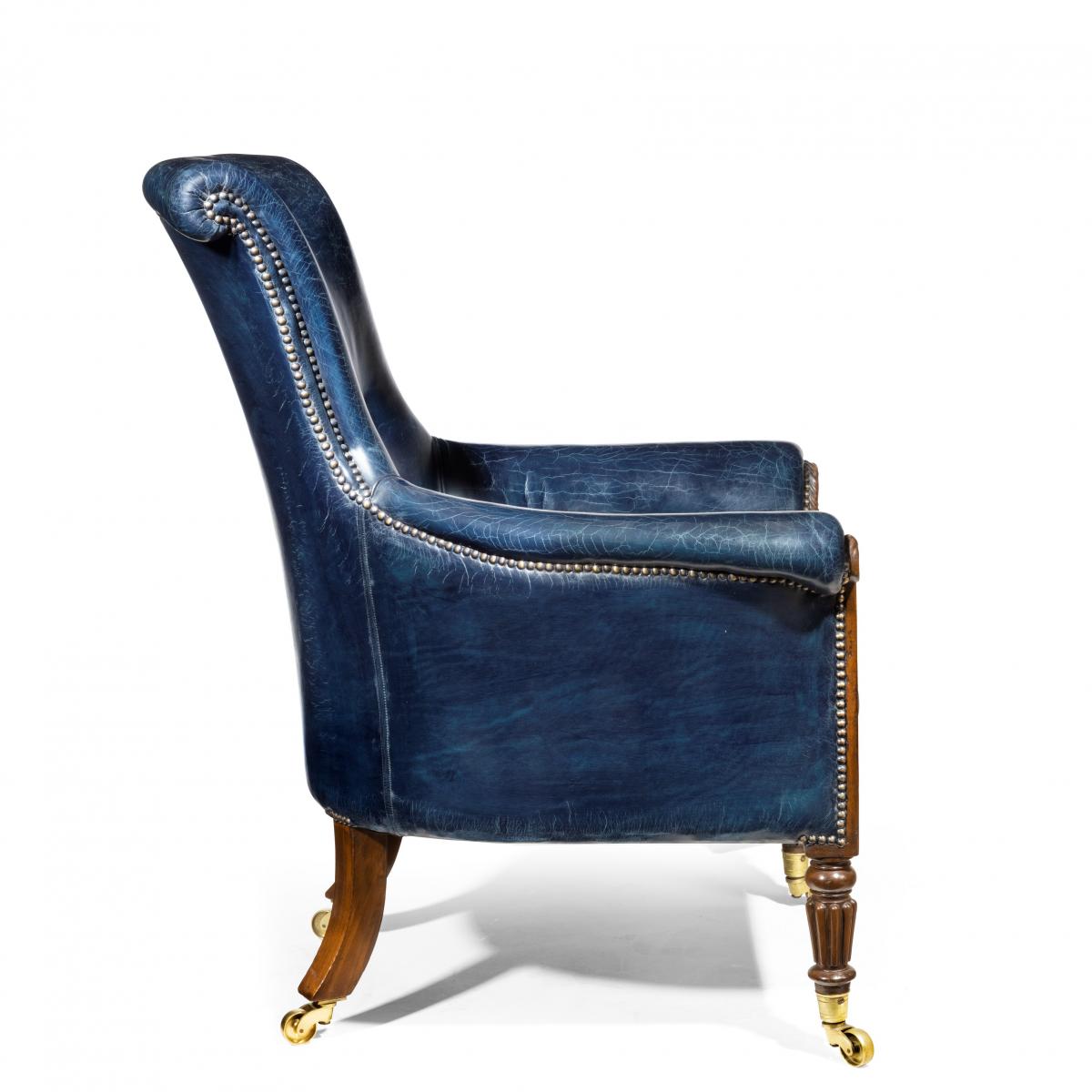 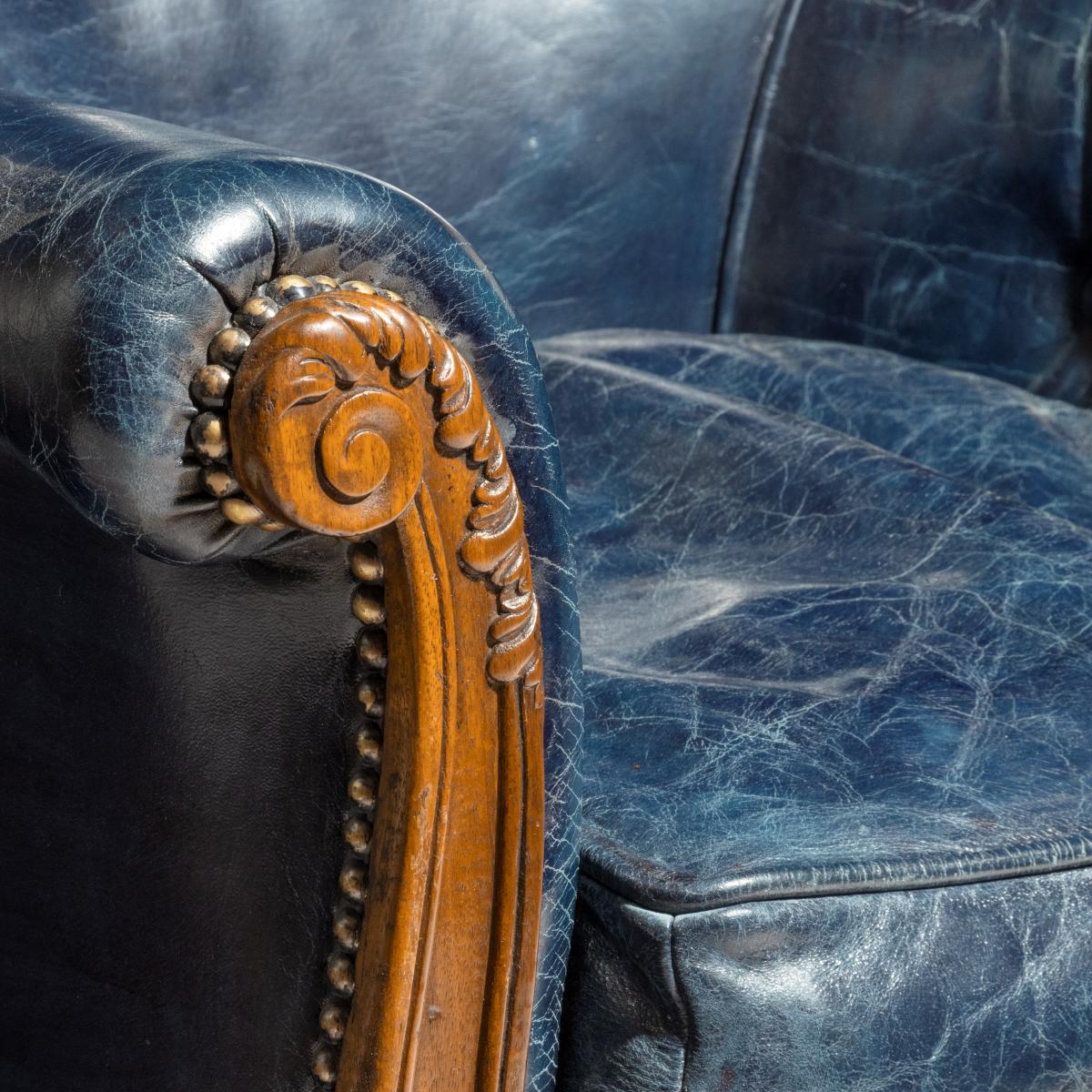 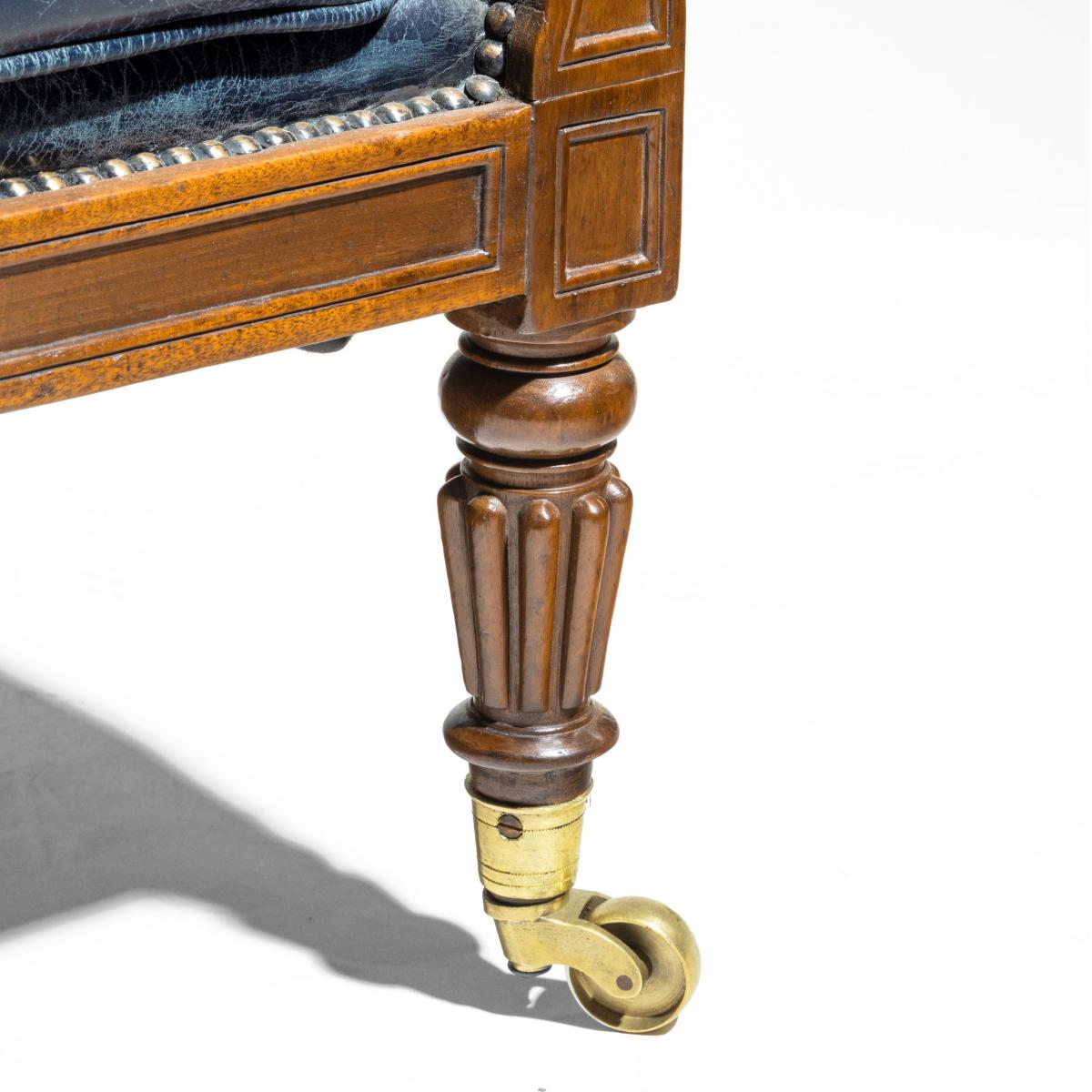 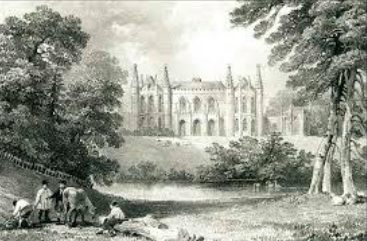 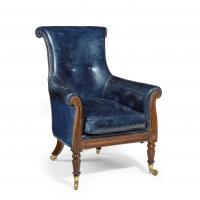 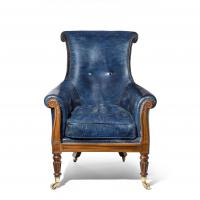 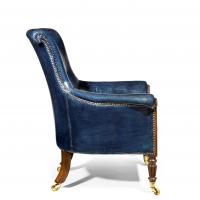 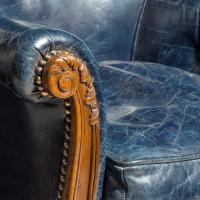 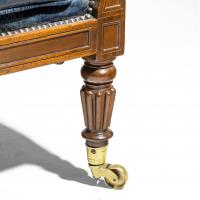 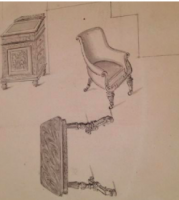 A Regency mahogany library chair by Gillows, the slender, shaped scroll back integral with the acanthus-carved scroll arms, the panelled seat rail set upon turned and reeded front legs and outswept back legs with similar decoration, all with brass castors, re-upholstered in distressed blue leather, inscribed in pencil ‘Cornwallis’. English, circa 1815.

The pencil mark ‘Cornwallis’ opens two intriguing avenues of research into the provenance of this chair. On the one hand, the main branch of the Cornwallis family were definitely Gillows’ clients. The Victoria and Albert Museum owns two1820s room settings for Earl Cornwallis (the fifth Earl, aka James Mann) in the Oxford St designs (see one of them above, not only with a similar chair but also with a Davenport behind). One is black and white for his town house in Hill Street, Mayfair, the other is in colour for his country seat Linton Park, Kent. On the other hand, Susan E Stuart in her book, Gillows of Lancaster and London, 1730-1840, Antique Collectors’ Club, Woodbridge, 2008 Vol I, pp.215-6, pls 192 and 193 illustrates ‘one of nine chairs c1810-26 from a set of eighteen to twenty. None of the chairs is stamped by the firm but all nine have a label ‘Lord Cornwallis’. She proposes ‘Admiral Sir William Cornwallis (1744-1819) who purchased a pedestal from Gillows of Lancaster via Ferguson & Co in 1818’ as an alternative candidate. These chairs are described under the heading ‘naval and neo-classical influences’, the present version has similar panelled decoration on the seat rail and front legs to the illustrated dining chair, and it was bought within a few miles of Newlands Manor, Hampshire, home of Admiral Sir William. Admiral Sir William Cornwallis, GCB (10 February 1744 – 5 July 1819) was a Royal Navy officer with a long and distinguished career. He was the brother of Charles Cornwallis, the 1st Marquess Cornwallis. He served in North America, the Mediterranean, West Africa, the West Indies and the English Channel. In 1780 he brought Captain Horatio Nelson home to Britain to recover from an injury and remained his friend thereafter. His affectionate contemporary nickname from the ranks was Billy Blue and a sea shanty was written about him, reflecting the admiration of his men. He acquired Newlands Manor in the 1800s and, as a bachelor, invited his colleague Captain Whitby and his wife Marie Anna Teresa to keep him company there. Teresa Whitby drew the image of Newlands Manor shown above. (Pinnell, Country House History around Lymington, Brockenhurst and Milford-on-Sea. St Barbe Museum Lymington. 1987.) print of Newlands Manor, the home of Admiral Sir William Cornwallis, a subject of a grant-aided project of the Milford on Sea Historical Records Society.