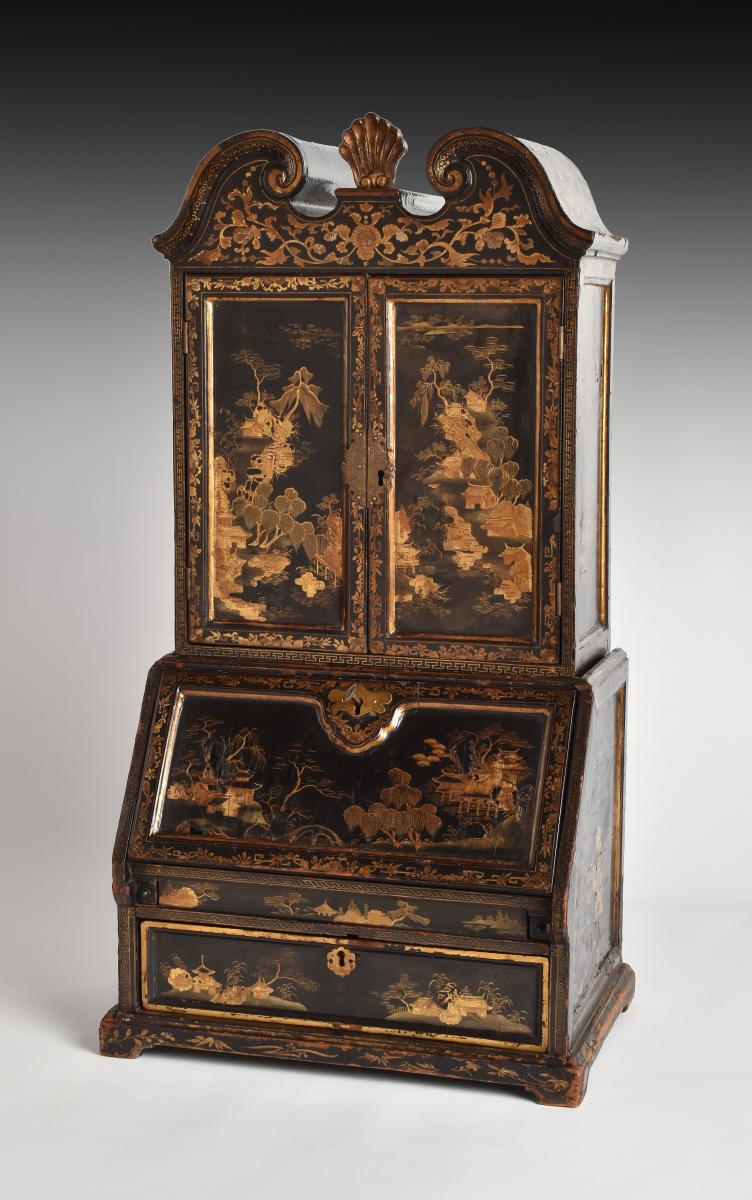 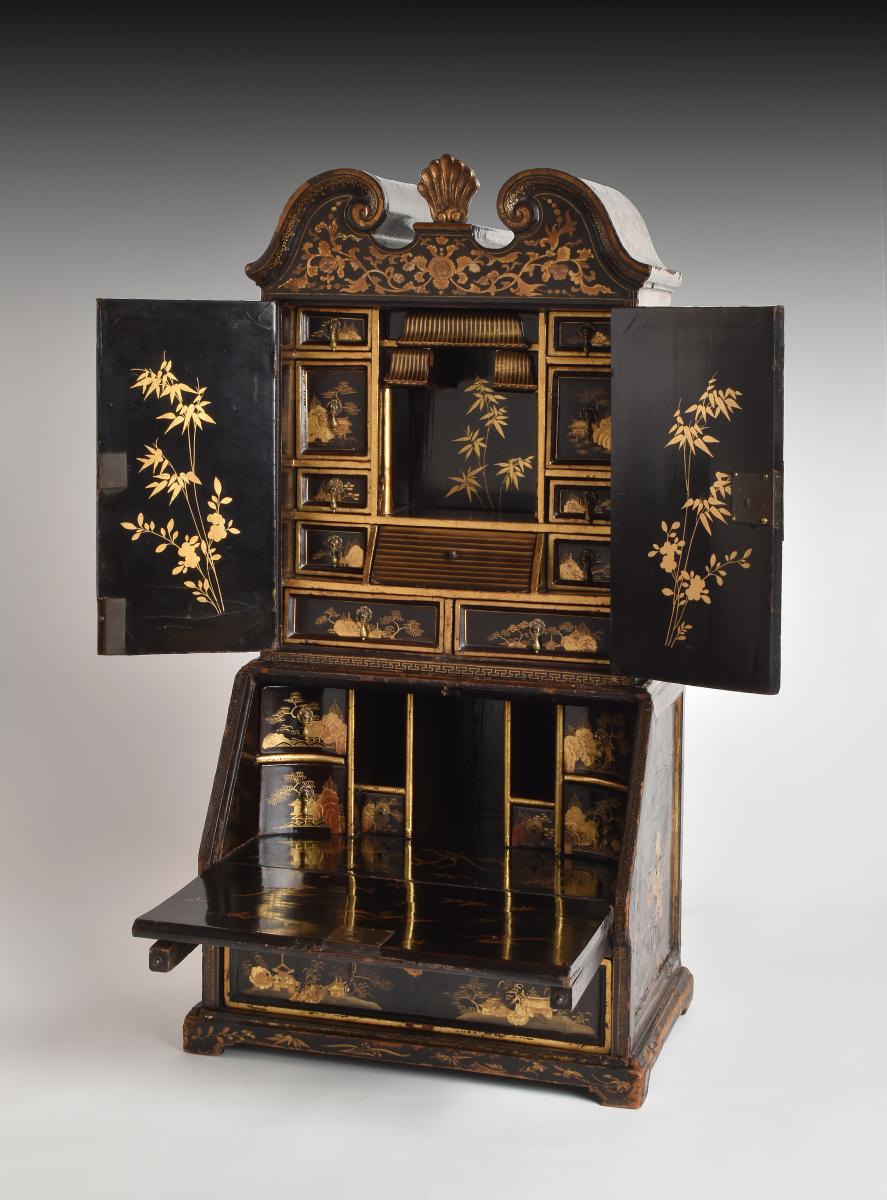 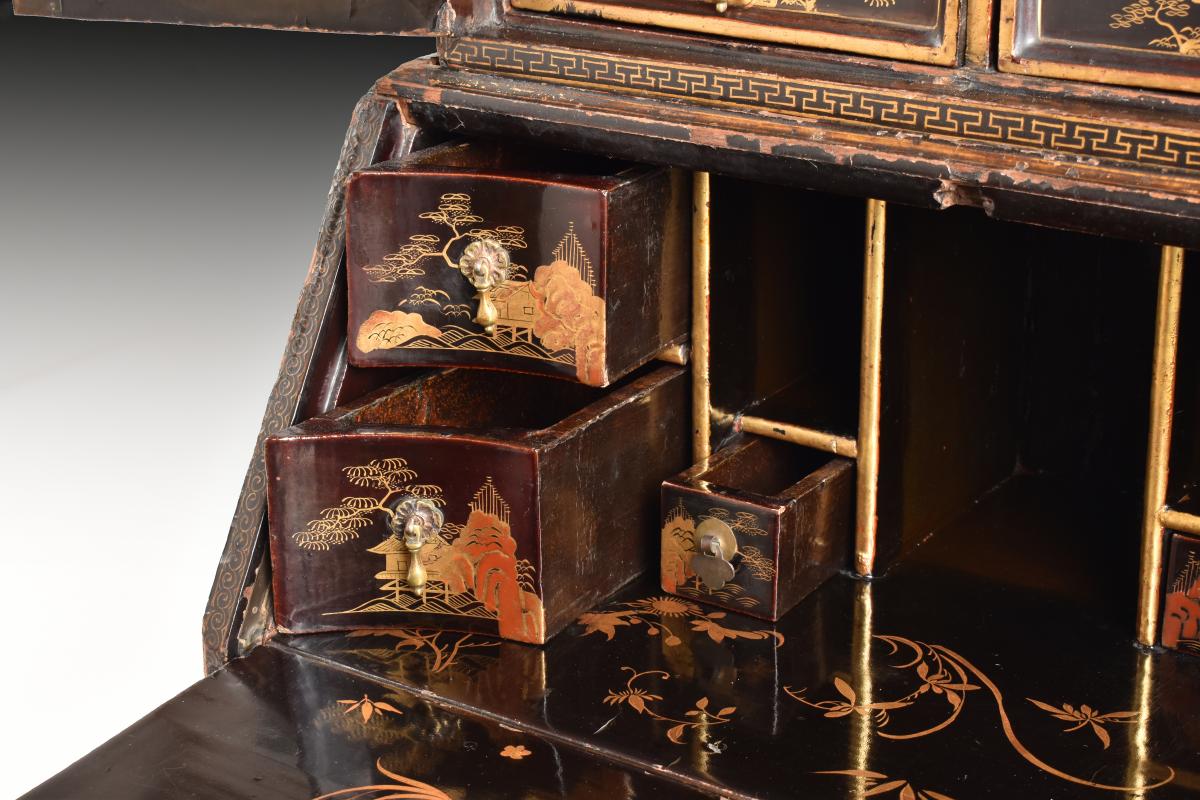 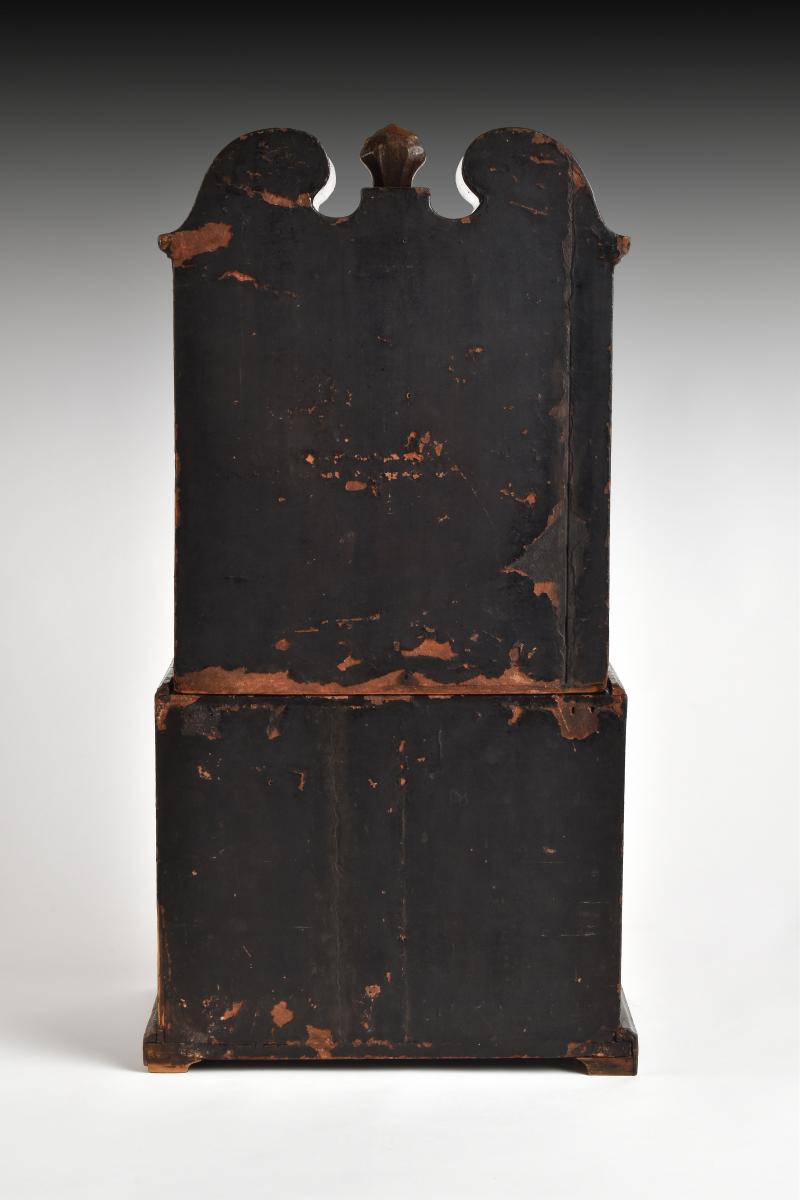 Constructed in two sections, the upper section with a pair of rectangular doors below a swan-necked pediment set with a central carved shell motif, enclosing an arrangement of fourteen drawers around a large central shelf forming a small temple, the lower section with a fall front supported on two pull-out lopers, revealing a fitted interior with an arrangement of three open pigeon holes and six drawers, the carcass fitted with one single drawer, all raised on bracket feet, decorated in black and gilt, with foliate scrollwork, bamboo sprays and classical Chinese landscapes, several of the drawers bearing Chinese numerals indicating their respective locations.

It is rare to find a miniature Chinese Export lacquer bureau based upon a full-sized original. An example of such full-size pieces may be seen in the Victoria & Albert Museum, London, museum number w.28:1 to 6-1935, (currently in store) illustrated and discussed by M.J. Jordan & R.Soame Jenyns, Chinese Export Art in the Eighteenth Century, London, Country Life Ltd., 1950.

Whilst the present bureau/cabinet appears to be the only known example of a miniature Chinese lacquer bureau for the Export market, John Ayers makes reference to a pair of Japanese miniature bureau cabinets in The Royal Collection, Chinese and Japanese Works of Art, In The Collection of Her Majesty the Queen, page 988, plate 2186, RCIN 26007.1-2.a-b, dated to the second half of the 18th Century. They were originally at the Royal Pavilion, Brighton, which George IV decorated in a lavishly Oriental style, and sent to Kensington Palace in 1848.

Ayers goes on to suggest 'a very similar, single-model bureau cabinet is published by Impey and Jorg 2005, pp.174-6, no.411 (private collection) Japanese Export Lacquer 1580-1850, with a different arrangement of the interior, with two lockable compartments surrounded by drawers behind the upper doors, and long drawers with simpler handles on the desk below……. At a somewhat earlier date, full-sized cabinets in this style were made in China for the Western market, both in hardwood and painted lacquer, and an example of the latter is in the Royal Collection…..It may be that these models were made as samples, with a view to extending the furniture trade to Japan, although no larger example is known.'