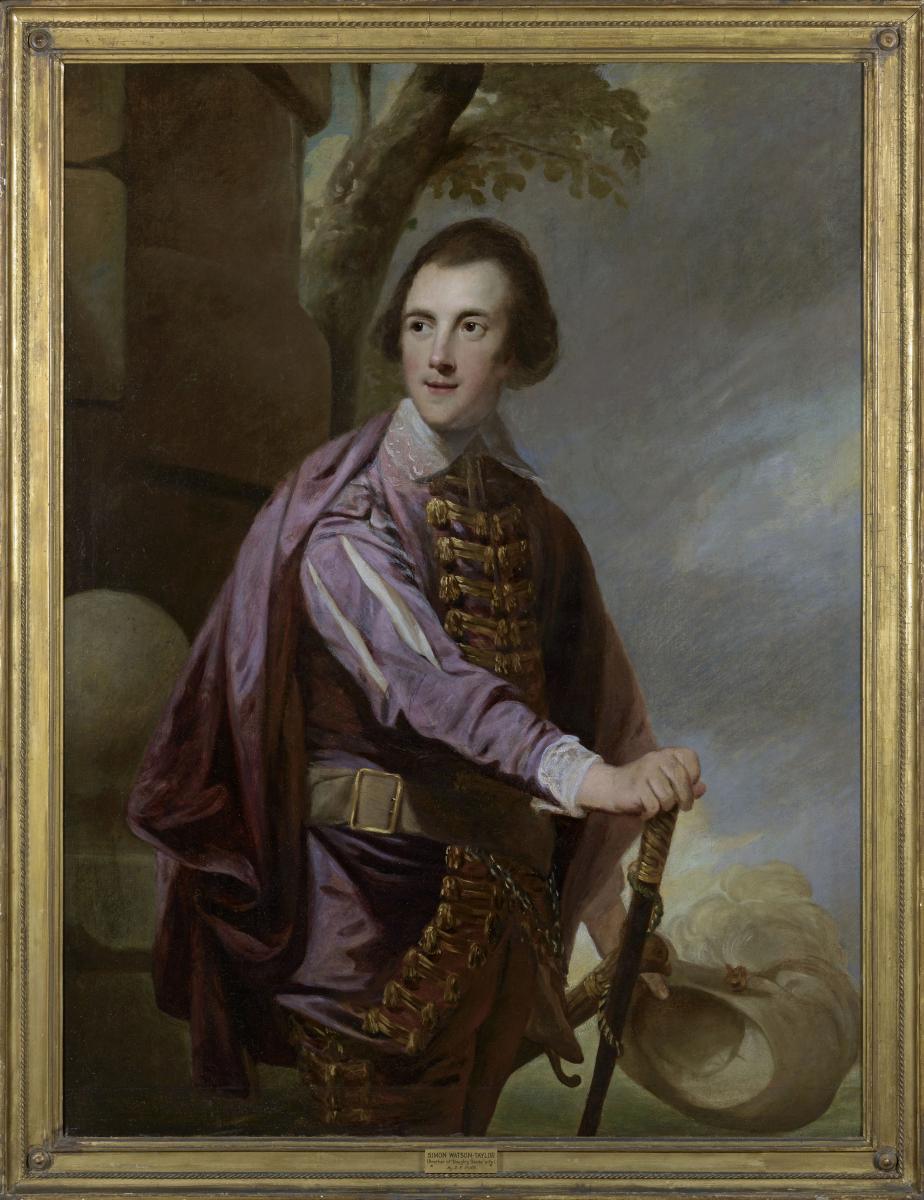 Oil painting on canvas 50 x 40 inches, and contained in its original carved and giltwood frame

Sir John Taylor was born in Jamaica in 1745, the son of Patrick and Martha Taylor. His father was a successful attorney and merchant who had emigrated to Jamaica from Borrowfield, south-west of Aberdeen.

The details of Taylor's schooling are obscure, but in March 1761 he matriculated at St John’s College, Oxford, graduating MA on 28th June 1764.

The precise date of Taylor's departure for the Grand Tour is not recorded , but he is documented as arriving in Capua 7th January 1773; he is also recorded in Naples, Florence and Rome, where he bought a landscape painting by Richard Wilson and was painted by Zoffany.

Piranesi dedicated a plate to him in his Vasi Candelabri, Cippi published in 1778. This was also the year he married Elizabeth Godden Haughton, herself the daughter (and heiress) of a Jamaican plantation owner; he was also given a baronetcy in this year. His sister Anne Taylor married as his first wife Robert Graham (later Robert Bontine Cunninghame-Graham (1735-1797)).

Sir John Taylor's elder brother Simon (1740-1813) was a leading attorney in Jamaica, acting for many of the larger absentee landlords and proprietors, and a member of the legislative assembly. He was amongst the wealthiest men of his age in the colony. He was member for Kingston in the Jamaican Assembly, 1763-81, and for St. Thomas in the East, 1784-1810; Custos; Chief Justice of the Court of Common Pleas; and Lieutenant Governor of militia. His correspondence with his brother Sir John is preserved and affords important insights into colonial life during the period leading up to the Napoleonic Wars and the Abolition of Slavery. It also records Simon's chagrin at doing most of the family work whilst his brother spent most of the family money.

Taylor has expressed a desire to marry Elizabeth Godden Haughton, daughter of Philip Haughton and Mary Brissett of Jamaica, and step-daughter of Jamaican landowner Neil Malcolm as early as 1774, but the marriage had been opposed by her family on the grounds that his life was certainly spendthrift and perhaps dissolute. The marriage did, however, take place four years later on 17th December 1778. There were four children of the marriage, their son Sir Simon Richard Brissett

Taylor (named after the father's elder brother) succeeding to the baronetcy in 1788. Sir Simon died in 1813 without male issue, when the title became extinct.

Sir John was elected to the Dilettanti Society in 1776, having been proposed by Kenneth Mackenzie,(1744-1781) the 1st and last Earl of Seaforth FRS of the second creation (himself elected in 1766). He was elected a Fellow of the Royal Society on 9th May 1776.

Sir John Taylor died on a visit to his family and estates in Jamaica in 1786; his wife returned to England where she died in 1821.

Robert Edge Pine was born in London, the son of John Pine (1690–1756), an engraver. John Pine's other children were Simon (d. 1772), a miniature painter, Horace (1731–1770), Charlotte, and another daughter whose name is unknown and who married the painter Alexander Cozens. Nothing is known of Robert Edge Pine's early years, although it is presumed he would have received some instruction from his father. On 23 December 1749 he married Mary Fulford at the church of the Holy Sepulchre, Holborn, London. They had four known daughters, Elizabeth, Anne Charlotte, Rose, and a Miss J. He seems to have painted from the beginning the range of subject matter that he continued to use throughout his life: history paintings, theatrical subjects, and portraits. One of his earliest works was Thomas Lowe and Mrs Chambers as Captain Macheath and Polly, engraved in mezzotint by James McArdell in 1752. Pine was active in the Society of Arts and was on the committee of polite arts. In March 1759 he proposed to the society that it hire a room for exhibitions of the works of ‘the present painters and sculptors’  one of the moves that led to the foundation of the Society of Artists in 1760.

Pine exhibited at the Society of Artists from 1760 to 1771, and at the Free Society of Artists from 1761 to 1763. Among his paintings exhibited in these years were George II (1759; Audley End, Essex), The Earl of Northumberland Laying the Foundation Stone of Middlesex Hospital (1761; Middlesex Hospital, London), and Mrs Yates as Medea (1770). In 1759 John Hamilton Mortimer became his pupil. Both artists through the 1760s were actively involved with the Society of Artists and sat on various of its committees. It is likely that Pine's radical political views were encouraged through the contacts he had made in the Society of Arts, for example with the republican Thomas Hollis, and in certain sections of the Society of Artists. Pine's republican sympathies led him to paint the portraits John Wilkes (1768; Palace of Westminster, London), Richard Oliver (1771; Guildhall Art Gallery, London), and Brass Crosby (1771; Daily Telegraph, London), the subjects of the last two being imprisoned in the Tower of London at the time for supporting the publication of parliamentary debates.

During the 1760s Pine was one of the leading portrait painters in London. On 5 October 1771, after a quarrel with the Society of Artists and probably its president, James Paine, over an unknown ‘insult’ he erased his name from the society, and although the case dragged on his resignation was eventually accepted on 22 June 1772; he never exhibited there again. Pine exhibited at the Royal Academy in 1772, 1780, and 1784. In 1772 his brother Simon died and Pine moved to Bath, where he lived for eight years, for some of this time in close proximity to his nephew, the watercolour painter John Robert Cozens. Pine's address in Bath from at least 1775 to 1779 was at Cross Bath in the parish of St Peter and St Paul.

Pine continued to paint portraits, including one of David Garrick, exhibited at the Royal Academy in 1780 (possibly the version now in the Folger Shakespeare Library, Washington, DC). His republican views led him to support the cause of American independence and he came to know a number of supporters of America such as George William Fairfax, in Bath, a friend of George Washington, and Samuel Vaughan, a London friend of Benjamin Franklin. In 1778 he painted the allegorical picture America, now only known from an engraving by Joseph Strutt of 1781. He also held an exhibition of his work in the great room at Spring Gardens, London, in 1782, which included a series of Shakespearian scenes, an ambitious work which anticipated John Boydell's Shakspeare Gallery.

Following his political convictions, Pine decided to go to America and was settled in Philadelphia by August 1784. In the same year he wrote, ‘I think I could pass the latter part of my life happier in a Country where the noblest Principles have been defended and establish'd than with the People who have endeavoured to subdue them’. By 27 October 1784 Pine had opened a gallery in the state house, Philadelphia, with paintings he had brought from England. A Descriptive Catalogue of Pictures Painted by Robert Edge Pine, produced by Francis Bailey, a local printer, in the same year, lists America and about ten Shakespearian pictures, including illustrations to Lear, Hamlet, Macbeth, The Tempest, and As You Like It, and also a picture of Boadicea. These paintings were destroyed by fire in Daniel Bowen's Columbian Museum in Boston, in 1803, after Pine's death.

Pine continued to paint portraits in America. With letters of introduction from the writer and composer Francis Hopkinson and the lawyer and writer Thomas McKean he stayed from 28 April to 16 May 1785 at Mount Vernon, where he painted George Washington. He sometimes travelled to the south for portraiture, painting faces on small canvases which were later incorporated into larger ones and completed in his studio. He also painted, with Edward Savage, Congress Voting Independence (Historical Society of Philadelphia, Pennsylvania), and three other untraced pictures of the American War of Independence.