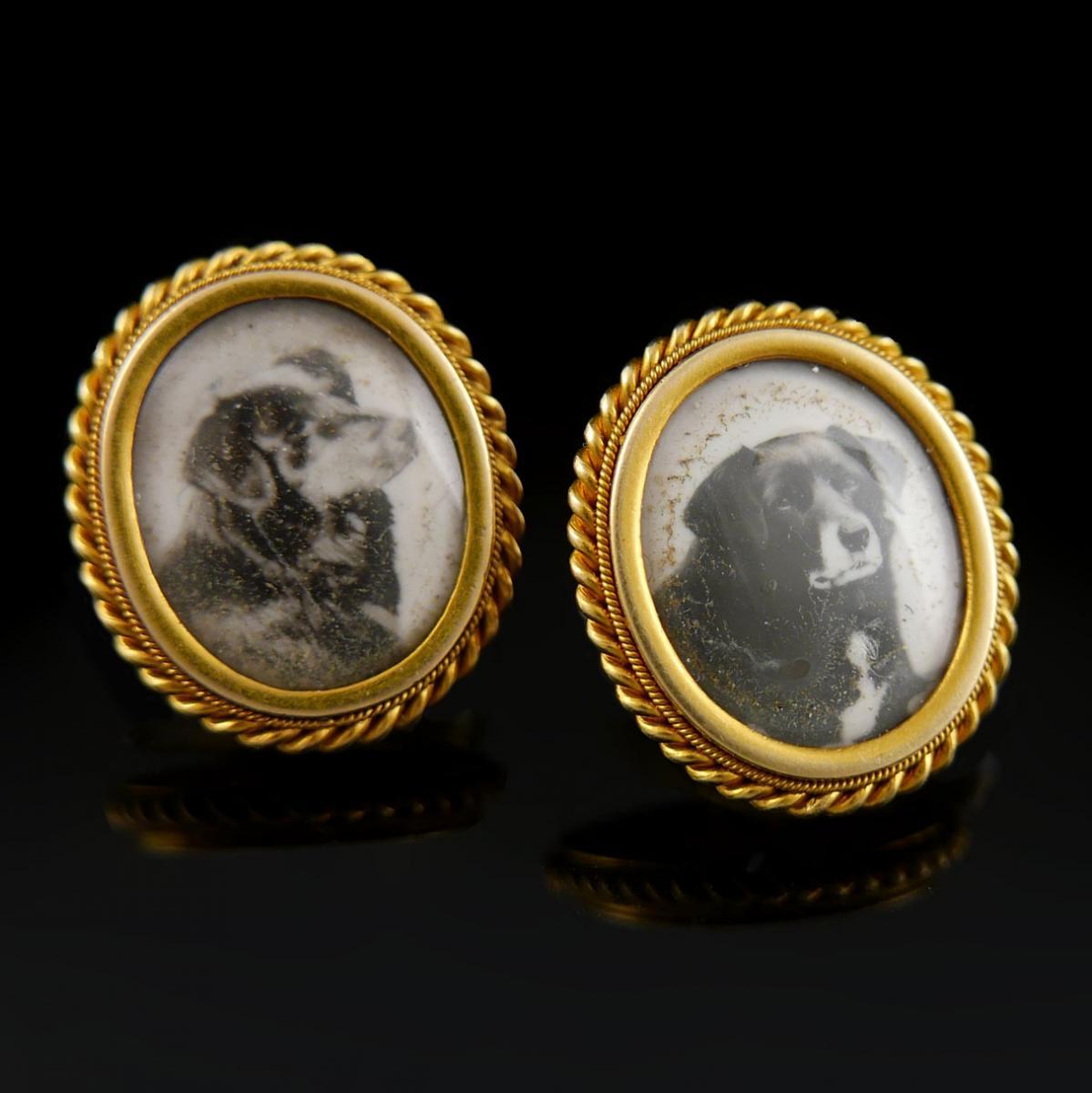 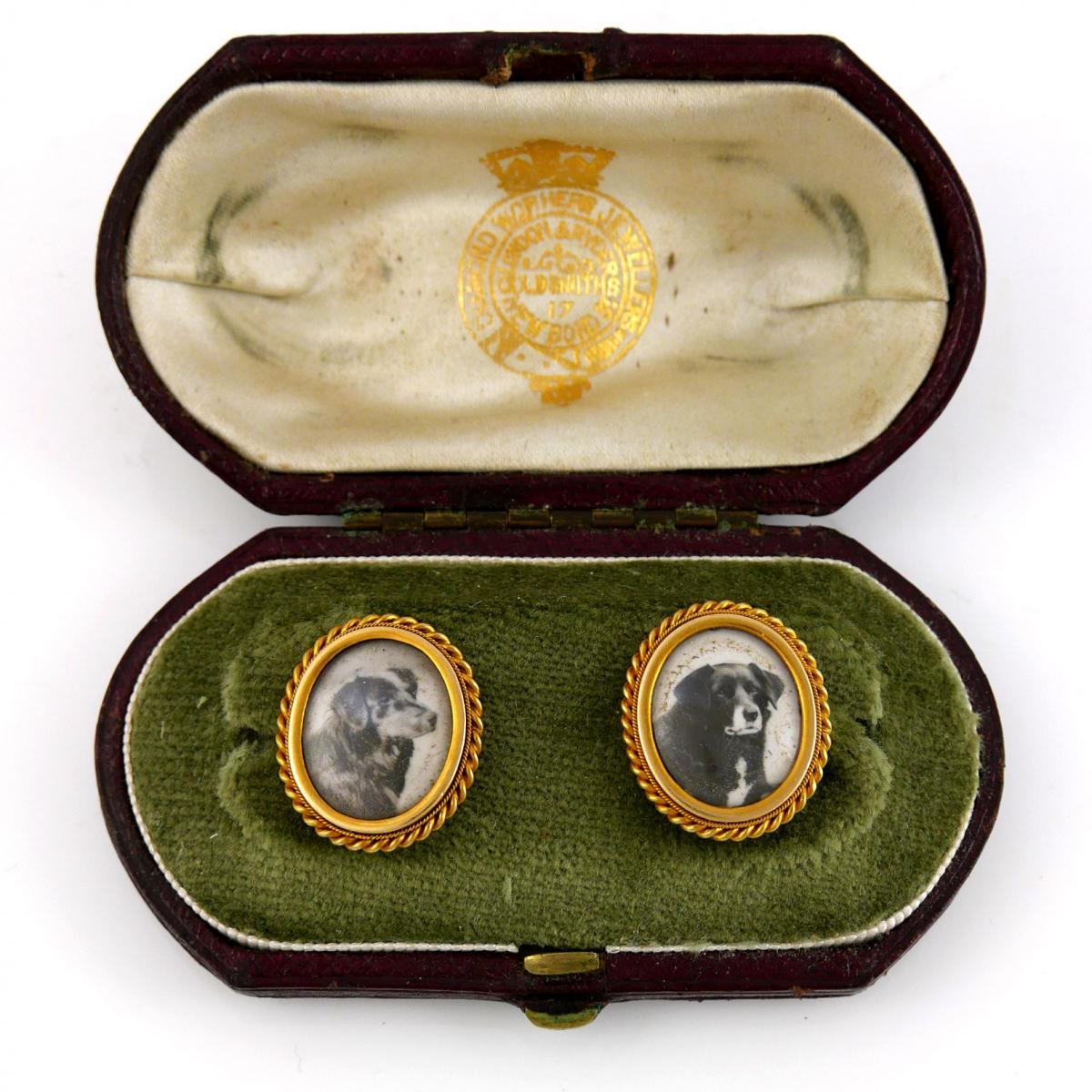 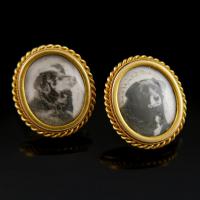 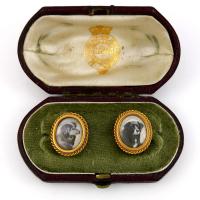 Gold and albumen print photographs. In the form of glazed miniature oval portrait photographs of two of Queen Victoria’s favourite dogs each contained within gold rope-twist borders. The reverse of one engraved 'Noble 1874’, and the other 'Sharp 1874’. Attributed to Royal photographers Hill & Saunders of Porchester Terrace, Bayswater. Cased.

Commissioned by Queen Victoria, these unusual dress studs were presented to her Highland Attendant Francis Clark. From the photographs in the Royal Collection it is clear Clark’s duties extended to looking after numerous royal dogs. Queen Victoria was a noted dog lover who owned eighty-eight dogs during her lifetime.

She had a particular fascination with collies which were then little known beyond the farms of the Scottish Borders. In appearance Sharp and Noble differed most noticeably from the modern breed standard by their old fashioned ‘tag’ ears. Both dogs were buried with considerable ceremony. Queen Victoria fervently believed that the higher animals had souls and when they died would go to a future life; they should therefore, in her view, be mourned just like humans.

Sharp (1864-1879) was acquired in 1866 and became the constant companion of the widowed Queen. Said to be named after a Government minister of the day, Sharp ate his meals regularly with the Queen and was fiercely protective of her. However he was generally considered badly trained and bad tempered by all but the redoubtable John Brown.

Sharp accompanied the Queen to all the royal residences and at Balmoral received mention in her Journal: ‘Friday, September 27. Dear good Sharp (a favourite collie of mine) was with us and out each day, and so affectionate… / Wednesday, September 1, 1869.

We got up at half-past seven...and at half-past eight left Balmoral...for Ballater...with Sharp (my faithful collie dog)… / Monday, September 6. At five minutes to eleven rode off with Beatrice, good Sharp going with us and having occasional 'collie-shangies' [dog fights] with collies when we came near cottages.’

Sharp lived for fifteen years and was buried in Windsor Home Park beneath a large recumbent portrait bronze mounted on a stone plinth inscribed, ‘Sharp, the favorite and faithful Collie of Queen Victoria from 1866 to 1879. Died now 1879 aged 15 years’

Noble III (1872-1887) was given to Queen Victoria at Balmoral on 24 May 1872. He was better natured than Sharp and had the special role of guarding the Queen's gloves. He too featured in the Journal: ‘Tuesday, September 9, 1873. Got up at ten minutes to seven...The morning was splendid... I left Balmoral with Beatrice...for Ballater...We had our own comfortable train...and Francie [Clark] with dear Noble (another favourite and splendid collie), with Brown next to me. Sunday, September 14. ...Dinner as usual. My favourite collie Noble is always downstairs when we take our meals, and was so good, Brown making him lie on a chair or couch, and he never attempted to come down without permission, and even held a piece of cake in his mouth without eating it, till told he might. He is the most 'biddable' dog I ever saw, and so affectionate and kind; if he thinks you are not pleased with him, he puts out his paws, and begs in such an affectionate way.’

Noble sired at least one litter of puppies by a bitch supplied by Susanna, Duchess of Roxburghe. He was painted by Carl Schmidt and reproduced as a lithograph by Hill & Saunders. Like Shatp, Noble was memorialized with a bronze potrait marking his burial place at Balmoral.

Francis Clark (1841-1895) was born at Aberdarder and entered service of Queen Victoria as Highland Attendant about 1870. He was a nephew or cousin of Queen Victoria’s favourite John Brown and was assisted in his duties with by John’s brother Hugh Brown (1838-1896). On John Brown’s death Clark succeeded him as ‘The Queen’s Highland Servant’.

Clark was photographed with Noble, probably in the grounds of Windsor Castle, together with another of Queen Victoria's collies, Fern, a dachshund called Waldmann VI, and Princess Beatrice's fox terrier, Wat. Noble, Fern and Waldmann were frequently exercised on the Balmoral estate by Clark. He received the Victoria Faithful Service Medal in 1891 for twenty-one years. He died at Buckingham Palace on 7 July 1895 and was buried at Braemar. 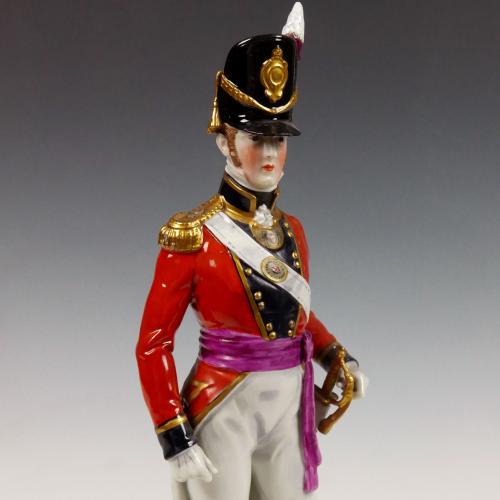 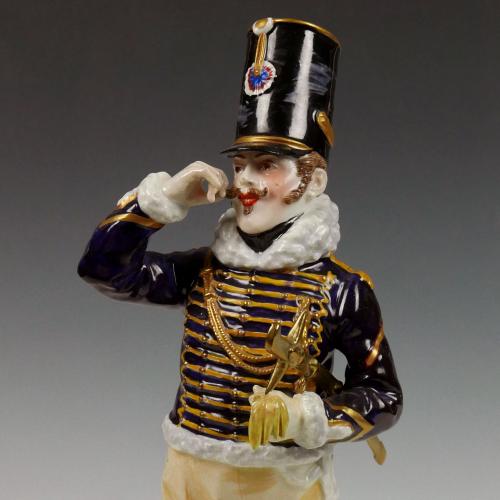 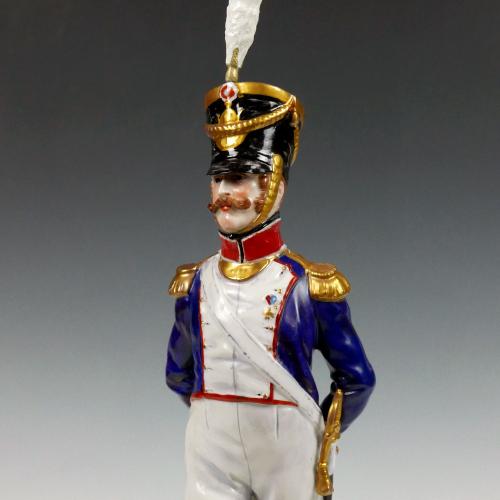 Capitaine de la Garde Nationale, 1812
The Armoury of St. James's
View all from this dealer