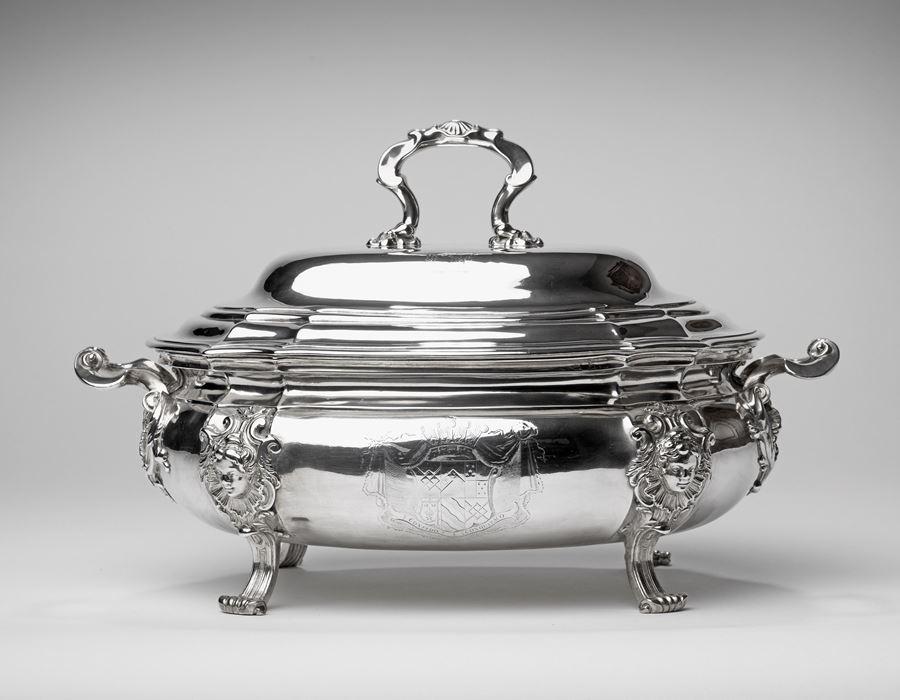 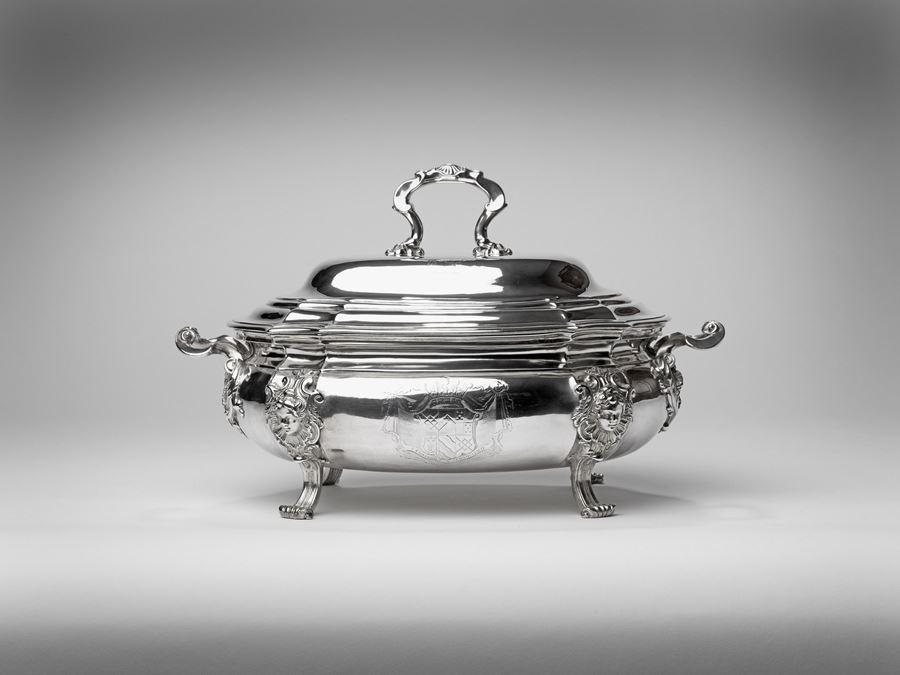 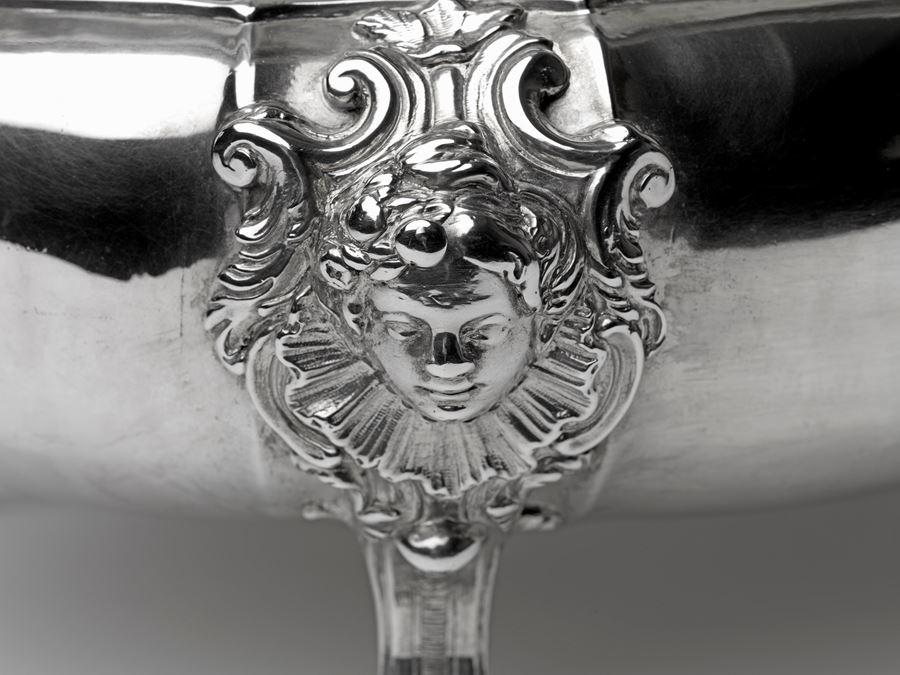 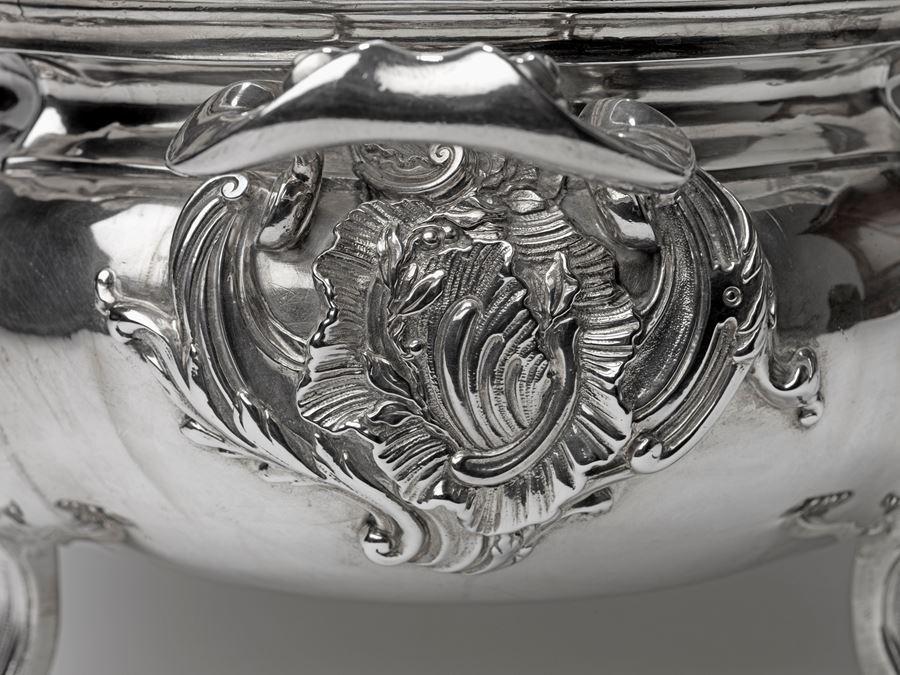 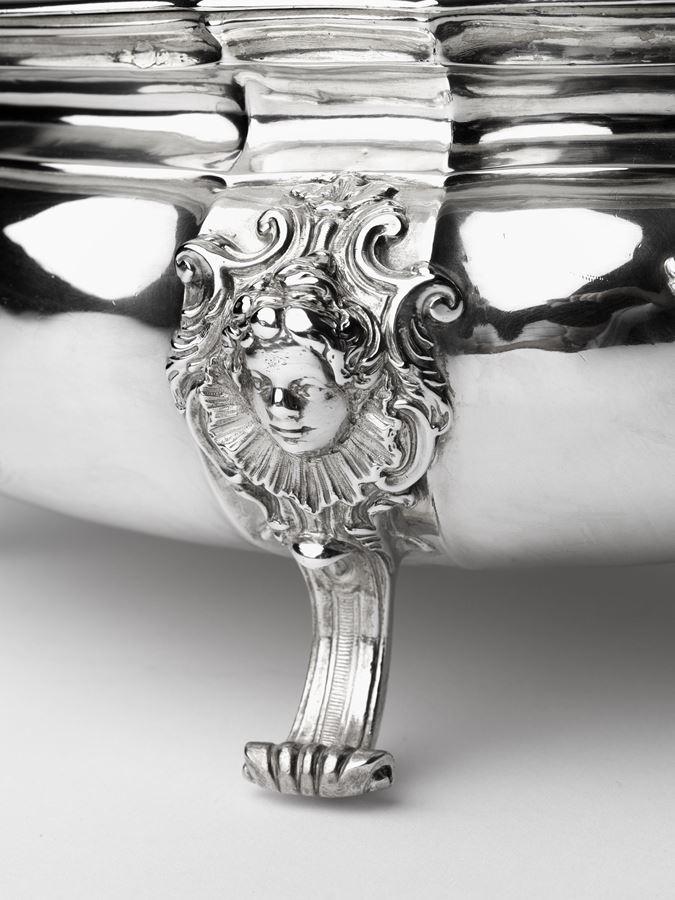 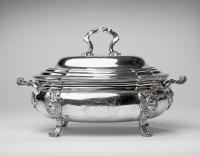 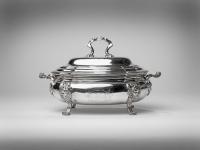 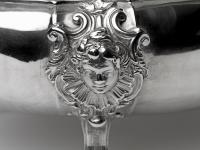 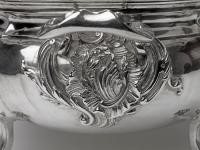 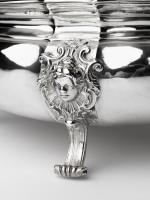 The arms are those of Tollemache quartering Joyce, Stanhope, Murray and Wilbraham, for Lionel Tollemache, 4th Earl of Dysart K.T. (1708 – 1770)

Paul Crespin
Paul Crespin can be considered to be one of the most accomplished goldsmiths of the second quarter of the 18th century. Crespin was born in Westminster, the son of Huguenot parents. He was an apprentice to the Huguenot goldsmith Jean Pons in 1713, and his first registered marks appear between July 1720 and December 1721.

The fashion for French style and the highest levels of craftsmenship led many English patrons to buy directly from French goldsmiths, but Crespin successfully captured this style and quality in his own work which allowed him to prosper.

He was also unusual in England for adopting the Rococo style as early as the mid 1730s, when this soup tureen was created. Crespin incorporated Rococo elements directly from Parisian print sourcesCommissions were received from George II, including a christening bowl for his godson, George, third son of Lyonel Tollemache; the King of Portugal and Catherine the Great.

Perhaps his most outstanding creation is the centrepiece, made for Frederick, Prince of Wales in 1741, now in the collection of Her Majesty the Queen (E. Barr, George Wickes, Royal Goldsmith 1698 – 1761, 1980, fig. 103). Although recorded bankrupt in the Gentleman’s Magazine in February 1747, his mark is found on many pieces until his retirement in 1760.

Two years later in 1729 he was elected High Steward of Ipswich and in the same year married Lady Grace Carteret (1713 – 1755), daughter of John Carteret, Earl of Granville. Although he commissioned many new pieces for his houses he did not sweep aside the work of his ancestors. Both at Helmingham and Ham he renovated and refurbished, adding to the existing collections, in many cases in an antiquarian spirit.

As a young man he travelled extensively on the Continent visiting France, Switzerland and Italy. He spent little time in public life, and preferred to devote his efforts to his houses and collections. Dysart took particular interest in redecorating the Marble Dining Room, which led to an ideal opportunity to commission a complete dinner service along with sumptuous new furniture and pictures.

Over the span of twenty years beginning in 1729, Dysart built his entire dinner service, and this type of gradual accumulation of plate was common. Although bought over a long period, the dinner service is stylistically consistent in reflecting a restrained Rococo character with high quality finishes and engraved armorials.

Archival research by Elizabeth Jamieson and a study of the 4th Earl’s silver collection by Tessa Murdoch, of the Victoria & Albert Museum, reveal a meticulous record-keeper and dedicated patron.

Surviving pieces from the Earl’s collection and a treasure trove of silversmiths bills document the Earl’s taste for the finest work of the leading Huguenot goldsmiths of the day. Anne Tanqueray provided pieces for the dressing table, and her brother David Willaume supplied a chamber pot and a bread basket.

The tureen is almost certainly the one which is recorded in the Earl of Dysart’s Account book for the years 1733 to 1743 (Buckminster Park Archives, Mss 929). The entry dated 29 January 1742 lists,
‘to Crespin Sylver-
Smith (For a Terrine)
A bill on Child for
Threescore & Ten Pounds 70.